Police use array of strategies to keep officers engaged

News outlets are reporting a “crisis” in law enforcement across the United State. Reuters, the Associated Press, NPR, U.S. News and World Report and Reuters have all published stories in …

Police use array of strategies to keep officers engaged 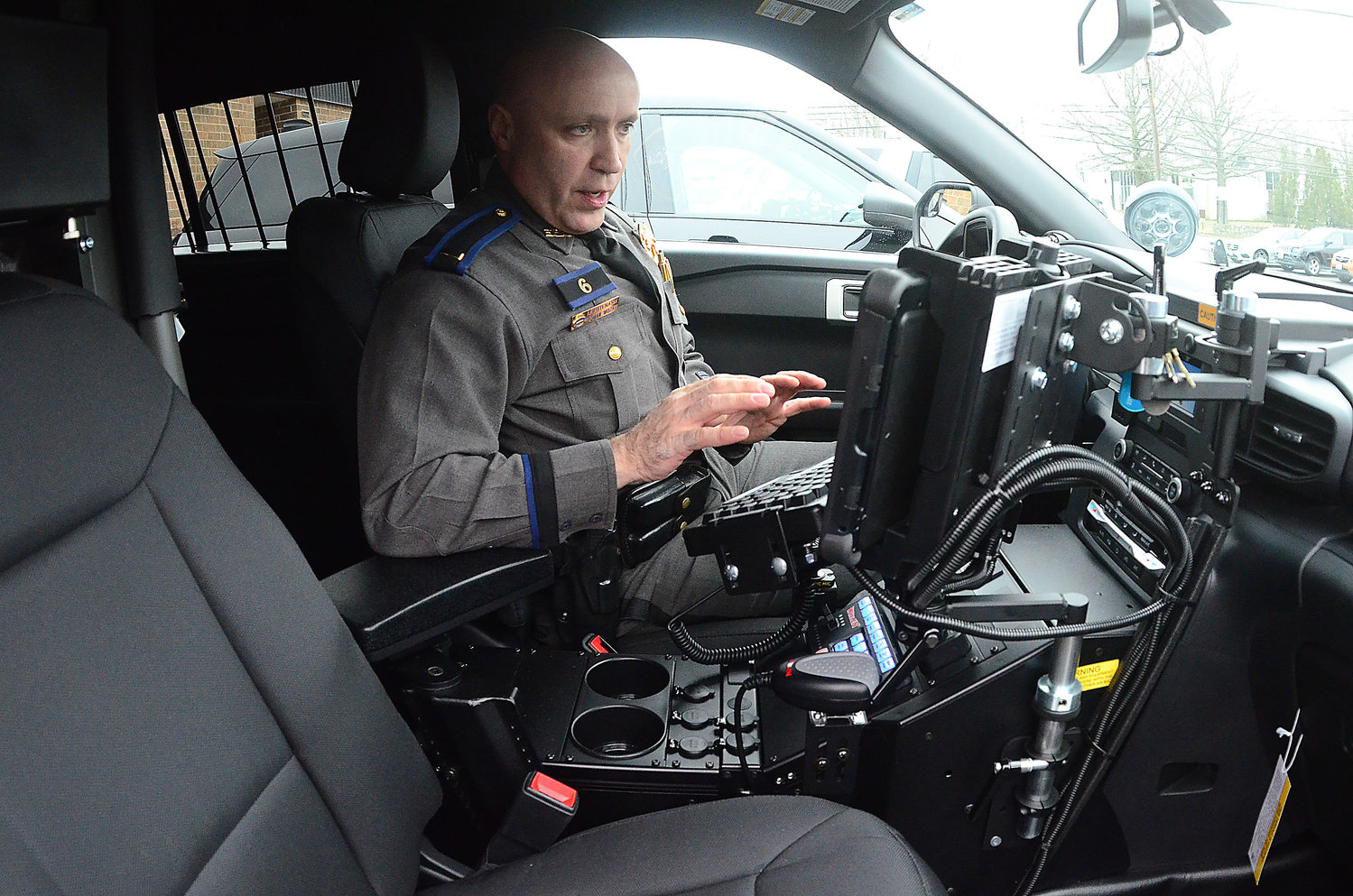 Police Lt. Roman Wozny demonstrates how to use some of the new technology in a marked Bristol vehicle. To keep officers engaged and committed to the job, the department attempts to provide the best equipment and tools they can. 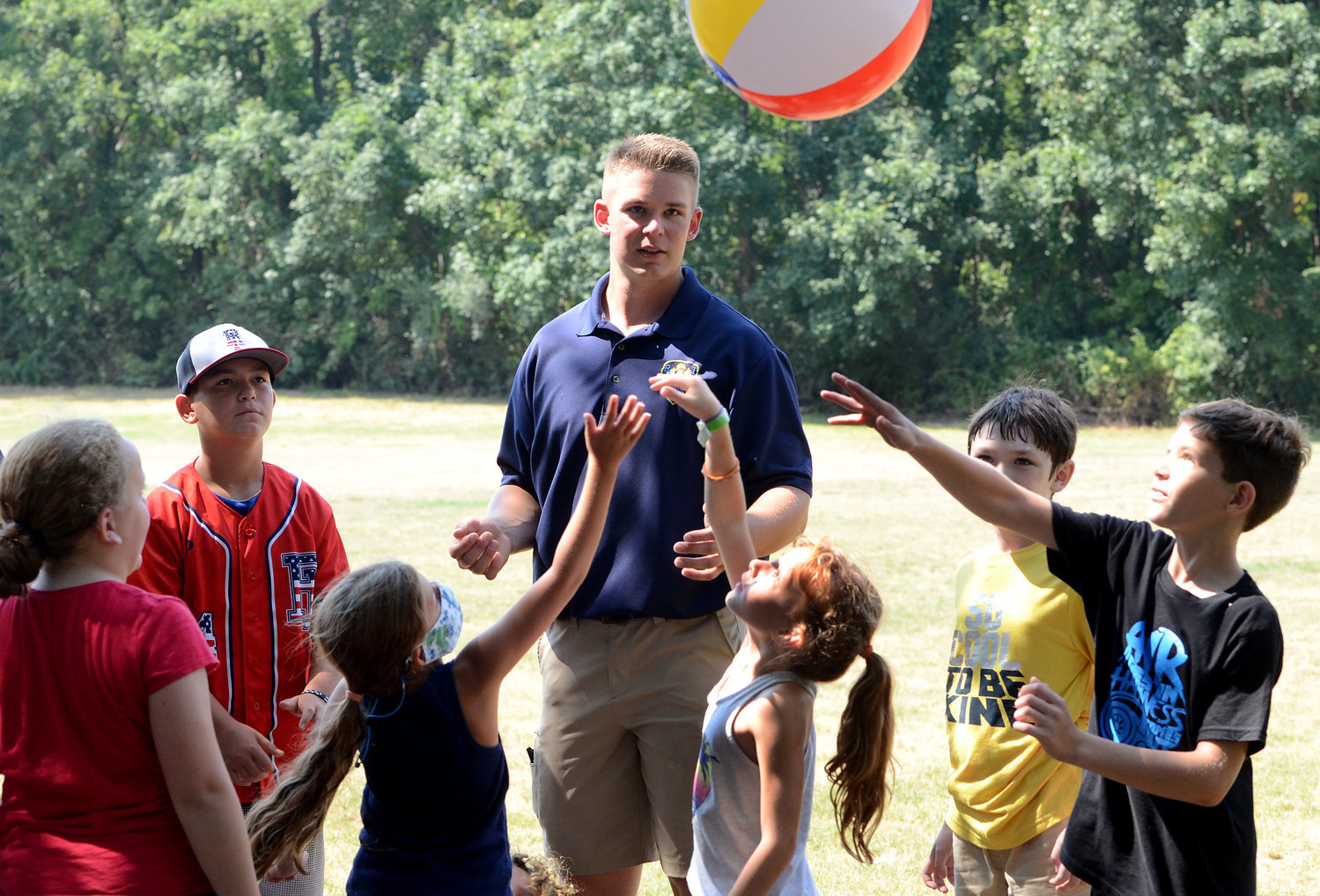 Bristol patrolman Joshua Munson plays a leadership-strategy game with the Blue Jays group, as they work as a team to try to keep the ball from reaching the ground, during a session in the department's annual Youth Leadership Camp. Community engagement and community policing are part of the department's strategy to create job satisfaction for officers. 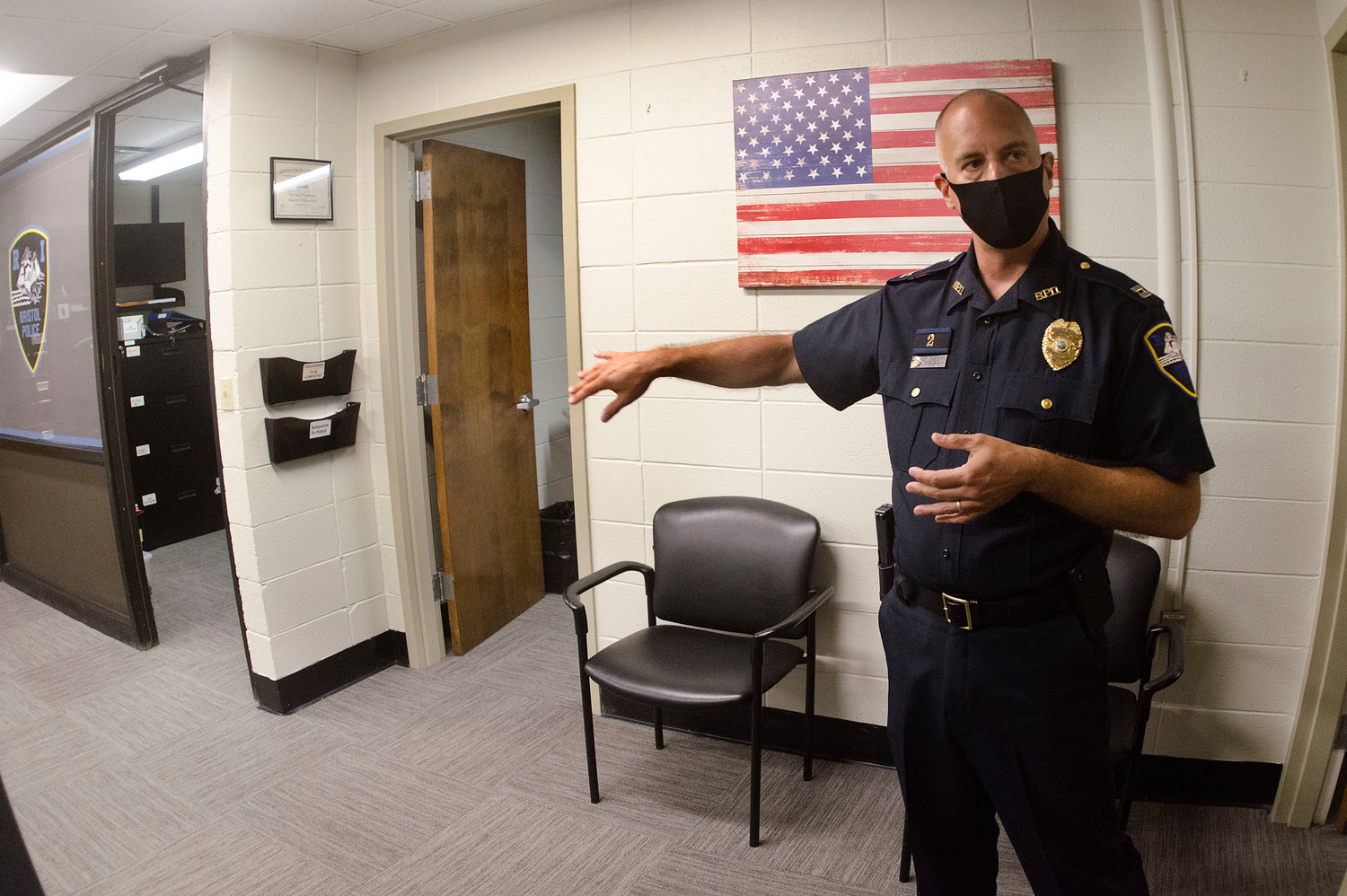 Major Brian Burke talks about some of the changes made to the Bristol Police Station during the pandemic. The department has been focusing on community engagement and department pride to keep officers motivated and committed to the job. 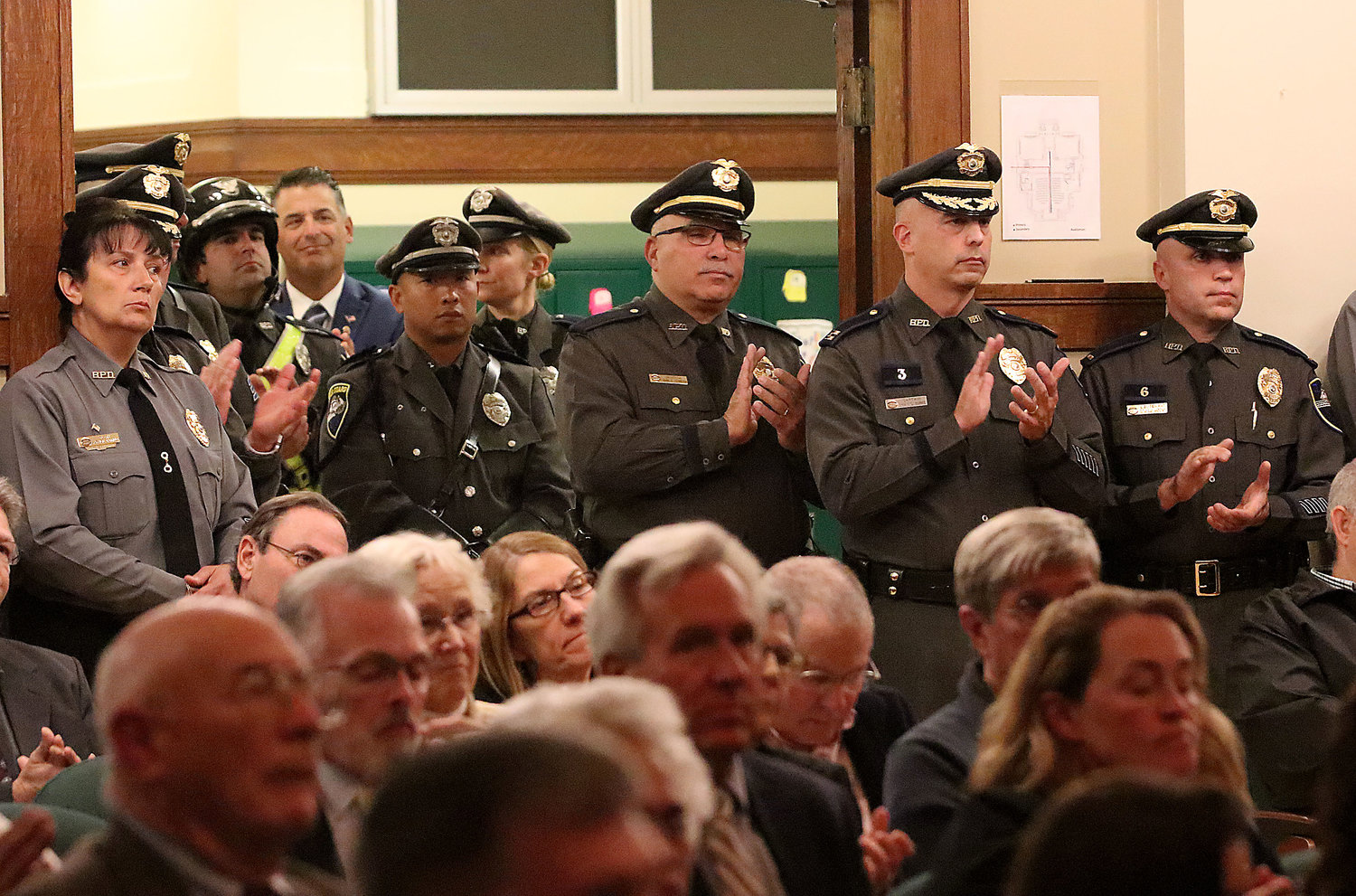 Bristol police officers applaud at the swearing-in ceremony for Chief Kevin Lynch, back in 2019.
Previous Next
Posted Friday, October 8, 2021 7:00 am

Years ago, when I joined the police force, we bragged about it. I was proud to be an officer. My family was proud to say, ‘my son’s a policeman.’”
Bristol Police Chief Kevin Lynch
By Scott Pickering

News outlets are reporting a “crisis” in law enforcement across the United State. Reuters, the Associated Press, NPR, U.S. News and World Report and Reuters have all published stories in recent months about staffing shortages, recruitment challenges and massive retirements that are thinning the police ranks nationwide.

The reports are also coming from sources outside the traditional media. The International Association of Chiefs of Police published a report, “The State of Recruitment: A Crisis in Law Enforcement,” showing that 78 percent of the nation’s 18,000 law enforcement agencies were having difficulty recruiting qualified candidates — and that was before the murder of George Floyd in Minneapolis, Minn. The climate has only gotten worse.

Bristol is not immune from the national trend, but it is also working to overcome it. Police Chief Kevin Lynch and his leadership team are aware of the challenges to both recruit and retain officers, and they’re deploying numerous strategies within the department.

“Years ago, when I joined the police force, we bragged about it,” Chief Lynch said. “I was proud to be an officer. My family was proud to say, ‘my son’s a policeman.’ Nowadays, there’s kind of a stigma out there, where the police are in this area of government, we call it the ‘crime control model,’ that police officers are only here to make arrests. I have tried to change that paradigm. We are shifting and molding the department to be a true community-based organization.”

The Bristol department works throughout the year to host and take part in community events. They’ve added a second school resource officer, turned Brody the K-9 officer into a star, and built Bristol’s reputation as one of the safest communities in New England.

All of the community activity helps improve perceptions, but it’s just one of the strategies. The department is also finding new ways to train, engage, incentivize and reward officers. A new, three-year contract that took effect July 1 includes stipends for every officer if the department maintains its national accreditation. The $500 accreditation bonus is paid every year. Officers also receive annual education bonuses — $250, $500 or $750 — if they have an associate’s, bachelor’s or master’s degree.

The department has an agreement with Roger Williams University, where officers can take law enforcement or criminal justice classes for free, and they receive compensatory hours from the department.

Chief Lynch and his team have also encouraged officers to seek out their own training opportunities, to become certified in an array of law enforcement specialties, or to advance their education in a number of ways. Two officers were specially trained on working with sexual crime victims, giving Bristol Police its own small Special Victims Unit (SVU).

“You have to be creative to keep these officers engaged,” said Major Brian Burke. “This job can be — I hate to use the word, ‘routine’ – but when you have someone who’s worked the job for 20 years, the last 10 years on the day shift, it can get very stagnant. So you have to be creative, and keep them happy, and get them involved in training opportunities, or maybe there’s a special school they want to go to.”

A generation ago, police officers would join a force, work their 20 years and retire with fully vested pensions, some in their early forties. That is no longer the case. Changes in the Rhode Island pension system in 2012 altered the landscape.

He said when he started in the department, turnover was a regular. Every 12 to 18 months, a veteran officer would retire, opening up a cascade of possible promotions, with patrolmen rising to become sergeants, sergeants to detectives, and detectives into department leadership. Now that turnover happens less frequently. “Now, you don’t see that same level of turnover,” Major Burke said.

To respond, the department tries to create internal “promotions” whenever possible, getting creative with personnel management.

And then there’s the pay

Chief Lynch said the bottom line is that police officers probably are not paid what they are worth. “The profession, as a whole, is probably not paid to where it should be,” he said during a recent interview in his office.

The department is deploying all the strategies mentioned above to keep officers happy and engaged, and they do even more. They try to provide the best equipment possible for the job, and they empower officers to go beyond just an initial incident investigation. Bristol patrol officers routinely respond to a situation, investigate it fully and bring it to a point of resolution. In other departments, a patrol officer might respond to a situation, provide a quick assessment and hand it off to someone else. The Bristol more on-the-job training and hopefully more job satisfaction.

Bristol PD: Bristolians not a fan of New Years fireworks