Mt. Hope soccer back to back wins moves Huskies into first place

The Mt. Hope soccer team notched two more victories last week, bringing their season record to 11-1-2, the best record in Division 2. The Huskies shut out Mt. Pleasant, 3-0, during a home game, then …

Mt. Hope soccer back to back wins moves Huskies into first place 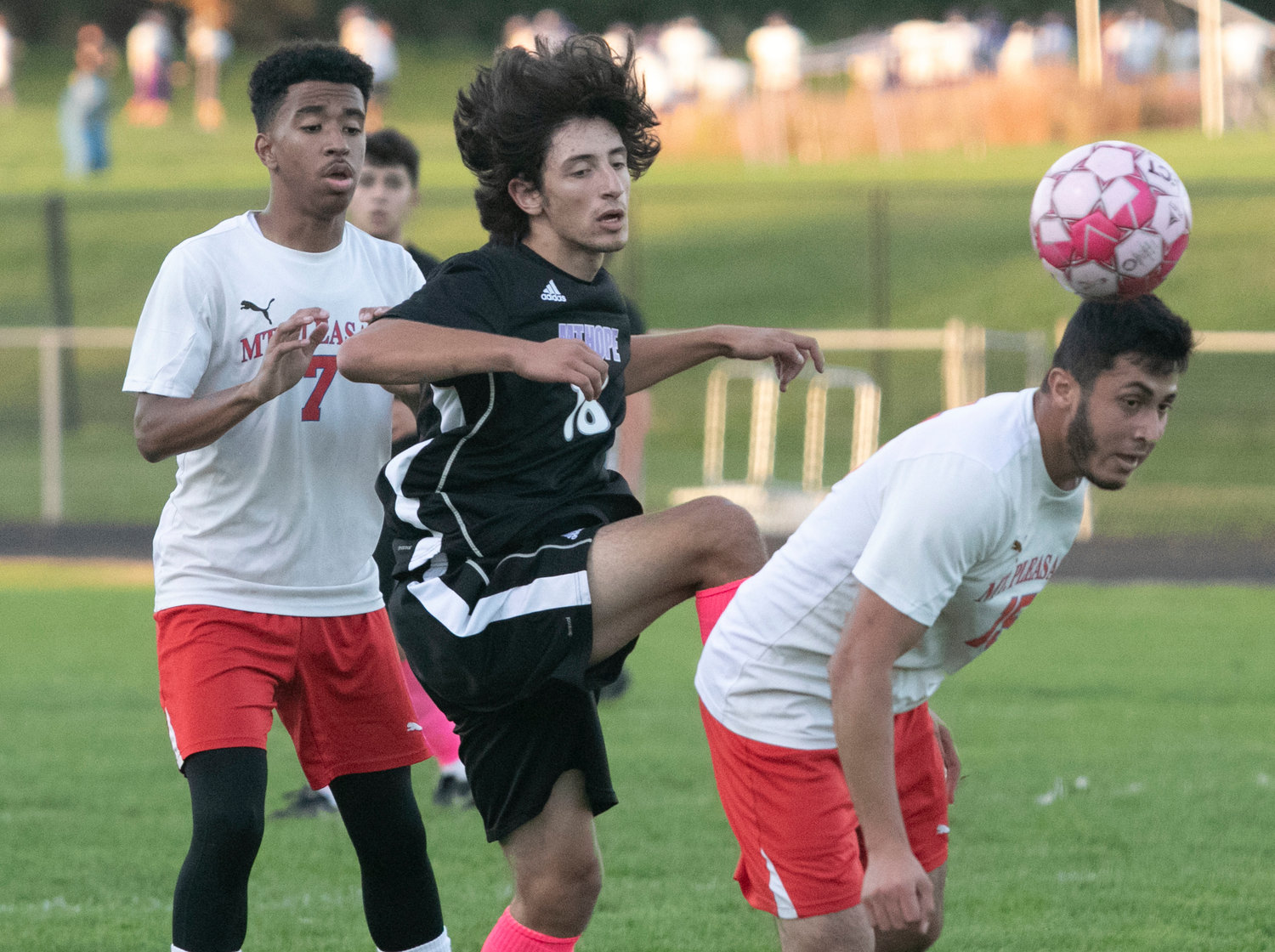 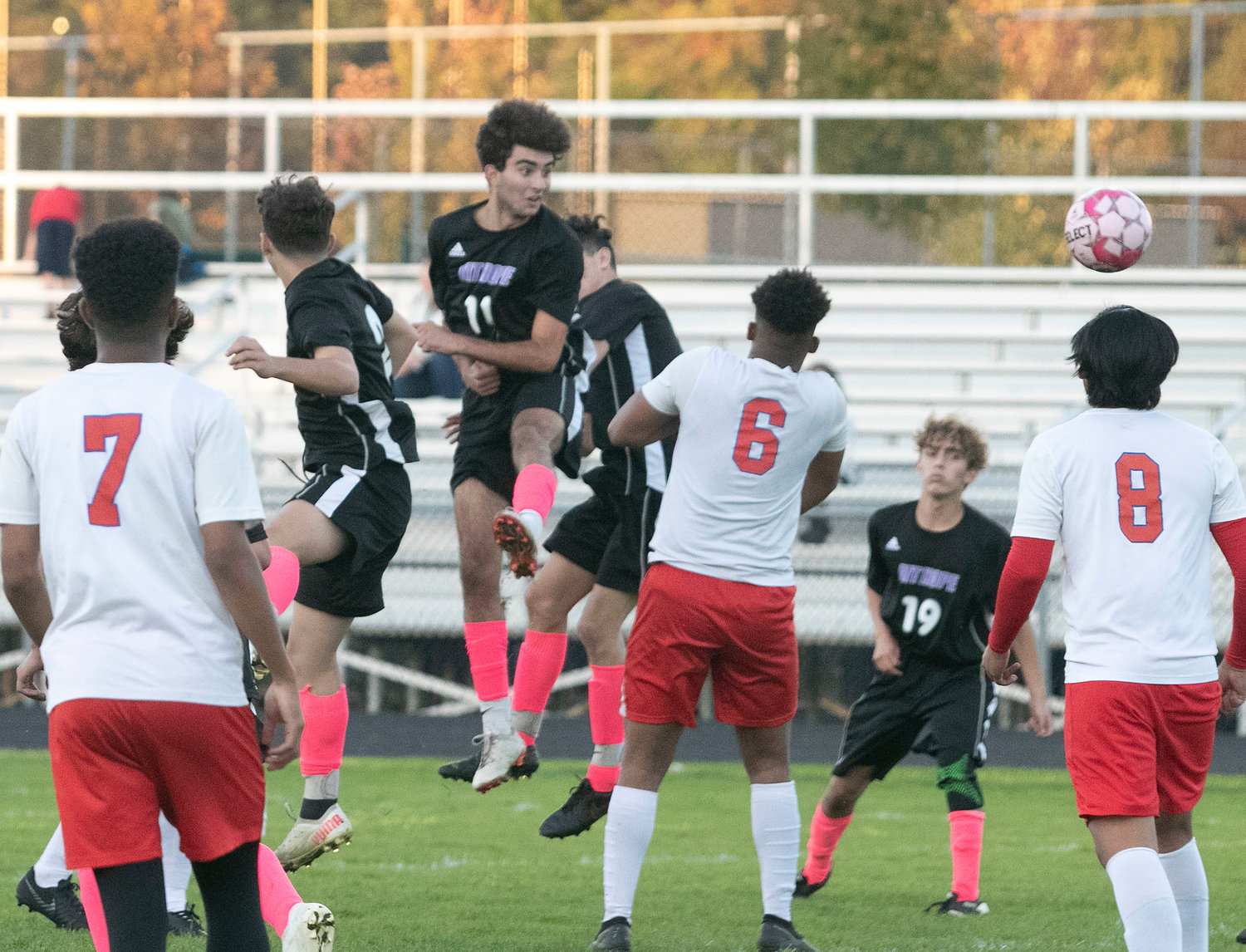 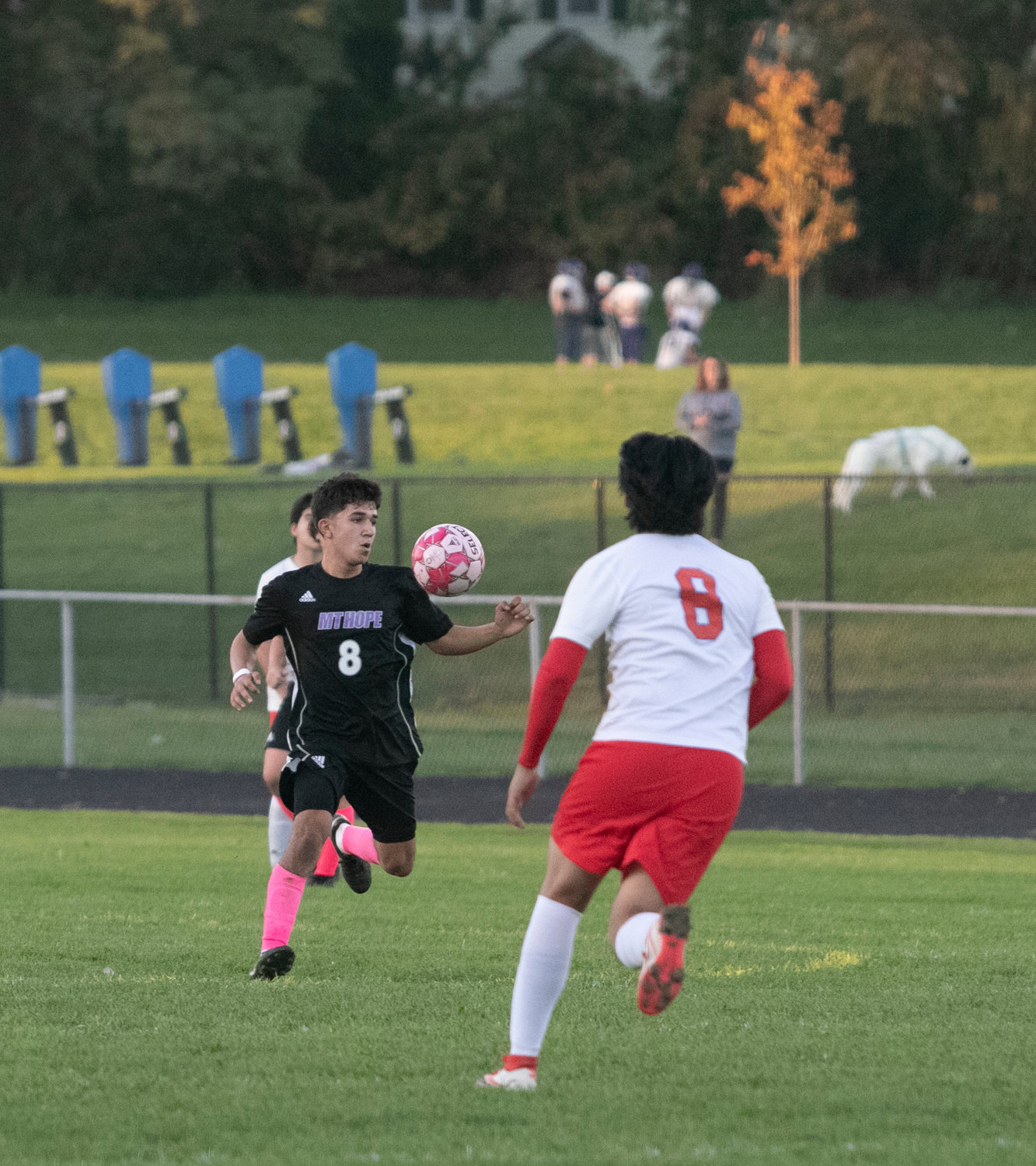 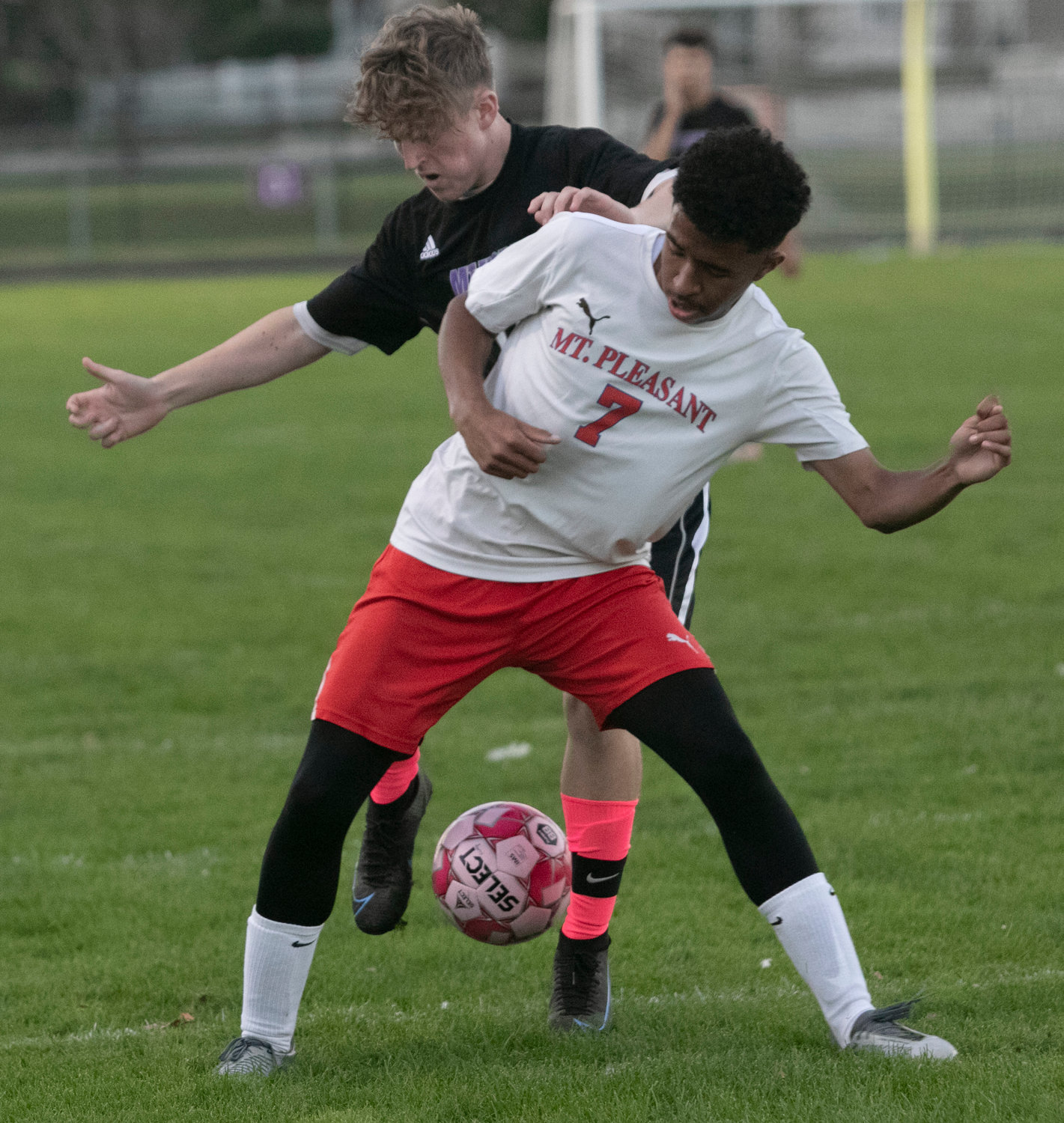 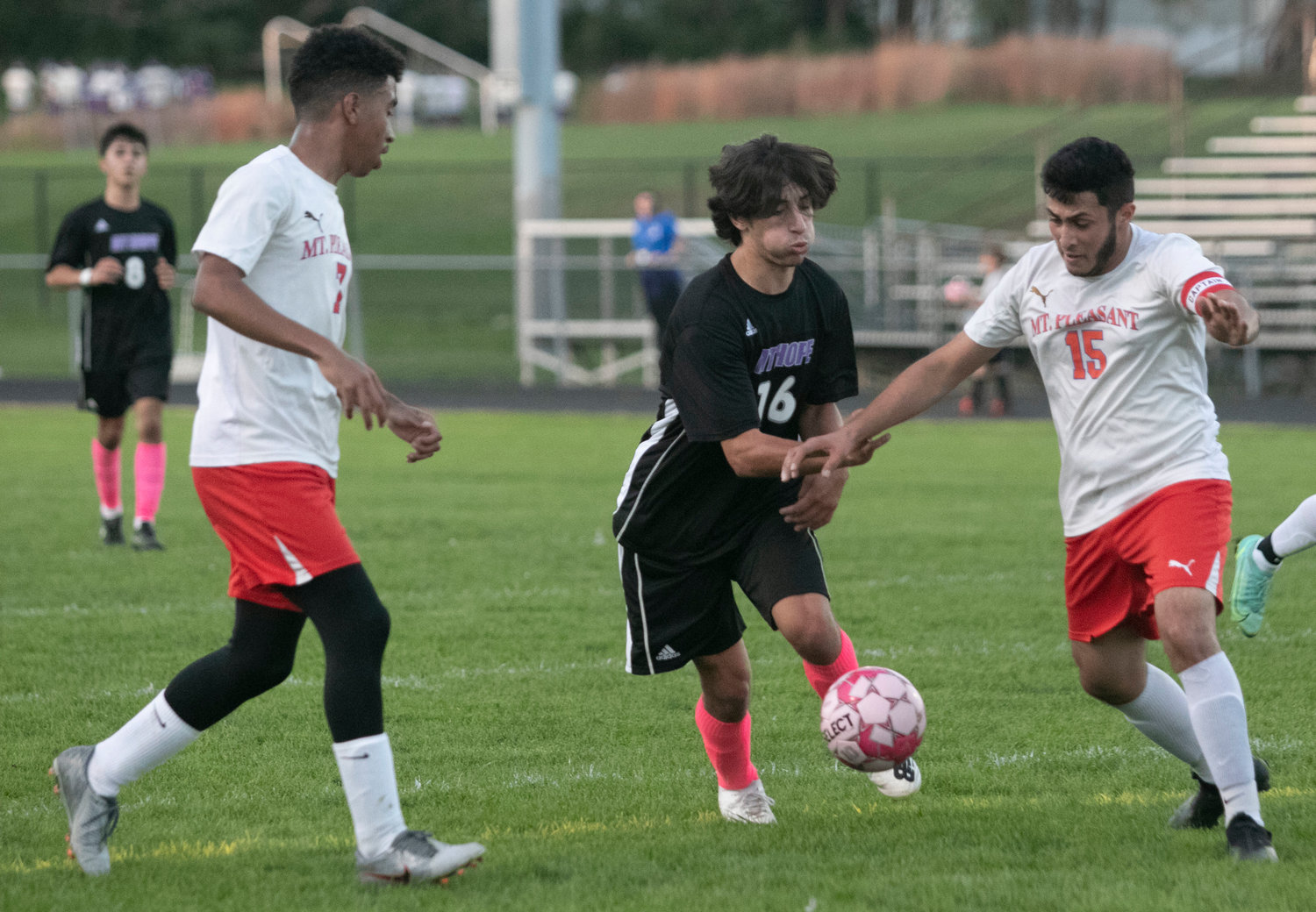 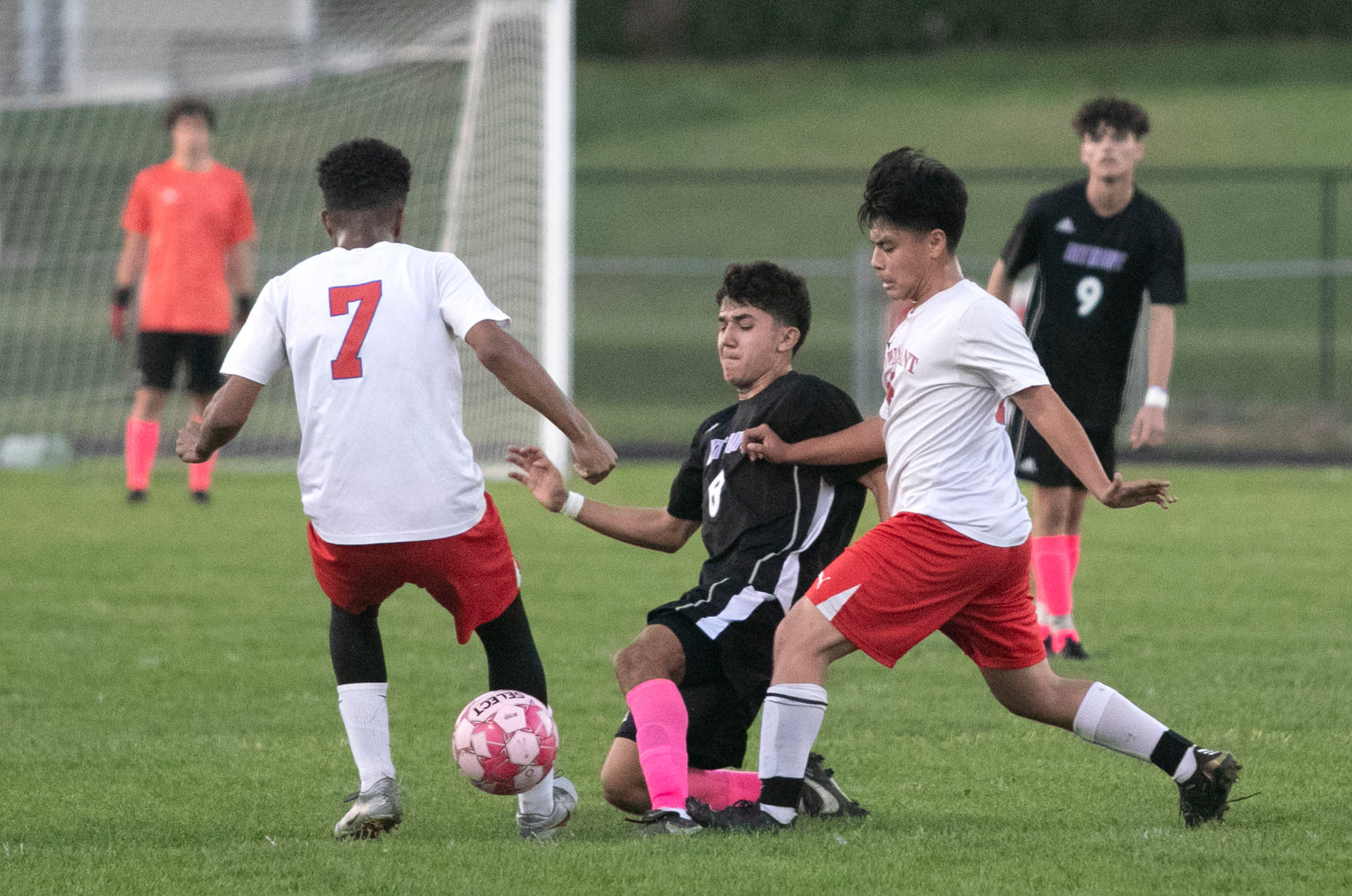 Noah Furtado looking to score, is upended by Mt. Pleasant goalkeeper Joel Guevara as he dove to make a save.
Photos by Richard W. Dionne, Jr. 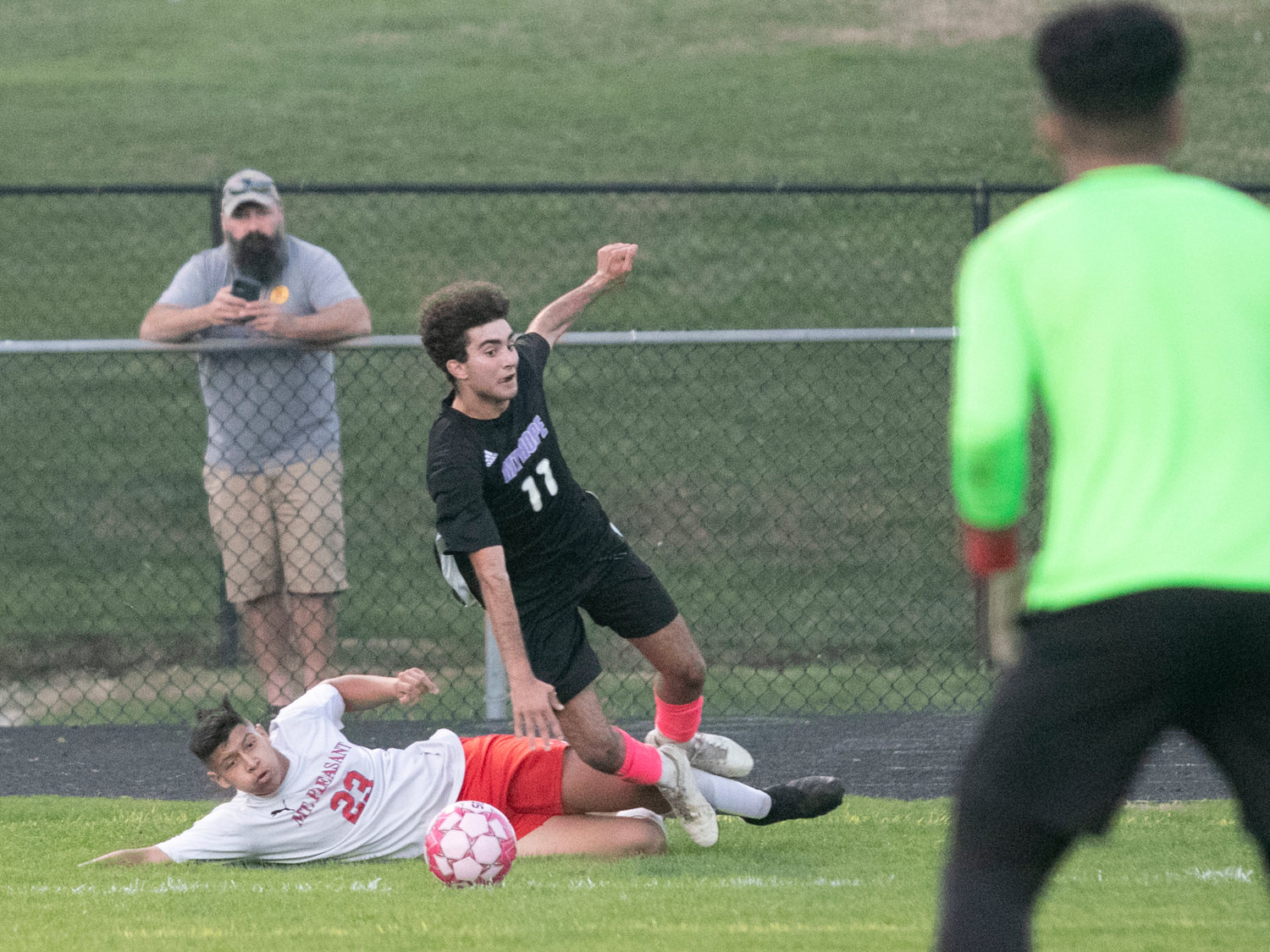 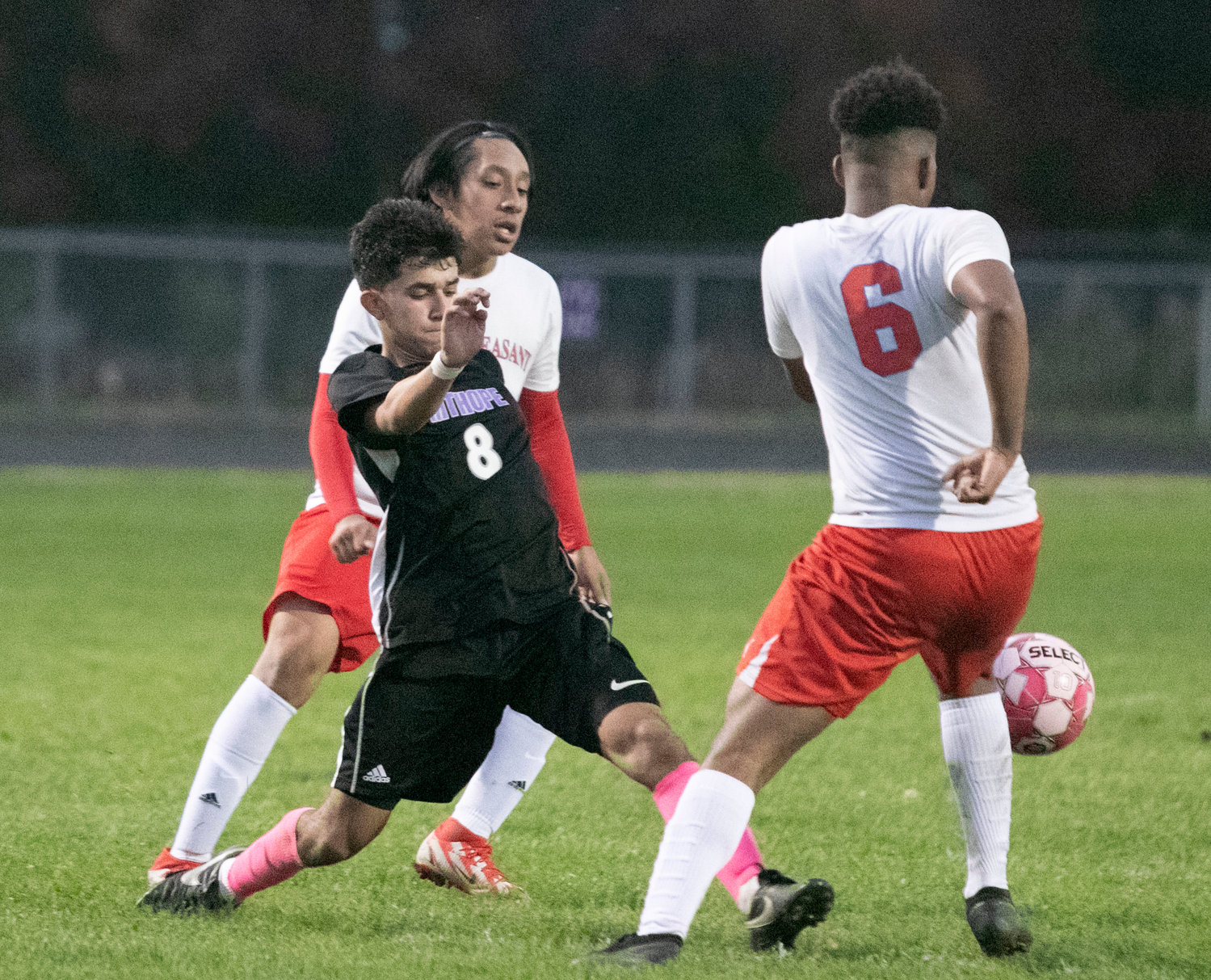 Chad Parente makes a pass through a pair of defenders.
Photos by Richard W. Dionne, Jr. Zach Avila makes a play on a goal kick. Avila a former goalkeeper, has played every position this season. “He’s a jack of all trades,” said Coach Couto. 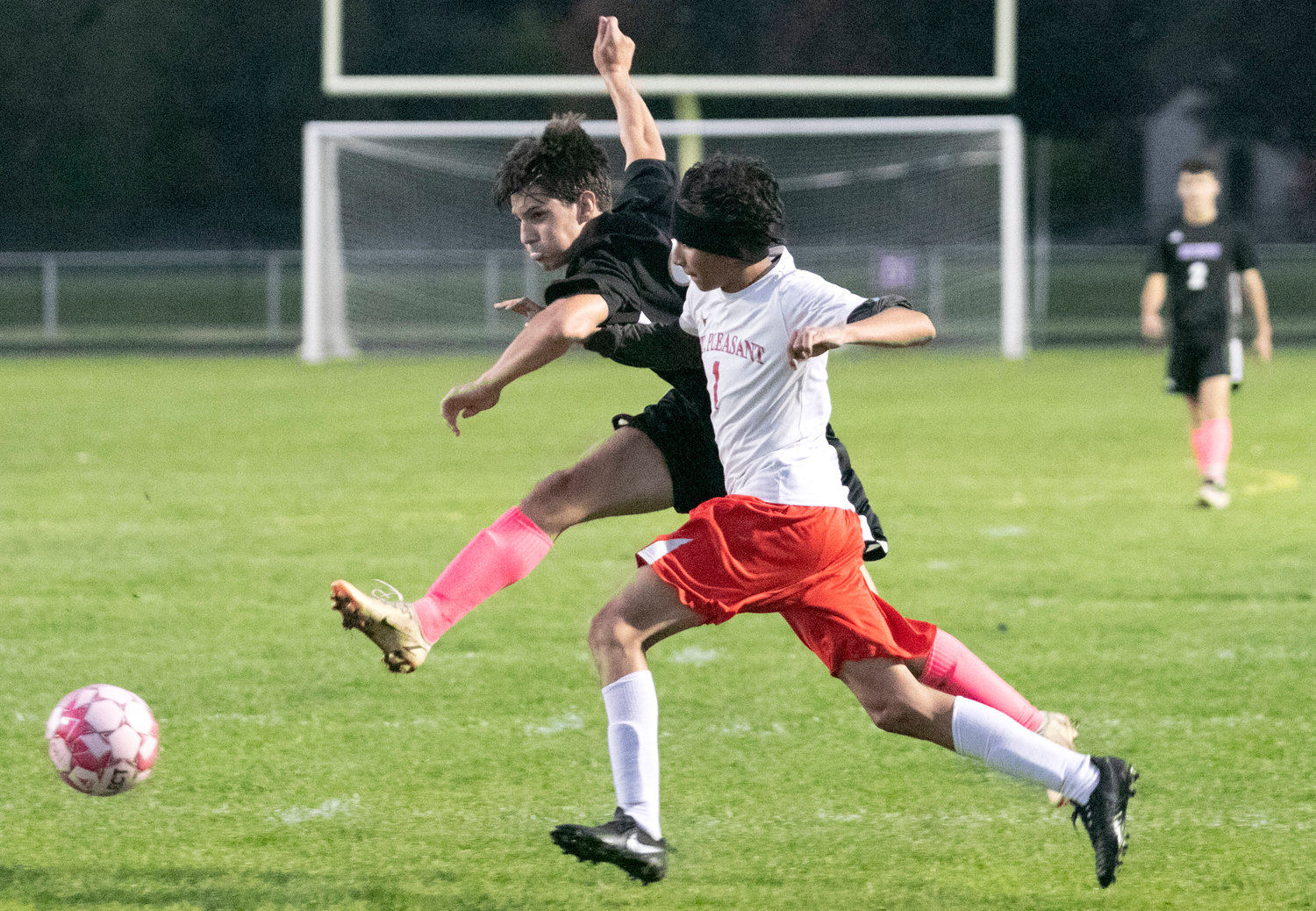 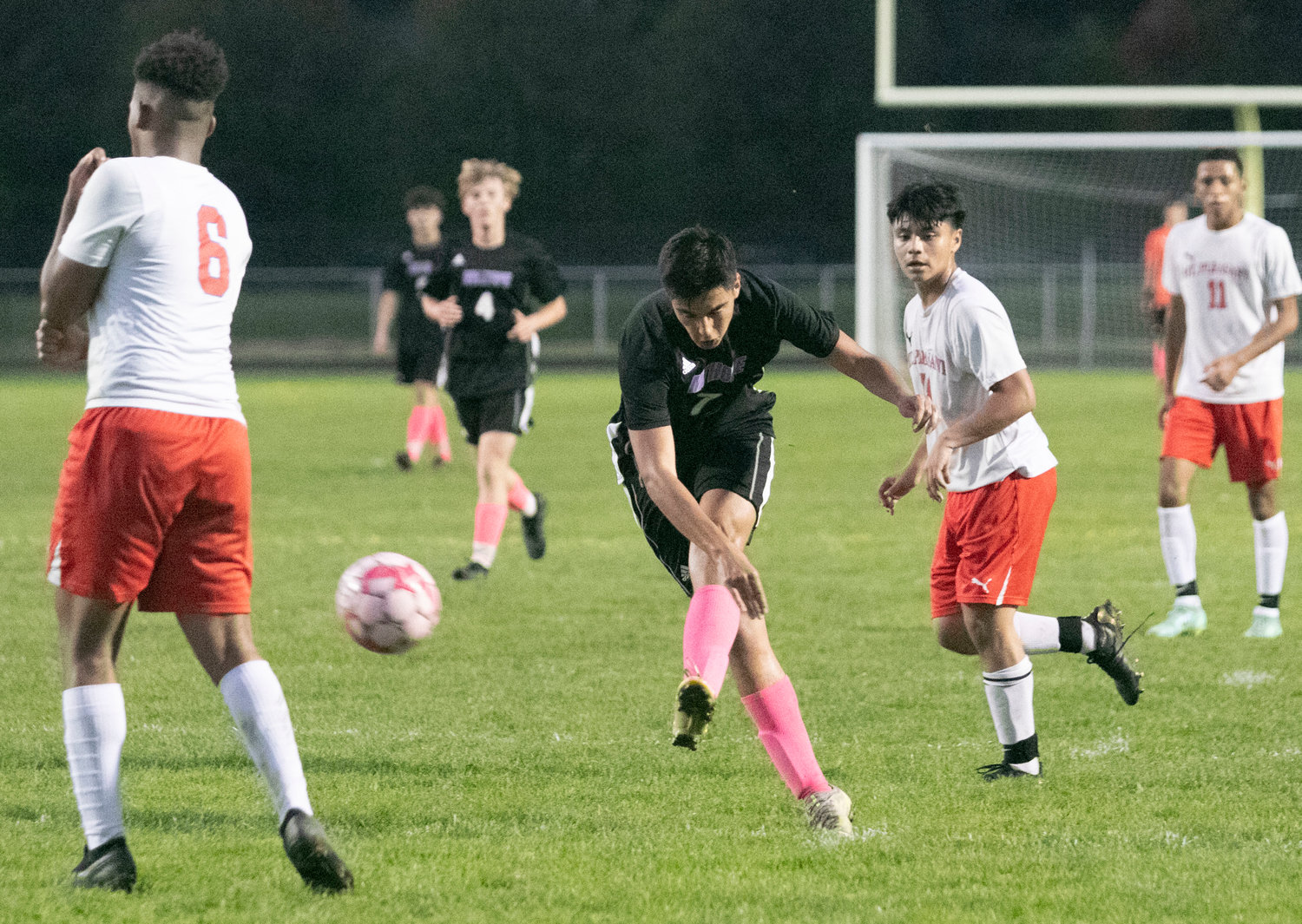 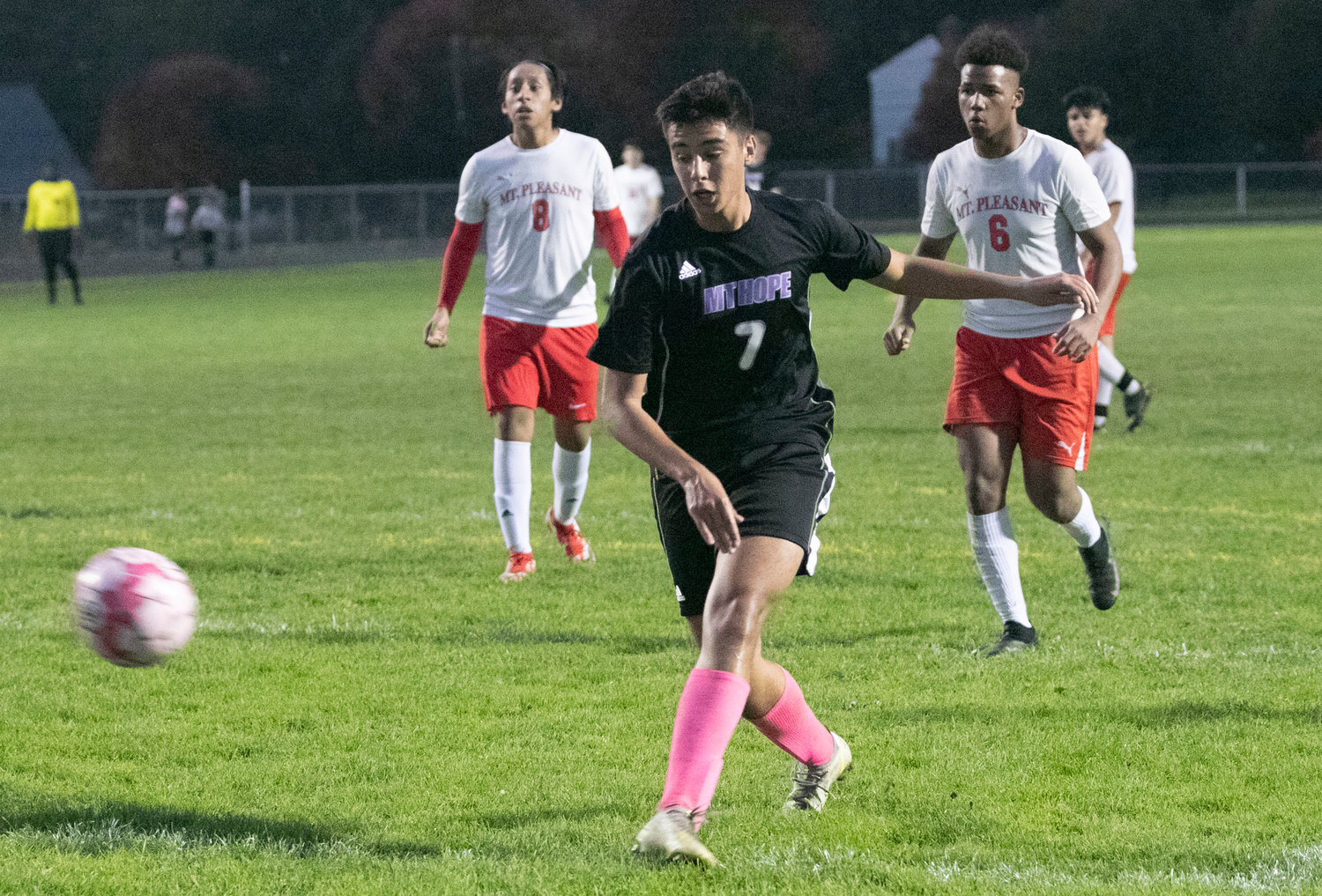 Jayden Terra places a kick past Mt. Pleasant goalkeeper Joel Guevara to put the Huskies up 2-0 in the first half.
Photos by Richard W. Dionne, Jr. The Mt. Hope soccer team notched two more victories last week, bringing their season record to 11-1-2, the best record in Division 2. The Huskies shut out Mt. Pleasant, 3-0, during a home game, then beat Mount. St. Charles, 3-1, during an away game two days later.  If the Huskies beat North Smithfield on Friday, they can clinch the one seed in the playoff bracket.

Furtado leaped over the scrum to head in a Terra corner kick for a 1-0 lead. Terra later burst through three defenders and blasted a shot from the left side of the box to put the Huskies up 2-0.

“Jaden’s goal was pretty special,” said Huskies head coach Alex Couto. “We emphasize hard work. Never give up. That goal showed everything that we ask of them. He had to fight through three defenders, and he refused to give up and he kicked a rocket into the net.”

In the second half, Canario scored by volleying a direct kick from Griffin Berotta into the goal to give the Huskies a 3-0 lead.

Coach Couto switched up the team’s formation from a defensive 4-5-1, to an attacking 3-4-3 earlier in the season, and it has paid dividends for the Huskies.

“We want our forwards flying all over the field and creating turnovers in the offensive zone,” said Coach Couto. “We want the team to be aggressive and close down on the ball.”

The switch has worked out great for Furtado, the team’s senior striker who leads the team with 11 goals this season.

“Noah is difficult to defend,” said Coach Couto. “He’s a fighter and a ball hawk. Noah is one of those guys who is constantly attacking the ball no matter where it is.”

The Huskies’ talent at midfield, defense and goalkeeper allowed Coach Couto to make the switch. Seniors Terra, Chad Parente, Kaden Silva and Nick Andreozzi are good enough to play with just four instead of five, said Coach Couto  Defenders Parker Camelo, Griffin Berardo, Jack McNally (when healthy) and goalkeeper Matt Terceiro have been team strengths that Coach Couto felt he could lean upon to make the offense stronger. Terceiro has been brilliant between the posts and has recorded eight shutouts this season.

“Matt’s one of the best in the state,” said Coach Couto. “We have been scoring a ton of goals, but we haven’t allowed any goals either. It’s been panning out on both sides.”

Coach Couto believes the applied pressure lessens an opponent’s time to push the ball upfield. “We are forcing them to just kick it, and it’s coming down in our favor. We have allowed the least amount of goals in Division I, II and III,” said Coach Couto. “It’s something that we’ve been working on over the years. If we don’t allow goals we can’t lose.

The Huskies are hoping to get senior midfielder Nick Andreozzi back in time for playoffs. The midfielder injured his ankle during the West Warwick game.

Senior Zach Avila has been the team’s unsung hero this season, according to Coach Couto. A former goalkeeper, Avila has played every position this season. “He’s a jack of all trades,” said Coach Couto. “He can literally play anywhere. Zach has stepped up and did everything that we asked of him.”