The Mt. Hope girls basketball team edged Woonsocket, 39-34 in a Division III home semifinals game on Wednesday night. The Huskies will play either North Smithfield, or Mt. Pleasant, for the … 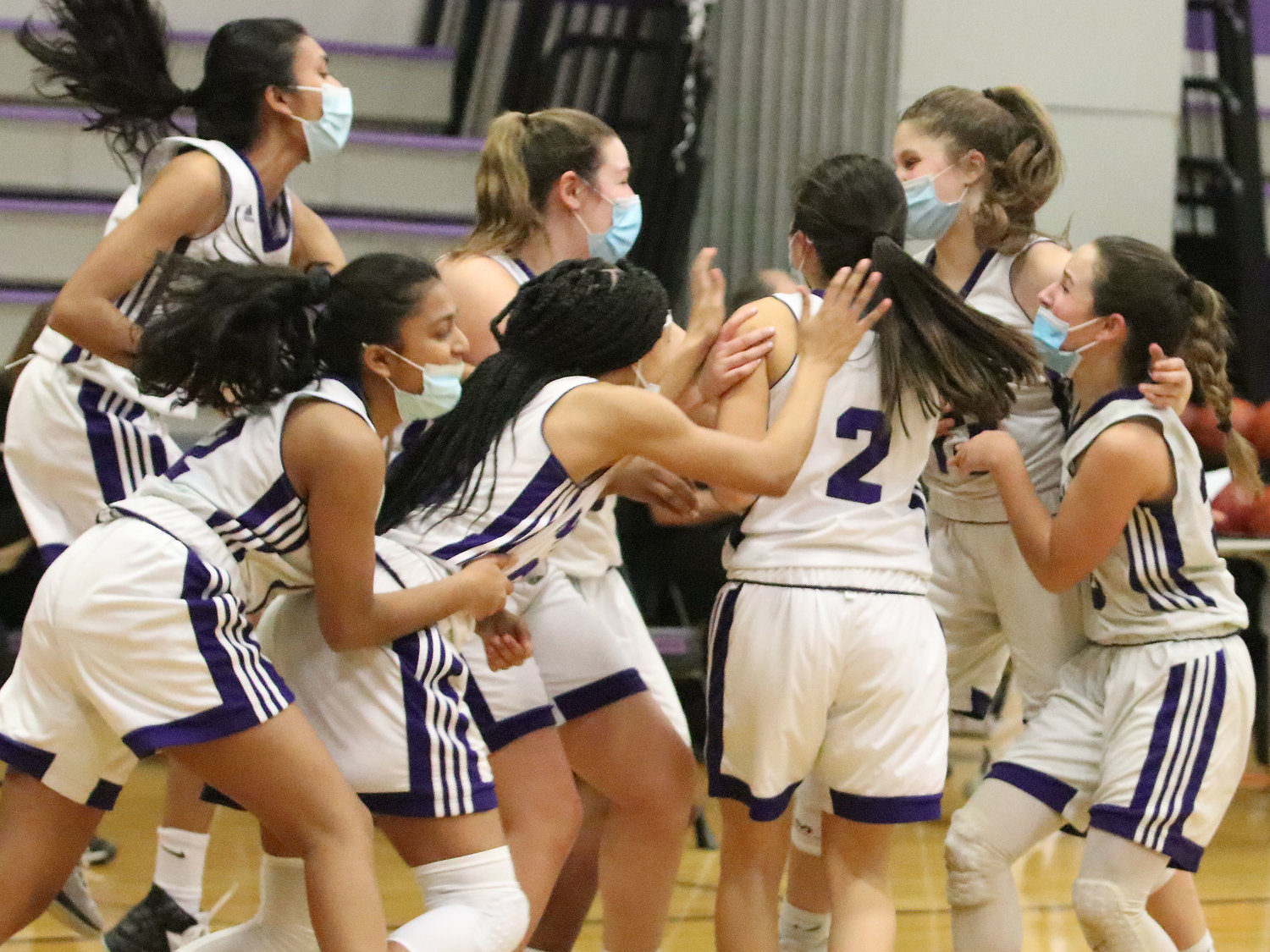 The Mt. Hope girls basketball team celebrates after defeating Woonsocket, 39-34 in the D-III semifinals on Wednesday night. The team will play in the championship game on Saturday. 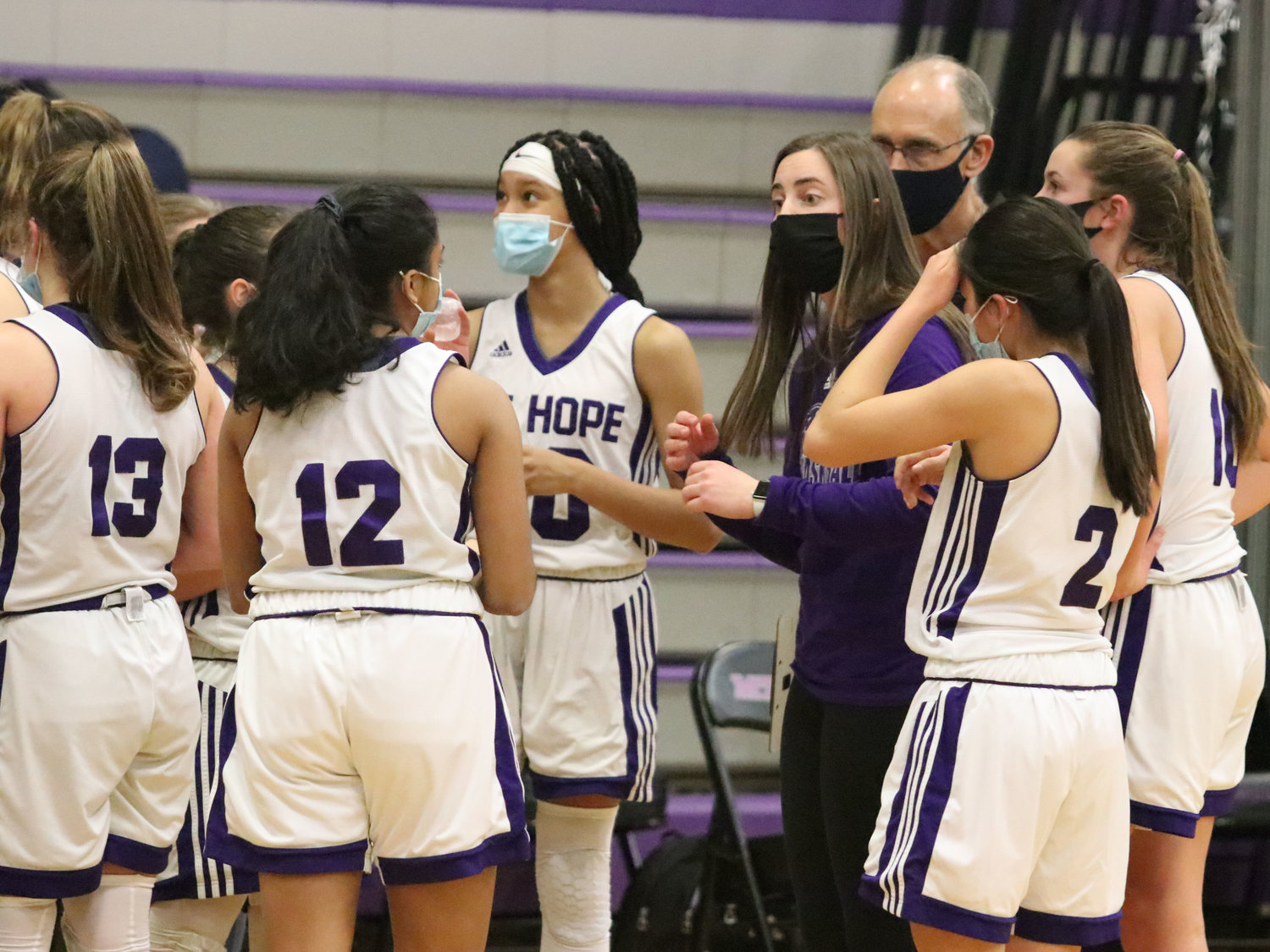 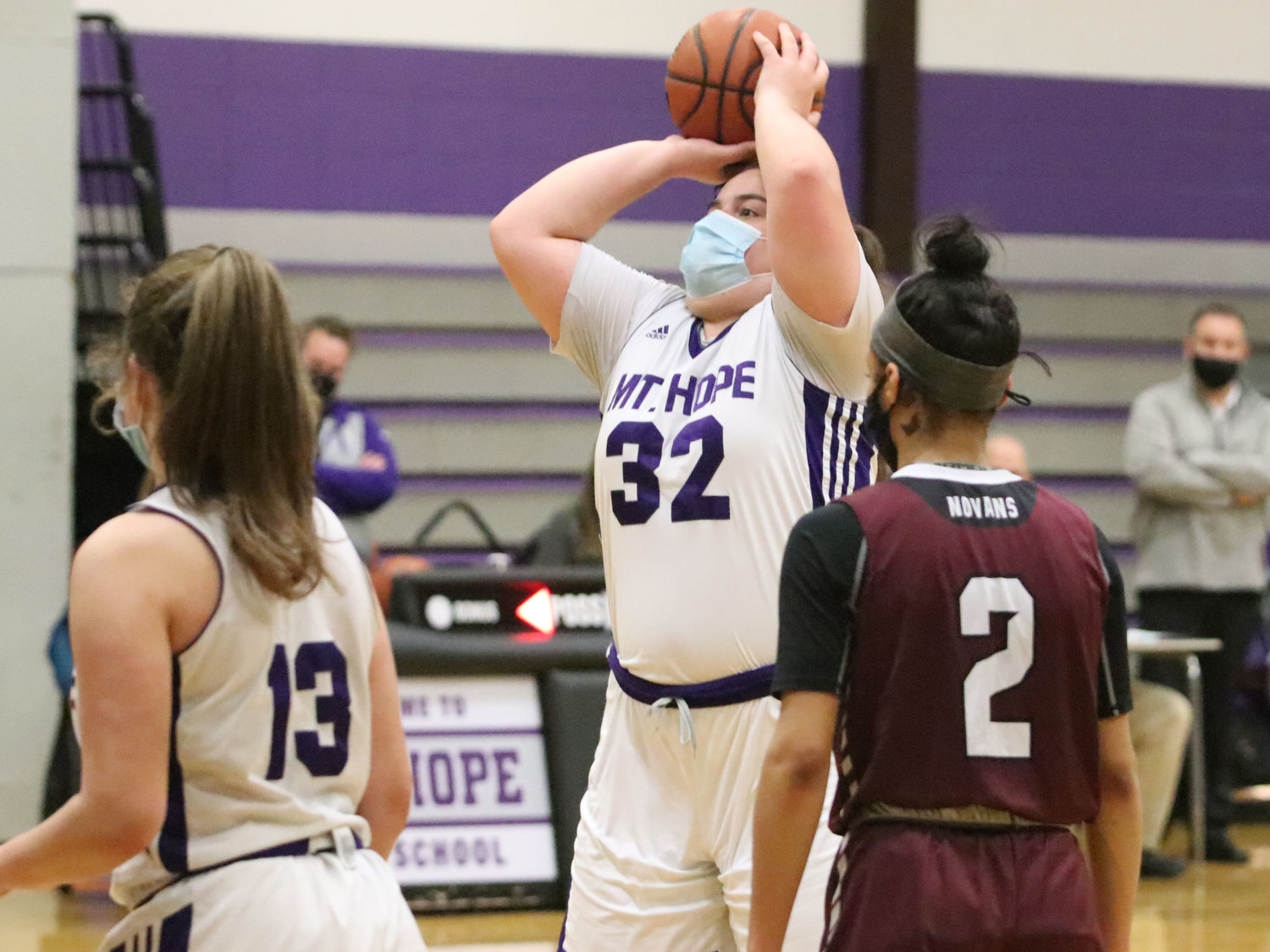 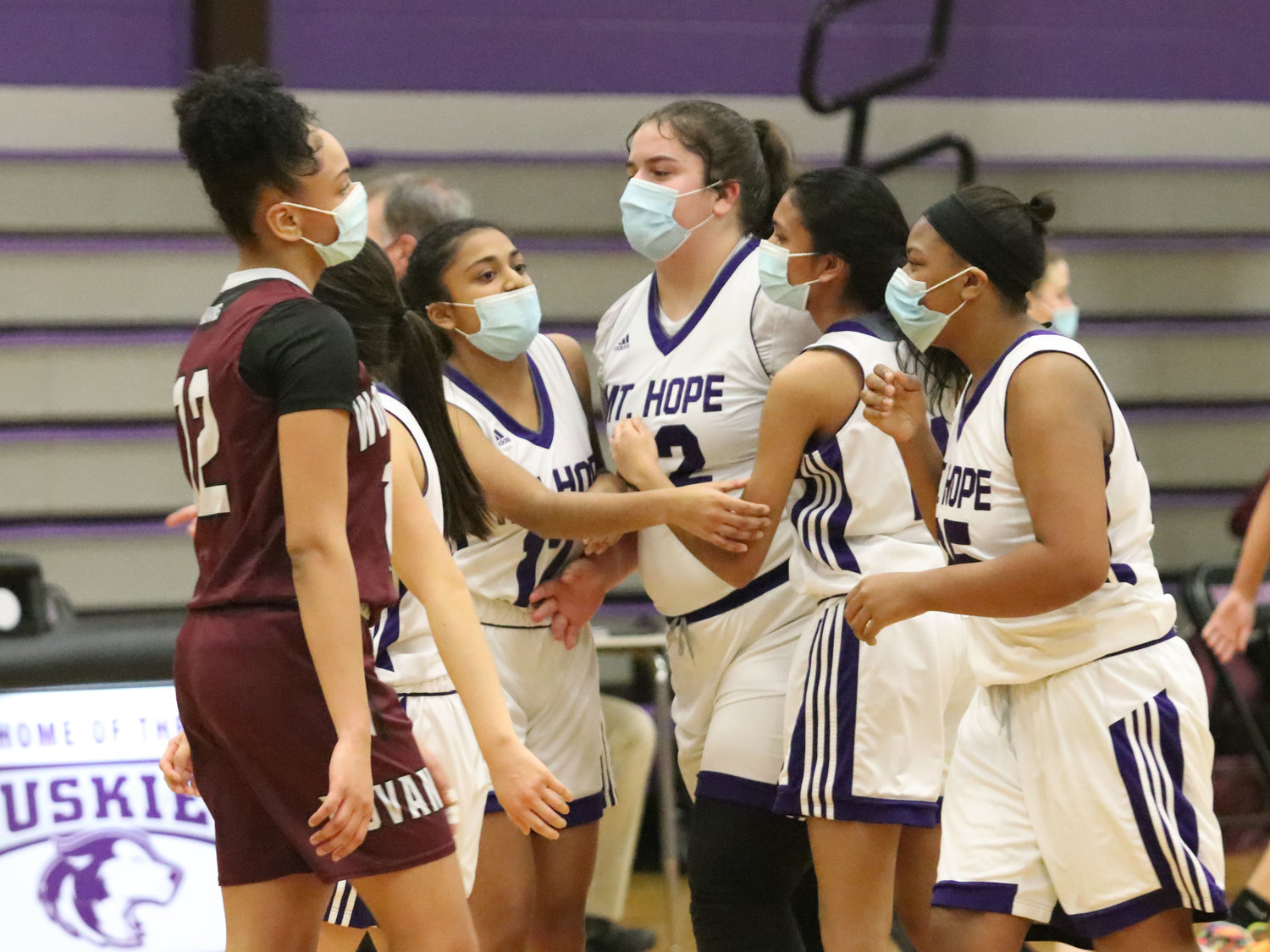 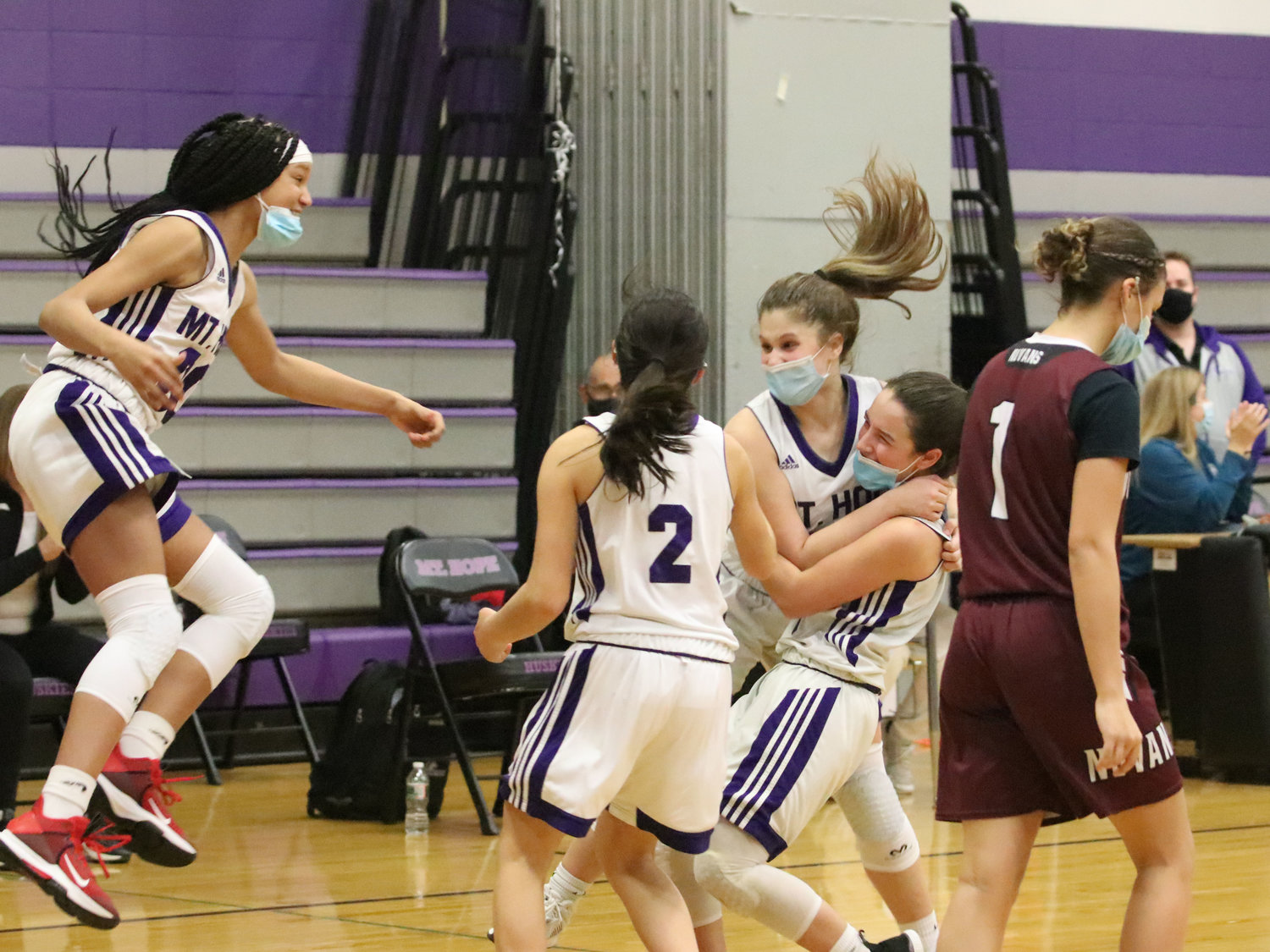 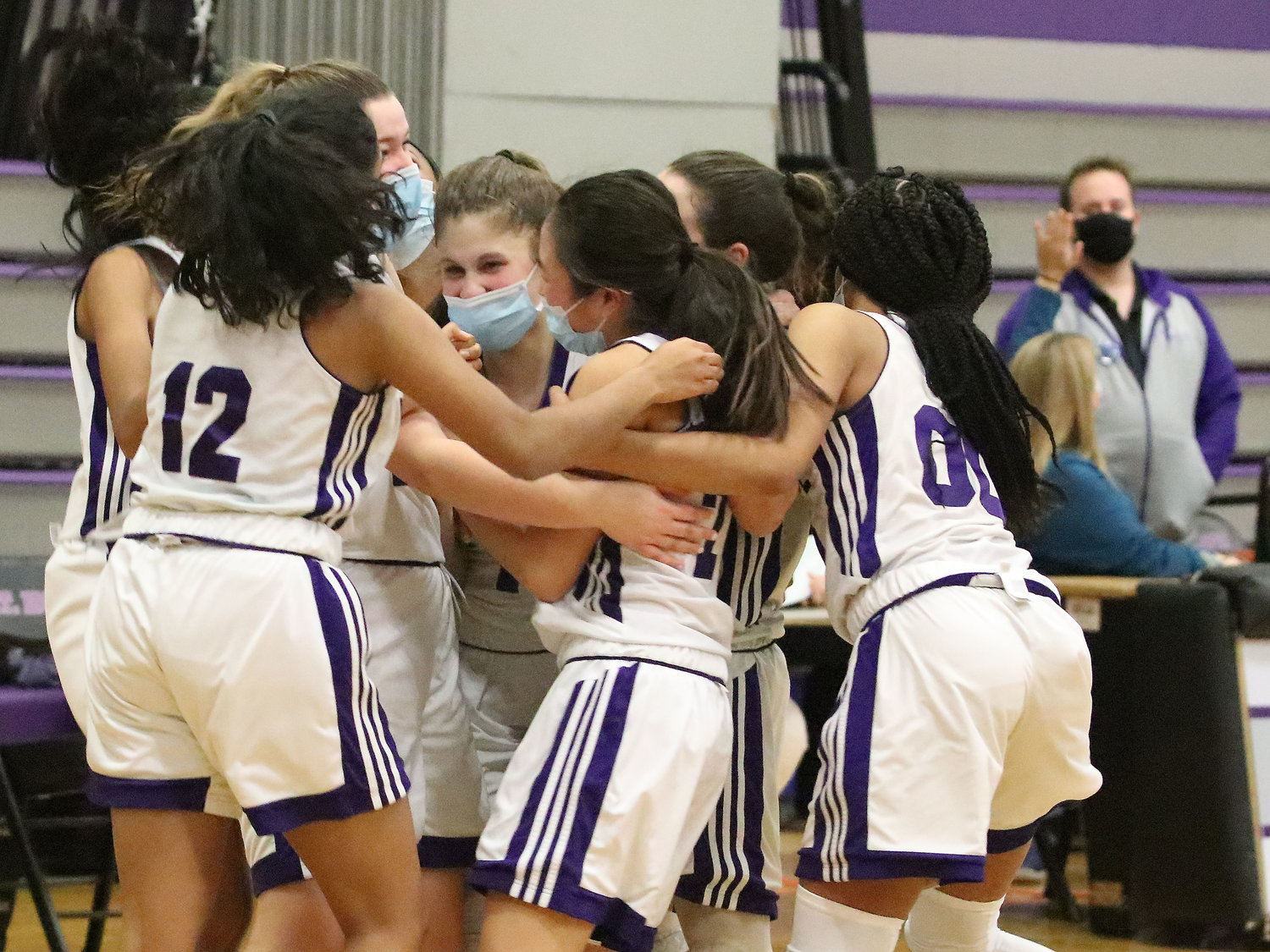 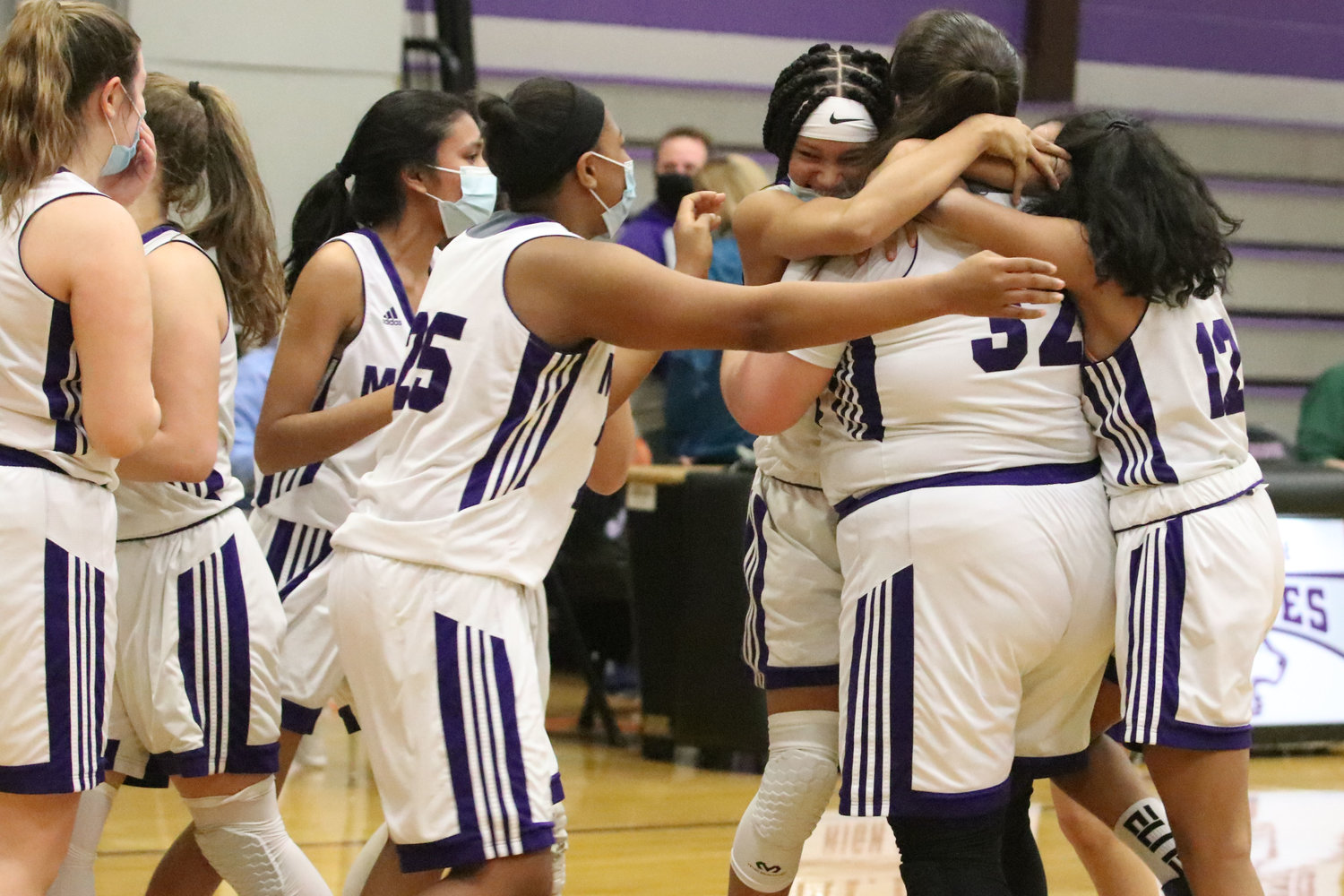 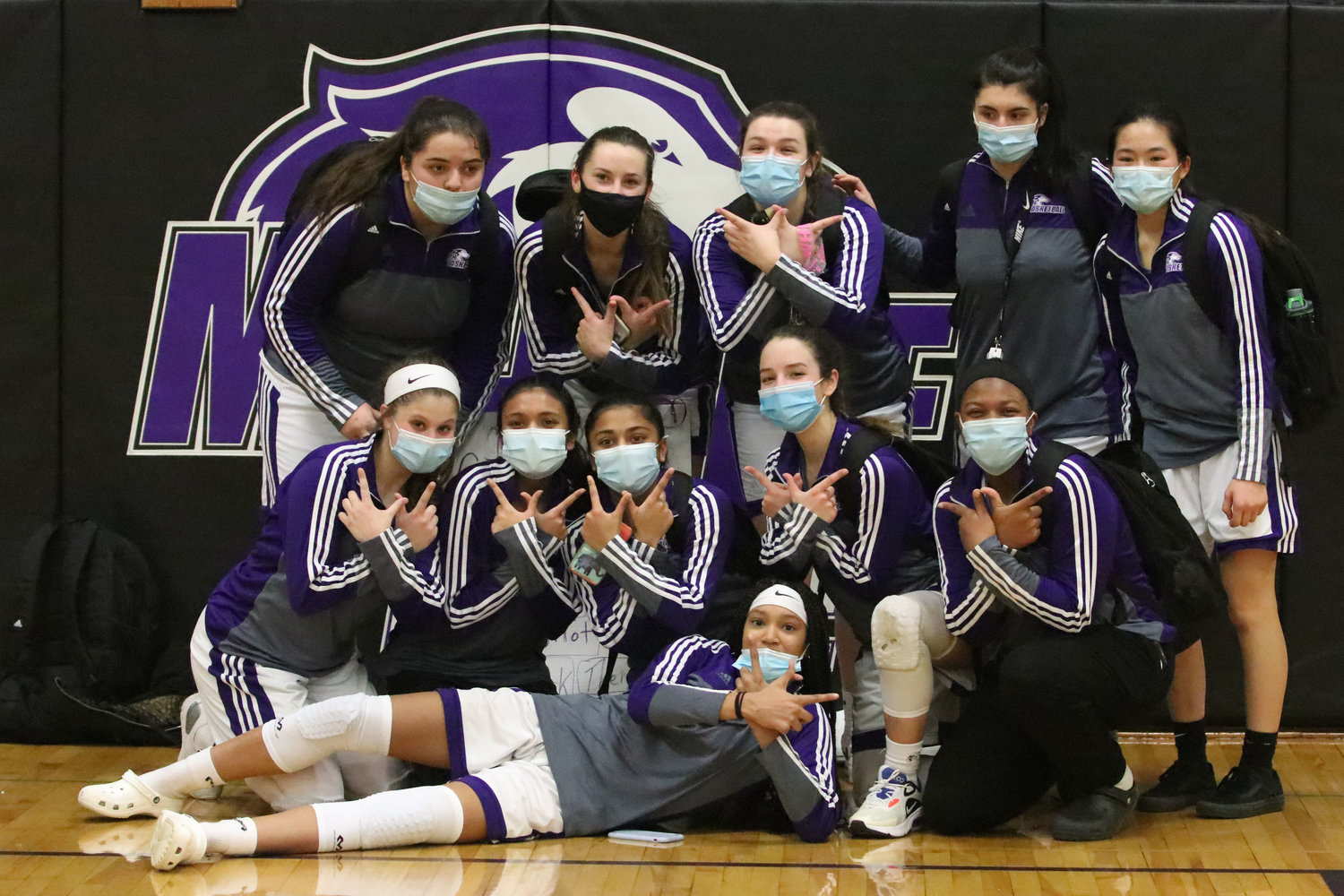 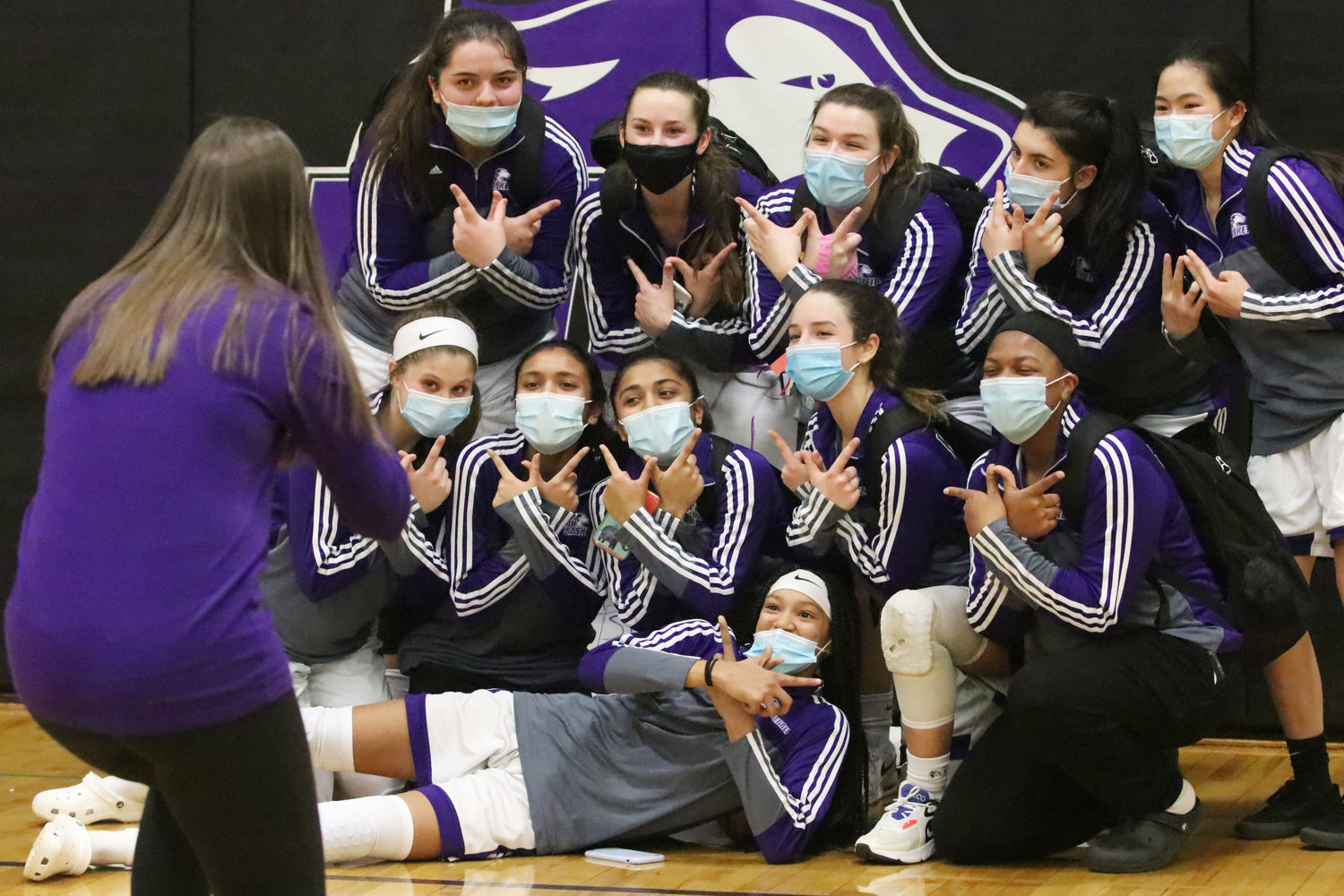 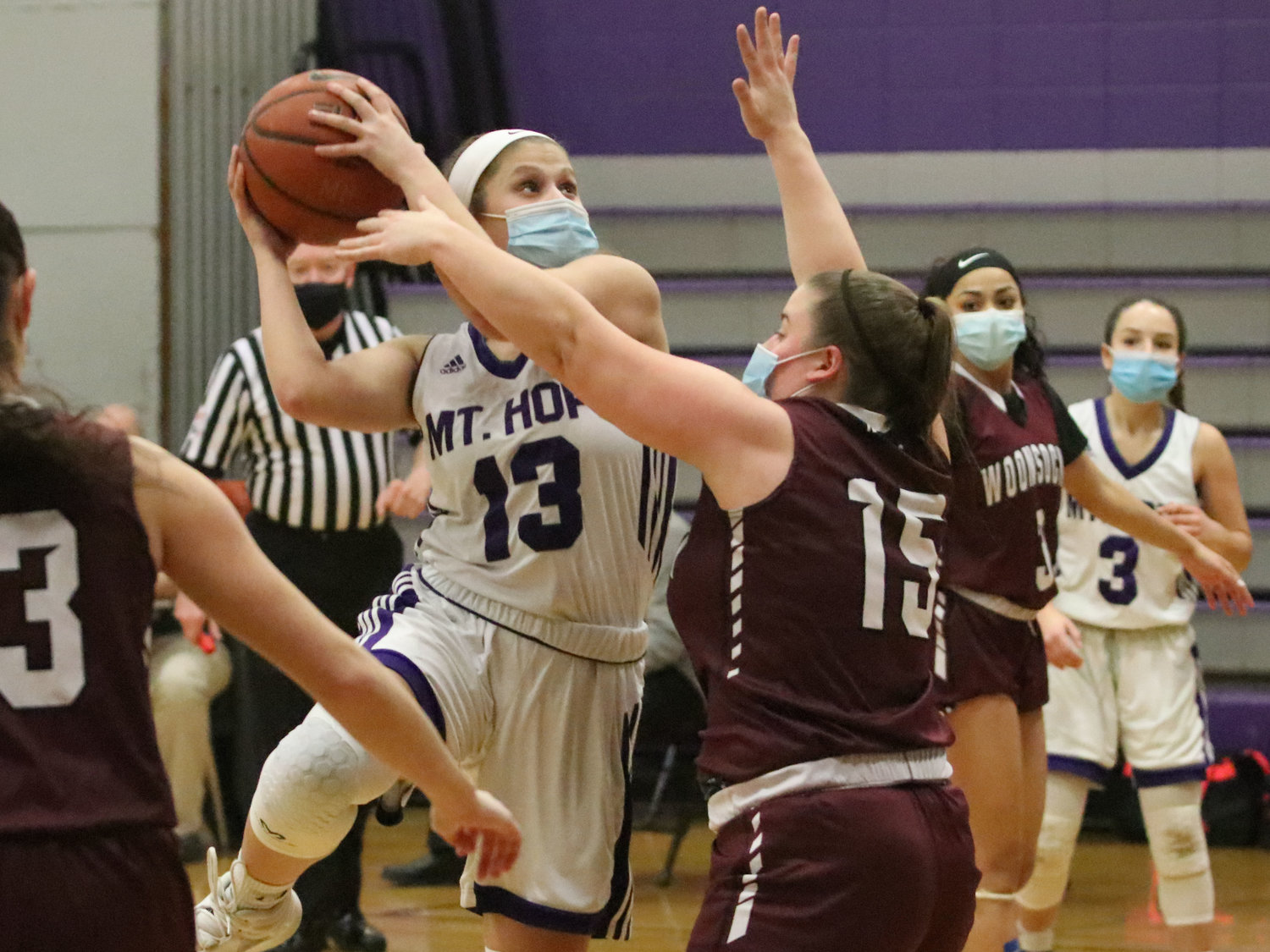 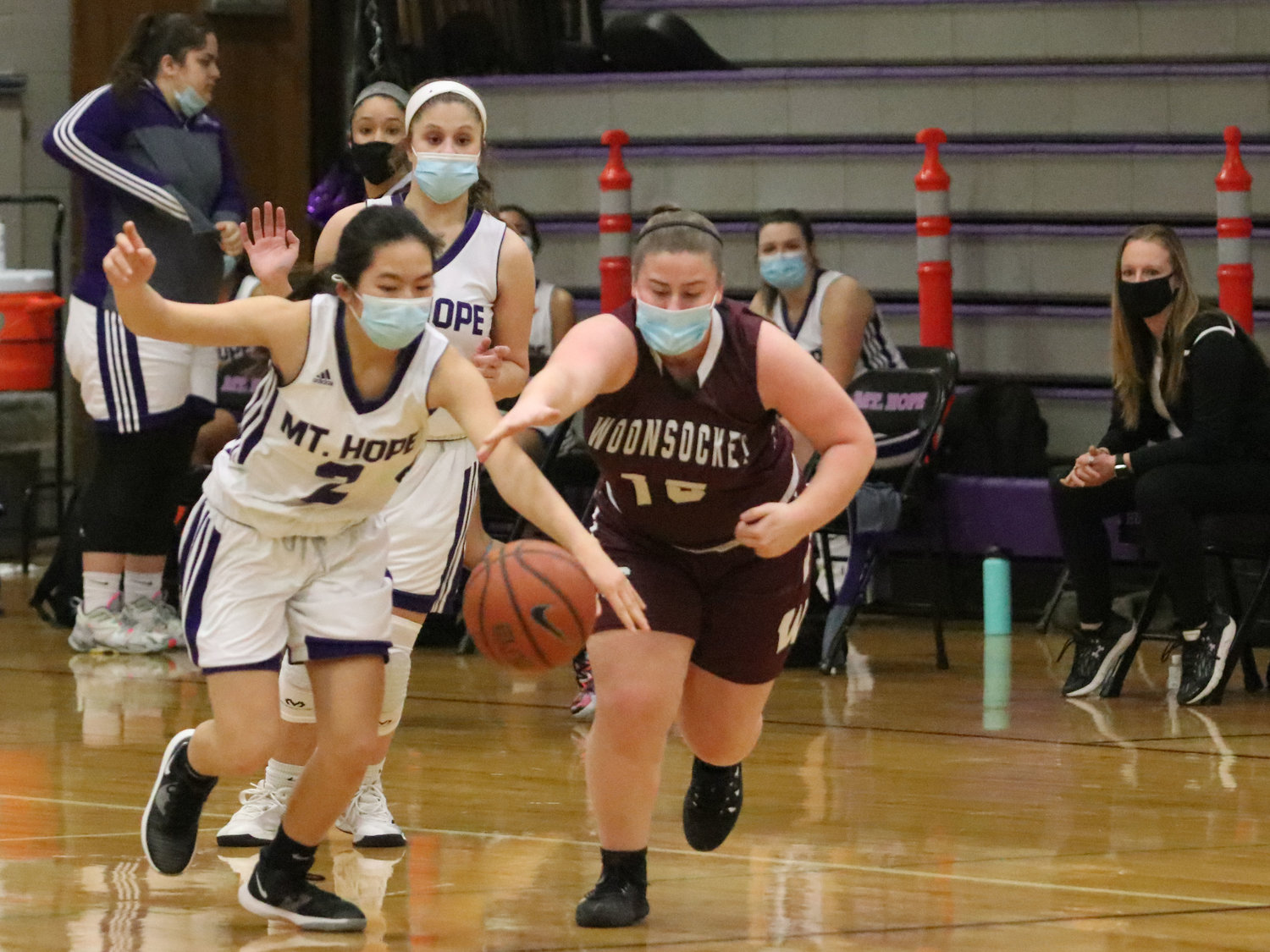 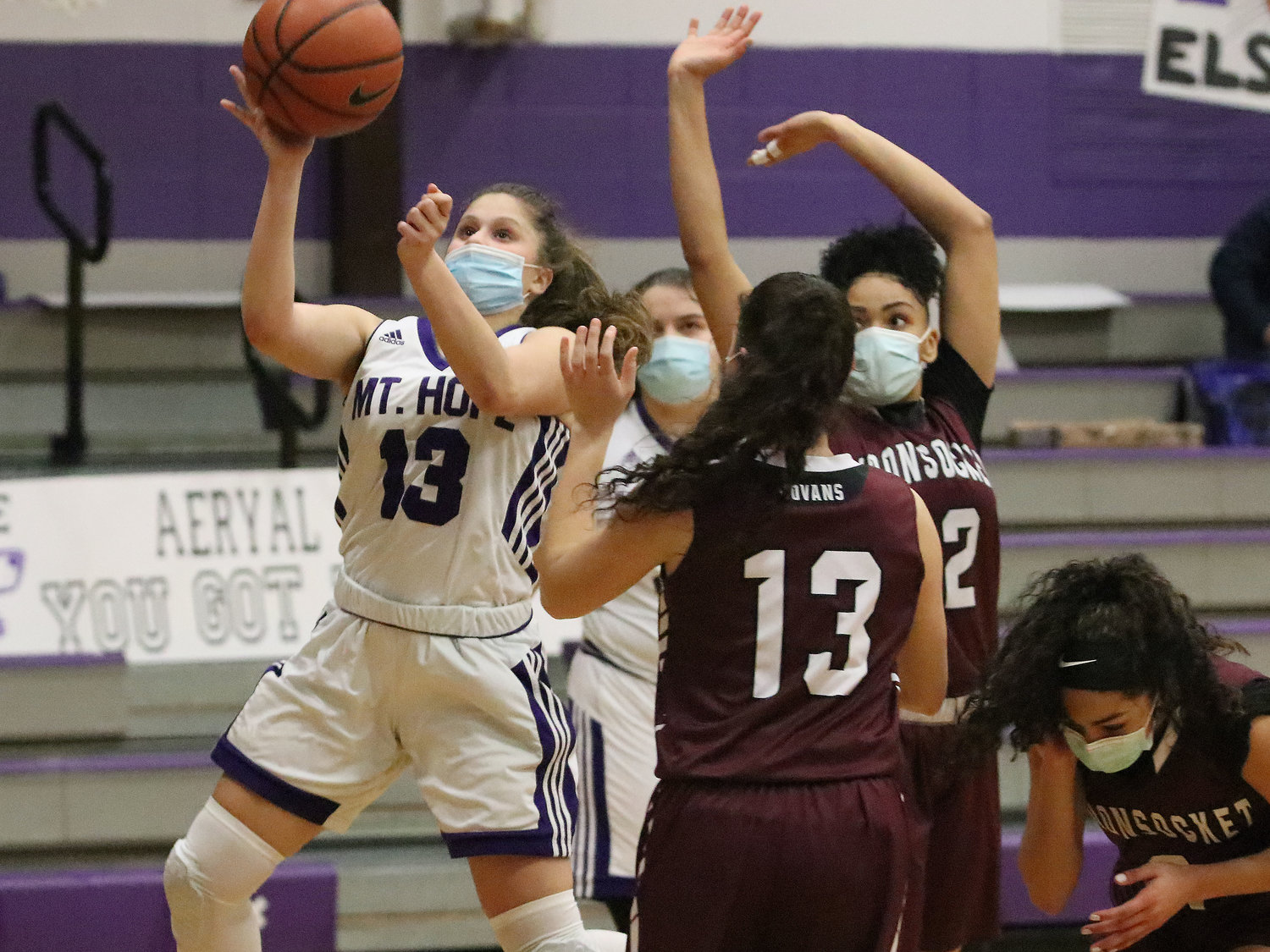 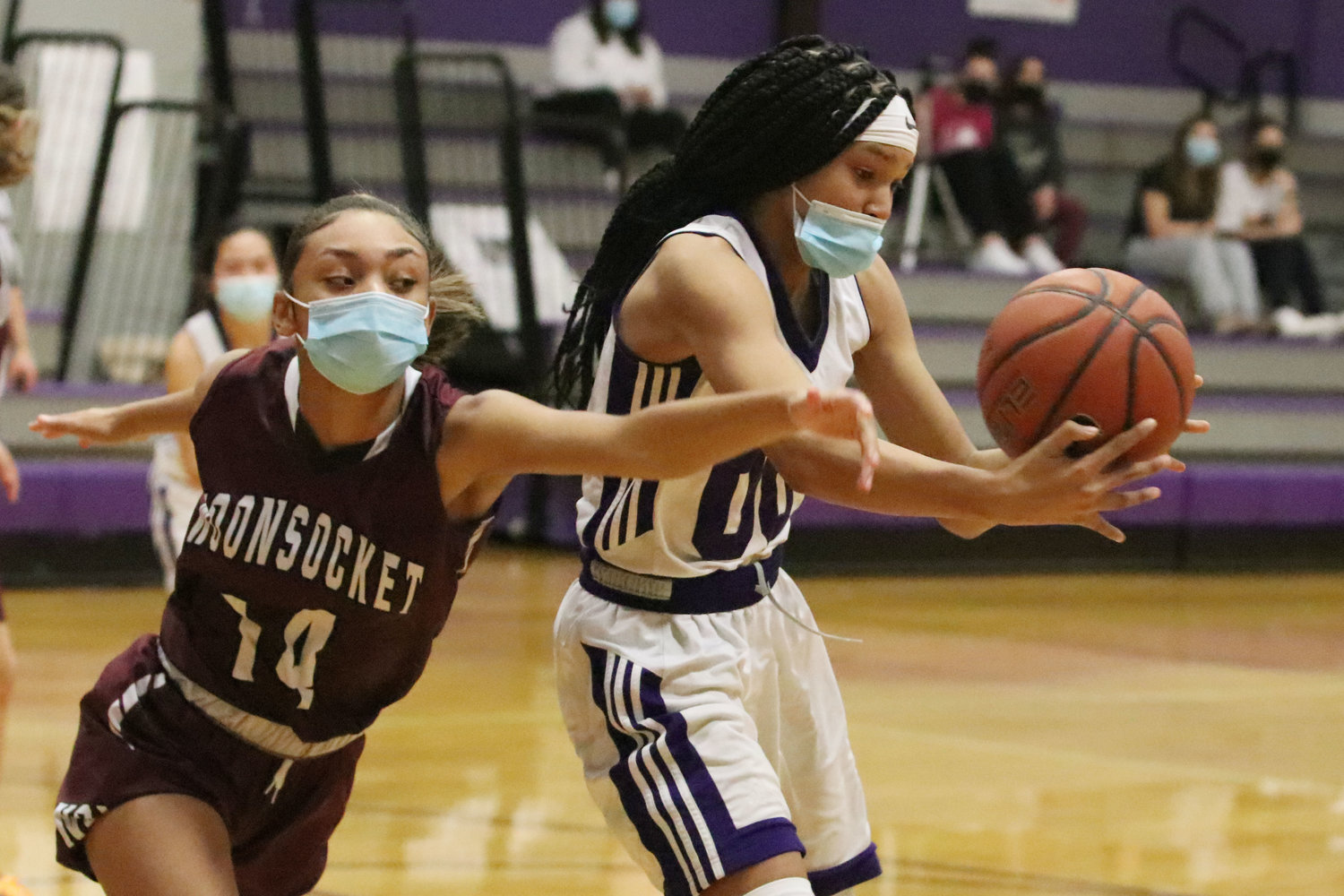 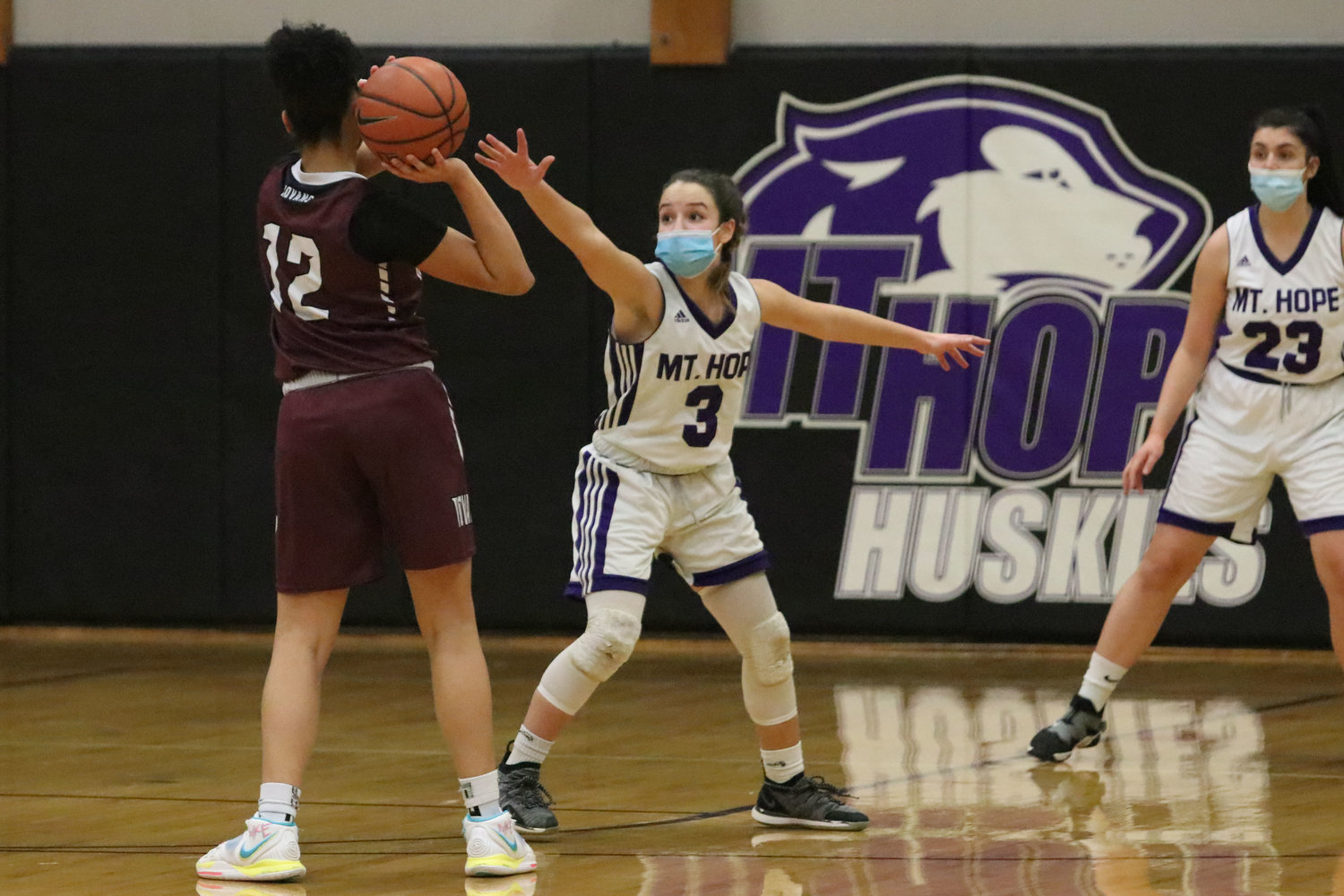 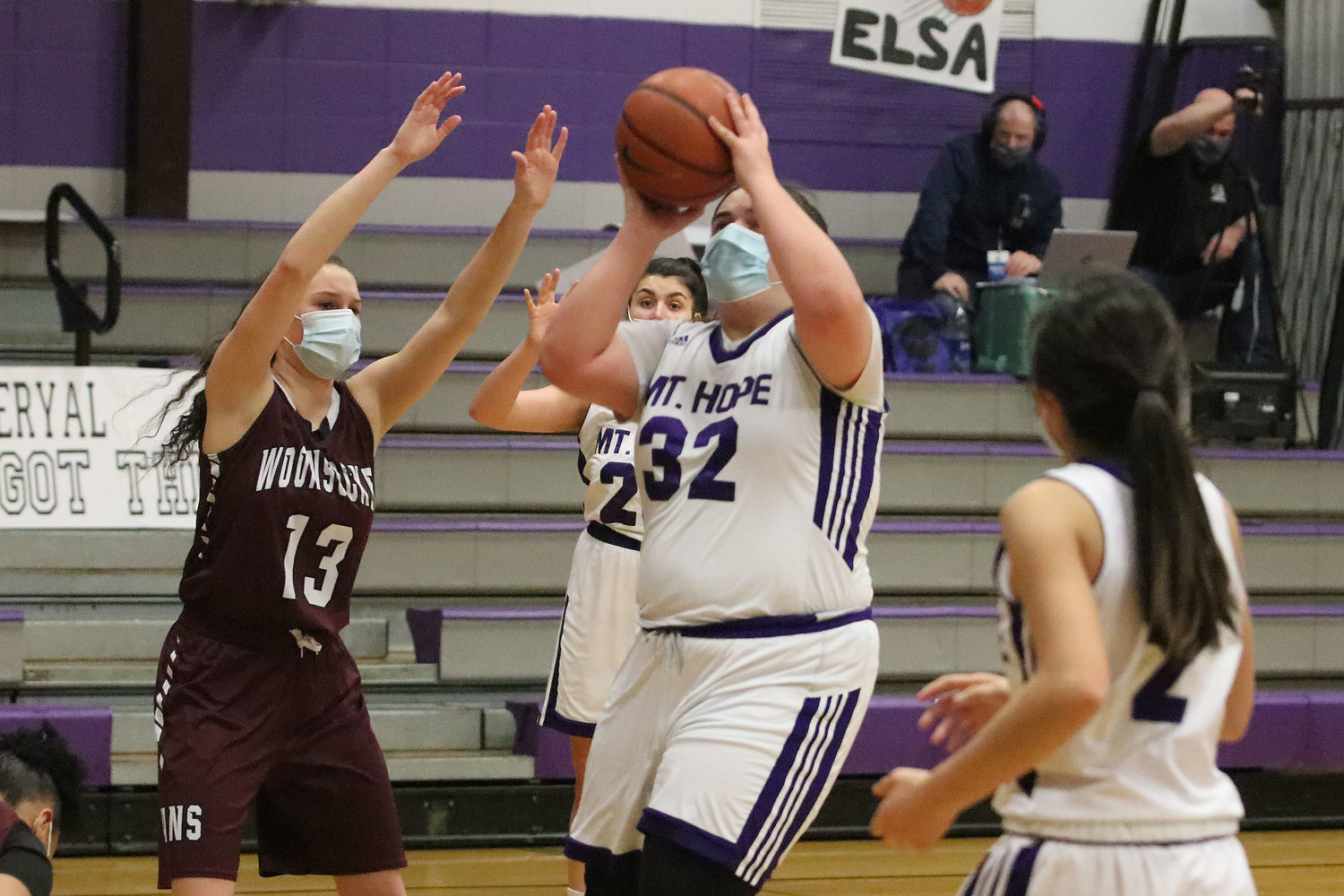 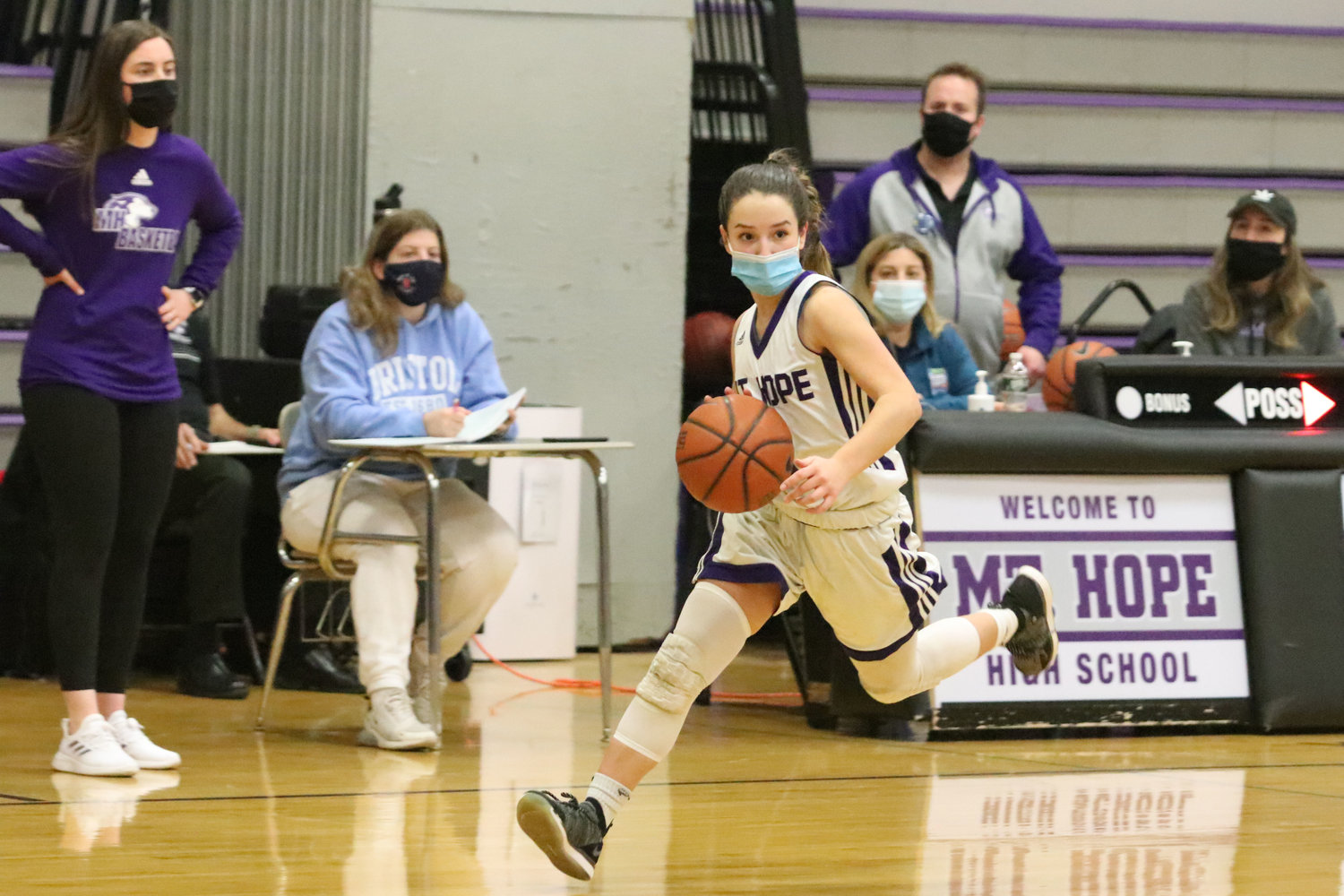 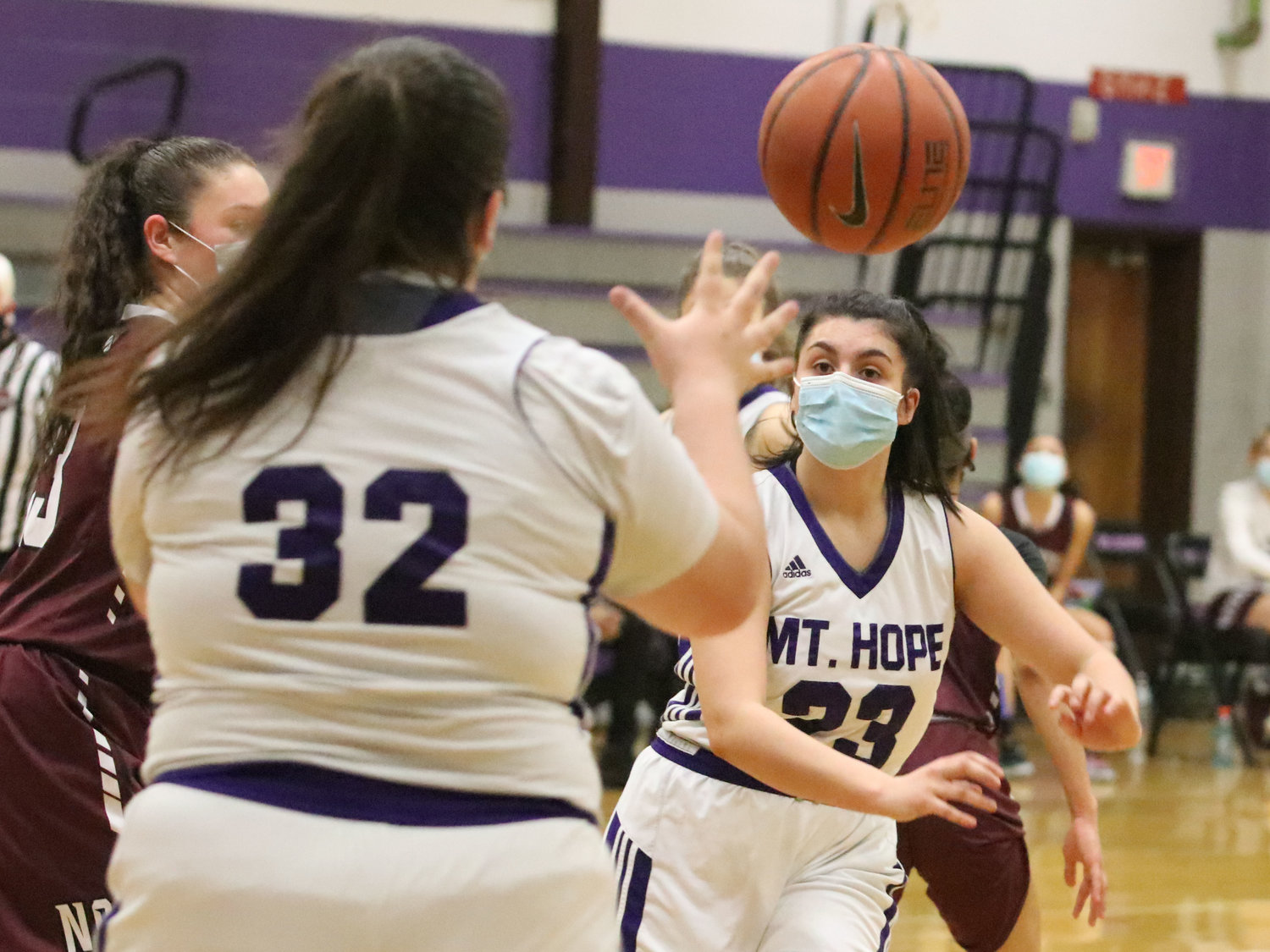 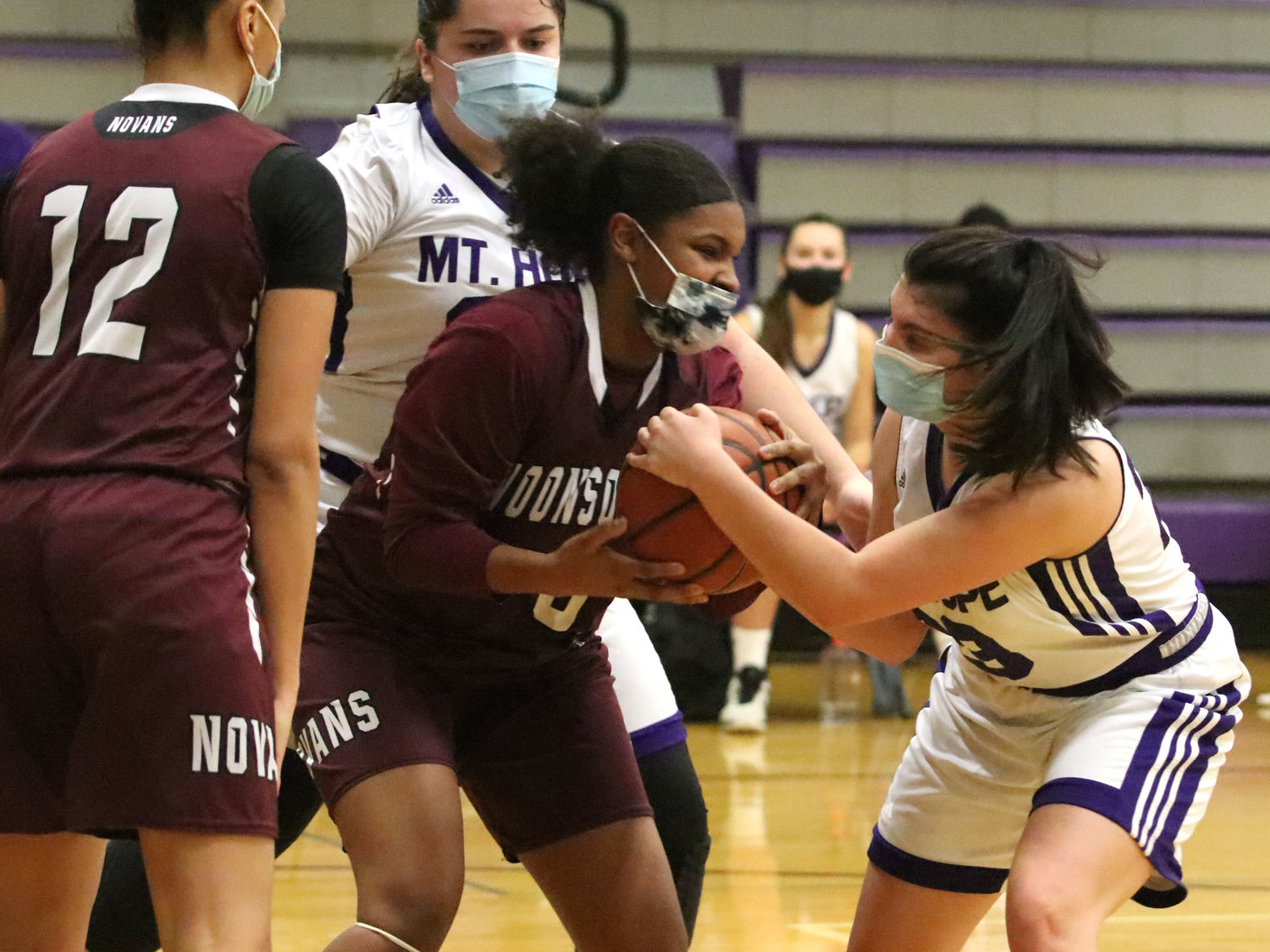 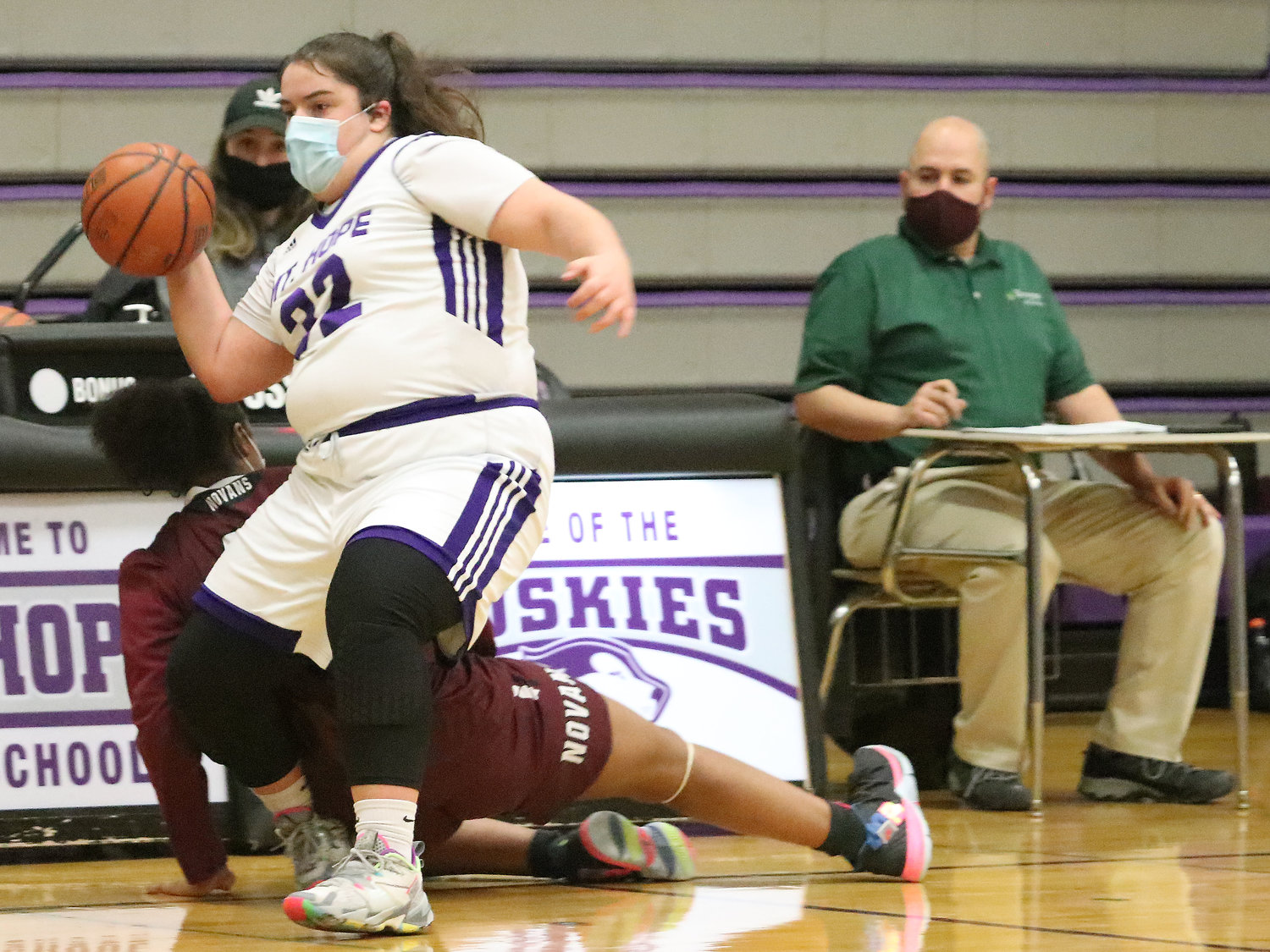 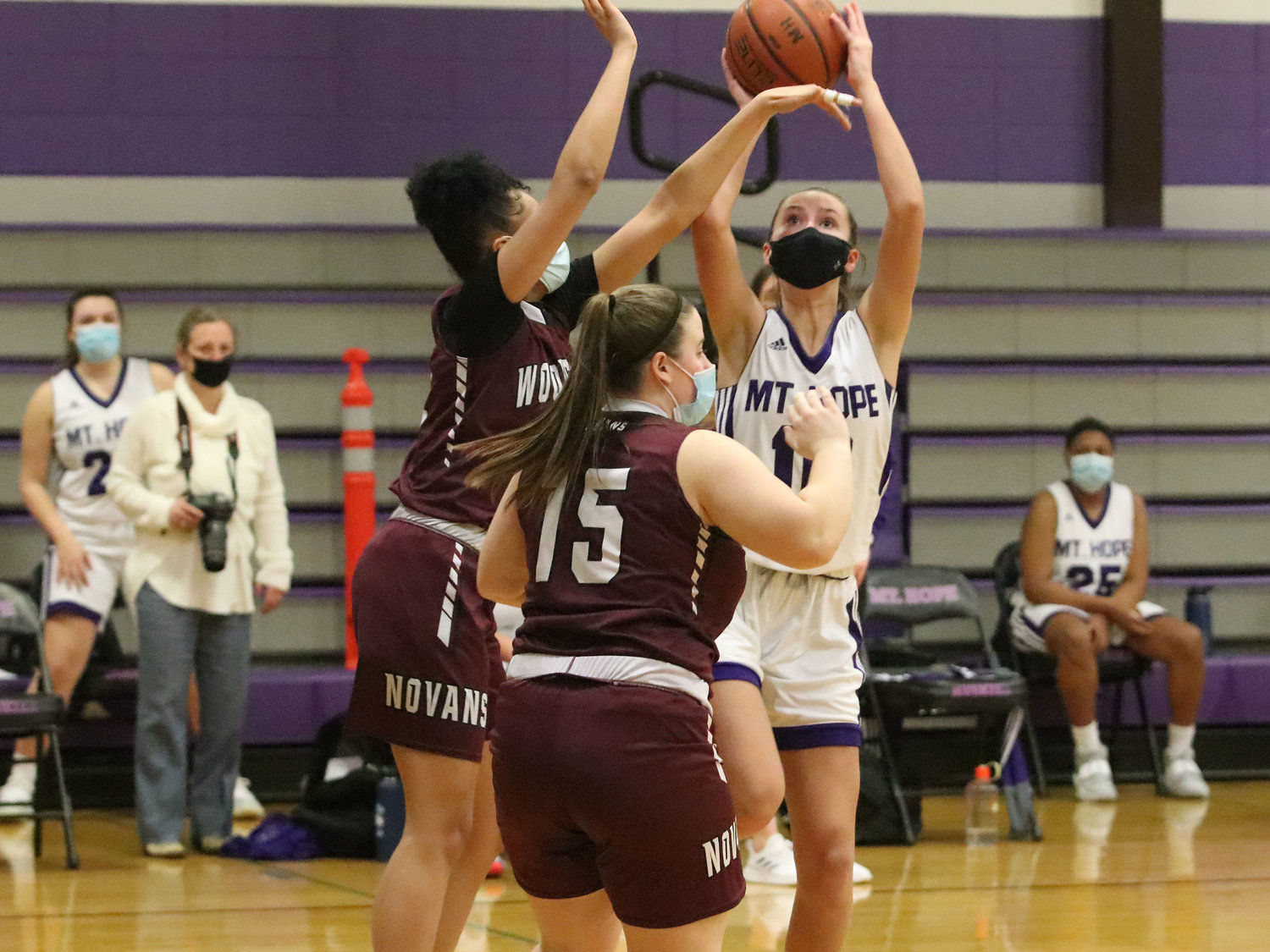 The Mt. Hope girls basketball team edged Woonsocket, 39-34 in a Division III home semifinals game on Wednesday night. The Huskies will play either North Smithfield, or Mt. Pleasant, for the championship at Rhode Island College on Saturday at noon.

Sophomore forward Lauren Pais iced the game for the Huskies, sinking a pair of free throws with 14 seconds left to play, to give Mt. Hope a 38-34 lead. Sophomore point guard Abby Razzino led the team with 11 points. She added a free throw with 2 seconds left to make it 39-34. Time ran out and the bench erupted onto the court in celebration. Pais scored 6 of her 10 points, in the fourth quarter when the Huskies needed it most.

“Lauren was clutch tonight,” said coach Caitlin Booth. “She did a great job of getting open and making her shot.”

“Lauren pulled it through for us,” added coach Katie Kline. “She really shined today.”

Senior guard Isabel Savinon scored 8 first half points as the Huskies sprinted out to a 26-18 halftime lead. The senior netted a three to put Mt. Hope on the score board with 6:23 left in the first quarter for a 3-0 lead.

“Izzy’s tireless,” said Coach Booth. “This is her senior year. She wasn’t going to leave anything on this court.”

Mt. Hope looked to be cruising. Freshman guard Elsa White netted a pair of layups, stealing the ball twice while playing up top in the Huskies full-court press. Razzino scored 5 in the first half, with a three from the top of the arch. Pais scored 4 points, shooting two jumpers from the paint. Aeryal Rodrigues hit a jumper and sophomore forward Reyn Ferris added two free throws. But the Huskies leading rebounder, got into foul trouble towards the end of the half. After collecting three fouls, coaches Booth and Kline decided to take their chances with an 8-point lead and sit Ferris for the third quarter and save her for the fourth.

For for the second straight game, Mt. Hope’s offense dried up in the third quarter.

Pais called upon to play in Ferris’ stead, had quite a few open looks that slid off the rim as did Savinon and White. Razzino attempted to drive the lane and was called for an offensive foul. The Villa Novans took advantage with Ferris out of the game and scored 10 unanswered points to take a 28-26 lead into the fourth quarter. To make matters worse, Pais looked to injure herself attempting to make a steal in front of the scorer’s table. But the Sophomore shook it off and came out to start the fourth quarter.

Down 30-28, and Ferris back in the game, Savinon inbounded the ball to Razzino who passed to Ferris on the right post. The athletic forward dipped her shoulder, put the ball on the floor and sprang up for a jumper over two Villa Novans to tie the game, 28-28 with 7:30 left to play.

Razzino gave the Huskies a 30-28 lead grabbing an offensive rebound and putting back a jumper with 6:04 to play.

Razzino hit a long range jumper from just inside the three point line to bump the lead to 36-30 with 3:40 left. The Huskies bench, tasting victory, jumped off their seats in a ruckus of cheers as Woonsocket called a time out.

The time out did the trick.

Razzino began to milk the clock, by taking her time dribbling the ball up court. The Villa Novans had multiple chances to tie the game as the Huskies offense waned again.

“We had to stay composed,” said Coach Kline. “We were throwing the ball away and the team was getting nervous. They knew they weren’t playing their game. It was really just talking them off the ledge. We are in this game still. We just have to finish. And their amazing at finishing.”

Coach Kline called a time out with 41 seconds left and a slim 2-point lead. Woonsocket, which hadn’t committed many team fouls, had a few to kill before the Huskies would be put on the free throw line. Savinon inbounded the ball to Razzino and she dribbled the ball around a bit, before Woonsocket fouled her and then took another time out.

The sequence repeated itself and valuable time ticked off the clock. The Villa Novans doubled Razzino this time and Savinon inbounded the ball to Pais and Woonsocket fouled the forward with just 14 seconds left.

Pais drained them both to give the Huskies a 38-34 lead. The Mt. Hope bench went wild as they came out and hugged Pais after Woonsocket took another time out.

Woonsocket attempted a three pointer. It clanged off the rim and Razzino grabbed the rebound. She was fouled dribbling up court and sank one of two free throws to give the Huskies a 39-34 lead with 2 seconds left to play.

“We are real proud of them,” added Coach Booth. “The team has worked hard all season and it’s great to see them get this far.”