The Mt. Hope girls' basketball team beat Lincoln, 52-33, in a D-III semifinals home game Monday night. They will host Woonsocket in the semifinals on Wednesday at 5 p.m. Streaky shooting and terrific … 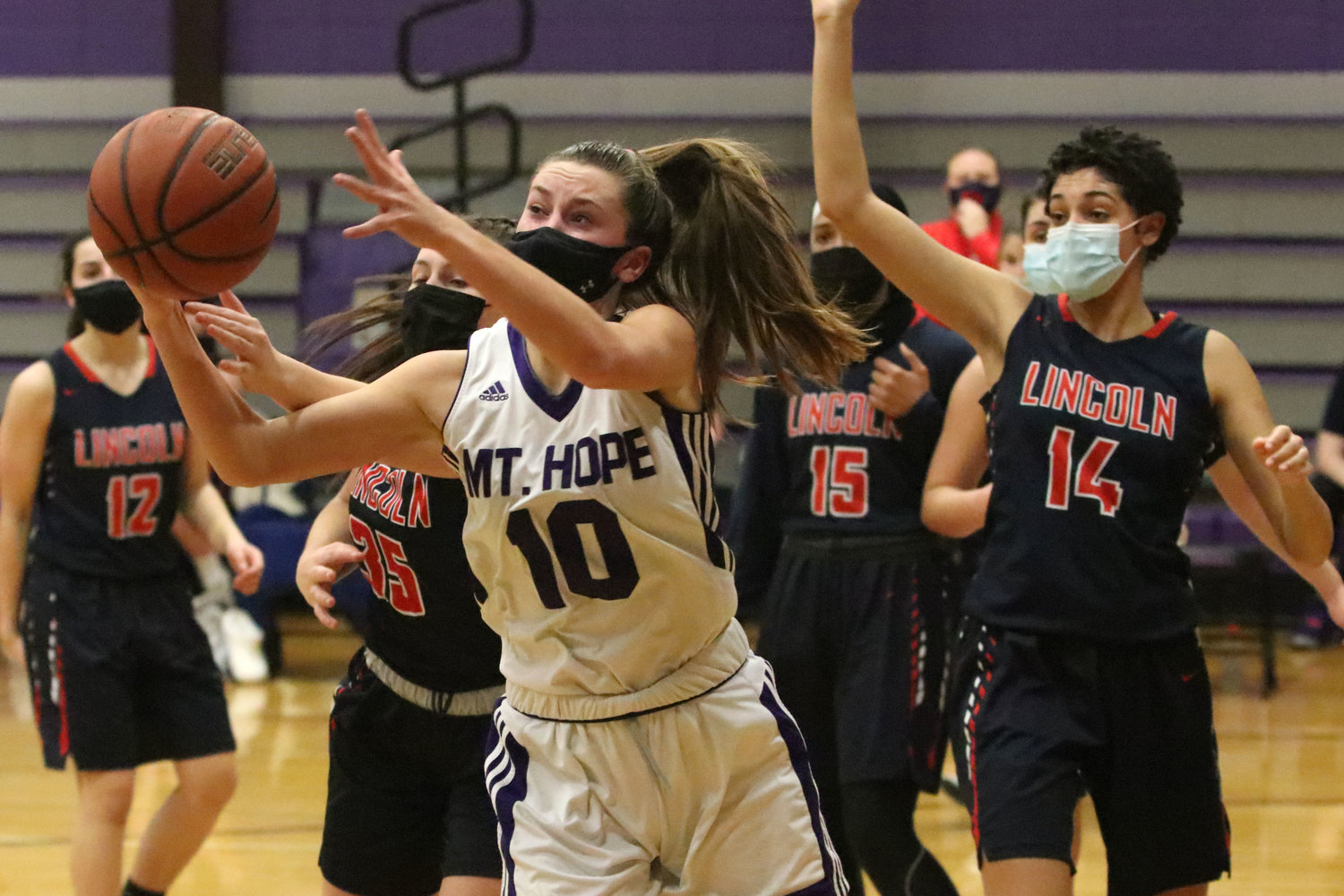 Sophomore forward Reyn Ferris pulls down one of her 16 rebounds during the team's semifinals game on Monday night.
Photos by Richard W. Dionne, Jr. 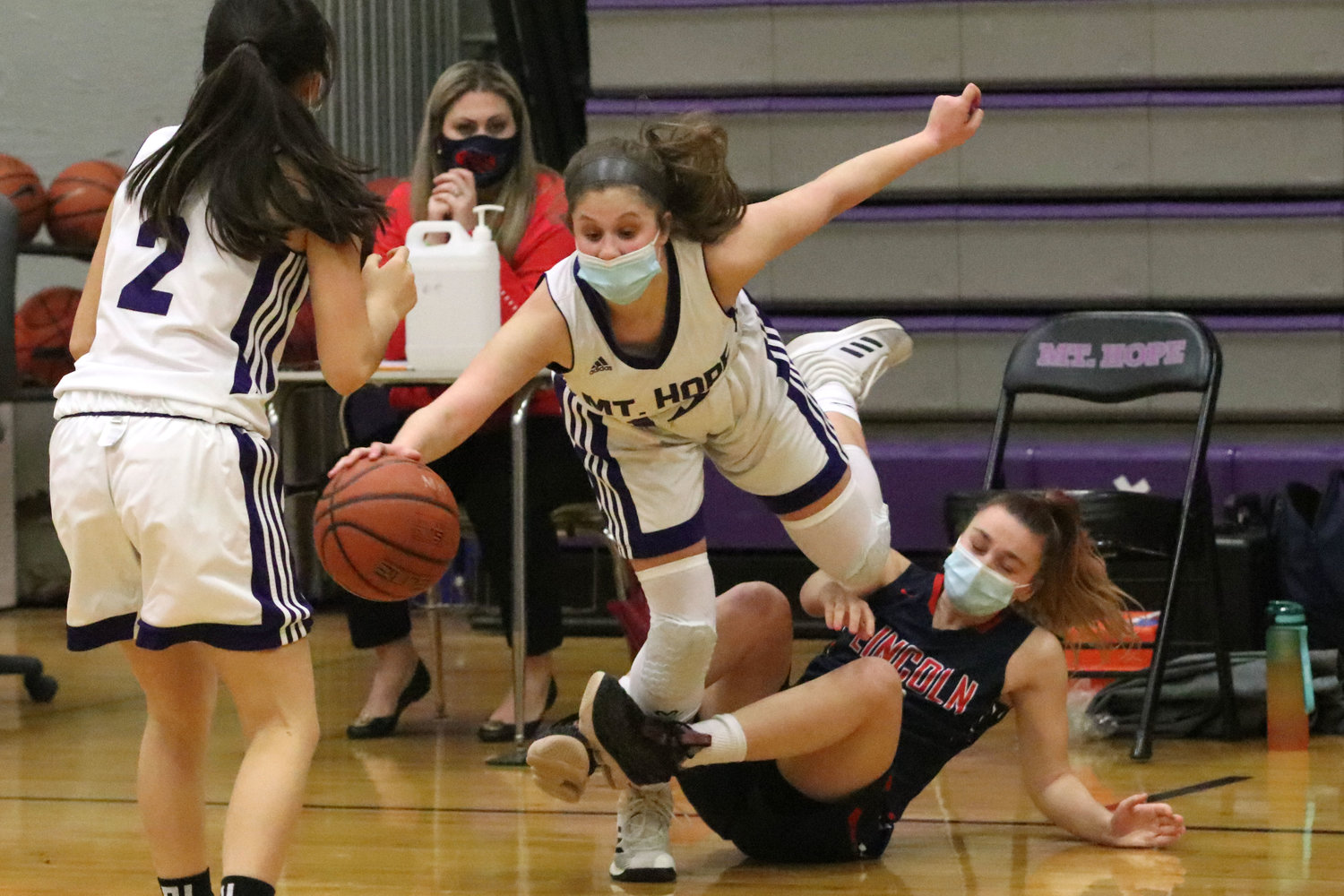 Sophomore point guard Abby Razzino steps over a Lincoln player after stealing the ball along the sidelines in the second quarter. 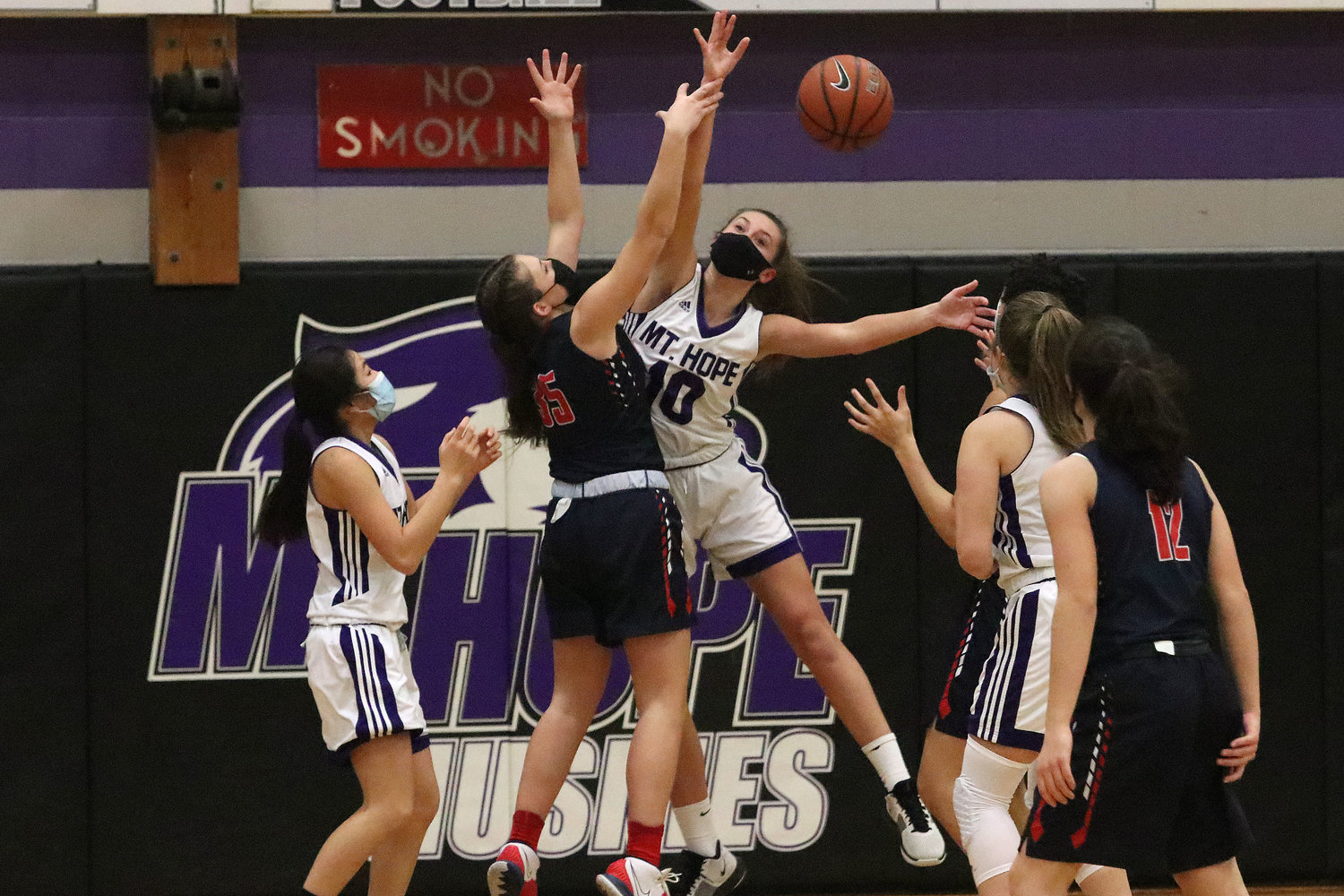 Sophomore Reyn Ferris attempts to block a shot in the first half. 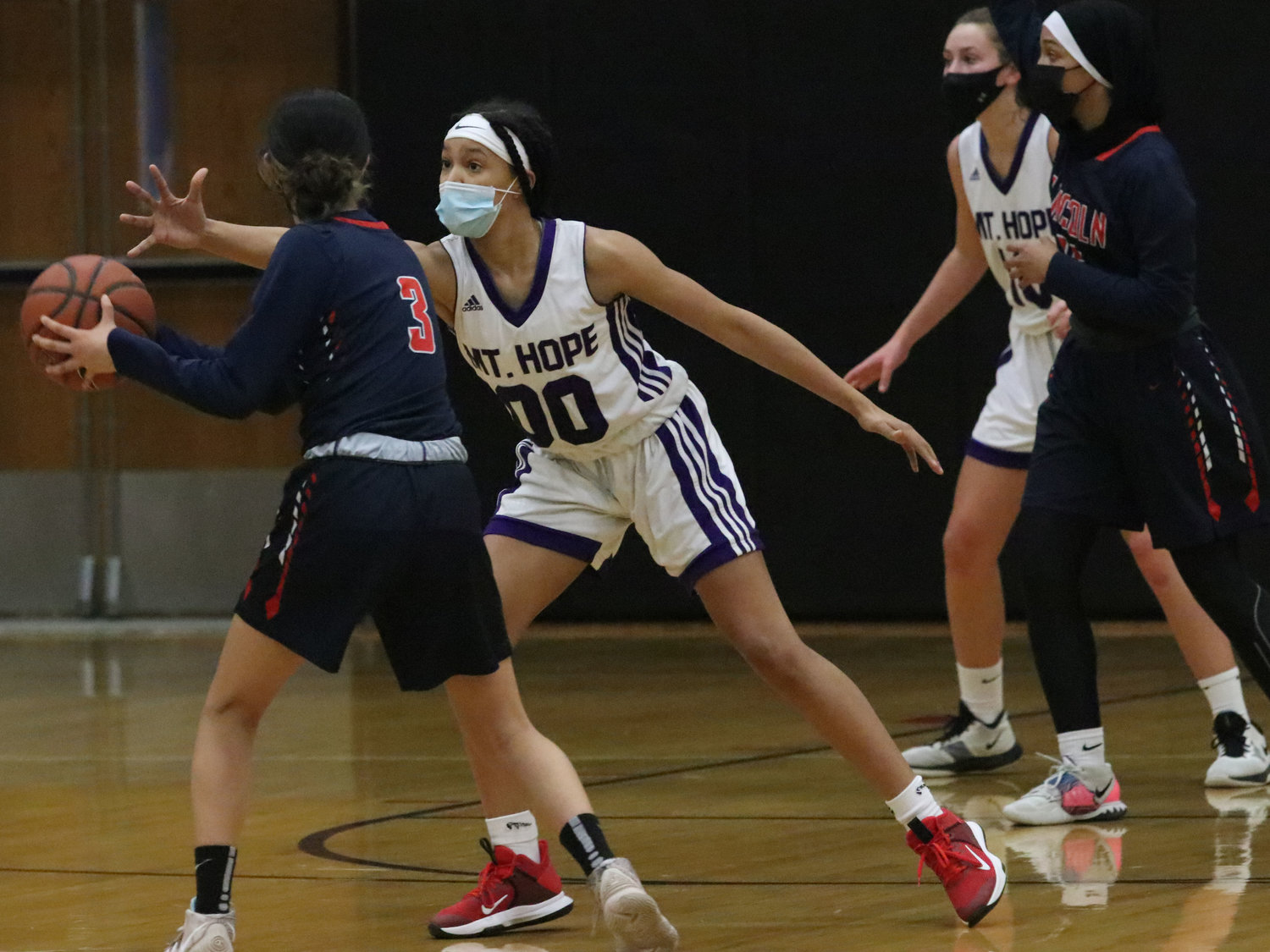 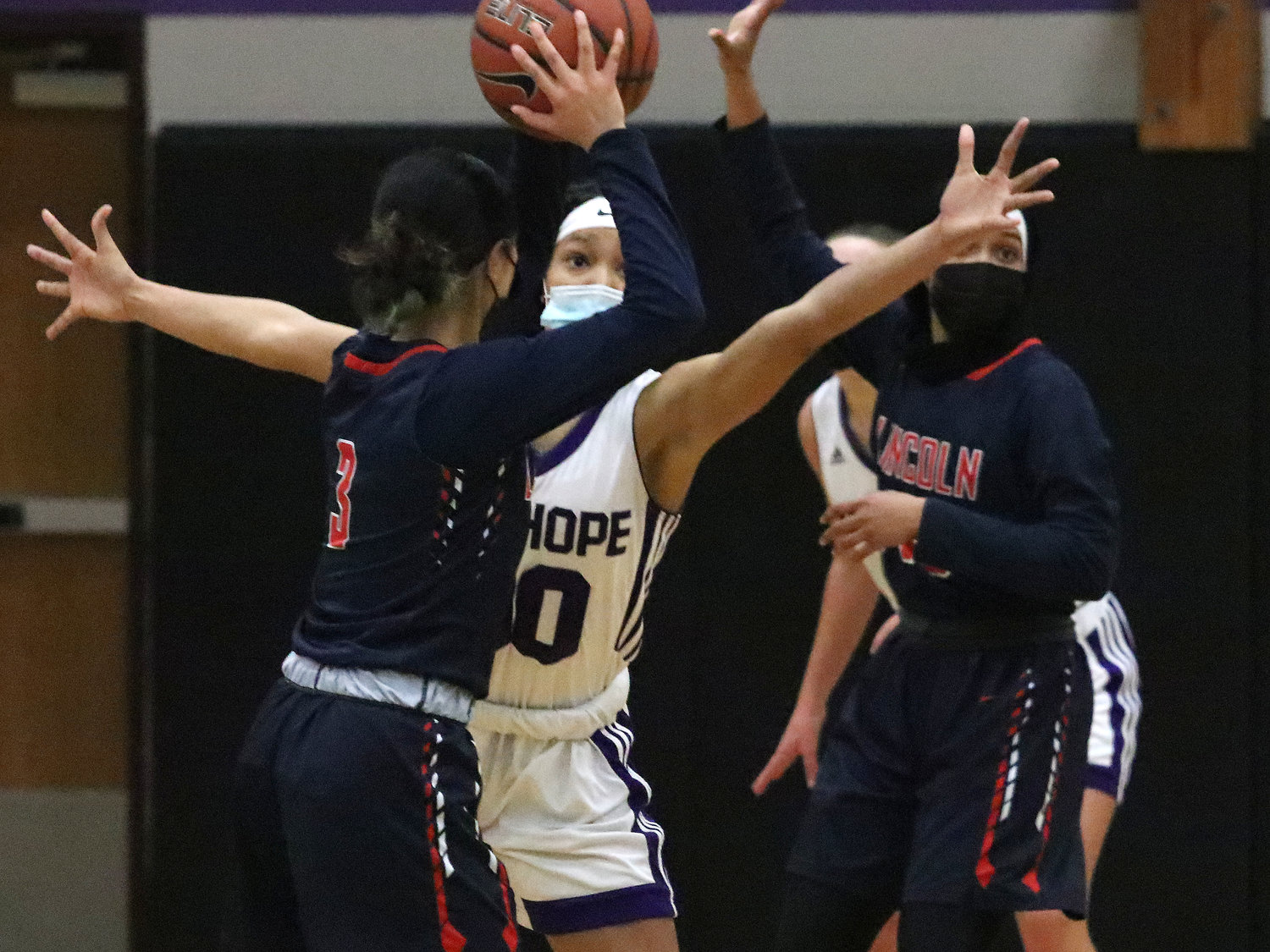 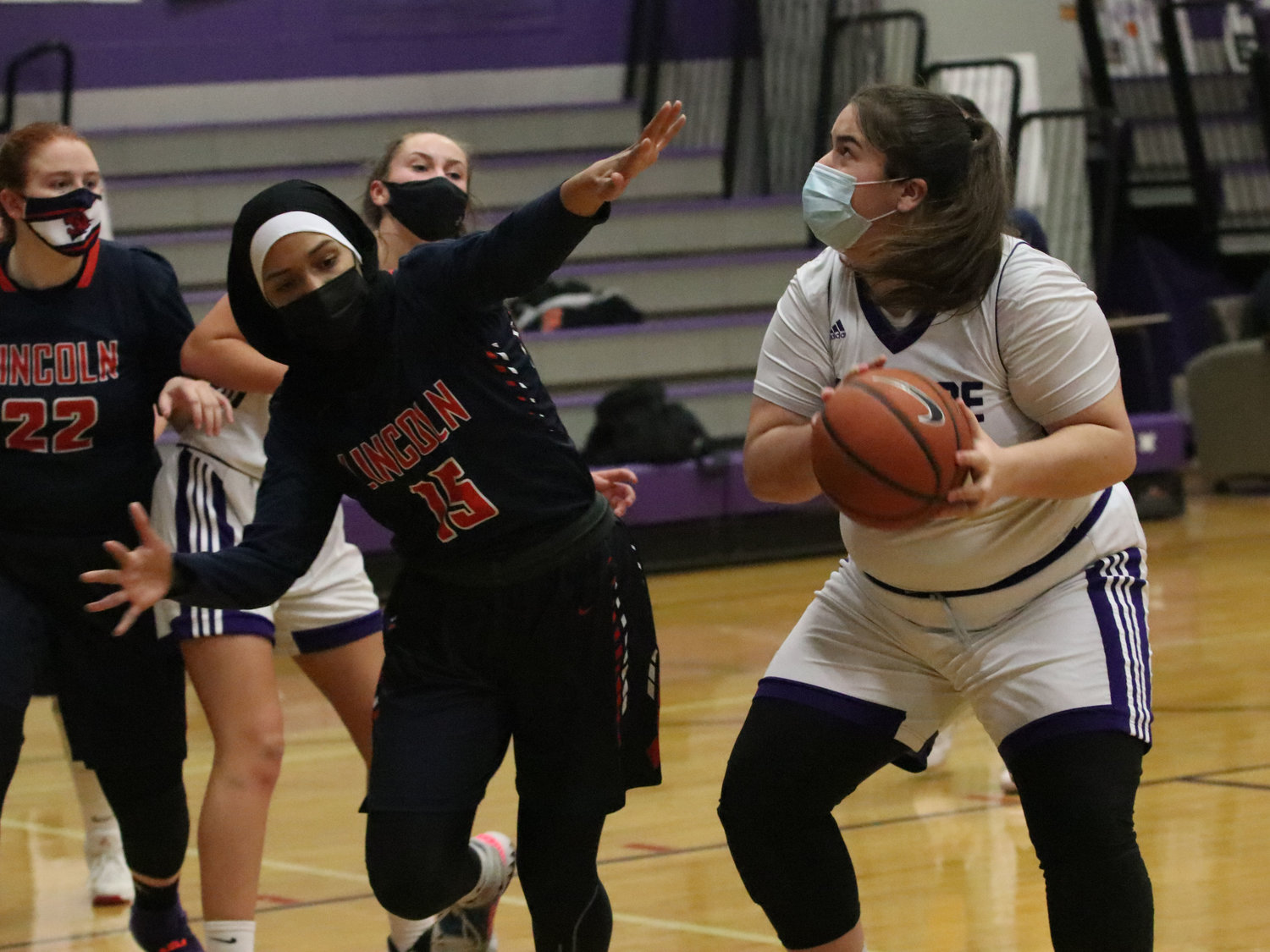 Lauren Pais looks to shoot a jumper in the first quarter. 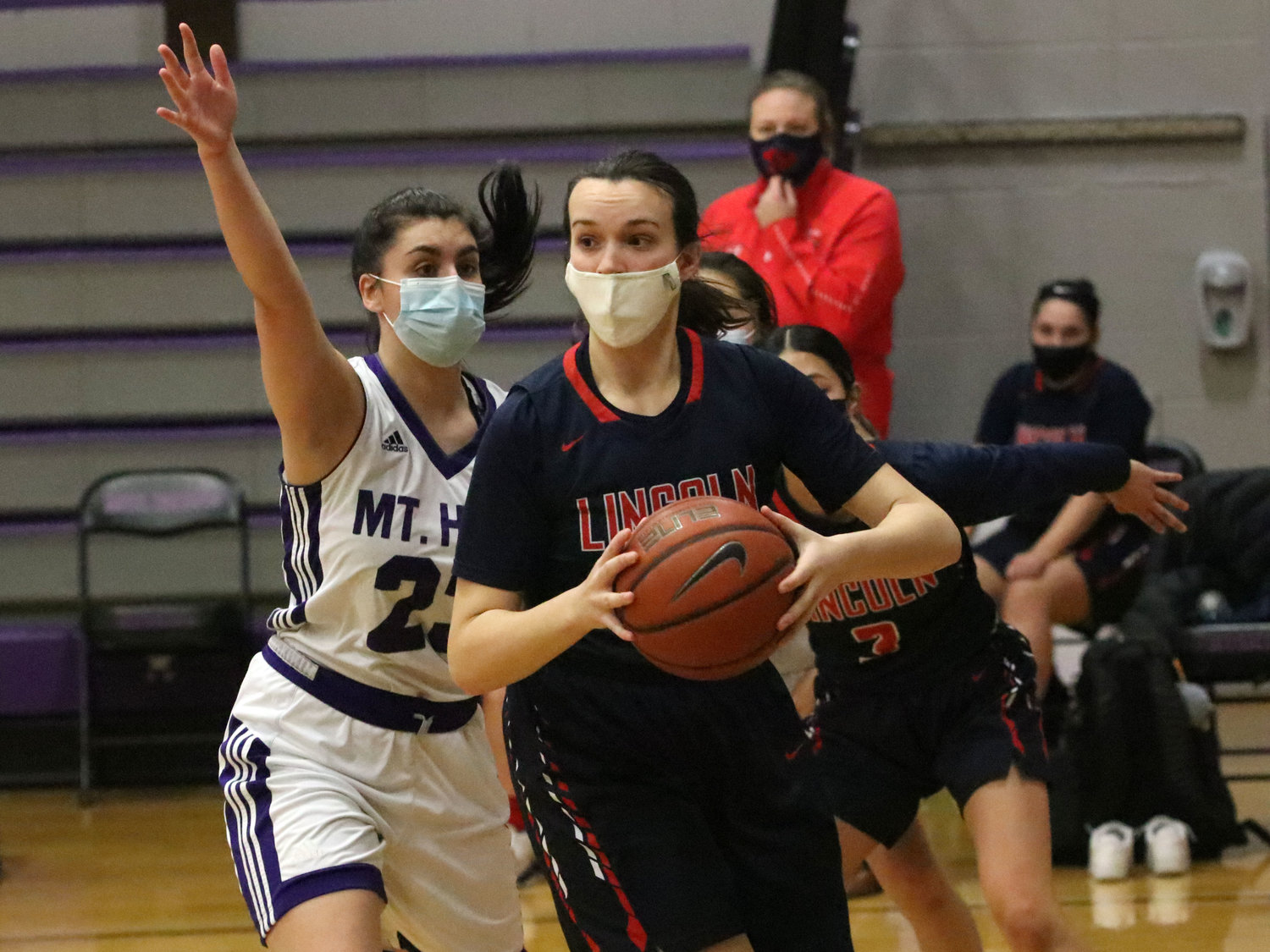 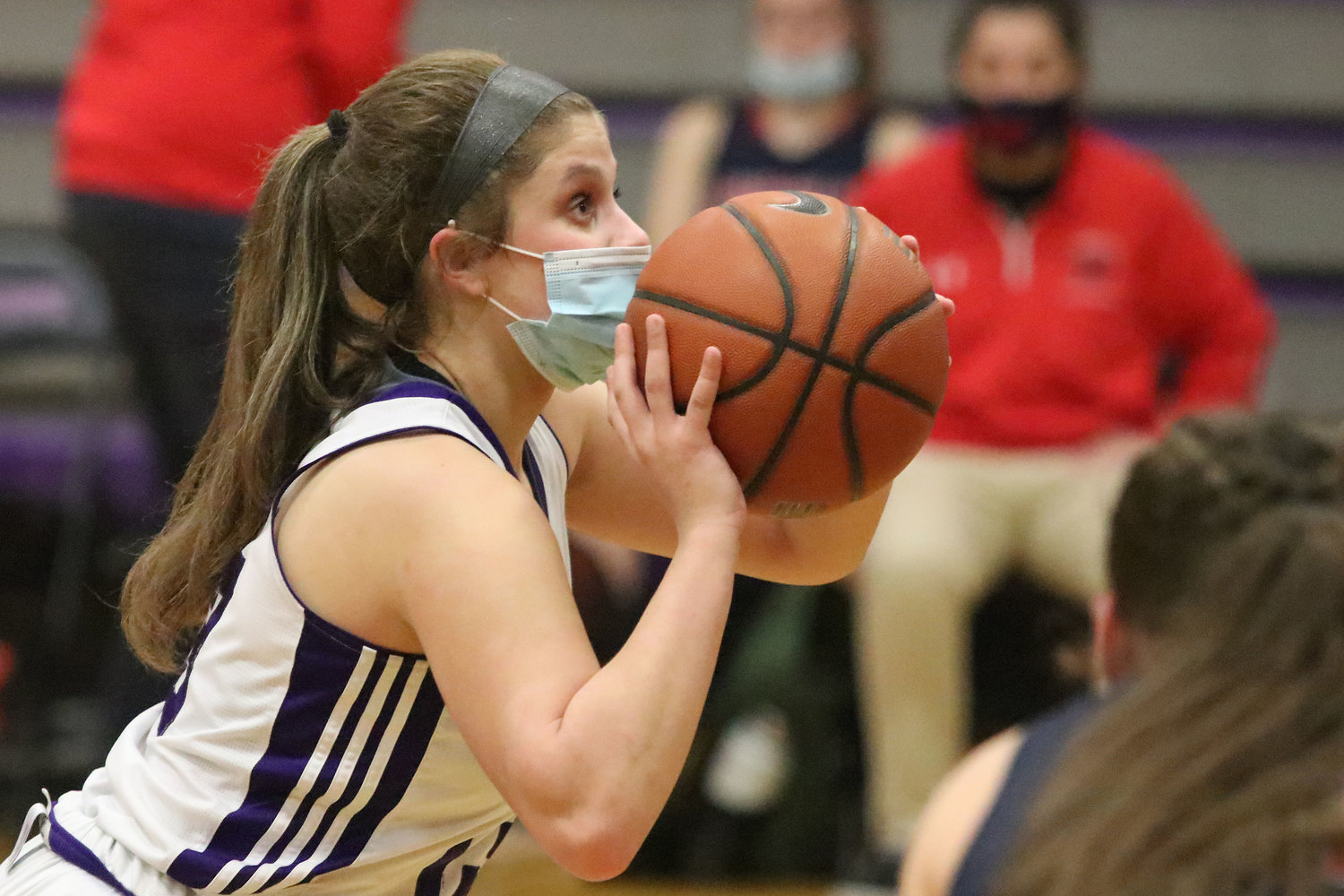 Sophomore point guard Abby Razzino lines up a free throw in the first half. 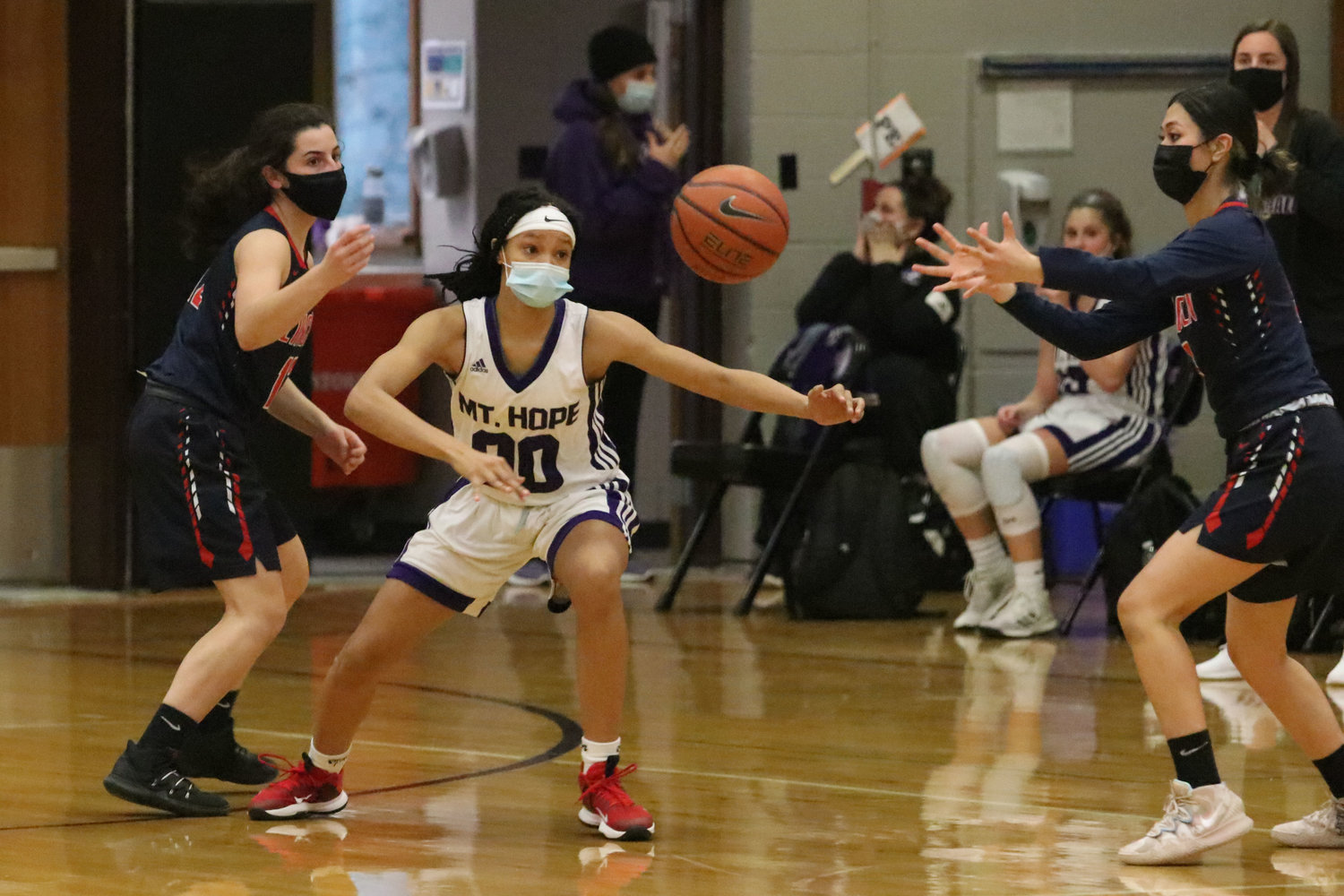 Junior Laura Johnson-Hoffman looks to steal a pass in the second quarter. 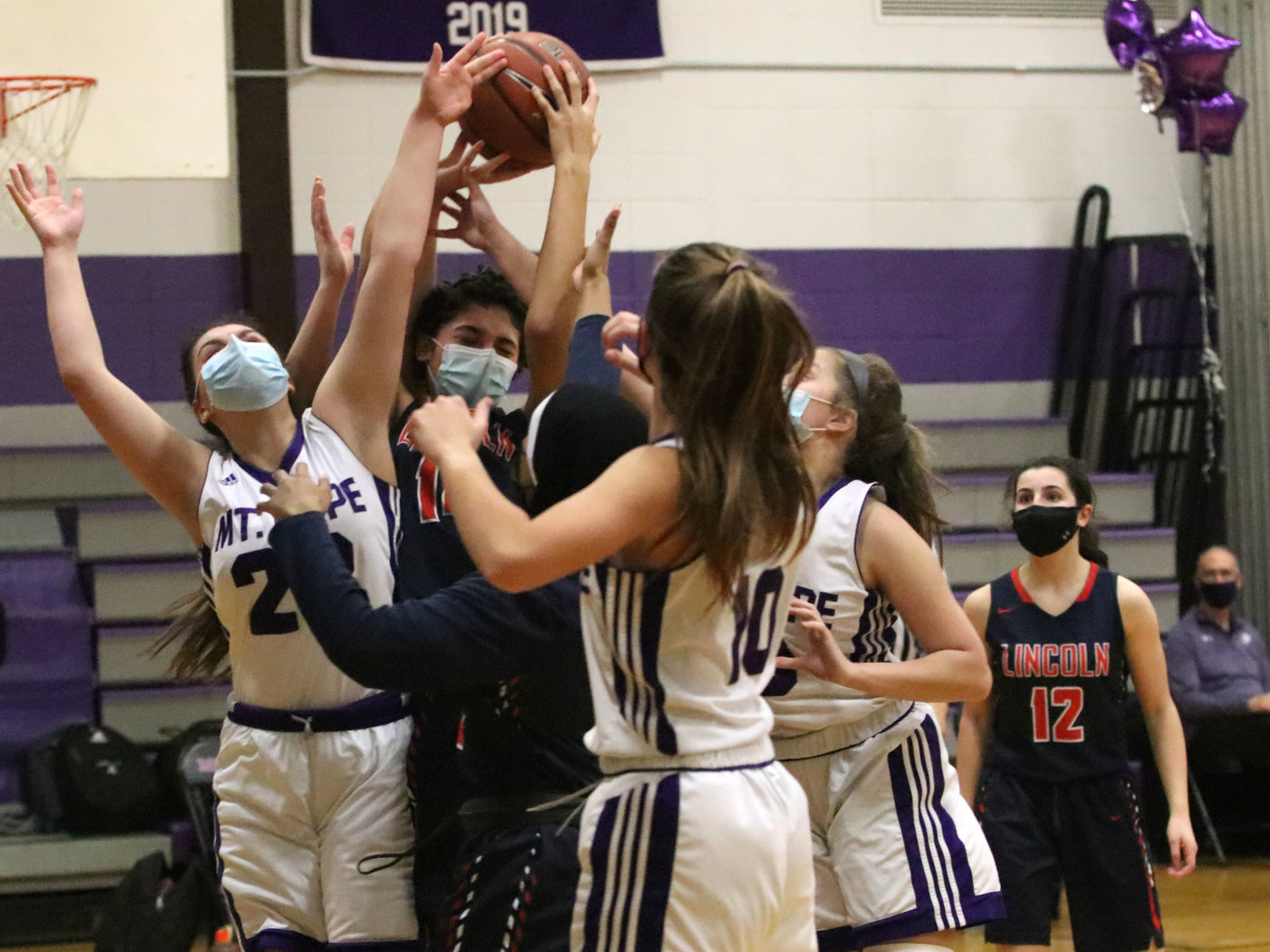 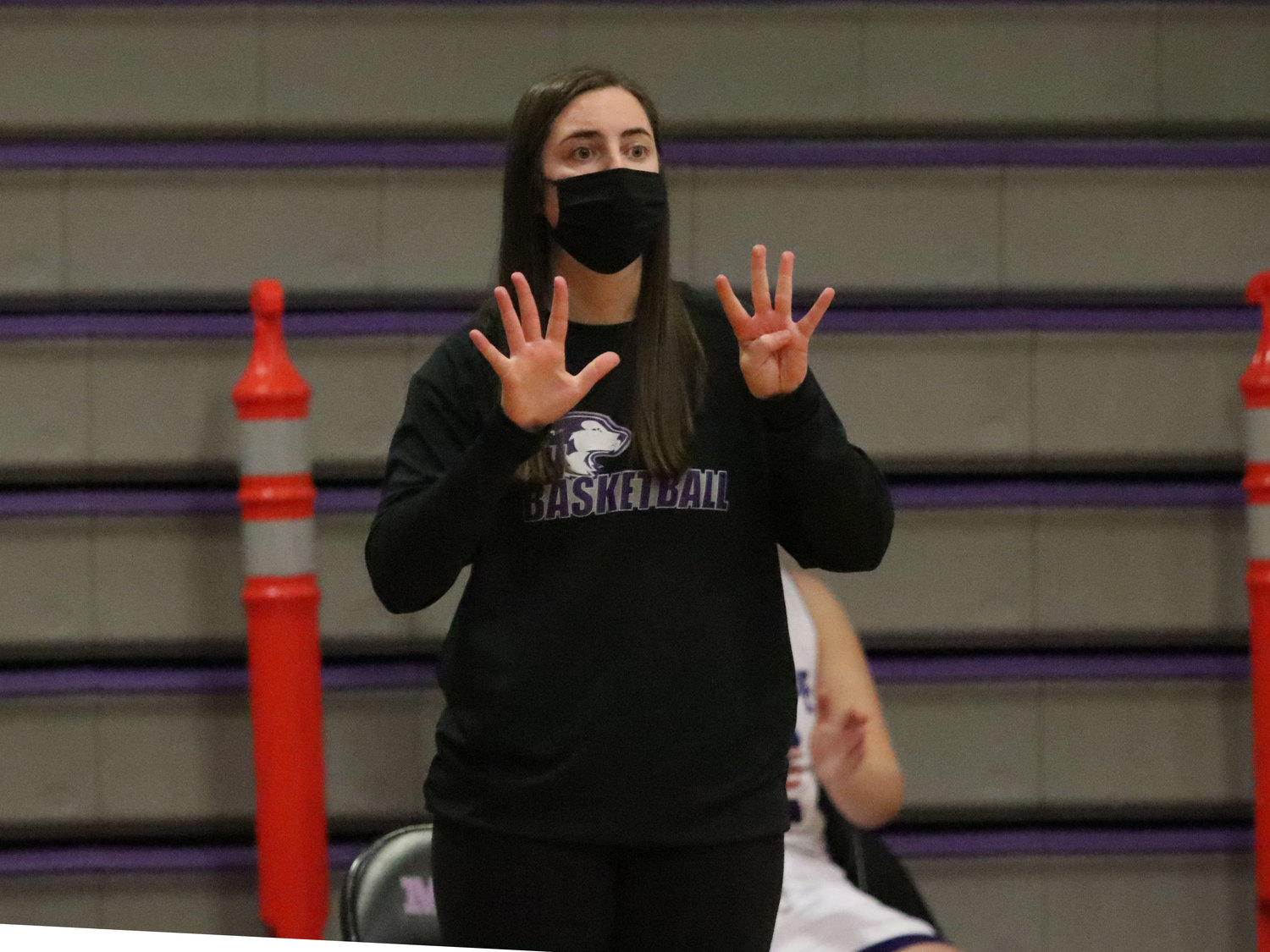 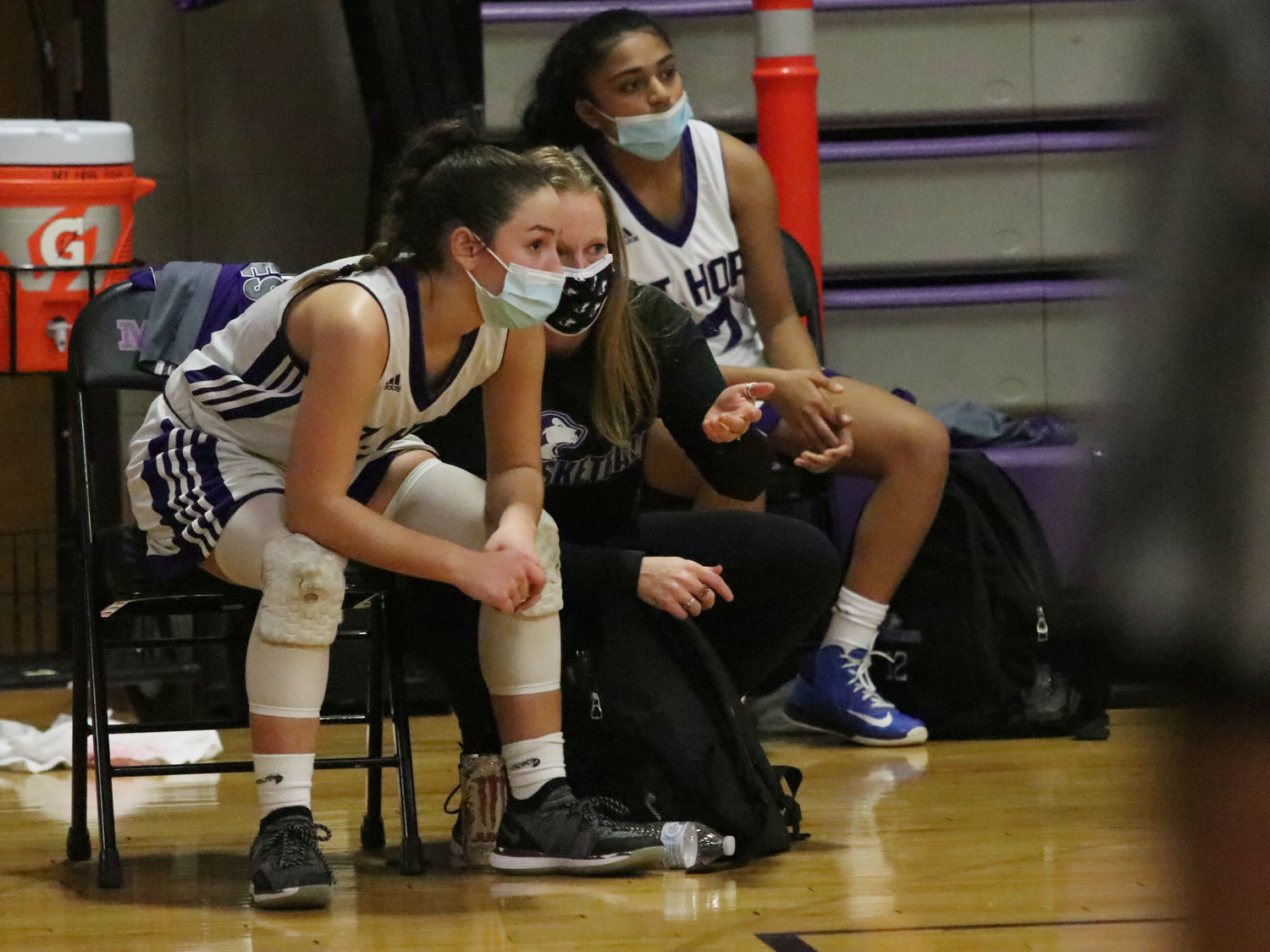 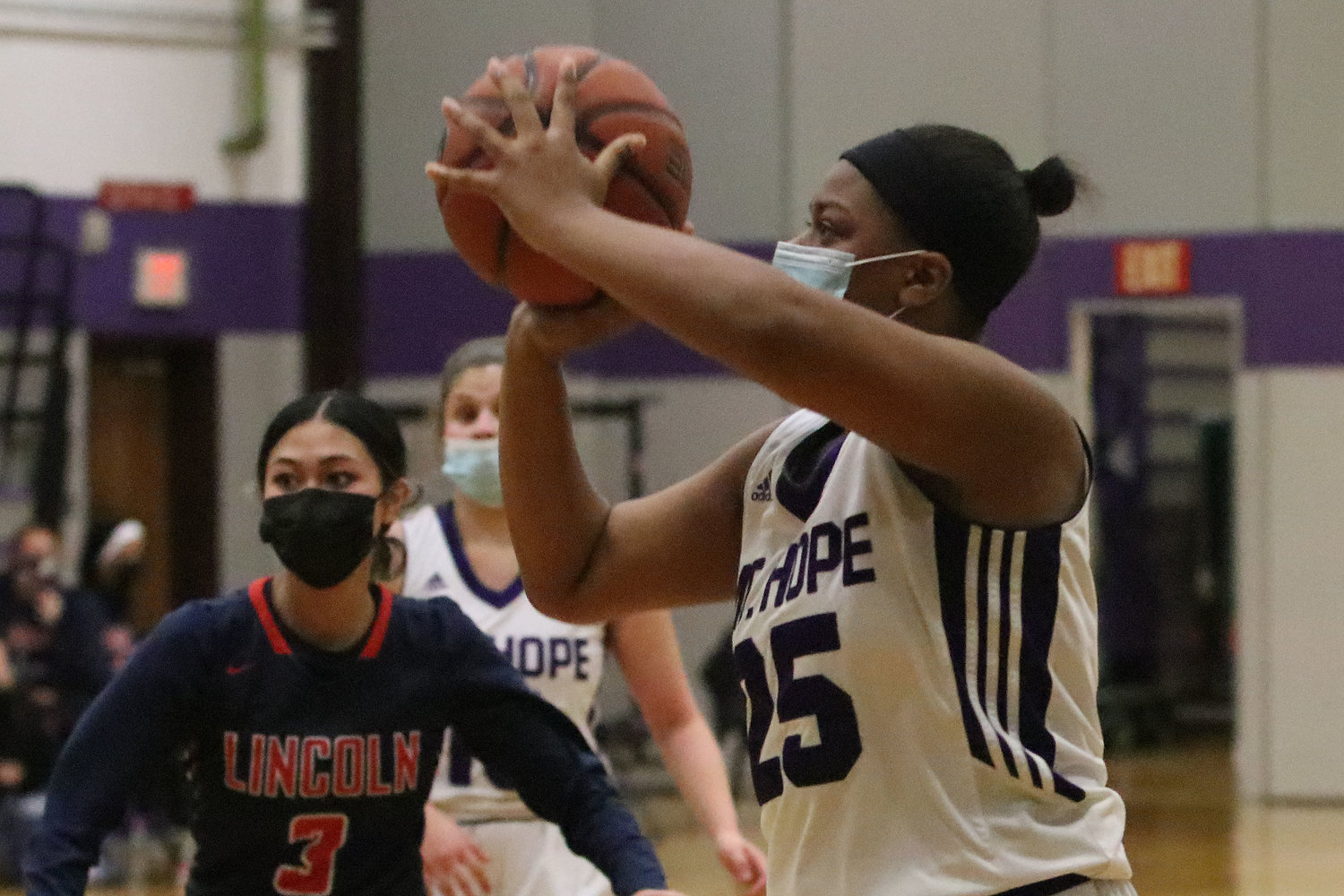 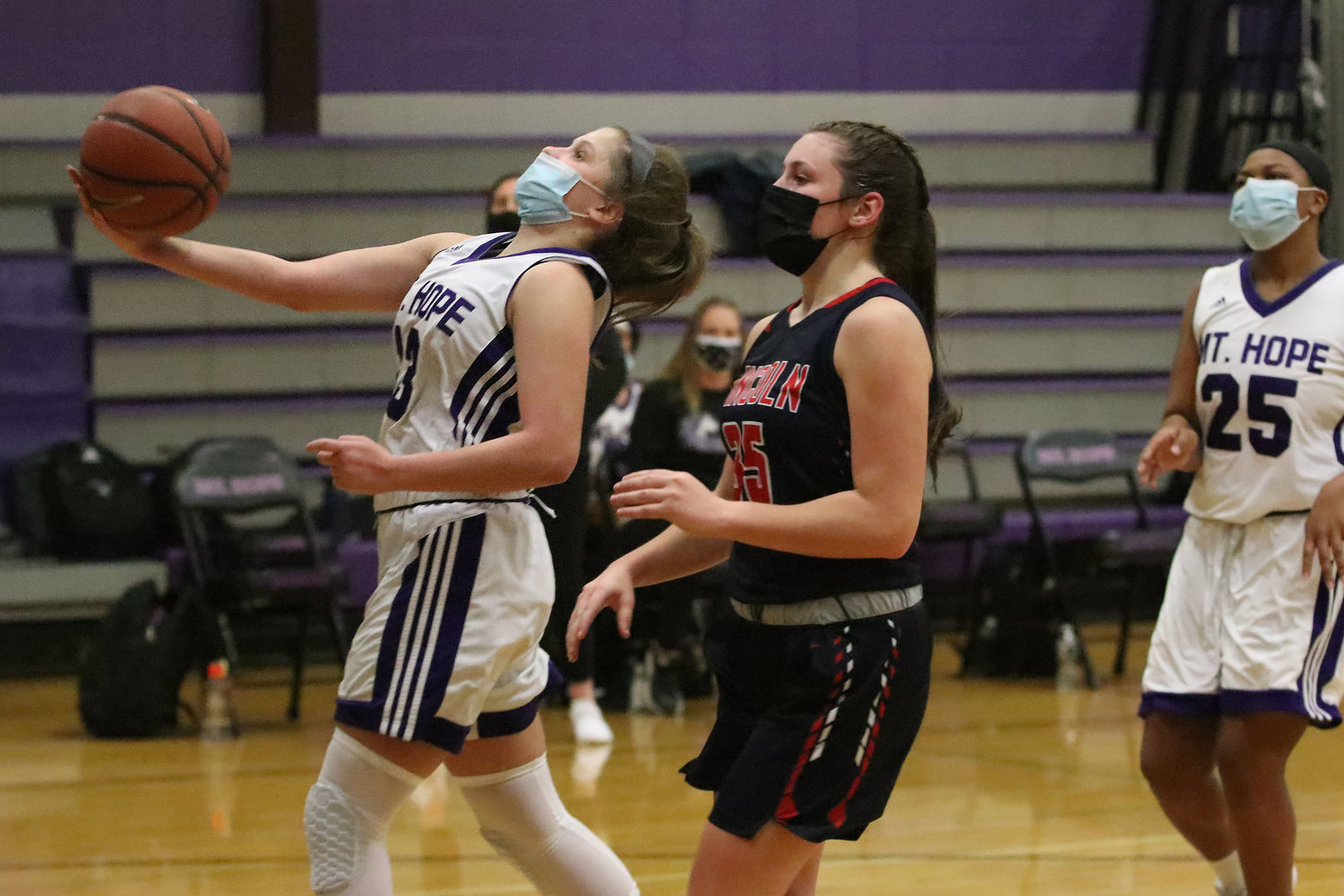 Sophomore point guard Abby Razzino drives in for a layup in the third quarter. 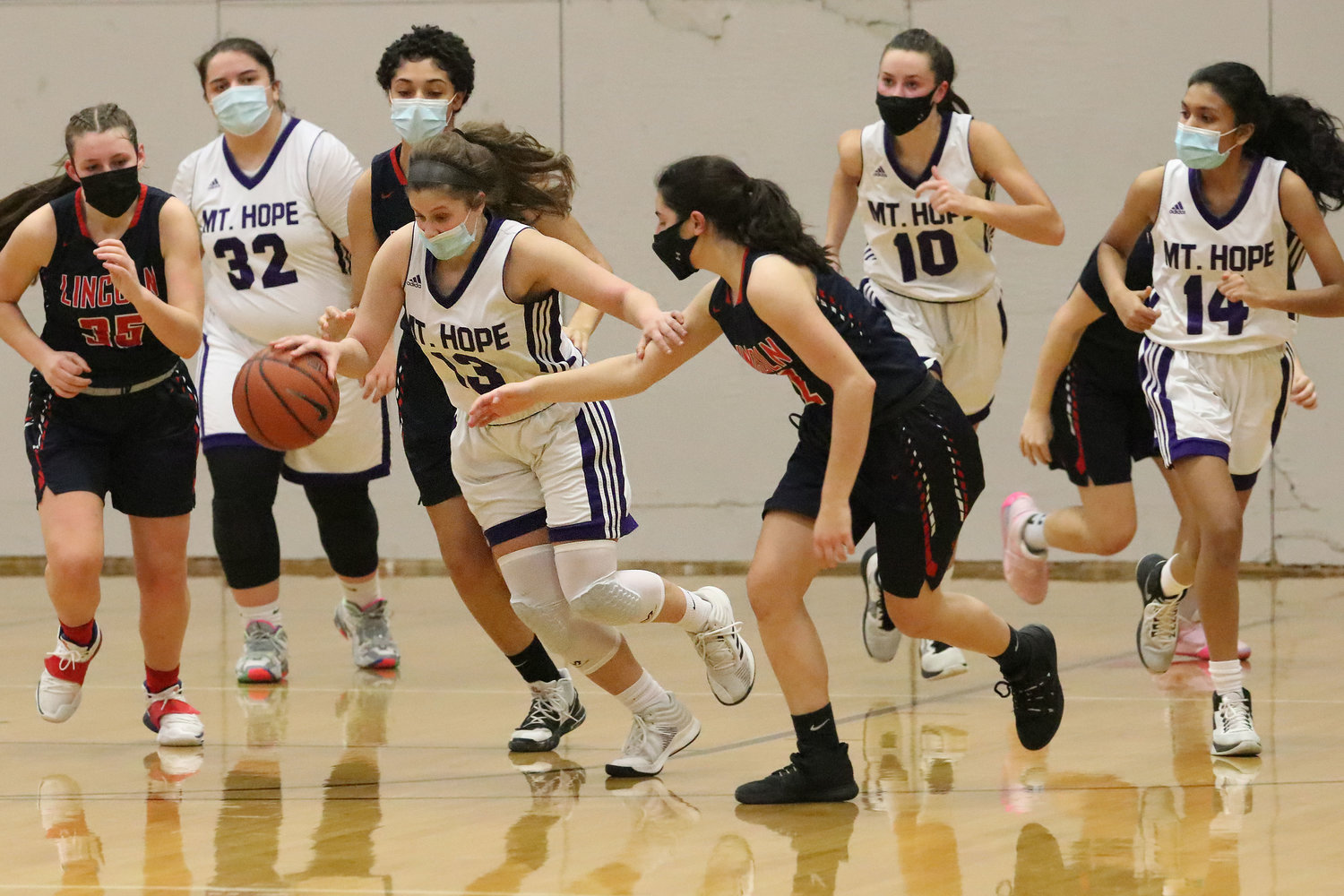 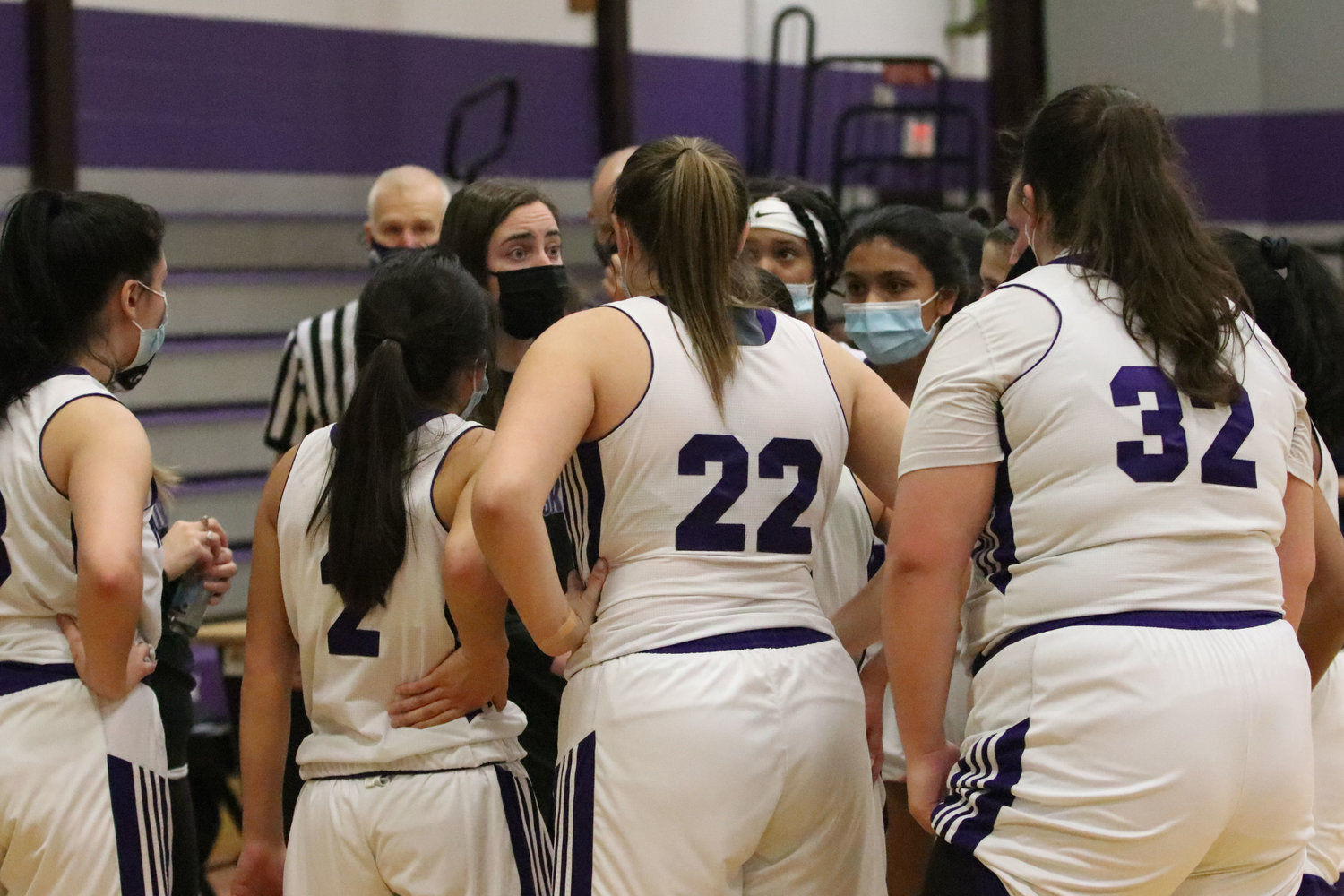 Coach Katie Kline speaks to the team during a time out. Elsa White (left) and Isabel Savinon celebrate with teammates after the win. 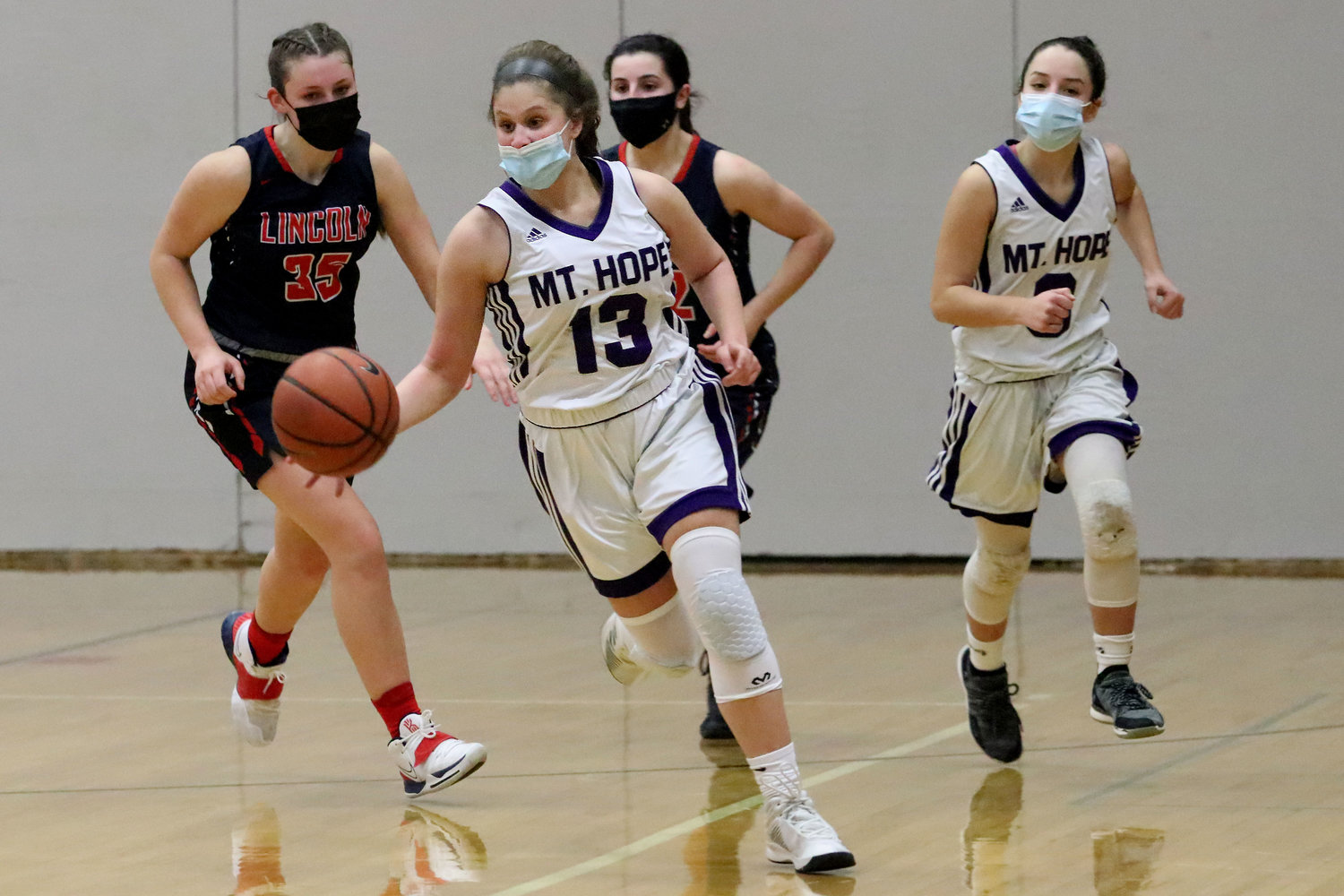 The Mt. Hope girls' basketball team beat Lincoln, 52-33, in a D-III semifinals home game Monday night. They will host Woonsocket in the semifinals on Wednesday at 5 p.m. Streaky shooting and terrific team defense did the trick for the undefeated Huskies, who now boast a record of 8-0.

“It was a hard-fought game,” said Coach Katie Kline. “The girls played really well in the first half.”

The Huskies defense created turnovers all game long by blocking shots, making steals and grabbing rebounds. Sophomore forward Reyn Ferris stood tall under the basket at both ends of the court, bringing down 16 boards and netting eight points.

“She battled under the basket,” added Coach Kline. “She didn’t give up on anything. She goes to the floor for the ball. She earned every one of those rebounds tonight.”

Sophomore point guard Abby Razzino was the team’s spark plug, leading the Huskies with 21 points. Razzino played hard-nosed defense and scored when the team needed a tough basket down the stretch.

“We have been building off of our defense all year and I think the Abby is a good example of that,” Coach Booth said. “She really looks for the ball defensively and it turns into her offense. In the second half, she did that a few times which was a real key. She sparks the rest of the girls.”

“Elsa started off very strong,” Coach Booth said. “She had ten very quick points. It was great to see her look comfortable and feel the freedom to shoot.”

Razzino scored seven points in the second quarter, sinking a three, a jumper, and two foul shots. Aeryal Rodrigues and Amani Jackson each drained jumpers as the Huskies walked off the court with a 29-16 halftime lead.

In the third quarter the Huskies went cold. The team began launching threes but shot after shot missed or clanged off the rim.

“Our press in the third quarter is really what kept us in the game,” said Coach Kline. “We got a lot of steals off that. Even though our shots weren’t falling, they weren’t scoring either.”

During the cold streak, Lincoln finally broke through and scored six straight points, cutting the Huskies' lead to 29-22 with 4:22 left in the third quarter.

Coach Kline called a time out and told the team that the game wasn’t over. “Lincoln just got themselves back in the game,” she said.

“That got the team to turn on their motors and get more aggressive.”

Ferris put the Huskies back on the scoreboard with a put-back jumper, after a Savinon three attempt, to stretch the lead to 32-22.

Razzino stole the ball at mid court on Lincoln’s next possession. She scooped the ball to White who passed to Ferris standing on the sideline by the Huskies bench. Ferris looked in then zipped a pass to Razzino as she got into position on the three point line. The point guard took the pass and in one motion launched a three. Swish, all net to give the Huskies a 34-25 lead with 3:27 left in the third quarter.

Lincoln cut the lead again, closing to 29-34 with 2:18 to play in the quarter. But Razzino fought back, this time driving the lane and collecting a foul. She made them both for a 36-29 lead.

Razzino kept scoring in the fourth quarter. The point guard sank another three and a jumper, but this time she had help from her teammates. Ferris added two put backs, Scrappy senior Isabel Savinon hit a three, white netted an easy layup and Pais added two for a 16 point fourth quarter and a 52-33 Huskies win.