The Mt. Hope boys cross country team beat East Providence and Tiverton in a home dual meet at the Bristol Town Beach on Monday, to start the season off at 2-0.  The Huskies took the first six … 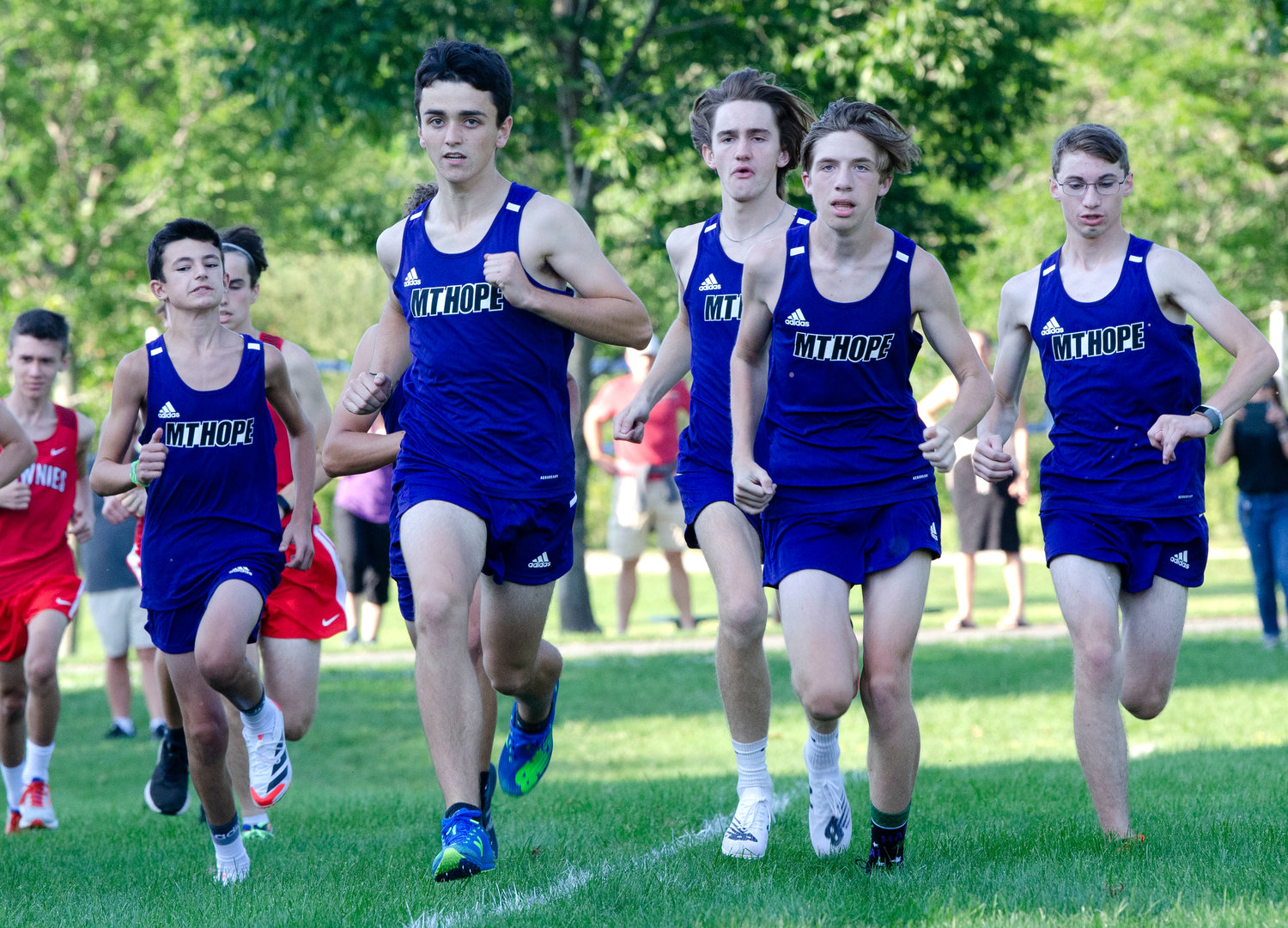 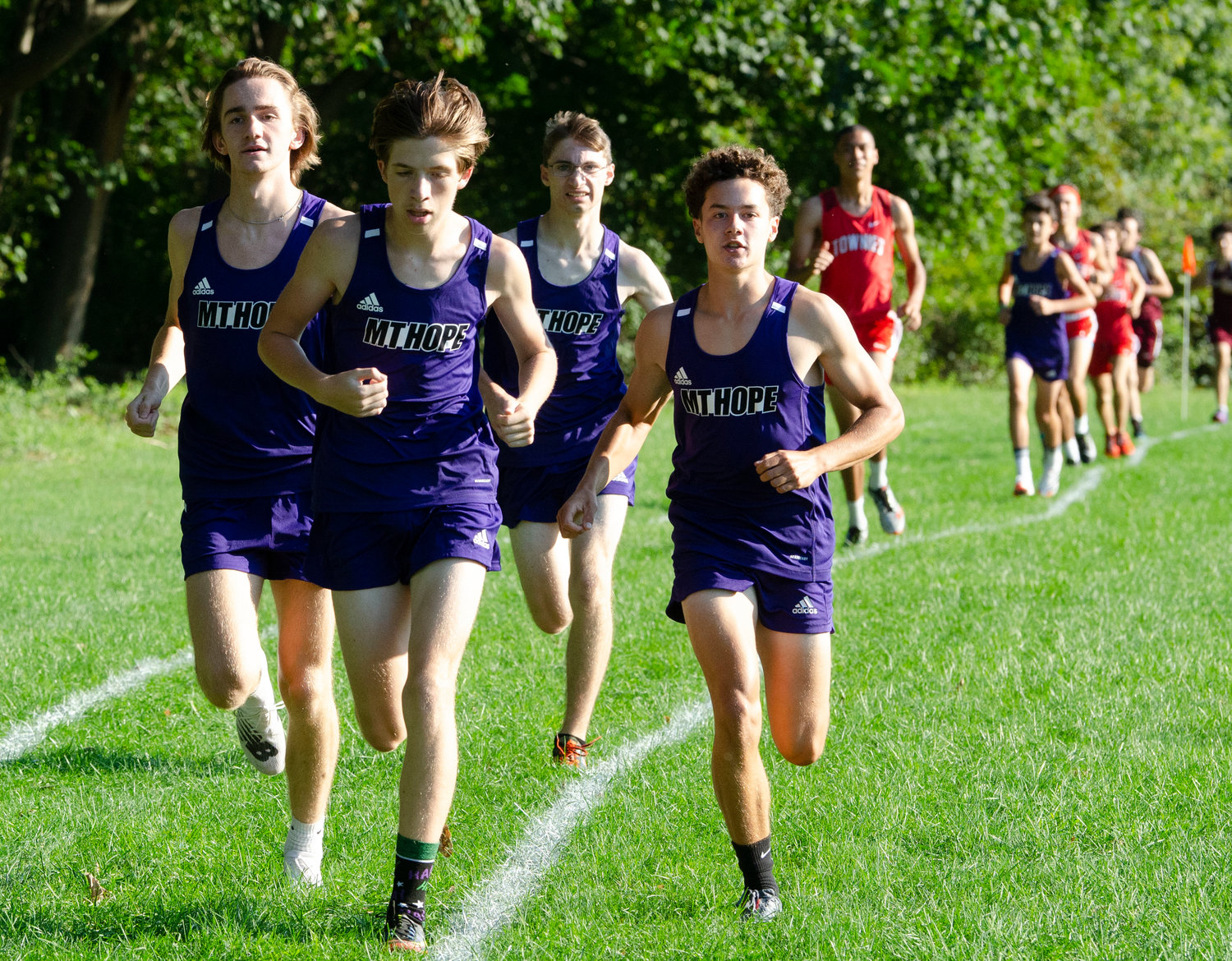 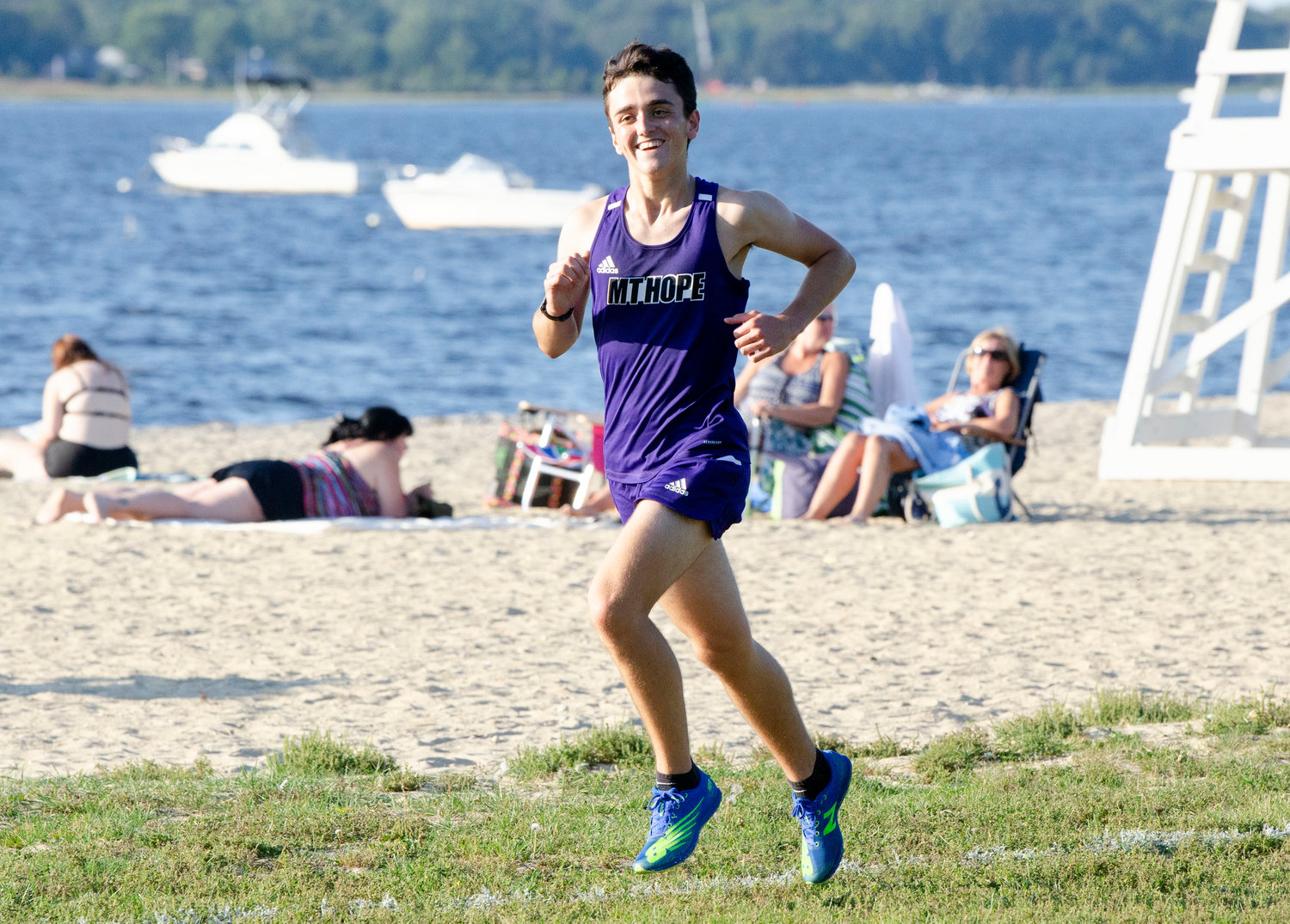 Mt. Hope senior Sam Merriam crosses the beach towards the finish line leading the 25 man field. he placed first with a time of 18:40.
Photos by Richard W. Dionne, Jr. 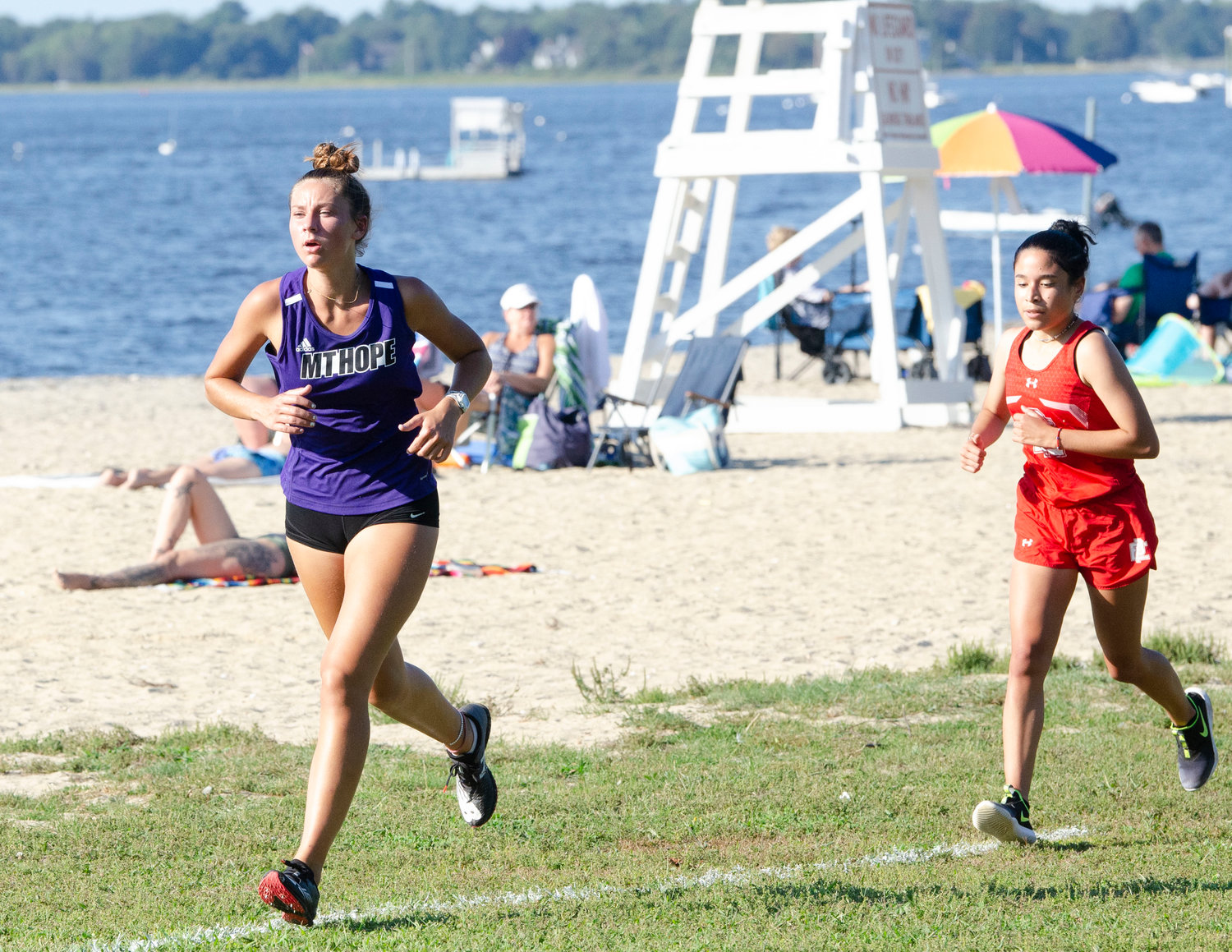 Reyn Ferris (left) runs by the beach to the finish line. She placed seventh.
Photos by Richard W. Dionne, Jr. 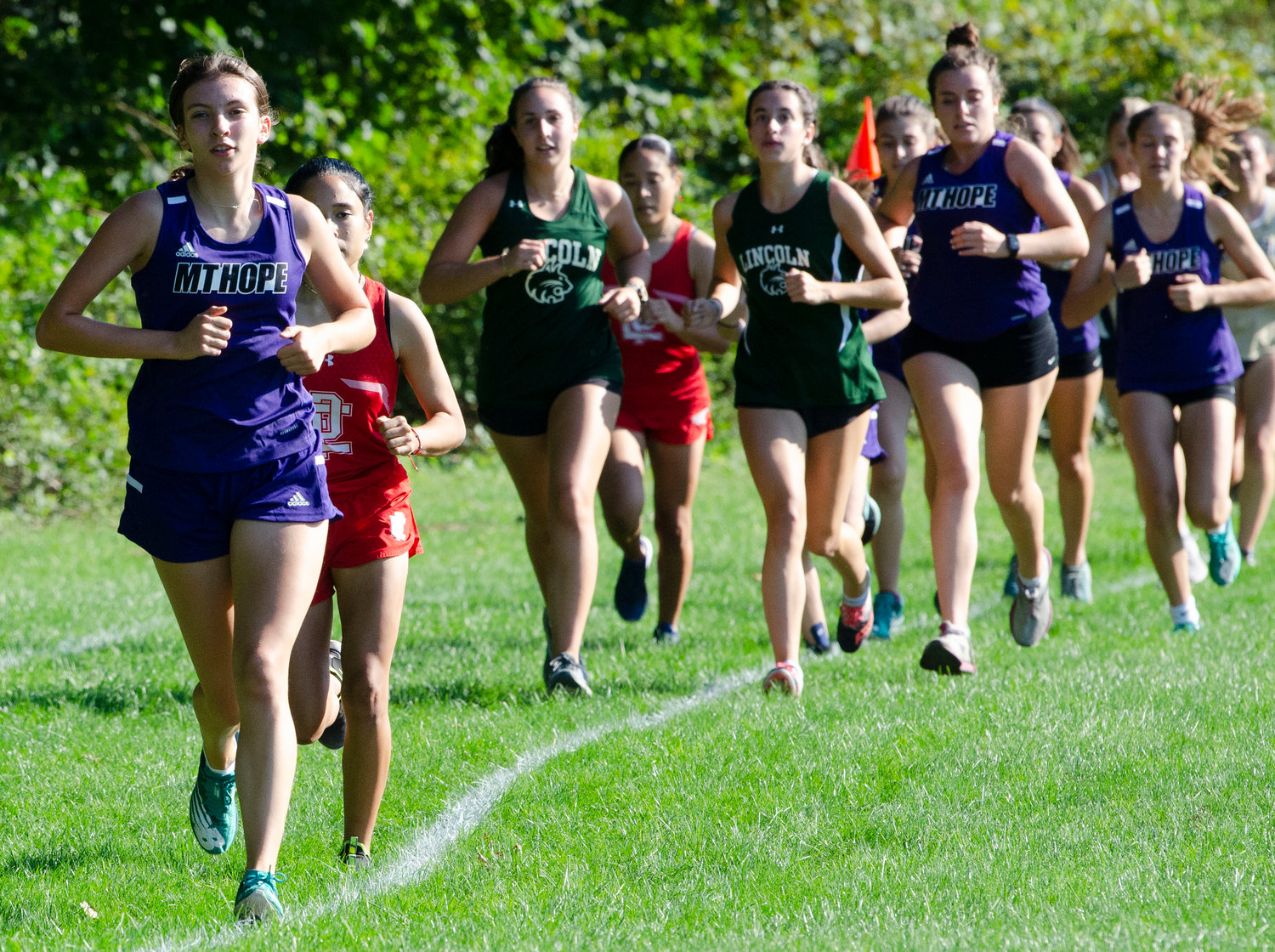 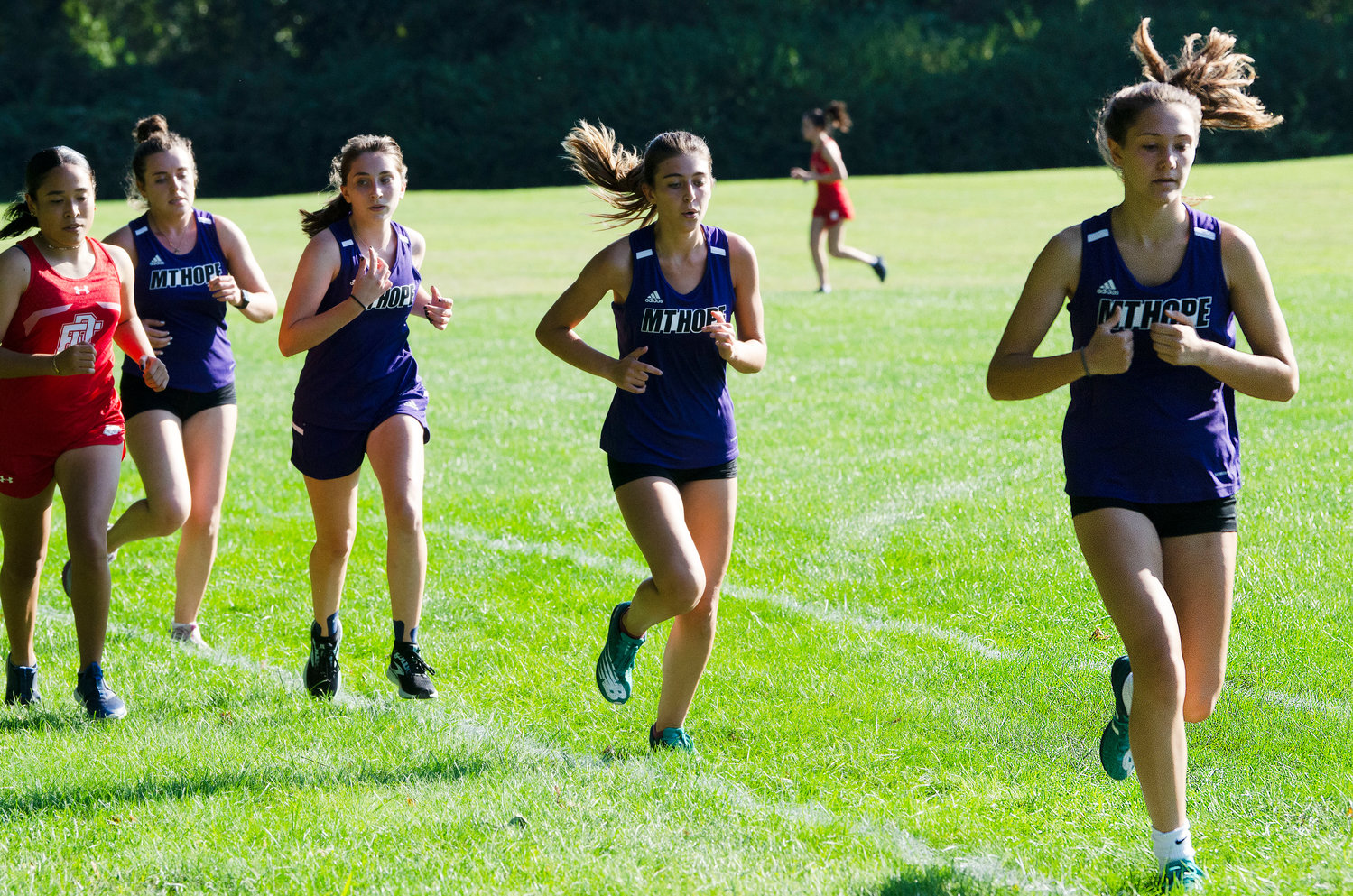 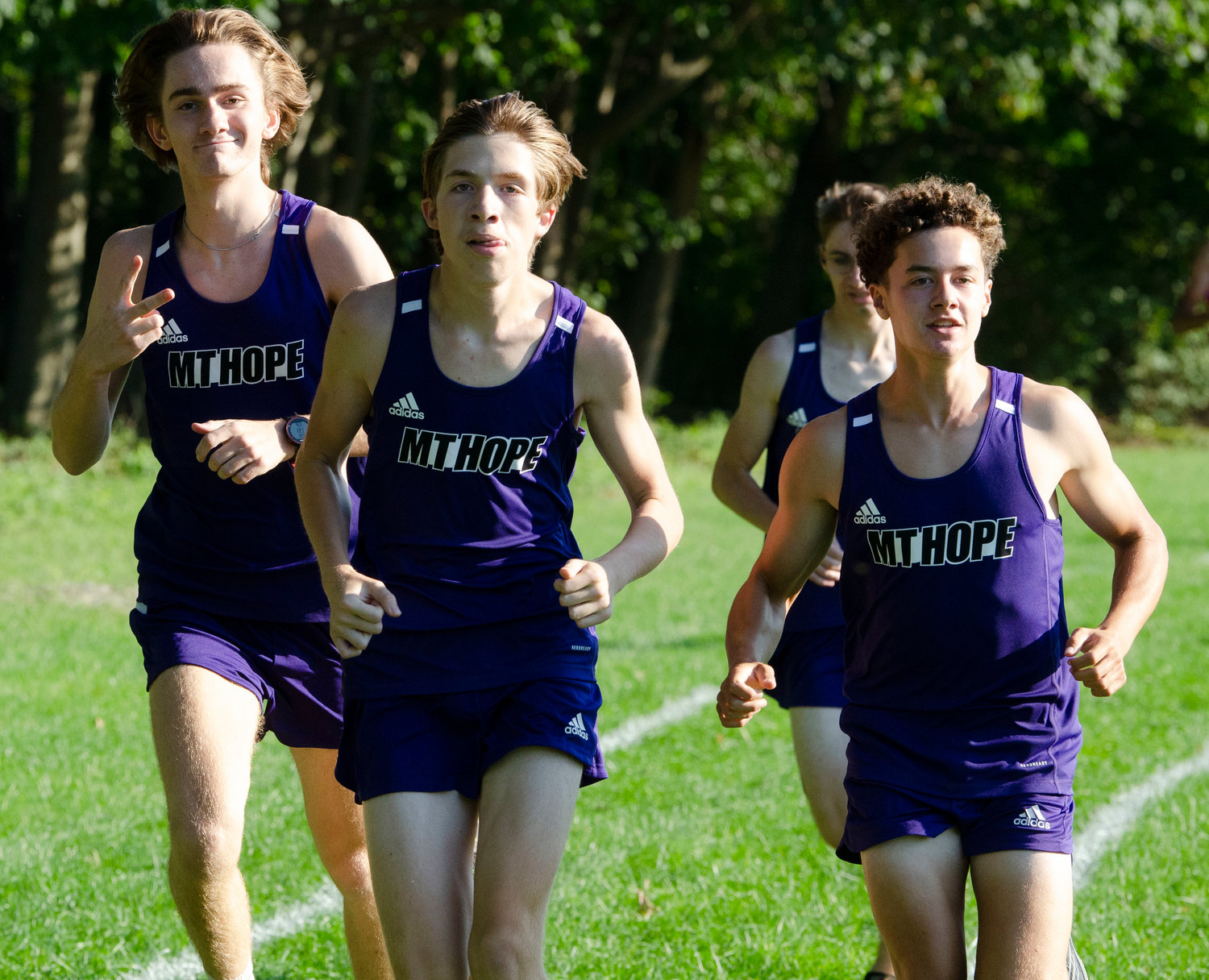 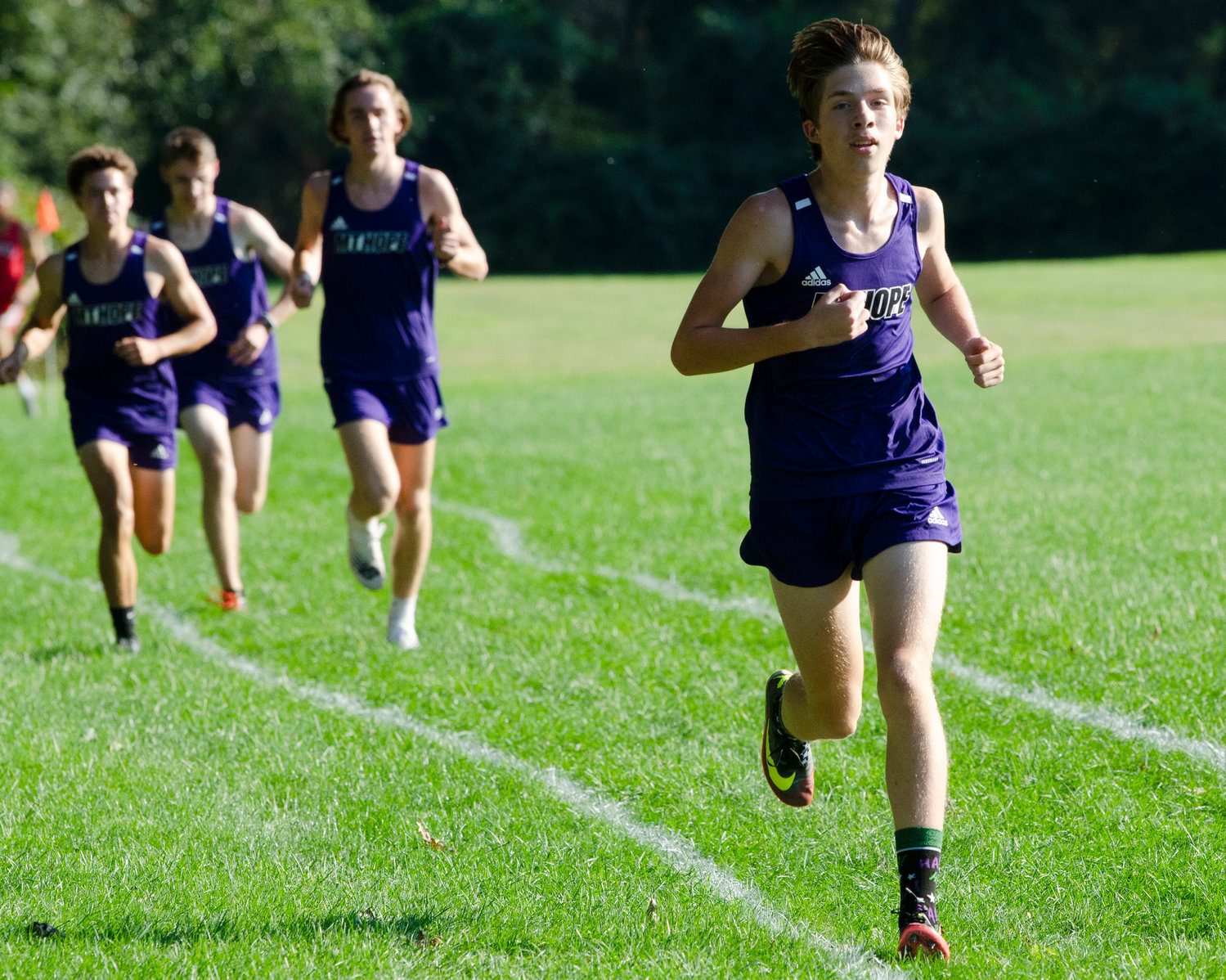 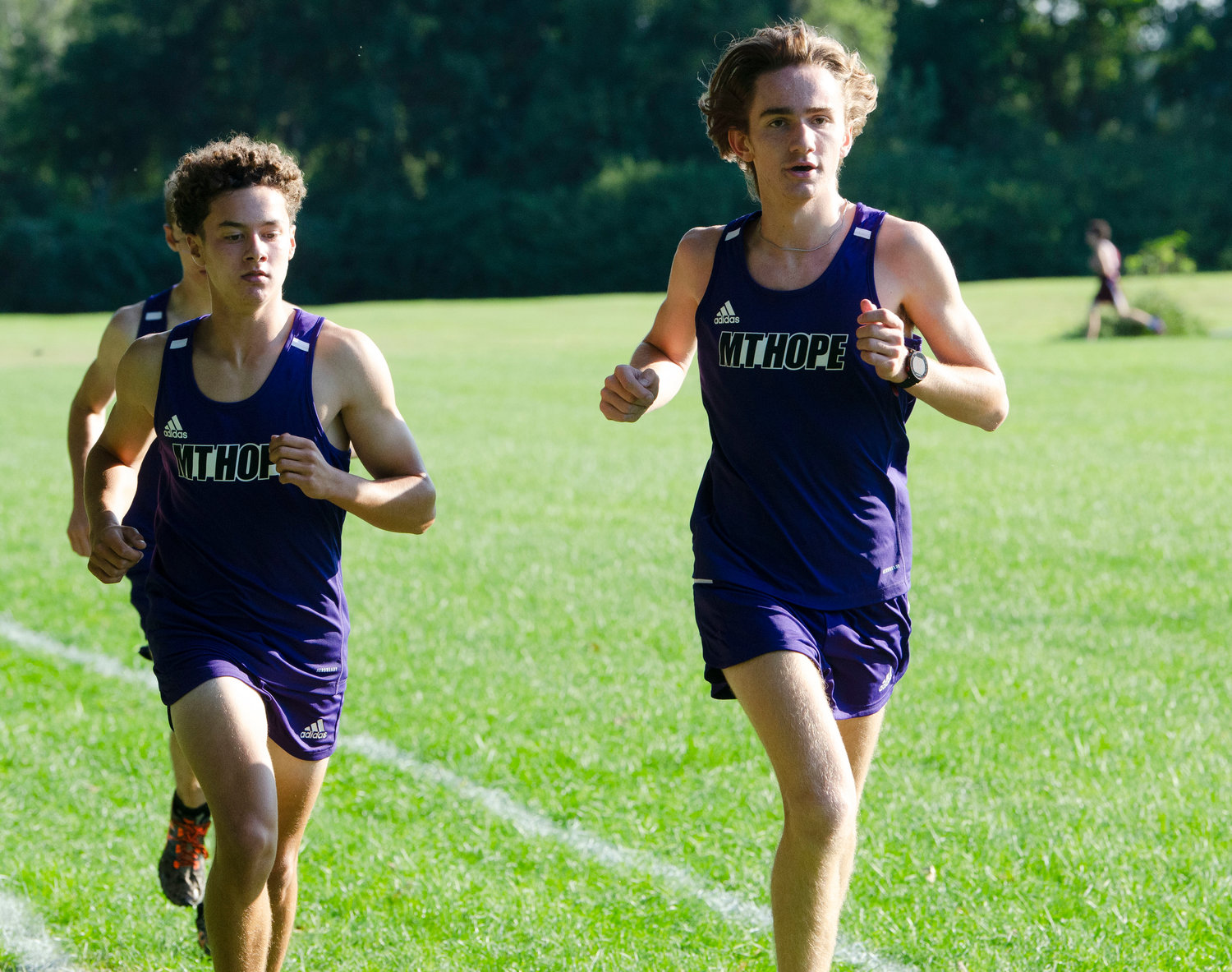 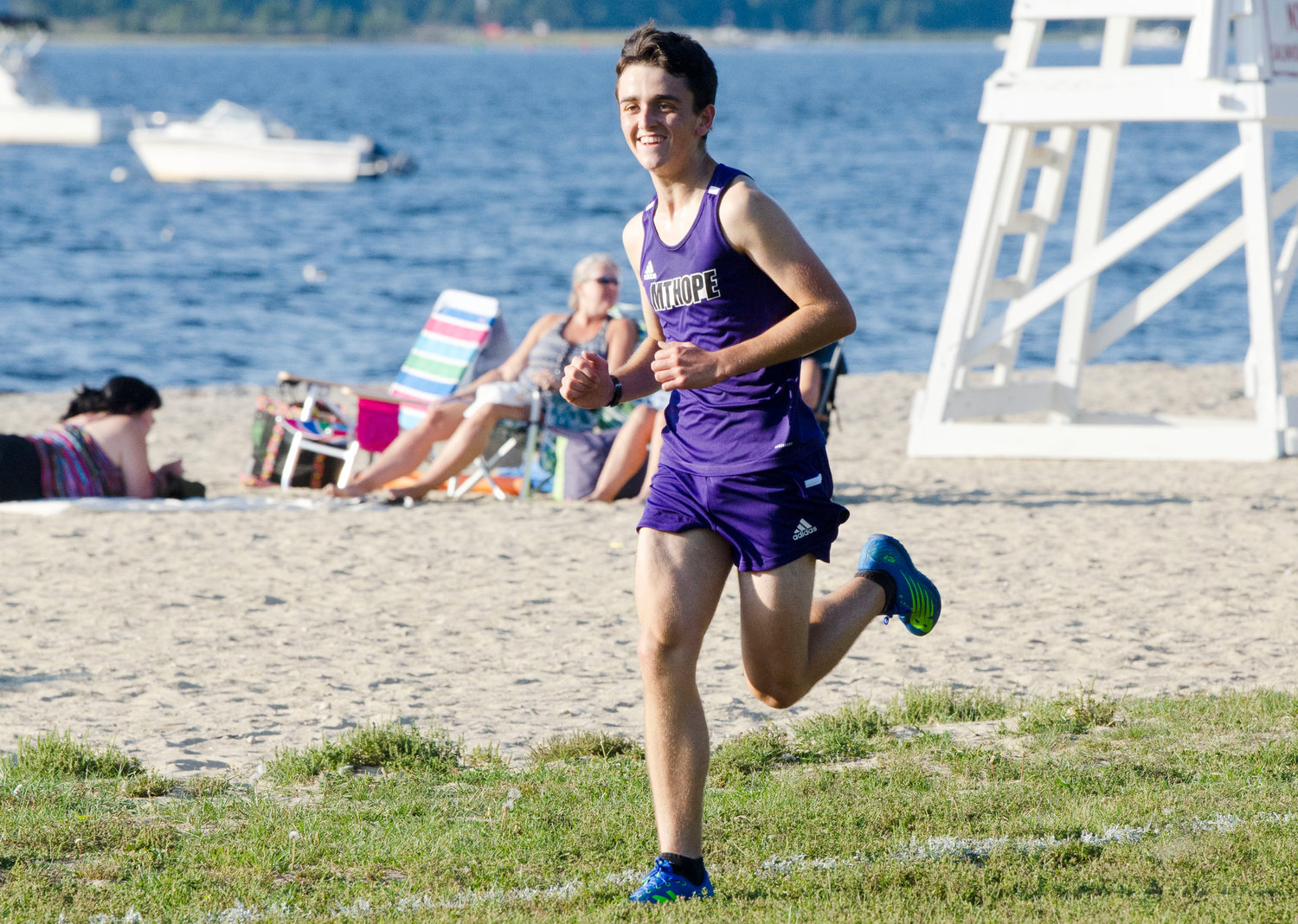 The Mt. Hope boys cross country team beat East Providence and Tiverton in a home dual meet at the Bristol Town Beach on Monday, to start the season off at 2-0.  The Huskies took the first six places as they worked their way through a field, by the tennis courts and down along by the sun bathers at the beach, twice, through the 3.1 mile course. Huskies senior Sam Merriam placed first with a time of 18 minutes and 40 seconds.

“We have a strong team,” said Merriam the team captain. “Looking at how these other teams did in the injury fund meet, we knew that we’d have to go out pretty quick.”

Merriam has been running for the high school the last four years. He began running at Kickemuit Middle School. “I wasn’t very good,”  He said. “We have good coaching at the high school. I’ve gotten a lot better. Today was a good example of that.”

“He’s the hardest worker in the room,” said Huskies head coach Neale Ross, who took over for Dennis Welch this season.  Mr. Ross last coached the team in 2010. Sam’s been a great leader. He has a goal to break 17 minutes this season. If he can do that, he’s going to go far.”

“I got a really hard working group of guys,” said Coach Ross. “They want to be here every day. Work at every practice, giving their best. I feel really fortunate to be working with such a dedicated group.”

Mr. Ross started teaching social studies at the high school two years ago and coaches track in the spring. “This is my sport. It’s what I love to coach. It’s nice to be back.”

During the same meet, the Mt. Hope girls cross country team beat the Lincoln School and East Providence, but lost to Bay View Academy in a tri-meet, to start their season at, 2-1. The lady Huskies were not as efficient as the boys. Junior Reyn Ferris led the Huskies to the finish line placing seventh, with a time of 24 minutes and six seconds.

“I am expecting a lot from Reyn Ferris and Sonia Bradley this year. They will take the lead, in the one and two spots, on our team,” said Huskies head coach Sue Rancourt. “Reyn has nice long legs, she’s got great form. She can really stretch it out when she wants to. We are expecting a lot out of Reyn to take our number one spot and be the leader on the team as far as the pace setter.”

“We have a lot of experience on the team and some dedicated runners,” said Coach Rancourt. “Our goal is to run as a group this year, to score points and focus on the team aspect of it. It should be a good year for us to work together as a team.”