The Mt. Hope Basketball team won their first game of the preseason, 66-24, over Brooke High School at the Tiverton Holiday Tournament on Thursday night. 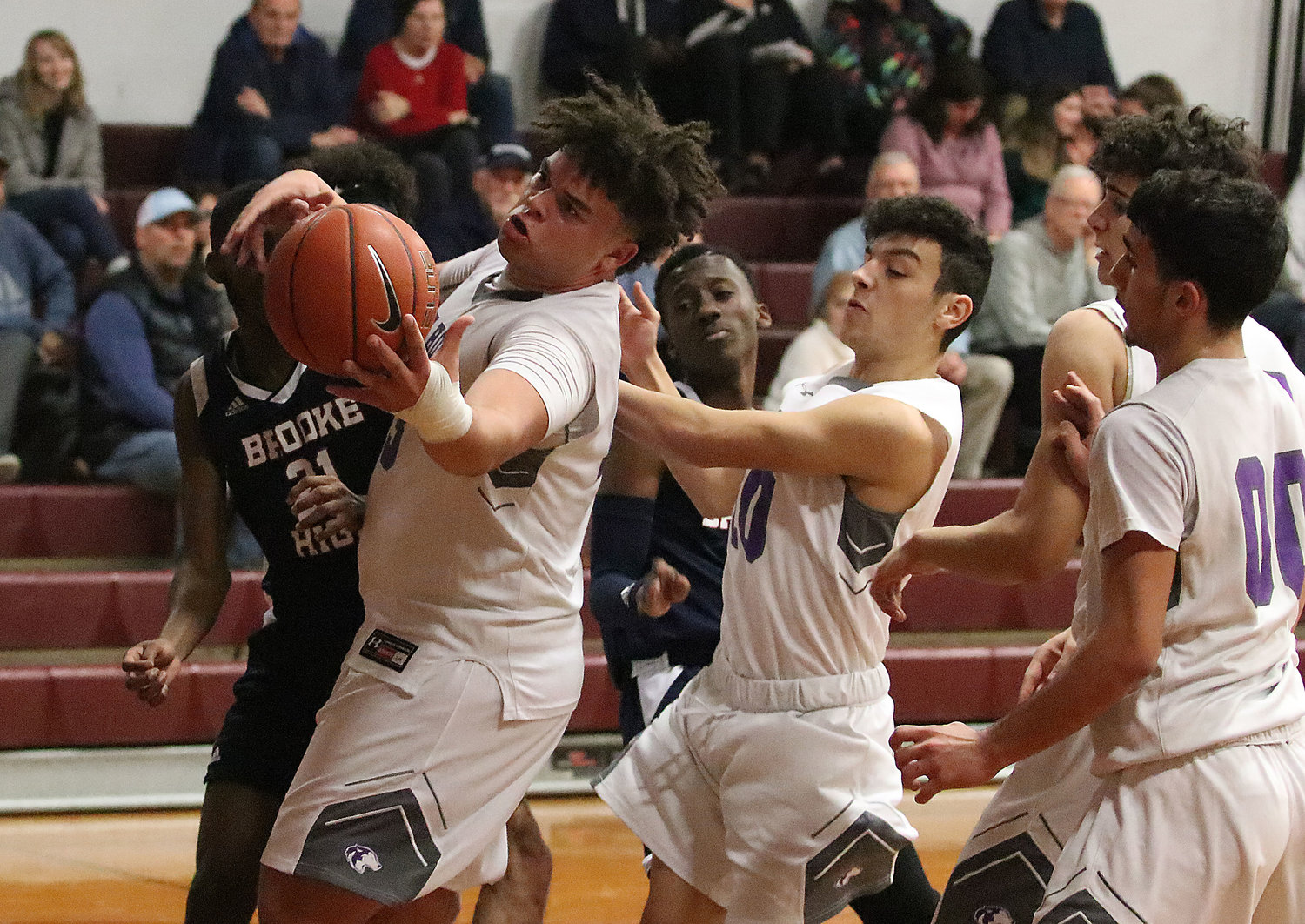 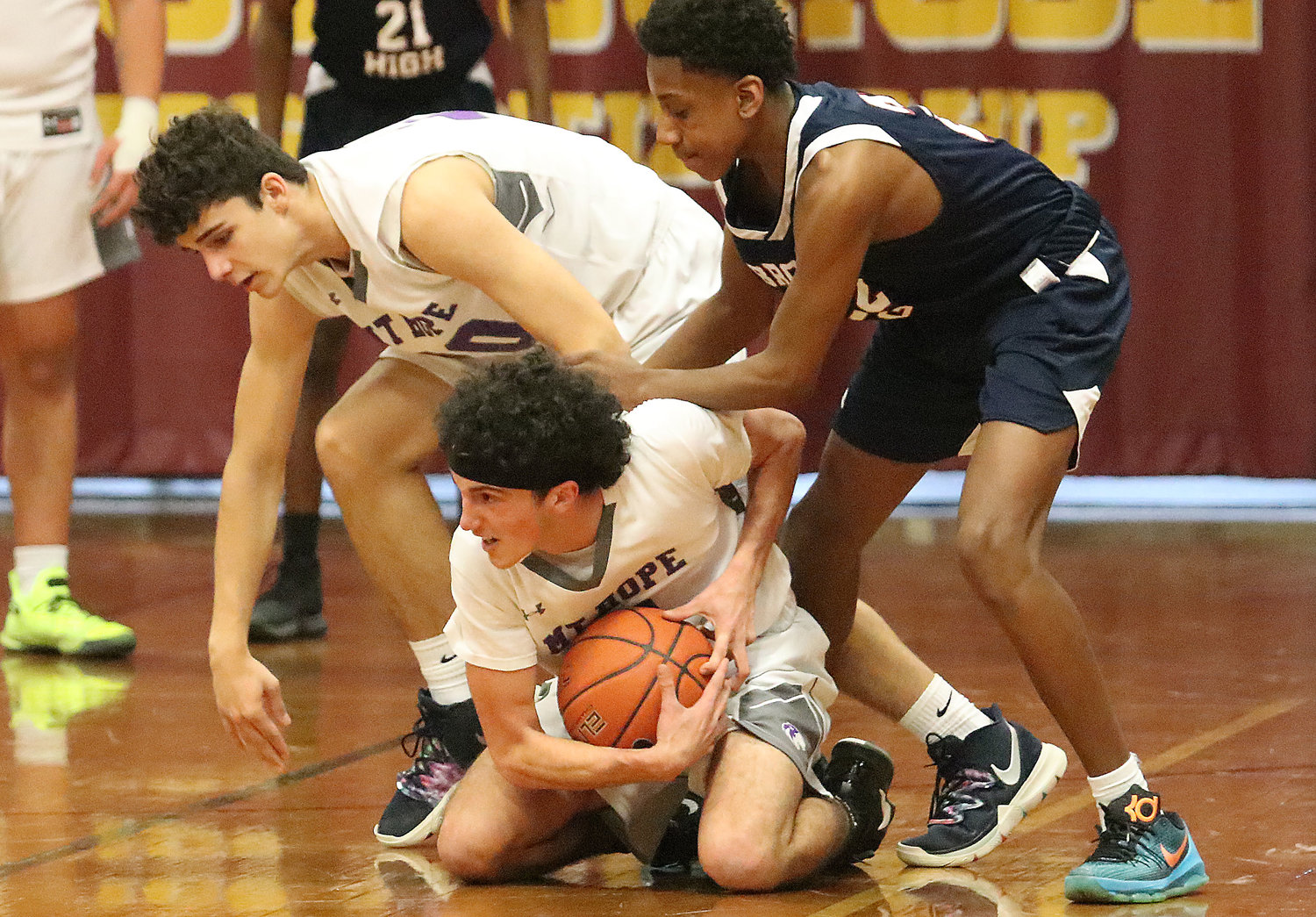 Brady Thibaudeau (left) catches himself from falling onto teammate Nuno Ponte-Amaral (center) as he collects a loose ball. 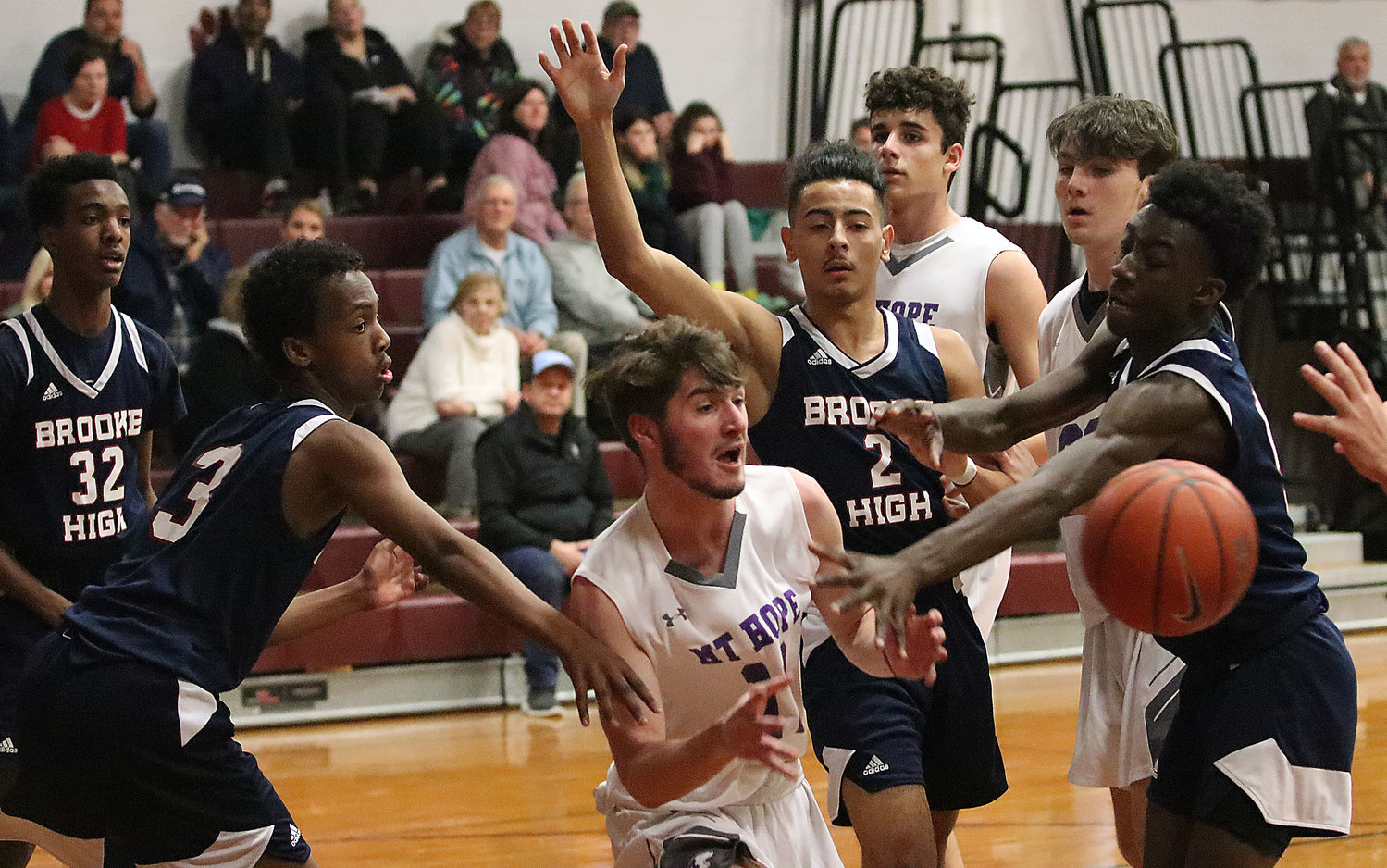 Robert DaCosta (center) readies to catch a pass while surrounded by a host of Brooke High players. 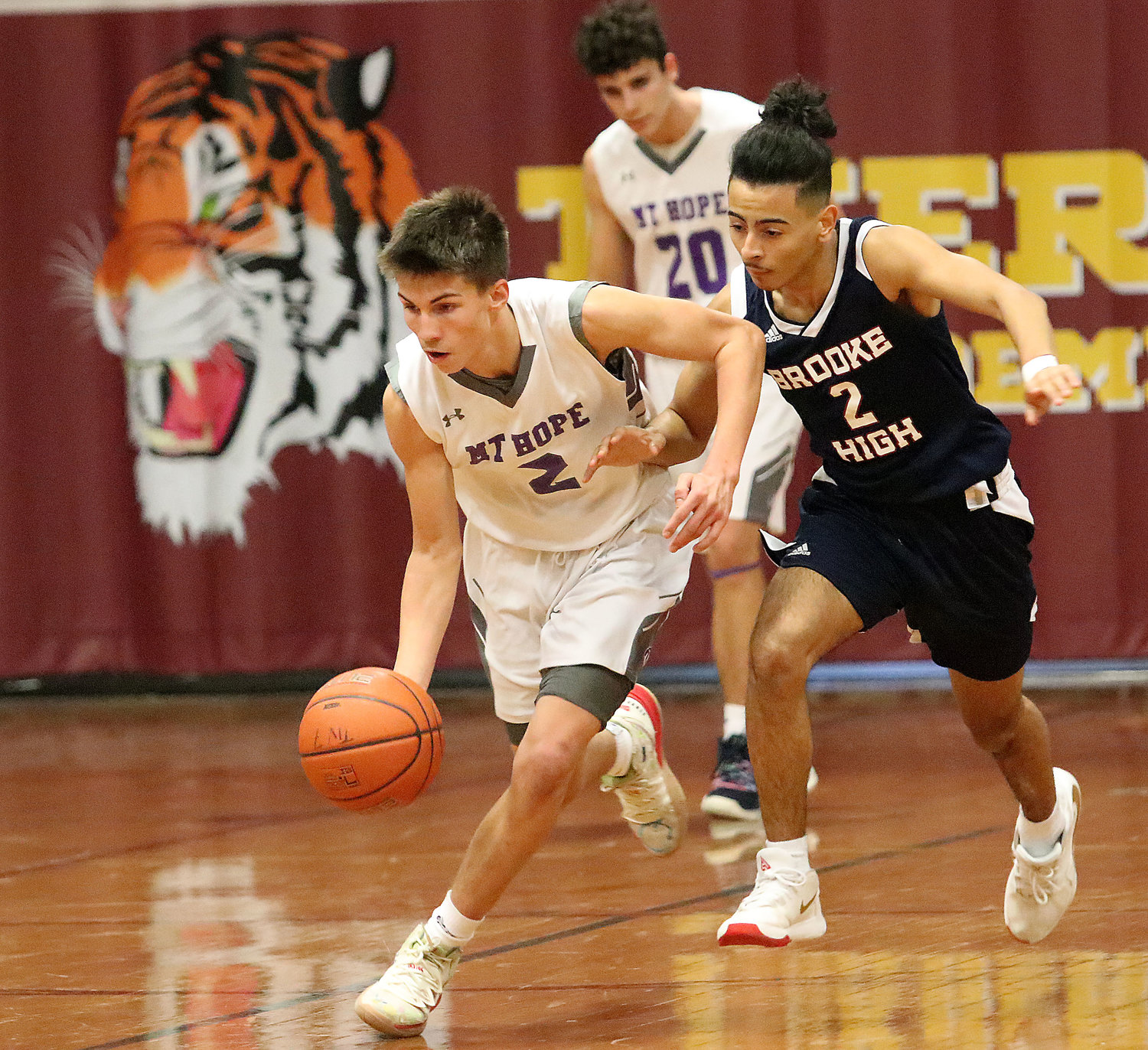 Guard Mason Almeida (center) dribbles up court after receiving a pass from Brady Thibaudeau (back). Head coach Jeff Grifka instructs the team during a time out. 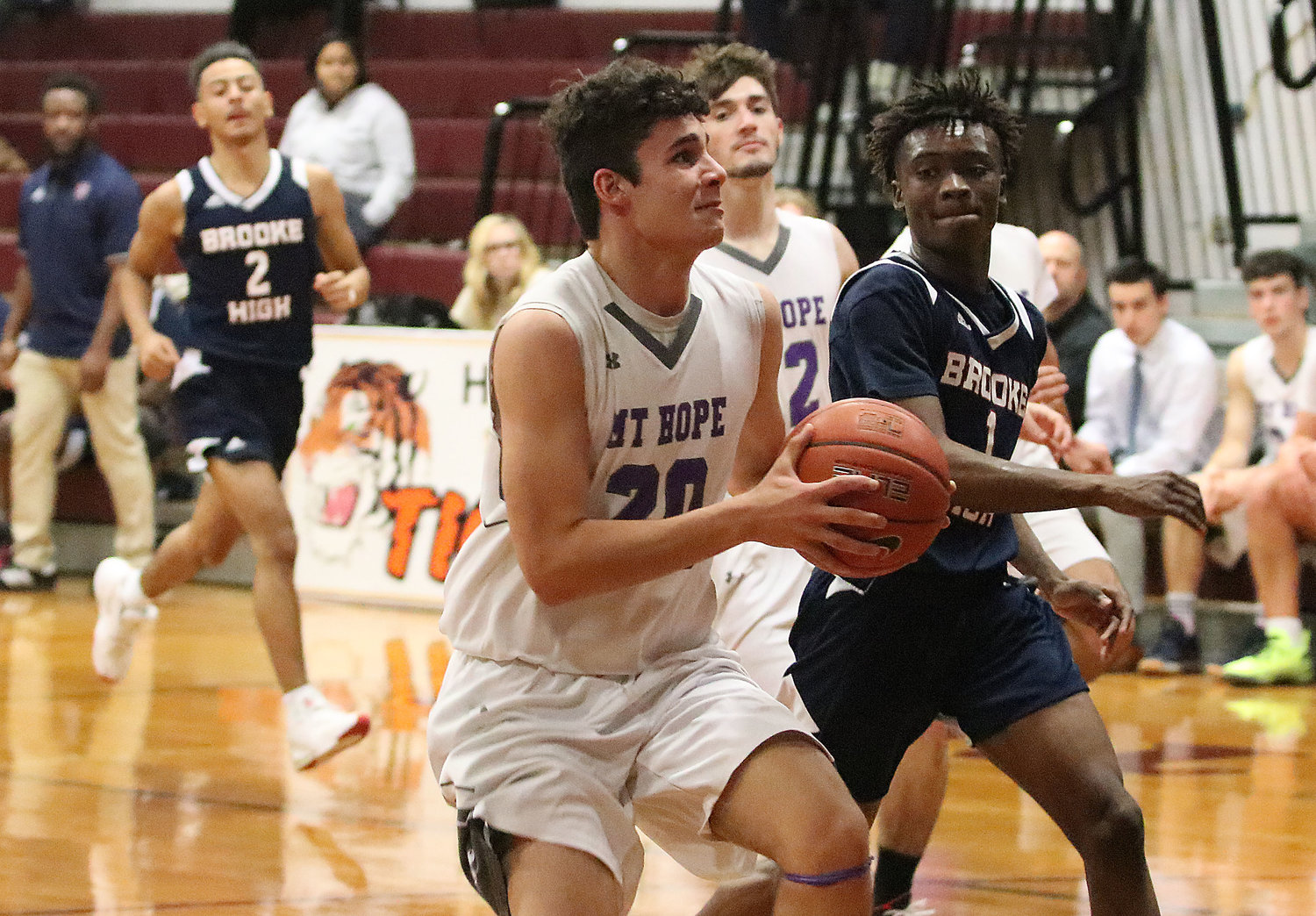 Brady Thibaudeau takes the ball to the hoop on a fast break. 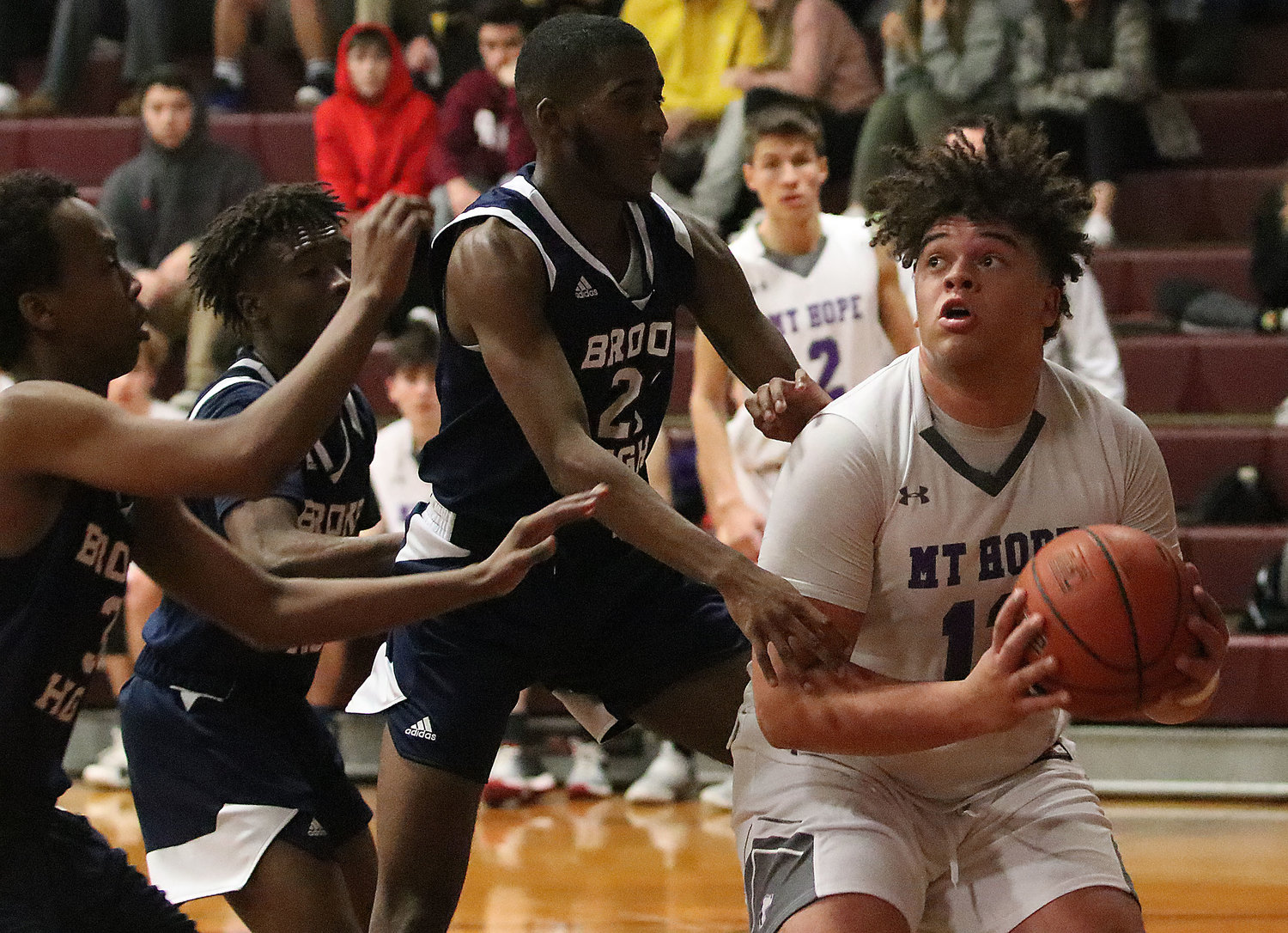 Power forward Jalen Kopecky fakes a pass while heading to the basket for a lay up. Point guard Xavier Costa looks to drive to the basket with Brooke High players in tow. 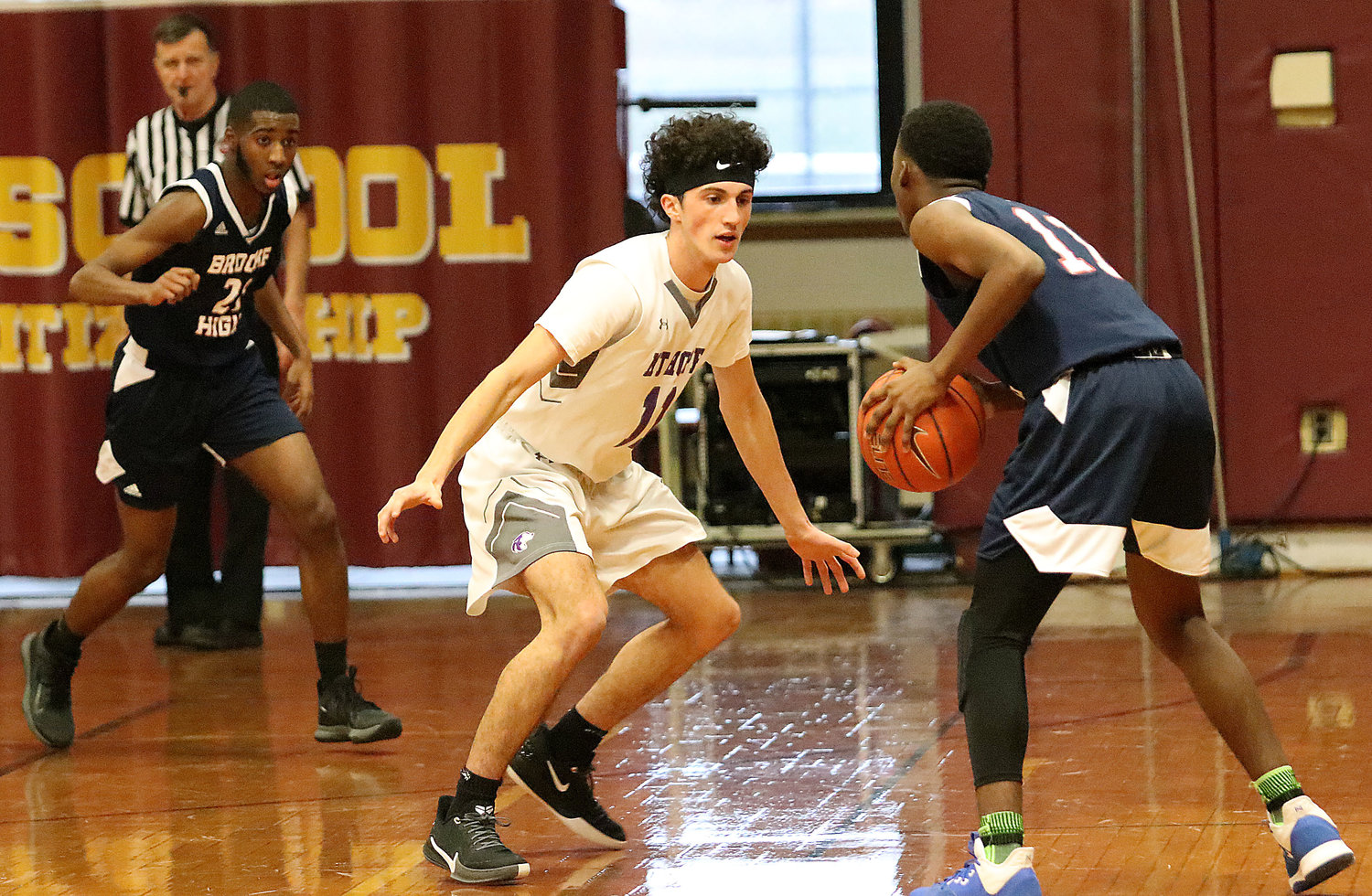 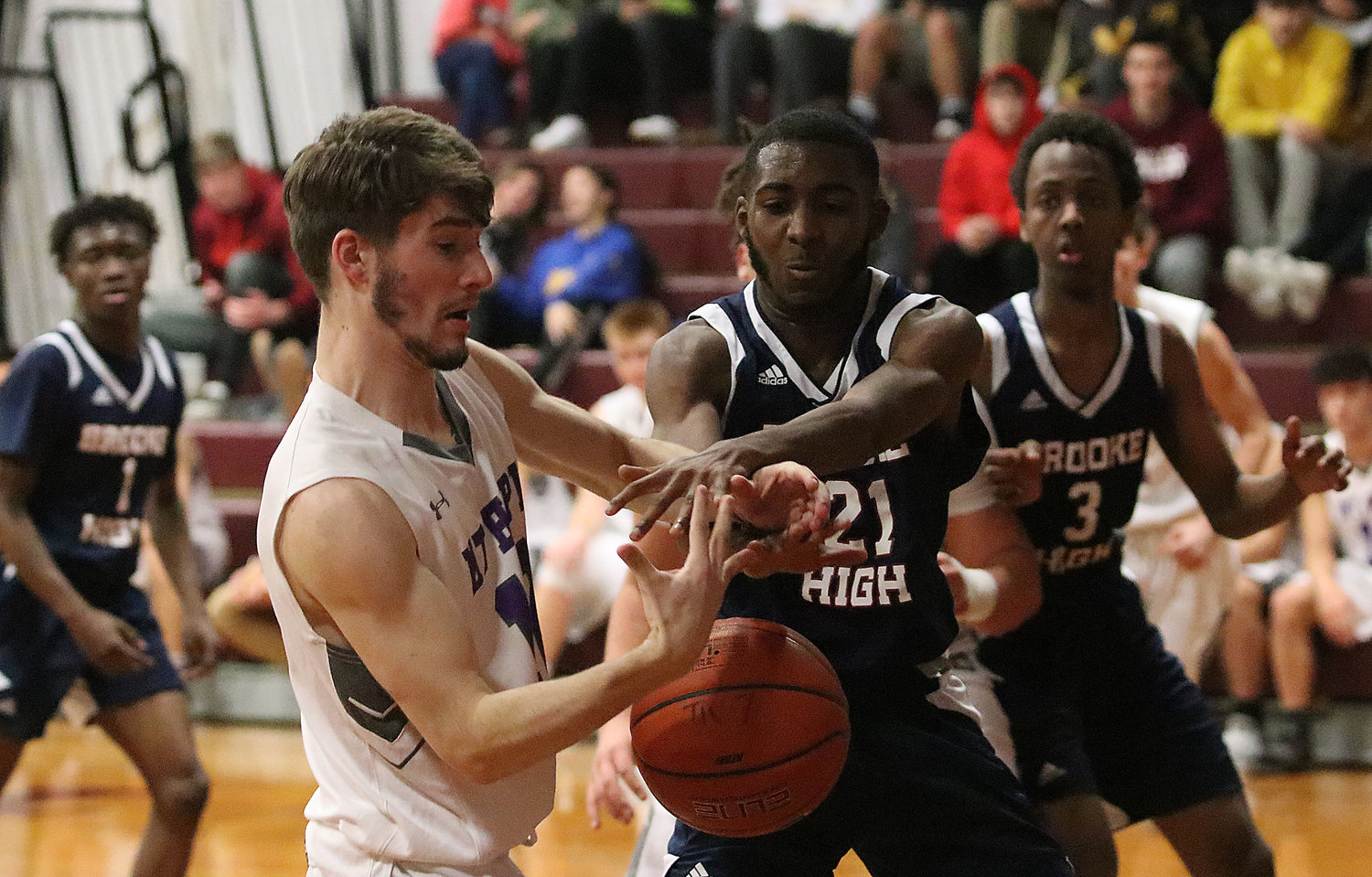 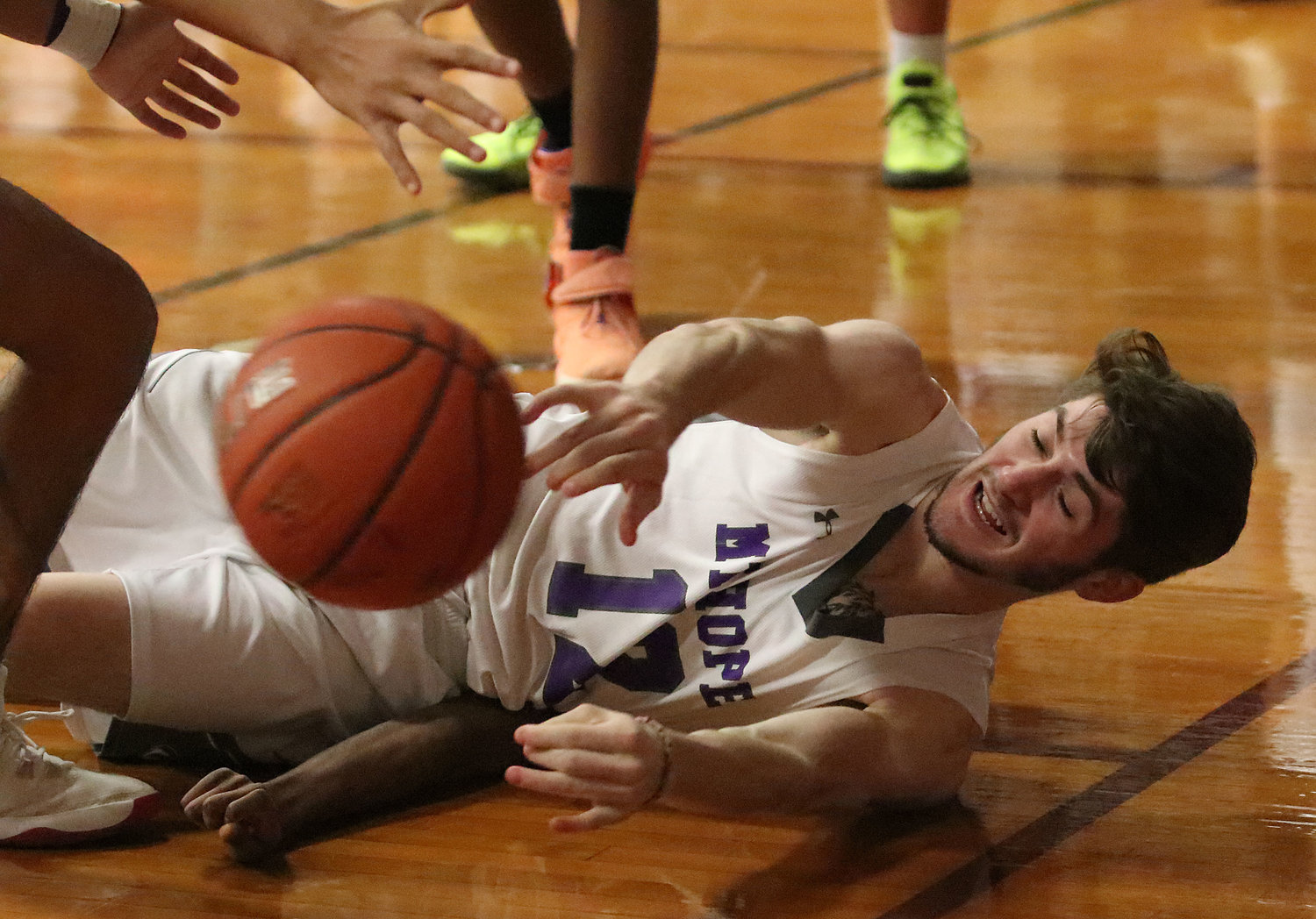 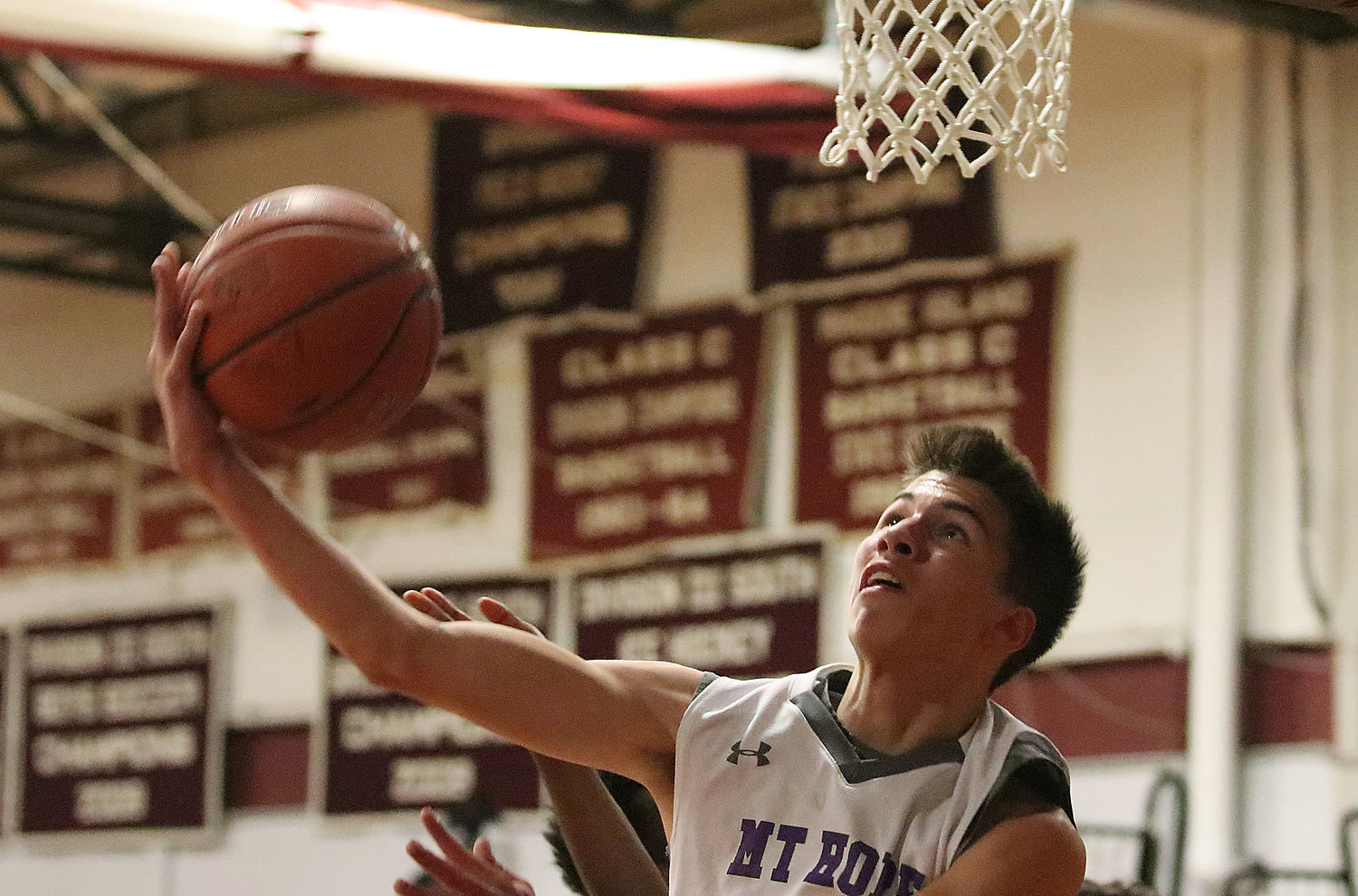 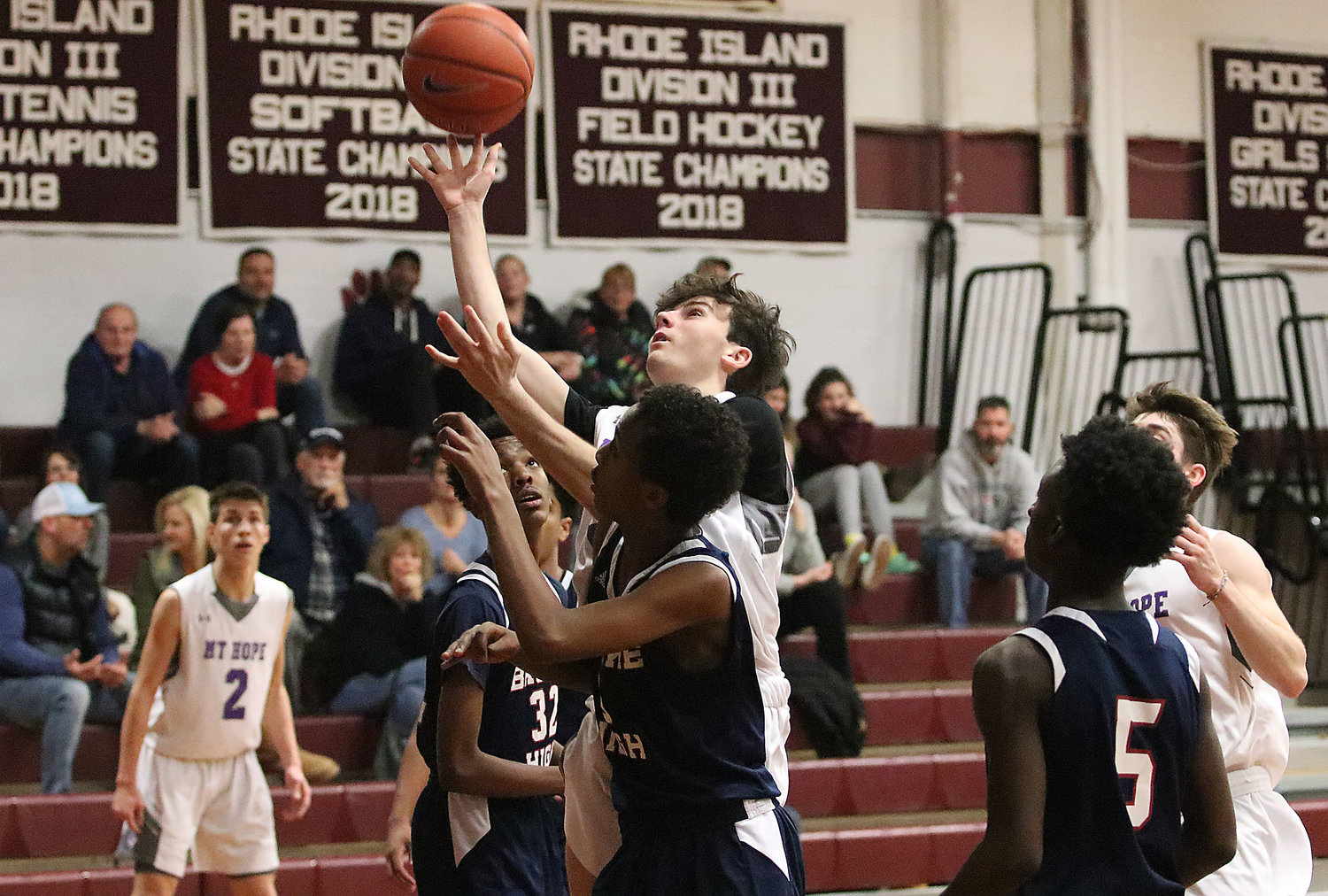 TIVERTON—The Mt. Hope Basketball team won their first game of the preseason, 66-24, over Brooke High School at the Tiverton Holiday Tournament on Thursday night. Power forwards Jaden Siembab (18 points) and Jalen Kopecky (17 points) led the way for the Huskies. Mt. Hope went 1-2 in the preseason, losing to Somerset and Barrington. They play their first league game against Scituate on Friday, January, 1, at 6:45 p.m.

“When we work the ball inside, good things happen. It’s what we did all last year,” said Siembab, a senior captain for the Huskies.

The smaller, thinner Brooke team was no match for the strength and size of the Huskies under the basket.

“We got the same guys coming back and we want the same outcome as last year,” Siembab said.

“The team is working hard and playing hard. Working off some of that holiday food,” said Head Coach Jeff Grifka rubbing his belly.

“Brady works so hard in practice. He has the ability to shoot the three from the outside and play and bang around down low,” said coach Grifka. “He’s been my first or second person off the bench. He’s very versatile. He can play a few positions and it’s quite an asset to have someone like that,” coach Grifka said.

Almeida is a quick and athletic guard that can play the point or two guard.

“Mason is very versatile,” said coach Grifka. “And Nuno, a soccer player, is a hustler. He’s one of those kids who sets the tone. And he’s very vocal, which I like.”

Coach Grifka had the Huskies working the press defense against Brooke High.

“We’ve been working on that. We used it last year to try to slow them down a little bit. Make our opponents make decisions when they only have a certain amount of time. Hopefully we can control the game a little bit more,” said coach Grifka. “We are building and moving forward.”