News and notes from around the city on November 8

EAST PROVIDENCE — Governor Dan McKee, so often a visitor to the city over the past year for various events and ceremonies, made yet another trip to East Providence around lunchtime on Election …

News and notes from around the city on November 8 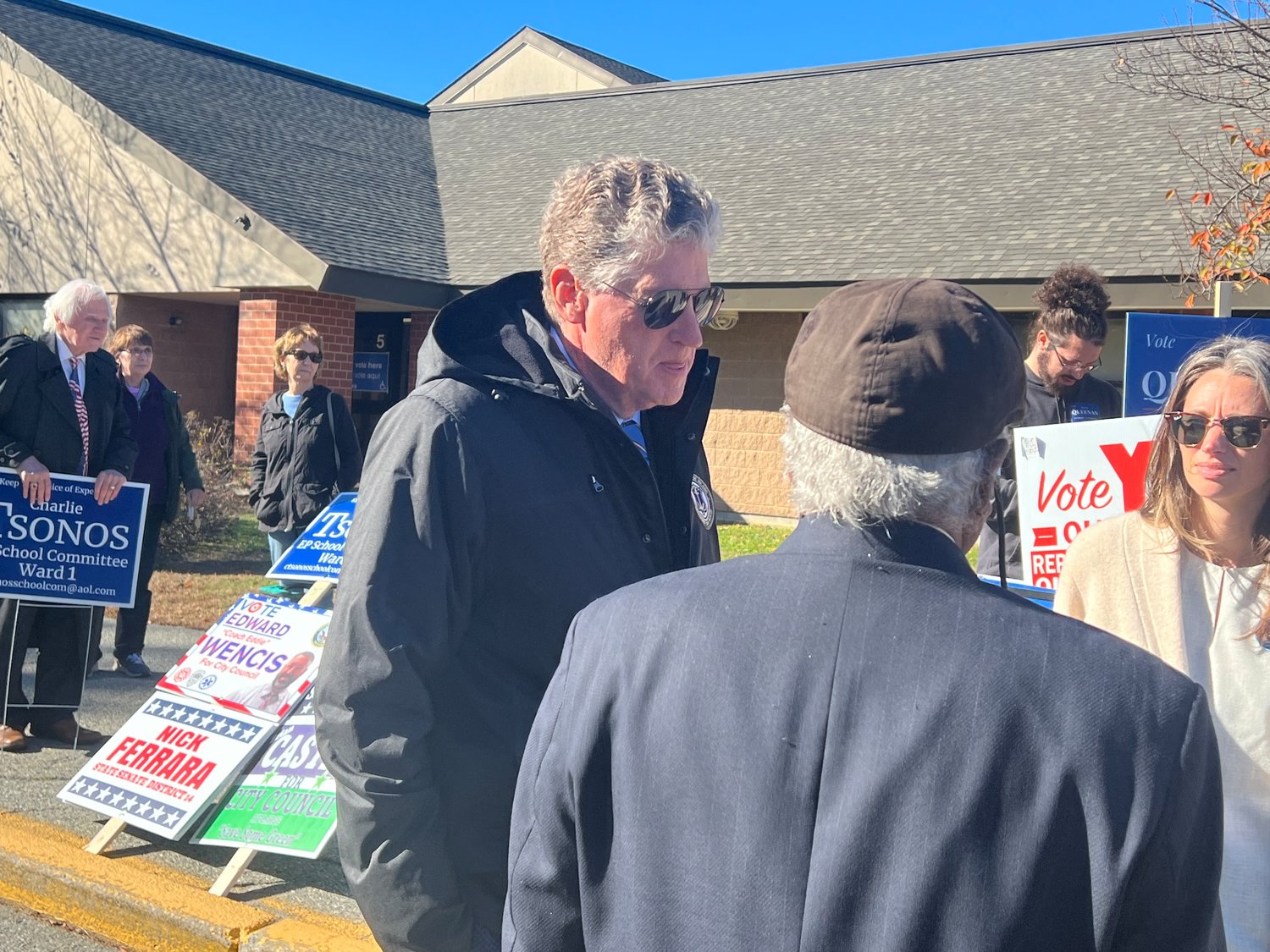 During his stop in city around noontime on election day, Governor Dan McKee chats with noted city resident Dr. Isadore Ramos at the Francis Elementary Ward 1 polling place in Rumford. 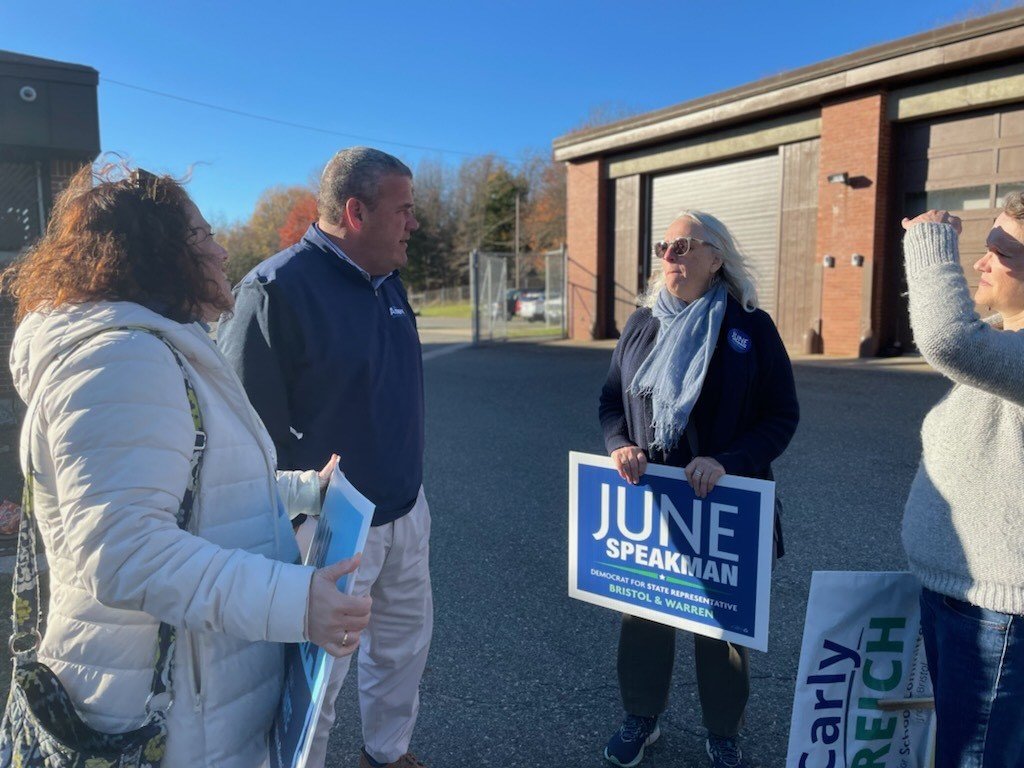 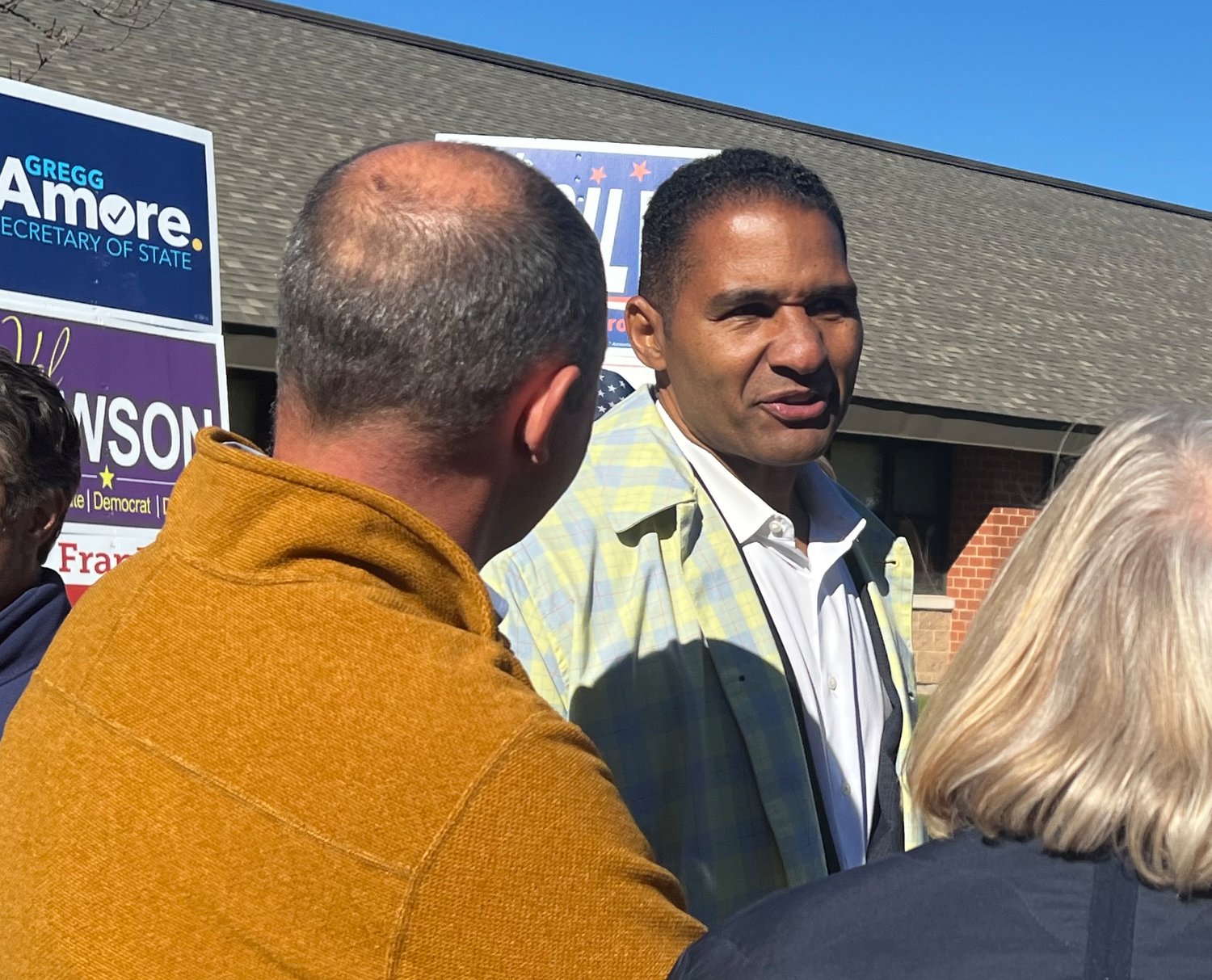 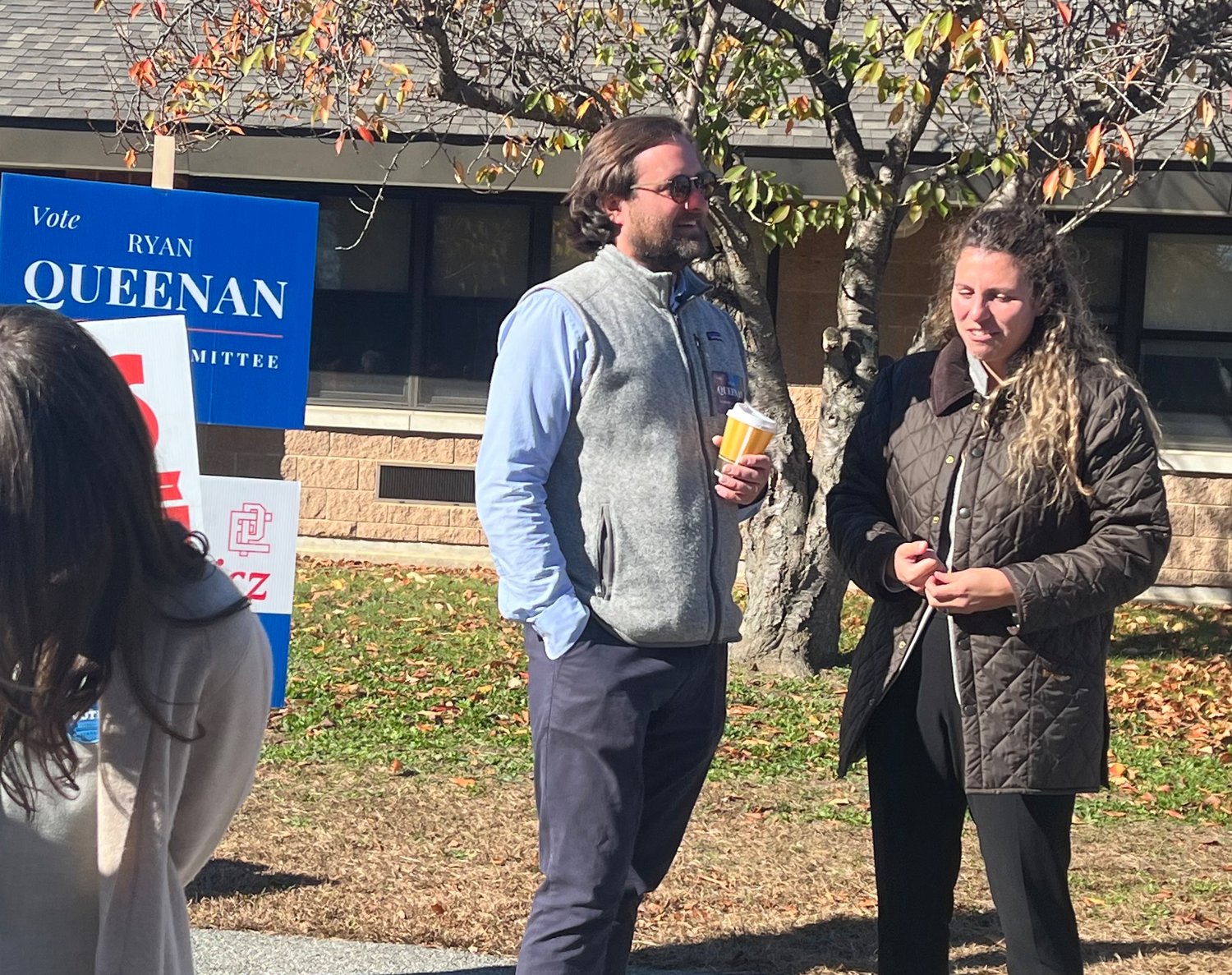 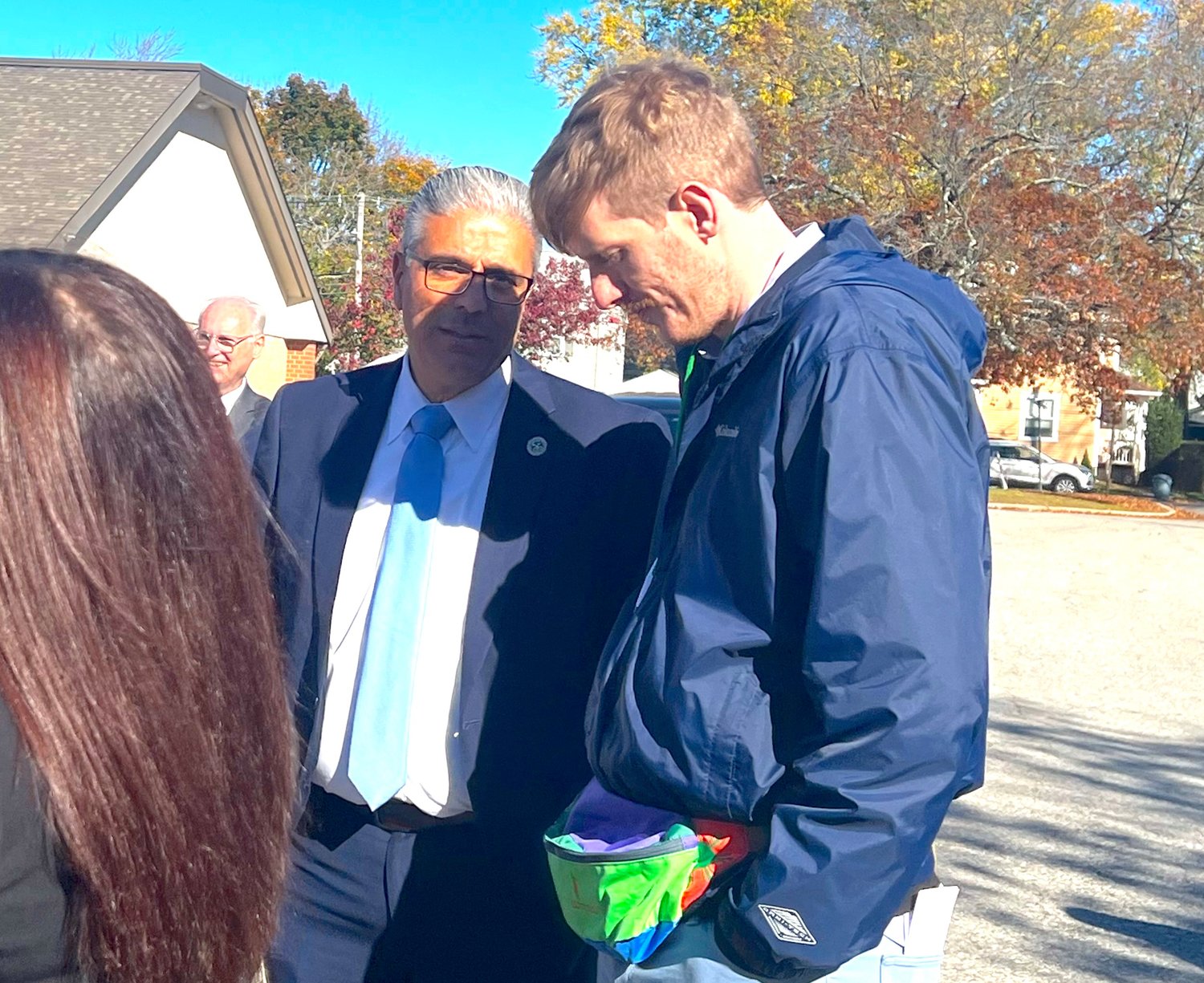 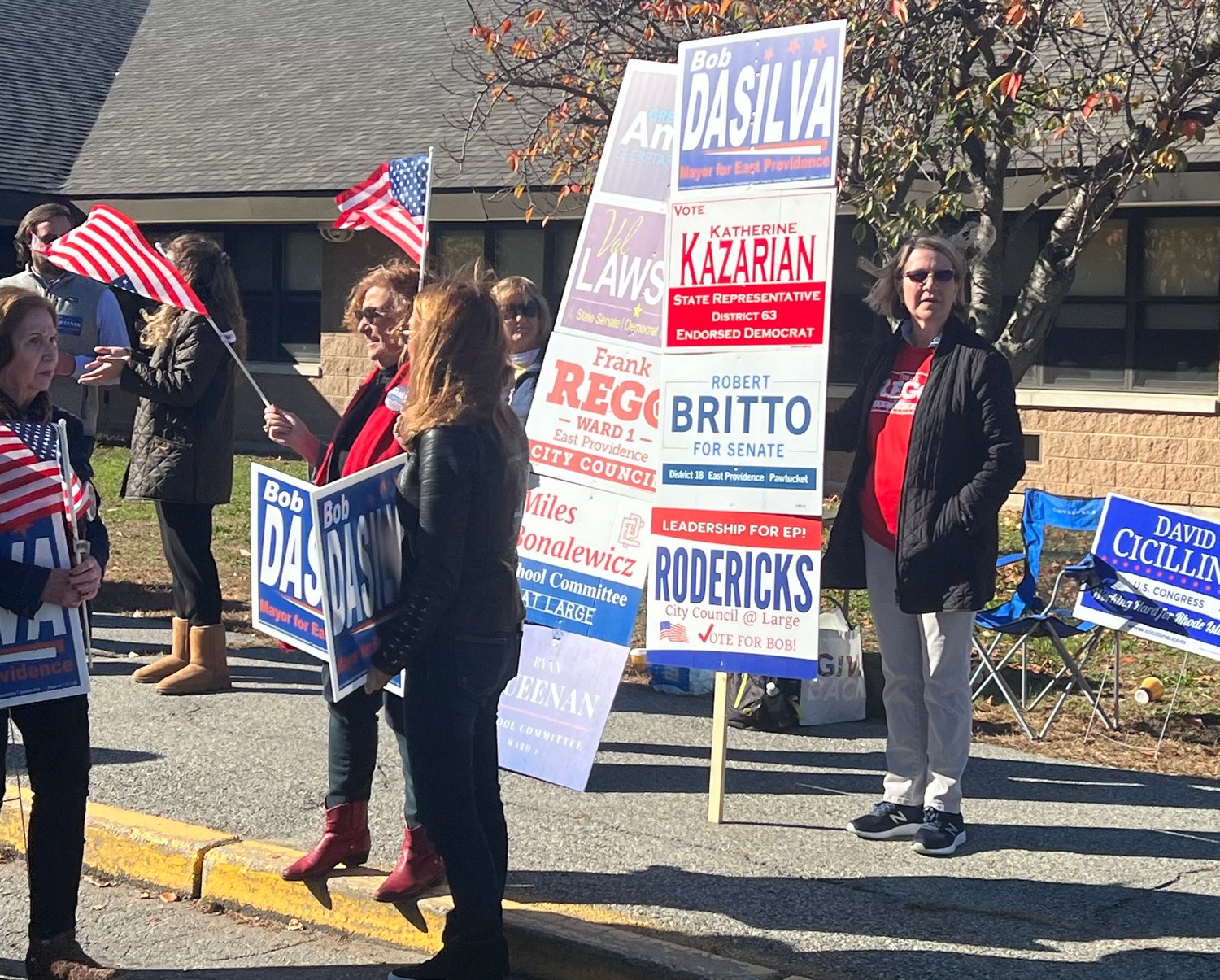 Supporters at the Francis polling place. 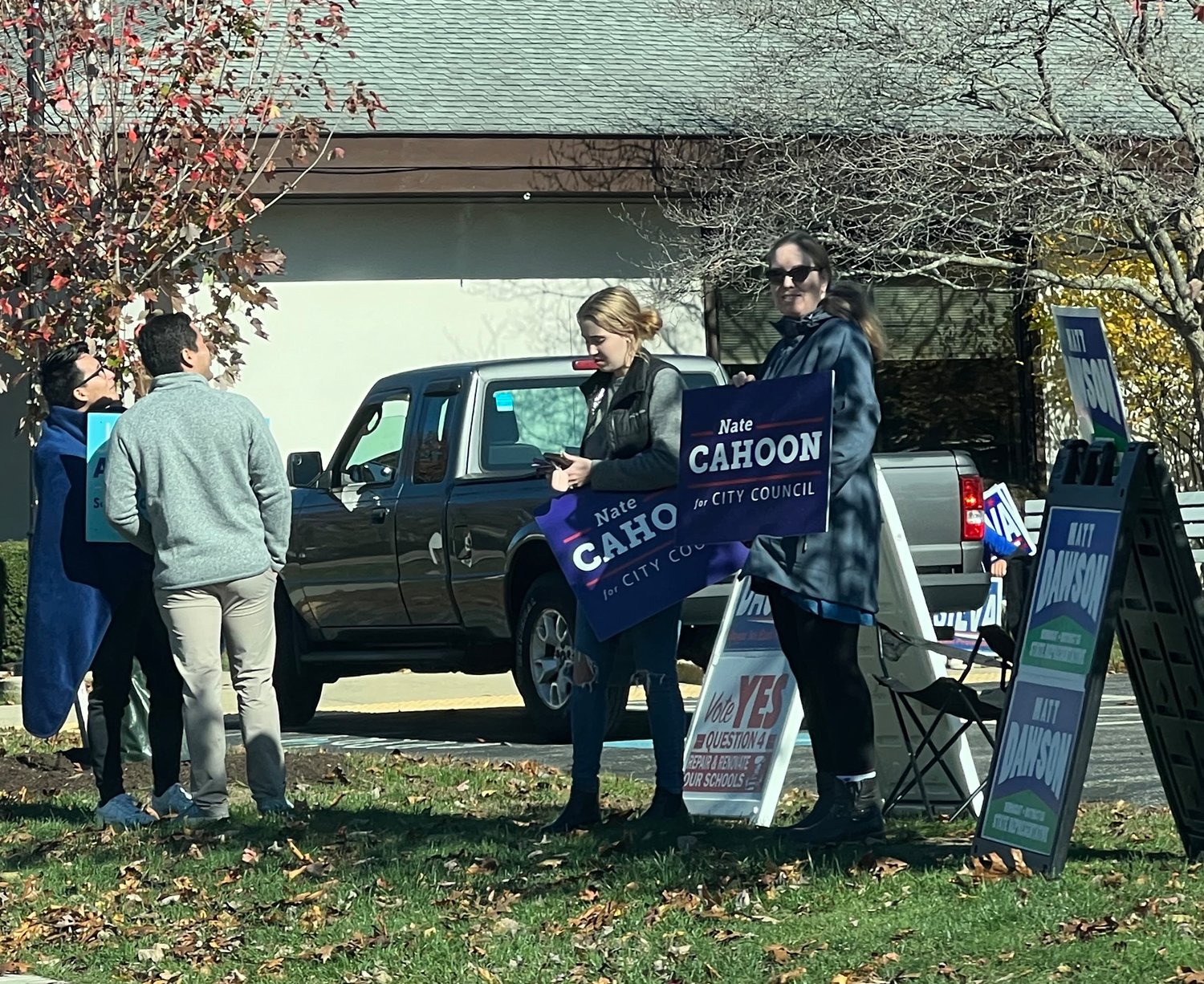 EAST PROVIDENCE — Governor Dan McKee, so often a visitor to the city over the past year for various events and ceremonies, made yet another trip to East Providence around lunchtime on Election Day, November 8.

McKee, seeking a full four-year team after ascending to the governorship following Gina Raimondo’s appointment to the Biden Administration some 16 months ago, spent some time shaking hands with potential voters at the Myron Francis Elementary School polling station in the Rumford section of the city.

The incumbent Democrat, elected to serve as lieutenant governor at the 2014 election, began his final day on the trail casting his vote at the Community School in his hometown of Cumberland. He made his way down the Blackstone Valley to East Providence before skipping over to Cranston and points south before returning to the Providence area later in the evening.

Amore’s day
East Providence native and former State Representative for the city Gregg Amore began his last day in pursuit of the Secretary of State position in East Greenwich.

The Democrat, Kent Heights resident and five-term rep from District 65 was scheduled to travel throughout South County before making his way back north.

He’ll join the state-wide candidates on the Democratic ticket at the Graduate Hotel at the Biltmore in Providence to watch the results.

Polling places
A visit to polling stations in each of the city’s four wards before, during and after the noon hour saw a significant amount of traffic each.

McKee found a full lobby of Ward 1 voters at Francis Elementary. A similarly packed Martin Middle School had voters streaming in and out of the Ward 2 station.

The nearby Ward 3 places at the Fuller Learning Center on Dover Avenue and Kent Heights Elementary off Pawtucket Avenue were both bustling.

In Ward 4 just past the lunchtime hour there were plenty of voters at both the Riverside Congregational Church and Riverside Branch Library on Bullocks Point Avenue. Only at Waddington Elementary on the inland of “The Riverside” was there a slightly lesser amount of foot traffic.

More election notes
Prior to Election Day 2022 on Tuesday, Nov. 8, and as it has in recent years, the Rhode Island Board of

Elections issued a released with aim of better informing residents about the vote tallying and public results reporting process.

The notice included a timeline of the submission and tabulation of ballots as well as a count of ballots cast during early and mail-in voting.

The time line for voting and counting is as follows:

Early Voting: These results will be transmitted by local Boards of Canvassers on Election Night and were available on the Board of Elections’ website beginning at 8 p.m.

Mail Ballots: While the Board expects to count most mail ballots by November 8, ballots placed in authorized drop boxes at City/Town Halls or in polling places must still be tabulated. These ballots are sealed in envelopes and held in secure and sealed containers by the local Board of Canvassers and delivered to the Board of Elections on November 9. Partial mail ballot results will be available on the Board of Elections’ website after 8 p.m. but will not include these drop box ballots.

November 9-10: Remaining drop box ballots and any still uncounted mail ballots will be added to the Mail Ballots totals and made available on our website. Any precincts which failed to transmit their results on Election Night due to any technical issues will be added to the Election Day results and made available on the Board of Elections’ website.

November 11-12: Provisional ballots results will be added to Polling Place Results and will be made available on the Board of Elections’ website.

The Board of Elections has released the following updated numbers as of the close of business Monday, Nov. 7, on the number of mail and early voting ballots received, and the number of ballots that have been run through the Board’s high-speed optical scanners.

The totals were as follows:

Early voting ballots received: 70,818
Mail ballots scanned in as received: 30,903 (84% of ballots requested)
*20,958 ballots have been run through the Board of Elections’ high-speed optical scanners