Bristol's new fire boat is a floating hydrant, and an ER

Costing about $450,000 outfitted and delivered — with 75 percent of that paid for by a Federal Port Security grant — Bristol’s new fireboat is capable of doing things that the …

Bristol's new fire boat is a floating hydrant, and an ER 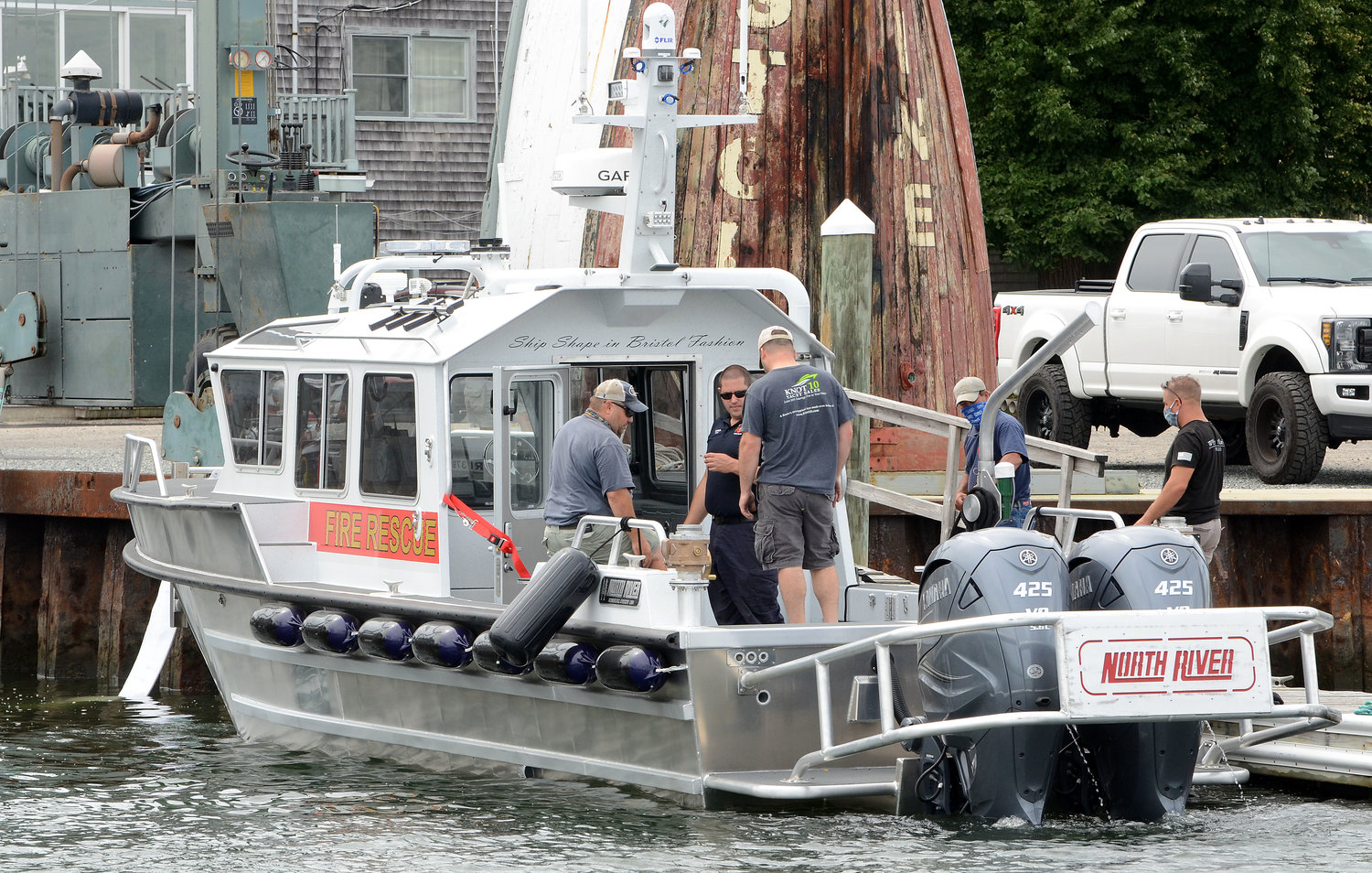 The new Bristol Fire Department boat launched last week from Bristol Marine. Above the wheelhouse is the phrase “Shipshape and Bristol fashion,” which was a popular turn of phrase in 19th- and 20th-century Bristol, but it did not originate here. The expression was first used in the town’s namesake, on the Avon River in southwest England, an important port for nearly 1,000 years. “Shipshape and Bristol fashion” was an expression reserved for especially stout, well-made and seaworthy vessels.
Photos by Richard W. Dionne Jr. 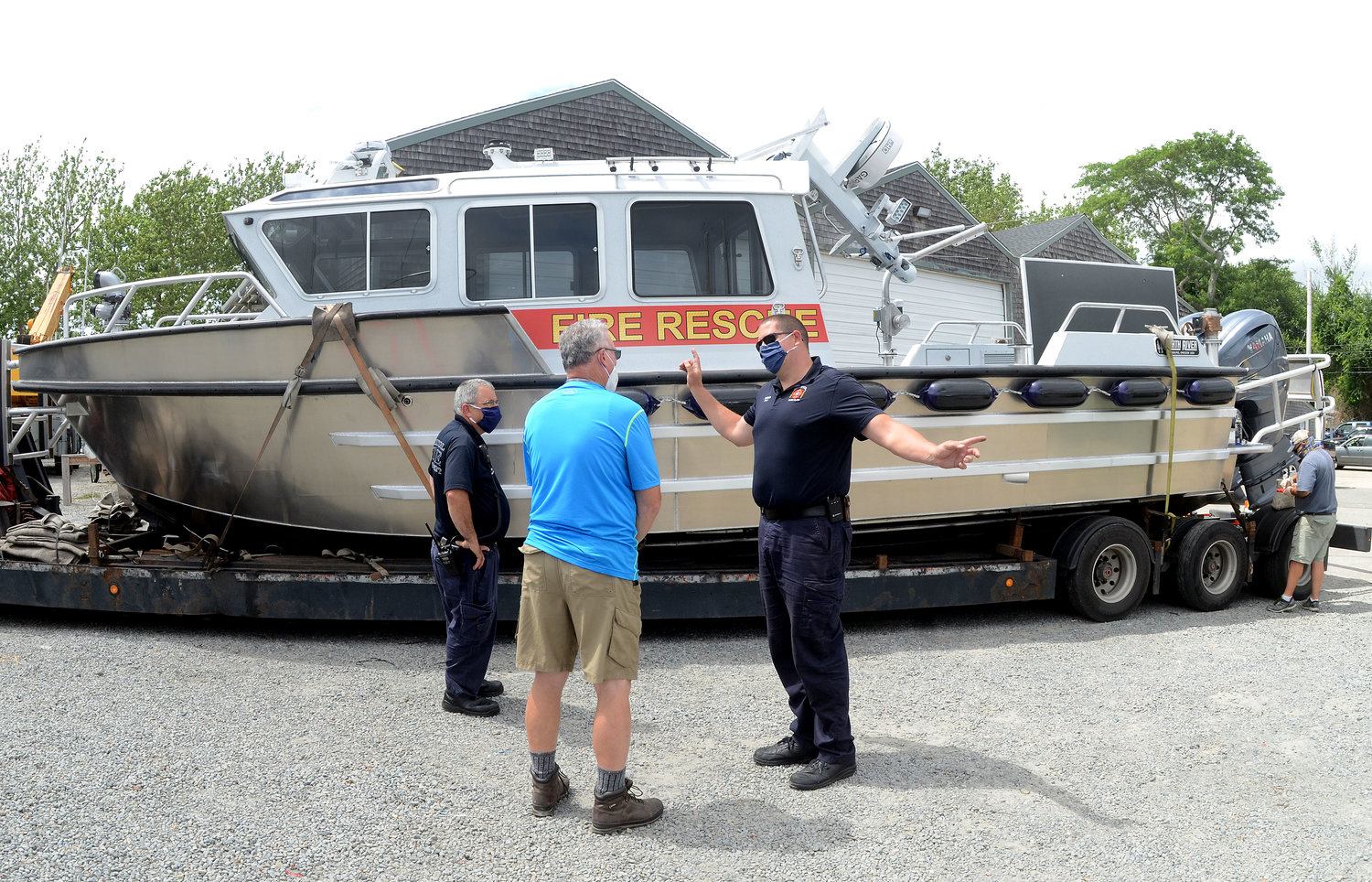 Bristol Fire Chief Michael DeMello talks about the new boat prior to its launching last week.
Previous Next
Posted Thursday, July 16, 2020 7:00 am
By Christy Nadalin

Costing about $450,000 outfitted and delivered — with 75 percent of that paid for by a Federal Port Security grant — Bristol’s new fireboat is capable of doing things that the town’s other boats (Fire, Harbormaster and Police) cannot.

“A few years ago we started to see an increase in both the number and complexity of marine emergency calls,” said Bristol Fire Chief Michael DeMello. “The harbor has become increasingly busy over the last several years.”

The department was already equipped with a boat, but with no firefighting capabilities and no real space to carry equipment or treat the injured, its usefulness was limited. This new vessel is 32 feet in length (it looks longer due to the two 425-hp outboard motors), and has enough space to treat up to four injured people.

It is also equipped with a pumping system that can draw water from the bay to either fight fire directly from the boat or to serve as a backup hydrant, delivering water to land-based fire apparatus responding to waterfront property — especially in locations where water pressure might be diminished.

“It would never run dry. It has an unlimited source of water,” said Chief DeMello. The bottom of the vessel is a heavy-duty metal plate that allows the boat to be beached if necessary — though that is not an option the Chief is hoping to have to use.

Its powerful outboards will allow the boat to travel at speeds of up to 43 knots empty, though speed would be diminished once it’s loaded with equipment for a call. The outboards are also needed to counter the backward thrust that would be generated by operating fire hoses from a floating vessel. Manufactured by North River Boats in Oregon, the boat was designed specifically for economic efficiency, a process that took six months of conversations between the Fire Department and the manufacturers. Everything down to the brand of motor was specified — Yamaha, because of the accessibility of reliable, local servicing here.

Chief DeMello is grateful for the support of Rhode Island’s federal delegation, as well as local officials. “Senators [Jack] Reed and [Sheldon] Whitehouse, and Representatives [David] Cicilline and [Jim] Langevin, worked hard throughout this process,” he said. “And we had great support from Town Administrator Steve Contente and the council.”

The vessel is built to last — an important feature for a boat that will be on the water year-round — and though Chief DeMello expects it will require upgrades to its onboard technology over the years, its hull structure should last for decades.

“Hopefully I will be long retired and this boat will still be going strong,” he said.