It’s 45 years and counting for the folks who own and operate Bristol House of Pizza, a local restaurant in the center of Bristol’s downtown business district. 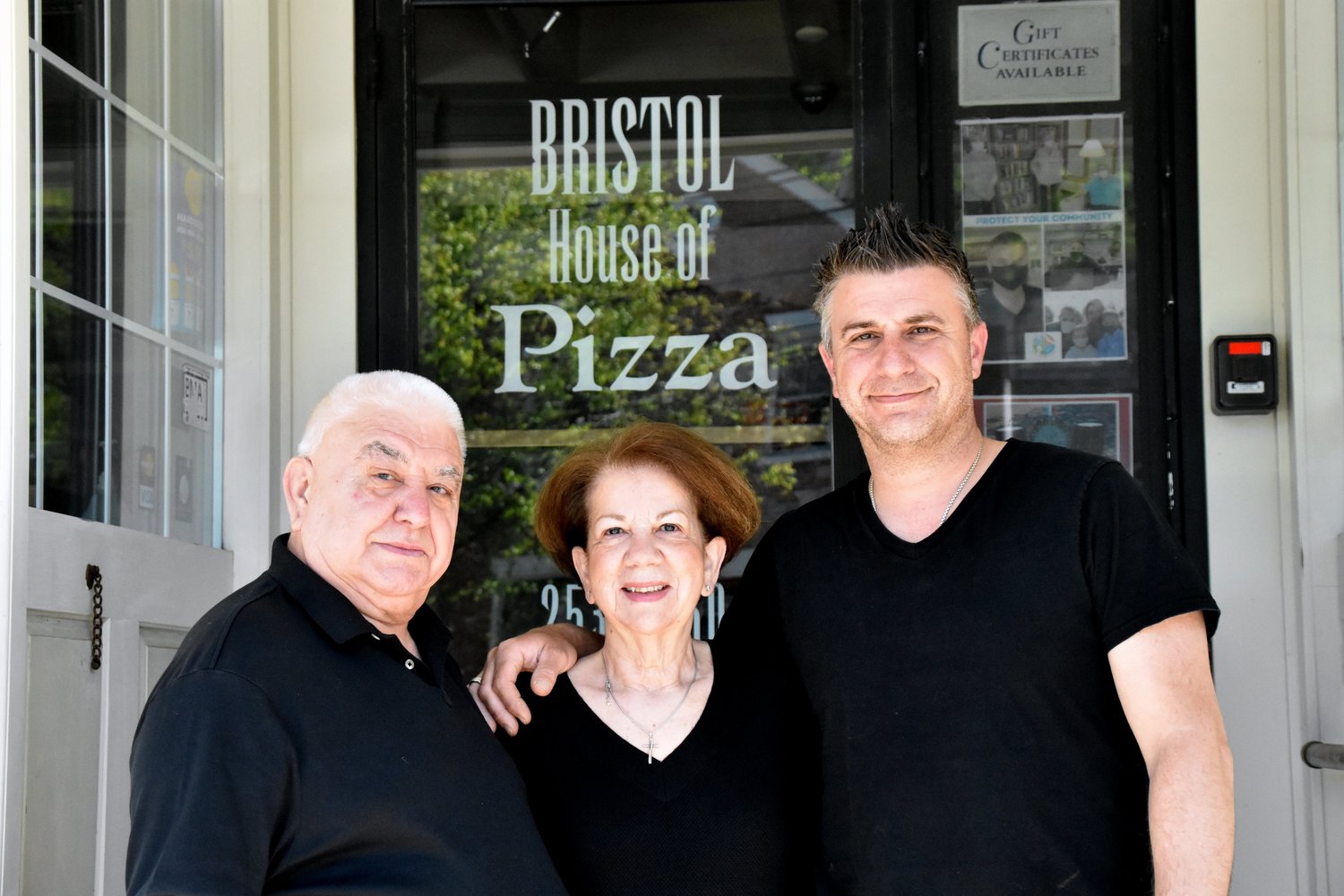 George, Tula and Greg Gatos celebrated Bristol House of Pizza's 45th anniversary recently. Together, they say it's been a great and most enjoyable experience interacting with the general public.
Manny Correira
Posted Thursday, May 19, 2022 12:30 pm
By Manny Correira

It’s 45 years and counting for the folks who own and operate Bristol House of Pizza, a local restaurant in the center of Bristol’s downtown business district. It doesn’t seem possible that four and half decades have slipped by since George and Tula Gatos first opened their business at 55 State St.

A lot has happened during that time span, but this proud Greek couple confesses that if you continue to serve good food at a reasonable price, folks will keep coming back. And that’s exactly what’s happened.
The official date BHOP opened was April 27, 1977, during a time when the economy was kicking into high gear and people were excited at the prospect of trying yet another new restaurant in town.

Aside from its trademark pizza, there’s a wide variety of food which has earned BHOP a place of excellence in the Bristol Community. Together with their youngest son, Greg Gatos (who serves as restaurant manager), and a dedicated support staff, BHOP continues to operate in its comfort zone.

“We’ve had a lot of great memories here,” noted Greg Gatos. “We hope to continue serving the public for many more years to come.”

One of the main highlights of BHOP’s impact on the community is the annual birthday party for one of its most beloved citizens and patrons, Genevieve Marszalek, who turned 108 years old this past February.
“We love Genevieve,” said Tula, “and she loves coming here as much as she can. She’s like family.”

People from all walks of life have ventured into this time-honored eatery, from local politicians and business leaders, to many others throughout the state and beyond. Included were members of a fire department from the Gatos’ homeland in Greece, who stopped by a few years ago to interact with George and Tula. You never know who’s going to step in the front door next.

Bristol House of Pizza is so well appreciated in the local community that the business received the annual Vickie Van Voast Memorial Award, one of the highest honors by the Bristol Fire Dept. Ladies Auxiliary in appreciation for the Gatos’ continued unselfish contributions to those in need.

“We were so surprised to get that award,” said Tula, who shared the joy that Firemen’s Sunday afternoon last year. “It was quite an honor for all of us.”

“The Gatos family has always been true supporters of The Bristol Fire Department, whether it’s attending events, donating gift cards, and feeding our firefighters after fires and trainings,” said BFD Ladies’ Auxiliary president Jennifer Mancieri. “They also always make sure I have enough gift cards on hand to be sure fire victims will get a warm meal. Their ongoing support throughout the years means everything to not only me but also our department.”

George Gatos is as well-known and liked by everyone who has crossed his path. He’s always smiling and willing to do whatever it takes to help make life a little bit better for everyone else.

George, who will turn 78 on May 25, immigrated to the United States in September 1968. He was born in Nayplion, in the southern part of Greece, and was a jack of all trades, excelling as a carpenter and mechanic, among other occupations. He was also an intelligence officer in the Greek Navy during his military service. He admittedly has no intention of retiring.

“I love it here,” he said. “And, working and living here in this beautiful town of Bristol has been the icing on the cake.”

Tula said it best in conclusion, “We’ve seen kids from years ago work here, grow up here, get married, and raise their own family. And, they always come back to visit. People have been great to us. This is our home.”

What goes into a safe and happy 4th?