Mark Tracy is an Ironman, inside and out.

In early November, the Barrington resident completed Ironman Florida, a grueling triathlon that challenges those brave enough to withstand a 2.4-mile … 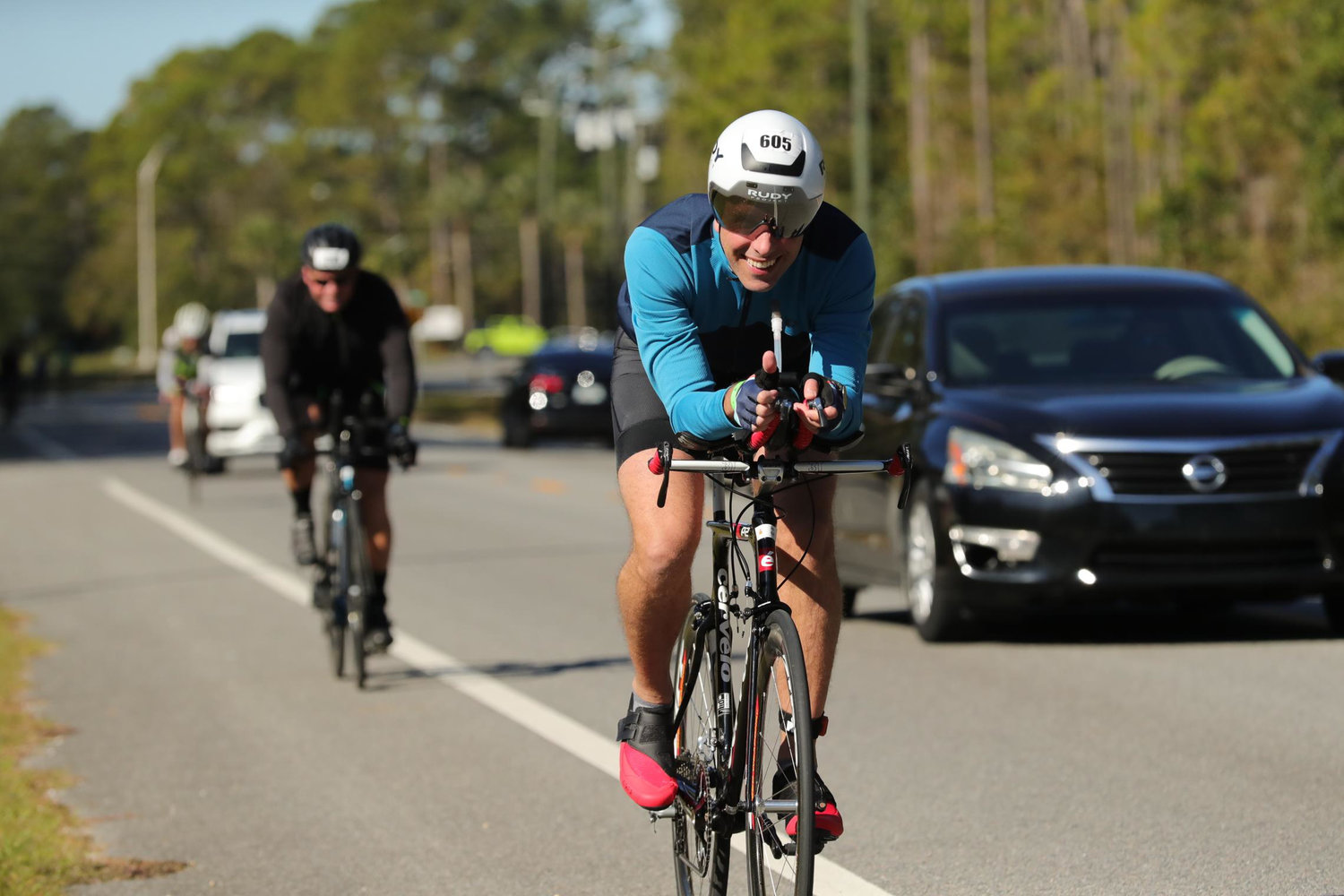 Barrington resident Mark Tracy shares a smile during the bike portion of the Ironman Florida triathlon. He raised more than $11,000 for Camp Braveheart. 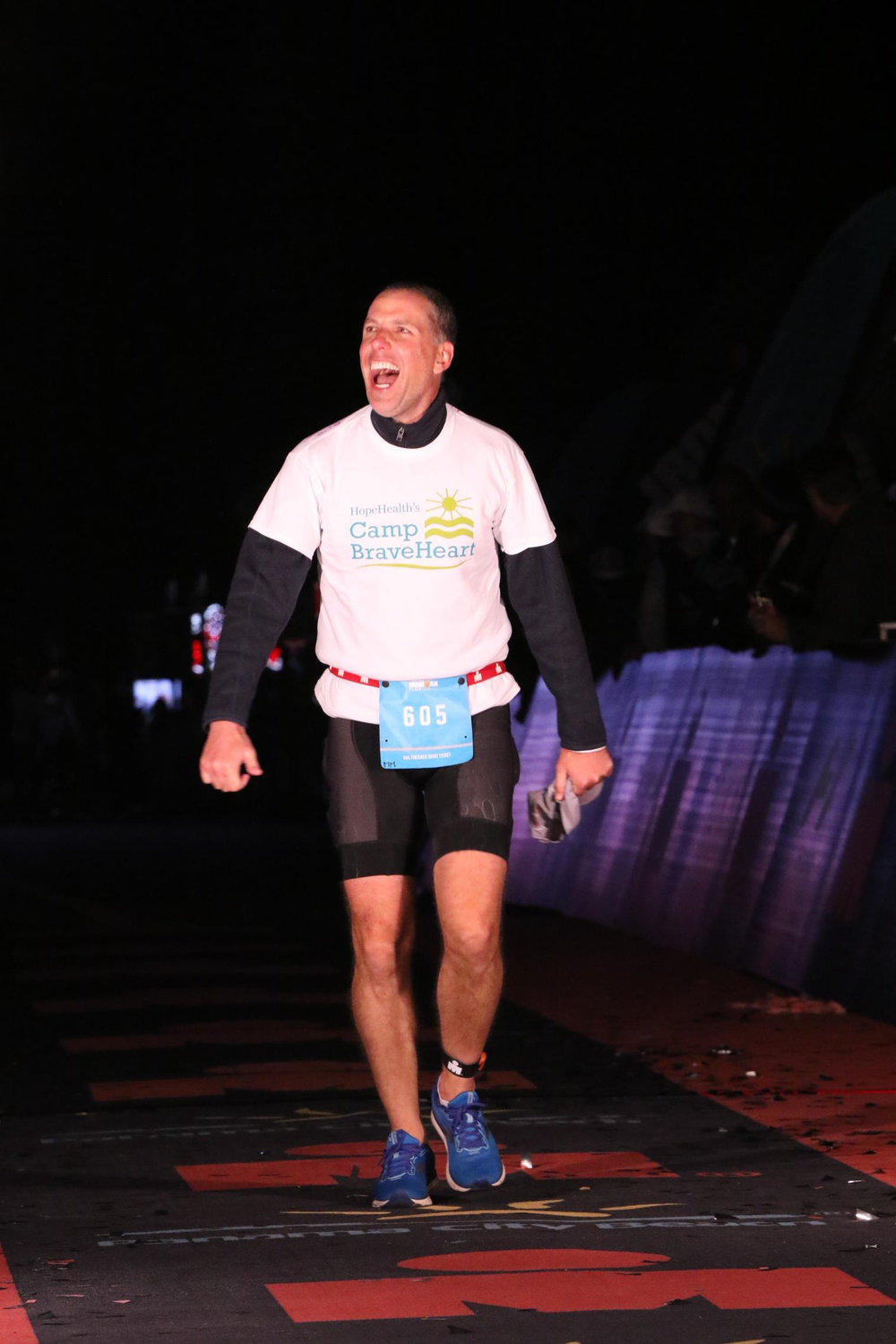 Barrington’s Mark Tracy, wearing a Camp Braveheart T-shirt, crosses the finish line at this year’s Ironman Florida. Mr. Tracy raised money for the camp, which helps children who have suffered a loss of a parent or a sibling. 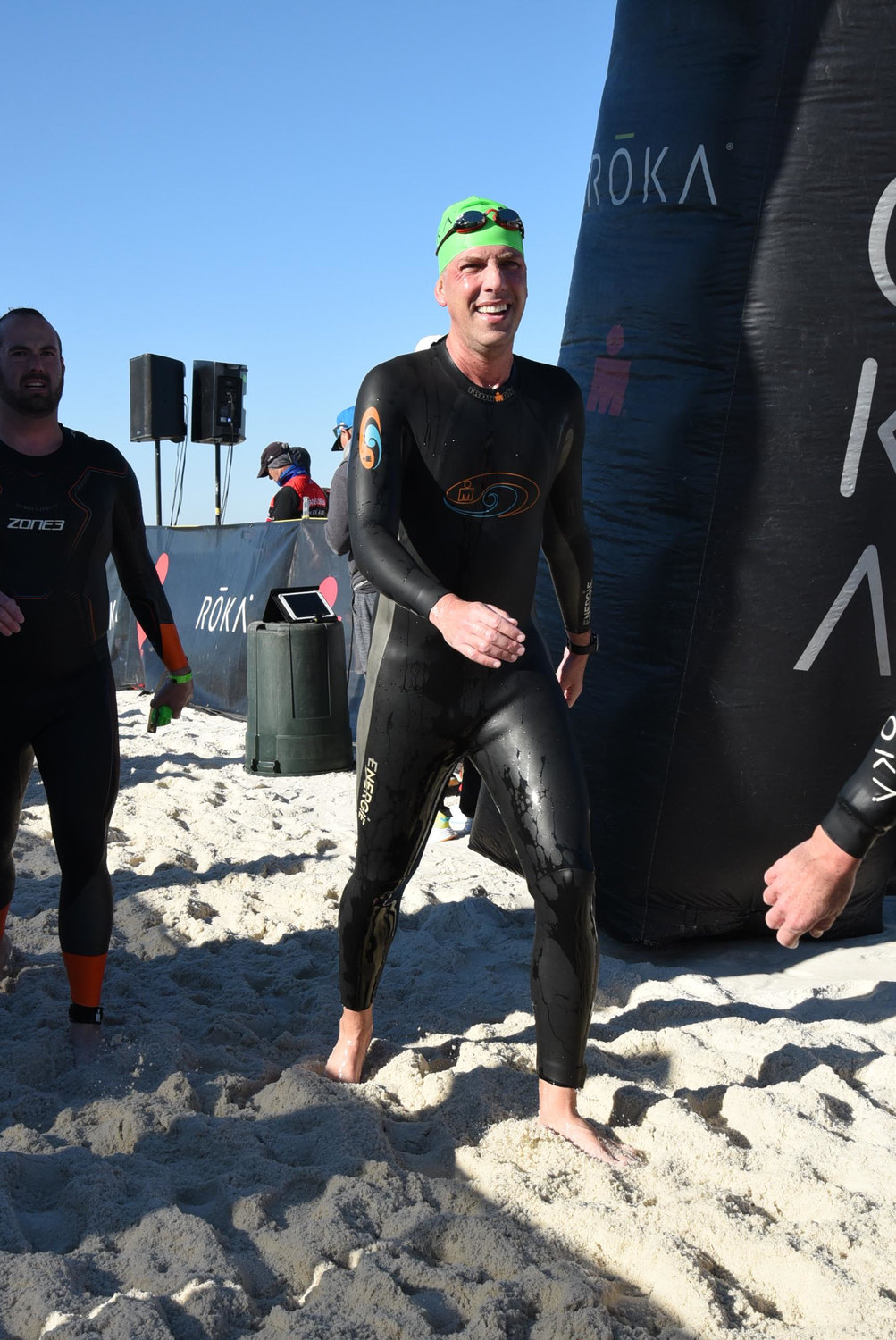 Mark Tracy finishes the swim portion of Ironman Florida. The Barrington resident said countless competitors were pulled from the water for taking too long to complete the swim.
Previous Next
Posted Wednesday, December 8, 2021 7:57 am
By Josh Bickford

Mark Tracy is an Ironman, inside and out.

In early November, the Barrington resident completed Ironman Florida, a grueling triathlon that challenges those brave enough to withstand a 2.4-mile ocean swim, a 112-mile bike ride, and a 26.2-mile run. Mr. Tracy also battled less than favorable weather conditions during the event: Forty-degree temperatures and wind gusts of 20- to 30-miles per hour.

But the 48-year-old resident powered through the adversity, fueled by an inner desire to heal some small measure of his own grief and possibly help others to heal too.

Mr. Tracy was just nine years old when his father passed away unexpectedly, and he was only 18 when his mother lost her battle with cancer. The trauma of losing his parents at such a young age never goes away, Mr. Tracy said, but he was hoping that completing Ironman Florida might move him one step closer to healing the grief.

Mr. Tracy said he dedicated the swim to his mother, and the bike to his father.

Mr. Tracy also used the experience to raise money for Hope Health’s hospice service and Camp Braveheart — a grief camp for children who have suffered a loss. Mr. Tracy has raised more than $11,000 for Camp Braveheart, and donations are still being accepted.

Mr. Tracy said he learned how important hospice care was when his mother was sick. He said his mother wanted to remain at home when she was dying, and hospice made that possible.

“From that point on, I really wanted to get involved, to help hospice,” Mr. Tracy said, later adding “And I always had this crazy dream to do an Ironman.”

Mr. Tracy, who struggled with asthma as a child, began training for Ironman Florida about a year ago. And from June 2021 up until race day in November, he logged more than 1,000 combined miles, biking, running and swimming. He did most of his swimming at Barrington Beach, and he spent a lot of time riding and running on the East Bay Bike Path.

This summer, he also had the chance to visit Camp Braveheart. It was a powerful experience, he said. At the camp, he met children who had also lost loved ones — parents or siblings. He spoke with the children and told them that their loss, while very painful, gives them a special strength. He said they just needed to find that strength.

Mr. Tracy tapped into his own strength throughout the Ironman.

A self-described “slow but steady swimmer,” he powered through chop and against a very strong current off the Panama City Beach coastline while countless other competitors were pulled from the water for taking too long to complete the swim.

About mid-way through the bike portion of the race, Mr. Tracy faced a 25-mile stretch of the course where a relentless head-wind pressed against his progress, challenging him to continue pedaling at all.

Mr. Tracy said it was during that leg of the race that he questioned whether he could continue. Facing real doubt, he remembered the children at Camp Braveheart and the challenges they faced each day. That served as motivation, he said, to press on.

The bike portion of the race took seven hours to complete and left Mr. Tracy with limited time to finish the final leg of the triathlon: a full marathon. He set out out determined to finish, and caught an emotional boost at Mile 13: his children (ages eight and 11) and his aunt met him on the course. He smiled and they cheered. The sun had already set and he still had a long way to go — he told his kids it was time for them to go to bed. He would do all he could to finish the race.

At 16 hours and 33 minutes — just 27 minutes before the course closed — Mark Tracy powered across the finish line.

The race was over.

Tears well in his eyes.

Mr. Tracy learned later that one-third of all the people who started Ironman Florida did not finish.

The two days following the triathlon were nearly as painful as the race itself, Mr. Tracy said.

“The whole body just kind of shuts down,” he said.

About a week later, he was able to go for a run. He did six miles.

“Everything still works,” he said. “It might be a little pissed off, but it still works.”

He said he was very thankful that he was able to avoid suffering any injuries during his training and throughout the race. He said Ironman Florida was a “one and done” experience for him. He said he has a tremendous amount of respect for people who have completed multiple Ironman events, but added: “For me, it’s a one-time deal.”

Mr. Tracy was also very happy to be able to raise $11,475 for Camp Braveheart. He hopes people will continue to donate money to his Justgiving page. He knows how much it will help the campers.