The planning board will decide on Thursday, Dec. 15 whether or not to allow the development to move forward. 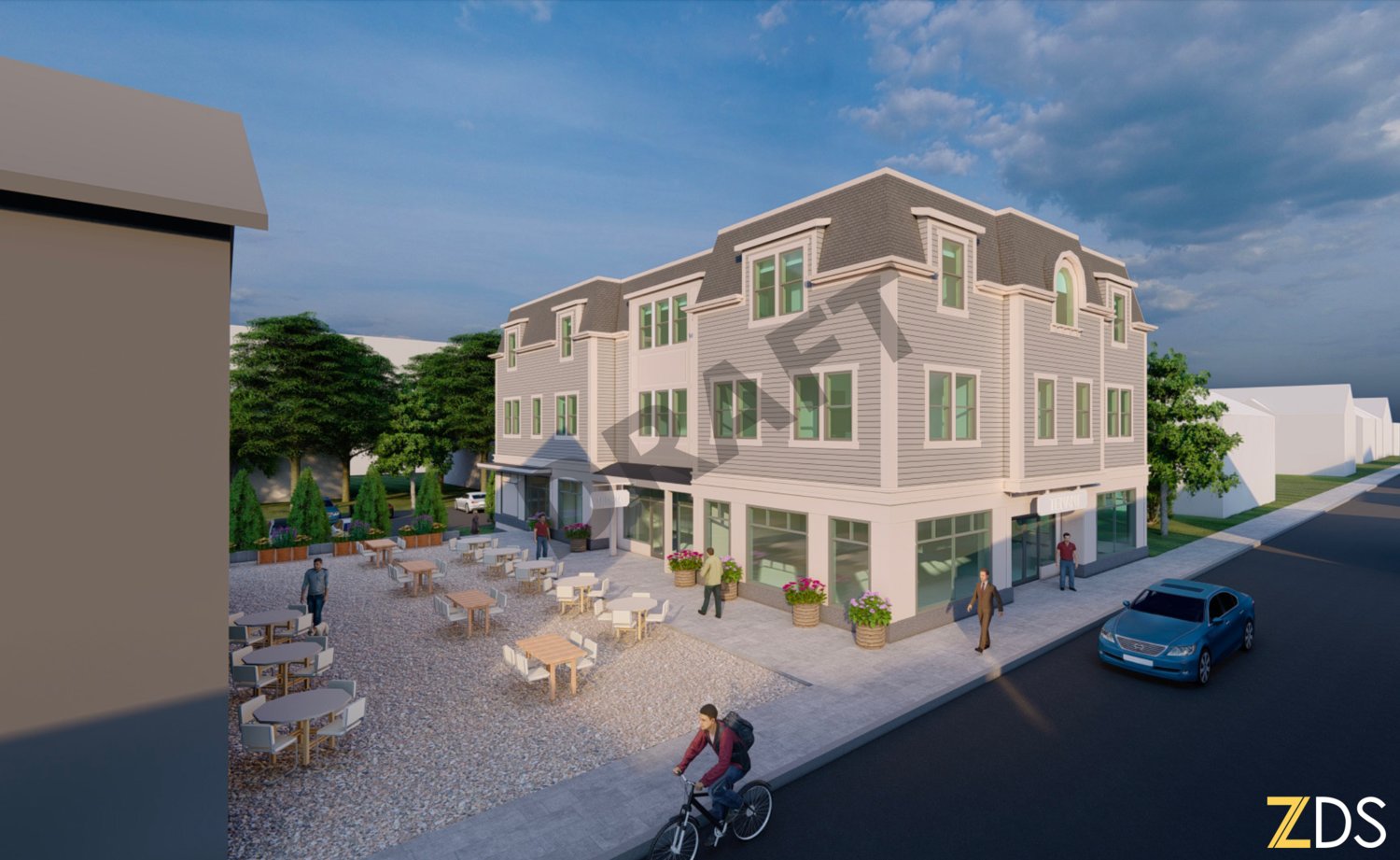 A new draft rendering of the 119 Water St. project shows a three-story building of smaller scale than the originally proposed building, which was four stories and over 50 feet tall at its highest point.
ZDS Inc. 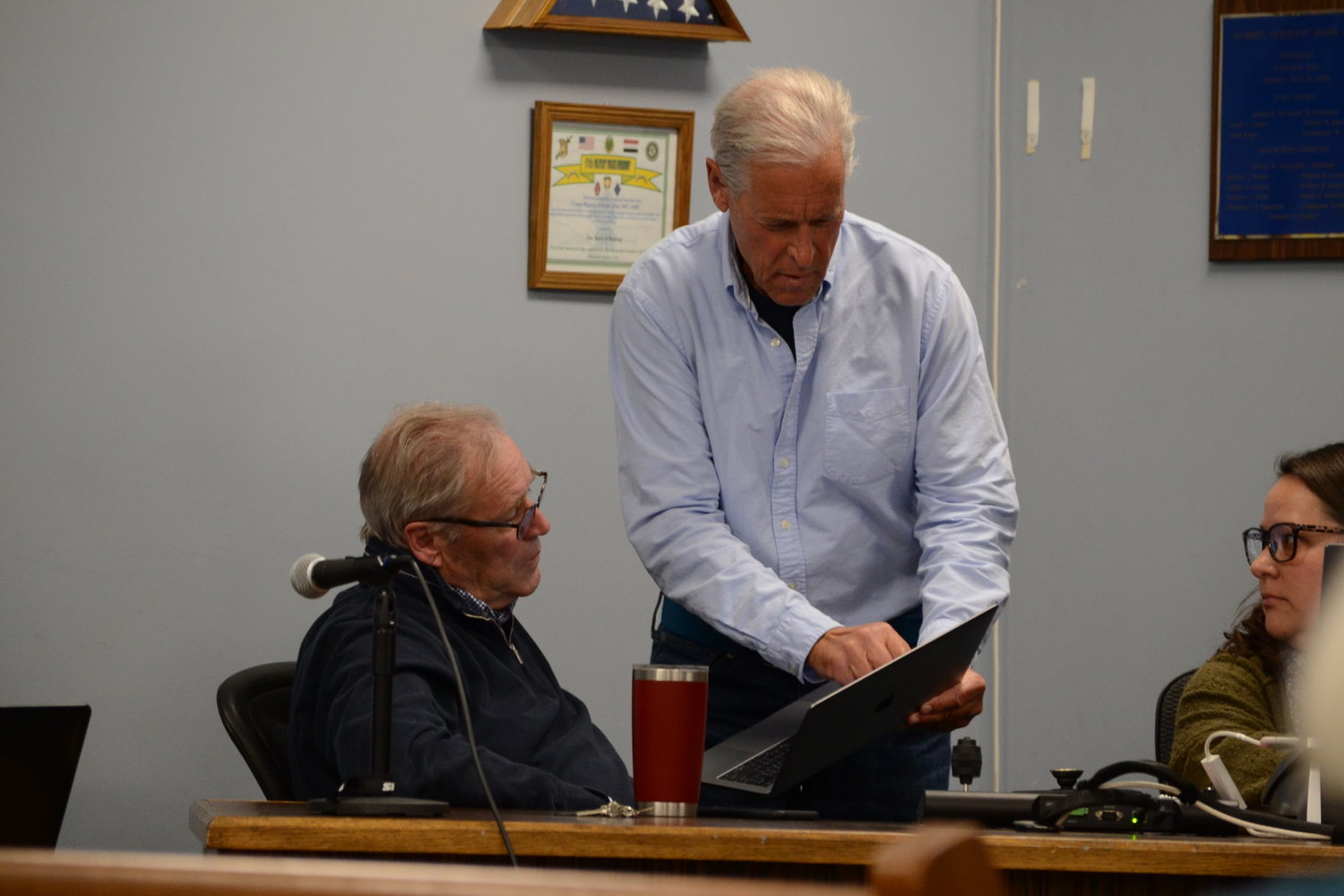 Warren Planning Board Chairman Frederick Massie shows Town Planner Bob Rulli information from the developer indicating a plan for 10 affordable units and two at market rate from their pro forma submitted on Dec. 3. That has apparently been changed again, to only three affordable units and nine at market rate.
Ethan Hartley
Previous Next
Posted Tuesday, December 6, 2022 4:40 pm
By Ethan Hartley

The controversial housing development proposed in the midst of Warren’s historic waterfront that was initially touted as a boon to the town’s affordable housing stock has shrunk — not only in physical size, but in the number of affordable housing units it would provide should it be approved by the planning board next week.

During their meeting Monday night, planning board chairman Frederick Massie informed the audience — consisting largely of proponents of historic preservation in Warren advocating against the destruction of two buildings on the property — that the meeting was being continued to Thursday, Dec. 15 because new information regarding a revised version of the development had been made known this past Friday.

“Both the applicant and town solicitor’s office determined it doesn’t make sense for us to make decisions based on [that new information] at this meeting,” Massie said. “We have that information and you can access it through the building official’s office, but we’re not going to make any determinations tonight.”

That new information, analyzed by the Times-Gazette, is significant. The draft rendering shared with the board shows a reduction in the overall size of the building, from its original scope of a four-story, 51-foot-tall building with 17 units, to a three-story, 42-foot-tall building with only 12 total units.
Also changing is the number of proposed "affordable" units. More accurately, that number has changed twice since the original proposal — which originally proposed 15 of the 17 units to be listed at 80 percent of the area median income (AMI), and just two at market value.

Prior to Friday, according to the financial pro forma submitted to the planning board dated Dec. 3, 2022, the developer had intended on presenting a plan with the three-story, smaller building where 10 of the 12 units would be listed at 80 percent of the AMI, and two would be at market rate.

But in the final minutes of the planning board meeting on Monday, when Massie was summarizing the changes the board had to deliberate next week when proceedings continue, Town Planner Bob Rulli spoke up to say that the developer had actually sent an even more recent pro forma — one where they propose only three affordable units and nine at market rate.

“Just so you don’t think I’m making stuff up — in the information we were given, it very clearly says 10 affordable, two market,” Massie told the audience following Rulli’s statement. “If that is not true, clearly they gave us the wrong information and that will come out in the next meeting.”

For clarification, even if the developer goes with just three affordable units as proposed, the development would still reach the required threshold of 25 percent total affordable units under state statute in order to qualify for the comprehensive permit application.

A monumental decision ahead
The changes to the proposal sets the stage for a big decision next week, when the planning board will have to decide on each piece of the proposal. Under a comprehensive permit, all requested variances are considered at once, which in this case includes variances for the building’s height, the amount of parking, setbacks from the street, and the waivers to demolish the two existing properties.

As outlined in our sidebar story on the front page, historic preservation advocates have been relying (in part) on the original project dimensions as a key reason for why the project should not be allowed. A four-story building over 50 feet tall, they argue, clearly does not fit within the comparable scope of buildings in the district, and would constitute a legally-sound reason for the town to reject the developer’s proposal.

“The proposed new construction is a single mass four stories high encompassing the entire frontage of historic lots that are combined,” Talmage continued in the letter. “As such it would introduce a property into the heart of Warren’s Historic District that is out of scale and has radically different massing from the surrounding area.”

Similar sentiments were included in letters from the Rhode Island Historical Preservation & Heritage Commission, as well as comments from the town’s Voluntary Historic District Commission.

However, some local preservation advocates remain adamant that even the smaller building proposed does not ease their larger concerns about the proposed demolition to make way for the development.

“I am against the demolition of the buildings,” said Eileen Collins, president of the Warren Preservation Society. “I don’t believe they need to be demolished, and the idea it’s all part of one package coming at us and they have to come down, I don’t feel they’ve demonstrated the buildings have to be removed.”

Collins reiterated her belief that the developer has not done proper due diligence, either by allowing a contractor that specializes in historic renovations to assess how much money it would cost to renovate the properties, or by exploring the potential of utilizing tax credits to renovate those buildings and convert them into rental units.

“If the owner is interested in developing affordable housing, he has the opportunity to do that with the buildings existing there right now,” Collins said, saying that a total of eight rental units and one commercial unit could be created among the two buildings that exist. “I don’t like the way the whole process has happened. I think it’s unfair, and I think it’s a misinterpretation of the intention of the state law.”

Also reached Tuesday morning, planning board chairman Massie said that he was as surprised as anyone when he learned the applicant had altered (again) the plans regarding the number of affordable units, from 10 of 12 total, to just three. While in a previous interview he had been praiseworthy of the developer’s willingness to negotiate on the building’s overall size and aesthetics, he said that change added an unpleasant sourness to the process.

“That’s a little difficult to swallow,” he said. “But I haven’t heard the explanation and I’m withholding judgment until we get a presentation by the applicant, but it’s been a very frustrating process to hear something like that at the last minute and have two conflicting documents.”

Massie went on to say that he was discouraged by the adversarial atmosphere that has been noticeable between those opposed to the project and the members of the planning board, who he said have been trying to parse out a complex process in order to achieve the best result for the town as a whole.

“The hostility is almost palpable, and I think it’s misplaced,” he said. “Here we are as the planning board trying to work this out in a difficult situation and championing a lot of the points being made by the public,” he said, mentioning the board taking steps to ask the developer for concessions on the building’s size and appearance. “It has felt as if there’s a complete distrust of the whole process. That’s not beneficial to anybody. You really want to be able to say, how can we make this the best we possibly can under the circumstances.”

A call for comments made to developer Daniel Teodoro was not returned prior to press time on Tuesday.