Founded in 1987, the volunteer-run nonprofit organization strives to protect and preserve open space for the enjoyment of all, while advocating for measures to increase resiliency against the wide-reaching implications of manmade climate change and protect native species. 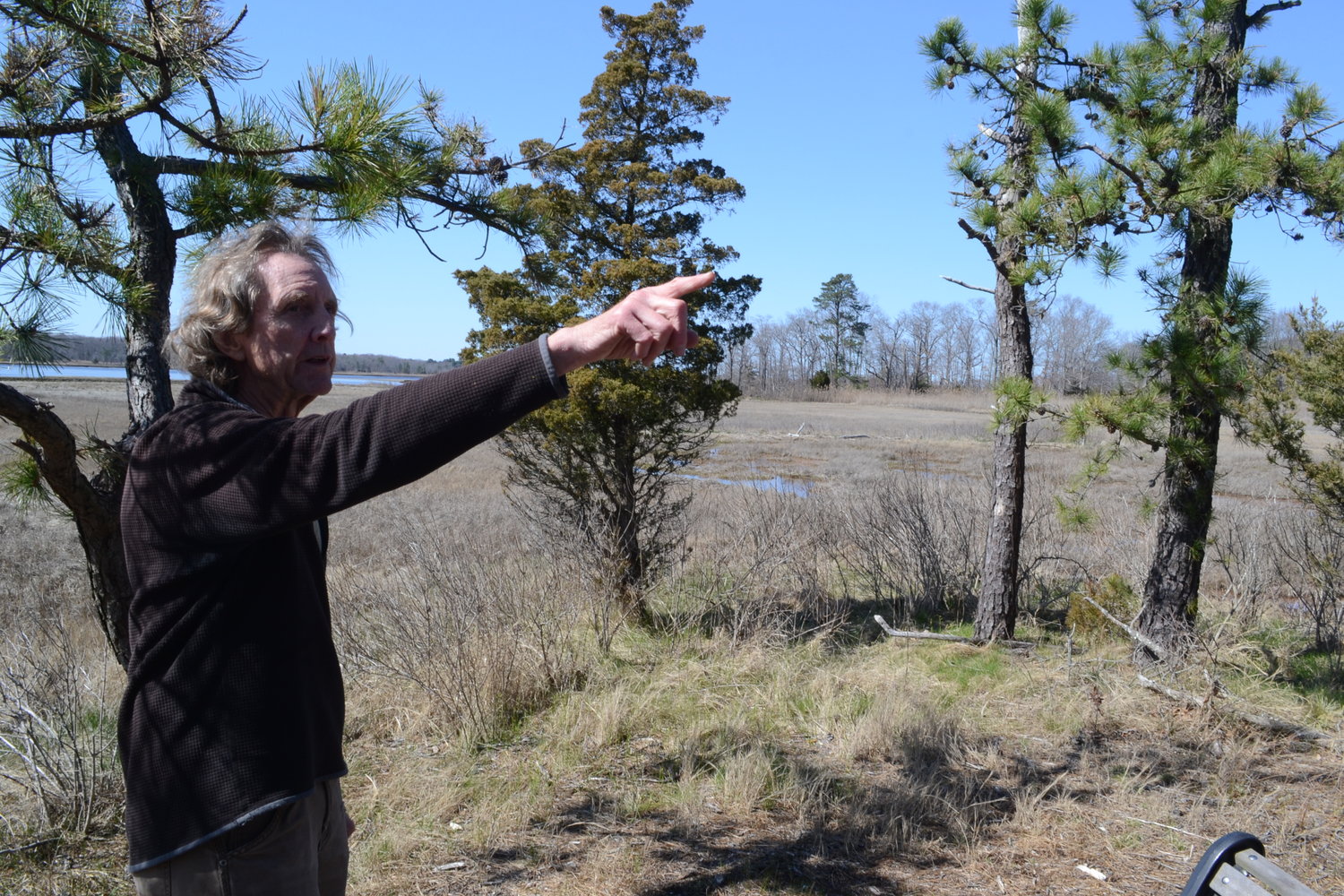 Rock Singewald, President of the Warren Land Conservation Trust Board of Directors, points to areas of Haile Farm Preserve during a walk through the public trails in April.
Ethan Hartley 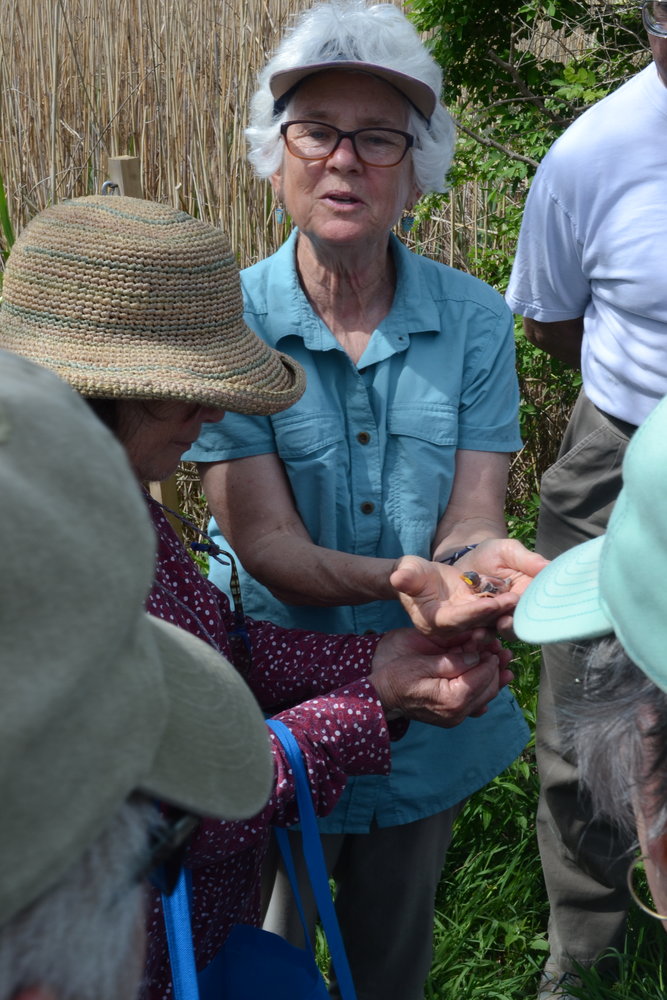 Deirdre Robinson, co-director of the Saltmarsh Sparrow Research Initiative, holds a five-day-old recently hatched finch chick to illustrate the delicate balance of our impact on our surrounding environment, and the real beings at risk as a result of those impacts.
Ethan Hartley 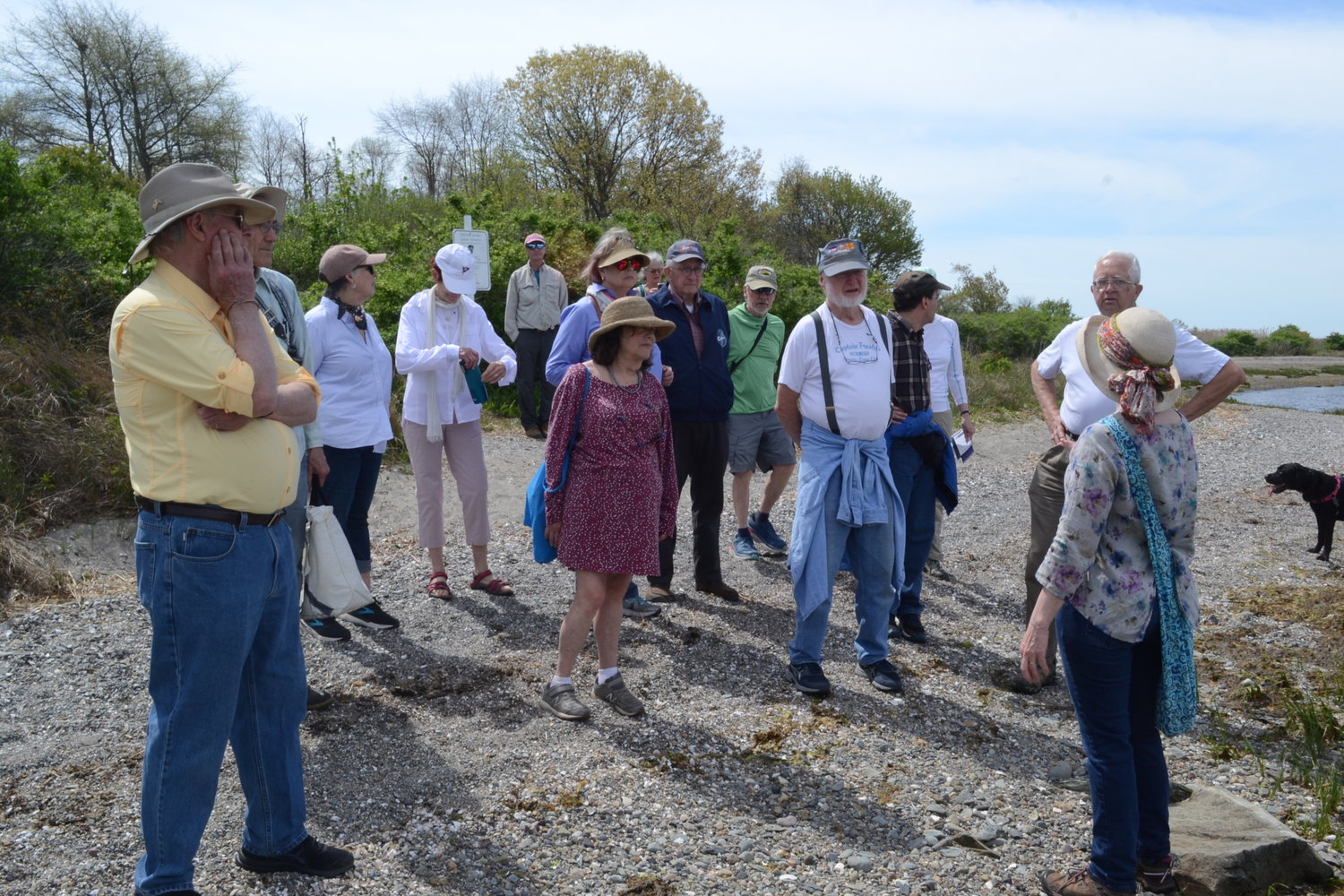 A group of about 20 people showed up to walk Jacob’s Point on Saturday and learn about efforts to safeguard the health of the salt marsh. It is part of an ongoing series by Imago Gallery in Warren.
Ethan Hartley 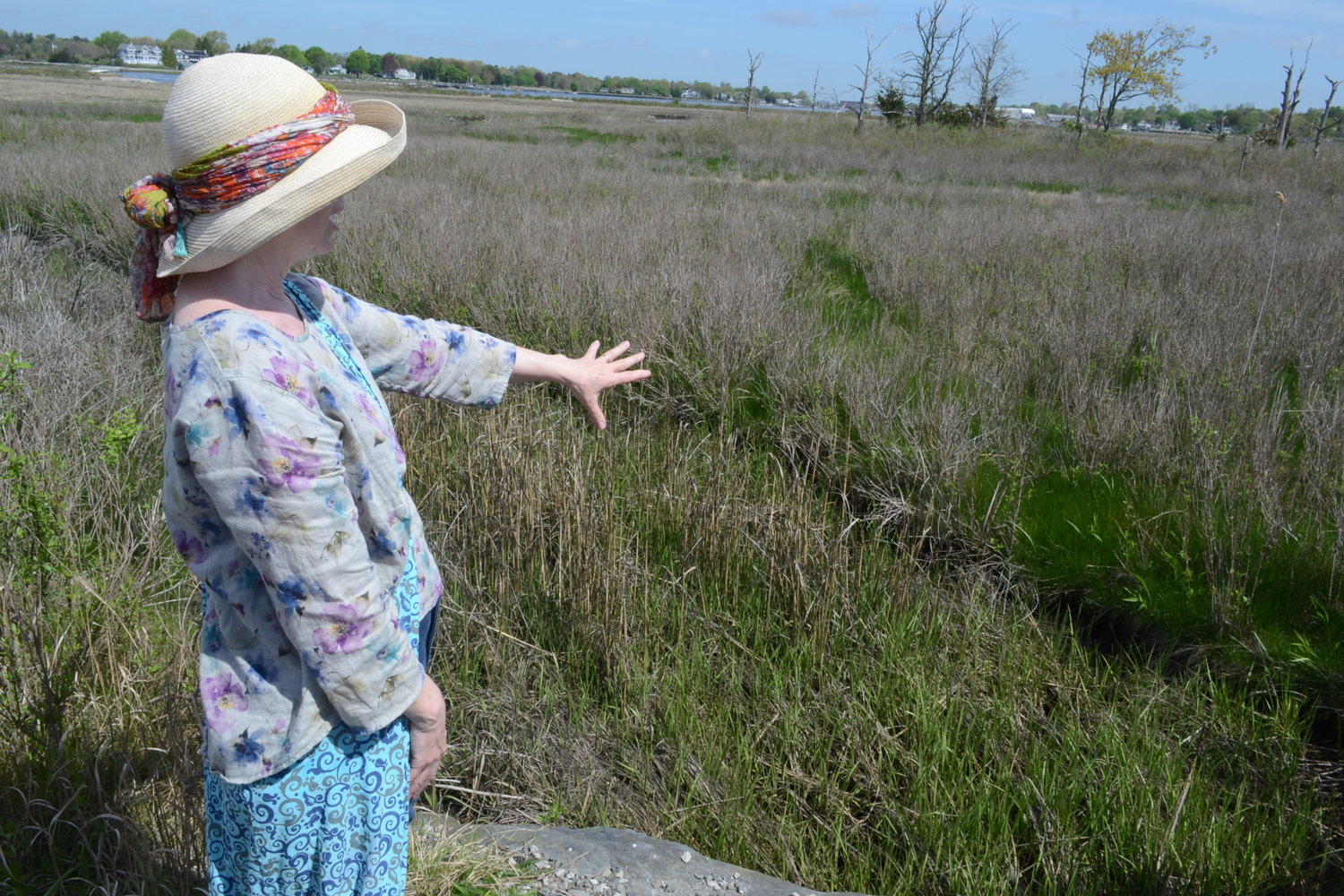 Jenny Flanagan, Treasurer of the Warren Land Conservation Trust Board of Directors, points to a culvert in Jacob’s Point. The group hopes to work with DEM to perform more work to improve tidal flow in the area.
Ethan Hartley
Previous Next
Posted Wednesday, May 18, 2022 8:00 am
By Ethan Hartley

Naturalists will often point out the inherent connection between humans and the environment around them. The humans must respect the environment and maintain proper stewardship in order to preserve a healthy balance, prevent avoidable ecological damage and safeguard their own best interests.

This is the message and mission of the dedicated individuals behind the Warren Land Conservation Trust (WLCT). Founded in 1987, the volunteer-run nonprofit organization strives to protect and preserve open space for the enjoyment of all, while advocating for measures to increase resiliency against the wide-reaching implications of manmade climate change and protect native species.

“The goals are to ensure that this is a healthy community for humans, wildlife and critical habitats,” said Jenny K. Flanagan, WLCT Treasurer.

If you have taken a detour off the bike path for a stroll along the beach at Jacob’s Point, or gone for a shady walk through the woods at Haile Farm Preserve, you have been a beneficiary of the WLCT’s work. They hold over 200 acres of land throughout the town, much of which is protected salt marsh. Four properties (the two aforementioned, as well as Toweset Landing and Tom’s Island) are open for exploration, with a fifth (Sowams Meadow Preserve) eventually opened to the public as part of a four-year restoration process, according to Flanagan.

Allowing public access to areas, where possible, is an important part of the mission, because it enables people to enjoy and become invested in the resources that the Trust strives to protect. Healthy salt marshes are important not just to the many species of birds, invertebrates, insects, fish and flora that call them home, they also provide a crucial role for humans in coastal communities by acting as natural flood barriers — capable of absorbing immense amounts of storm water and filtering out impurities naturally.

Even more, the promotion of a healthy environment that is also accessible to the public provides tangible fiscal benefits.

“Having salt marshes has a protective benefit environmentally, and it is an economic driver as well,” said Flanagan, referencing a study that found every acre of salt marsh adds the equivalent of $23,000 in storm protection and $5,000 in tourism value. “Having Jacob’s Point right off the bike path adds to the appeal of the bike path as a public amenity. People come to the East Bay because of the recreational opportunities here.”

A community-wide effort
In Warren, the WLCT is not alone in its aspirations, and they have found many public and private partners to help advance various initiatives throughout the years.  The 61-acre Haile Farm Preserve (which opened to the public three years ago today) serves as a wonderful example of mutual collaboration towards a common goal that includes improving public access to a beautiful outdoor resource and improving climate resiliency.

The property, which dates back all the way to 1682, was recently donated to the Trust by the Town of Warren, and they then received a Wetland Reserve Easement from the Natural Resources Conservation Service (NRCS) that helps with the maintenance of the forest portions of the property. The Trust continues to work with NRCS, the Town and other State and Federal agencies on the goal of eventually protecting the entire Palmer River shoreline. Neighbor Jade Engineered Plastics gave the Trust permission to cross their property to access trails and also dug up a large swath of the parking lot that was utilized when it was a FedEx facility in order to re-plant wild grasses and help abate some stormwater. Boy Scouts helped build walkways that traverse wetter areas on the trails, and legislative grants from Reps. June Speakman and Jason Knight and Senator Walter Felag provided signage, lumber for additional boardwalks, and combined with in-kind installation work by Pearson Pilings of Swansea, Mass. to erect a new osprey tower.

Haile Farm is also currently at the epicenter of one of the WLCT’s major efforts regarding a detention pond built in the 1980s that is now leeching untreated stormwater into the wooded area behind the berm. This has resulted in the emergence of invasive phragmites — tall reeds that thrive in freshwater, clog water passageways, and are notoriously difficult to mitigate.

The Trust recently received a grant (thanks to Town Planner Bob Rulli) through the EPA’s Southeastern New England Program (SNEP) to fund an engineering study to assess what could be done about reducing the flow of untreated stormwater to the pond through green infrastructure practices that remove pollutants. This would allow for a retrofit of the pond to address the leaks and the existing toxic algae formation. Flanagan posits it could take a few years to mitigate the detention pond and remediate the phragmites, but the reward would be additional acres of healthy salt marsh habitat and a path for future marsh migration as sea levels continue to rise.

That effort dovetails nicely into the massively scaled Market to Metacom project spearheaded by Rulli, which seeks to reclaim a large portion of wetlands near Market Street through a calculated retreat of existing residences nearby over a period of 50 or more years.

“If it comes to its full fruition in a proactive and functional manner, there will be 200 acres more of salt marsh in town to protect the remaining areas from storm water,” said Flanagan.

Members of the public are also helping spread the word. Linda Megathlin, a Warren artist, writer, photographer and member of the Warren Arts and Culture Commission, has helped advertise a month-long series at Imago Gallery called “Rising Seas: Envisioning the Future Ocean State”, which includes talks by climate change authors and Town Planner Bob Rulli, as well as public walks at Jacob’s Point and the Touisset Wildlife Refuge in collaboration with the Audubon Society of Rhode Island and Roger Williams University.

More perspective at Jacob’s Point
Deirdre Robinson, co-director of the Saltmarsh Sparrow Research Initiative, delicately transferred a five-day-old baby finch chick into the hands of a woman who had joined for a public walk at Jacob’s Point this past Saturday morning. The tiny creature, completely defenseless and vulnerable, was there to serve as an example.

“I think sometimes we might be guilty of giving an overload of information. We need to switch to an emotional channel,” Robinson said. “We are programmed to bond with animals, but we override it as we get older…I’m asking us to de-program and become open again.”

Robinson and the Saltmarsh Sparrow Research Initiative has spent years studying the endangered Saltmarsh Sparrow, a resident of low-lying salt marsh areas such as Jacob’s Point that has been jeopardized by rising seas caused by climate change. It is another branch of the tree emphasizing the connectivity between the health of the environment and the implications on native species.

In 2008, the WLCT worked with DEM to mitigate phragmites and restore healthy tidal flow at Jacob’s Point — an initiative they hope to continue in the next couple years in a southernly direction towards the Audubon Society in Bristol. Such work is crucial to controlling the rate of flooding within the salt marsh and thereby protecting the preferred nesting locations for saltmarsh sparrows.

All of the work, from proactively protecting humans against the damage wrought by rising seas, to trying to save a small species of local birds, is helping move the dial in a big way — all from one of the smallest towns in the smallest state.

“It’s having an impact,” said Rock Singewald, President of the WLCT Board of Directors. “People are starting to wake up.”