Seven artists, out of a pool of 38 hopefuls, were selected to paint utility boxes around town

Art will replace drab infrastructure this Spring, when seven commissioned artists spread out to paint electric utility boxes around Warren.

This is the second round of public art projects that …

Seven artists, out of a pool of 38 hopefuls, were selected to paint utility boxes around town 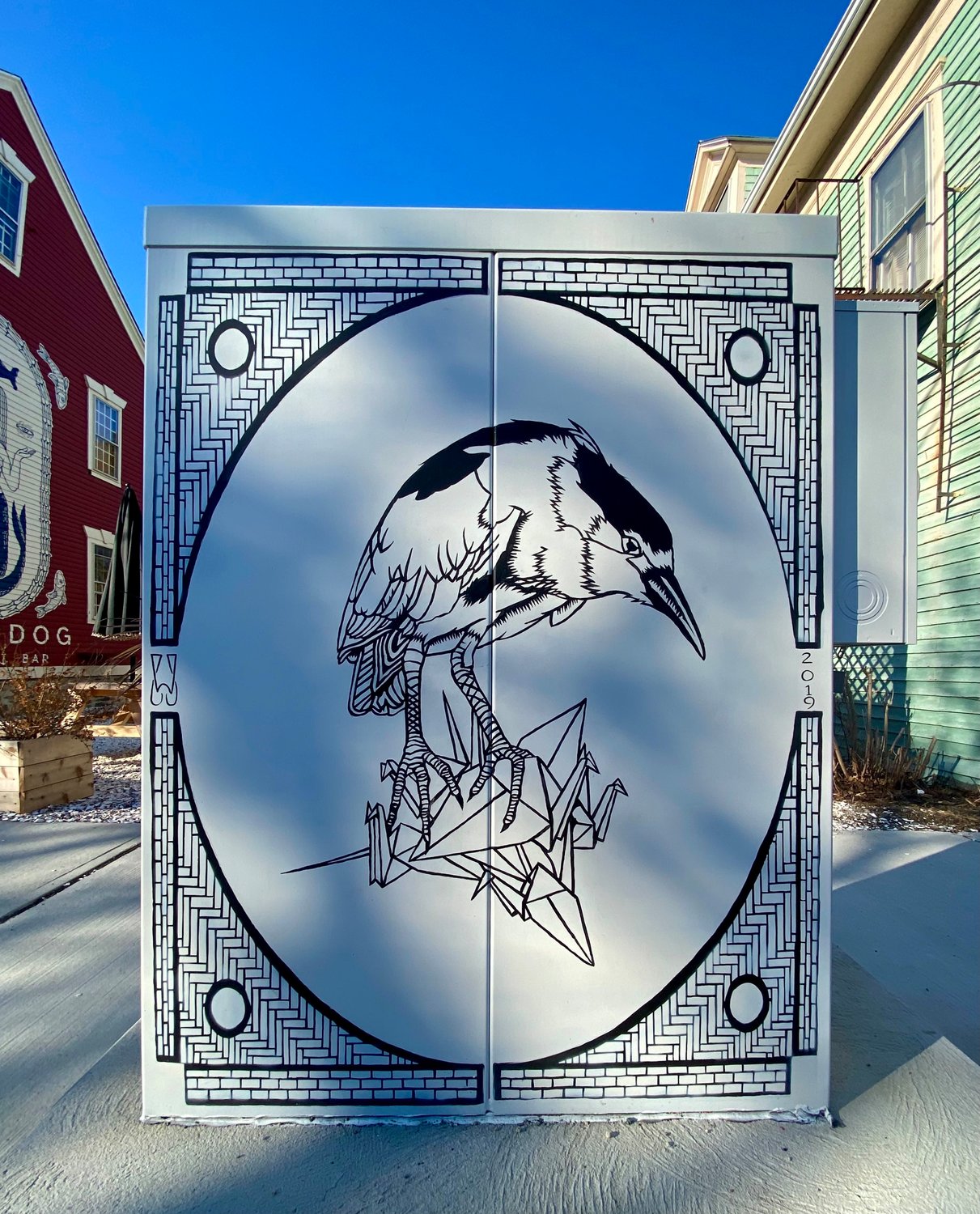 William Schaff of Water Street was one of two artists selected in the first round. 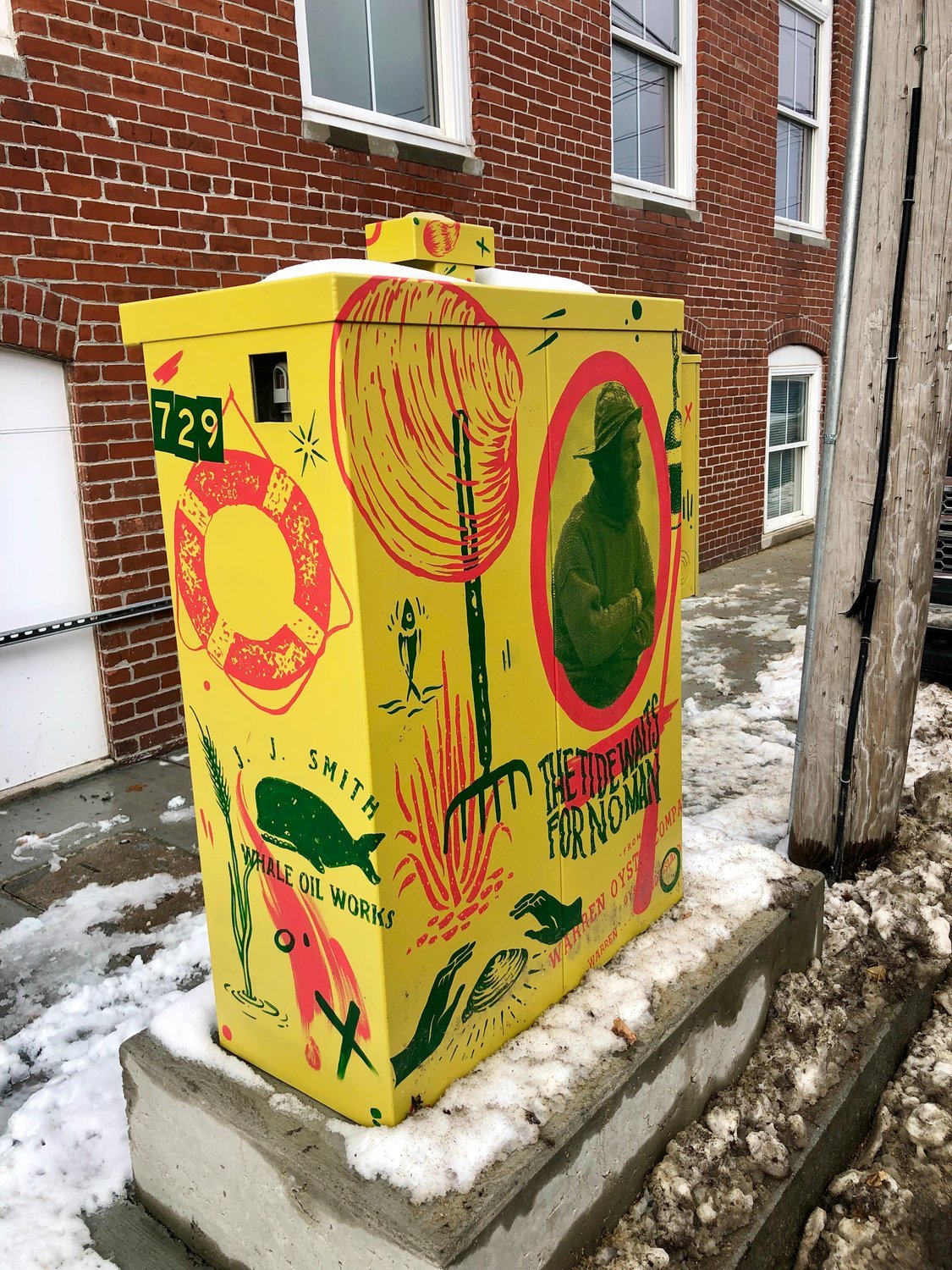 In the first round of public art, Adam Tracy transformed this utility box on Water Street.
Previous Next
Posted Thursday, January 21, 2021 10:58 am

Art will replace drab infrastructure this Spring, when seven commissioned artists spread out to paint electric utility boxes around Warren.

This is the second round of public art projects that began here in 2019, when Warren partnered with The Avenue Concept, a Providence non-profit which champions public art, to commission the painting of two electric boxes on Water Street. Warren artists Adam Tracy and Will Schaff were chosen in that first round.

After Warren received a $75,000 state Take It Outside grant this past fall, officials put out an open call to artists to paint additional boxes and were overwhelmed with 38 proposals. Town officials, The Avenue Concept and Uriah Donnelly of the Warren Arts & Cultural Commission reduced the number to 10 and this past week made the final selection of seven artists.

The boxes will be painted this coming spring and the public will be invited to join the artists as they paint selected boxes. Each artist will receive $1,000 from the town.

Locations include the corner of Main and Miller streets, the East Bay Bike Bath near Campbell Street, Child Street, Joyce Street and other locations downtown area. Proposals will be finalized in the coming months.

Warren Town Planner Bob Rulli said Warren officials hope to continue to provide opportunities for public art in the future, with plans to include art installations along the East Bay Bike Path and Railroad Avenue, as well as at the Warren Gateway Center (former National Grid site) on Main Street.

Selected artists for this round include:

Heather J. Annis, an artist and educator from Providence. She focuses primarily on collage and ink, and has has facilitated workshops across the country for children, teens, and adults in a wide variety of mediums.

Kristin DiVona is an illustrator, educator, designer, and the Visual Information Specialist for the Chandra X-ray Observatory, one of NASA’s space-based telescopes. She designs and develops print, web, and interactive educational tools, such as the new Reach Across the Stars, an augmented reality app designed to encourage young girls to envision themselves in science, technology and math-related careers. She works on her fine art practice in her Warren-based studio.

Holly Emidy of Warren is an accomplished surface designer with more than 30 years of experience. She specializes in pattern-based layout and design in textile, wallpaper and other decorative applications, though she works in many styles and mediums. Ms. Emidy has worked independently, as part of a team and as a studio manager, and enjoys being surrounded by color, design and creativity.

Jacob Gringa/Makerjake is a Massachusetts-based educator and artist well-known for his unique approach to portraiture and animals. In his professional mural practice he integrates the iconography of his First Nations ancestors with contemporary design elements. He teaches first through fifth graders at a small public school outside of Boston, where he has taught the last four years.

Adam Kelley was born and raised in Providence. While pursuing his BFA he was able to keep a focus on manual print disciplines, particularly silk screening and woodblock printing, and continued that work back in Rhode Island after graduation at the AS220 printshop. He maintains a steady art practice and has the opportunity to do commissioned work.

Connor Robinson is a Rhode Island-based artist who completed his BFA in illustration at RISD last year.  He has exhibited at Woods Gerry Gallery and was a Featuring Artist at RAW Artists: Connect, both in Providence.  He began freelance work in 2019 and has completed commission work for Brown Political Review, Brown Jug, and the Scituate Tri-County Commission, amongst others.