The train keeps rolling for the Mt. Hope softball team as they edged Middletown 2-1 at home on Wednesday and crushed Westerly 8-1 away on Thursday to stay undefeated with a record of 7-0 at the top … 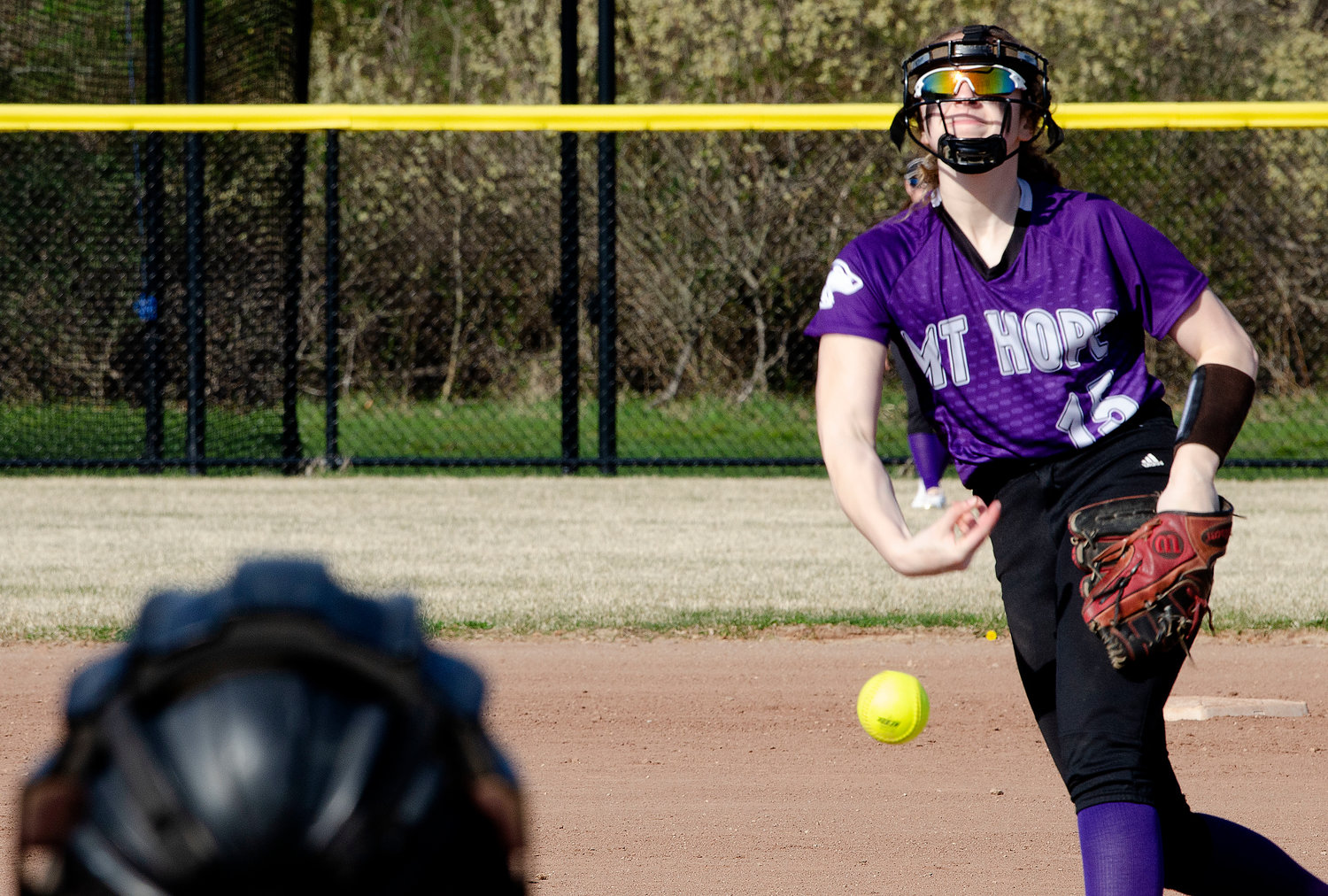 Huskies junior pitcher Reily Amaral has been red hot, striking out 18 and throwing a no hitter against Westerly and 16 more against Middletown. Amaral improved her undefeated record to 7-0.
Photos by Richard W. Dionne, Jr. 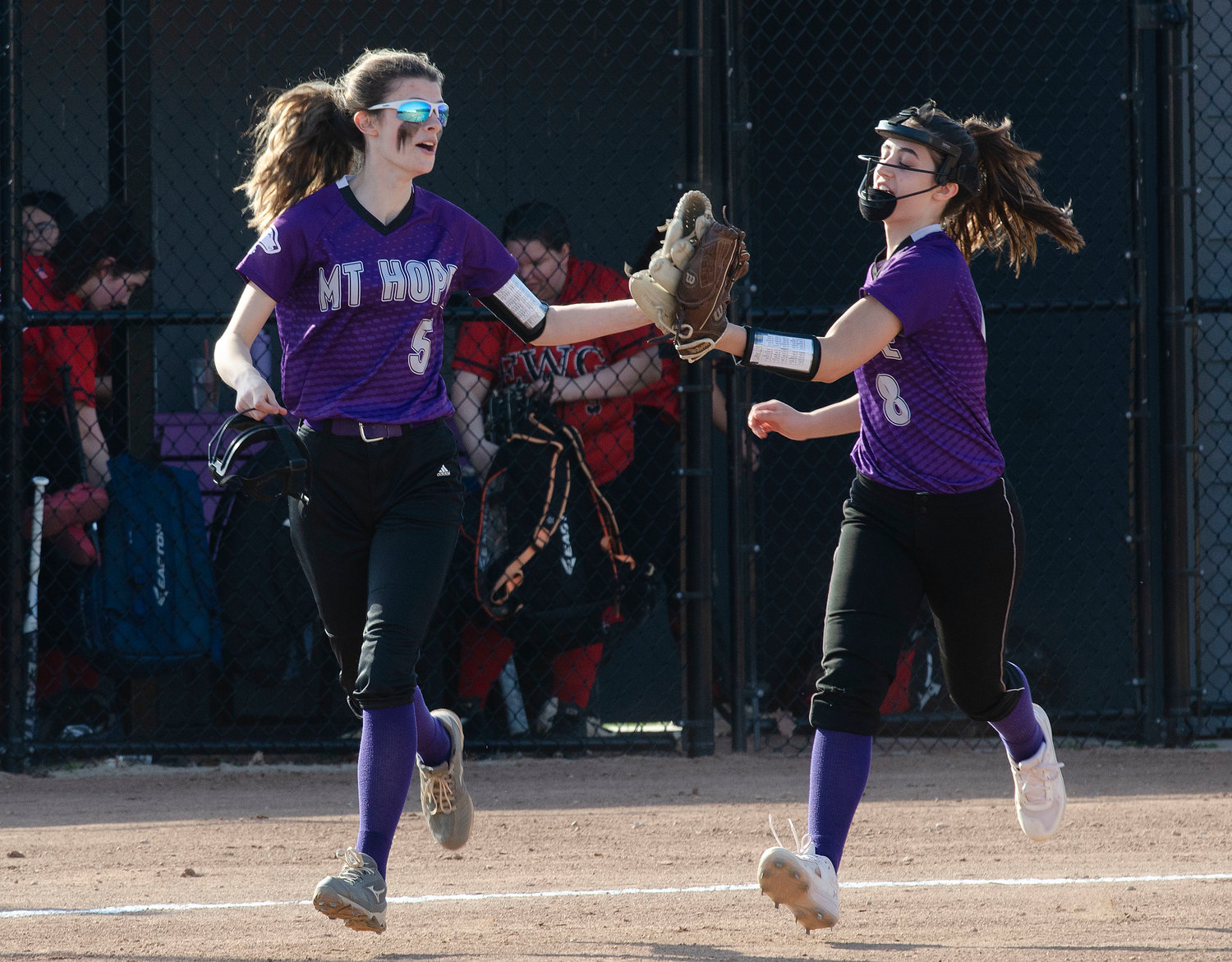 Huskies third baseman Sydney Crowell gets a glove bump from shortstop Julia Allen after the home win over Exeter-West Greenwich. 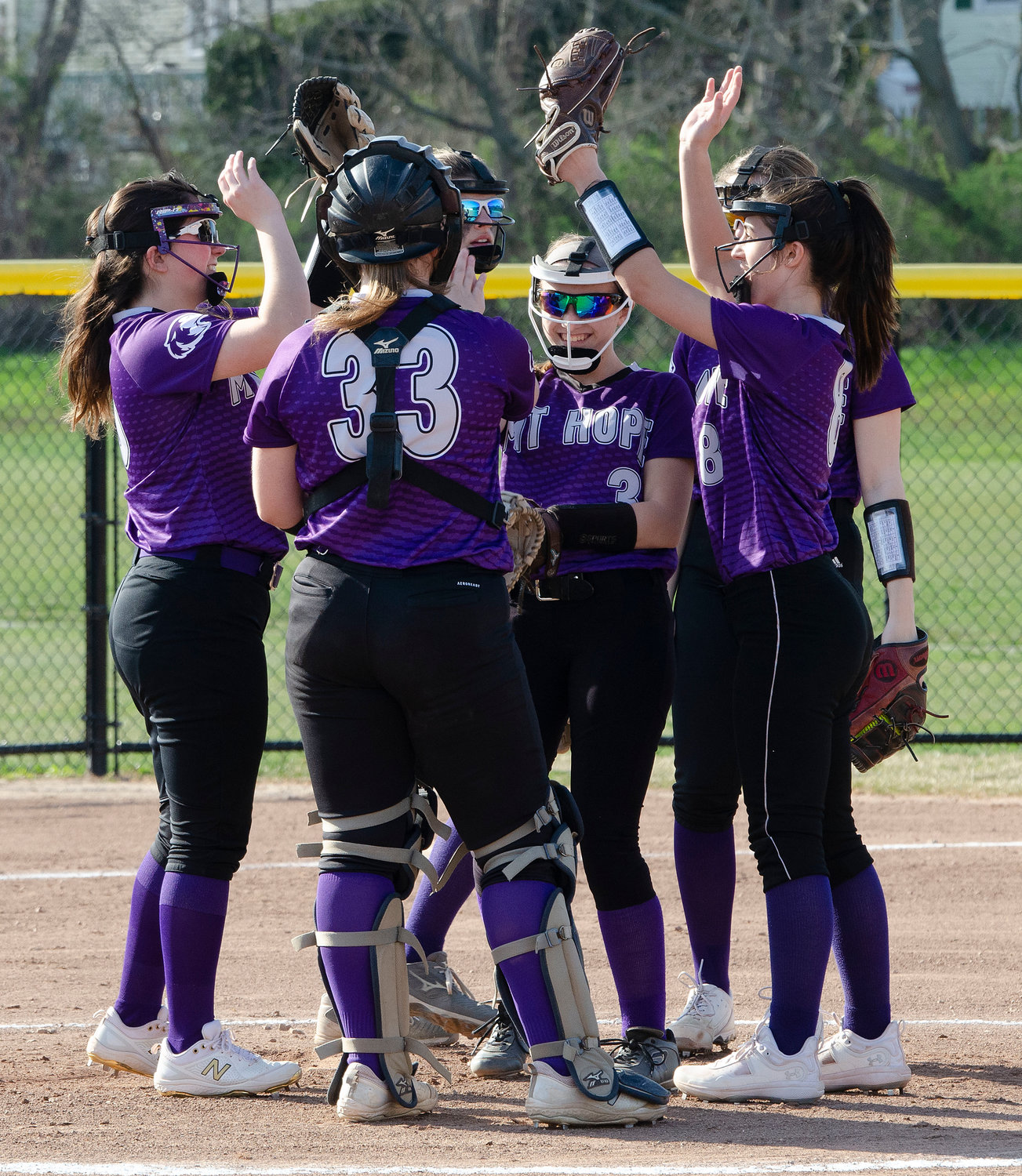 The infield performs a pre-inning chant with pitcher Reily Amaral during the Exeter-West Greenwich game. 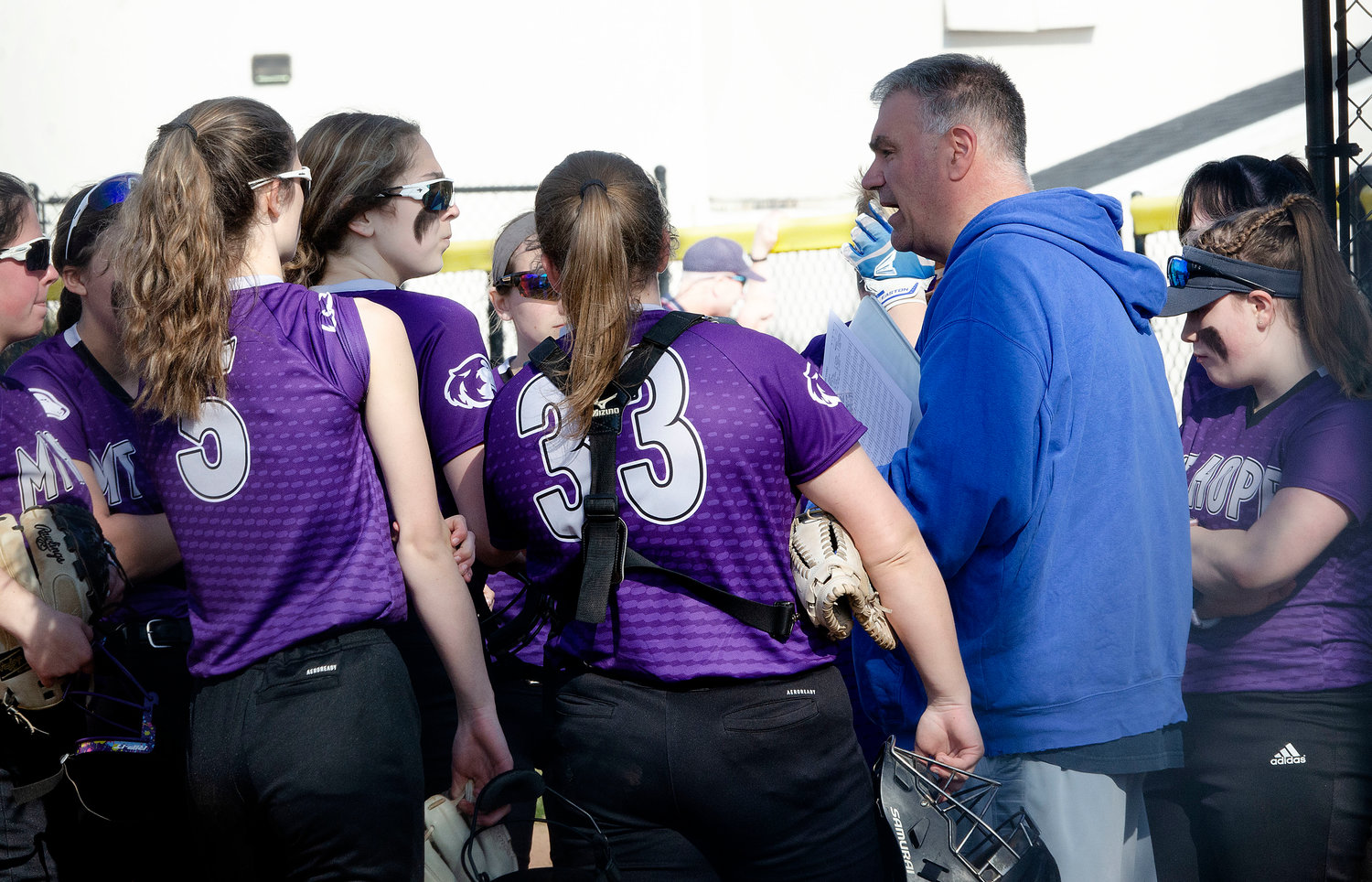 Huskies head coach Craig Giarusso (right) speaks to the team between innings during their game against Exeter-West Greenwich. 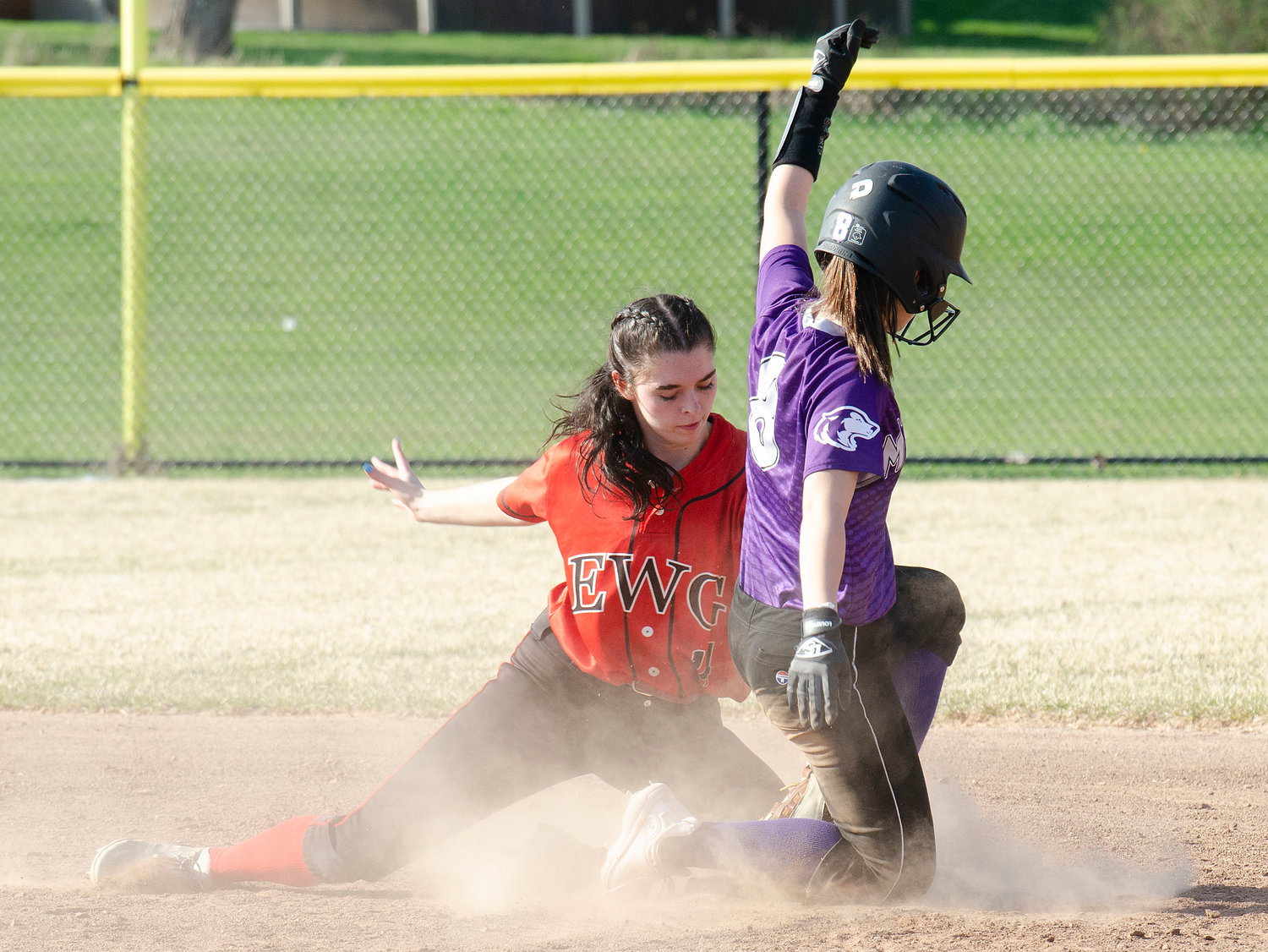 The train keeps rolling for the Mt. Hope softball team as they edged Middletown 2-1 at home on Wednesday and crushed Westerly 8-1 away on Thursday to stay undefeated with a record of 7-0 at the top of Division II South.

Mt. Hope pitcher Reily Amaral has dominated on the mound this season striking out 95 batters in the team's first seven games.  The junior struck out 16 batters in a 2-1 pitcher’s duel against Middletown and fanned 18 and no hit Westerly in an 8-0 blowout.

The Mt. Hope offense struggled as Middletown starter Karissa Dupuis kept pace with Amaral and struck out 16 Huskies and gave up just three hits. But walks, steals and heads up base running earned the Mt. Hope a pair of runs to keep their undefeated streak alive. Huskies speedy lead off hitter Ella White singled in the bottom of the first inning and moved to second on a wild pitch. White ran to third on a single by Sydney Crowell and scampered home on a pass ball to give the Huskies a 1-0 lead.

Eight hitter Julia Allen led off the second inning with a walk. The shortstop moved to second base when Sammy Malafronte also drew a walk. The pair pulled off a double steal with one out and Allen scored on an error to give Mt. Hope a 2-0 lead.

The Huskies played solid defense behind Amaral as she spread out 7 hits against the third place Waves. Karissa Dupuis of Middletown scored in the fourth inning and the Waves threatened to plate more with the bases loaded and two outs, but Amral and her variety of filthy pitches, struck out lead off hitter Ella Bolano to retire the side.

Mt. Hope ace Reily Amaral threw her first no hitter of the season as the Huskies beat Westerly 8-0 on Thursday. Amaral fanned 18 Westerly batters and struck out the side in the first, second, third, fifth and sixth innings. She allowed just one walk in seven innings of work.

Three hitter Jayda Sylvia led the Huskies offensive attack with a triple and three RBI. Lead off hitter Ella White reached base four times and crossed the plate four times via two hits, a walk and an error.

The Huskies plated four more in the third inning. White led off with a walk. Crowell reached base via an error and Sylvia slammed a triple into right centerfield to score two and give Mt. Hope a 3-0 lead. Westerly pitcher Lilly Vetelino hit Logan Levesque with one out. Sylvia scored and Levesque went to second base when Levelito thew a wild pitch to Amaral who struck out for the second out. Julia Allen bashed a single to centerfield to plate Levesque to extend the lead to 5-0. Sammy Malafronte grounded out to end the inning.

The Huskies scored two more in the fourth. Anna Van Amberg reached base when the catcher dropped a third strike. White reached on an error to give Huskies runners at first and second and no outs. Both runners moved up on Crowell’s force out. Van Amberg scored on Sylvia’s force out and White scored on a Grace Stephenson double to left field to give Mt. Hope a 7-0 lead.