The Town of Warren and Pokanoket Tribe, which held dominion over what is now Warren for thousands of years prior to the arrival of colonists, have entered into what could be a first in New England … 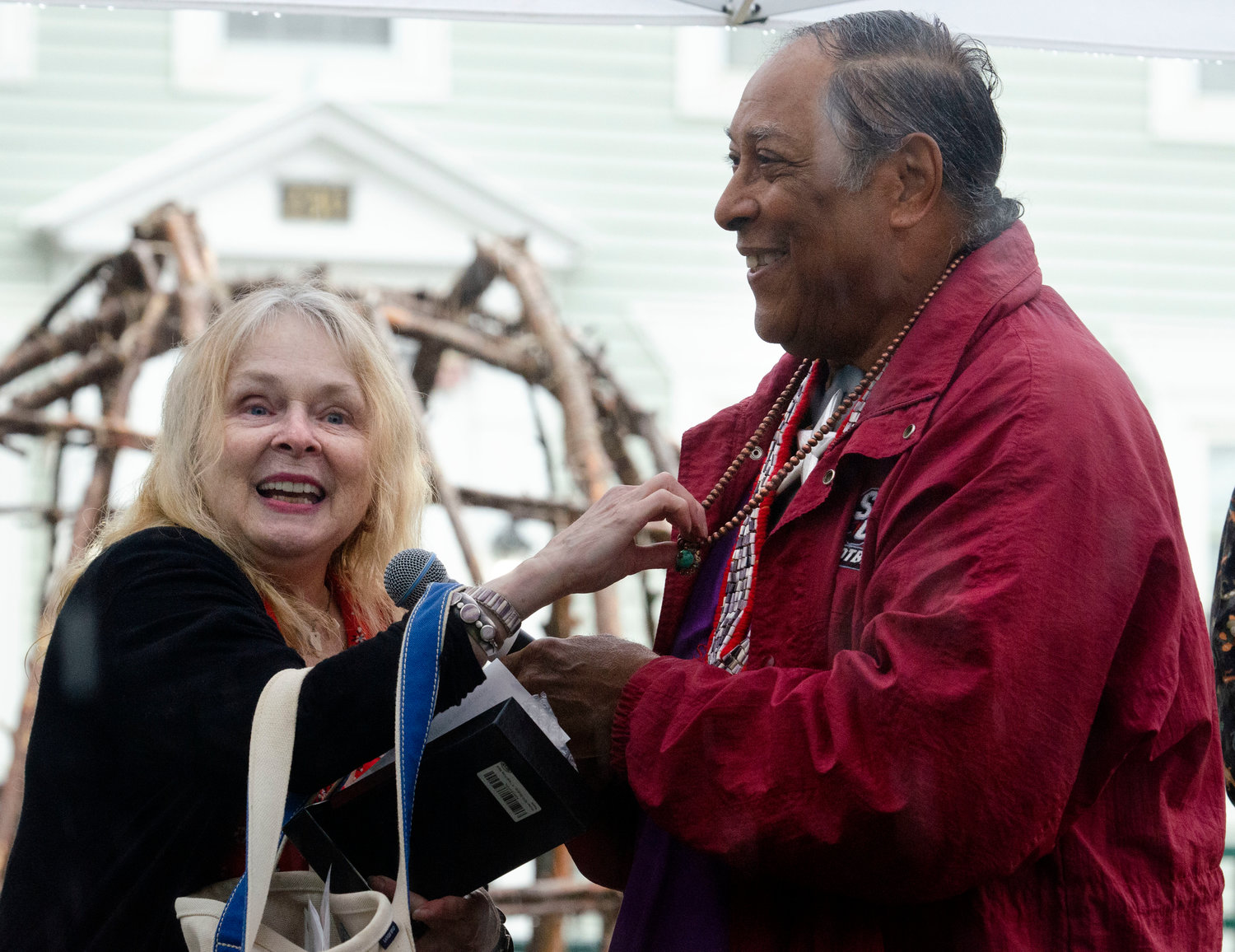 Willam Winds of Thunder Guy, sagamore of the Pokanokets, is given a gift at a recent meeting at Massasoit Spring.
Richard W. Dionne Jr.
Posted Wednesday, July 21, 2021 11:04 am
By Ted Hayes

The Town of Warren and Pokanoket Tribe, which held dominion over what is now Warren for thousands of years prior to the arrival of colonists, have entered into what could be a first in New England history — an official acknowledgement of the the tribe's long history here.

At their July 13 meeting, members of the Warren Town Council voted unanimously to pass a land acknowledgement document which declares the town's recognition of its indigenous origins.

"It seemed like the next appropriate step in all the work that we've been doing towards identifying and acknowledging our history, and clarifying it and being respectful of all that it means," the council's president, Keri Cronin, said.

"There is a long history here that we should recognize."

William Winds of Thunder Guy, the Pokanokets' sagamore, said Monday that he is thrilled to have an official acknowledgement of his peoples' long history here. It is a wonderful sign of respect and cooperation, he said.

"We're finally getting our due after all this time," he said. "We've always tried to be good neighbors, no matter what. It's fantastic that (the town) recognized us after all these years. There have been a lot of revisionists who have tried to re-write history, so for these people to come out and acknowledge the tribe, it feels good. We're very pleased."

The acknowledgement grew out of meetings held by the town's newly-formed American Indian Study Committee, and was approved by the Pokanoket tribal council.

Now collectively known as the East Bay, the ancestral lands of the Pokanoket were once known as Sowams. In the early 1620s, there were some 8,000 tribe members here, Winds of Thunder said. Though later years brought much hardship and loss to the Pokanoket people, colonists first entered into their first partnership with the colonists 400 years ago this month, when Plymouth Colony ambassadors Stephen Hopkins and Edward Winslow walked to Sowams, probably within a few yards of today's Water Street, to meet with Ousamequin, the Pokanokets' Massasoit. They agreed to work cooperatively, trade and share knowledge and goods, and the friendship lasted 40 years, until Ousamequin's death in 1661.

In recent years, town officials have sought to strengthen their relationship with Pokanoket tribal leaders, and the study committee grew out of that. Other steps to better honor and recognize the Pokanokets here have also been taken: Warren just installed a new interpretive marker near the Massasoit Spring at the foot of Baker Street, have updated the Sense of Pride unit for school children to reflect the town’s Pokanoket origins more accurately, and has worked with the Warren Athletic Hall of Fame to reinterpret the use, prior to 1993, of a Native American mascot.

Next month, the town will issue a Proclamation of the International Day of the World’s Indigenous Peoples, which will be observed Sunday, August 8. That day, the public will be invited by the Pokanoket Nation to an event at Burr’s Hill Park, the site of Ousamequin’s burial, to teach residents about the past and present of the Pokanoket People. It will be free and open to all.

"Welcome to Sowams, the ancestral home of the Pokanoket people for ten thousand (10,000) years prior to settler colonization. We pay tribute to the tribal elders and people of this community who served and continue to serve as stewards of the lands and waterways of Rhode Island and Massachusetts. We recognize the unique and enduring relationship that exists between Indigenous People and their traditional territories. We acknowledge that our community was a part of the larger ancestral homeland of the Pokanoket Nation. Let this acknowledgement serve as a reminder of our ongoing efforts to recognize, honor, reconcile and partner with the Pokanoket people for the benefit of the lands and water of Sowams.