The Town of Warren came out to celebrate the first annual Pokanoket Heritage Day, where members of the tribe put on a show of traditional drumming, singing and dancing. 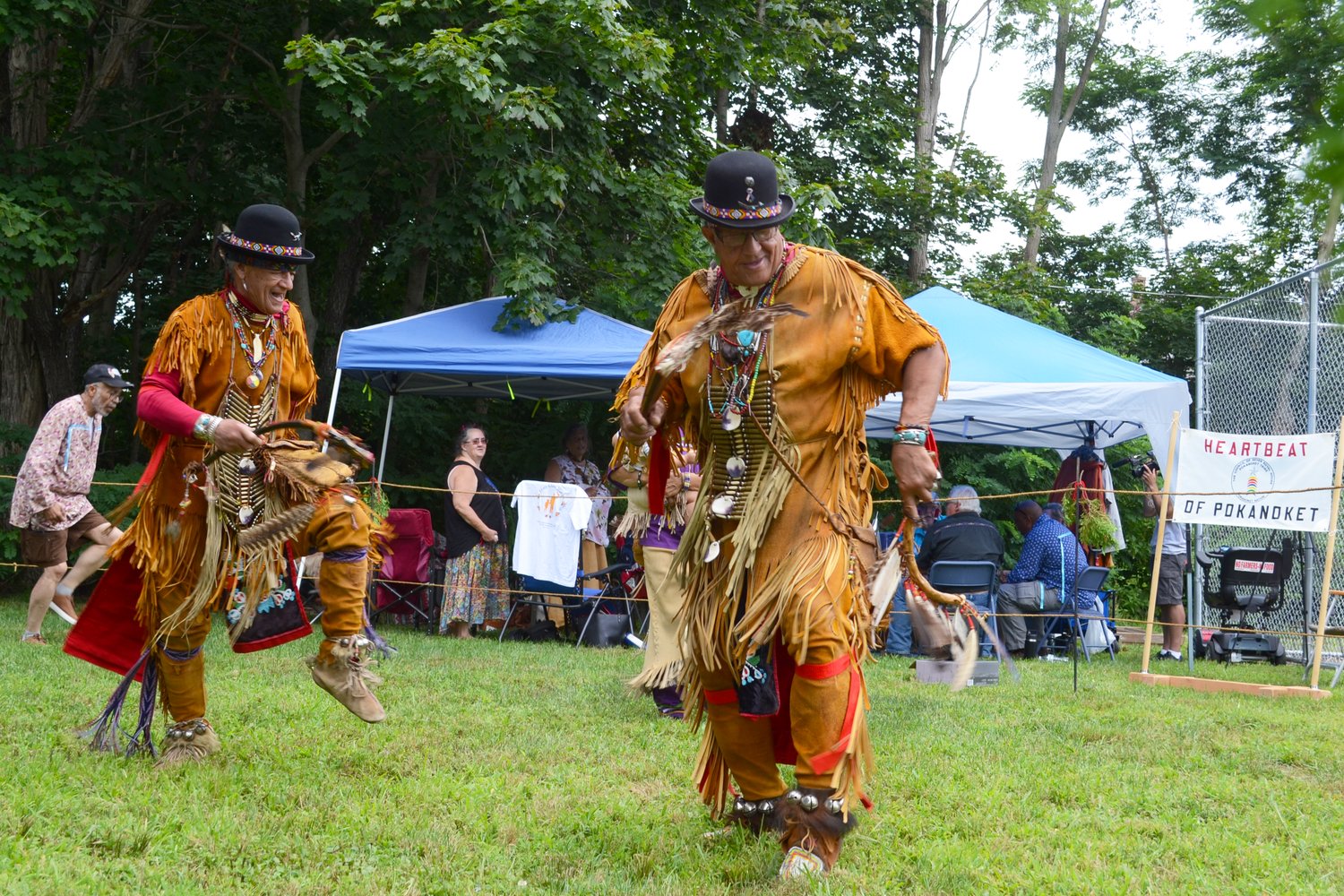 Lee Braveheart Edmonds and Harry Hawk Edmonds, brothers within the Pokanoket Tribe, put on an electrifying show of traditional dancing to begin the Pokanoket Heritage Day on Sunday at Burr’s Hill Park in Warren.
Photo by Ethan Hartley 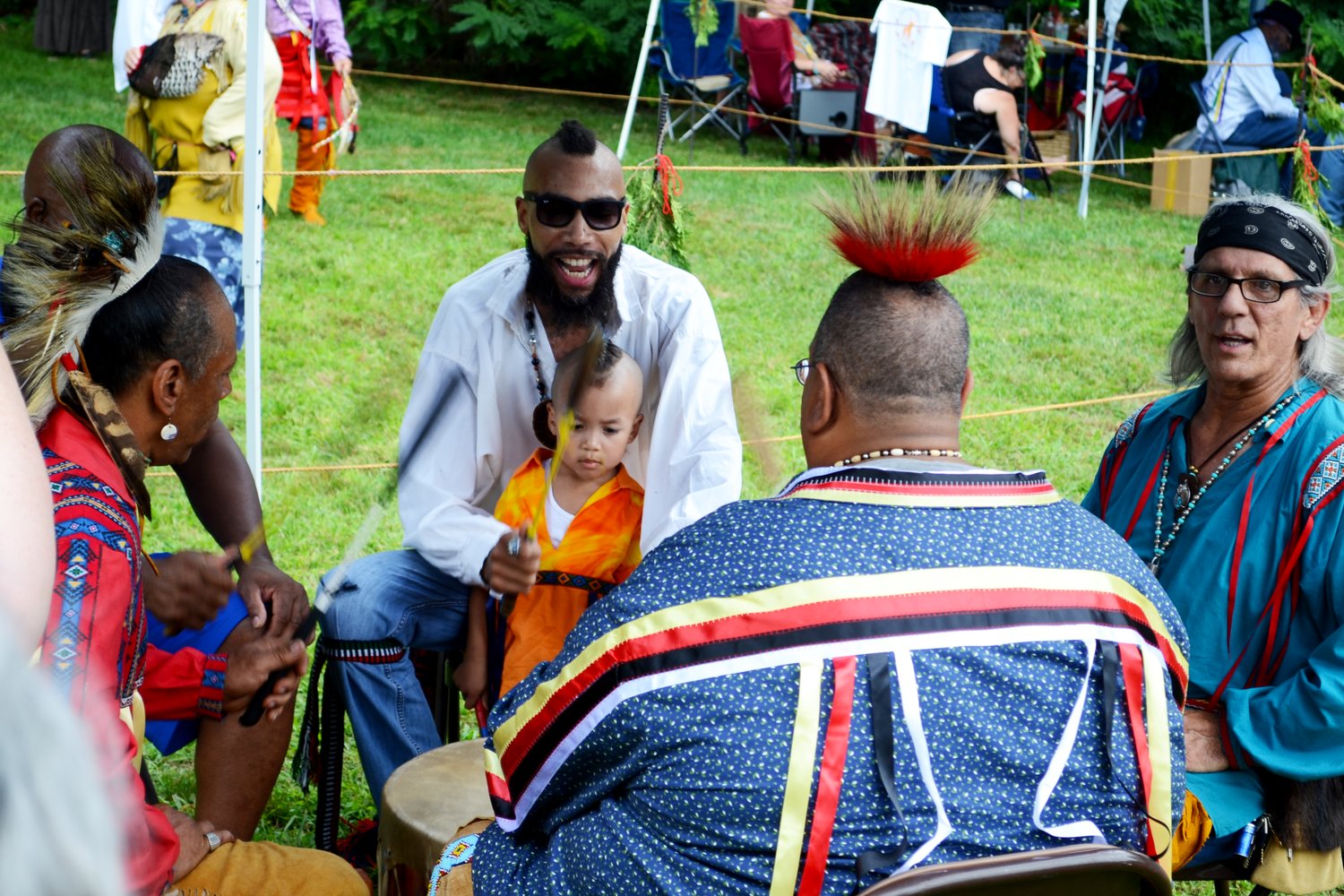 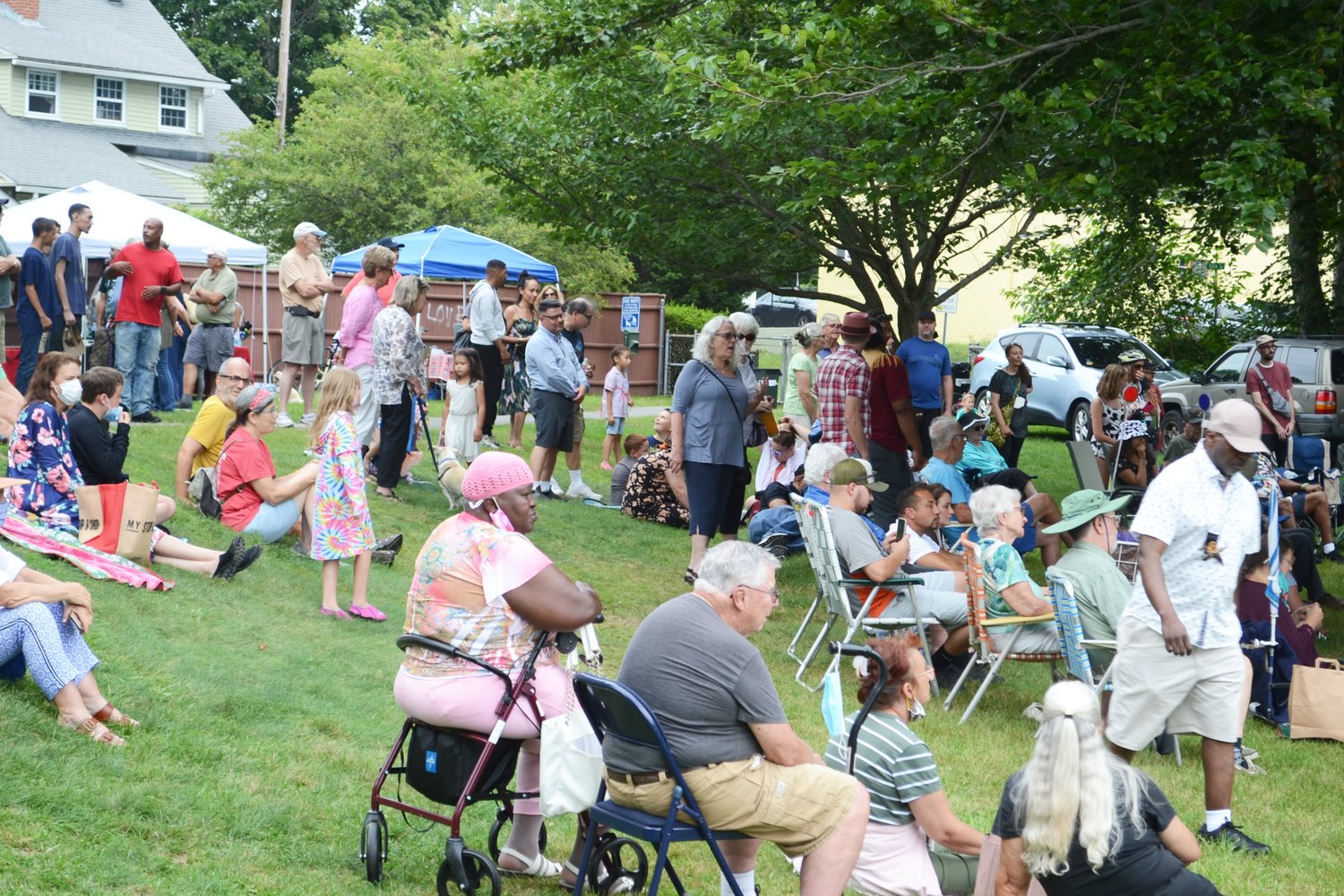 A crowd of 250 to 300 people gathered at Burr’s Hill in Warren to witness the Pokanoket Heritage Day ceremony.
Photo by Ethan Hartley
Previous Next
Posted Wednesday, August 11, 2021 11:24 am

We’ve been invisible or treated like we’re invisible for so many years. But we’re still here.”
Sunflower, member of the Pokanoket Tribal Council
By Ethan Hartley

Deborah Running Deer Afdasta, President of the Pokanoket Tribal Council, looked out upon a group of her fellow tribe members dancing happily together while traditional drums and singing sounded nearby — all being observed by hundreds of enthralled, mostly white onlookers — and reflected thoughtfully about her past.

It is a past that includes incidents of being beaten up as a child in the 1950s when she let it slip that she was a Native American, and finding ways to celebrate her heritage and deep connection to the Earth in more hidden, private ways. Still, she said, the cultural pride was always strong in her family.

“We’ve always known we were Pokanoket our whole lives,” she said. “My grandmother always told me, ‘Never forget who you are.’”

On Sunday, during the first annual Pokanoket Heritage Day at Burr’s Hill Park in Warren — itself a ceremonial burial ground where the Massasoit Ousamequin, a native leader whose diplomatic actions are largely responsible for the survival of the early Plymouth colonists, now lays buried — members of the Pokanoket Tribe were able to remember and celebrate their culture and history in a way that hasn’t been possible in over 400 years. Cleansing smudging was offered to all gathered, there was a ceremonial prayer at the grave of Ousamequin, and traditional music filled the space that was also occupied by numerous vendors selling traditionally crafted goods.

As fellow Pokanoket Tribal Council member, Sunflower, pointed out, forgetting about their tribal heritage is not possible for many descendants of the tribe, as the very existence of the Pokanoket people was nearly wiped from existence and from the pages of history altogether.

An enduringly dark chapter of history

For nearly 10,000 years, the Pokanoket people inhabited the land they called Sowams — literally meaning “southern area”, which comprised the contemporary Rhode Island communities of Warren, Bristol, Barrington, and East Providence; as well as parts of Seekonk, Rehoboth, and Swansea, Mass.

Then, almost exactly four centuries ago, the Pilgrims arrived in the so-called New World with lofty ideals of religious freedom and a new beginning for their own people. Ironically enough, considering what would happen a few decades later, they found their greatest ally not from across the sea in England, but in the local native population, which taught them traditional methods of harvesting and survival that enabled them to persist. An unlikely and unprecedented treaty developed between the colonists and the native population, led by Ousamequin, which was described by Dr. David Weed, Coordinator of the Sowams Heritage Area Project, as “strategically friendly.”

“This area is rich in history,” said Dr. William Winds of Thunder Guy, Sagamore (chief of chiefs) of the tribe, whose native name is Po Wauipi Neimpaug. “This is where it all began.”

That is especially true for Rhode Islanders, who may or may not know that the state’s founder, Roger Williams, was also documented as being kept alive during the harsh winter following his exiling in from Massachusetts Bay Colony in 1636 thanks to the assistance of the Pokanoket people.

But as the first generation of settlers passed and leaders who were friendly with the Pokanokets moved elsewhere, things changed rapidly. The subsequent success and growth of the English settlements, combined with crumbling relationships between the native populations, became the definition of a zero-sum game that heavily favored the group of people with superior weaponry — which resulted in what Dr. Weed described as one of the first genocides in North America.

“If the English didn’t kill them (the Pokanokets) outright, they enslaved them in Barbados,” he said, describing the events and aftermath of the King Phillip’s War, which took place from 1675 to 1678 and was one of the bloodiest conflicts in Colonial American history. “They weren’t allowed to speak their language or call themselves Pokanoket. This was the second genocide in America, and it happened right here. They almost succeeded in wiping them out.”

For the next 200 years, the surviving members of the tribe who were able to escape or survive by hiding or changing their outward identity concealed their true heritage from public view to escape persecution and death. And it wouldn’t be until the last couple of decades, still, that Pokanoket descendants would begin proudly self-identifying as such.

Moving towards a brighter future

Snap forward all the way to present day, and the Town of Warren made headlines when it agreed to honor the historical significance of the Pokanoket people through a land acknowledgment ceremony this past July — the first of its kind in the New England region.

“Let this acknowledgement serve as a reminder of our ongoing efforts to recognize, honor, reconcile and partner with the Pokanoket people for the benefit of the lands and water of Sowams,” the proclamation reads.

On Sunday, which is also recognized as the International Day of the World’s Indigenous Peoples, Town Council President Keri Cronin re-read the proclamation for the attendees gathered.

“This is just the beginning. There’s so much more to do on so many levels,” Ms. Cronin said following the reading of the proclamation. “I feel really small compared to the enormity of it all, and I recognize that. I look around at the generations of people here, and they’ve been so welcoming. It feels so nice to be a part of this.”

The feeling of hope and cathartic relief was palpable throughout the attendees and the celebration. At one point, a hawk could be seen circling overhead, which drew the attention of an elated Winds of Thunder, who quickly grabbed the attention of one of the dancing tribe members — the appropriately-named Harry Hawk Edmonds.

“I hope this is the start of many things to come. Hopefully this will grow into an event recognized all over the region, but especially here in Warren,” Winds of Thunder said. “We hope this grows into something huge. We are so pleased to see it. It’ll catapult this into another dimension I hope.”