Clutching a copy of Nathaniel Philbrick’s “Mayflower” in his hands, Sagamore William Guy of the Pokanokets looked out at the Warren River Monday afternoon. The sun wouldn’t … 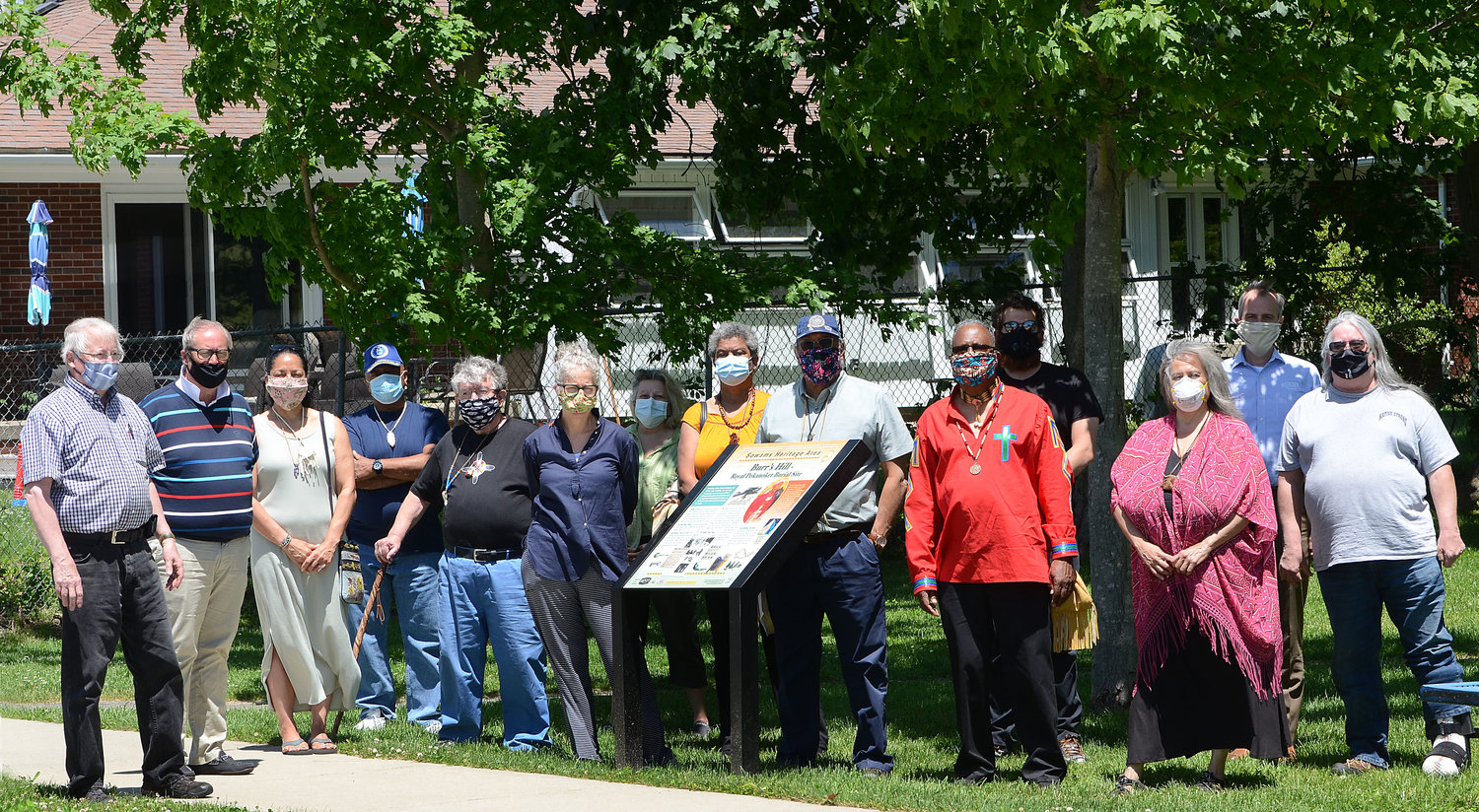 Clutching a copy of Nathaniel Philbrick’s “Mayflower” in his hands, Sagamore William Guy of the Pokanokets looked out at the Warren River Monday afternoon. The sun wouldn’t set for another seven hours, but as he stood looking out across the Warren Town Beach with Burr’s Hill at his back, Mr. Guy appeared to smile behind his brightly colored mask. Close to the last of his ancestors, who were once buried behind him facing west so their spirits could join that setting sun, it felt like being home:

For centuries, Burr’s Hill was the royal burying ground of the Pokanoket. But after its early history was all but forgotten in the 19th century, the land once revered as the Pokanokets’ sacred ground became, at times, a gravel quarry, a dumping ground and a fallow wreck. Around the turn of the 20th century, curious amateur archaeologists dug up many burials and thousands of artifacts from the site. Some made their way to the George Hail Library, others ended up in private collections, and others were destroyed and otherwise lost.

Though it is now a park, a concert venue, a series of basketball courts, a children’s camp and a staging area for a festival dedicated to clams and art, various efforts have been underway in recent years to recognize the area’s true significance and place in history.

Monday’s event, which drew Mr. Guy and dozens of other Pokanokets, town officials and a benefactor, was the first unveiling of a large new interpretive sign that explains to the curious what the hill means not just to Native Americans, but how it fits into the East Bay’s larger history as well.

The sign is the first installed by the Sowams Heritage Area, a project organized by Warren historian David Weed, and he hopes it will eventually be just one in a region-wide network of historical plaques and signs that detail the area’s rich early history. He has plans and locations for others, and is excited to see the work progress.

“There are so many” significant places in the area, he said. From Bristol to Barrington, East Providence and Swansea, the marks left by the Pokanokets and early settlers aren’t always easy to find, and it’s the Heritage Area’s goal to bring them to light.

Mr. Weed has spent the last 15 years researching sites and the area’s early colonial years. He said Barrington historian Helen Tjader first mentioned to him the potential of establishing a heritage area about two or three years ago, and he believes that her idea has the potential not just to give the public a greater understanding of Pokanoket and colonial history, but can also be a boon, bringing increased tourism to the area. The 10-year plan is to create a national heritage area here, much like the Blackstone Valley Heritage Corridor.

“Every town has something,” he said. “But there’s no unity. That’s what heritage areas do; they take a lot of small things and pull them together to gather and begin to promote them.”

The Burr’s Hill sign was a true community effort. Designed by Warren artist Karen Dionne, it was paid for with a donation from Todd Blount of Blount Fine Foods and installed with little fanfare last month by the DPW. Mr. Weed had hoped to unveil it in a large ceremony, but Covid-19 restrictions forced a smaller event. He hopes to hold another in the coming months, when it is possible for more people to congregate.

In the meantime, he has plans to install more signs throughout the region and has a list of about nine sites in the region on which he’ll focus for now. The next will be in front of the Congregational Church in Bristol, he said, and others will go in in other towns. He is also looking for sponsors to help fund future signs, and he hopes businesses will take part. The signs will be coupled with a website, brochures and other information, in hopes of telling a cohesive story of the area’s significant points.

“There’s a long way to go but I’ve done everything I can do to get the public involved, between brochures and talks and markers. It’s about attracting people who have an interest in this particular subject. There’s so much history here.”