A painting recently commissioned by the Warren Preservation Society shows Warren in a new, old light — how it might have looked in the time of the Pokanokets.

The painting, which depicts … 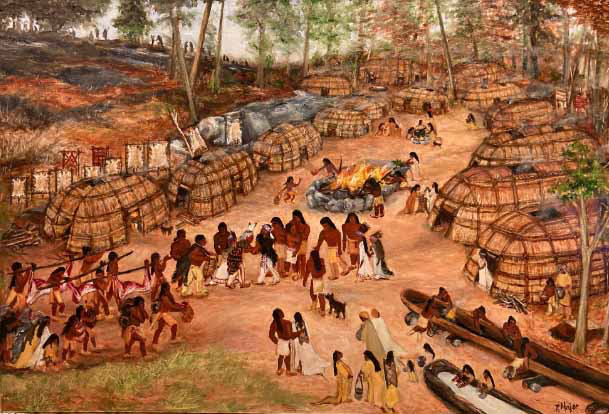 A painting recently commissioned by the Warren Preservation Society shows Warren in a new, old light — how it might have looked in the time of the Pokanokets.

The painting, which depicts Massasoit Ousamequin's village of Sowams, was painted by Martha's Vineyard artist Ruth Major, whose work also hangs in the George Hail Library. If you're curious, you can see it in the window of Inkfish Books at 488 Main St.

Massasoit Ousamequin, who met the Pilgrims in 1621, is known to have made the present-day Warren his home, but there are no known illustrations of his home settlement, which was called “Sowams."

A number of paintings have attempted to depict the Massasoit’s first meeting with Pilgrim Governor Carver in Plymouth and other encounters between the colonists and the Pokanokets, but none exist of Sowams itself. However, there is rich historic evidence of what it might have looked like, gleaned from maps of the period and accounts that have survived.

“What’s missing is an illustration of a settlement that is described in the literature of the time and is referenced on the frieze on the front of the Warren Town Hall with the label ‘Sowams, 1621,’” Sowams Heritage Area Project Director David Weed said.

“Ms. Major always researches her paintings to ensure their historical accuracy. By including important details in each painting, she tells the story of each character in a way that other illustrations often fail to do. It is this attention to historical detail that distinguishes Ms. Major’s work and the reason why she was chosen for this project."

The painting was made possible through a grant given to the preservation society last year by Jay Barry Cultural Arts and the Idalia C. Whitcomb Charitable Trust. Last Tuesday, local historians, Pokanoket representatives and Ms. Major gathered at Inkfish to unveil the new painting.