Location, not the type of housing, is at the center of criticism

Over 15 residents spoke in opposition to a proposed four-story, 17-unit affordable housing development that would be located at 119 Water St. and would require nine zoning variances.

Location, not the type of housing, is at the center of criticism 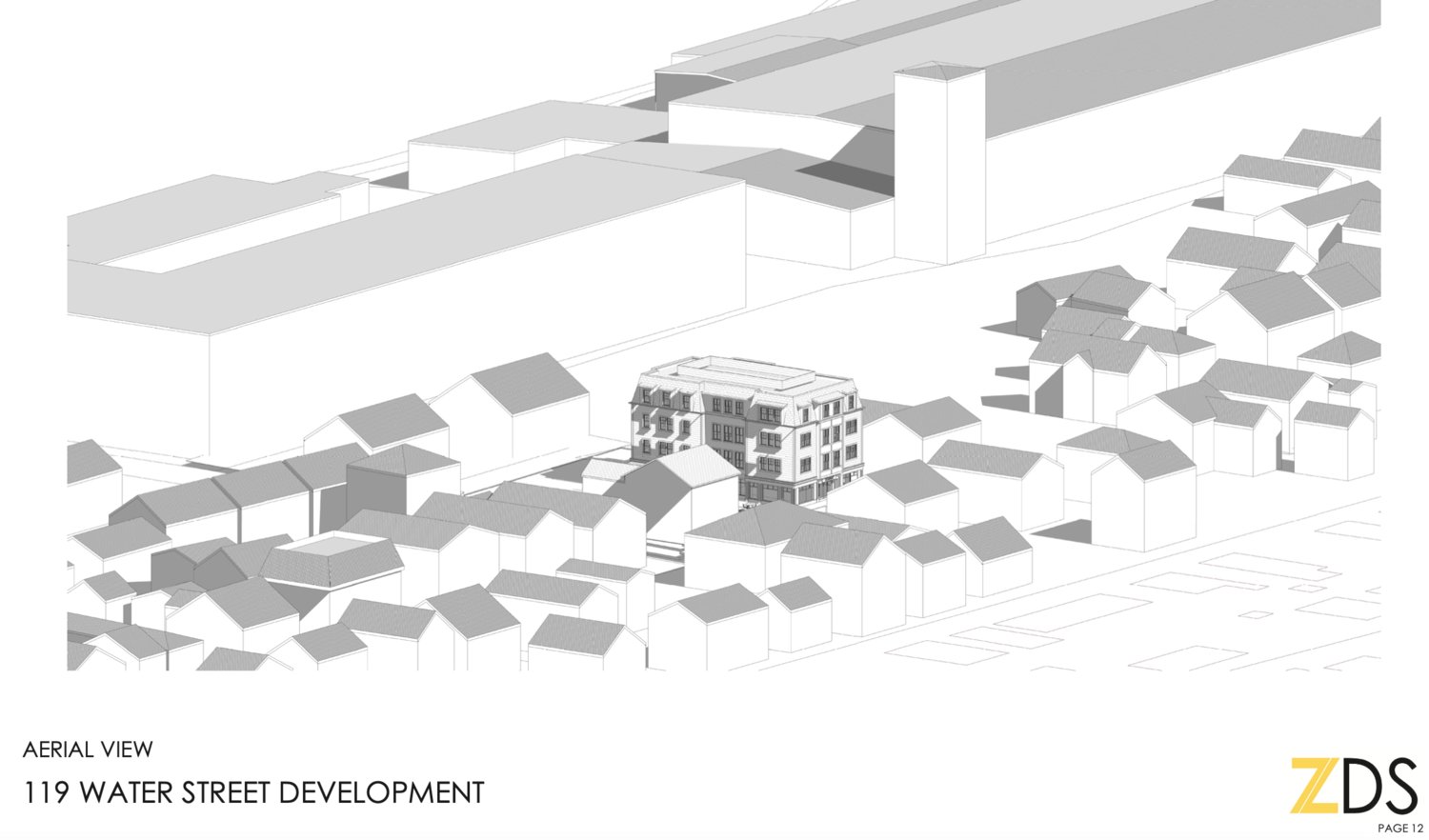 An aerial view depicts how the building would appear compared to surrounding structures. The Tourister Mill is the large complex at the back.
ZDS Inc. 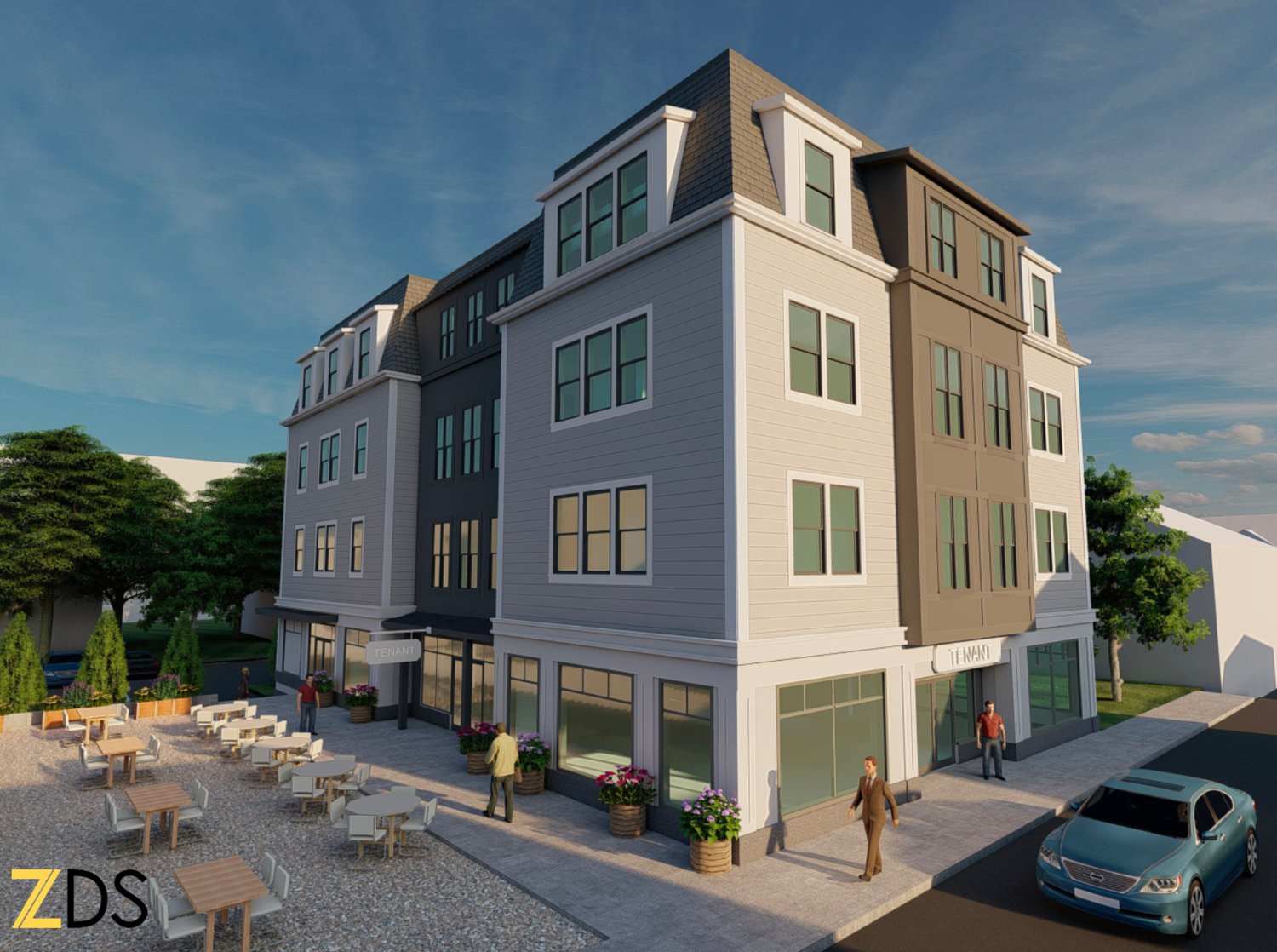 A conceptual rendering from ZDS Inc. shows the vision for the development. The outdoor dining area seen in the image would be for The Waterdog restaurant, located next door and owned by Daniel Teodoro, the developer of the proposed apartment building.
ZDS Inc. 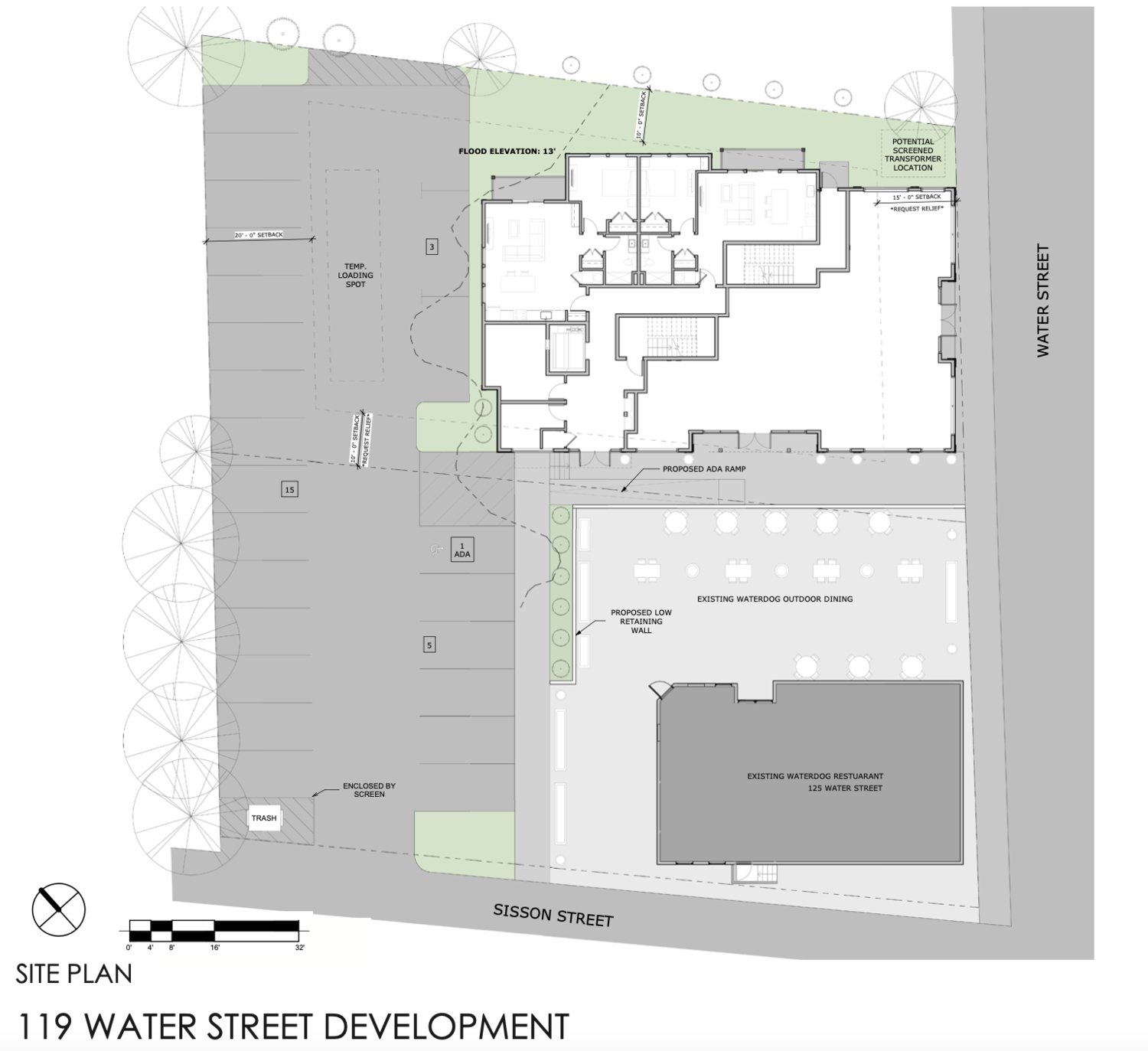 A site plan shows how the existing space behind the Waterdog would be utilized to create a parking lot for the development. However, the number of spaces would still fall well short of Town zoning requirements. 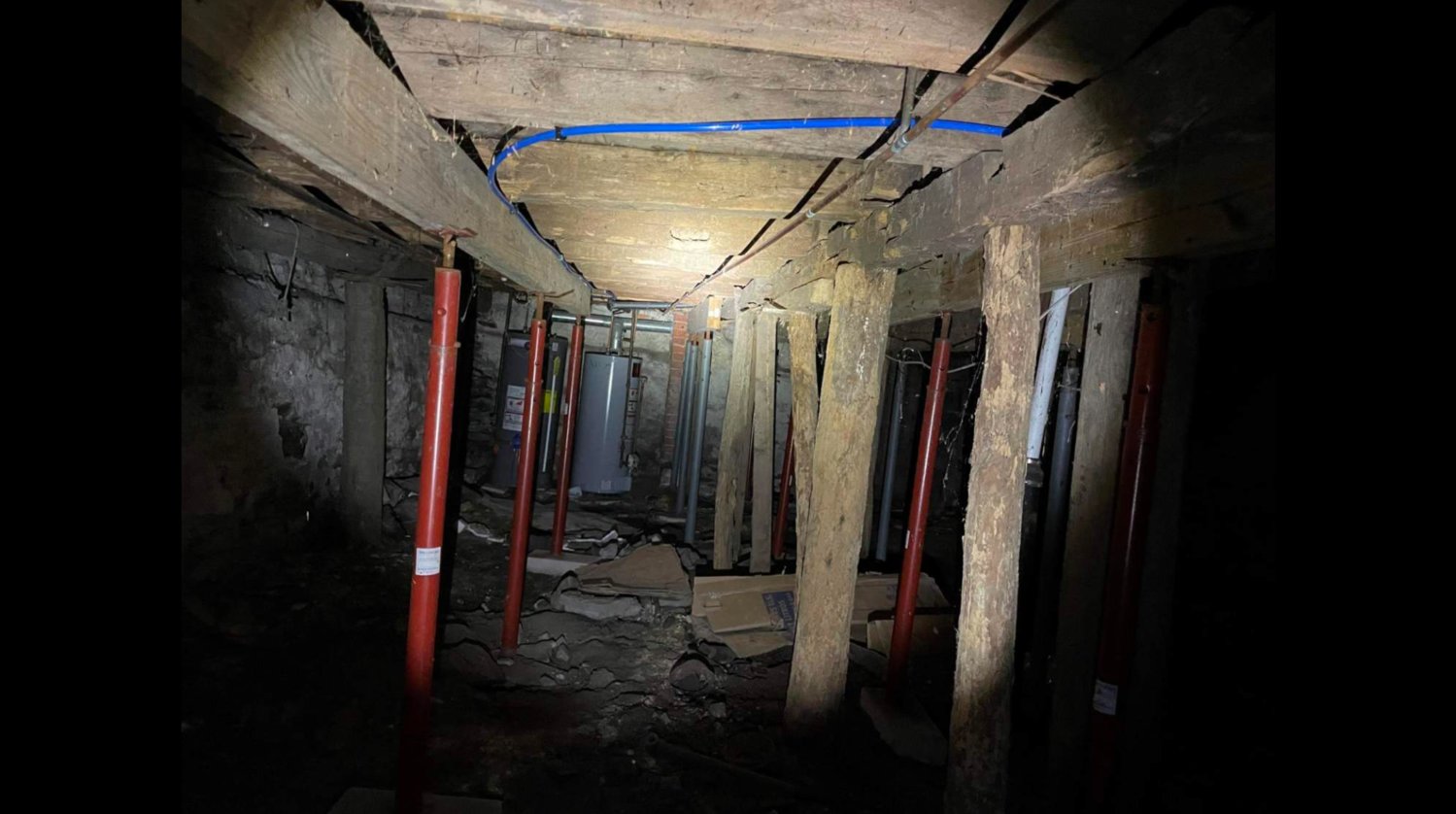 A building evaluation report shows the unsafe conditions within the existing historic structure at 119 Water St. The building, as proposed in the plan, would be demolished. 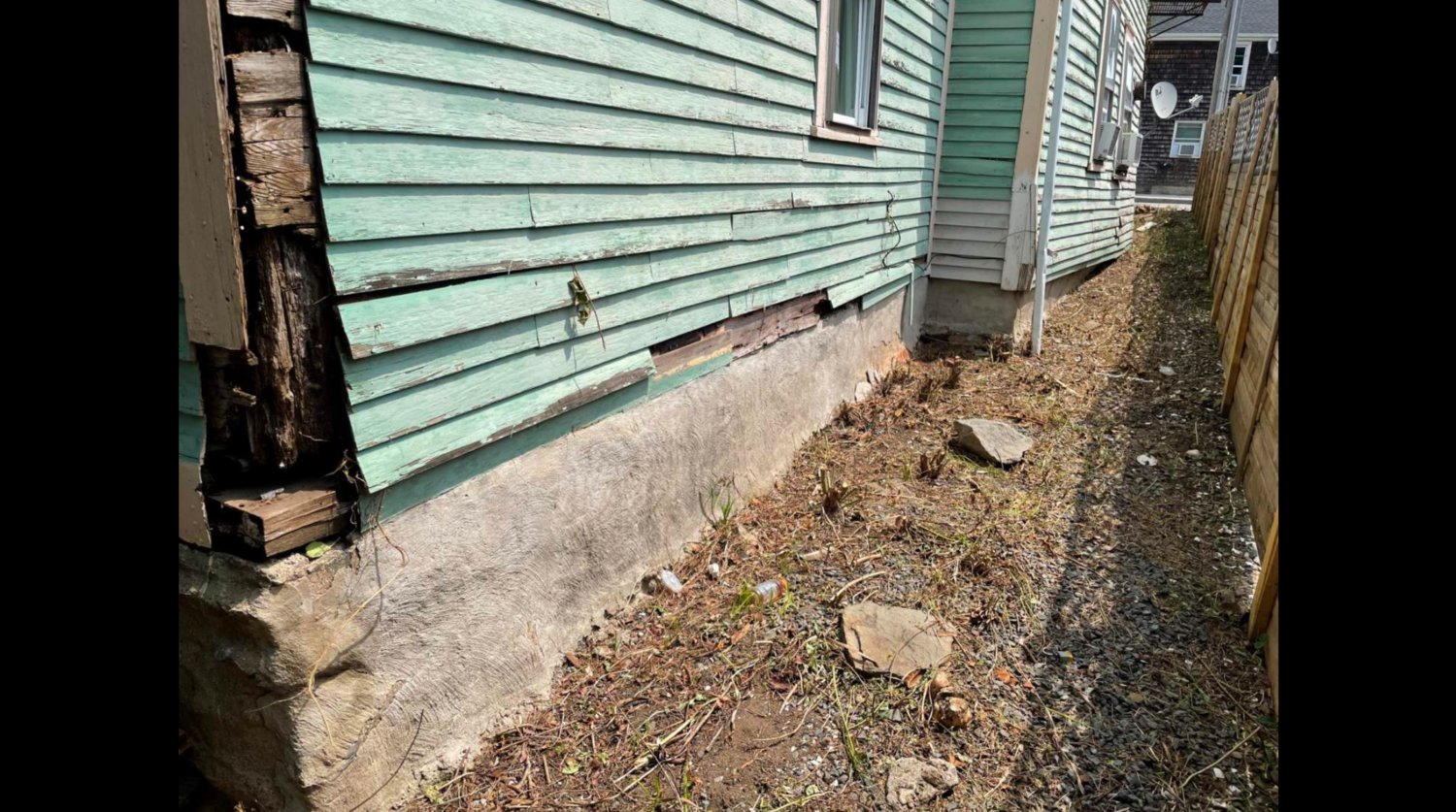 A building evaluation report shows the unsafe conditions within the existing historic structure at 119 Water St. The building, as proposed in the plan, would be demolished.

A list of variances on zoning requirements that would be required to approve the development.
Previous Next
Posted Tuesday, October 4, 2022 3:09 pm
By Ethan Hartley

A public hearing held by the Warren Planning Board Monday night to discuss a 17-unit housing development proposed to be built at 119 Water St. — where 15 of the units would be designated as “affordable” — revealed one thing for certain: residents in the area are not in favor of it, and there is a long road ahead for the board leading to a difficult decision on whether or not to approve it.

The reasons given by many of the more than 15 residents who spoke up in opposition to the project did not stem from a distaste of affordable housing — in fact, many testified they were in favor of such projects — but rather out of concern that the development would necessitate the destruction of a historic (though in very severe disrepair) building, exacerbate traffic and parking issues throughout the area, and that the building would far exceed the height and size of any other structure along Water Street.

“I fully want to see affordable, or mixed housing, whatever you want to call it. I want the teachers and the firemen and the policemen to live in this town. I want people who grew up in this town to be able to live in this town. All of those things,” said Campbell Street resident Leslie Hartwell. “It just doesn’t seem to be the right fit. And not to be cynical and not to point fingers because I don’t know the finances of the whole thing, but this is all at the expense of Water Street for the benefit of whoever is doing this.”

The developer expressed a different belief during their presentation to the board.

“This is a good project,” said Bret Jedele, partner at Chace Ruttenberg & Freedman, LLP, of Providence, representing the developer. “It checks a number of boxes. It advances the town’s comprehensive plan, it advances the mission of the town’s affordable housing guidelines and it will revitalize the property with a robust presence that will add to the already existing character of Water Street and that neighborhood.”

About the development
The proposed four-story, 17-unit apartment building would be constructed at 119 Water St., next to the existing Waterdog restaurant, which is located on the neighboring parcel at 125 Water St.

The developer is Danny Teodoro, owner of the Waterdog. Teodoro was not present at the Monday night meeting due to a prior family obligation, combined with the meeting being pushed off a week due to a technical glitch that occurred last Monday, which he was prepared to attend.

A glance at the documents sent to the planning board revealed that the development would comprise around 17,605 gross square feet split among four stories (each around 4,500 square feet), with 17 rental units (15 one-bedroom apartments and two, two-bedroom apartments). A commercial space on the ground floor with frontage along Water Street is proposed at 1,834 square feet.

The development would require variances for both front and side setbacks. It proposes no (zero feet) setback for the front, when zoning requires 15 feet, and only 4.2 feet for side yard setback when zoning calls for at least 10 feet.

The design indicates that Teodoro would convert the rear portion of his existing parcel at 125 Water St. into part of the parking lot for the new development. Renderings from ZDS Inc., an architectural firm out of Providence, show a harmonious blend of space between the new development and the Waterdog, where the restaurant’s outdoor patio sits directly next to a concrete sidewalk for the apartment building.

Parking was the primary concern of many resident who spoke in opposition to the project, including Joseph Gilberti, a Sisson Street resident who spoke of the already crowded situation that results from the popularity of the Waterdog. He mentioned how people already park in residential driveways or along the street to pick up takeout, and how delivery trucks will block traffic on Water Street to make deliveries.

Gilberti pointed out the design of the parking lot behind the proposed development, which would absorb the existing Waterdog parking lot and, in effect, actually take away spaces from the area that is already overloaded with cars.

“No one has mentioned that the lot behind the Waterdog has 12 spaces designed for the Waterdog…Those spaces will be re-allocated for the development,” he said. “I’m not against the development of Water Street. I think it’s good. I just think that real consideration needs to be taken to the practical implications of trying to force this much traffic down Sisson Street to that parking lot that is already insufficient for what’s there.”

Historic preservation concerns
In order to build the development, two structures would need to be razed — a smaller building at 113 Water St. and the existing mixed-use building at 119 Water St., which currently houses the Beleza Shoppe clothing boutique, and is listed by tax assessor records as being built in 1850.

The developer, through its attorney, Bret Jedele, and its design and engineering team representatives, Julie Bartlett, architect from ZDS Inc., and engineer Joe Casali, presented their case that salvaging the existing building at 119 Water St. was not feasible.

“The foundations are in poor conditions, the walls are bowing, there is rot in the exterior walls and the foundation in particular needs significant repair to restructure this to make it safe,” Bartlett said. “The building and fire departments have both been in this building and have only deemed two of the units that are currently in the building to be livable for a period of time, which will be re-evaluated.”

A report submitted to the board indicated it would cost an estimated $931,700 to make the necessary structural fixes to the existing building.

For those dedicated to the preservation of the town’s historic core, however, this is not a good enough reason to justify leveling the 170-year-old building.

“I think asking for the demolition of a building right on Water Street or in the district anywhere is an important issue that needs to be fleshed out,” said Eileen Collins, president of the board of the Warren Preservation Society, who said the group would be willing to pay for a preservation expert to study the building if granted permission to do so. “I don’t think that an engineer is the person who is going to be able to tell us whether or not this house can be restored.”

“We all know that people come to Water Street for the shops and the restaurants, because they’re set on a street that is old, and interesting, and sometimes odd,” said Patricia Mues, who restored an 18th-century historic home at 47 Broad St. “Look at Waterdog. I hope that part of its appeal for the owner was the fact that it’s a beautiful, 18th-century building. The same can be said for places up and down the street. Some newly renovated, others a little down in the heels, but all part of the fabric of Water Street, which has remained intact for hundreds of years…I think it’s only fair it be given a second chance before it’s relegated to the trash heap.”

Residents voiced concerns that the developer had asked for a waiver to acquiring a demolition permit for the existing structure, which would normally give a 30-day window for the town to perform their own objective engineering analysis, along with any other potential review as suggested by Collins and Mues. That waiver request was not approved or denied on Monday night.

State mandate puts Town in tough spot
The proposed development is being submitted through a comprehensive permit application on the basis that it will provide needed affordable housing units to Warren, which has well below the number of affordable housing units as mandated by the state (as of 2021, Warren has 213 units, or 4.23 percent of its housing stock, when the state mandates 10 percent be affordable).

As a result, the planning board is burdened with a higher bar to deny the proposed development than they would be otherwise. They would have to be able to demonstrate that the development as presented would cause an undue burden on the surrounding neighborhood that is greater than the town’s need for more affordable housing (the increase of which is a goal outlined in its comprehensive plan).

The same applies, said Town Planner Bob Rulli, for the parking concerns. Although Rulli has been vocal about parking issues being a major concern on Water Street — he recently convinced the Town Council to hire a consultant to generate an updated report on what could be done about it — that might not be enough to warrant denying the development, either.

“It’s a challenge to say that getting a relief on parking, is that going to severely impact the neighborhood when there’s already a parking problem?” he said. “That’s going to be a high bar to get over. Does the need for affordable housing trump all those other things?”

Rulli expressed frustration at how the state’s affordable housing mandate essentially forces the hand of local zoning and planning boards when considering these types of projects.

“People should talk to their elected officials. I don’t have the ability to change it,” he said. “It is very specific in terms of what the planning board needs to do, and it doesn’t taste good. But that’s the statute…These are the cards I’m dealt, and I get peoples’ frustrations about that too.”

The Planning Board will continue to deliberate on the issue next month. The developer has a long journey ahead as well, as they must acquire permits with DEM, CRMC, and local authorities to prove they won’t negatively impact the surrounding area, jeopardize its safety, or upset the environmental balance of the location.