Rhode Island's 2021 Principal of the Year recently learned that she does not currently have the support of a majority of the Bristol Warren School Committee to get a new contract this summer. 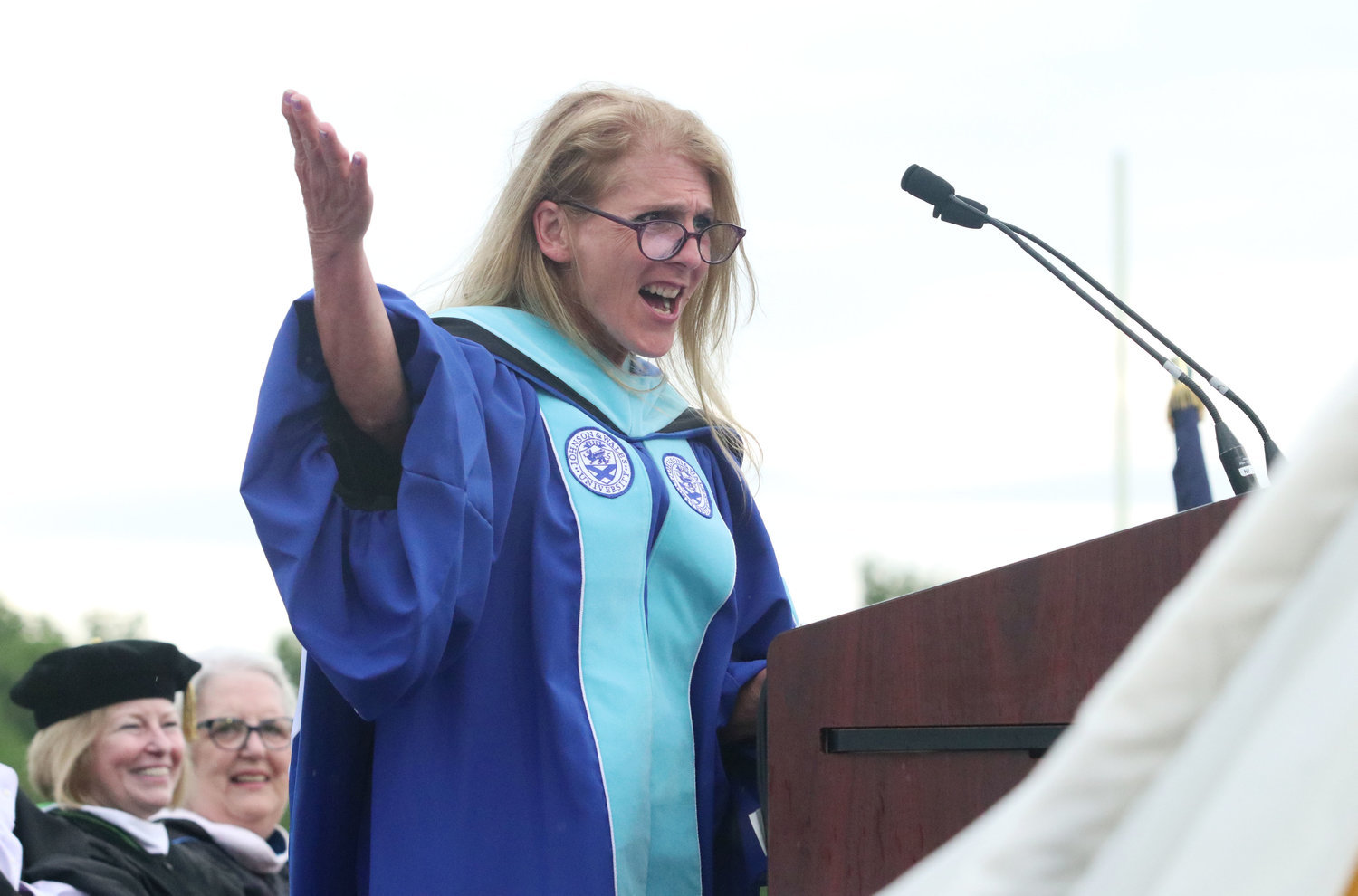 Principal Dr. Deborah DiBiase talks to the graduates of the Mt. Hope High School Class of 2021 last spring. “Dr. D,” as she’s commonly known, has been told that a majority of school committee members are not in favor of bringing her back next year. 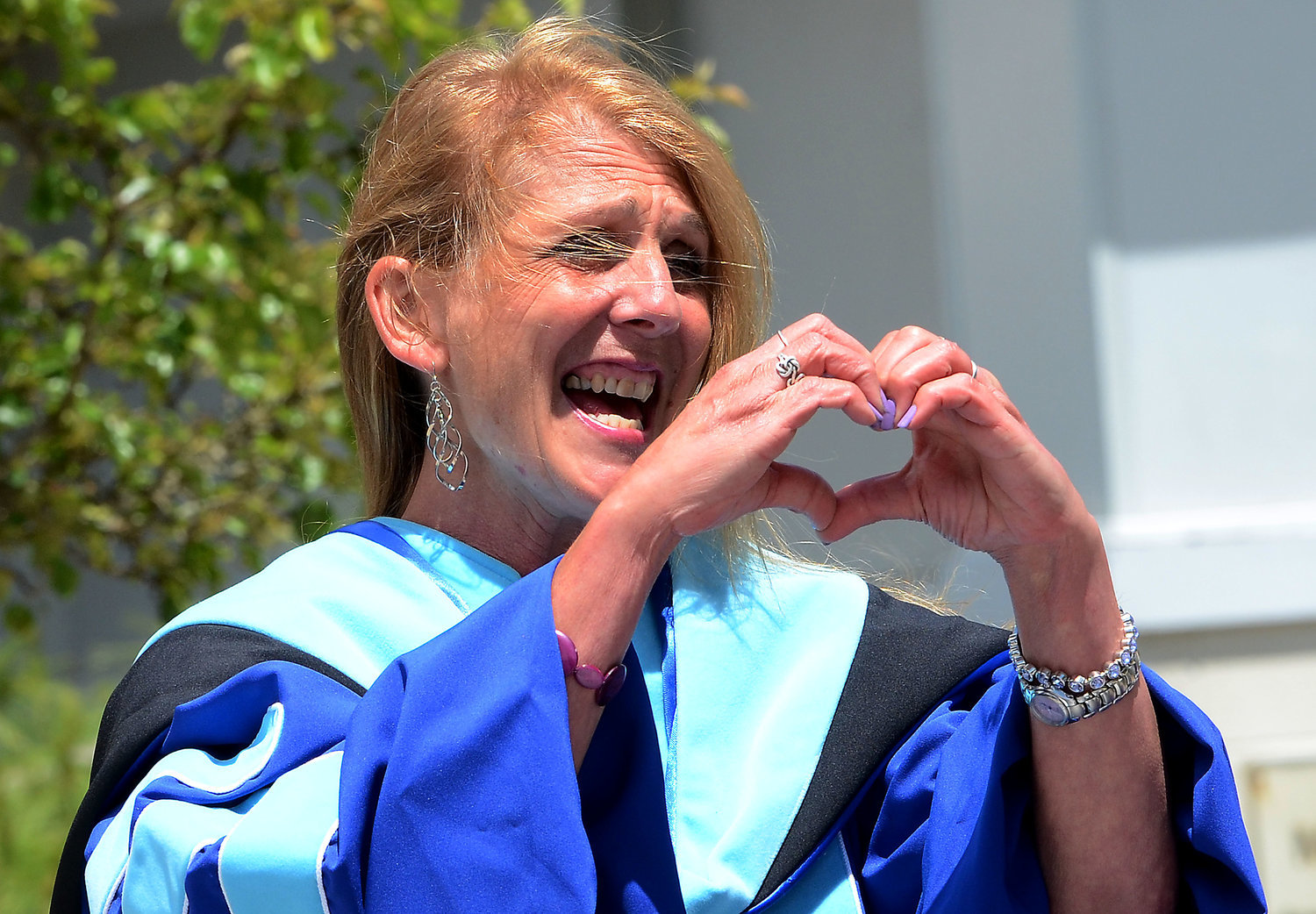 Dr. Deborah DiBiase, Mt. Hope High School principal, shows students how she feels about them during the pandemic-altered 2020 graduation, when she was not allowed to do her customary array of hugs, high-fives and selfies with the graduating seniors. 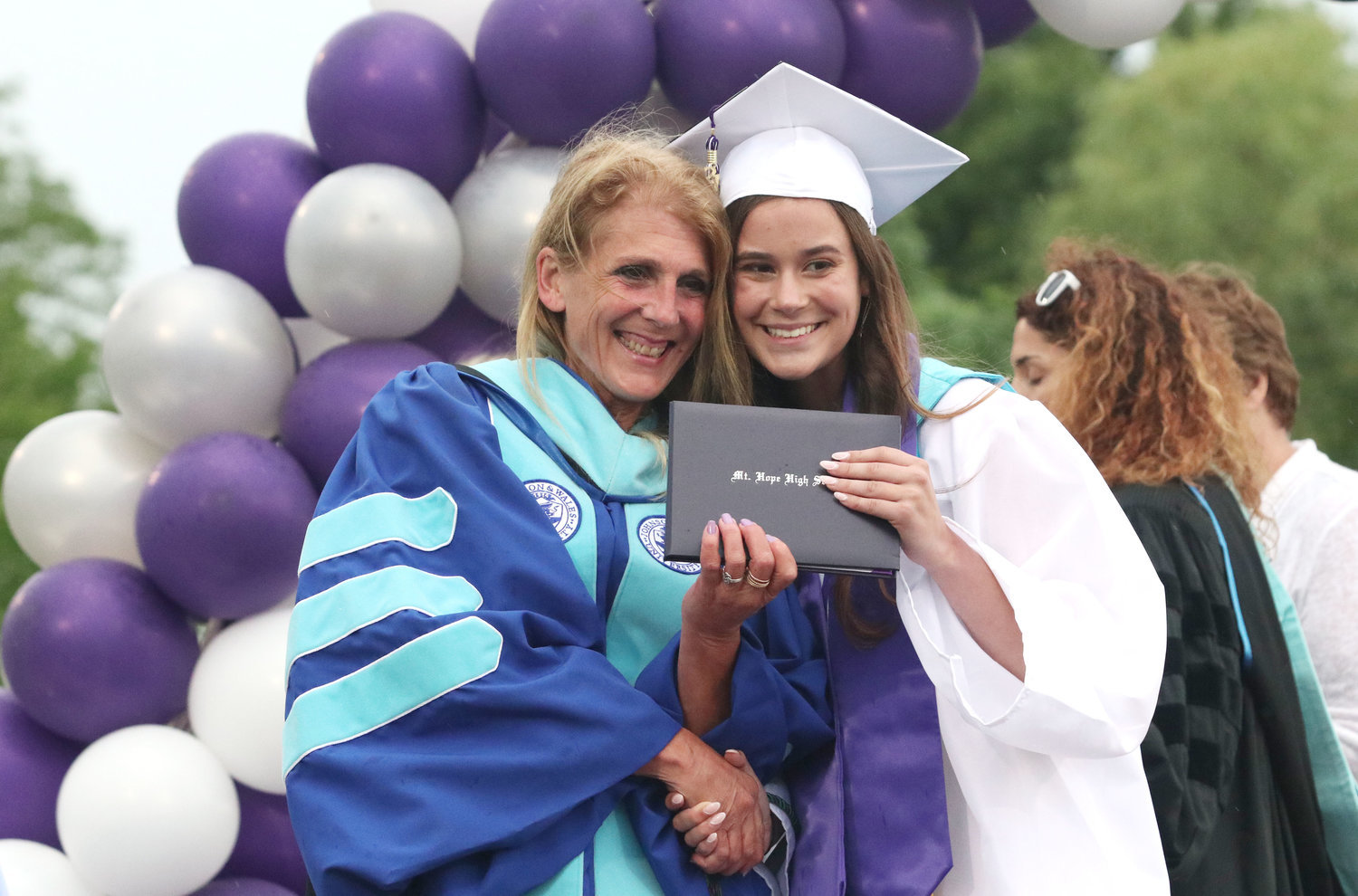 Principal Dr. Deborah DiBiase poses with a graduate of the Mt. Hope High School Class of 2021.
Previous Next
Posted Wednesday, May 25, 2022 7:00 am
By Ethan Hartley

Do you think Dr. DiBiase should have her contract extended to remain principal of Mt. Hope High School? Take our poll.

Dr. Deborah DiBiase recently informed a gathering of her staff at Mt. Hope High School that she had learned a majority of the Bristol Warren School Committee are not in favor of renewing her contract.

On Monday afternoon and into the evening, a flurry of calls began coming in from parents to this newspaper.

“I was devastated,” said Nina Murphy, parent of a junior at Mt. Hope and another who recently graduated from the school. “I have the utmost respect for her, and I have seen her work tirelessly to advocate for all types of kids.”

“She put her blood, sweat and tears into that school, and I feel like other parents would agree. She never stops working. She loves that school so much,” said Marny Kindness, a teacher at Mt. Hope and a parent of a student who attends the school. “She always puts parents’ and students’ needs first … I don’t know how the school is going to survive if the committee makes this decision.”

Bristol resident Chuck Rozea, father of five, including one graduate from Mt. Hope, one current student at the school and one incoming freshman at Mt. Hope for next year, said his kids are not ones to mince words about school staff they find disagreeable.

“[DiBiase] is the one that, unanimously, my kids are always huge supporters of,” he said. “I want to believe the best intent out of all the school committee members, but I wonder what their real agendas are. Frankly, of all the constant churn in the district that we’ve had, she is one consistent supporting voice that is always there to advocate for what’s best for the kids.”

DiBiase personally confirmed on Tuesday morning what had been reported by various third-party sources the day before.

“I can confirm that I have been told that the school committee may not be in favor of renewing my contract, but until it goes to a vote in an official capacity we won’t know the outcome,” she said.

As of press deadline, no school committee member was willing to state they were against renewing DiBiase’s contract on the record. School committee chairperson Marjorie McBride and Superintendent Ana Riley both declined to comment.

“I cannot and will not comment on personnel,” said McBride.

“I'm sorry but I do not comment on personnel matters,” said Riley.

School Committee Vice Chairperson Tara Thibaudeau said that community members should reach out to her with thoughts on the matter.

“Unfortunately, I don't have any input to add at this time, but please provide my number (824-4623 or email tarathib6@gmail.com) for any member of the community that would like to provide feedback on any issue that affects the school district,” she wrote in an email.

Two members of the school committee came out in support of DiBiase.

“Dr. DiBiase is a tenacious advocate for all students at Mt. Hope,” said Carly Reich. “I respect her leadership. She continues to demonstrate that she cares deeply about achievement, learning and the social emotional well-being of the students under her care. I wholeheartedly endorse renewing her contract, as suggested by our superintendent, and very much believe that she should stay at Mt. Hope.”

“Would I support renewing a contract, recommended to us by our highly-qualified superintendent, for last year’s RI High School Principal of the Year?” said Erin Schofield. “Absolutely, no question. Dr. D is a collaborative leader with extensive knowledge and experience in curriculum and instruction, and most importantly, prioritizes and values our students. We’re lucky to have her.”

School committee member Nicky Piper said she couldn’t commit to how she would vote ahead of time prior to seeing the contractual recommendation from Riley, but also provided a glowing personal opinion of DiBiase.

“It is my opinion that Dr. DiBiase is an exceptional educator, leader, and an inspiration to all she works with. She is an incredible role model to our students, as she works tirelessly to be a voice for them all, and to set them up for success as citizens of the world...We are very lucky to have her,” Piper said. “I appreciate her focus on closing the achievement gap at our high school, and believe that under her leadership, our high school has the potential to come out of this pandemic stronger than ever.”

No clear explanation expressed
It has been confirmed through multiple sources that Superintendent Riley had intended to recommend providing one-year contracts for all the district’s principals in order to create a sort of trial run for each building leader, so that more informed long-term contractual decisions could be made going forward. The school committee was reportedly in favor of this measure for all principals, except for DiBiase.

However, no clear reason has thus emerged as to why that is, causing more frustration among parents who called to express their disappointment with the school committee.

“I was just floored. If you’re going to not renew a contract, I would think you need to have some kind of justification,” said Karen Zagorski, mother of two students who graduated from Mt. Hope. “I have not heard any complaints about Deb. She is a principal that is always with a student. She doesn’t sleep. She’s at sporting events, plays, club meetings, everything. She looks at all students, the ones who are college bound and doing well and especially the kids who aren’t always seen. I would say she’s particularly mindful of those students.”

“She is the best principal in the state as of last year,” said Zagorski’s partner, Michael Tamulaites, adding that their two sons have gone on to great college success and that DiBiase always provided encouragement to students. “If she is doing something that deserves this criticism of her, I would love to hear it. But I haven’t heard anything.”

Decision possibly coming next month
A formal decision on the contract may be made as soon as the June 13 meeting of the school committee, but it is not certain if there will be any opportunity for the public to weigh in on that decision beforehand.

Kirsten DiChiappari, another parent in support of Dr. DiBiase, emailed Superintendent Riley her thoughts and a tribute video that was made for DiBiase in 2021 to thank her for her leadership through the challenges of the pandemic and for her dedication to the district.

“I write to express my full-throated support of Dr. Deb DiBiase. There is no one with more passion, enthusiasm, and empathy, and both the high school and district are better because of her contributions. She has weathered considerable challenges during her tenure, not just around Covid, and done it with such grace and professionalism,” she wrote. “This nearly 20 minutes of support from both current and former students, parents, and community members represents a mere fraction of the people who stand in her corner.”

DiBiase kept her own thoughts on the issue brief, though she admitted that the development was “surprising.”

“I don’t know how things are going to turn out, but what I do know is that I love my job. I love coming to work every day,” she said. “I love being with my students and attending events and activities. I met this morning with a student who wants to start a gardening club, which I think is an amazing idea.”

Don't miss stories like these when they break, sign up for our newsletter to stay in the loop. Please also consider a digital subscription to support local journalism.