Mich Myette was traveling south on the bike path back towards his home in Bristol when a life-changing moment occurred faster than he could react. 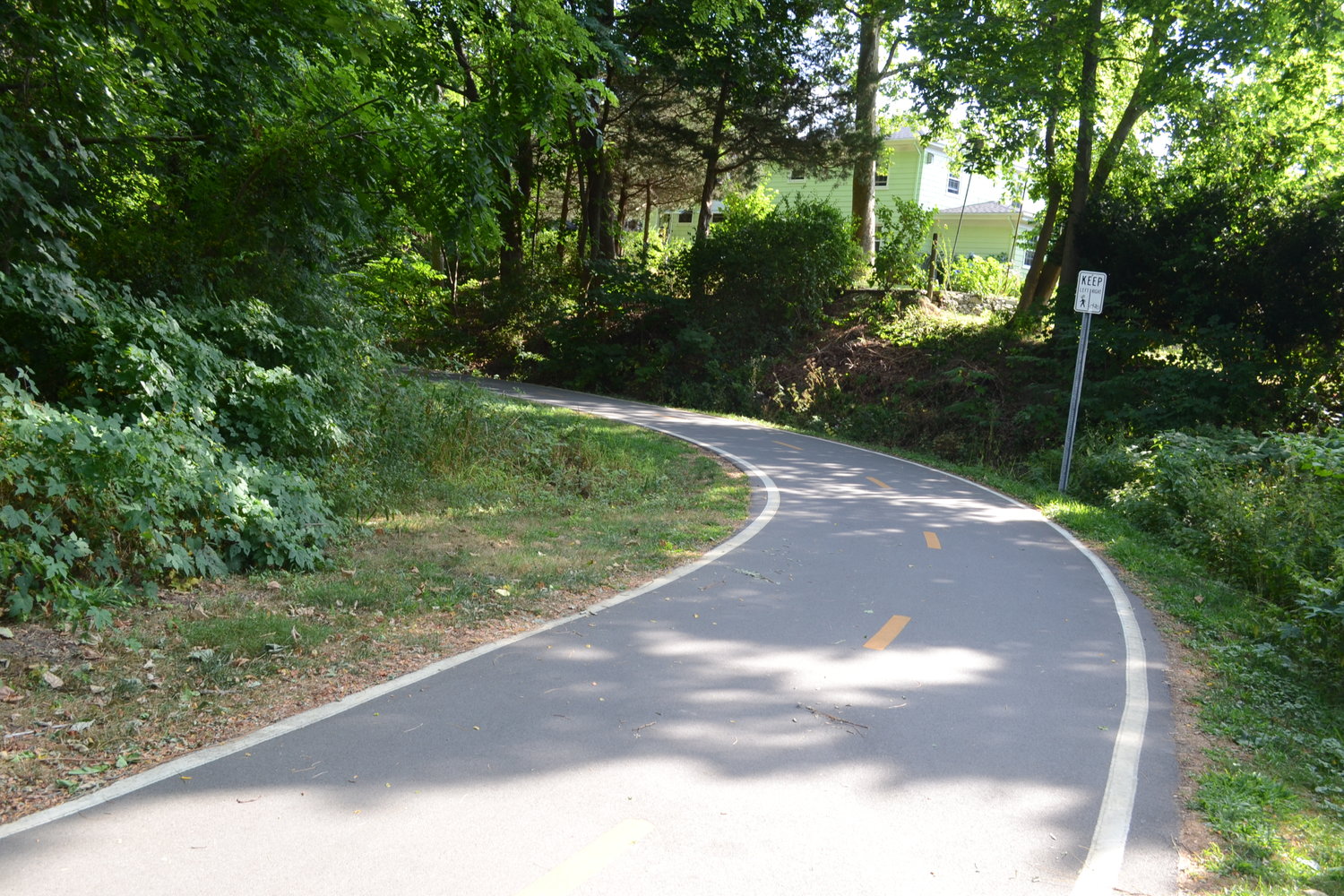 This area near Bridge Street and Beach Street in Warren, is where the incident occurred. A sharp turn provided enough of a blind spot so that the two riders could not see each other in time prior to the collision. 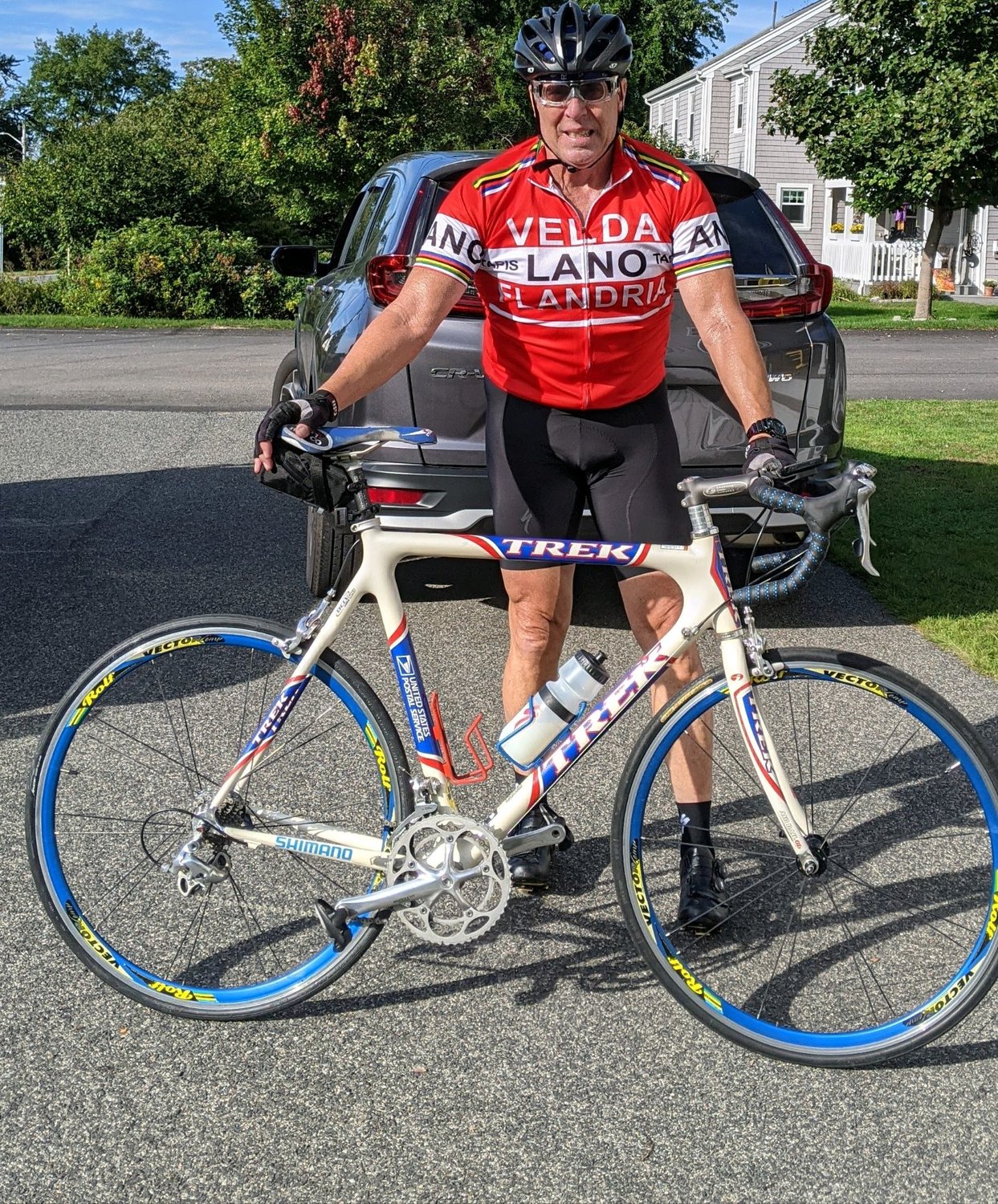 Mich Myette, a Bristol resident and avid cyclist, was severely injured following a collision on the East Bay Bike Path in Warren last month. After the other rider vanished, he is looking for answers. 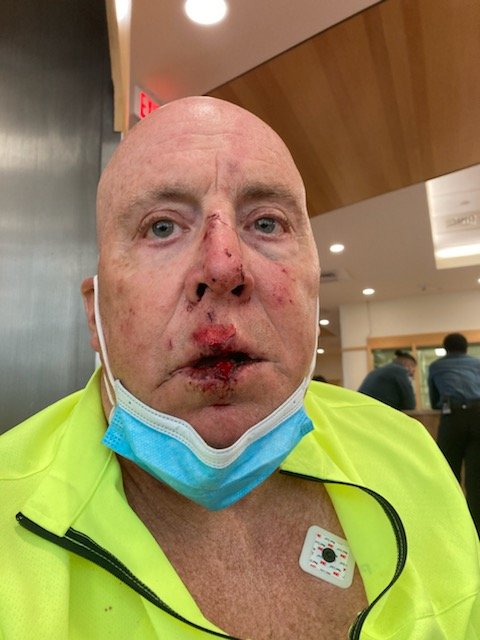 Mich Myette wound up with a severely broken jaw after a collision with another cyclist on the East Bay Bike Path near Bridge Street in Warren. The man who hit him has not been identified after giving a fake name and address to police.
Previous Next
Posted Wednesday, July 27, 2022 12:38 pm
By Ethan Hartley

A local man is looking for answers and more awareness after he claims to have been the victim of a collision near Bridge Street in Warren while riding on the East Bay Bike Path last month.

Mich Myette, a 65-year-old avid cyclist and retired correctional officer, was traveling south on the bike path back towards his home in Bristol after a long ride from Rehoboth, Mass. on the afternoon of June 11. He went to take the sharp turn that comes up while approaching Beach Street after crossing through the Bridge Street tunnel when a life-changing moment occurred faster than he could react.

“There was a guy traveling at a high rate of speed in my lane. He was traveling north in the wrong lane,” he said. “I didn’t have any chance to respond really.”

Myette said the two collided violently, breaking his jaw in multiple places and leaving him in a bloodied heap on the ground. He said at least one person cruised by him, yelling for him to get out of the way, before a bystander came to his aid and called an ambulance.

After a two-hour wait at Rhode Island Hospital, which Myette said was inexcusable, a CT scan revealed that he avoided sustaining a serious head injury. However, for the past 40-plus days, he has been subsisting on liquefied meals prepared by his domestic partner, Donna.

“I can say this is one of the worst injuries I’ve ever experienced, because I don’t remember what it’s like to eat solid foods, it’s been that long,” he said through a grimace, as his jaw is wired shut following extensive surgery. “I spent the Fourth of July eating my food out of a straw.”

Confusion at the scene, investigation hits dead end
When Warren police and EMS arrived on the scene, Myette said that police photographed his bicycle, which was badly damaged, and got his information. Then they spoke to the other rider, who had some superficial scrapes and bruises but was otherwise unharmed. The other man identified himself as “William Jefferson” from Evie Drive in Warren, located near the Bristol Town Line.

But that information, it turns out, was false.

“It turned out that we were unable to locate any William Jefferson through any of our law enforcement sites,” said Lt. Christopher Perreault of the Warren Police Department. “We checked the address that he said he resided at and there is no such address.”

Perreault said that the man did not have a license or other form of identification to present to officers at the time, but that did not strike him as unusual because he was wearing a spandex cycling outfit, and said that cyclists often did not carry wallets or identification on them when riding. The police report described the man as a middle-aged white male with an average build and a black goatee with a touch of gray in it.

Myette said that, originally, the police indicated in their report that the other cyclist was riding a standard pedal bike, but he disputed that and said he believed the man was actually riding an electric bike, also known as an e-bike, which utilizes an electric motor to assist in pedaling. This information, according to Perreault, is now an unknown element of the incident because they cannot find the other rider, and no photos were taken of his bike at the scene.

“We’re interested in just getting a more accurate picture of what happened with the collision, because right now we only have one side of the story in regards to what happened,” Perreault said, adding that in the original interview with police, the man who collided with Myette said that Myette had actually hit him from behind.

Perreault said that police looked into finding surveillance footage of the crash, but there was no camera in the area where the incident occurred. He said they also interviewed neighbors in the area that the man claimed to be from, but nobody recognized the man by his description.

“At this point I’m not sure what else we could do…It’s frustrating,” Perreault said, adding that he hoped the man would either come forward to investigators or that someone will have more information once the story is circulated in the news media that can lead to his true identity.

Bigger implications for bike path?
Myette, who has been riding the bike path for many years and said he has seen firsthand the popularity of the path increase in recent years, said he was concerned for the potential of more accidents occurring like the one that happened to him.

“There’s going to be some serious injuries moving forward,” he said. “With the popularity of the bike path now, things have changed drastically. I see kids as young as six and seven years old riding e-bikes. It’s a very narrow area and you have people walking their children with baby strollers, people on e-bikes traveling super fast, you have runners, walkers, electric unicycles…The number of accidents is going to increase.”

Regarding enforcement of rules on the bike path, Perreault said that the Warren Police have officers on bicycles that patrol and look for infractions. He confirmed in a call with the Department of Environmental Management, which has concurrent jurisdiction on the bike path along with Warren PD and the Rhode Island State Police, that e-bikes are not actually permitted on the bike path at all.

“I think it’s a gray area right now,” Perreault said in regards to people understanding and abiding by the law. “But it’s coming to a head right now where they’re going to have to maybe start strictly enforcing it.”

Both Myette and Perreault agree that more awareness is required by all parties who utilize the bike path.

“They need to be aware of their surroundings, look over their shoulder and follow the posted signs while using the bike path,” Perreault said. “Sometimes people may be talking or have their phones out and not be looking up ahead.”

“I want to get this point across that people need to know the rules of the road on the East Bay Bike Path. They need to carry some type of identification on them, maybe a phone,” Myette said. “We want people to be aware of the dangers, and we need people to be courteous and they need to have some kind of compassion if they see someone.”

And Myette has some sage advice for any cyclist or recreational user of the bike path.

“I see a lot of people riding without helmets. That’s the number one piece of equipment you can have for cycling,” he said. “My helmet probably saved my life.”