EAST PROVIDENCE — The COVID-19 pandemic did something neither World War II, the Korean War, the Vietnam War nor any of the numerous other historic events over the past 90-plus years … 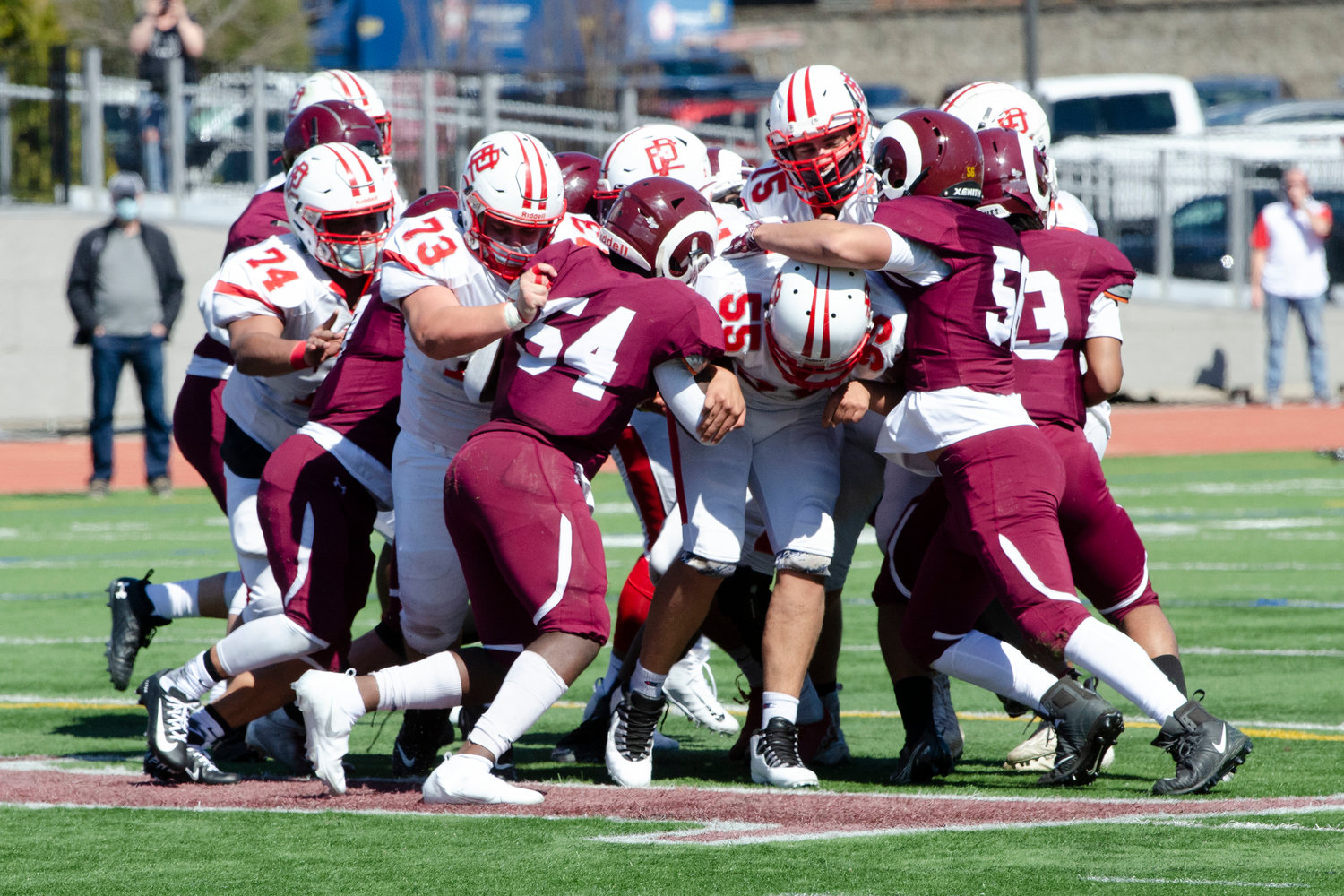 EAST PROVIDENCE — The COVID-19 pandemic did something neither World War II, the Korean War, the Vietnam War nor any of the numerous other historic events over the past 90-plus years couldn’t do: force the cancellation of the East Providence High School-LaSalle Academy Thanksgiving Day football game.

The 2020 version of the historic holiday rivalry, like the rest of the season last fall, did not take place due to health and safety measures put into place locally to deal with the global pandemic, the worst of its kind in a century.

To the gratitude of all involved, the 2021 edition is back without a hitch. The Townies make the trip to Providence for their traditional Thanksgiving Day clash with LaSalle at the Rams’ Cimini Field on Thursday morning, Nov. 25. Kickoff is 10 a.m.

Though their holiday encounter didn’t take place, the Townies and Rams did actually get a chance to play football during the 2020-21 term, but did so in an abbreviated season in the spring. LaSalle defeated East Providence 42-0 Division I opener for both sides held Saturday afternoon, March 27, also at the host Rams’ Cimini Field.

The loss was the first for the Townies in their brief, one-off spring endeavor, which ended with East Providence going winless at 0-4 during what was the first on the sideline for new EPHS head coach Jon Stringfellow.

The 2021 fall season, thankfully played without interruption due to COVID, began much the same way as its spring predecessor before the Townies turned things around late to finish with a 3-6 overall record, all three E.P. victories coming over its final four games.

The Townies defeated both Cranston schools to earn a Division I playoff spot. Central edged E.P. in the opening round. The Townies then avenged an early season loss to Barrington with a non-league win over the Eagles last week .

“We finished the season strong with the wins over East and West and coming close against Central then beating Barrington,” said Stringfellow. “The kids coming back are excited to finish the season with Thanksgiving and to get ready for next year. The seniors are looking forward to Thanksgiving because they didn’t get to play last year. They’re looking forward to being part of that tradition one last time.”

LaSalle is coming off yet another meeting against Bishop Hendricken for the overall Rhode Island State Championship title, the Rams falling to the Hawks in a high-flying affair 49-40 last weekend.

“LaSalle is very talented. They’re a good team. I’m sure after the shootout they had with Hendricken in the Super Bowl Thanksgiving is going to be quite interesting,” said Stringfellow.

He reckons he started attending games of all kinds, including on holidays, when he was old enough to walk back at the start of the 1970s. The younger Stringfellow later played in three games for his father in the early 1980s then was involved in the game for 12 years as an EPHS assistant coach under both Steve Silva and Sandy Gorham from 1991-2001.

Since and until now, Stringfellow spent most of his Thanksgivings with Hendricken, where he was on staff as head coach of the freshmen program.

To get his team ready for this year's contest, Stringfellow showed the Townies film of the 1971 holiday game between the s, a 14-7 win by LaSalle. Stringfellow said he showed that particular game because it’s the 50th anniversary and he wanted to give his current players a feel for how the game was played in years gone by. It was also part of a pet project for the coach, who has spent the better part of the last two years converting his father’s reel-to-reel EPHS game films into modern digital form.

“It’s fun to be back in it,” Stringfellow said of his return to the E.P.-LaSalle rivalry. “It brings back a lot of good memories. Even though the game doesn’t count in the (regular season) standings anymore, it’s still Thanksgiving Day. It’s about playing football against LaSalle and the memories that go along with it."

This year's game is just the third Thanksgiving Day contest between the schools to be played on the LaSalle grounds since 1982. A fire at that time made playing there unfeasible. The game moved between Pierce Stadium here and Conley and Brown Stadiums in Providence until 1988 before settling in at Pierce for nearly the next three decades.

Upon the game no longer being a regular season league contest some eight years ago, LaSalle opted to bring the contest back to its renovated Cimini Field in 2016.

“It’s going to be different. I never played or coached on Thanksgiving at LaSalle,” Stringfellow added. “But it doesn’t matter where we play. It’s one more game for our seniors and one more game for us together as this group. This team will never be together again after Thanksgiving Day. So it’s nice to have this one last chance. It’s nice to create these memories and enjoy the moment one last time together. That’s what Thanksgiving Day football is all about.”