With less than three weeks to go before the General Election on Tuesday, Nov. 3, candidates for Rhode Island Senate District 10 (Warren, Bristol and Tiverton) squared off Thursday night in an online … 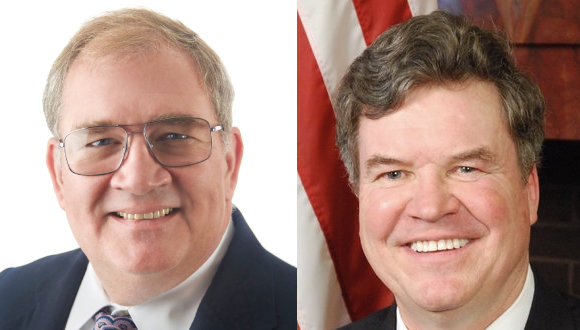 With less than three weeks to go before the General Election on Tuesday, Nov. 3, candidates for Rhode Island Senate District 10 (Warren, Bristol and Tiverton) squared off Thursday night in an online debate sponsored by the League of Women Voters of Rhode Island and East Bay Media Group.

Sen. Walter Felag, a Democrat from Warren who has been involved in municipal and state government for 40 years, is being challenged for his seat by fellow Warren resident Mark Smiley, a Republican who formerly chaired the state Republican Party.

In a series of questions posed beforehand by members of the public, the candidates and moderator Christy Nadalin covered the Covid-19 pandemic, the state economy, environment, school choice and political philosophy. Sen. Felag spoke of his long history of public service, while Mr. Smiley said he will give the General Assembly much-needed political balance if elected.

The first question dealt with the candidates' top priorities. Mr. Smiley said his three top agenda items include school choice, political balance in state politics, and the importance of fully funding first responders — "pulling funding from them is not a good idea, at all," he said. As for school choice, he favors a model where school funds would follow the student, allowing those who don't feel they're being well-served to "go to a different school."

"If their school is lacking, they can move," he said.

Sen. Felag said his top priority is the budget, and that it must truly serve the public:

"It has to reflect the needs of the people," he said. "It has to be balanced; we have to continue to eliminate the car tax (and we need) a safety net for our seniors and the disabled. Another top priority, he said, is "prompt constituent service," and a third his willingness to make himself accessible to the public.

Mr. Smiley responded to Sen. Felag's budget priority, saying that the state legislature has "punted the football" by not meeting enough on budget issues in the midst of the pandemic. "They're not going to start looking at it until after the election, in January. That is not leadership."

"The senate has met as a body four different times during the Covid pandemic," he said. "More importantly, as a member of the finance committee, we have met 10 times since March, last week for two and a half hours. The senate has been doing their due diligence."

Covid response
Both candidates said the state could be doing more to contain the Covid-19 virus.

"The governor's done a very good job of addressing the issue," Sen. Felag said. "As far as small businesses are concerned, I think we need to do a better job."

One of the biggest issues, he said, has been the low amount of state funding small businesses in crisis have been able to receive. Until this week, there was a cap of $15,000 per small business, "and that's not enough."

"I'm glad to see the governor say she would double that amount."

"We need to focus in on the elderly and the infirm," Mr. Smiley said. "I don't see that as having happened. This idea that we would keep senior citizens (in isolated nursing homes, tightly grouped together) was like storing a lit match inside a gasoline container. It doesn't seem to be addressed going forward."

An even bigger issue, he agreed, is the way the state has treated small businesses in Rhode Island over the past six months.

Economic development
Attracting more business to the state is a top priority of both candidates. When asked how economic development funds could best be used to support businesses and prospective businesses without unduly risking taxpayer dollars, Mr. Smiley said regulations need to be scaled back, and freebies no longer given.

"We should be loaning money out, unlike these 38 Studios-type grants," he said. "We need to stop doing so much regulation that it's just impossible to get through the system.

He said he favors a concierge system at the state house that would help ease the way for prospective companies planning to locate in Rhode Island.

Sen. Felag said that as the state's budget is reliant on the income and sales taxes, "we need to focus on generating more income taxes and sales tax, and that can be done by improving the business climate."

To do that, he said he favors enterprise zones "so we can increase our business and become a state that welcomes business."

Green energy
The two candidates gave different opinions on the governor's pledge to have 100 percent renewable energy in Rhode Island by the end of the decade. While Sen. Felag said he supports the expansion of solar projects here and said the time to start a dialog on climate change is now, Mr. Smiley was more wary:

"The only way (to get to the governor's 100 percent goal) is to get Canadian hydroelectric power here in Rhode Island.

"We need to address that roadblock," he said. "I don't know that we can ever get to the point where we are 100 percent (renewable) without that," no matter how many windmills and solar farms are built.

"But if we tap into that Canadian hydroelectric, we can get there from here."

Police reform
When asked about police reform initiatives in the wake of the George Floyd murder, "I would certainly like to see us put more money into mental health," Mr. Smiley, a former military police officer, said.

"That's the most important piece. Defunding the police? Absolutely not. That just can't be."

"I believe our police do an excellent job overall," Sen. Felag added. "There's always room for improvement and I'm glad to see the police sign on" to a statewide initiative, brought forward by the Rhode Island Police Chiefs Association, to undertake 20 reforms by the end of the year.

"We ask so much of our police departments these days," he said."

Legislation
When asked about reforms and policy changes that would make it easier to bring popular legislation to the floor for State House debate, Mr. Smiley said the easiest way is to vote for a Republican:

"Get more of the opposition party up there," he said. "If the Senate needed Republicans to pass anything, that would change everything up at the state house. That's not the case today. In many cases, a bill brought forth by a Republican will be ignored until suddenly it appears with a Democrat's name on it, if it's a good idea."

To a portion of that comment, Sen. Felag agreed, saying, "If it's a popular bill, obviously it should be brought to the floor. I work well with both sides."

Estate taxes
When asked how to combat the exodus of moderate and high income Rhode Islanders who leave the state in their senior years due to the state's estate taxes, Sen. Felag said he favors a cap on taxes and said he has worked on legislation to make those taxes more equitable and fair. Mr. Smiley said the whole system needs to be looked at:

Unfortunately, he said, "we have a spending problem in Rhode Island; we don't necessarily have a revenue problem. We need to look at getting more out of our government (and taking) a good hard look at making cuts ..... something that doesn't seem to happen."

Why vote for me?
Both candidates said they are the best person for the job, but for quite different reasons:

"My opponent is one of the most likable guys on the planet," Mr. Smiley said. "The only problem that I have with him is he's a solid Democrat vote in a party that is so far a majority at the state house that it no longer needs to follow its own rules."

If there were more Republicans serving the state, he said, Rhode Island would be in better shape and balance, and that is why he's running.

"I like to go on my experience," Sen. Felag said. "I'm a person who has demonstrated leadership, integrity, and has the ability to respond and learn from my constituents."

Since the pandemic started, he said, he has fielded more than 450 calls, emails and text from constituents looking for help. He will continue to try to do his best for them, he said, and he also will fight for his towns given his years of experience and insight into how government works at the town level.

Note: The debate will be available for online viewing Friday, Oct. 16, on the League of Women Voters website.