Democrat June Speakman of Warren is headed back to the General Assembly, after the District 68 Representative won her re-election campaign Tuesday by defeating Libertarian William "Billy" Hunt 3,943 … 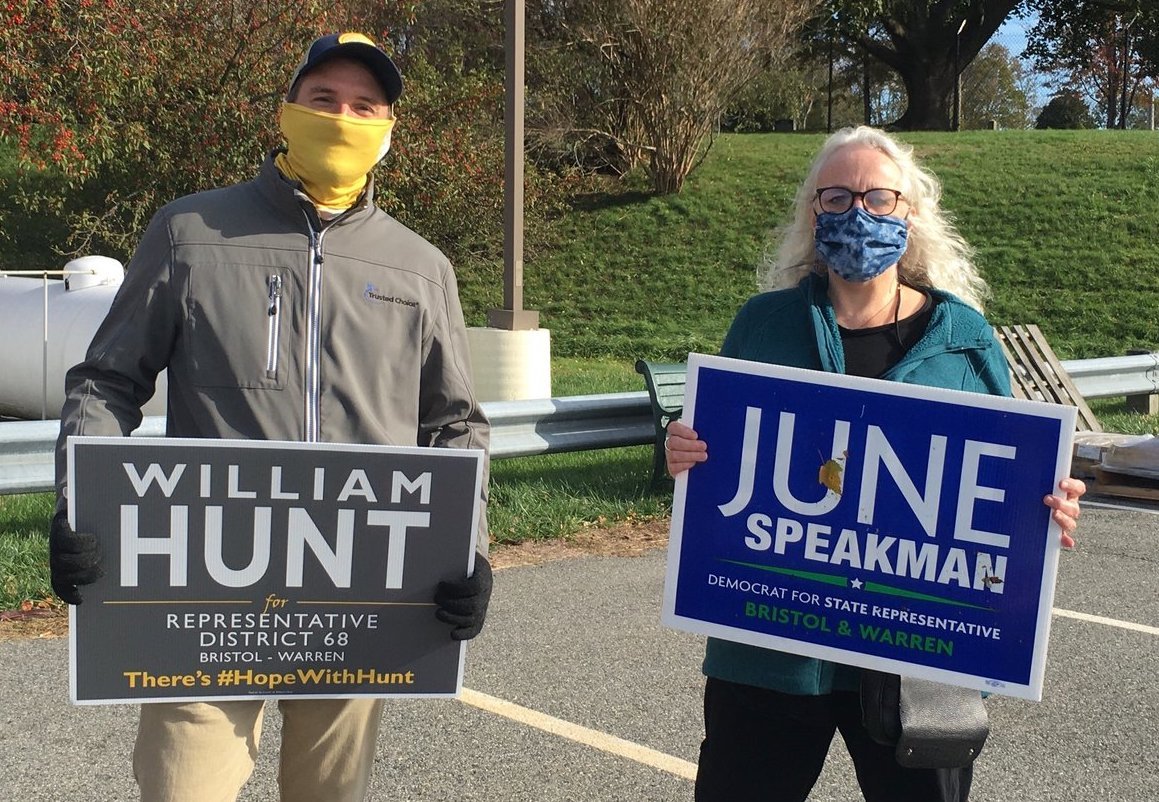 Libertarian Billy Hunt, left, and Democrat June Speakman, right, campaigned next to each other Tuesday at the Quinta Gamelin polling station in Bristol.
Posted Wednesday, November 4, 2020 1:55 pm
By Ted Hayes

Democrat June Speakman of Warren is headed back to the General Assembly, after the District 68 Representative won her re-election campaign Tuesday by defeating Libertarian William "Billy" Hunt 3,943 to 2,626.

Ms. Speakman, a political science professor at Roger Williams University, said she is excited to get back to work, but conceded that much needs to be done to help the state navigate the Covid crisis, help small business and fight for the environment here.

"I'm looking forward to getting back to work on the issues that matter," she said Wednesday. "There are so many. I'm grateful to have received the support of voters."

Mr. Hunt, who also lives in Warren and welcomed a new son into the world two weeks before the election, said that while he expected the final result, he was glad to make a good showing.

"This was my fourth time and I was happy with the way things went," he said. "All things considered, with the pandemic and having a pregnant wife at home, I got my highest vote total and highest percentage of the vote" among all four campaigns.

Like Rep. Speakman, Mr. Hunt stayed up late into the night waiting for votes to come in, and called her Wednesday morning to congratulate her once it became clear that the mail ballots had given her the edge. His gesture, and the way he ran his campaign, was much appreciated, Rep. Speakman said.

"I really appreciated the civility of this campaign," she said. "Bill and I had great conversations and he ran a good campaign."

One of the things that interested her most about Rhode Island's races was the defeat of District 15 Representative Nicholas Mattiello, the outgoing Speaker of the House, who was defeated by Barbara Ann Fenton-Fung Tuesday. During her first term, Rep. Speakman said she and many others felt stymied by leadership who she said were averse to holding legislative sessions via Zoom or other online formats. She hopes that will change with a new speaker.

"It'll be interesting to watch" what happens, she said. "The House is going to run differently than it has in the past, and that I think is good news. We do have to get back to work (and) I hope the new speaker is more amenable to having meetings online. Municipalities across the state adapted to it so I no reason why the House and Senate can't do that either."

Once she does return, she hopes to legislate change on environmental and economic fronts, and said she also wants to help oversee nursing home reform. Seeing what happened with patients, staff and families during the pandemic's early days was an eye-opener, she said, and needs to be addressed:

"We've got to find a way to make sure they are appropriately staffed and that staff is well-compensated, and that they can affectively handle the pandemic."

She also wants to work on legislation that will help small businesses trying to stay afloat in very tenuous financial times.

"It became abundantly clear" during the pandemic's darkest days that businesses weren't being as supported as they could or should have been, she said.

"We need to bring them back."

As for Mr. Hunt, he wasn't ready to confirm that he'd run for the seat in two years. However, he teased, "I have the signs so why not?"

"It's nice to be going in the right direction," he said. "The nature of running as a Libertarian is that it's not going to be an easy road. But just the fact that I was in the race, getting people talking and keeping everyone accountable, I think that's a good thing."