The 30-year-old Portsmouth resident goes scuba diving year round in New England, has spent plenty of time in Canada and … 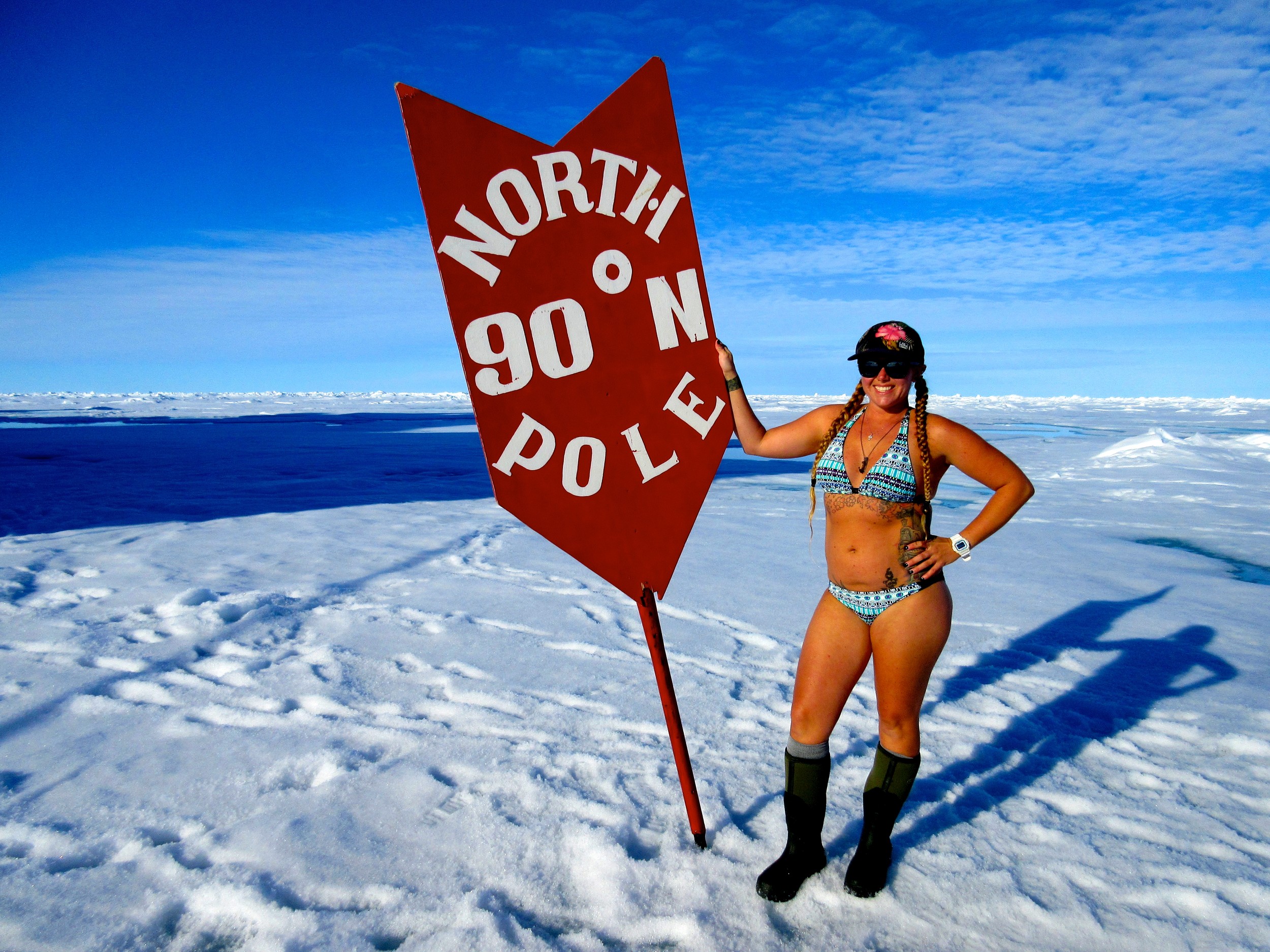 Posing in a bikini at the North Pole in 2016 was no big deal for Breezy Grenier of Portsmouth, who scuba dives year round in New England and is used to cold weather.
Courtesy of Breezy of Grenier 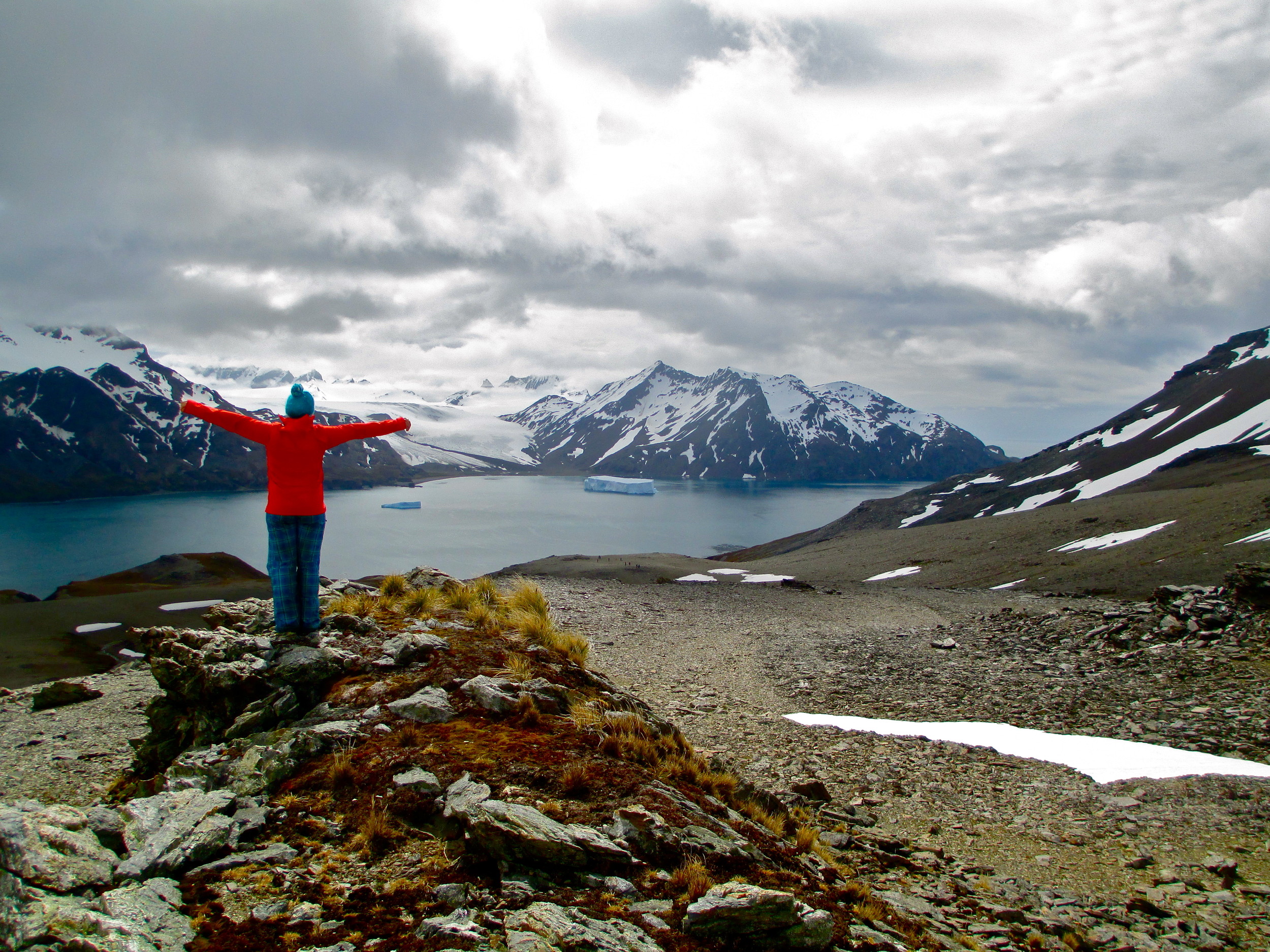 Breezy Grenier takes in the view during the “Shackleton Walk,” which retraces famous explorer Sir Ernest Shackleton​’s footsteps across South Georgia, an island in the southern Atlantic Ocean. She made the trip in 2013.
Courtesy of Breezy of Grenier 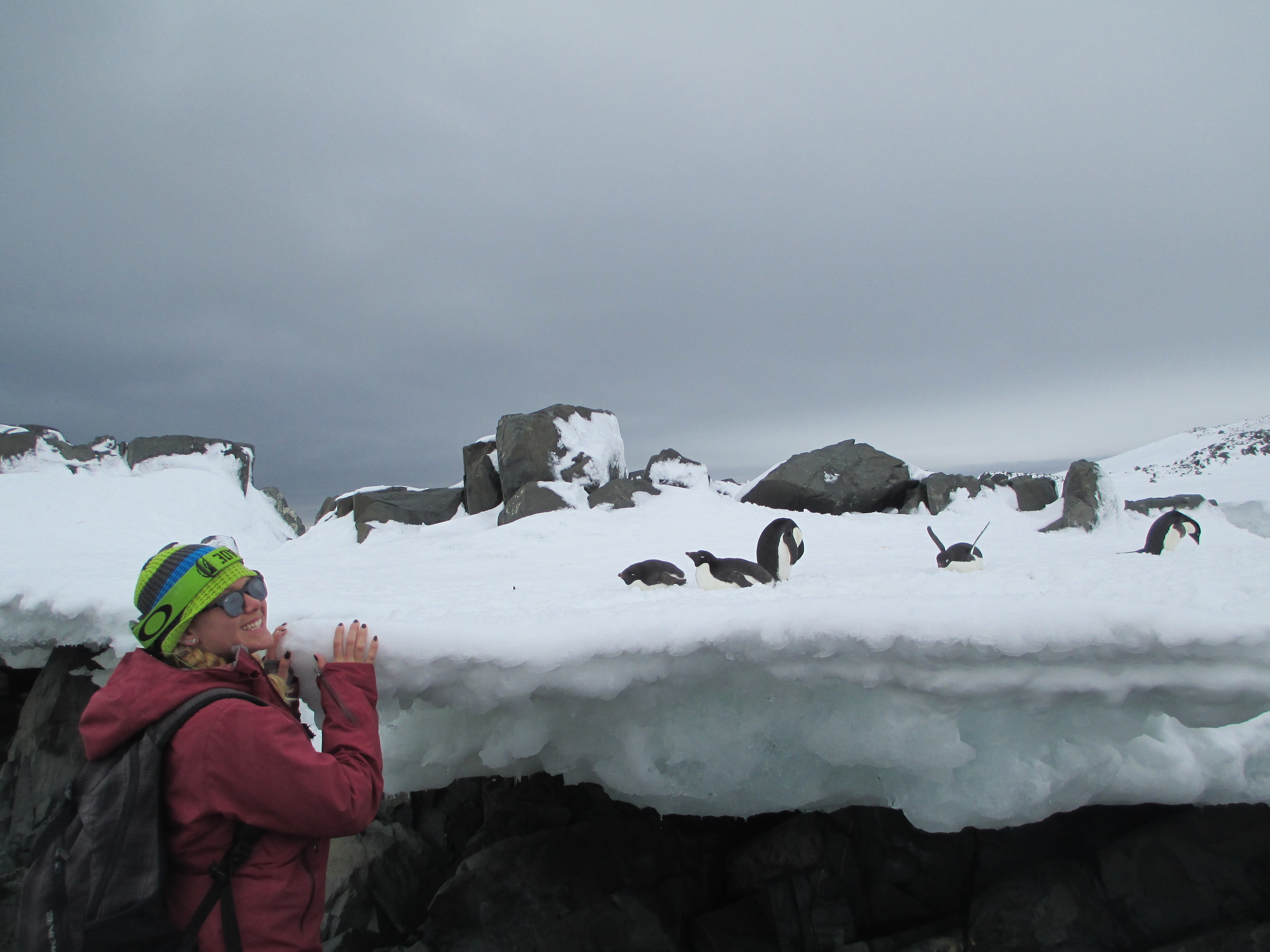 Breezy Grenier mingles with the penguins at Hope Bay in the Antarctic Peninsula in 2013.
Courtesy of Breezy of Grenier 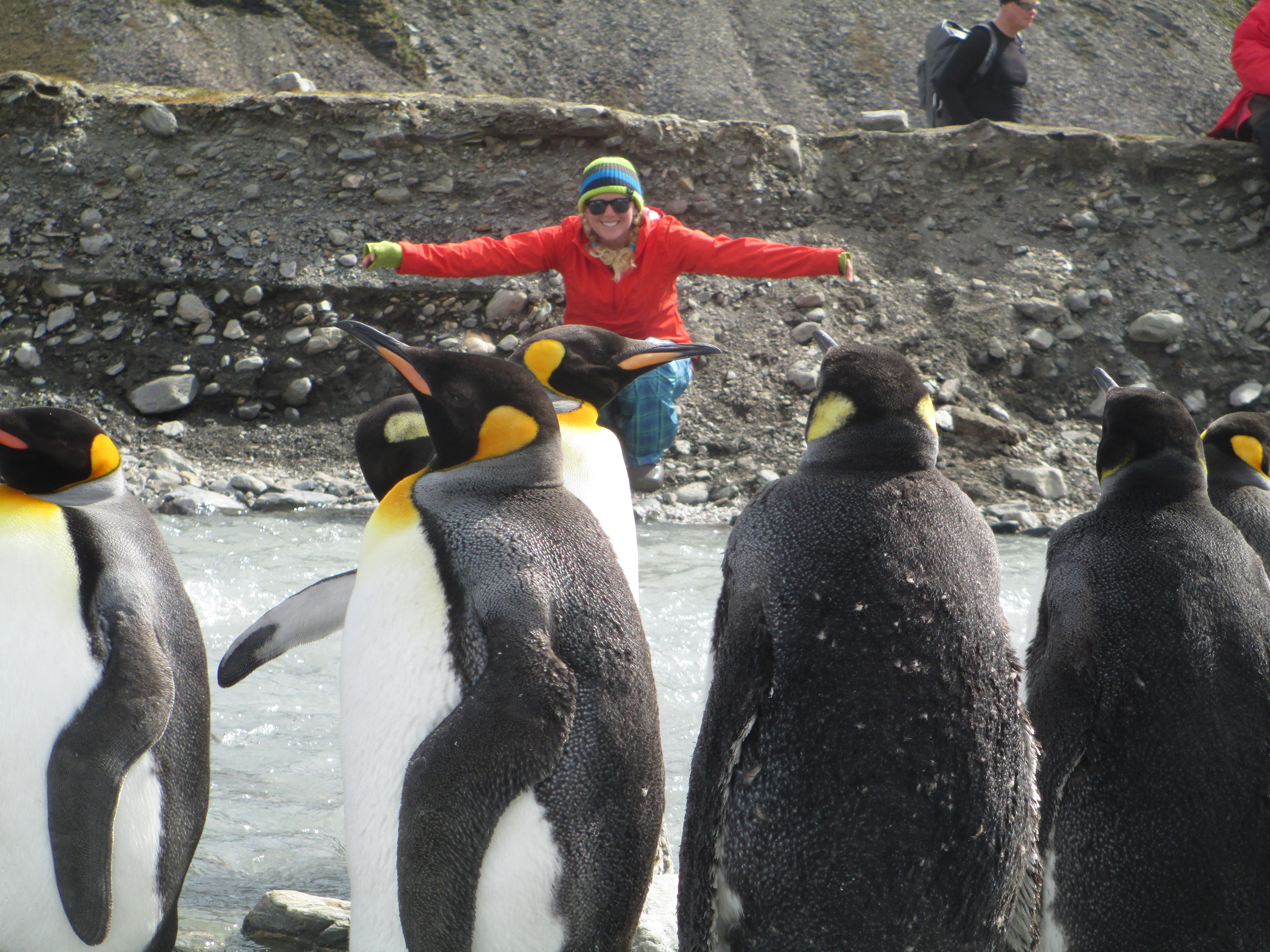 Saint Andrews Bay, which indents the north coast of South Georgia in the southern Atlantic Ocean, is a prime breeding area for king penguins, here being greeted by Breezy Grenier in 2013.
Courtesy of Breezy of Grenier 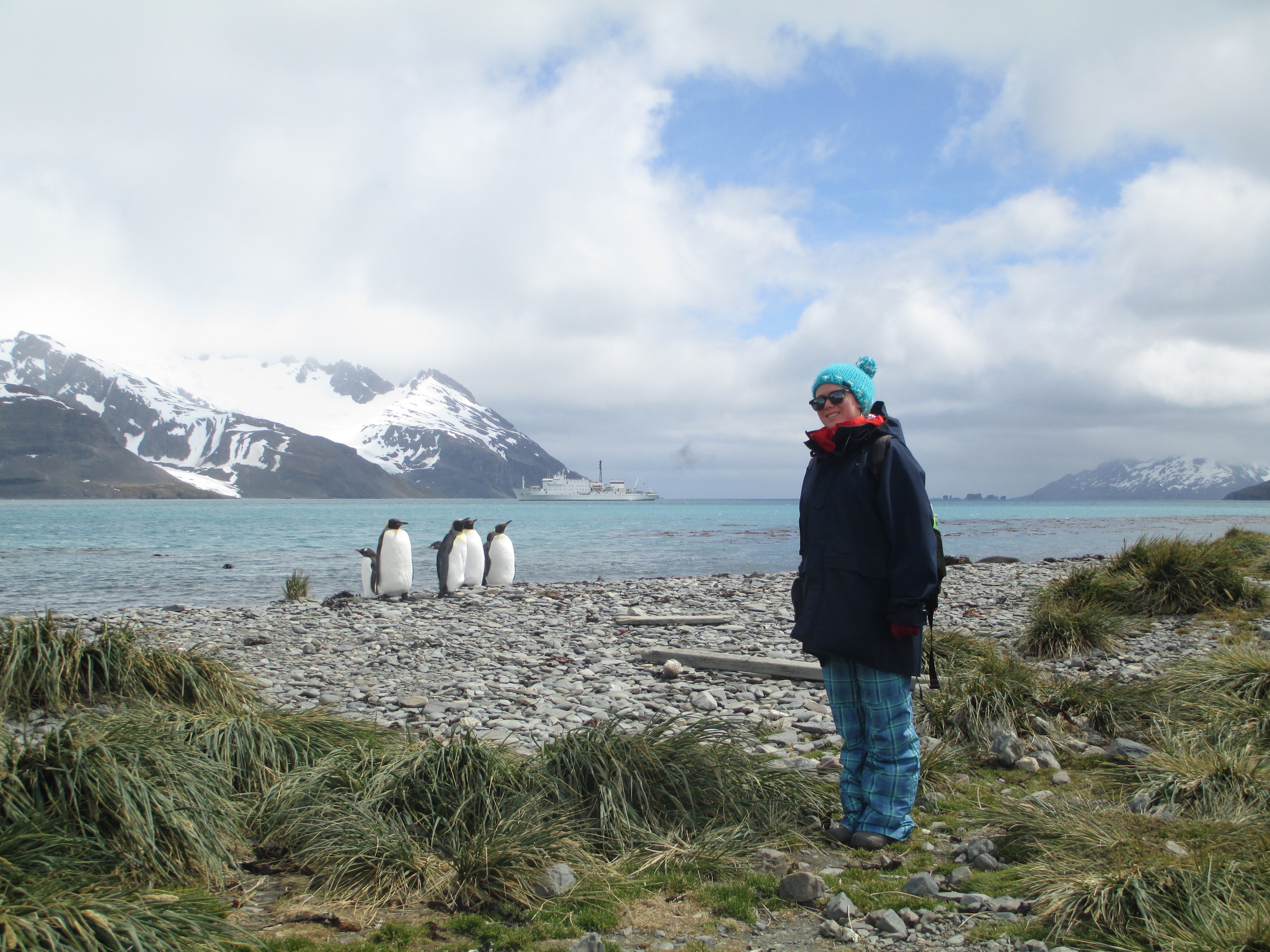 Breezy Grenier hangs with the penguins in Antartica in 2013.
Courtesy of Breezy of Grenier 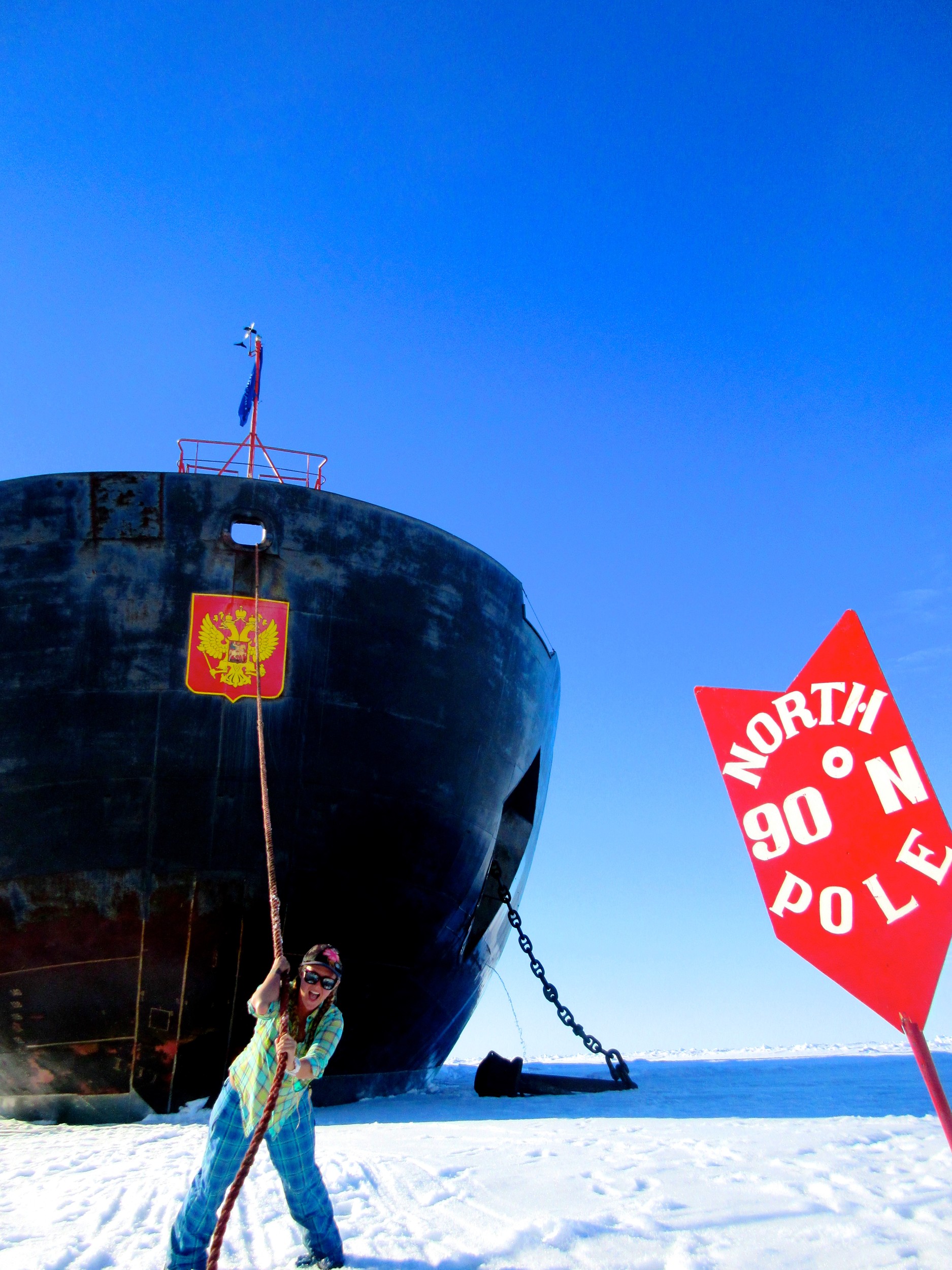 Breezy Grenier clowns around near an icebreaker at the North Pole during her trip in 2016.
Courtesy of Breezy of Grenier 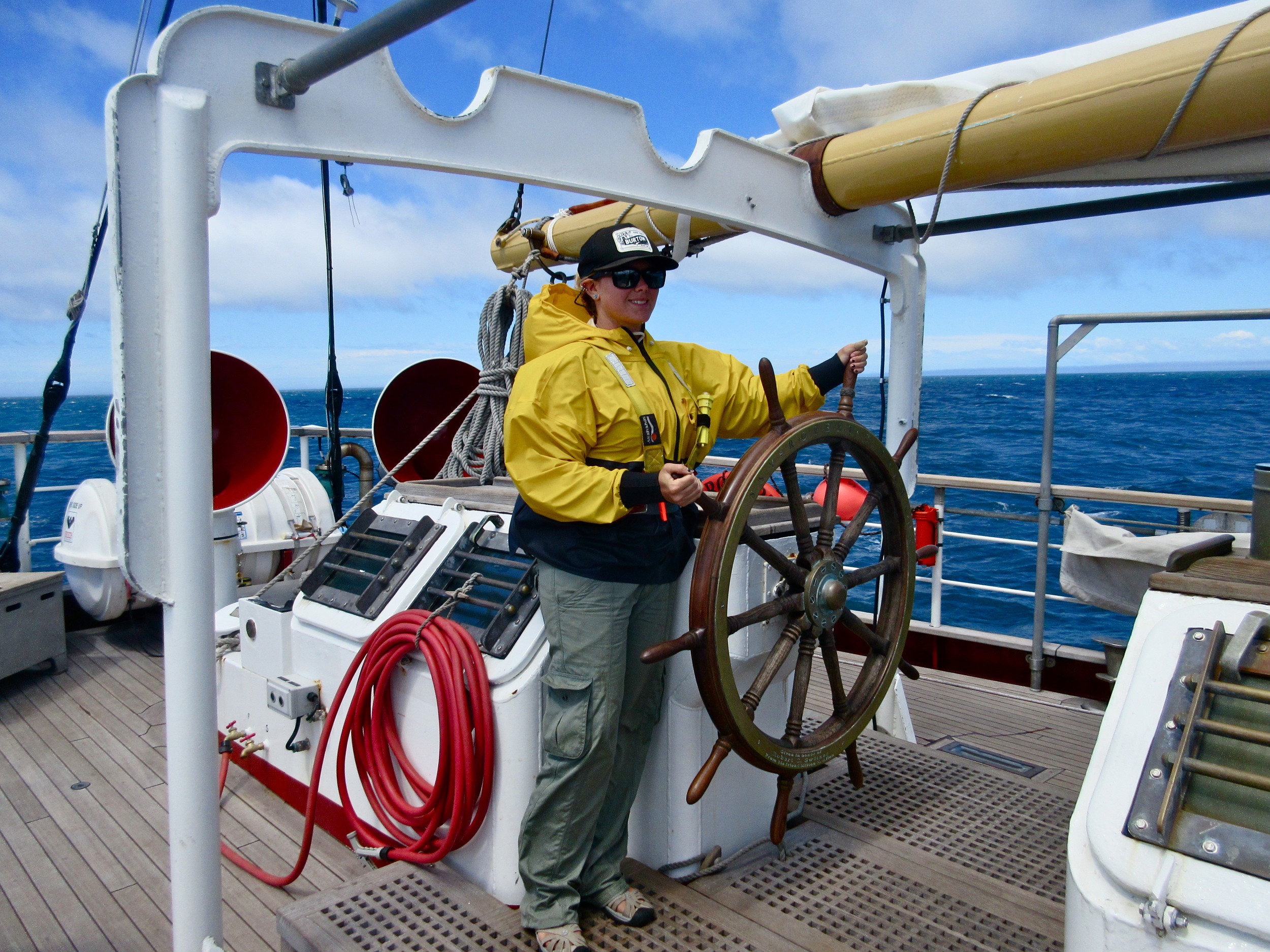 Manning the wheel during a Sea Education Association trip to New Zealand in 2014.
Courtesy of Breezy of Grenier 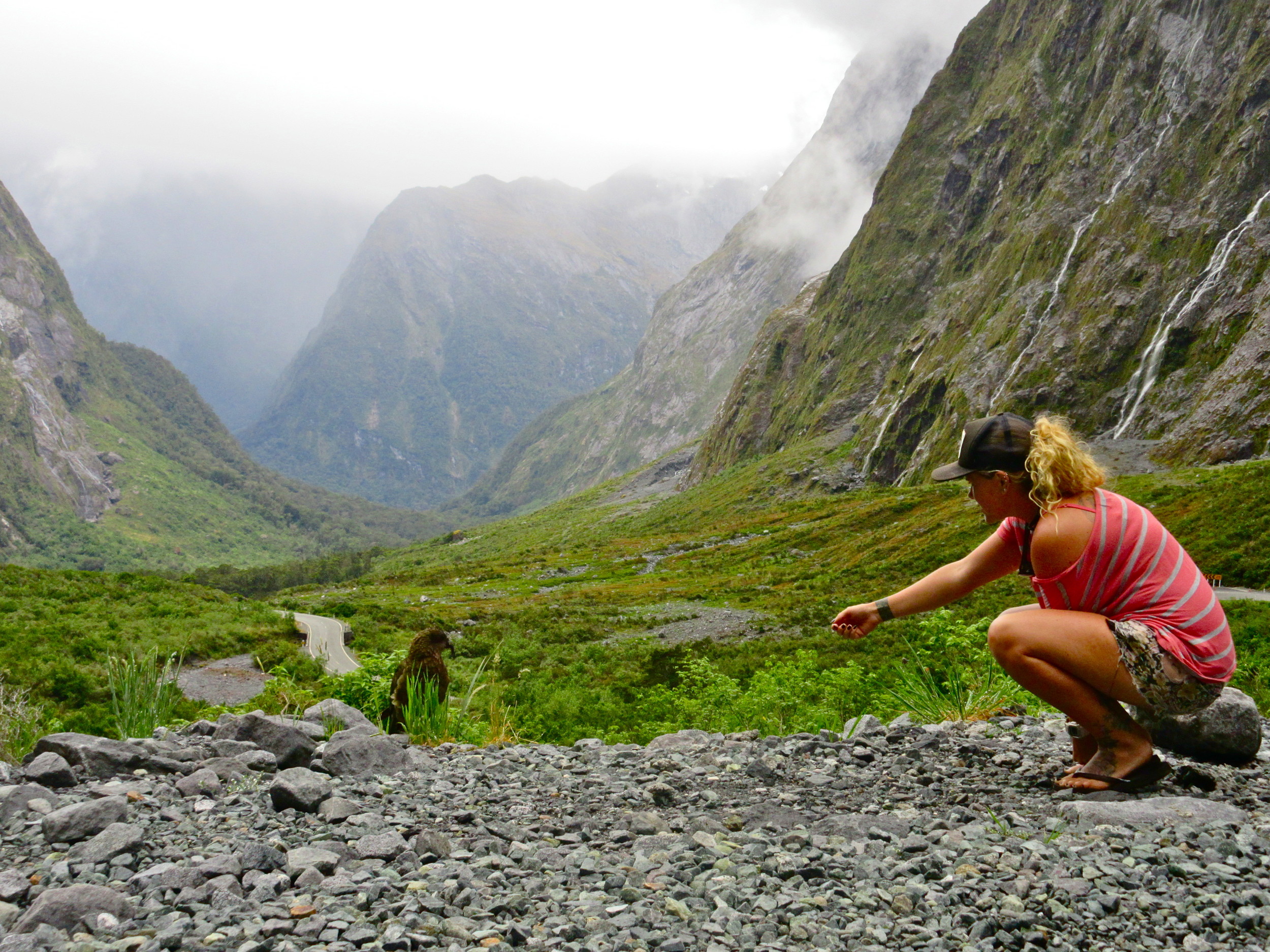 Breezy Grenier tries to coax a feathered friend at Milford Sound, a fiord on New Zealand’s South Island, during a 2014 trip.
Courtesy of Breezy of Grenier 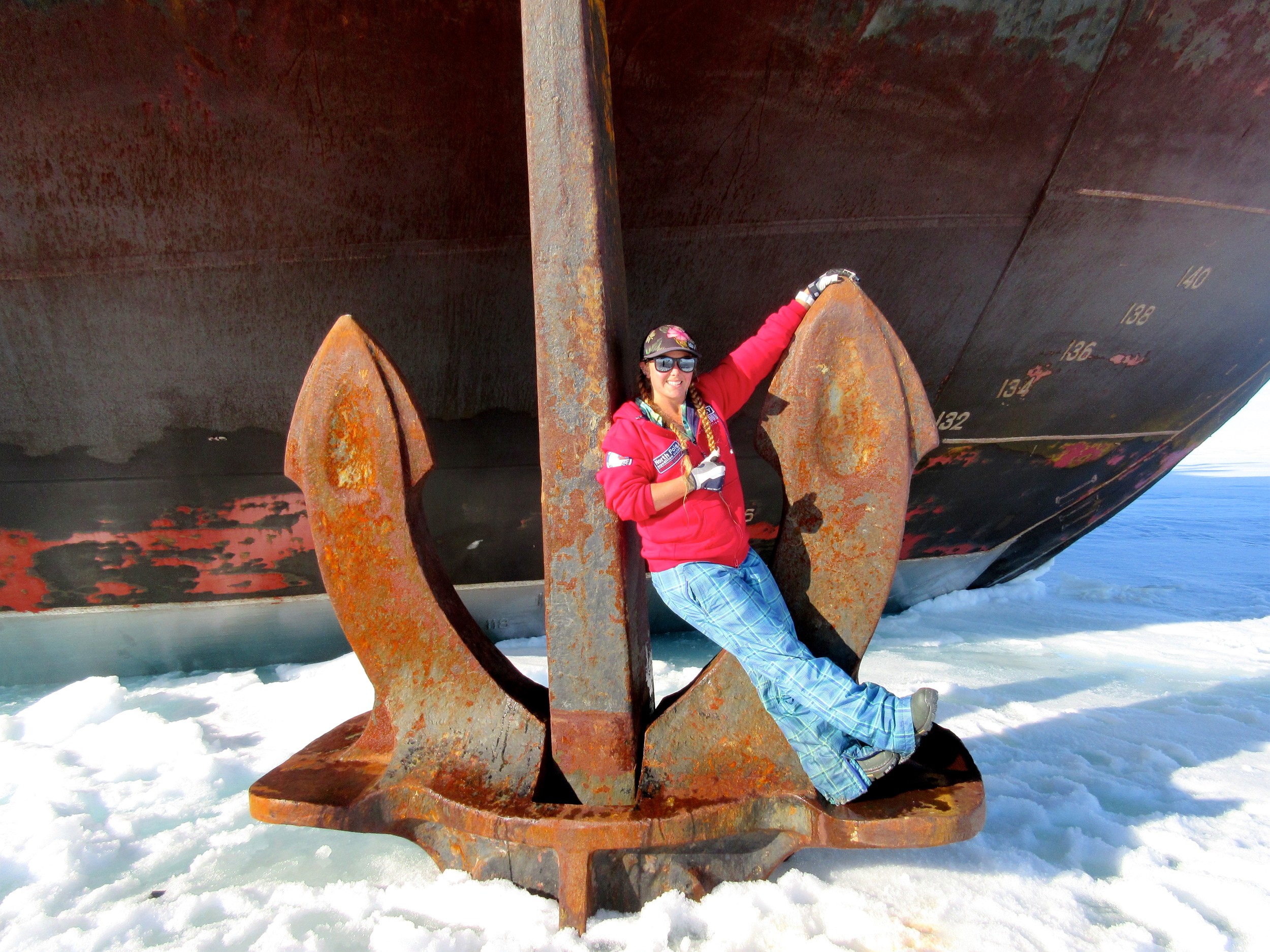 At Anchor at the North Pole, 2016.
Courtesy of Breezy of Grenier 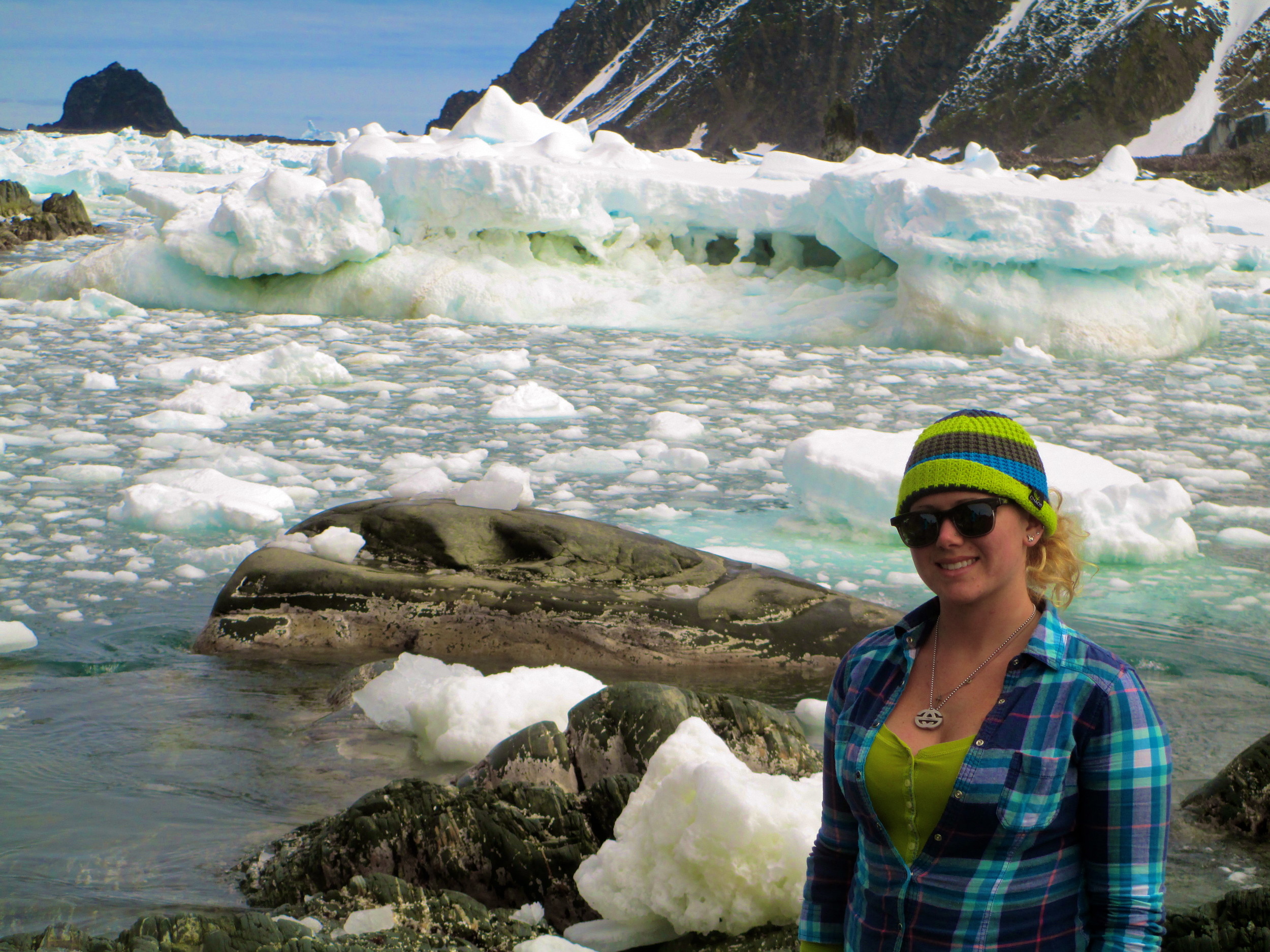 Breezy Grenier at Lookout Point at the top of Caversham Valley, New Zealand, in 2013.
Courtesy of Breezy of Grenier 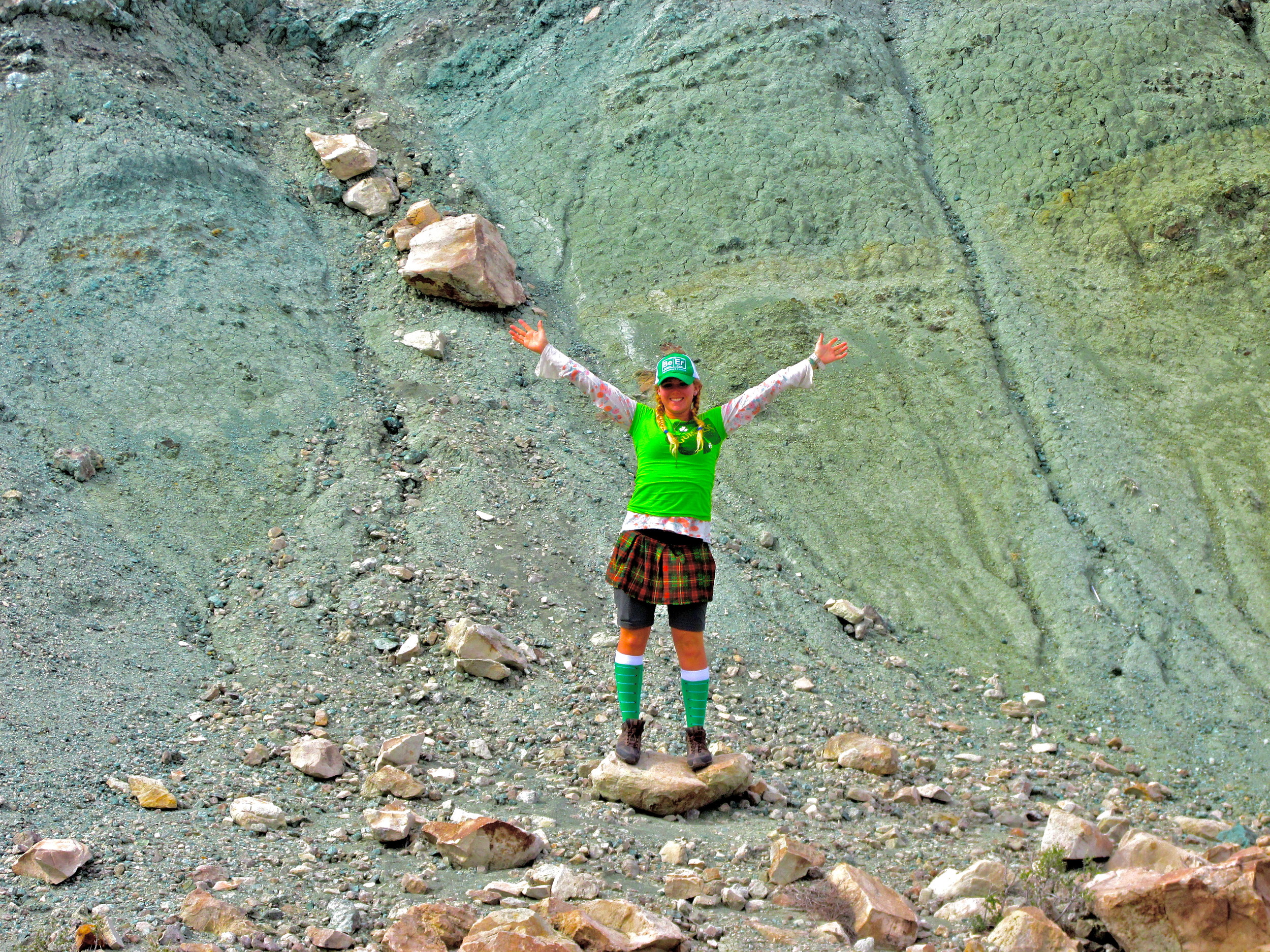 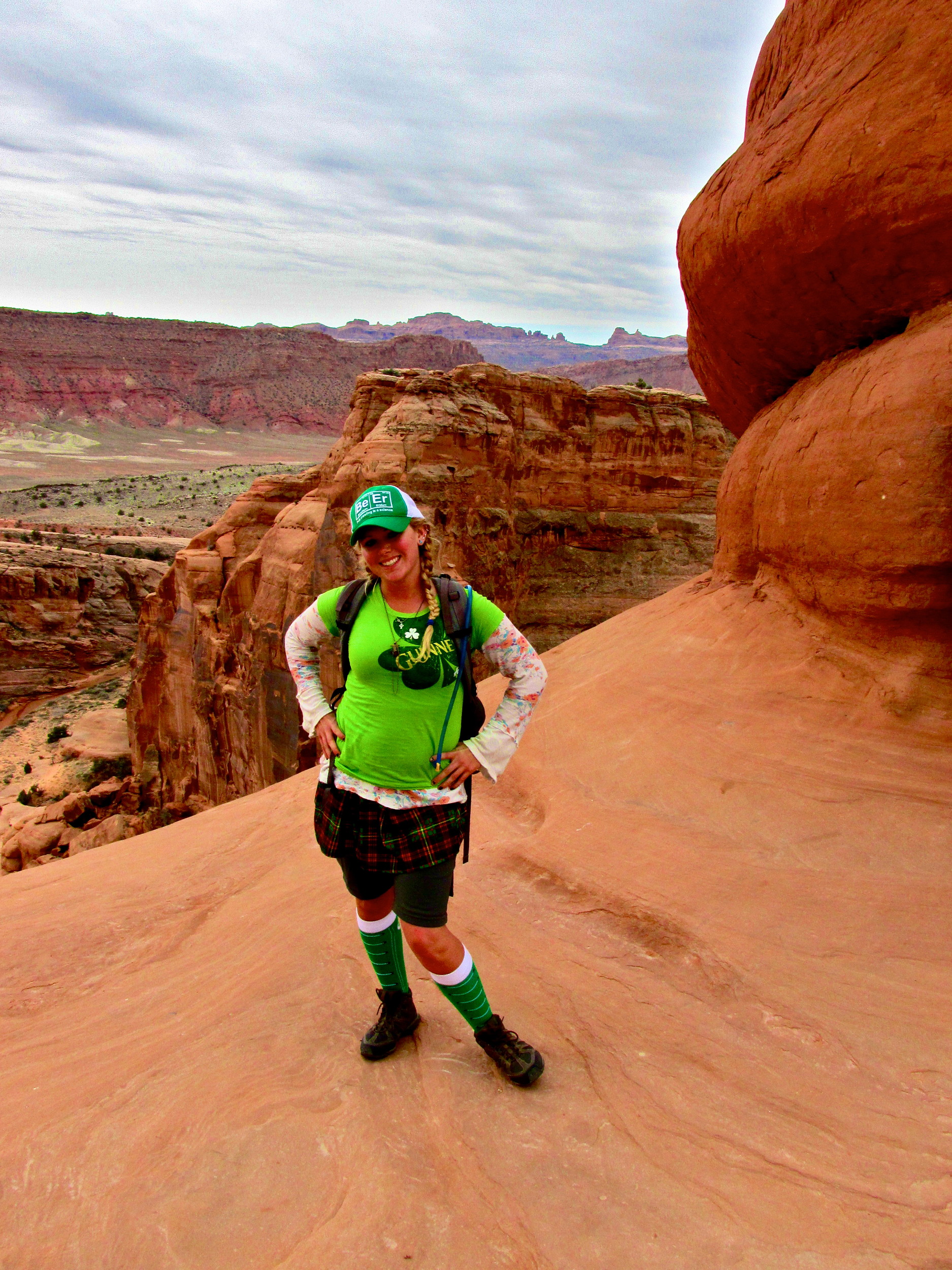 Africa is the only continent I haven’t visited and the Indian Ocean is the only ocean I haven’t been in.”
Breezy Grenier
How you can help Breezy

From Aug. 4-17, 2018, Team Sedna will conduct an expedition which includes visiting Inuit communities in Nunavut — Resolute Bay and Pond Inlet and in Western Greenland — to study the impacts of global warming in the Arctic. It will be Sedna's third Arctic dive-and-snorkel expedition since 2014.

The trip is very expensive, and each volunteer participant is paying her own way, including the cost of flights, vessel usage, polar dive equipment and many more expenses.

Breezy Grenier has started a GoFundMe campaign to help her raise three-quarters of her costs ($15,000) to participate in the expedition.

If you’d like to contribute, go to www.gofundme.com/breezyseas. The deadline is Friday, June 1.

You can also donate through PayPal at www.paypal.me/breezyseas.

The 30-year-old Portsmouth resident goes scuba diving year round in this area, has spent plenty of time in Canada and has taught snowboarding all around the country. As a child growing up in New England, she wasn’t allowed to stay inside playing video games, even during the winter months.

“We stayed outside, from sunup to sundown,” she said.

So when Ms. Grenier posed in a bikini at the North Pole during a 2016 expedition aboard a nuclear icebreaker, it was no big thing, she insisted.

“I just wanted to say I did it,” said Ms. Grenier.

Now the ocean scientist, explorer, educator, Coast Guard veteran, tourism business manager and scuba instructor —  a regular “Jane of all trades,” as she describes herself — is preparing for her greatest adventure yet.

Ms. Grenier is one of the newest members of the Sedna Epic Expedition, an all-women team comprised of ocean explorers, scientists, artists, educators, adventurers and medical and scuba diving professionals from this country, Canada and Mexico. The multi-year project studies climate change through snorkeling and diving and takes place in Canada and Greenland’s High Arctic.

The team brings its innovative outreach program to Inuit communities in the Arctic while focusing on health, wellness, environment and empowerment issues. Many of these indigenous peoples suffer from intergenerational trauma that manifests itself in poor health, drug and alcohol abuse, poor education, poverty and high teenage pregnancy and suicide rates, according to Ms. Grenier.

“The focus is young women and girls but in all honesty when we go to these isolated communities, we’re there for everyone,” Ms. Grenier said.

Team Sedna’s ultimate goal is to complete a world record-breaking, 3,000-kilometer (1,864-mile) snorkel relay of the Northwest Passage in 2020 to raise global awareness of climate change.

“There will always be one to two women in the water,” Ms. Grenier explained, noting that the length of time each participant will be submerged will depend on the location, currents and elements. “They may go for an hour each, or as far as they can. Maybe they’ll go 100 feet, maybe they’ll go three miles. It’s in hyperthermic water, so there are safety precautions.

“Our youngest are in their early 20s; there’s no age limit to how old you can be. It’s really more about if you can physically stand the Arctic environment and the snorkeling,” she said.

As sort of a warmup, Team Sedna will be conducting a 14-day expedition in August to study the impacts of global warming in the Arctic. The trip will include a visit to Inuit communities in Nunavut —Resolute Bay and Pond Inlet and in Western Greenland.

The trip this summer “is just to prove that we’d be able to do this,” said Ms. Grenier, who’s raising money for the journey since all volunteers must pay their own way. (See related story on how you can help.)

It will be Ms. Grenier’s third time above the Arctic Circle, as she’s had that opportunity with the Coast Guard before. “I’ve done polar and ice diving, but this is my first time in the Expedition,” she said.

“He was working as a teacher on Block Island, and on his last day before moving back to the mainland, I met him on the ferry. You think you meet everyone on the island and you don’t,” she said. The couple lived in Newport before moving to Portsmouth almost a year ago.

Ms. Grenier, who’s not one to sit still for very long, believes true knowledge comes from traveling. She’s been to all 50 states, six out of seven continents and four out of five oceans.

She actively encourages more girls and young women to also explore the world — maybe even join Team Sedna someday. “I’ve been going around speaking at schools all around Southern New England and trying to not only inspire girls and children in general, but to create a connection between them and the Northern Inuit communities in the Arctic Circle,” she said.

When she speaks to young audiences, she stresses the importance of perseverance. “There are hundreds of things I’ve applied to and I’ve been told ‘no’ plenty of times, but it’s never discouraged me,” said Ms. Grenier. “I don’t have a full-time job because I keep being told I’m overqualified, so I create my own work and my own opportunities.”

She also emphasizes that even if you’re from a small town, there are plenty of opportunities to join expeditions — and to make a difference in the world.

“This is about environmental management and climate change. This is going to be their problem to correct,” she said.