PORTSMOUTH — Nicholas Quigley was walking through a preserve one day when he heard a “chorus” of different species of birds fluttering by. 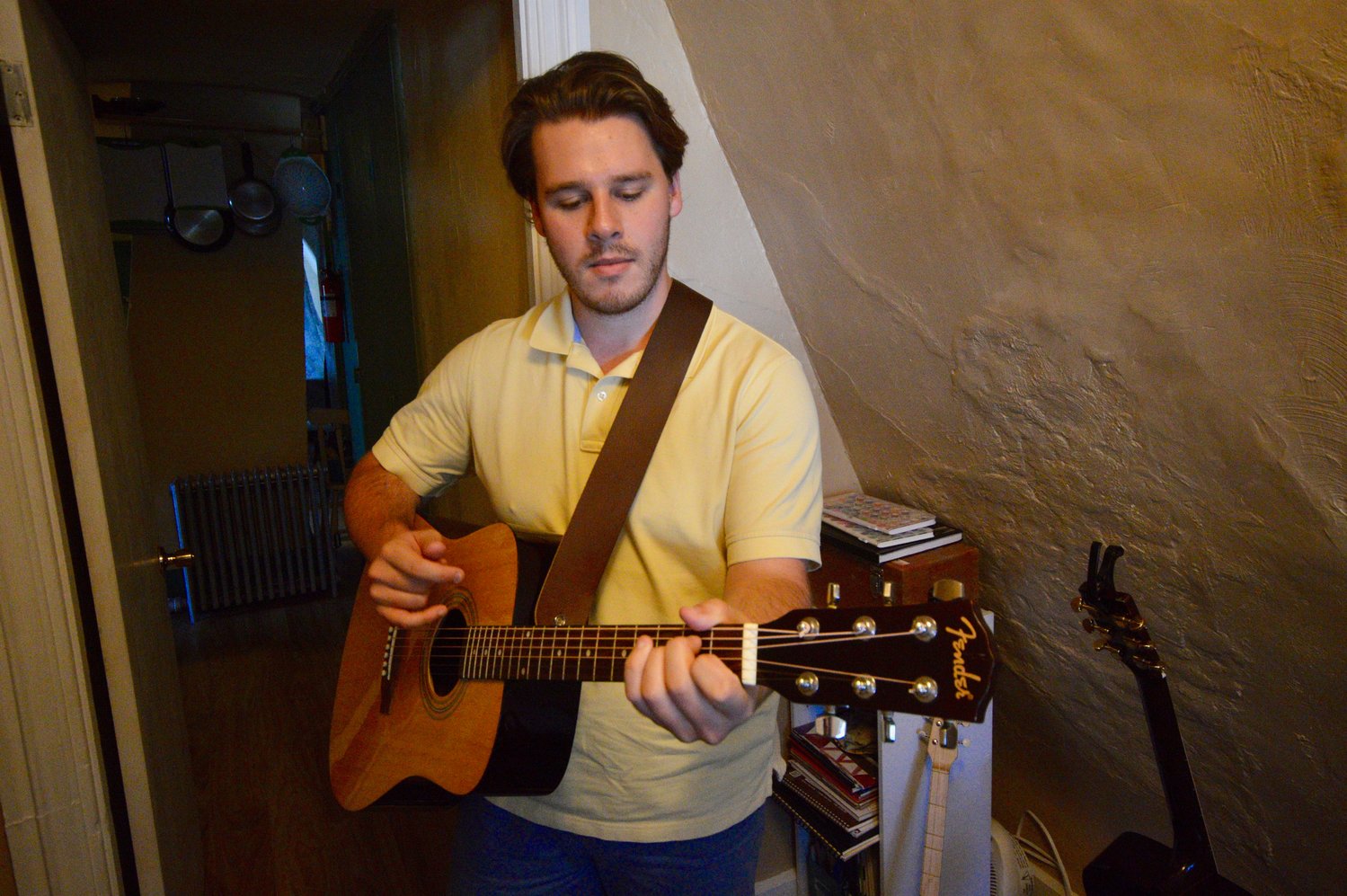 Nicholas Quigley plays acoustic guitar in his apartment’s tiny music studio that’s crammed with other instruments. He used guitar as a counterpoint to nature sounds he heard during a walk at Gooseberry Island in Massachusetts.
JIM MCGAW 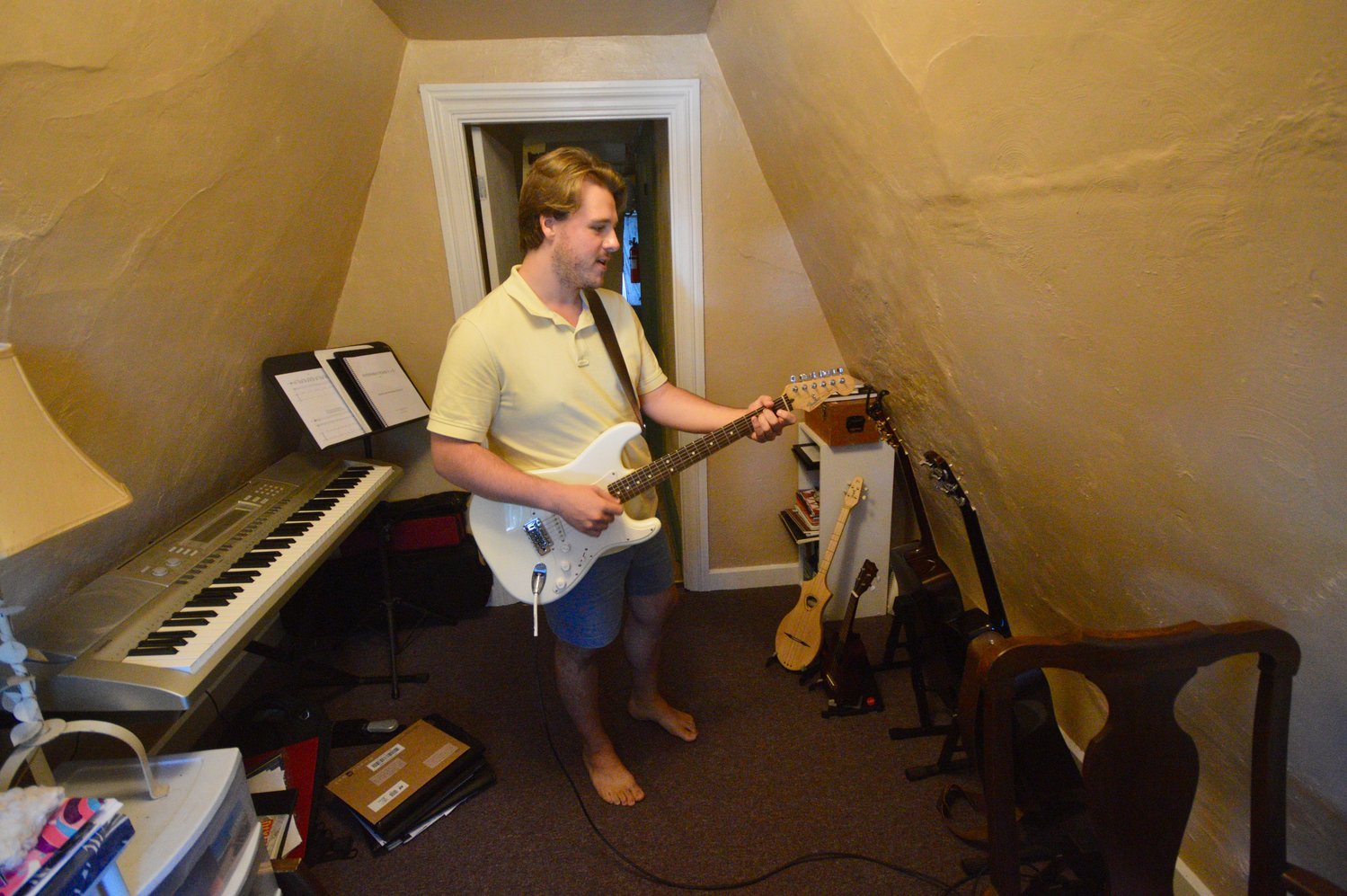 Nicholas Quigley plays electric guitar in his apartment’s tiny music studio that’s crammed with other instruments. He used guitar as a counterpoint to nature sounds he heard during a walk at Gooseberry Island in Massachusetts.
JIM MCGAW 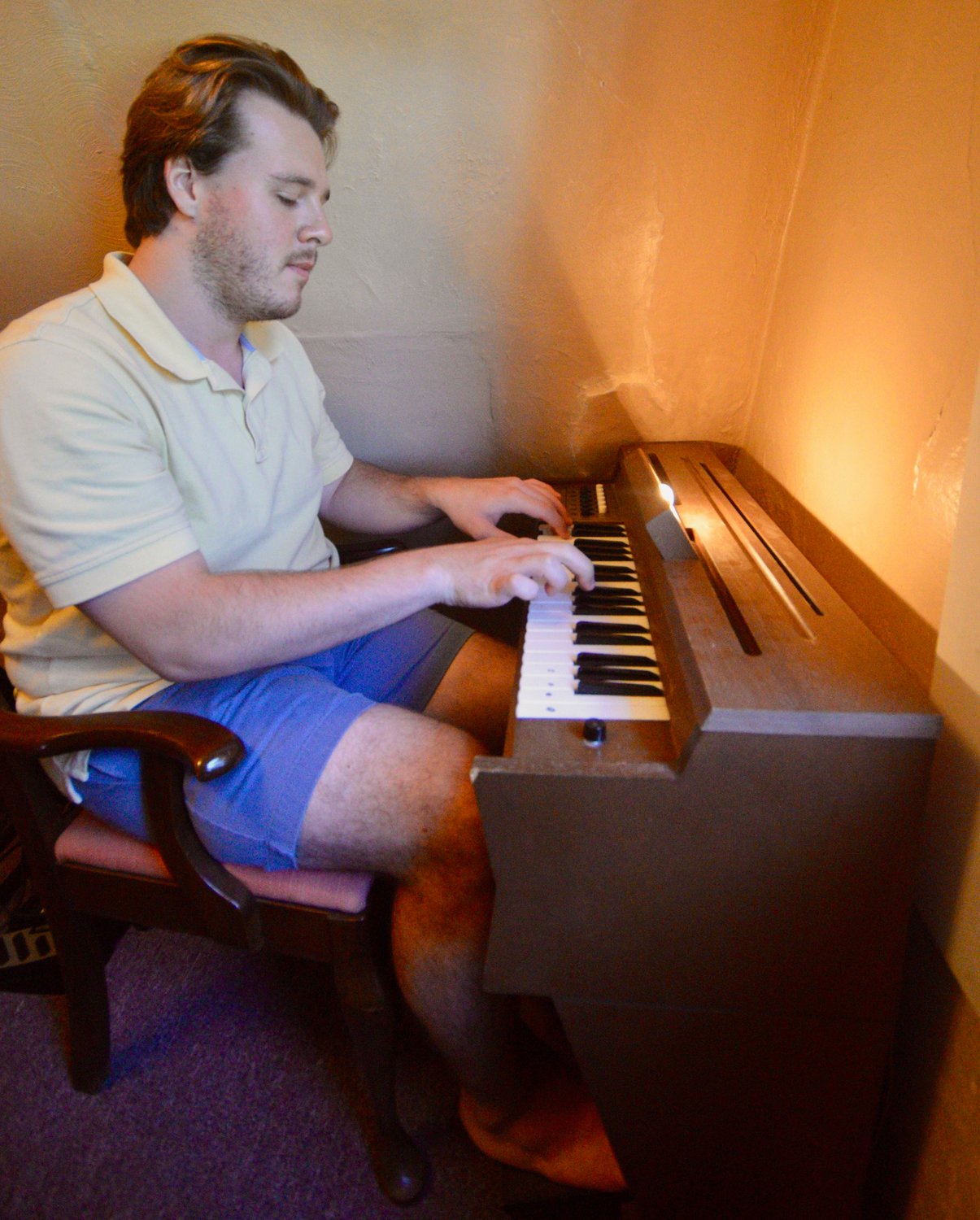 Nicholas Quigley, who teaches music to grades 5-8 at Atlantis Charter School in Fall River, plays a vintage chord organ at his Bristol Ferry Road apartment last week. The instrument, a smaller version of a regular organ, was popular in the ’60s and ’70s.
JIM MCGAW
Previous Next
Posted Thursday, August 1, 2019 1:21 pm
By Jim McGaw

PORTSMOUTH — Nicholas Quigley was walking through a preserve one day when he heard a “chorus” of different species of birds fluttering by.

“It acted like sort of a counterpoint in music,” said the 25-year-old composer and music teacher during an interview at his Bristol Ferry Road apartment last week. “It was obviously not made with that intention, but it was interesting to start to have that frame of mind around it.”

It got him to thinking more about how music composition should be defined. Mr. Quigley had been composing music since high school, continuing to write pieces for his undergrad and graduate music theory assignments. (He earned his bachelor’s degree in music business at UMass Lowell, then a master’s in music education from Boston University.)

He was never afraid to be somewhat daring when it came to composition and instrumentation. For his second album, he wrote a piece for viola (one of his main instruments), two metronomes and two tuners. He established a rhythm on one metronome, a different beat on the other, with the tuners making two-part harmony.

“It was basically a little chord for the viola to play around,” he said. “Someone else may have done it, but no one that I’m aware of. A piece for a literal metronome and tuner was meant to be a little cheeky — using these things that are meant for just the practice room.”

But it wasn’t until he really started opening his ears during those nature hikes that he got the idea of recording soundscapes and overlaying his own music as sort of a counterpoint.

It may all sound a little new age-y and not for every listener, but his project isn’t just about music. It’s also a call to action — a plea to protect natural areas that humans are increasingly encroaching upon.

As Mr. Quigley said in describing his latest release, An Arts-Based Response to Various Pollutions on Gooseberry Island, Mass., “So many amazing creatures and natural sounds were heard, but they were sometimes taken over by human-generated sounds. The sound art and musical components of the record were composed and improvised to capture, accompany, and reflect upon both the beauty and anxiety I experienced in the space.”

The album is available for download on Bandcamp, Spotify, Apple Music and Amazon Prime, and an accompanying video can be viewed on YouTube and at www.nicholaspquigley.com.

Mr. Quigley originally intended his soundscape to be a “light” project — merely capturing the pleasing sounds of nature. “One day I was at Gooseberry, not with the intention of recording. As I was walking around, I realized how rich the sound was,” he said.

But he also heard and saw other things during his nature walks: airplanes buzzing overhead, trash on the ground, an abandoned boat and its contents washed up on shore.

“And then I sort of realized that this is a problem that has to be addressed,” he said.

The project is inspired by Bernie Krause, a Californian musician and soundscape ecologist who has been recording and archiving natural soundscapes since the ’60s. Mr. Quigley saw Mr. Krause’s “Ted Talk” lecture about a project that exposed the ecological impact of “selected logging” in his home state.

“It was supposed to have no environmental impact,” Mr. Quigley said. “If you look at photos, before and after, the woods actually look the same somehow. But if you listen to his soundscapes, you hear there are so many bird that are no longer calling. By using soundscapes, you can get a much fuller picture of the health of an ecosystem.”

Mr. Krause also talked about a colony of frogs he recorded, and how it became “out of synch” due to airplanes pervading its habitat. Animals “rely on the sounds they are making” to survive, Mr. Quigley pointed out.

“You can’t see it in an image, but you can hear it very clearly in before-and-after soundscapes,” he said. “That what I was trying to do — document what is currently there — and lay the backdrop of what I felt was the beauty there, but also my anxiety of us not protecting it well enough. What happens if certain laws or restrictions are eased that will benefit corporations more?”

Using an iPhone equipped with a $150 Shure plug-in microphone that dramatically improved the fidelity of his recordings, Mr. Quigley captured some soundscapes on July 19 while walking around Gooseberry Island, also known as Gooseberry Neck, off the coast of Westport.

“I think the recordings came out very nice,” he said. “There are times when you’ll hear the natural panning of a bird that starts calling in one area and then changes direction.”

Of course, he doesn’t yet have an “after” recording of Gooseberry; that will have to wait. “What if I choose to redo this album when I’m 50 years old — what if it’s very different?” he said.

Mr. Krause often collaborated with other composers in incorporating music with soundscapes. Mr. Quigley did the same, using his own guitar compositions.

“The music is all for guitar and guitar pedal, which is probably the instrument I’m best at,” he said.

He took great pains to getting the soundscape to match his music. “One of my favorite parts is when the entrance is ending and the delay counterpoint for birds come in. I was sort of trying to capture the ‘ping pong’ of the birds in different areas.”

Mr. Quigley said he wasn’t trying to demonstrate that nature creates its own music.

“I definitely use certain recordings as counterpoint, essentially, especially for the wildlife sequence,” he said. “The way I played the guitar was meant to go really well with these bird calls. For quite a bit of it, it’s me tapping out a bass line, and the bird calls could fill in the other part essentially.” He likened it to a jazz musician responding to another band member when improvising a musical phrase.

Mr. Quigley doesn’t intend to get rich on the sales of his album streams. He knows only a selective audience will be interested — perhaps people who are into “contemporary classical” or ambient music, he guessed.

Mr. Quigley said he hopes to continue his soundscape projects, perhaps creating one in his new hometown (he moved here from Fall River in February). He’s particularly intrigued by Pheasant Point Beach on the west side, only a walk away.

“There are some really incredible birds that live in this marshy area,” he said. He also loves the sounds of buoys and foghorns, the latter of which he loved to fall asleep to during his time in Fall River. ”I thought about incorporating that into a piece eventually.”

For more information about Nicholas Quigley and his music, visit www.nicholaspquigley.com.