PORTSMOUTH — Gary Crosby, who as town planner has been the key figure in guiding Portsmouth’s growth and development over the past 18 years, is retiring at the end of the fiscal … 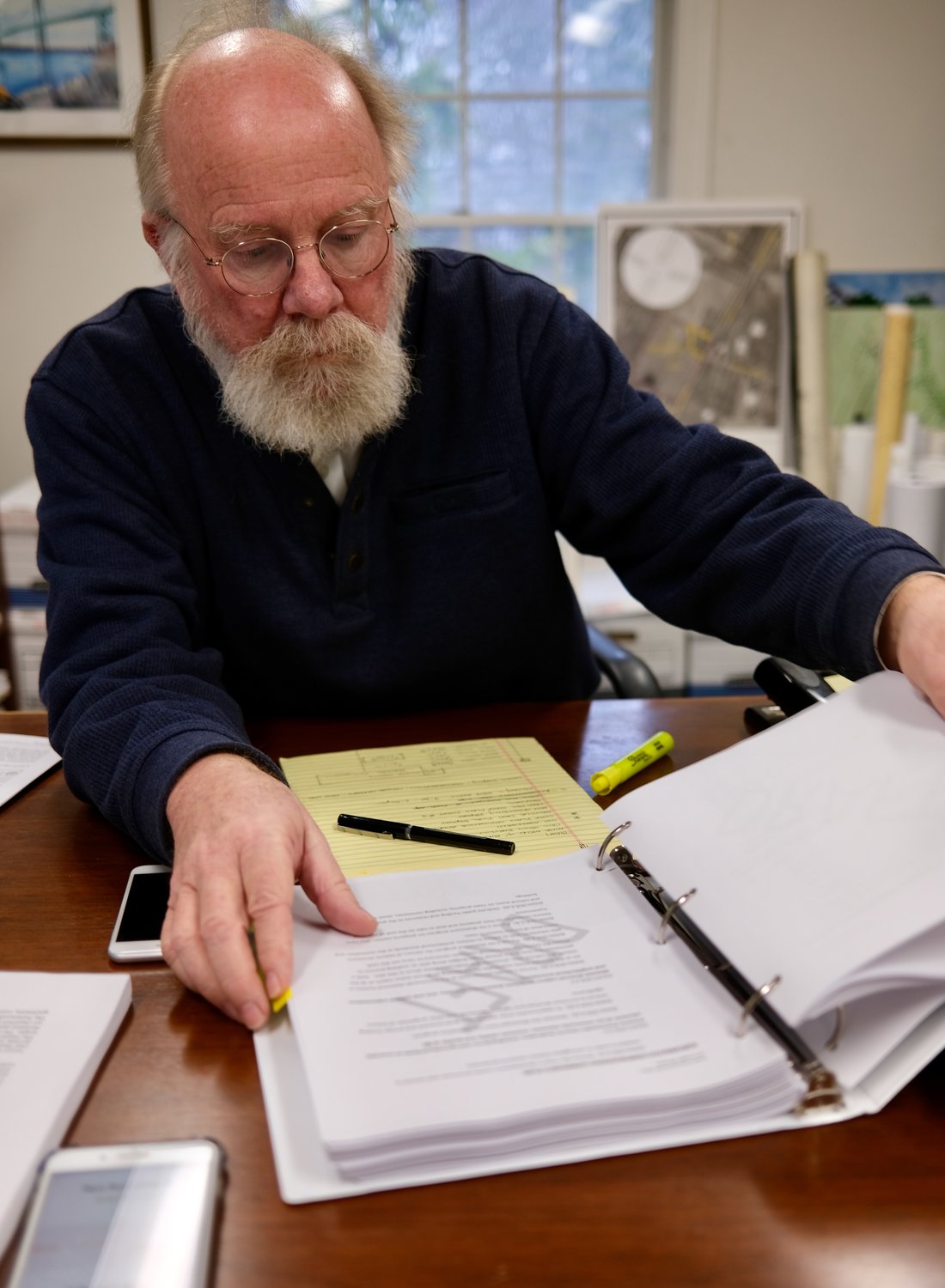 Town Planner Gary Crosby, here thumbing through the draft of the Comprehensive Community Plan, has announced his retirement at he end of the fiscal year, after 18 years of service.
JIM MCGAW 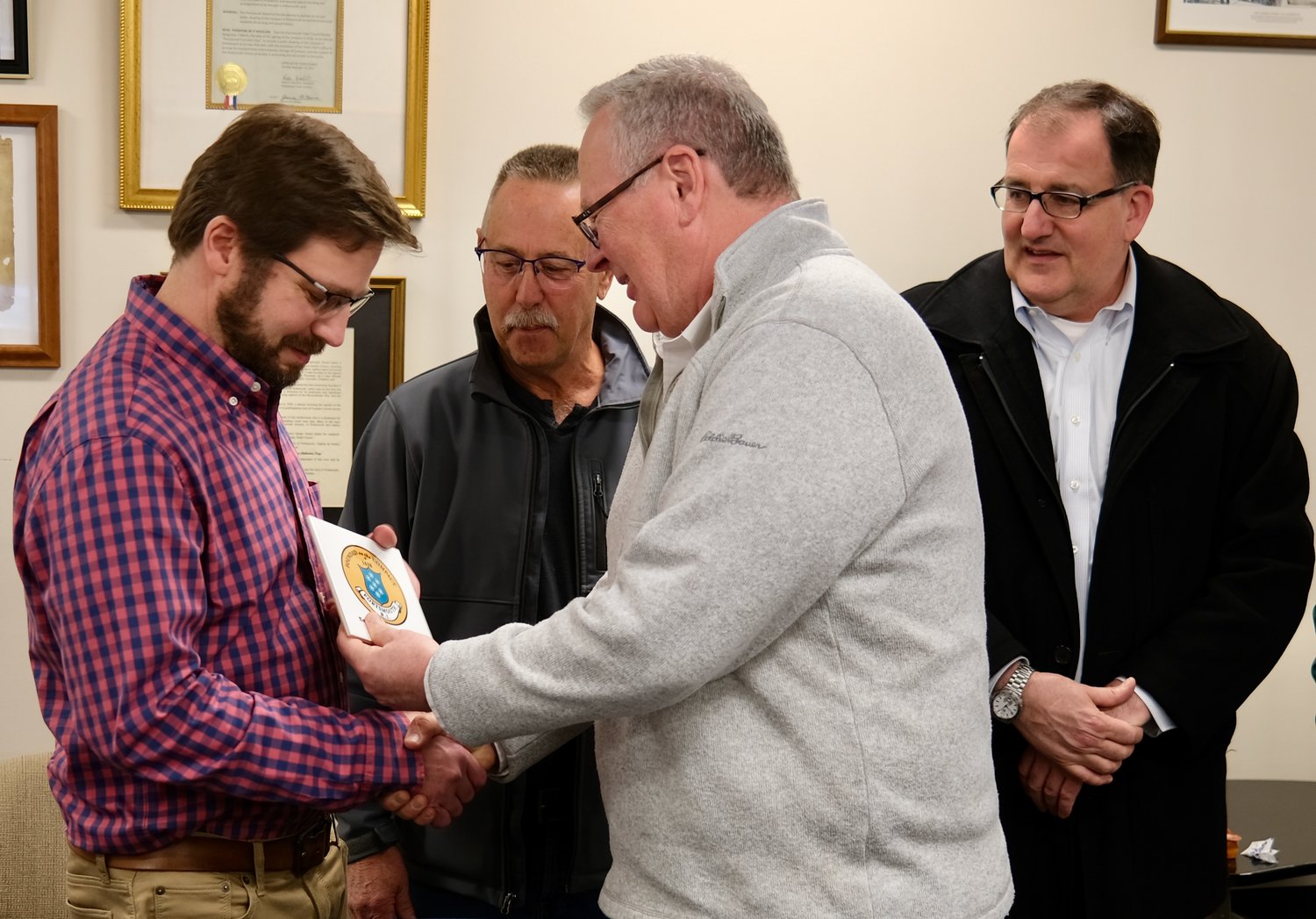 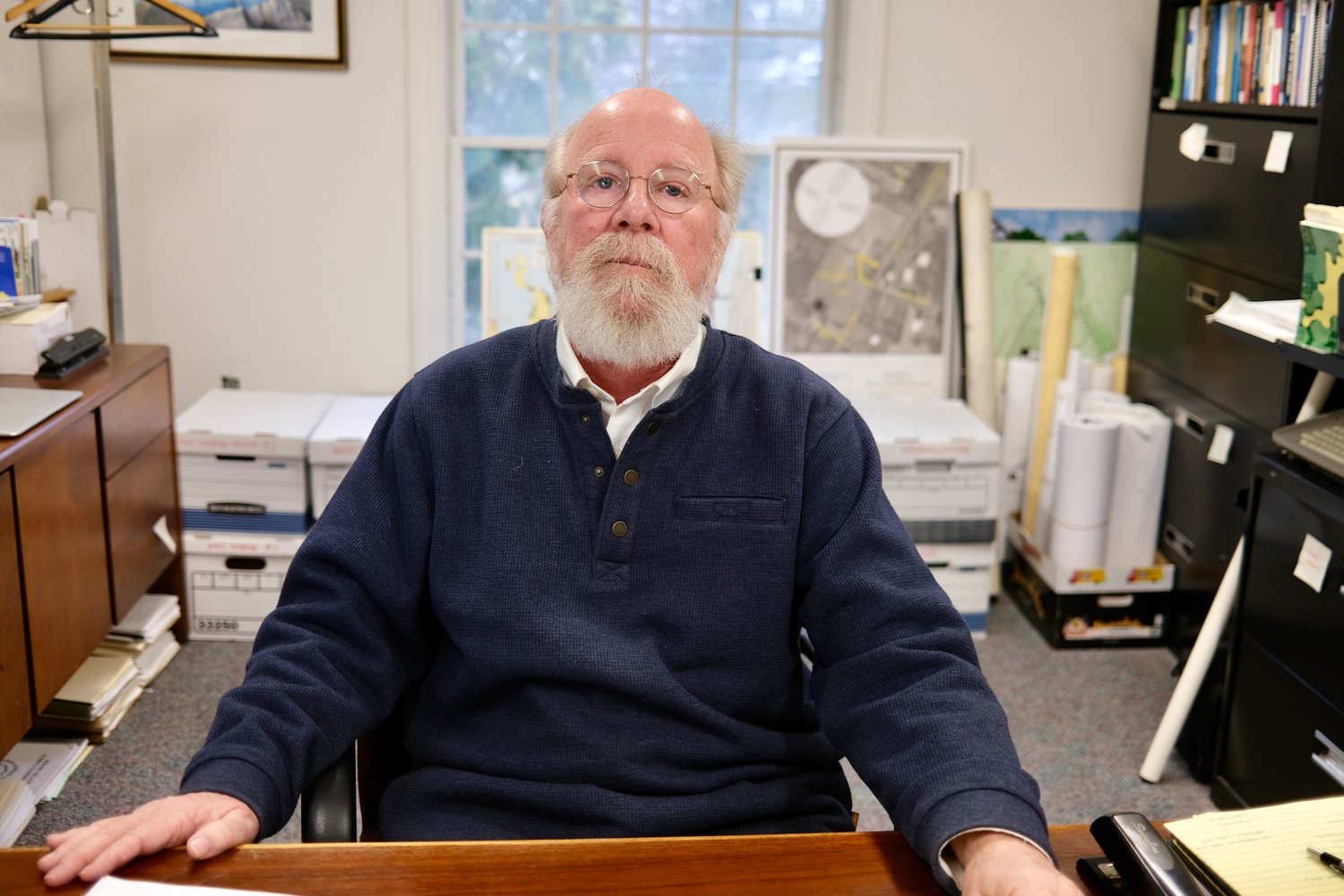 Town Planner Gary Crosby said he’s most proud of his work on the town’s Comprehensive Community Plan, as well as plans dealing with hazard mitigation and wastewater.
JIM MCGAW 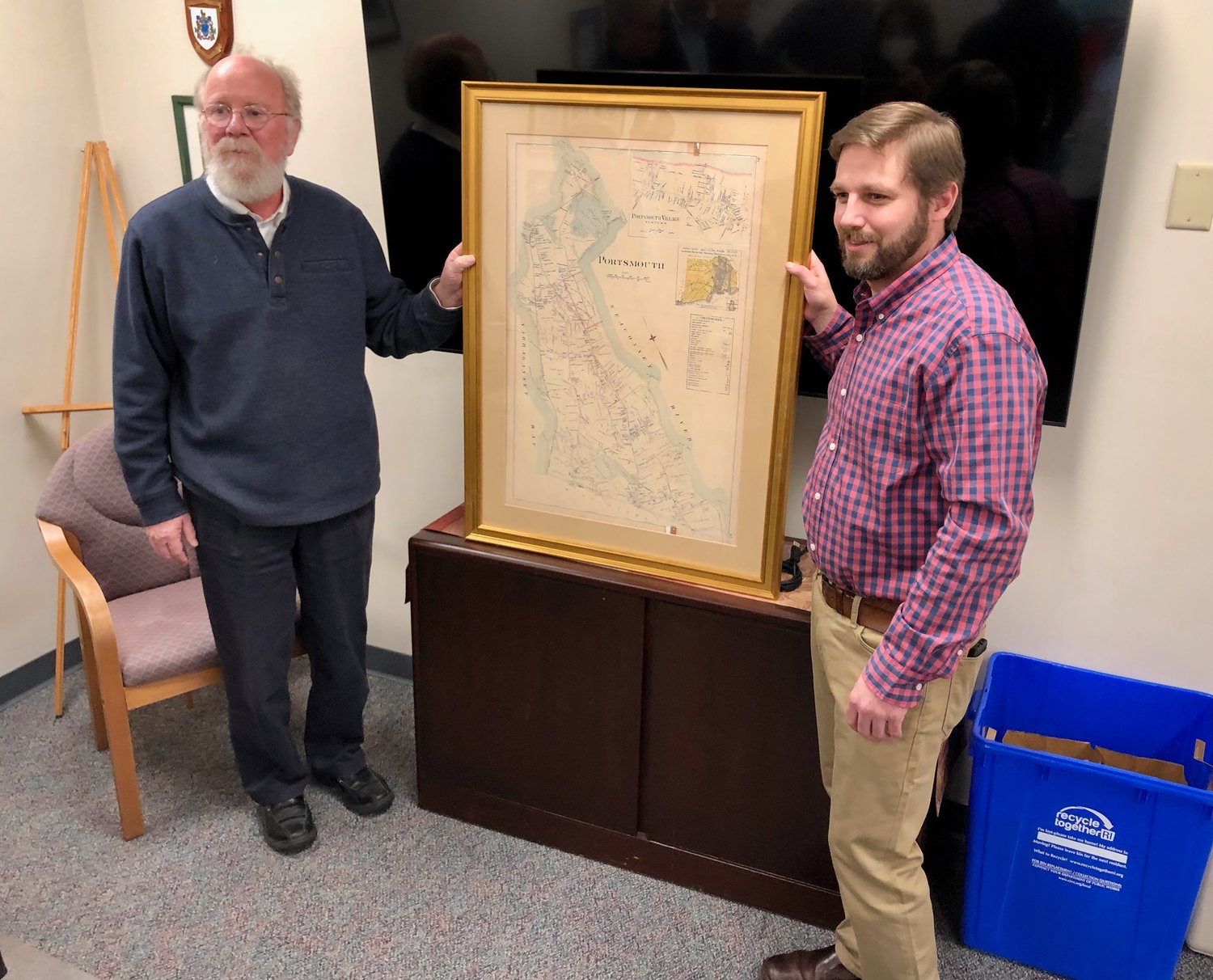 Town Planner Gary Crosby (left) and Assistant Planner Mike Asciola pose with a circa 1900-1905 map of Portsmouth that was gifted to Asciola, who’s taken a planning job in New Hampshire.
JIM MCGAW
Previous Next
Posted Monday, April 4, 2022 8:29 pm
‘Immeasurable’ contributions to the town

Various town officials paid tribute to both Crosby and Asciola, the latter of whom was fêted with an informal going-away party at Town Hall last Thursday because Friday was his last day.

“For the past eight, nine years in zoning, you’ve been tremendous as far as I’m concerned. You’ve kept Portsmouth clean and green,” local resident and developer John Vitkevich told Aschiola. Vitkevich organized the gathering in the upstairs Portsmouth Room, and brought along coffee and ice cream cake.

Town Council Vice President Linda Ujifusa, who attended the gathering, added, “Gary has worked hard on many important initiatives to maintain and improve Portsmouth's quality of life. We all appreciate his years of dedicated service to our town."

“It’s been immeasurable,” Planning Board Chairman Edward Lopes Jr. said of Crosby’s contributions to the town. “We’ve spent almost two and a half years putting together the Comprehensive Community Plan, and both Gary and Mike were instrumental. (Gary) did all that while he was doing his regular job. Although we have a Planning Board secretary, we still rely on the expertise of Gary and Mike on many of the Planning Board petitions. We’re going to miss that; we’re basically losing both of them at the same time. It’s going to be tough.”

Jim Nott, chairman of the Zoning Board of Review, said Asciola’s contributions to his board have been invaluable.

“I don’t think anyone here, except for Gary, what Mike did for our board,” Nott said. “We were hard-pressed to replace George Medeiros as far as zoning went, and then Mike came along and filled those shoes and took it to another level actually, at least for us. It made preparing for meetings so much easier.”

DPW Director Brian Woodhead said he was sad to see Crosby go at the end of the fiscal year.

PORTSMOUTH — Gary Crosby, who as town planner has been the key figure in guiding Portsmouth’s growth and development over the past 18 years, is retiring at the end of the fiscal year.

“After 18 years, I think it’s time to go,” Crosby said last week. “I’m not leaving under any kind of circumstances. I’m 71 years old and it’s time to retire.”

IN OTHER NEWS: Portsmouth breezes through rest of Comprehensive Plan

He’s not the only member of the Planning Department the town is losing. Assistant Planner Michael Asciola, in fact, worked his last day on Friday and is taking a city planner position in Dover, N.H.

When asked the accomplishment of which he’s most proud, Crosby didn’t hesitate.

“The Comprehensive Community Plan (CCP),” he said during a chat in his second-floor office at Town Hall. “That was my major goal, to get that accomplished. I wanted to do it right. I’m going to be working right up until the very end.”

Development of the CCP, which guides the town’s growth and development over the next 20 years, was a long and arduous process — the culmination of resident surveys and data-gathering exercises, the Citizens Interested in the Comprehensive Community Planning Process Committee, the Planning Board, and town staff, including members of the Planning Department who led the overall effort.

The draft CCP, which the Town Council finished reviewing during the third night of a public hearing on Monday (the entire plan goes to a formal vote on Monday, April 11), is a complete re-write of the current plan approved in 2002.

Crosby’s fingerprints are all over it.

“I like to say when it’s being reviewed and critiqued that there’s no real pride of authorship here. I was responsible for producing a draft, but I am proud of the work,” Crosby said.

There’s been little public comment or input on the CCP, which Crosby said could be interpreted two ways.

“Either nobody cares, or I hit a home run — that there isn’t much in there to critique,” he said.

He slyly added, “I’ve got a few little things in there that no one seems to be catching yet.”

Did he care to elaborate?

“No,” Crosby said with a chuckle.

Besides the CCP, Crosby said he was also proud of getting the town’s Hazard Mitigation Plan updated (2018) as well as a Wastewater Management Plan and Wastewater Ordinance approved (2015).

“Getting that wastewater business settled and heading into the right direction is probably my most successful accomplishment apart from the comp plan,” said Crosby.

The wastewater plan was developed in response to a notice of violation the state issued to the town regarding outdated cesspools and failing septic systems that were deemed a major source of pollution. It included the establishment of a low-interest loan program so that residential property owners could repair or replace failing cesspools and septic systems.

Crosby said grant-writing has also been a major component of the job.

“I joke that I don’t really get to do a lot of planning; it’s mostly public administration,” he said. “I’ve been really quite successful in grant-writing. In fact, I just got word yesterday that we got another one from Rhode Island Infrastructure Bank — $140,000 to redo some inland flooding problems on Riverside Street in Island Park and Founder’s Brook. That I’ll be handing off to my successor.”

Brian Woodhead, director of the Department of Public Works, said Crosby’s efforts in administering grants have been invaluable for his department.

“Gary’s a big help on our end because of all these grants we have,” Woodhead said. “Gary does all the administrative work on the grants, and all the followups. Our department oversees the grants, but Gary does a lot of the paperwork, and that’s a huge part of it.”

Crosby said he’s not sure about his immediate retirement plans.

“I like to tell a story about my father, who retired when he was 55,” he said. “He was with the Southern California Edison company for 35 years. He retired early and kind of floundered around for five, six, eight years — not really knowing what he wanted to do. And then he decided to build a boat, and I think it saved his life, or extended his life because it gave him some focus. I’ll probably pick up some sort of a project like that eventually.”

Crosby and his wife, Judy, already have a boat — a 30-foot Catalina — which they plan on using more. Although they’re not going anywhere right away, they’ve talked about moving to South County to be closer to their 6-year-old grandson. Crosby has two sons: Robin, who works for Schneider Electric in South County (his wife teaches at Portsmouth High School); and Robin, who lives in Pittsburgh and is the Henry J. Heinz II director of Carnegie Museum of Art in that city.

Since he gave the town ample notice, Crosby expects he will have time to train his successor before he leaves Town Hall. “We’re going to have some kind of a mind-meld,” he said, adding he’s informed Rainer of his availability after June 30 if needed.