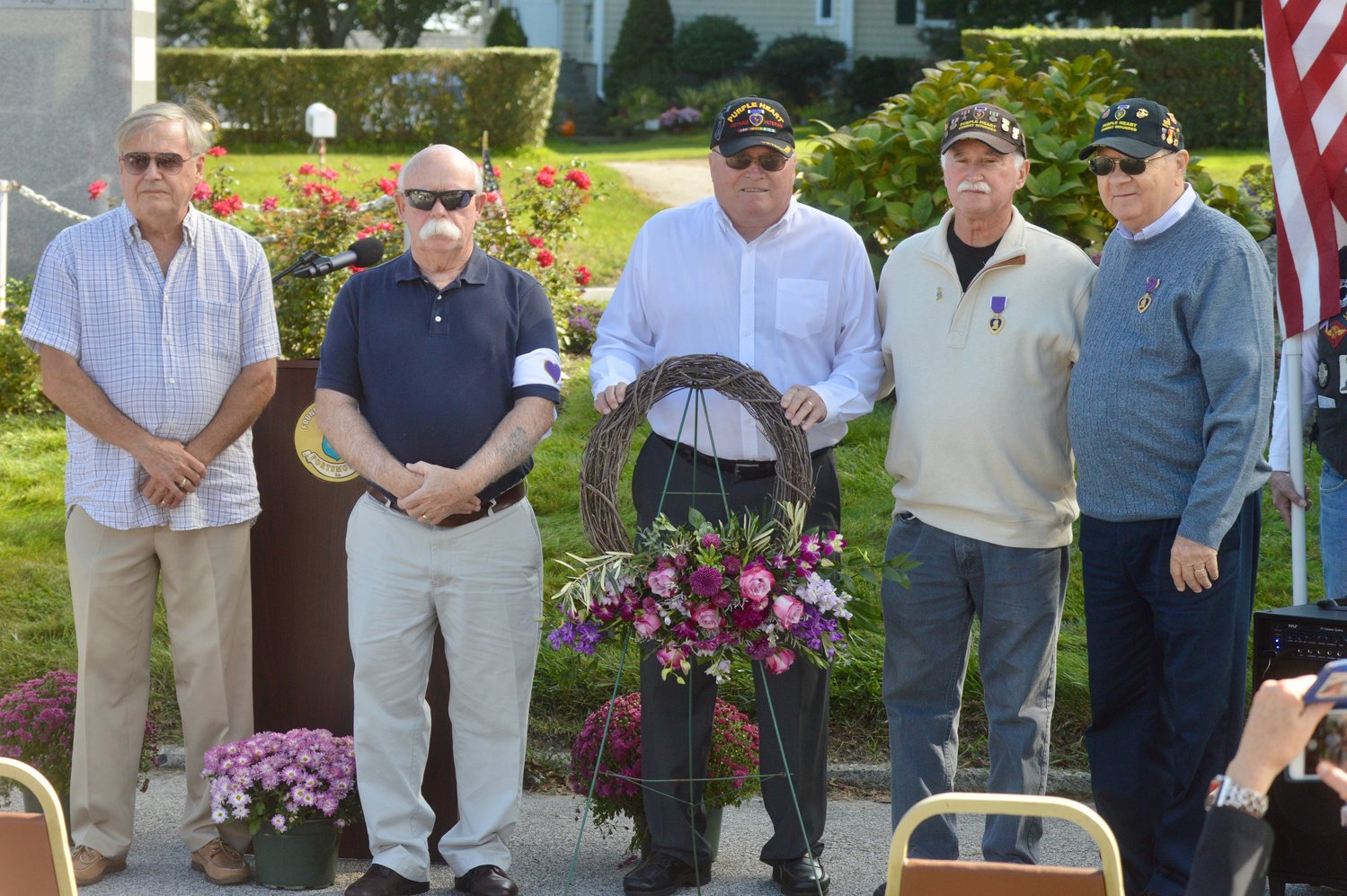 Charles Morin, Bill McCollum, Jeff Fletcher, Frank Grzyb and Ken Garthee (from left) are Purple Heart recipients who were honored during a special ceremony in front of Legion Park Friday morning. Another recipient, Marvin Clements, could not attend.
JIM MCGAW 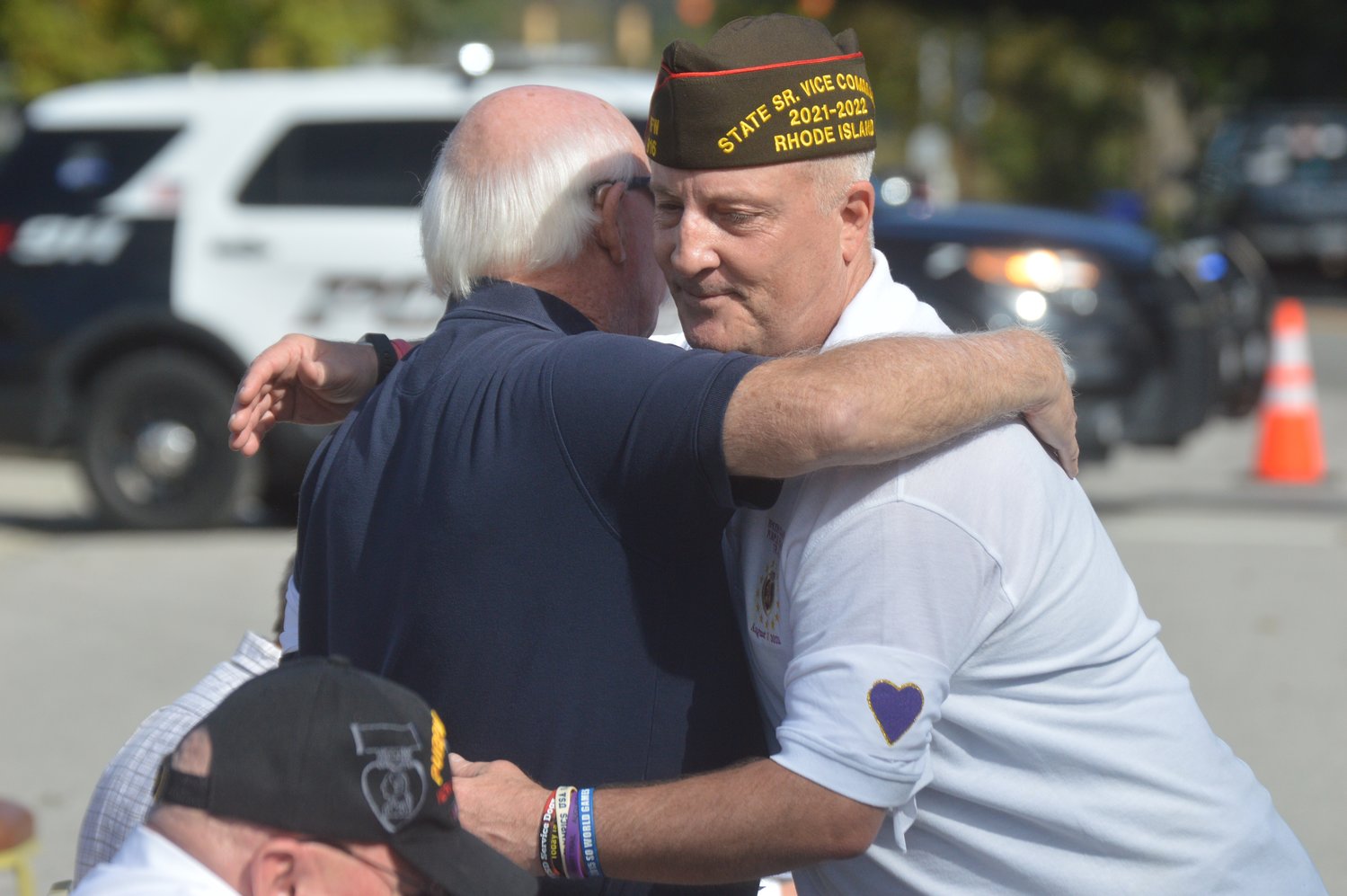 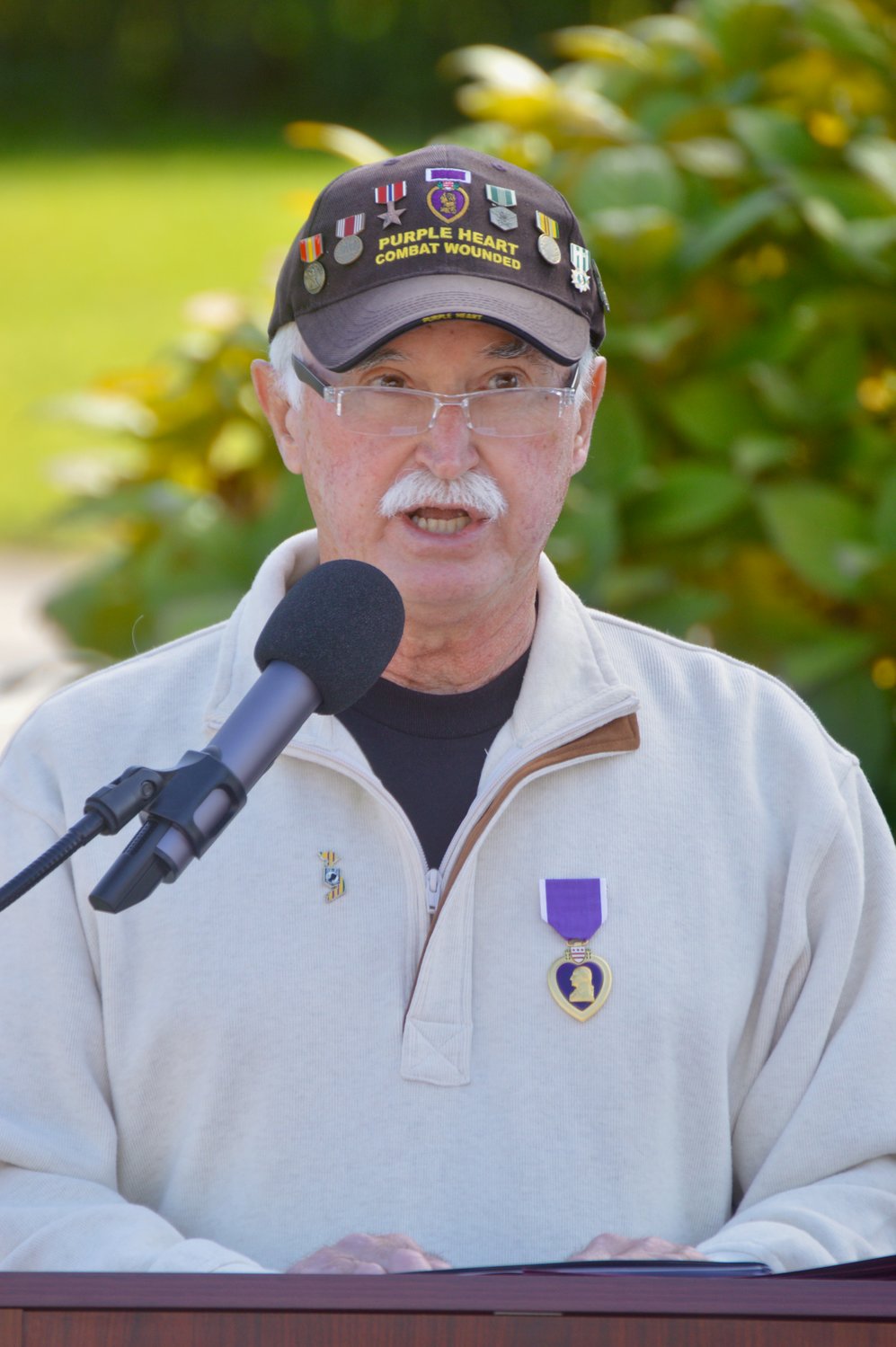 Frank Grzyb, one of six Purple Heart recipients honored Friday, speaks to the gathering of people in front of Legion Park.
JIM MCGAW 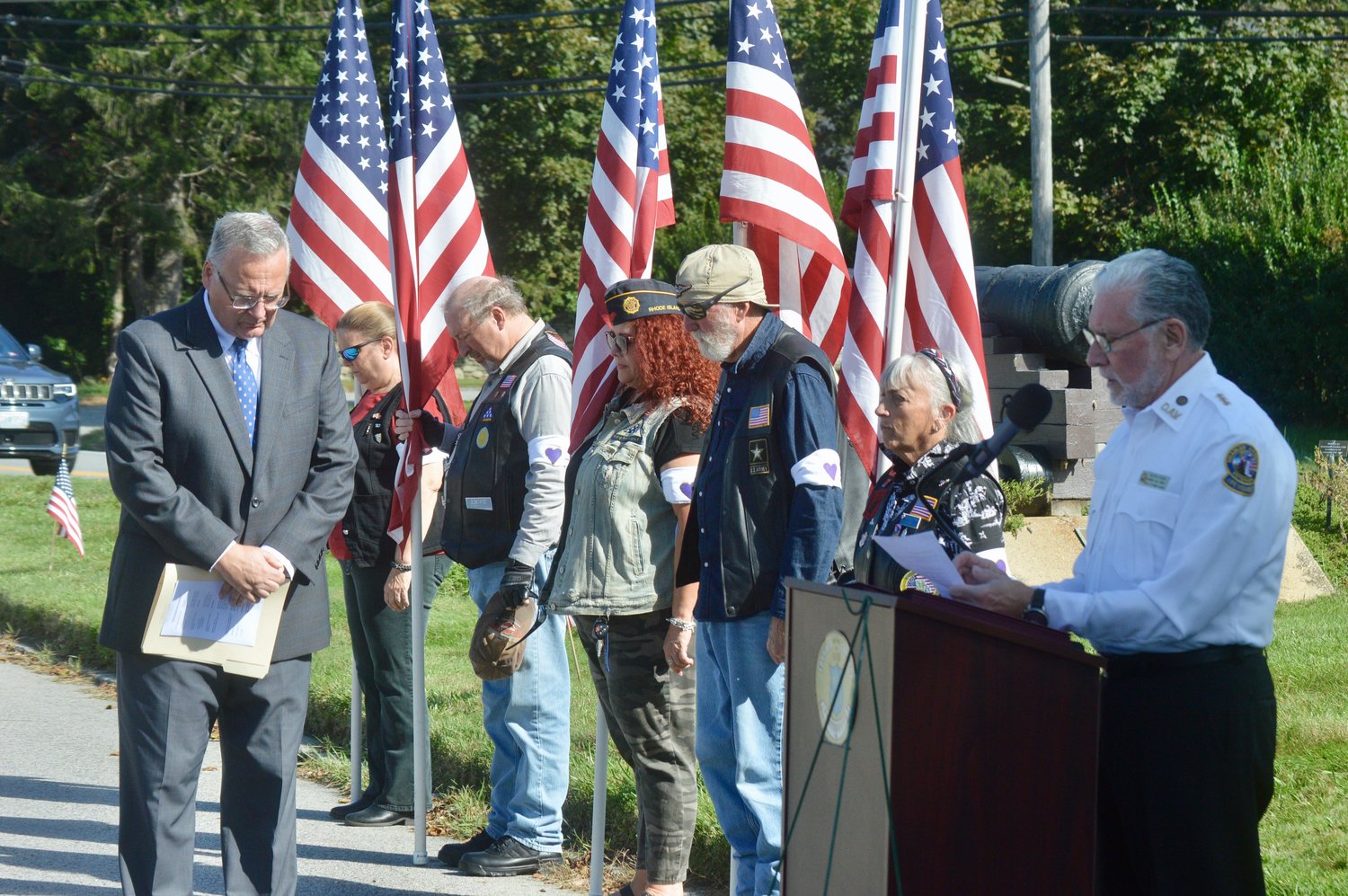 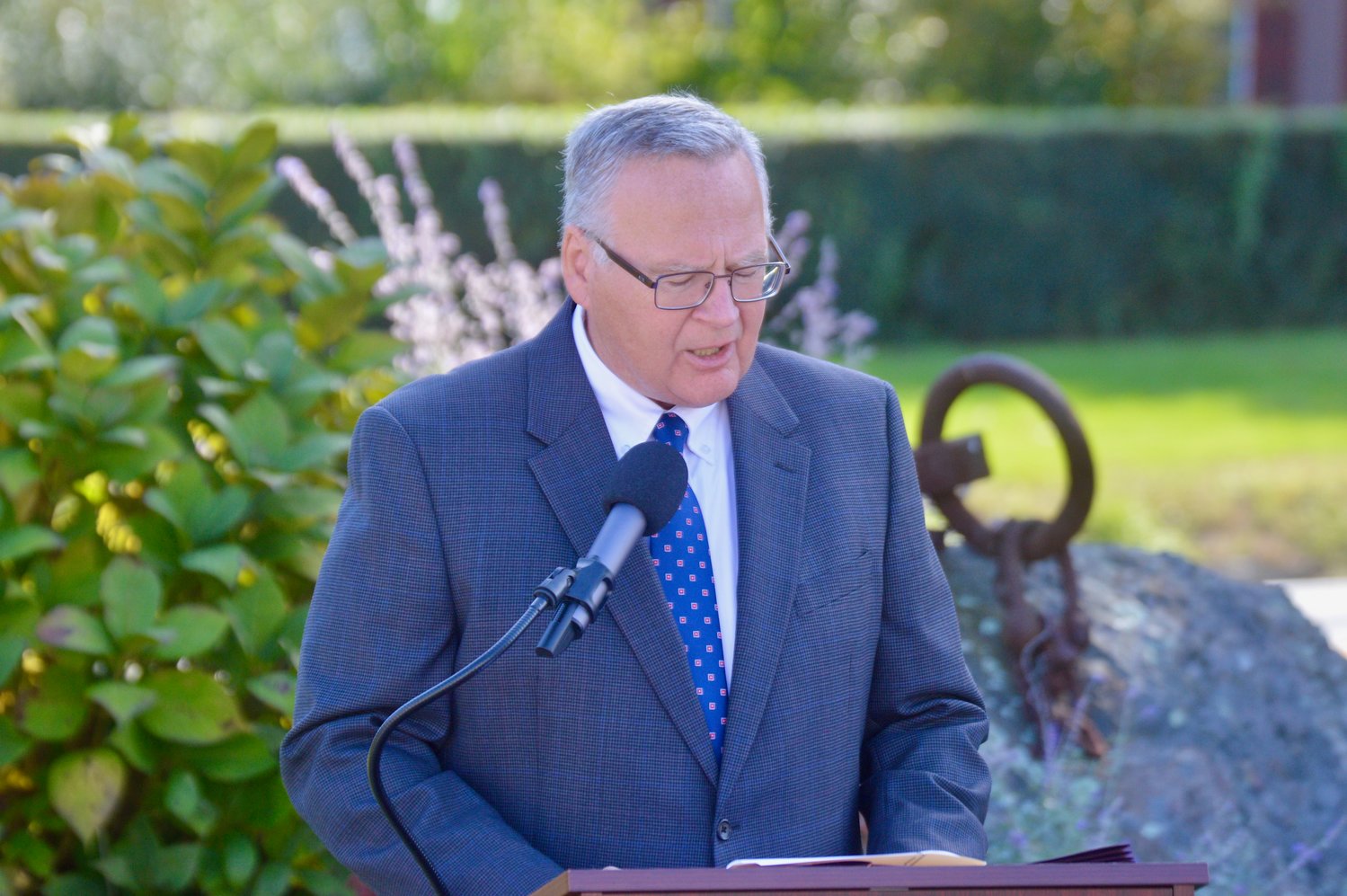 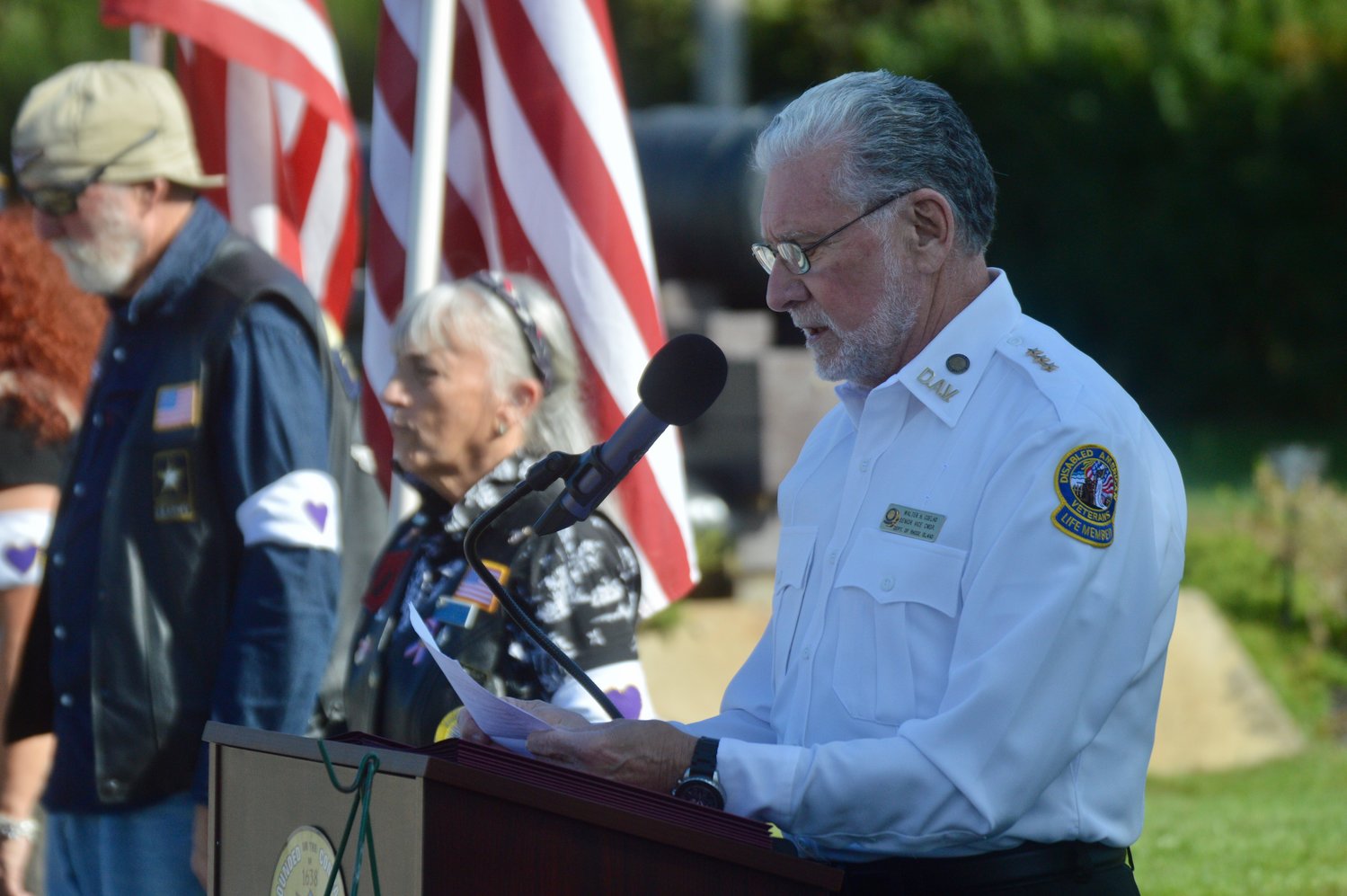 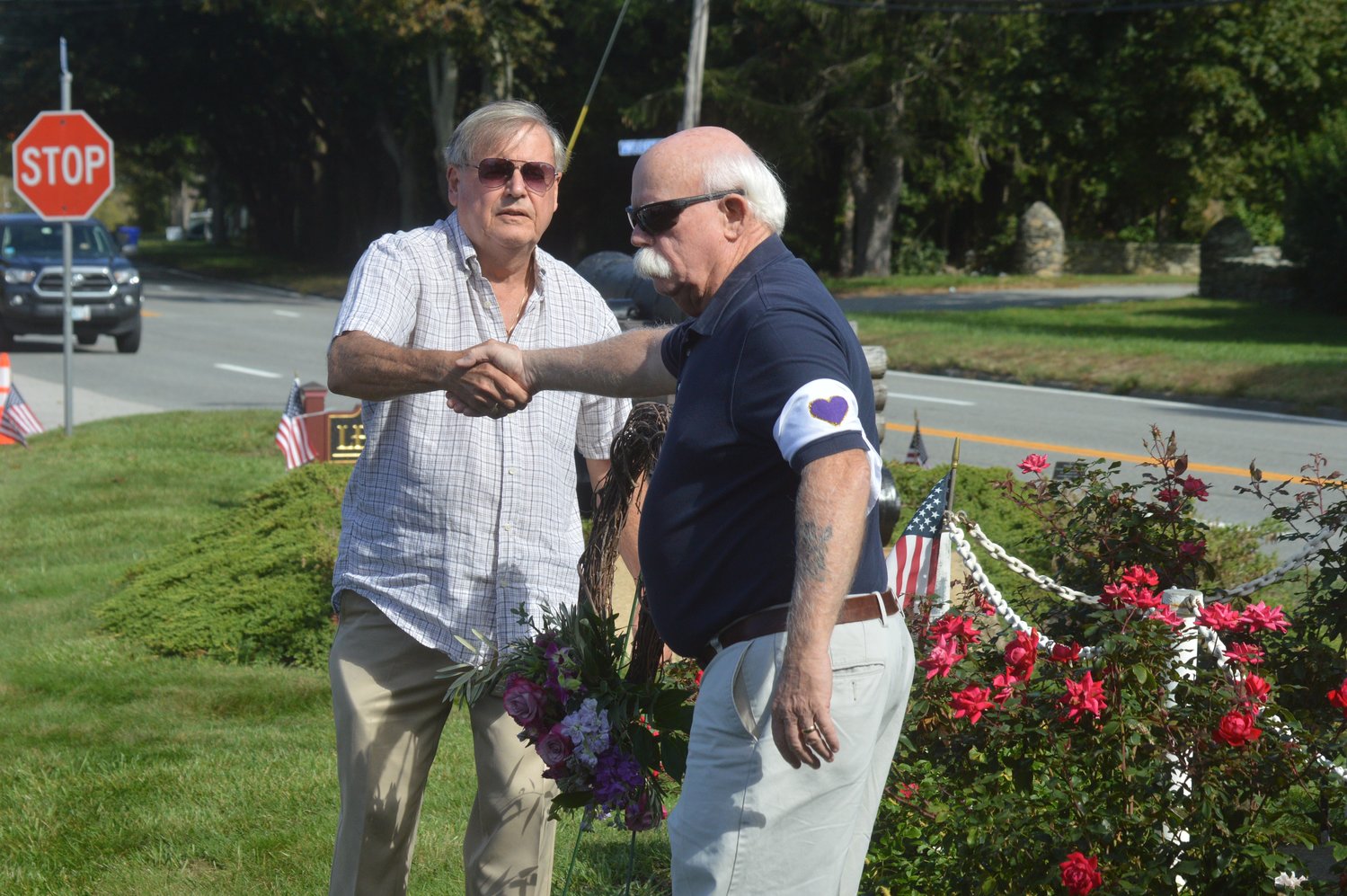 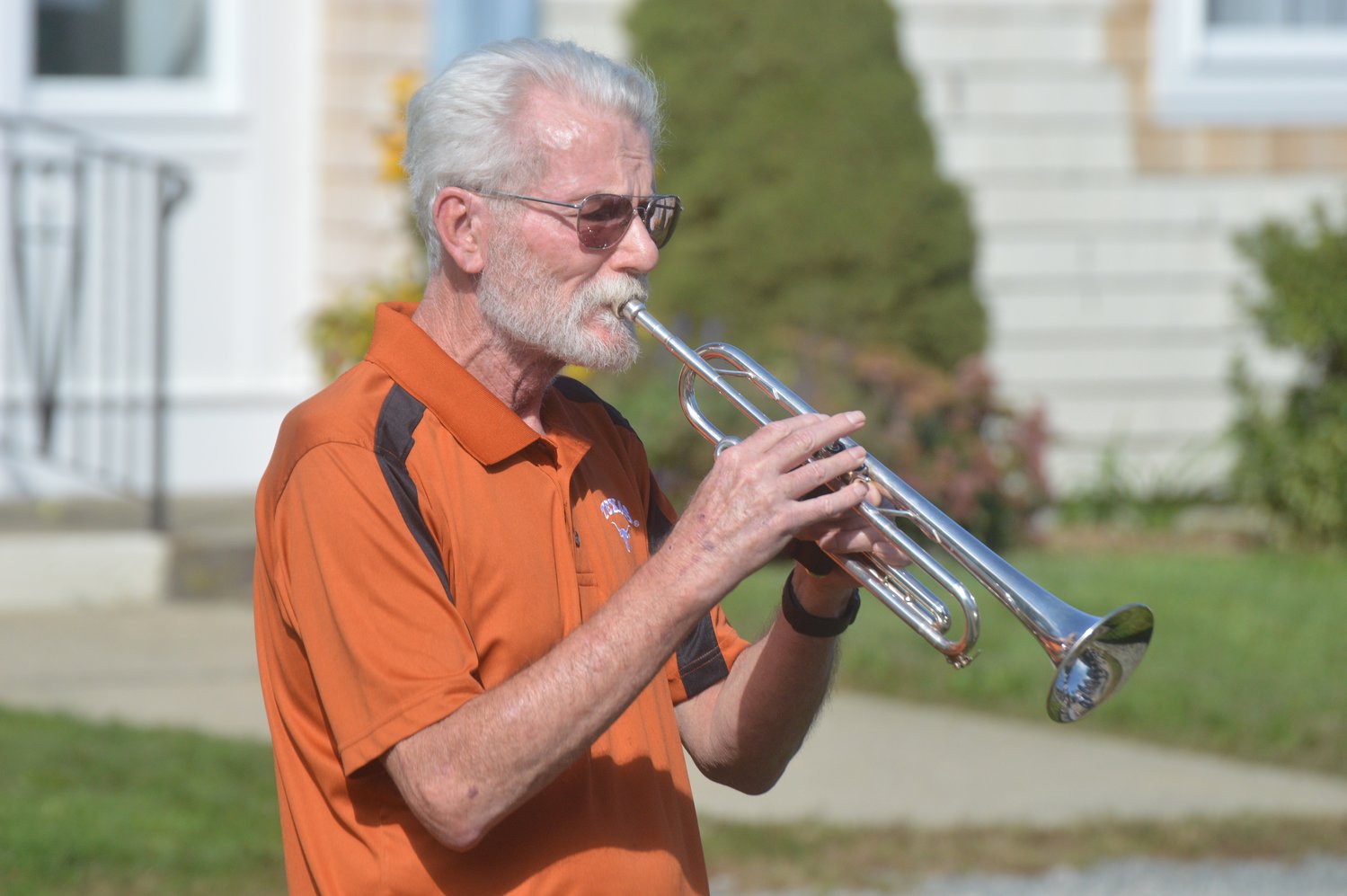 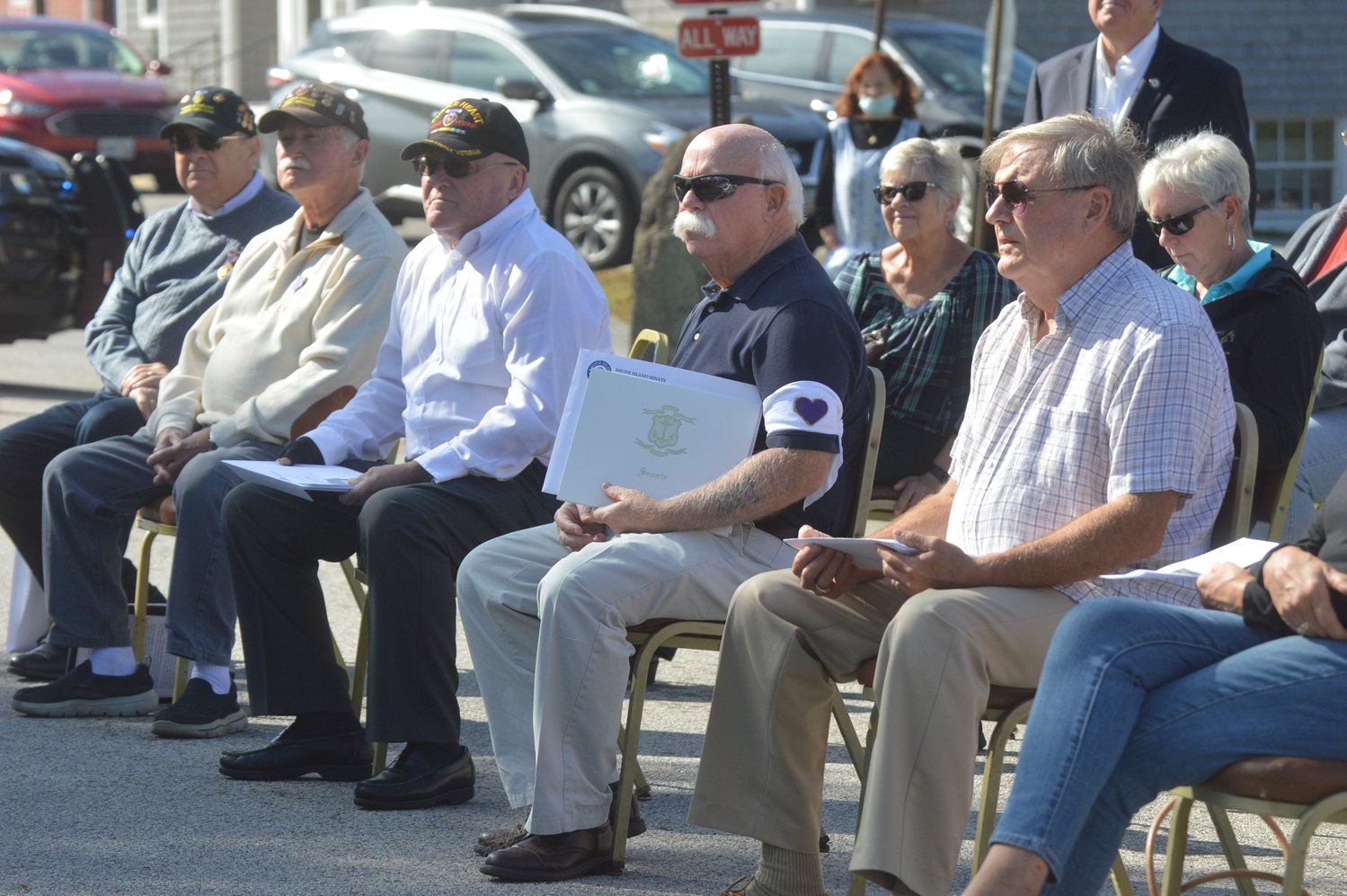 The Purple Heart recipients who were honored in a ceremony outside Portsmouth Town Hall Friday morning were (from left) Ken Garthee, Frank Grzyb, Jeff Fletcher Bill McCollum, and Charles Morin. Another recipient, Marvin Clements, is not pictured.
JIM MCGAW 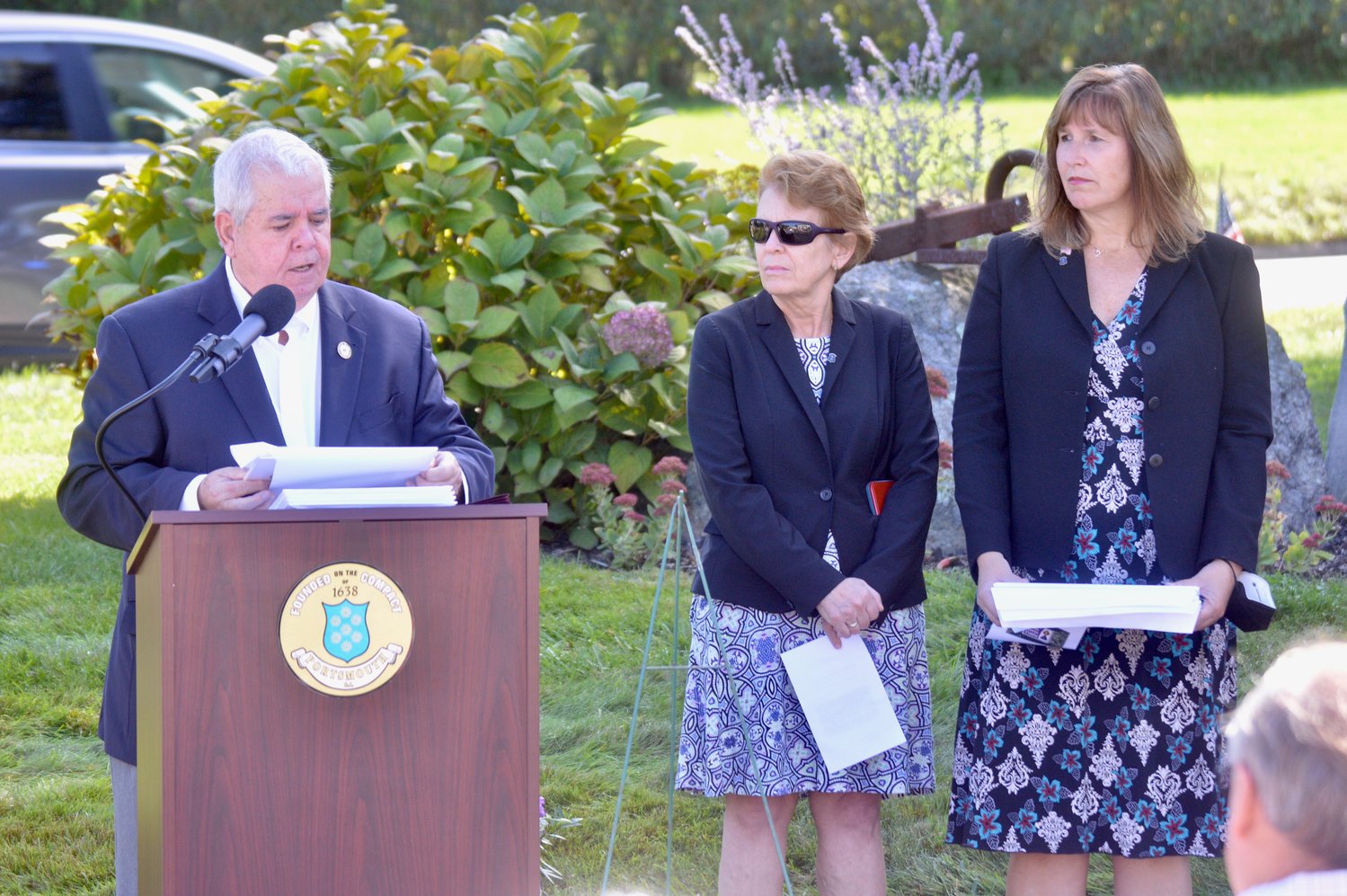 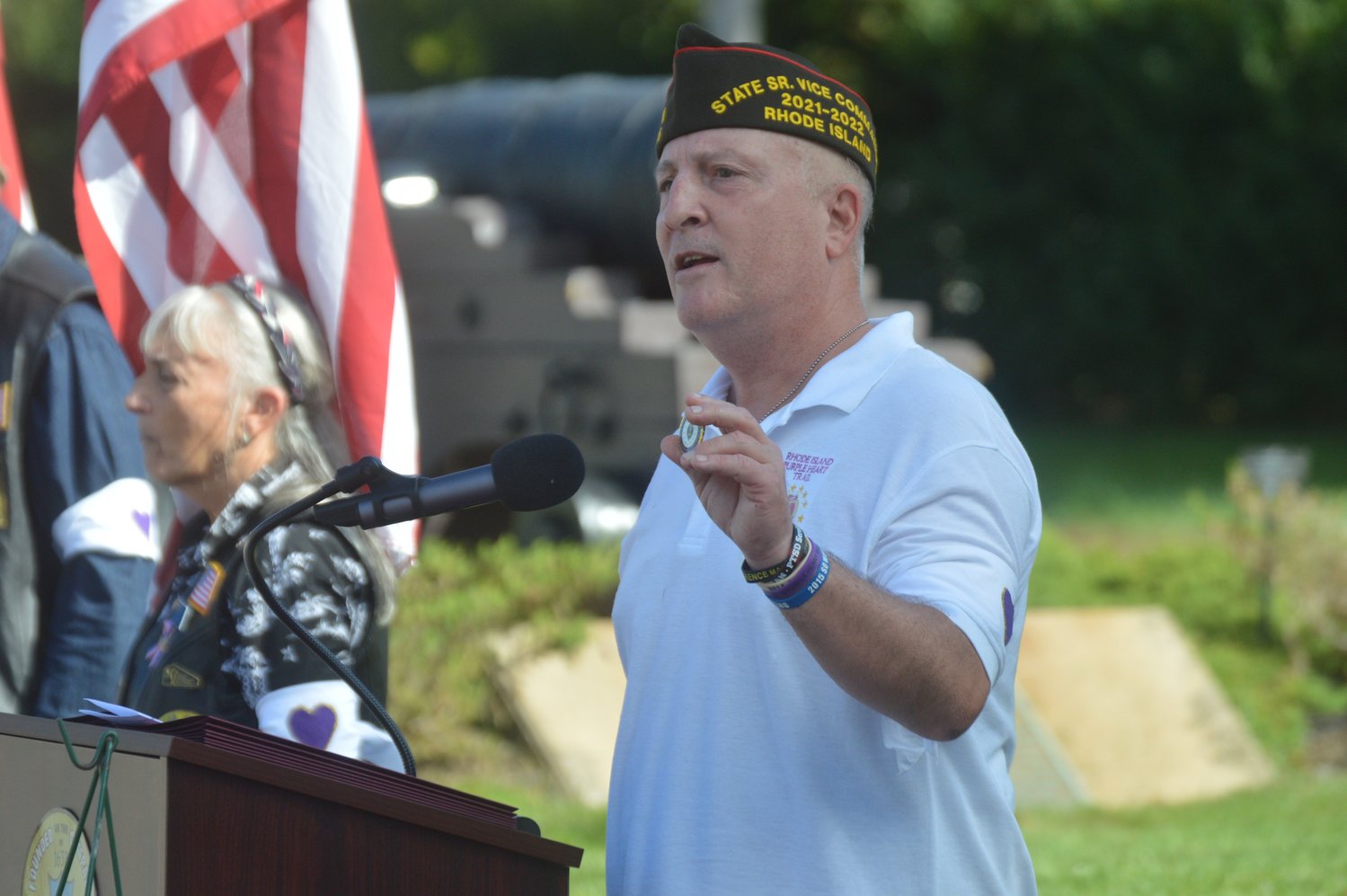 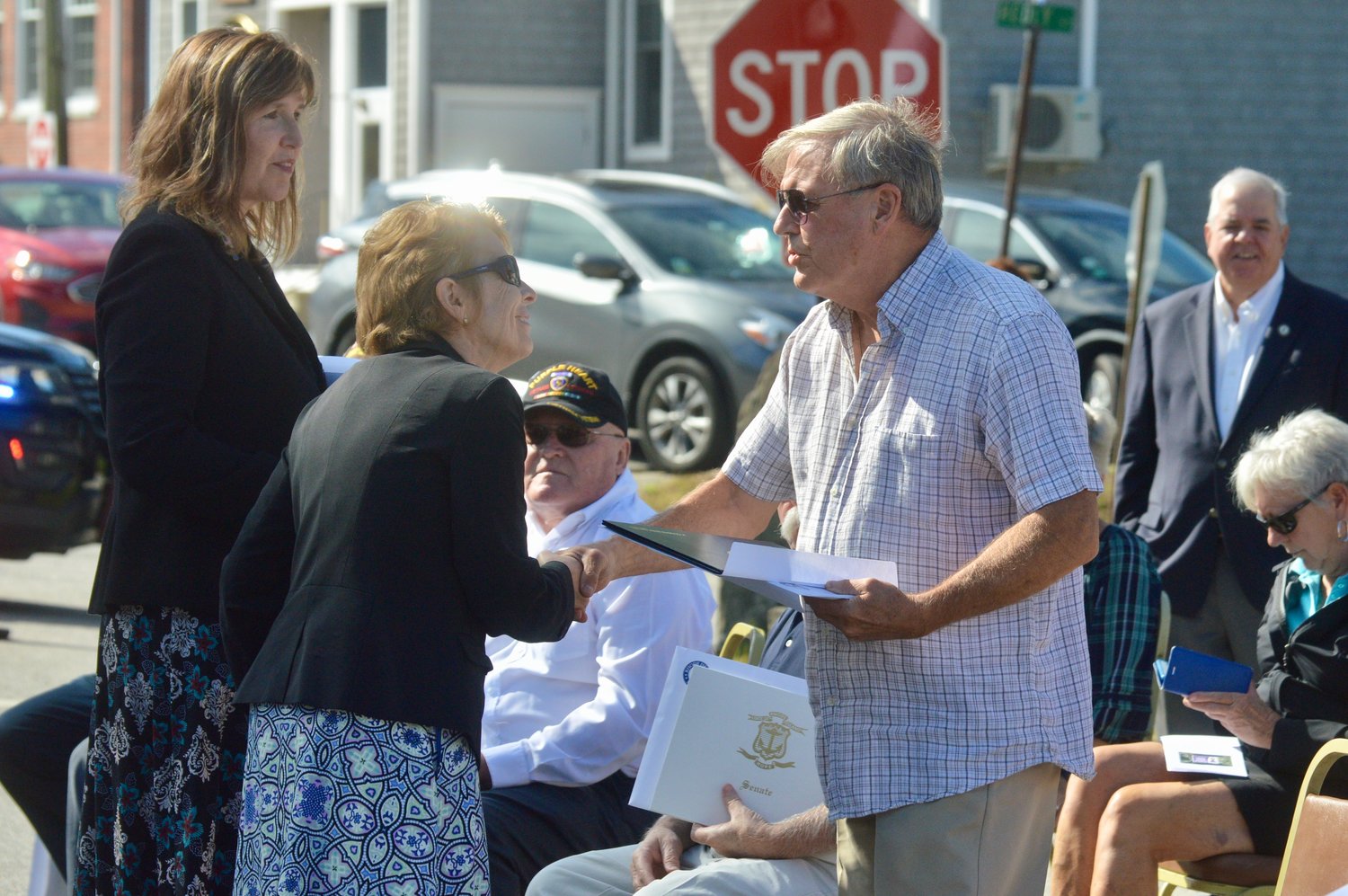 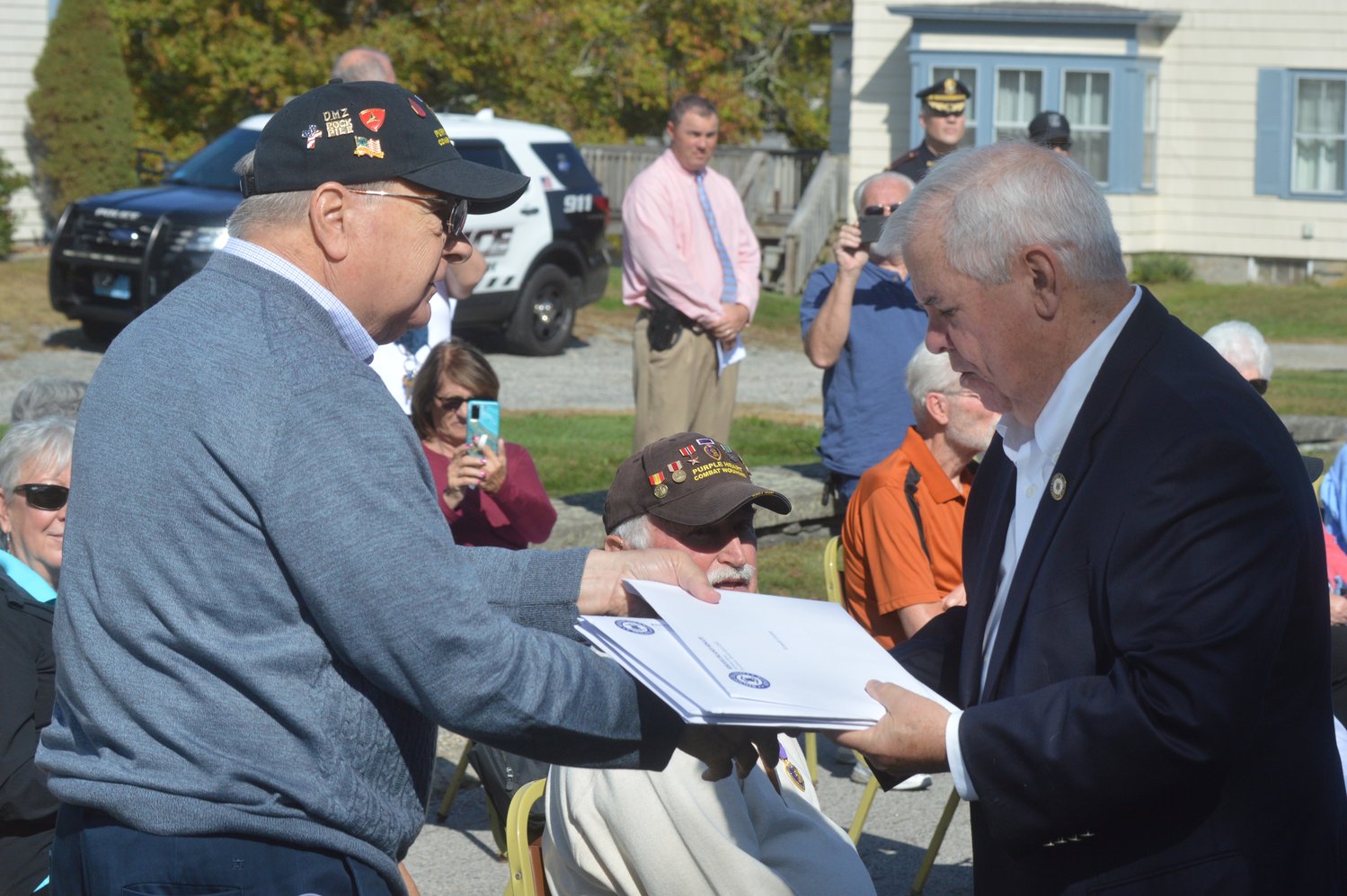 Purple Heart recipient Ken Garthee (left) is given a citation by Sen. Jim Seveney, who read a Senate proclamation in honor of the men.
JIM MCGAW 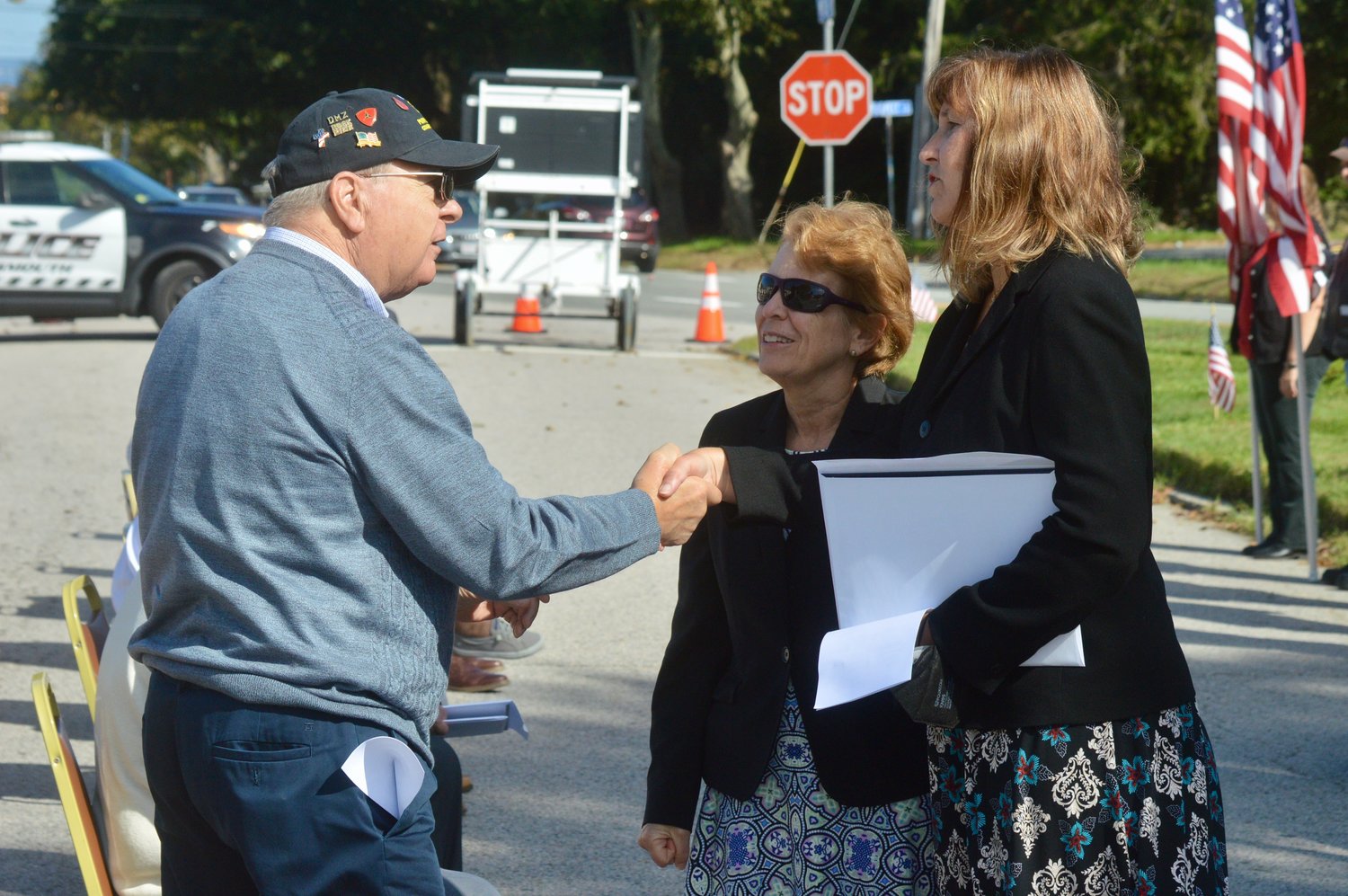 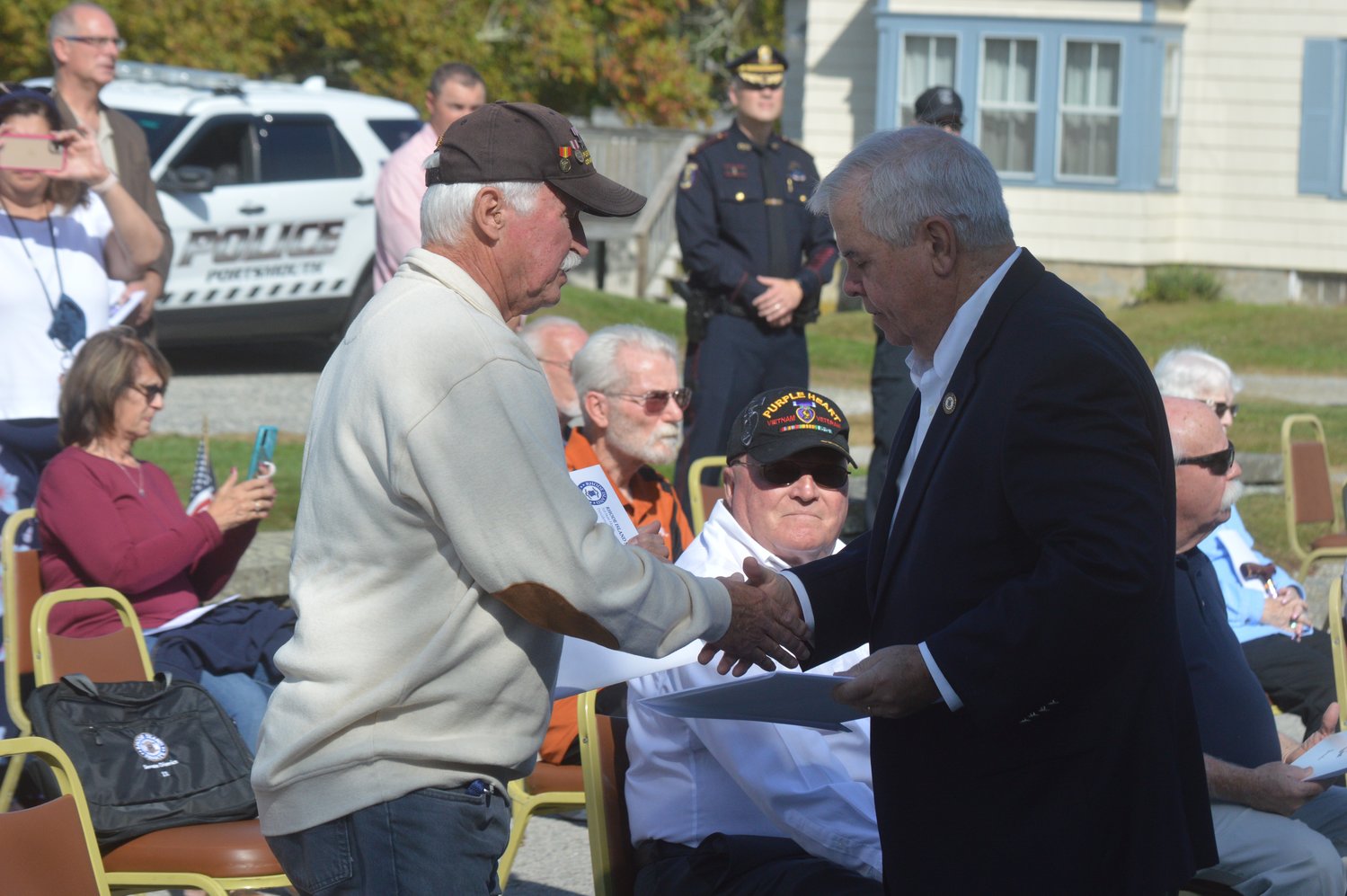 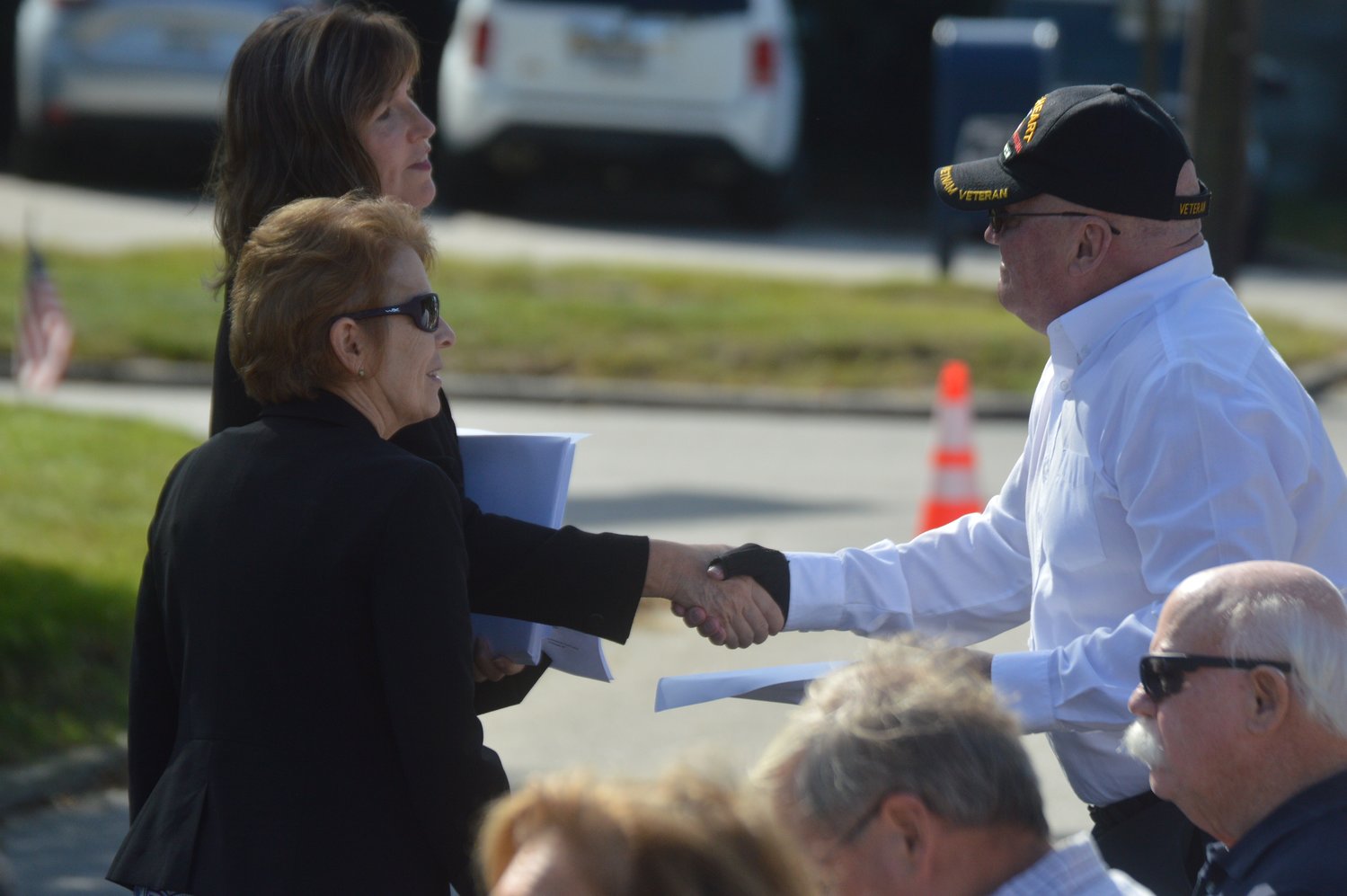 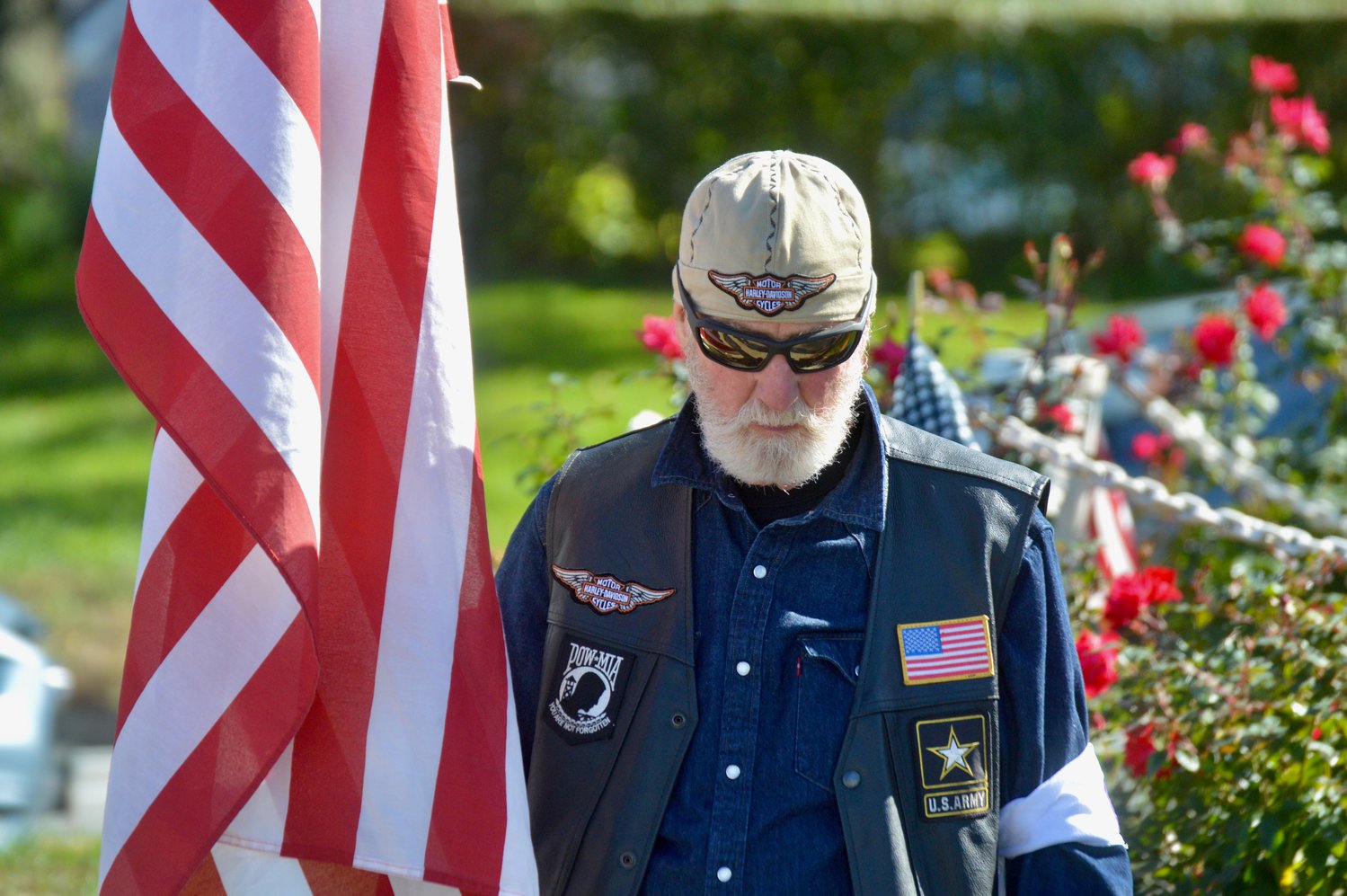 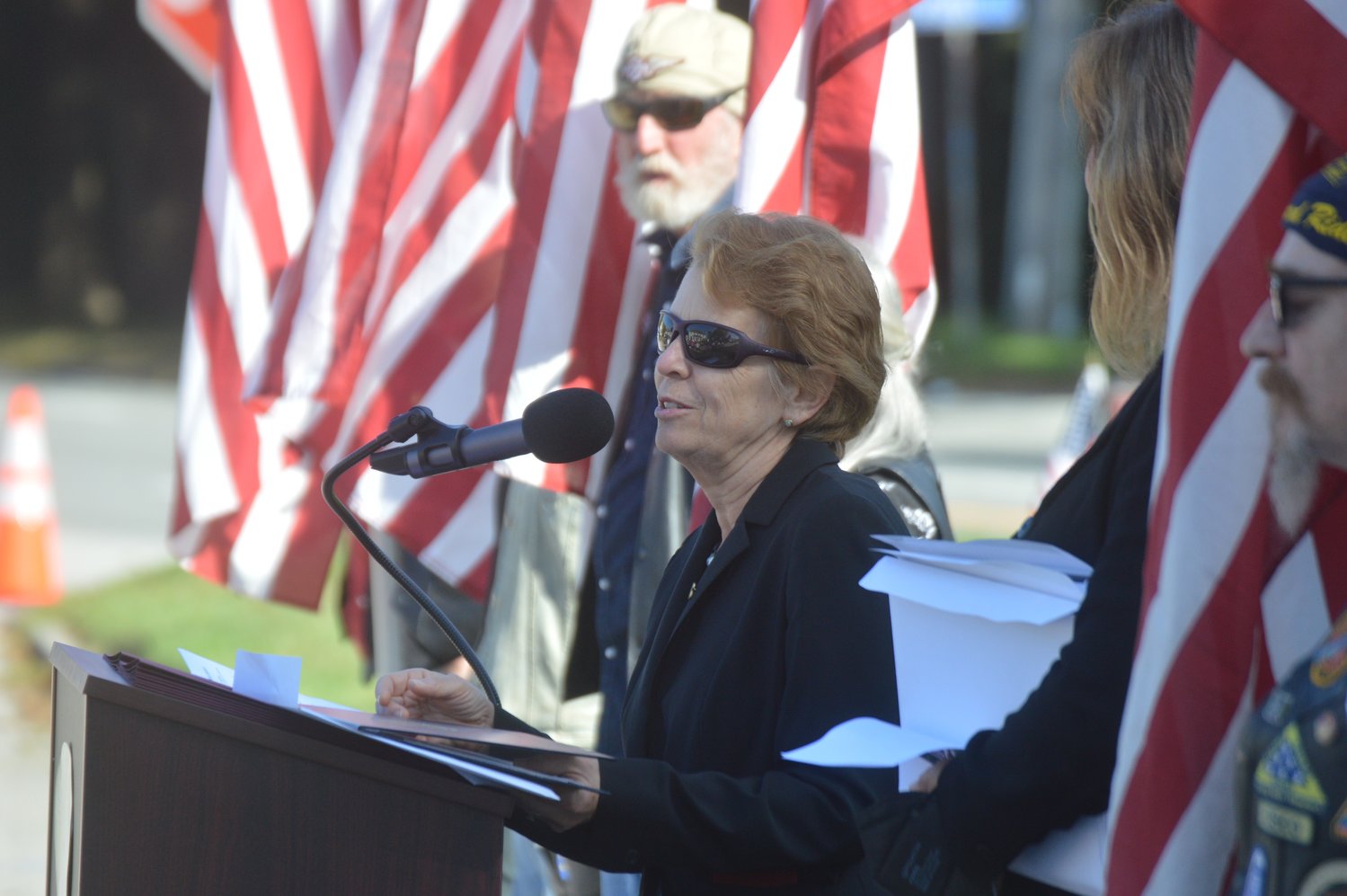 Rep. Terri Cortvriend thanks the recipients for their service.
JIM MCGAW
Previous Next
Posted Friday, October 8, 2021 5:54 pm
By Jim McGaw

PORTSMOUTH — Several of the six local Purple Heart recipients who were honored Friday morning wiped tears from their eyes during a special ceremony at Legion Park in front of Town Hall.

It was the first time the town had hosted a ceremony to pay tribute to recipients of the medal, awarded to U.S. service members, regardless of rank, who have been wounded or killed as a result of enemy action.

Honored were Marvin Clements, Jeff Fletcher, Ken Garthee, Frank Grzyb, Bill McCollum, and Charles Morin. All but Clements attended the ceremony in person. The event came after the Town Council proclaimed the period of Oct. 3-9 as “Purple Heart Recipients Appreciation Week” in Portsmouth.

Grzyb is also the author of several books, including “Touched by the Dragon,” “Ain’t Much of War,” “Rhode Island’s Civil War Hospital,” “Hidden History of Rhode Island and the Civil War,” and “Remarkable Women of Rhode Island.”

Grzyb said the history of the Purple Heart decoration traces back to its predecessor, the Badge of Military Merit, established by George Washington in 1782. Since its inception, it’s the oldest U.S. military decoration presented today.

Army Lt. Annie G. Fox became the first woman to receipt a Purple Heart for her heroic actions as a nurse during the 1941 Japanese attack on Pearl Harbor, Grzyb said. Of course, thousands of “lesser-known, behind-the-scenes service members and military veterans just like ourselves” also share the honor, he added.

The medal itself has little monetary value. “Although it looks like gold, it’s not real gold. It’s a gilding metal alloy comprised of copper and zinc, thus making it a form of brass,” he said.

However, the real value of the Purple Heart is what it signifies, he said. “Those privileged to wear the medal are honored for their valor and loyalty to the United States of America during extremely difficult times,” Grzyb said.

With that in mind, the Purple Heart Trail was conceived as a symbolic path through all 50 states to commemorate all U.S. service members who wear the medal, he said.

“We here today, as recipients of the award, are grateful for the honor,” he said. “But more importantly, we could like to acknowledge those veterans from the Portsmouth community who are here today only in spirit. This trail will certainly perpetuate their memory, if not by name, most certainly by their deeds and sacrifice.”

'Worst day of their lives'

Also speaking and honoring recipients on Friday was Joe “Tiger” Patrick, senior vice commander of the VFW Department of R.I., and commander of VFW Post 916 in Wakefield. An Army veteran who served in Operation Desert Storm and the chairman of the R.I. Purple Heart Trail Committee, he finished a 42-mile trek along Rhode Island’s newly minted Purple Heart Highway in June to bring awareness to local veterans in need.

Patrick said he reached out to R.I. Veterans Affairs (VA) to find out how many Purple Heart veterans were in Rhode Island. After a two-day wait, the rough number came back as 1,300 to 1,400, but only about 800 are in the VA’s system. Purple Heart veterans, he said, deserve not only honor and respect but the benefits “they so richly deserve … by possibly living through the worst day of their lives.”

He said he hoped to have a beer with the recipients some day. “It’s an honor to meet you. Today’s your day,” Patrick said.

Three state legislatures from Portsmouth — Sen. Jim Seveney, Rep. Terri Cortvriend, and Rep. Michelle McGaw — thanked the recipients for their sacrifice and presented them with citations from the R.I. Senate and House of Representatives.

The event, like so many that honor local veterans, was organized by Carolyn Evans-Carbery, who joined the flag line.