PORTSMOUTH — The members of Every Student Initiative (ESI) have been pushing their message about the need for more mental health resources for young people ever since their friend, … 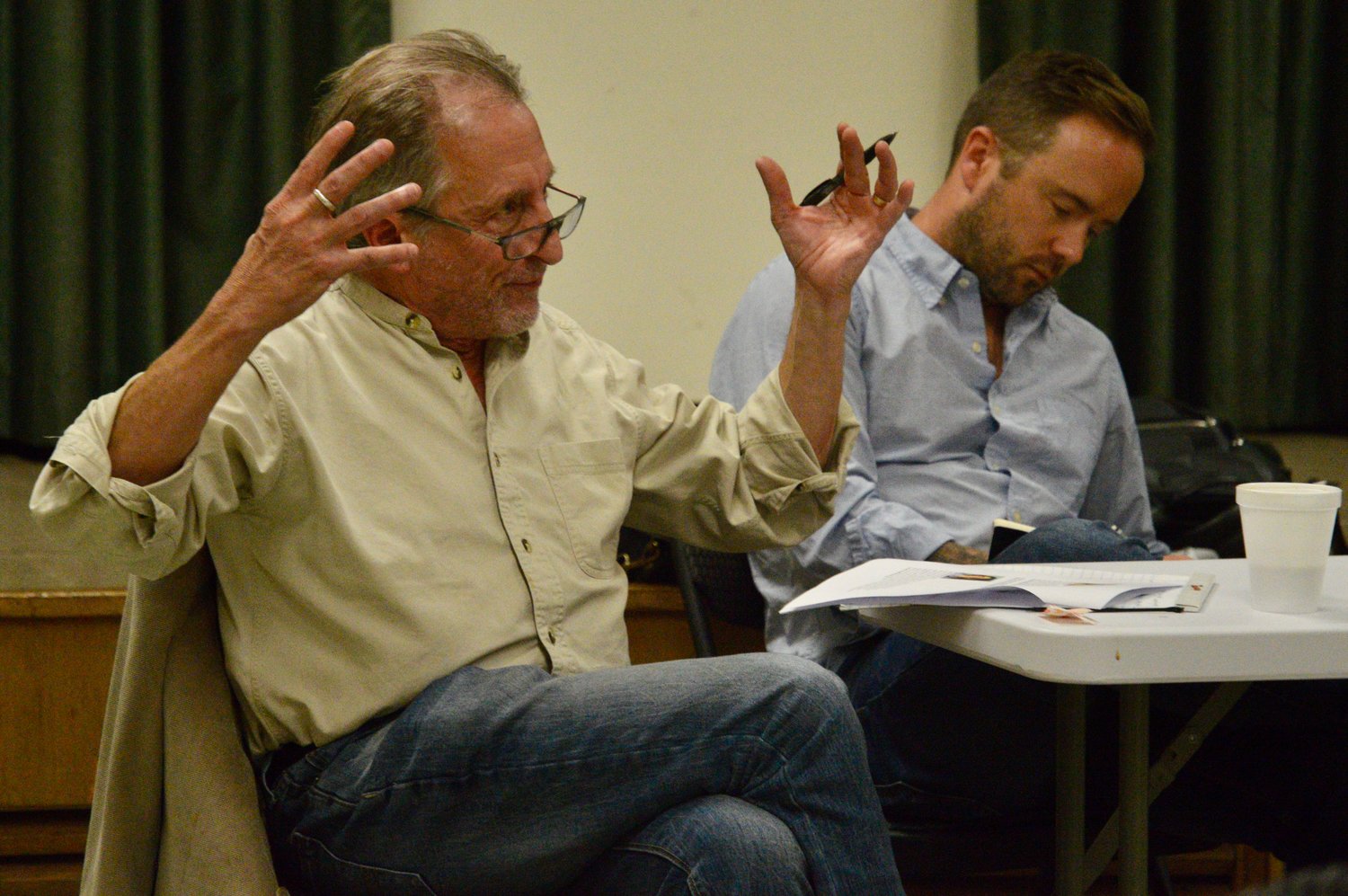 David Blistein, a writer and associate producer on Ken Burns’ team, makes a point while speaking to members of Every Student Initiative. At right is Chris Ewers, co-director of the upcoming three-part film that will focus on mental health issues.
Jim McGaw 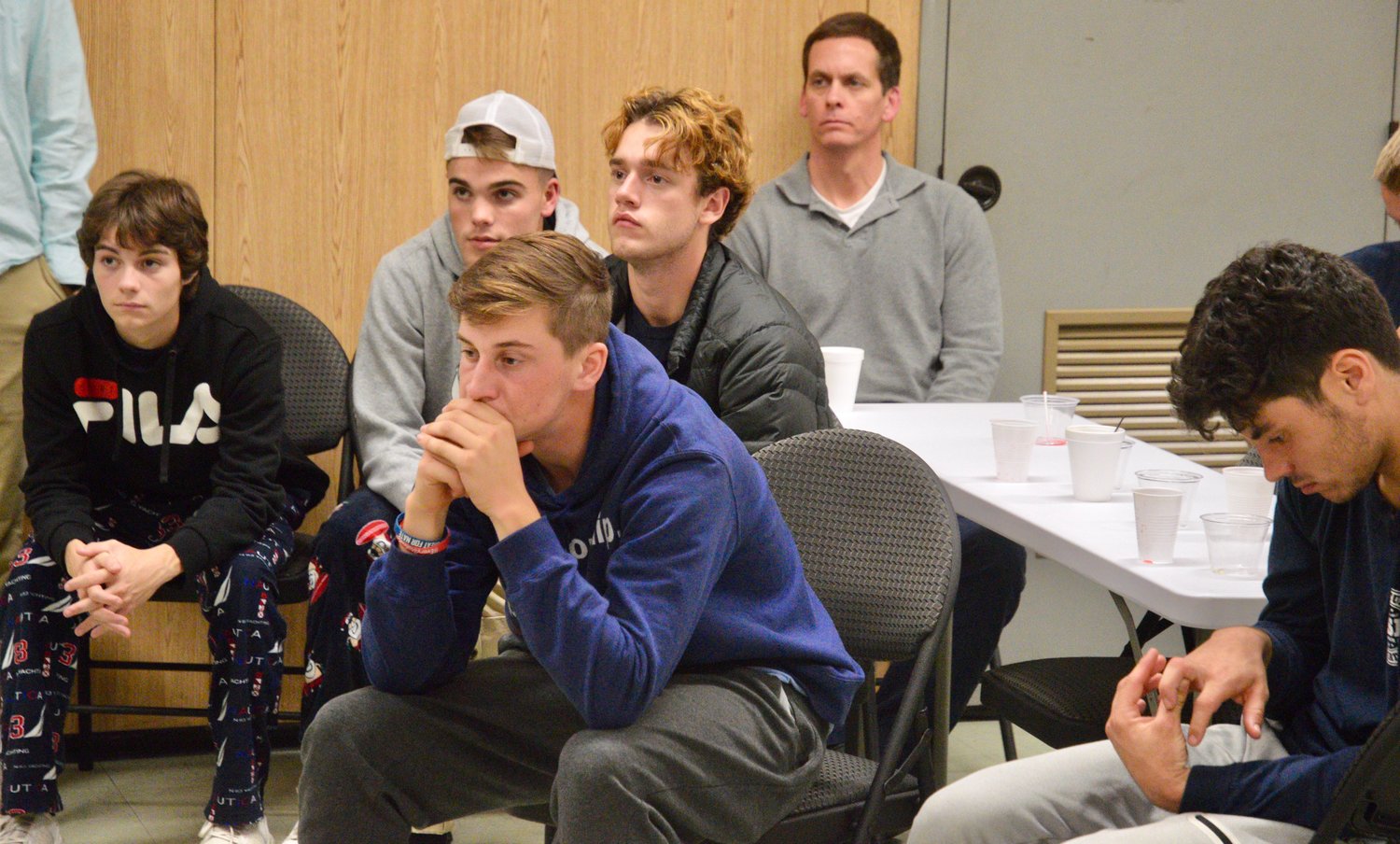 Members of Every Student Initiative listen to the filmmakers along with Rick Bruno (in background), the father of the late Nate Bruno.
Jim McGaw 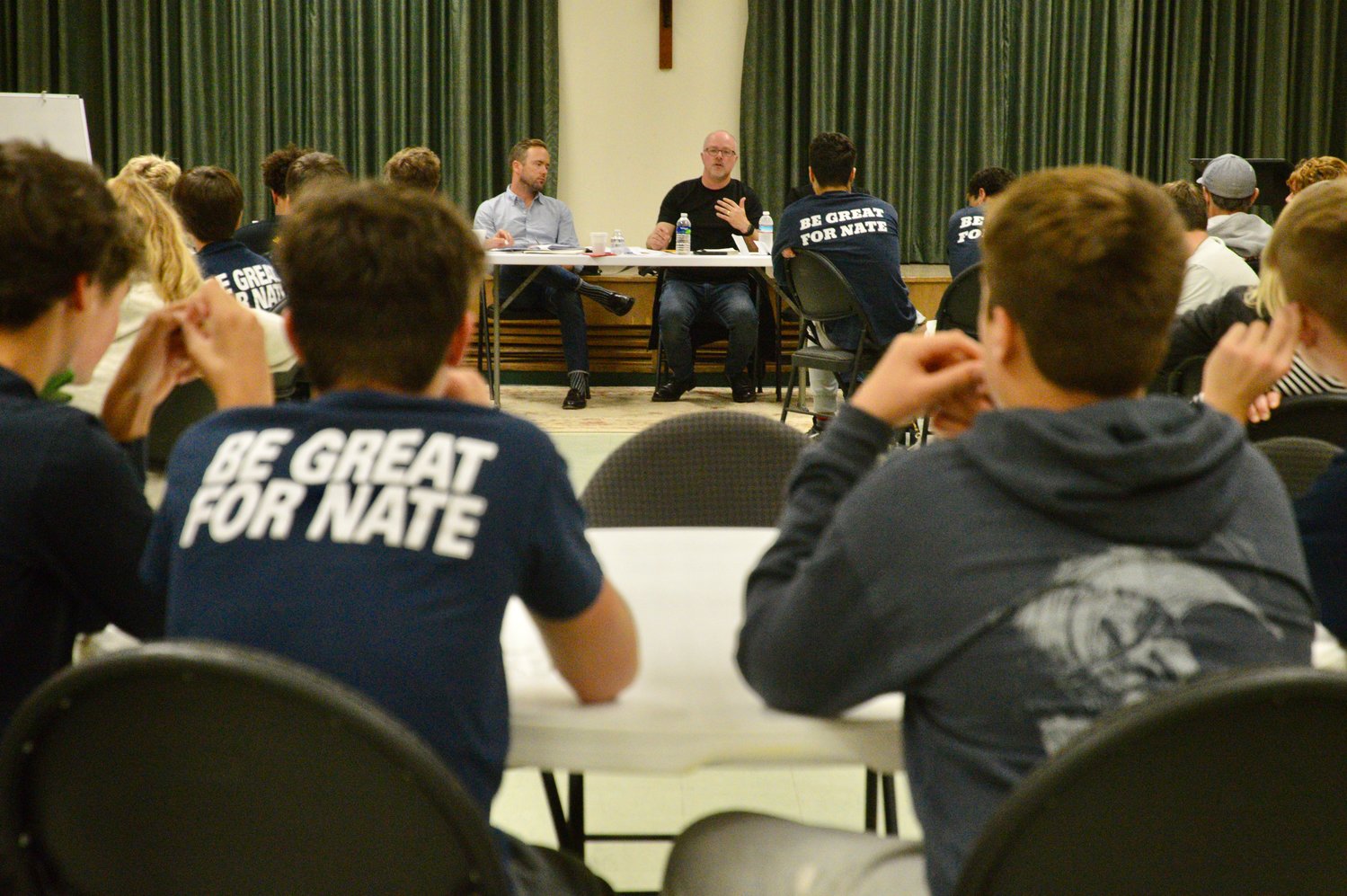 Co-director Erik Ewers talks about the upcoming documentary in front of more than 50 members of the community who came out to hear the PBS crew’s pitch Monday night at St. Barnabas Church. At left is his brother and co-director Chris Ewers. Some students were wearing “Be Great for Nate” shirts in honor of their late friend, Nate Bruno.
Jim McGaw 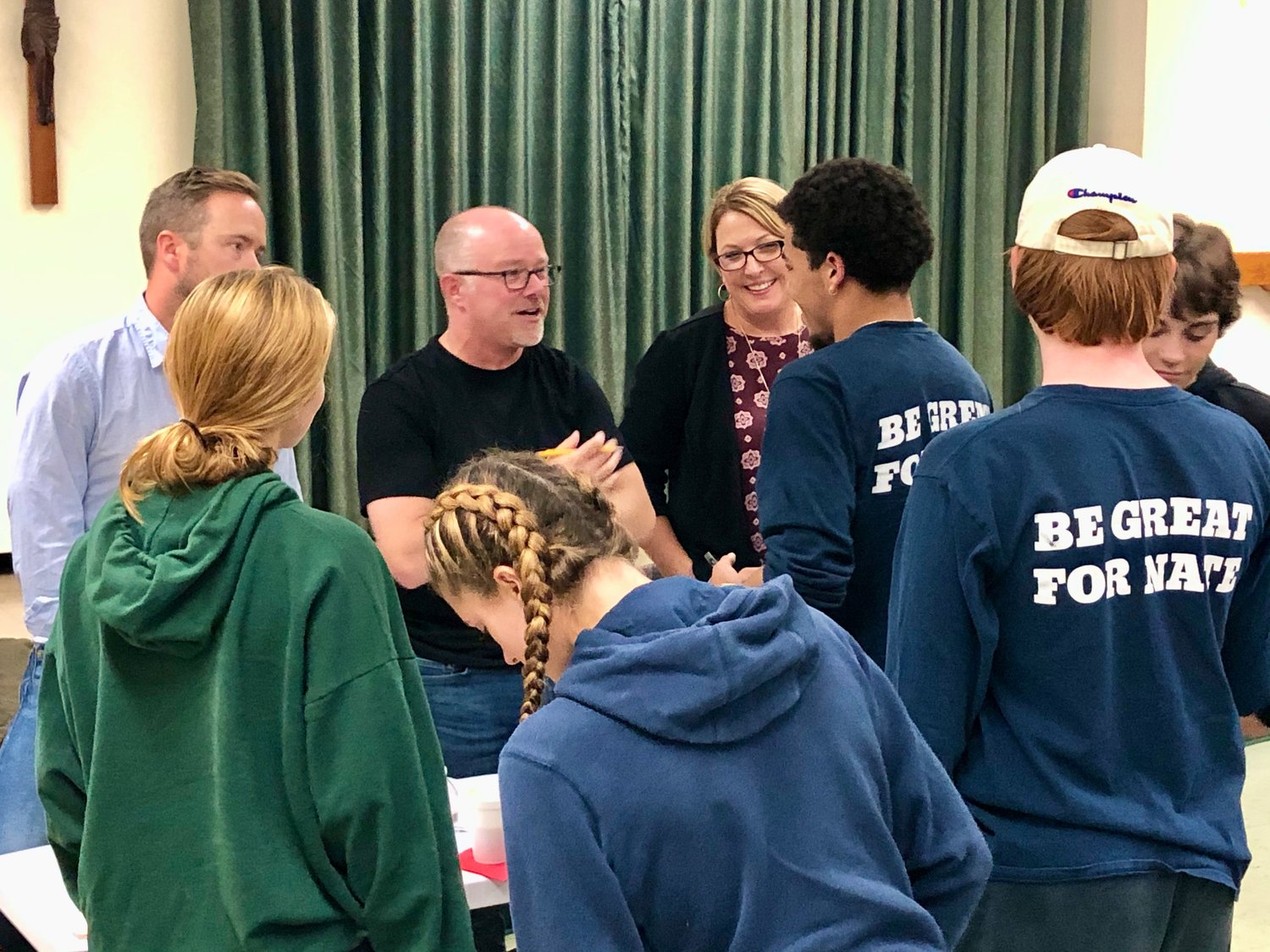 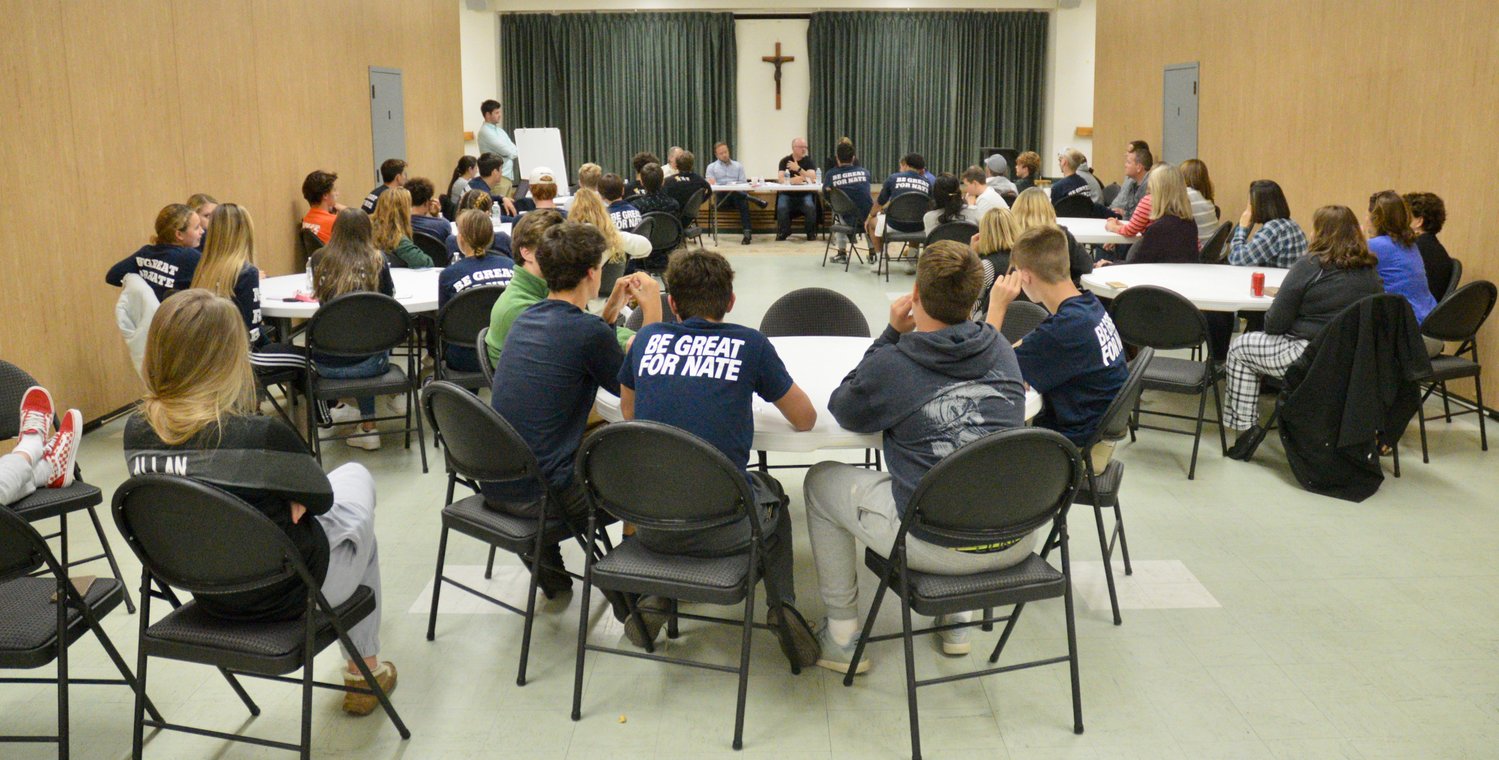 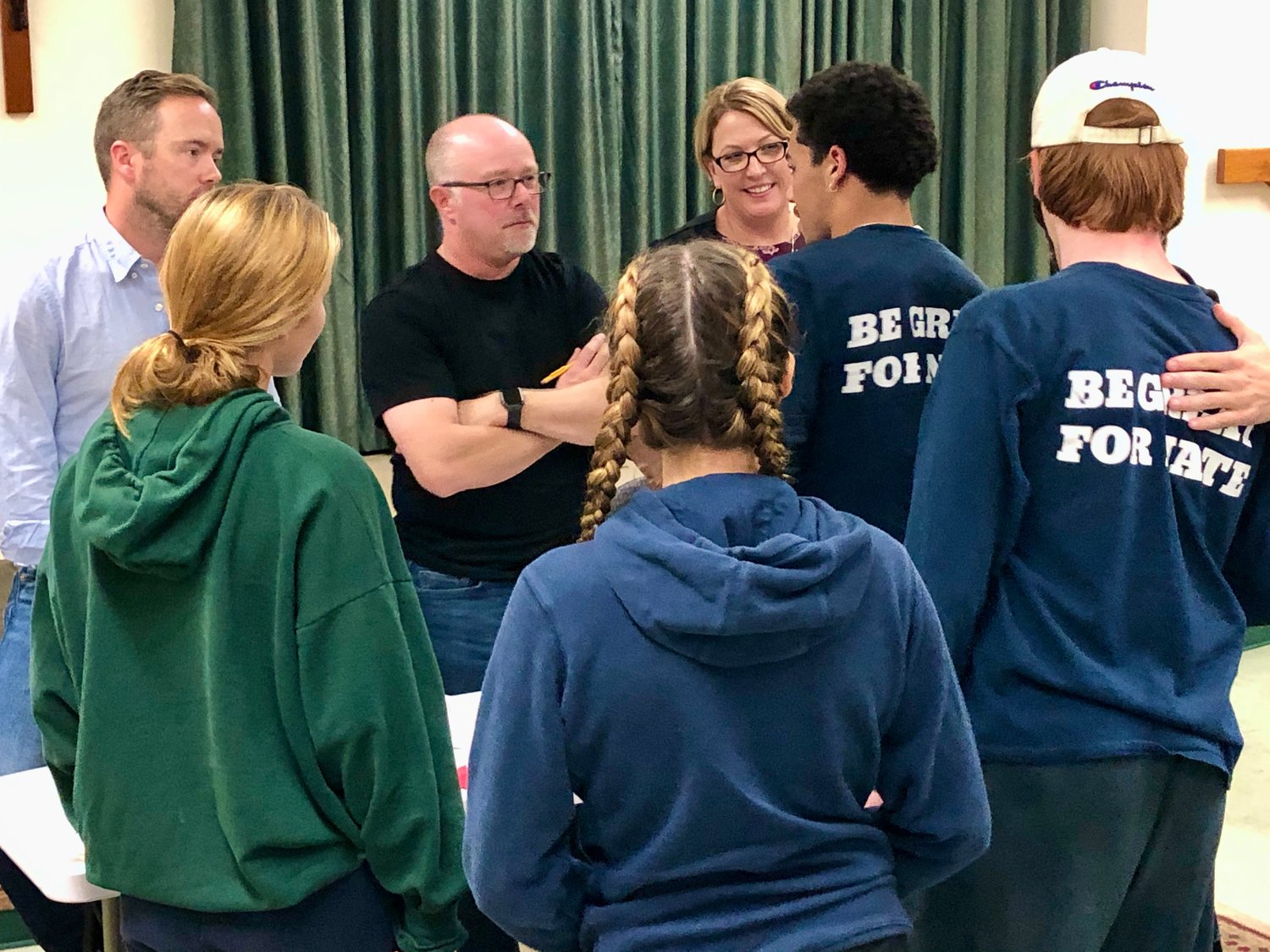 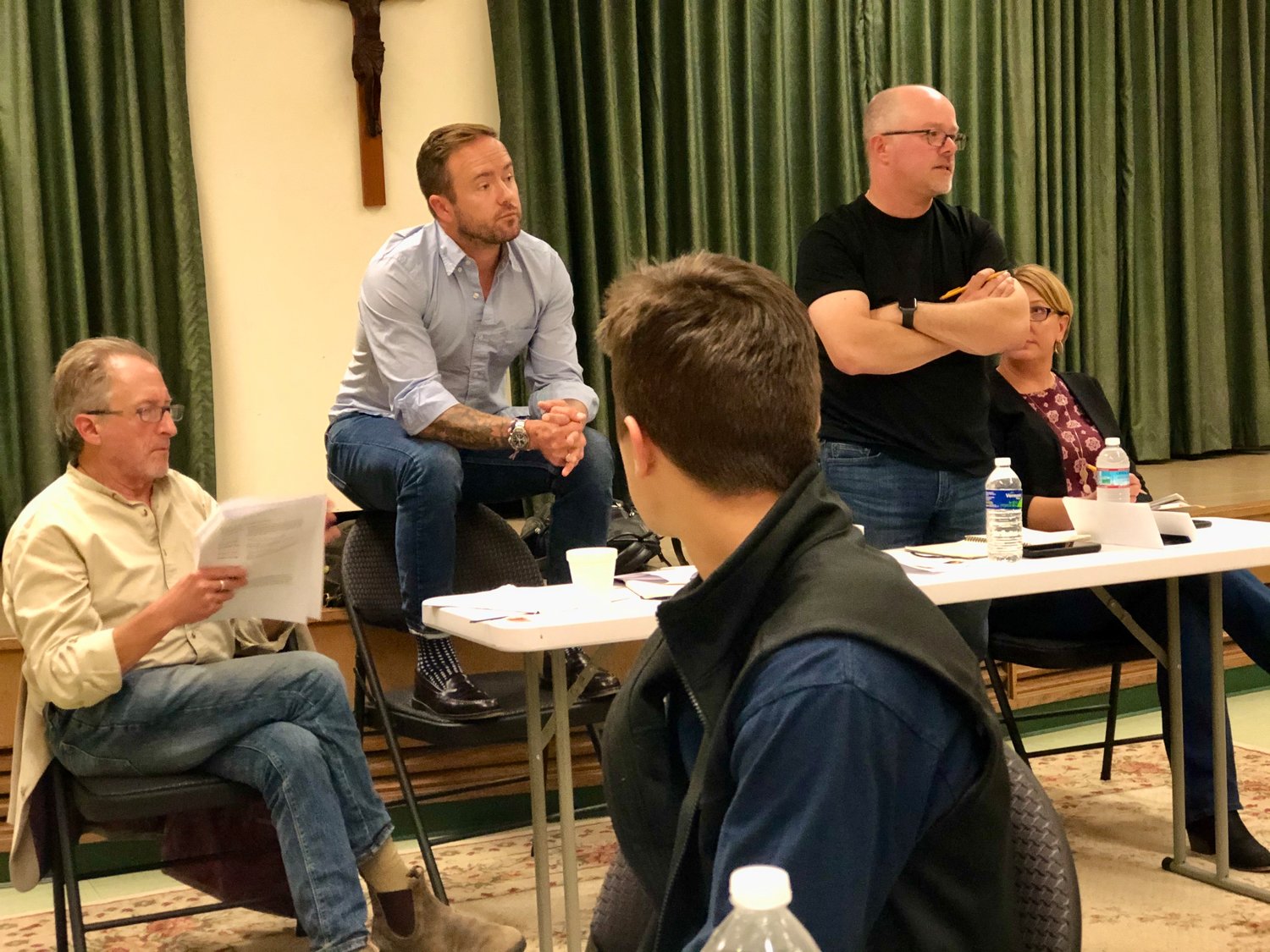 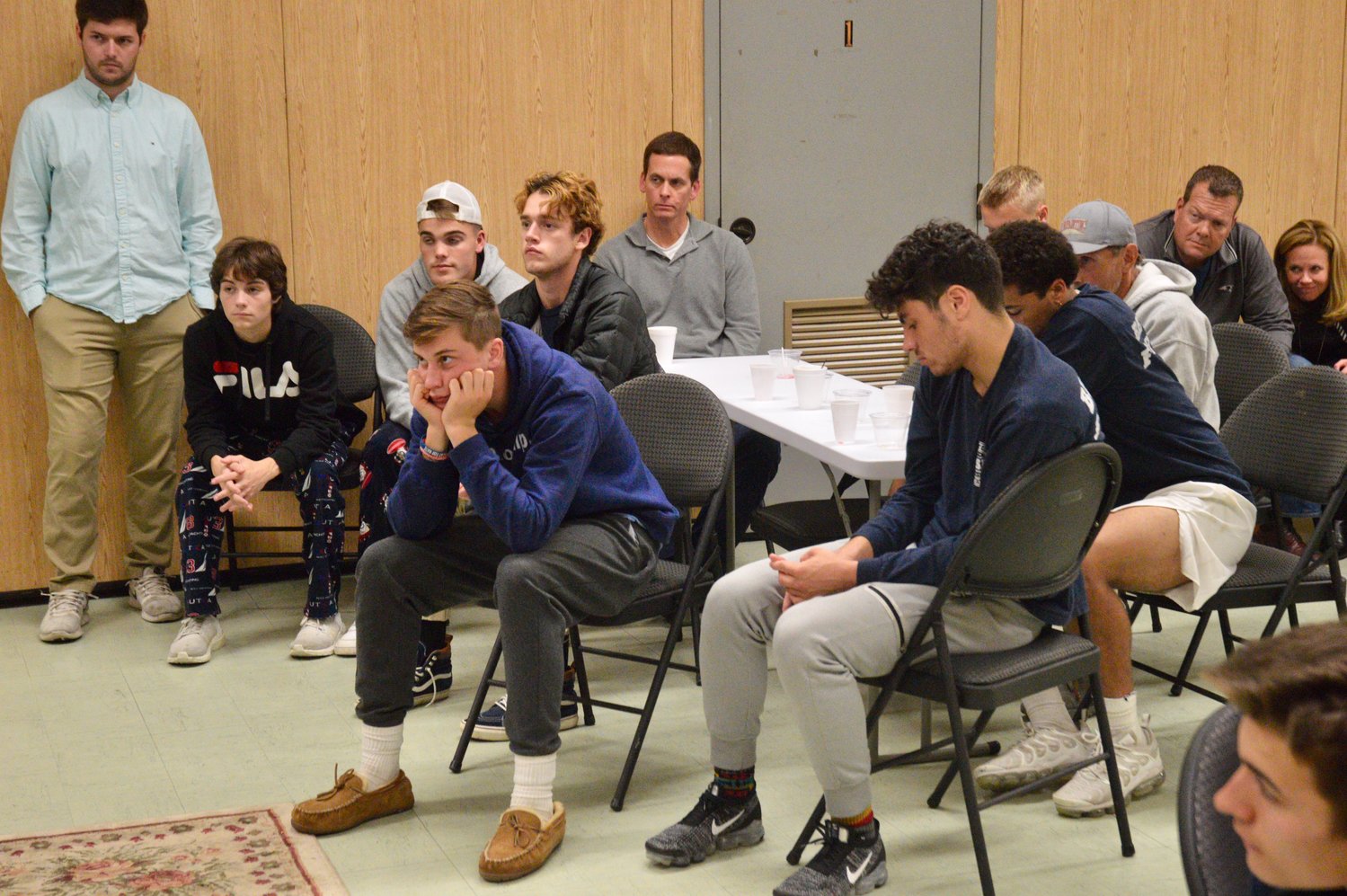 PORTSMOUTH — The members of Every Student Initiative (ESI) have been pushing their message about the need for more mental health resources for young people ever since their friend, 15-year-old Portsmouth High School student Nathan Bruno, took his life in February 2018.

Come the spring of 2022, they’ll have the ears of millions of people, thanks to filmmaker Ken Burns.

Mr. Burns, known for his seminal PBS documentaries about Vietnam, The Civil War, baseball, jazz and more, has sent a film crew to Portsmouth that will be conducting interviews with several members of ESI as well as their parents and possibly others in the community.

Filmmakers will be here Friday, Saturday and Sunday, Oct. 25-27. Members of the crew say they also hope to capture some of the high school’s Homecoming celebration on Saturday, depending on the school district’s cooperation.

“This would be a logical extension of what you’re doing with ESI, just on a much larger scale,” co-director Chris Ewers told more than 50 students, parents and teachers who attended Monday’s meeting at St. Barnabas Church, where four members of Mr. Burns’ team pitched the film and asked for participants.

ESI was formed in the wake of Nate’s death by his friends at PHS. The organization falls under the umbrella of Be Great for Nate, a nonprofit started by Nate’s father, Rick Bruno, and advocates for more mental health resources in the schools. Mr. Bruno, who sat with ESI students at Monday’s presentation, testified along with several students in support of a suicide prevention bill in Nathan’s name at the State House in March.

On Monday night, they listened to Mr. Ewers, his brother and co-director Erik Ewers, writer and associate producer David Blistein, and producer Julie Coffman, as they outlined their vision for the documentary, which will be the first of a three-part, six-hour film project about mental health issues. (Mr. Burns, the executive producer for the project, was not in attendance.)

This first part, which will focus on teens and young adults up to the age of 25, should air on PBS in spring 2022. The two subsequent films will focus on middle age and later-in-life mental health issues, with the last airing about seven years from now, according to Erik Ewers, who’s been working with Mr. Burns since 1990.

“Tom Coderre of the governor’s office was actually talking to the Kennedy Foundation about us at a concert and (members of the film crew) overheard,” Mr. Peterson said, referring to Gov. Gina Raimondo’s senior advisor. “Tom said, ‘Oh, I talked about you at a concert last night and a Hollywood producer might call you.’ I was like, ‘What?’ A couple months go by and they e-mailed us.”

The main goal of the documentary project, filmmakers said, is to “normalize” mental health, as well as the discussion around it. “We want to de-stigmatize it and encourage people to speak,” said Erik Ewers, adding that the best way to achieve that “is to get teens to talk about it.”

That’s precisely what ESI is about, so the group is a natural fit for the project, he said. “We very much admire what all of you are doing,” he said.

His brother said teenagers and young adults are dealing with different issues these days that, fueled by social media, can put more pressure on them than in the past.

“You’re experiencing it in a way that we never had to,” said Chris Ewers, adding that when the film crew heard about ESI, “We thought it was a perfect representation of what we were trying to achieve … What you’re all doing has a much better chance of bringing about change.”

There’s no shame in talking openly about mental illness, filmmakers assured everyone. As if to prove their point, several of them opened up about their own struggles.

“I have been diagnosed with anxiety disorder for the past 20 years and I’m on Zoloft, and I’m not ashamed to admit it,” said Erik Ewers.

“I’ve had days when I was just sobbing on the floor,” said Mr. Blistein, who went around the room asking students and adults to share some of their own stories. They heard plenty; nearly everyone’s hand went up when he asked if they or someone they knew has been impacted by mental illness.

One student said he had been diagnosed with depression anxiety disorder and nearly took his life over the summer. Another said she was diagnosed with the same disorder because she somehow blamed herself for her father’s issues with alcohol. (Medication is helping, she said.) Yet another student said she has cut herself, but self-harm is not something many students talk about openly.

A local teacher said she recently took a leave of absence for a mental health issue and received some pushback from administration. “I had hundreds of days of sick time, and it was questioned,” she said, noting that mental health issues should be treated the same as physical injuries or illnesses.

Another teacher said she hopes the film will show parents or adults in general the enormous pressures that youngsters are under these days. “They say they (understand), but they don’t,” she said. “There are so many pressures on kids, and it’s not OK to be average anymore. Everyone has to be spectacular in every way.”

Collin Cord, ESI’s student outreach coordinator, said most of Nate’s friends “have gone through hell and back.” Members of the group said, however, they’ve become much more educated on mental health issues since their friend’s death. In fact, ESI members may have already saved a life because they’ve since learned how to spot the warning signs, Mr. Peterson said.

About a month ago, he said, a PHS student posted some troubling messages on social media, which led others to believe he might harm himself. Mr. Peterson called police to conduct a wellness check, but the youth wasn’t home. ESI members, however, got involved on social media and were able to track the student down, he said.

Too many to interview

When Erik Ewers asked how many people were willing to be interviewed for the documentary, dozens of hands went up — far too many to include, since the crew is filming throughout the country.

He said the crew will probably do filmed interviews with four people in the room, including “B-roll” footage of students going about their daily routines. Some parents will also be filmed, separately from the students.

One member of ESI asked if any group interviews would be shot, since members of the organization like to get their message out together. However, the filmmakers said they typically prefer to conduct one-on-one interviews.

After the meeting, Mr. Bruno said he was happy to see ESI get the opportunity to spread its message to a national audience.

“The kids are working hard to raise awareness in honor of Nathan,” he said. “It’s a major tragedy, but the boys are turning it around to try to bring something good out of it through their struggles and their grief.”

Jan. 31 workshop will focus on future of Barrington's public schools