The arts served as a focal point during a recent BEF "circle of conversation." 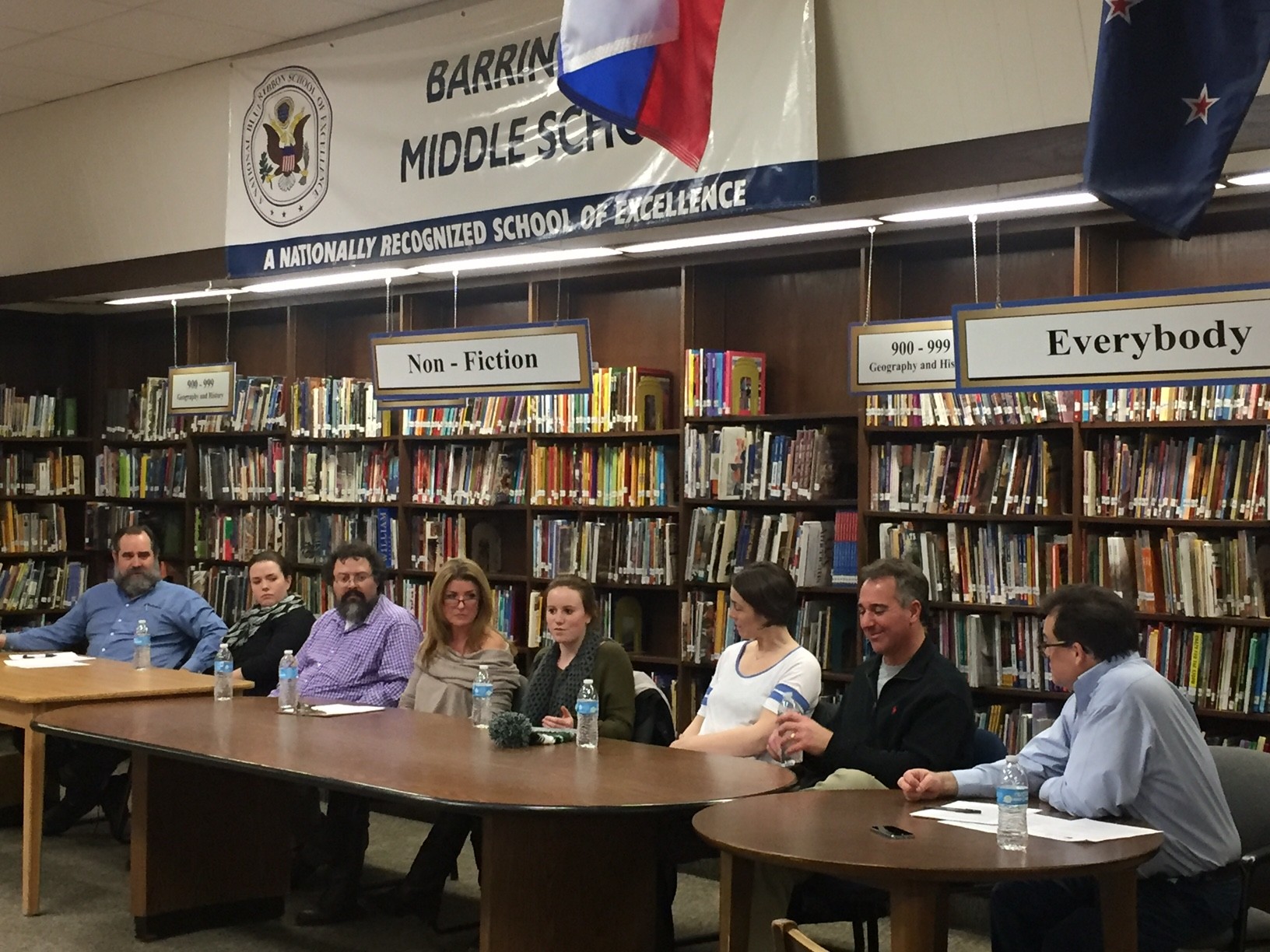 The panel discusses the importance of arts during a recent BEF circle of conversation.
Posted Wednesday, February 8, 2017 2:02 pm
By Joan D. Warren

The arts served as a focal point during a recent BEF "circle of conversation."

A group of eight people from varying backgrounds spent time discussing the importance of arts in education and how it helps students grow and excel. The conversation was part of a new initiative from the Barrington Education Foundation.

Recently BEF sponsored a series of inspired "circles of conversation" including one titled: The Role of the Performing Arts in the 21st Century.

About a dozen people attended the arts-based circle. It was held at Barrington Middle School and led by W. Peter Bilderback, PhD. and president of the board of directors of Arts Alive! Barrington.

The overwhelming consensus from the panel was the collaborative nature of performing arts and the importance of self expression.

Mr. Dell’Antonio, who works as a professor in the department of physics at Brown University, said that collaboration brings out the best in others.

“In the performing arts, you work towards a goal and have a set agendas with different skills to get to that goal," he said. "It is working interactively to bring out the best in others."

Ms. Daugherty, a senior at Barrington High School, agreed. As founder of the unified theater program at the high school, she sees the performing arts as a way to bring together students of all abilities.

“The purpose of unified theater is to engage students in deeper inclusion. It integrated students in a common purpose,” she said.

Ms. Warren, a resident artist at Trinity Repertory Company in Providence, said that the performing arts help everyone involved in that everyone has a valuable role.

“There are no small actors," she said. "Everyone has varying abilities and experiences working together.”

“Learning how to connect with an audience and learning patience and a work ethic translates in to anything you do in the future,” she said.

The panel agreed that the arts teaches patience and gives participants self-confidence and character building skills.

Ms. McCabe, who serves as the executive artistic director for Barrington Community Theater, said that in her experience, she sees theater as a way for students to find themselves.

“It gives something to relate to — connections. Knowing you are not alone is incredibly valuable," she said. "There is no test value but hugely important in a personal growth value."

Mr. Viall, a professor of computer engineering at UMass Dartmouth and stage manager for Arts Alive!, said that participating in the performing arts can include more than performers.

“Technical people can be drawn to the theater. Design, engineering, special relations and special aspects are all involved and theater gives self-confidence like nothing else will,” he said.

Meet the panel:
• Lindsay Daugherty: A member of the Barrington High School class of 2017 and founder of the BHS chapter of Unified Theater. Unified Theater brings together young people with and without disabilities, where they come together as equals to put on theatrical productions. Each production is entirely organized, written, and directed by the students themselves.
• Dena Davis: Artistic director and co-founder of Arts Alive!, a non-profit that partners with PTOs to bring musical theatre into Barrington Schools. She’s worked professionally in theatre education and as an actress for over 20 years. To date she has directed 21 plays in the Barrington public school district.
• Ian Dell’Antonio: Professor in the department of physics at Brown University, where he employs a variety of astrophysical techniques to address fundamental issues of cosmology, including explaining what kinds of materials comprise the universe, and why the universe is accelerating its expansion.
• David Lauria: Choral and music technology teacher at Mt. Hope High School. He is also the youth orchestra director at Barrington’s St. Luke’s Church. He recently wrote, produced, and engineered material for the self-titled album from Listen Above, a group that brings together youth and adult performers to make music with a positive message.
• Kelly McCabe: Executive artistic director for Barrington Community Theater. She has been working with children and teens in theater for 11 years. In addition to her work with Barrington Community Theatre/Barrington Enrichment Summer theatre, she also works as the scenic designer and a STEAMM Educator for the Center for Dynamic Learning.
• Phillip Viall: Stage manager for Arts Alive!, and professor of computer engineering at UMass Dartmouth.
• Rachael Warren: A resident artist at Trinity Repertory Company in Providence. Since starting at Trinity in 1999, she has appeared as an actress in more than 30 productions.