Residents speak out against plan, concerned about $124M price tag

Members of the school building committee endorsed a plan to build two new elementary schools, renovate Nayatt and turn it into an early learning center, and eliminate Sowams School, as part of the …

Residents speak out against plan, concerned about $124M price tag 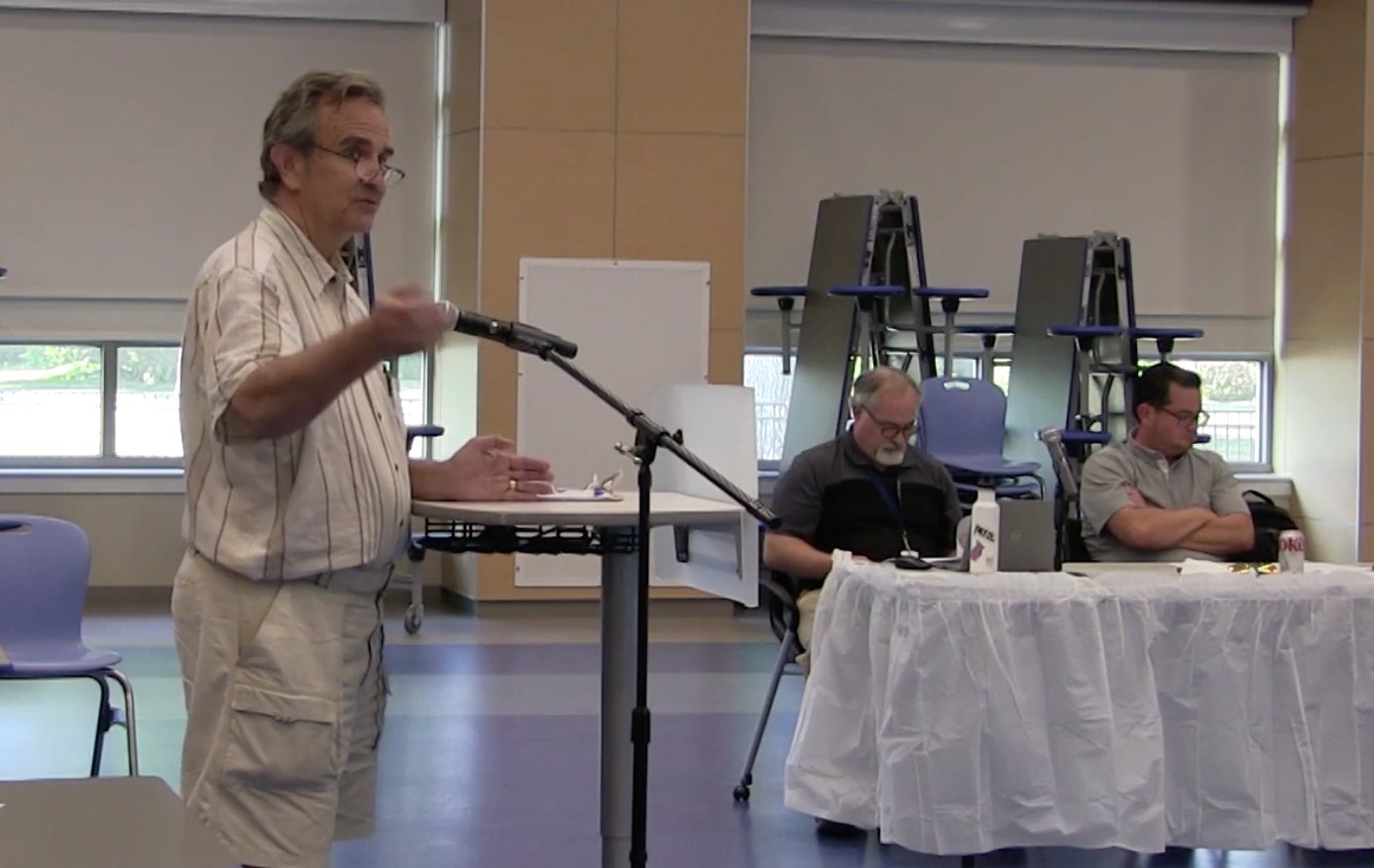 Barrington resident Mark Hanchar (left) shares his concerns about the price tag for the proposed projects — the rough estimate is between $98 and $124 million. 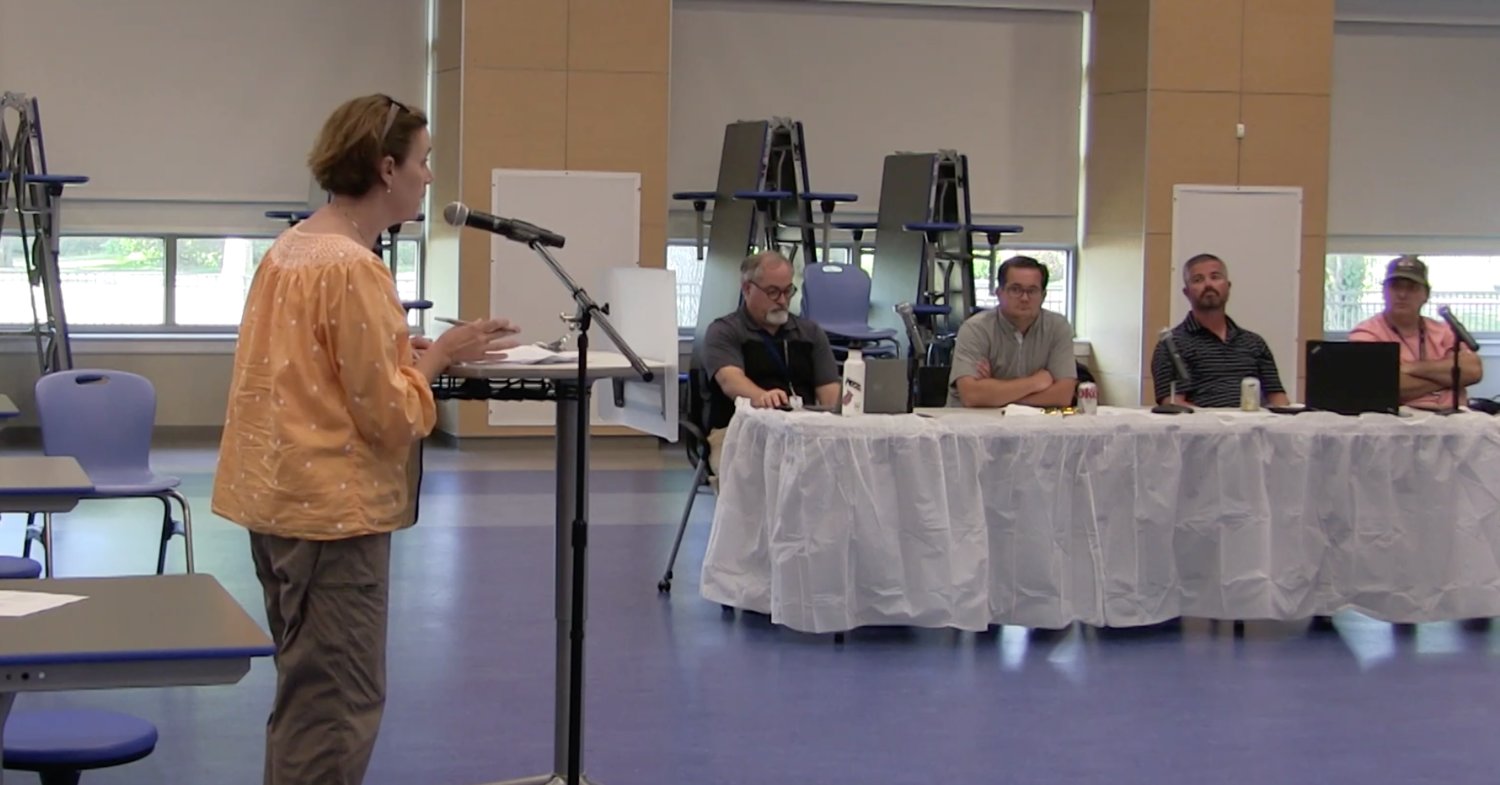 You need to take this show on the road. You have to let people know.”
Mary Alyce Gasbarro, to school officials
School construction options

Members of the school building committee endorsed a plan to build two new elementary schools, renovate Nayatt and turn it into an early learning center, and eliminate Sowams School, as part of the district’s master facilities plan.

The recommendation, made during a meeting Thursday afternoon, July 28, was met with negative comments from the public.

Mark Hanchar questioned the financials surrounding the project, stating that this project would mark the largest amount of debt service ever assumed by the town. The early rough estimates for the work ranges from about $98 million to $124 million.

Mary Alyce Gasbarro told school officials they needed to do a better job informing the public about the plans. Gasbarro said her best friend lives right next door to Hampden Meadows School, which would be demolished and then a new school built on the site, and she knew nothing about the project.

“You need to take this show on the road,” Gasbarro said. “You have to let people know.”

Susannah Holloway shared a number of comments — she said the schools need to do a better job of outreach with the community, and she is concerned with the financials of the project. She also spoke about not being allowed to attend a deep dive visioning session that involved the future of Barrington schools, and her perceived lack of elected officials serving on the school building committee.

But it was Elizabeth Kirk who may have offered the most alarming comments. The long-time real estate professional told school officials that the school plan will turn the real estate market on its head in Barrington. Kirk said the decision to eliminate the neighborhood elementary school model and instead construct two kindergarten through Grade 5 schools will have a profound impact on property values in Barrington. She said prospective home buyers are often drawn to Barrington for its neighborhood schools.

“It’s one of the key selling points of this town.” Kirk said, adding that the three elementary schools (Primrose Hill, Nayatt and Sowams) make Barrington special.

Kirk asked school officials to step back and reconsider the plan. She said they need to think about what Barrington stands for, and “this isn’t it.”

Option 2B calls for the construction of Grades 1-5 schools at the Primrose Hill and Hampden Meadows school sites, and the conversion of Nayatt School into a pre-K and kindergarten early learning center. The plan eliminates the need for Sowams School, although school officials have not specified if they would want to “mothball” or shutter Sowams, possibly keeping the option available to use the building as a school again in the future.

Option 2B also calls for the addition/renovation or new construction at the high school. That part of the work has not included any details yet. Also, there would be no changes at the middle school.

School officials spent about an hour discussing various aspects of the plan before deciding which of the six options drawn up by the firm Kaestle Boos and Associates they liked best.

They asked about traffic impacts, application submission deadlines and finances, and time after time were met with a similar response from KBA’s Kate Jessup: Do not focus on the details yet — this phase is about determining how the district will deliver its education.

At one point in the meeting, Barrington School Committee member Patrick McCrann said he was struggling with making a decision with having all the details.

Jessup said officials only needed to narrow down the scope of what the plan will be. Offering an analogy, she said school officials were, right now, only deciding if they wanted an SUV or a sedan.

Eventually members of the school building committee voted on their preferred plan. First they selected three finalists. Option 1A, which would have kept all the schools open, drew five votes. Option 3, which called for pre-kindergarten through Grade 5 schools, received 10 votes. And option 2B drew 11 votes.

A short time later, committee members voted for their top pick among the finalists: Option 2B drew the most support.

Following the vote, officials opened up the meeting to public comments.

Hanchar spoke first and offered a concerning view of the project financials. Hanchar, a longtime resident and architect who has worked on similar project, said the debt service assumed by the town would result in $7 to $10 million per year in debt service payments annually over the course of a 30-year bond. He estimated a 15 percent annual tax increase needed for the debt service.

Hanchar said that was too large a burden to place on Barrington taxpayers.

Hanchar also spoke about potential traffic issues that will occur due to the work. Gasbarro, a former town council president and longtime resident, referenced that point also. She said the current neighborhood elementary school model allows young students to walk or ride their bikes to school each day.

School building committee member Bob Wilmarth said he chose Option 2B because it offered the best opportunity for kids to continue to walk and ride their bikes to school. Kirk responded by saying that first- and second-graders would not be able to ride that far to the newly proposed K-5 schools.