He starts each day riding with one of his daughters as she pedals from their home in West Barrington to school at Hampden Meadows.

Then it is off to work for … 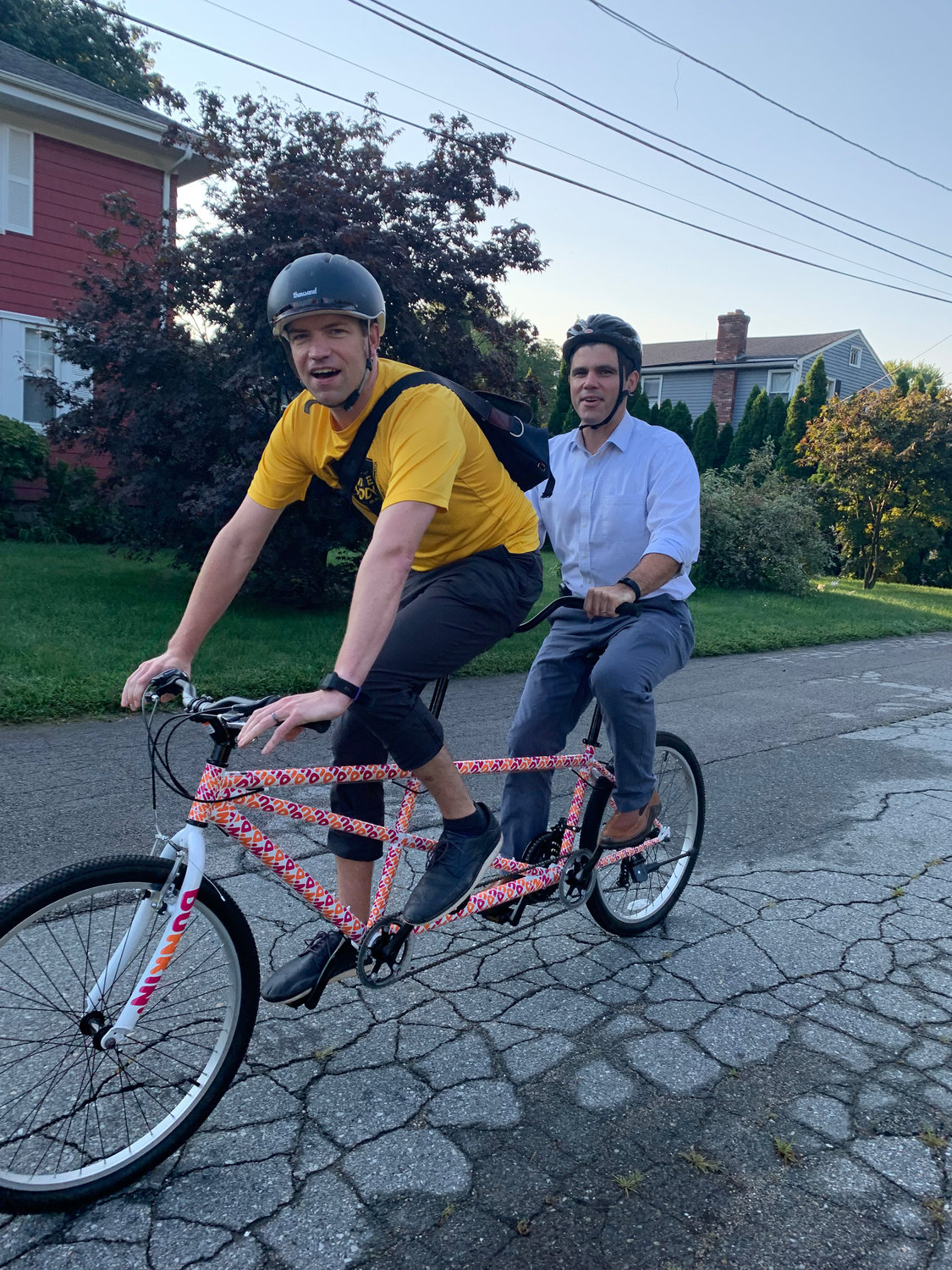 Dr. Tom Ollila (left) rides a tandem bike with Dr. John Reagan. Dr. Ollila, a hematologist/oncologist with the Lifespan Cancer Institute based at The Miriam Hospital, created the Tour de Rhody, a bike ride that benefits cancer research at Brown and at Lifespan. The tandem bicycle was donated to the Tour de Rhody by Dunkin Donuts.
Posted Wednesday, November 3, 2021 4:00 pm
By Josh Bickford

He starts each day riding with one of his daughters as she pedals from their home in West Barrington to school at Hampden Meadows.

Then it is off to work for Dr. Ollila — he rides along the East Bay Bike Path to Rhode Island Hospital or The Miriam. It does not matter what the weather is like, and he has even rigged one of his older bicycles to handle the ice and snow.

The commute is about 10 miles — house to hospital — and back again.

Recently, Dr. Ollila combined his love for biking with his career as an oncologist and organized the Tour de Rhody, a charity bike ride that benefits cancer research at Brown University and Lifespan. In just its third year, the Tour de Rhody continues to grow. This year, approximately 350 riders participated, and over the last three years the event has raised nearly $100,000.

Dr. Ollila said there are two reasons he first started the Tour de Rhody. He said there had previously been a different bike ride that raised money for cancer research — it was called Ride Round Rhody, and was organized by fellow Barrington resident and town council member Jacob Brier. But the Ride Round Rhody no longer exists, said Dr. Ollila, creating a bit of a void, and an opportunity.

The other reason stemmed from Dr. Ollila’s work.

“I realized I could do something like this that could benefit cancer research in Rhode Island,” he said.

Initially, Dr. Ollila was not sure he was up for the challenge of organizing a fund-raising bicycle ride, but a fellow doctor sent him an email about a similar even held annually in Columbus, Ohio.

The Barrington resident built the Tour de Rhody from the ground up, literally. In addition to finding a platform to handle registration for the race, he also was responsible for picking the bike route and marking it for riders.

Dr. Ollila said he used spray chalk to mark the roads that first year of the Tour de Rhody. He said the markings looked great, right up until the night before the race.

“It poured that night,” he said, adding that the rain washed away all the chalk.

Very early the morning of the ride, Dr. Ollila was driving around the course, putting down new paint.

This year, Dr. Ollila was able to gain access to some rarely-used roads that circle the Scituate Reservoir. It was one of the few times people have been allowed on the roads, Dr. Ollila said.

“… they were happy to support a good cause,” he said, of the people who opened up the roads to the ride.

Dr. Ollila said many people have played key roles in helping him organize and operate the Tour de Rhody each year: his wife and children, many of the people he works with at the cancer center at The Miriam Hospital, the group at Team Lifespan, and countless others. He also said many of his colleagues participated in the ride.

“I have a lot of great people helping me,” he said.

Recently, some of Dr. Ollila’s work gained attention as he was published in the medical journal, JAMA Oncology. His work, which took place this spring, focused on antibody response to the Covid-19 vaccine in patients with cancer or those who had recently undergone treatment for cancer. Dr. Ollila said that for people in those groups, the antibodies normally produced while receiving the vaccine were virtually undetectable. That meant the vaccine had little to no effect on people had cancer or who had recently been treated for cancer.

Dr. Ollila said that is crucial information, and it allowed him to better inform his patients on how to keep themselves safer.

“We had to tell our patients that… we’re glad you’re vaccinated, but act like you’re not,” he said.