The Westport soccer team crushed a young Diman team 5-0 on Monday, steam rolled Southeastern Regional Voc 4-2 at home on Wednesday and shut out Bristol-Plymouth 3-0 in their first league game on … 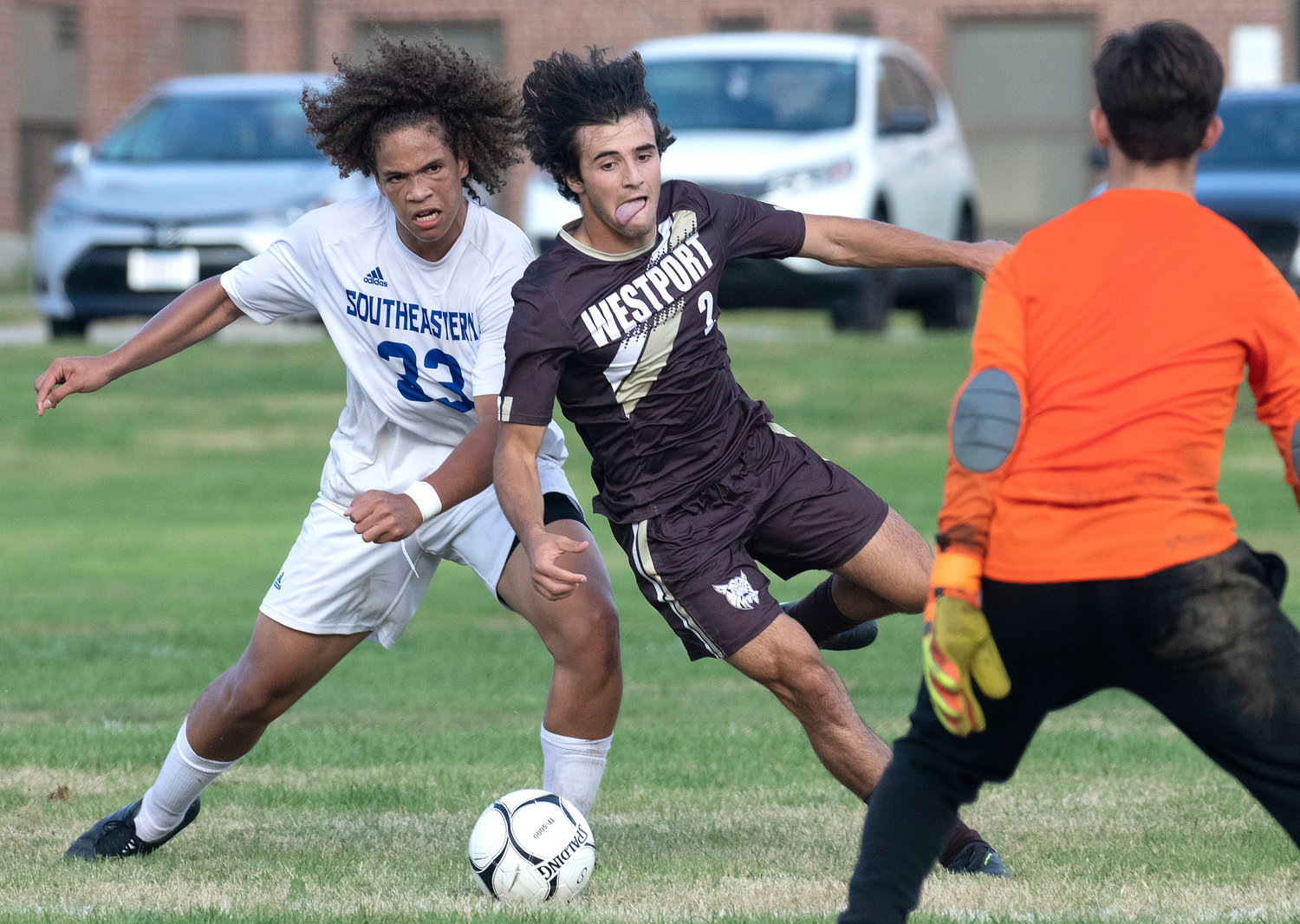 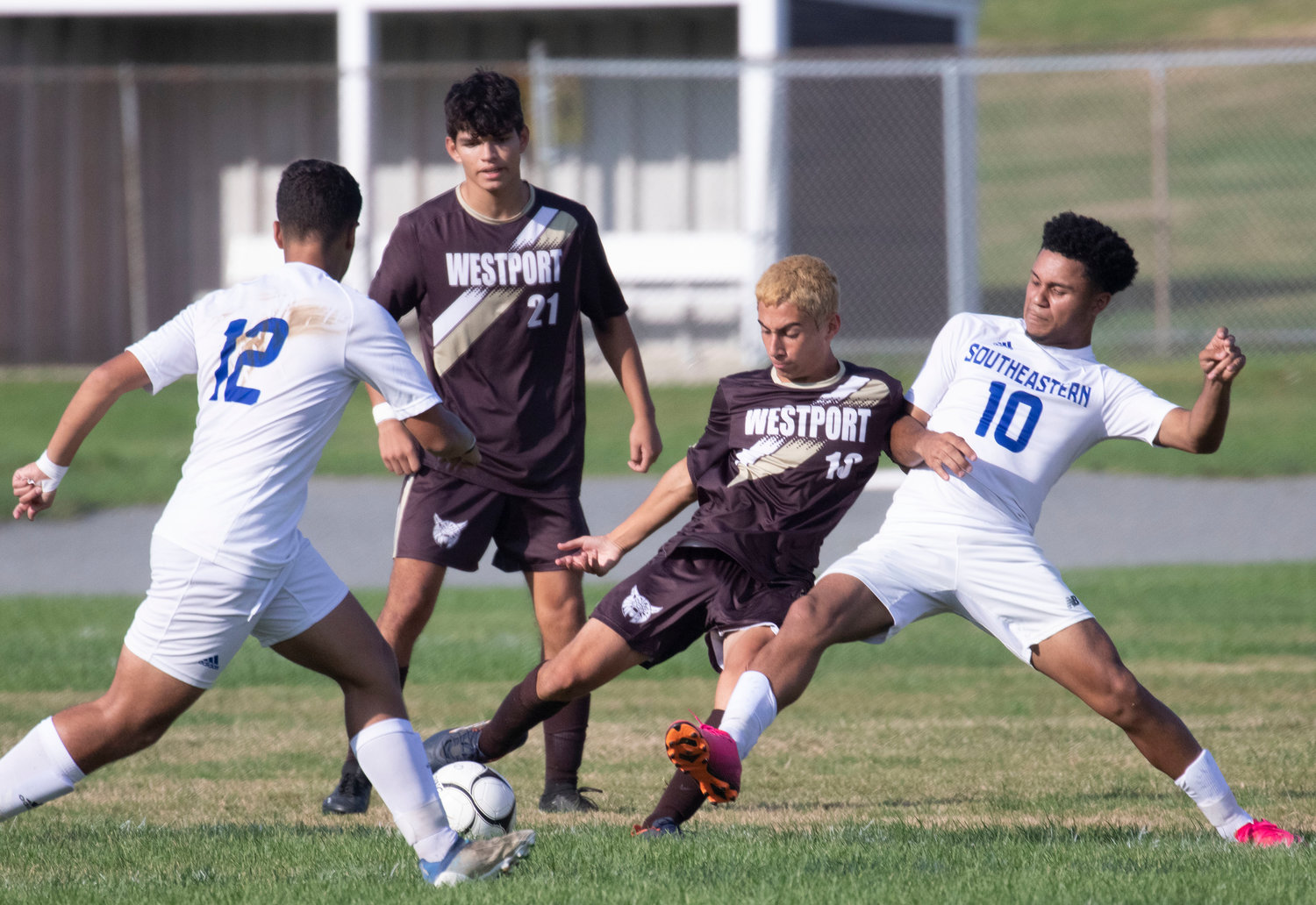 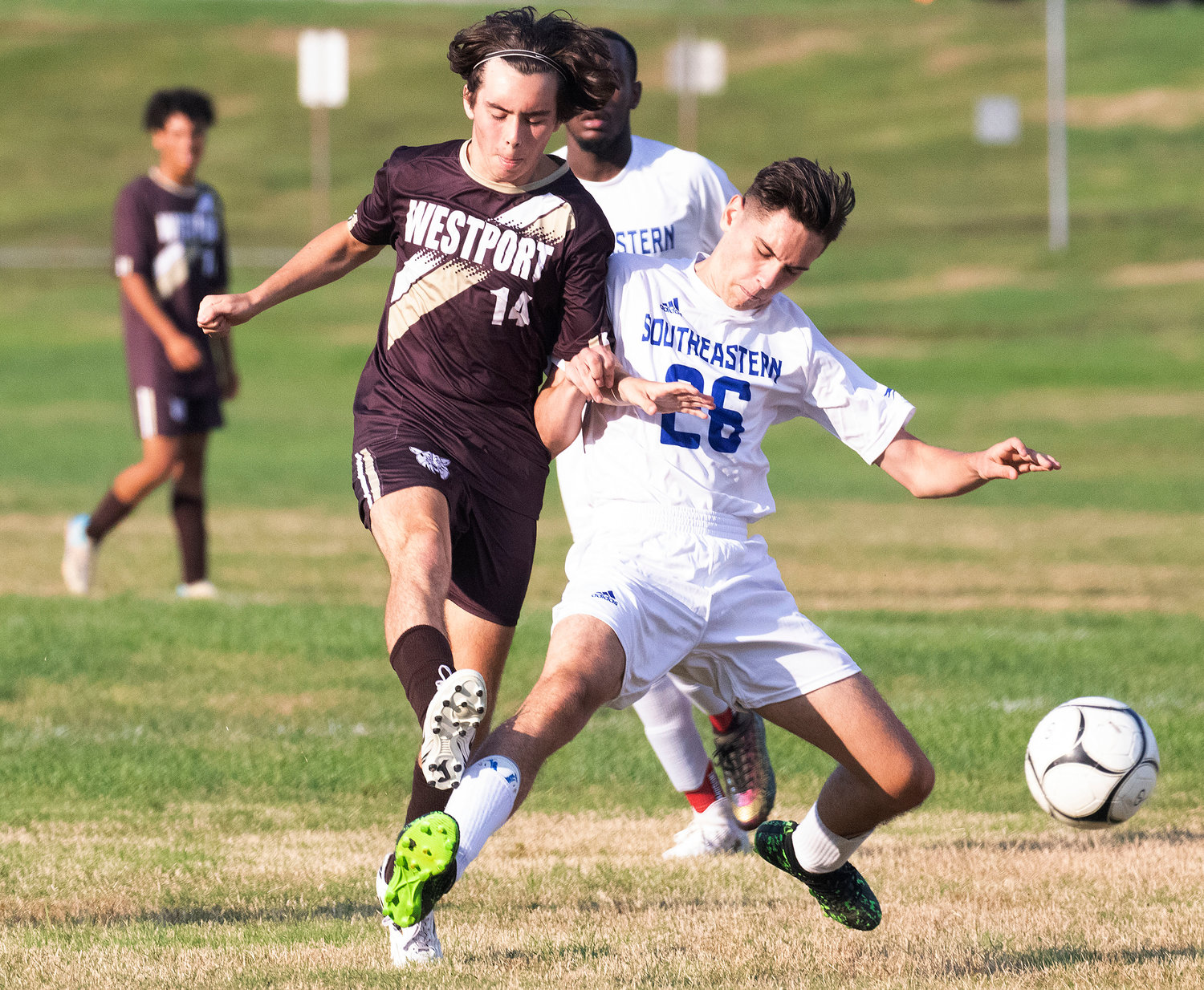 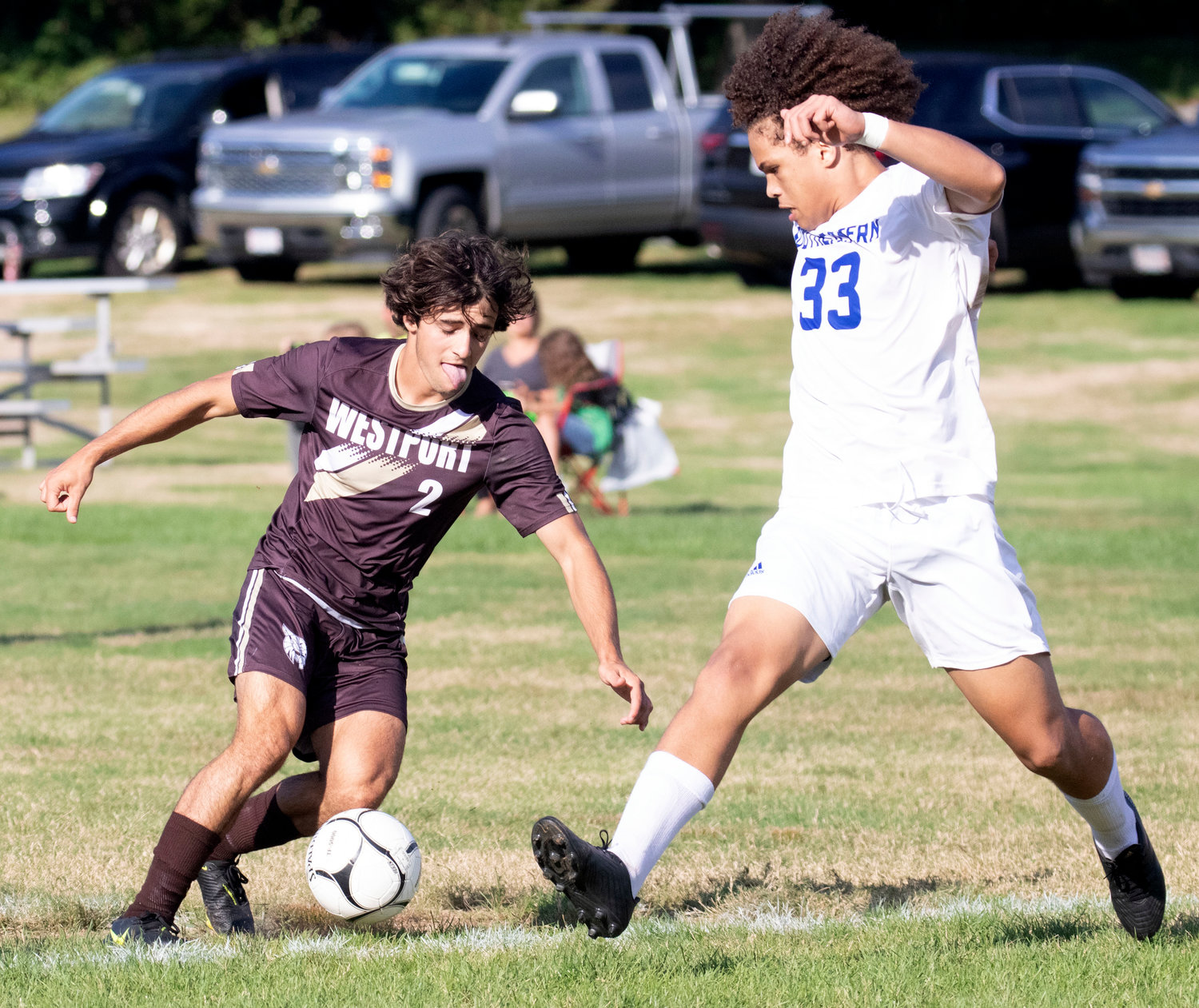 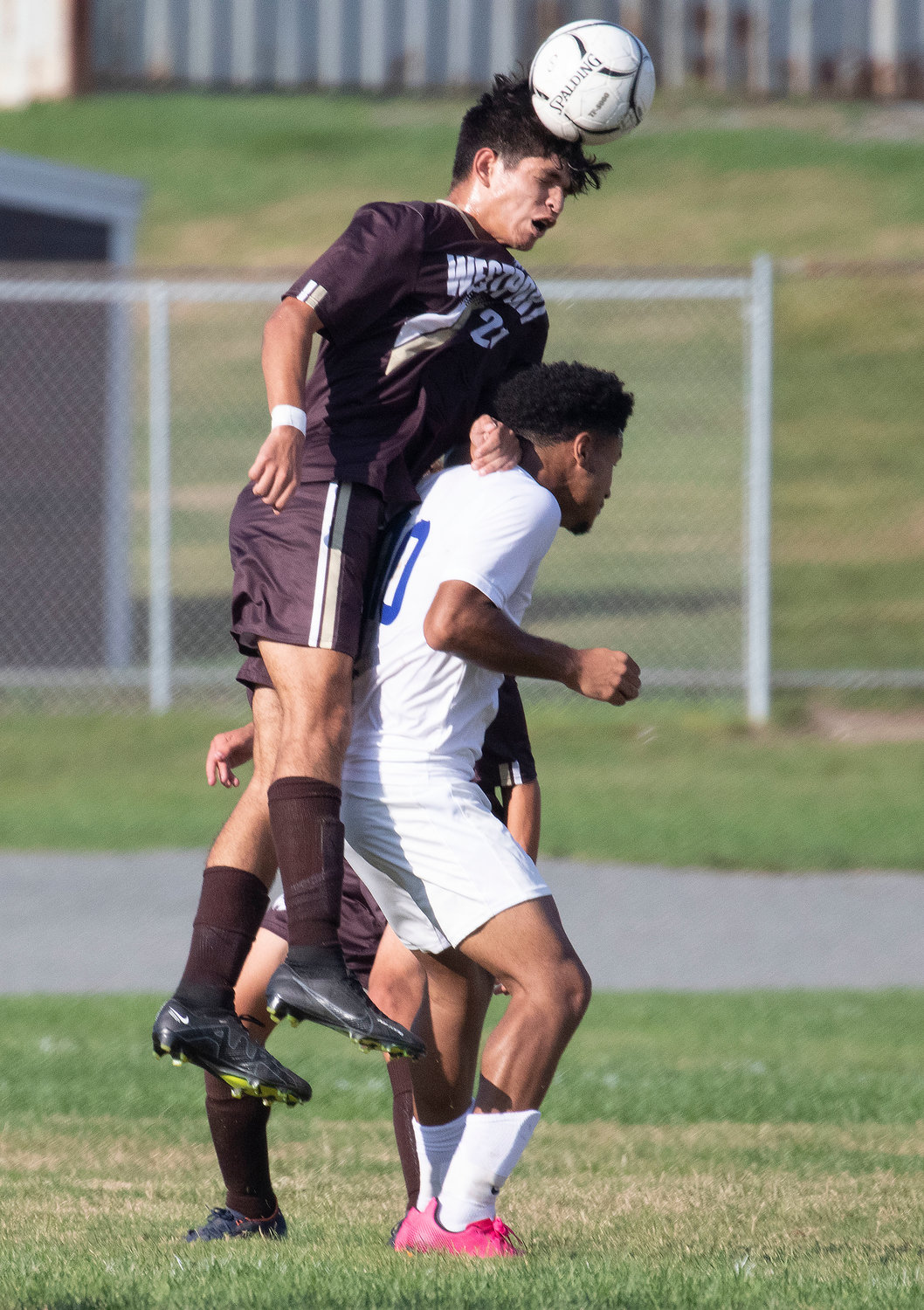 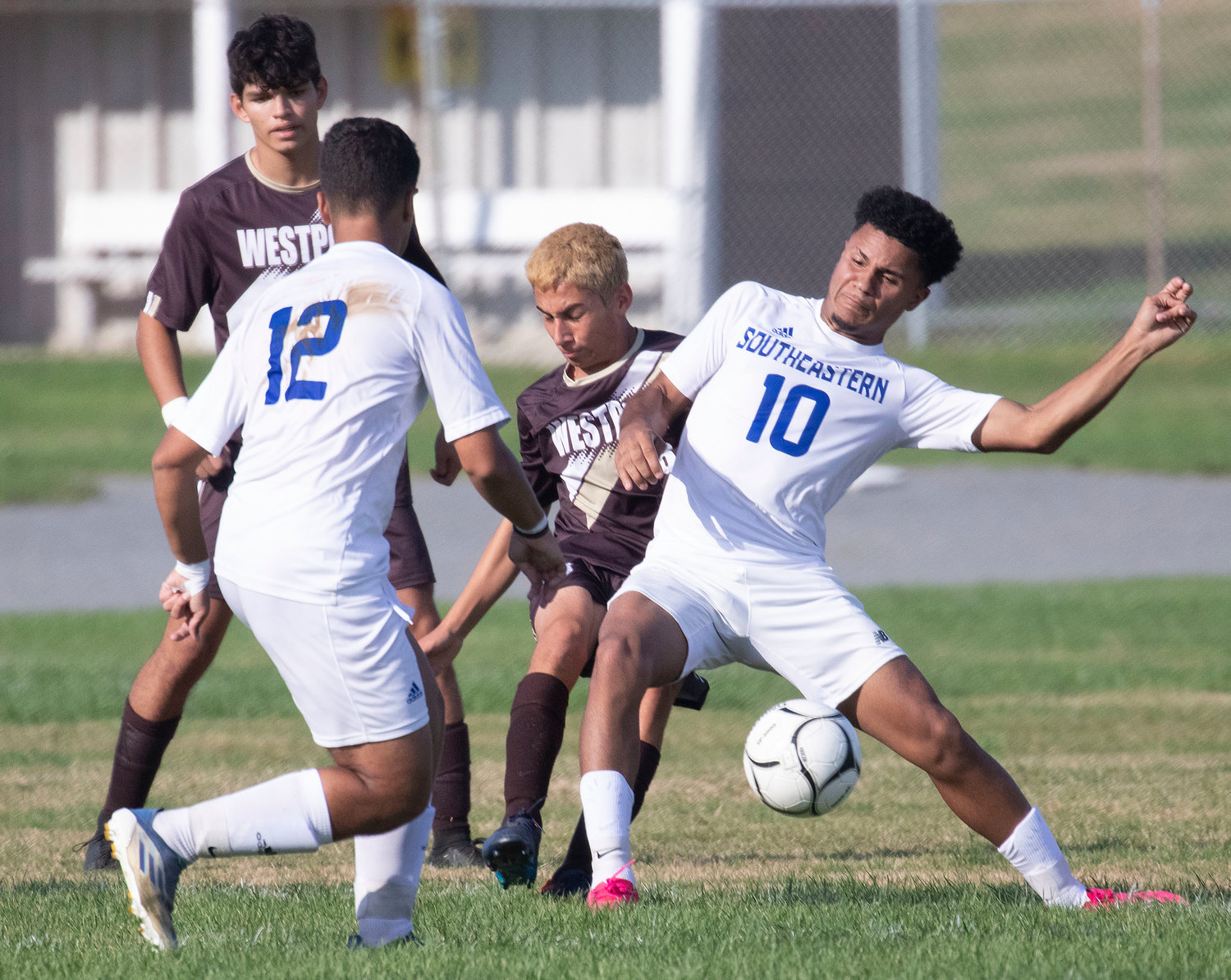 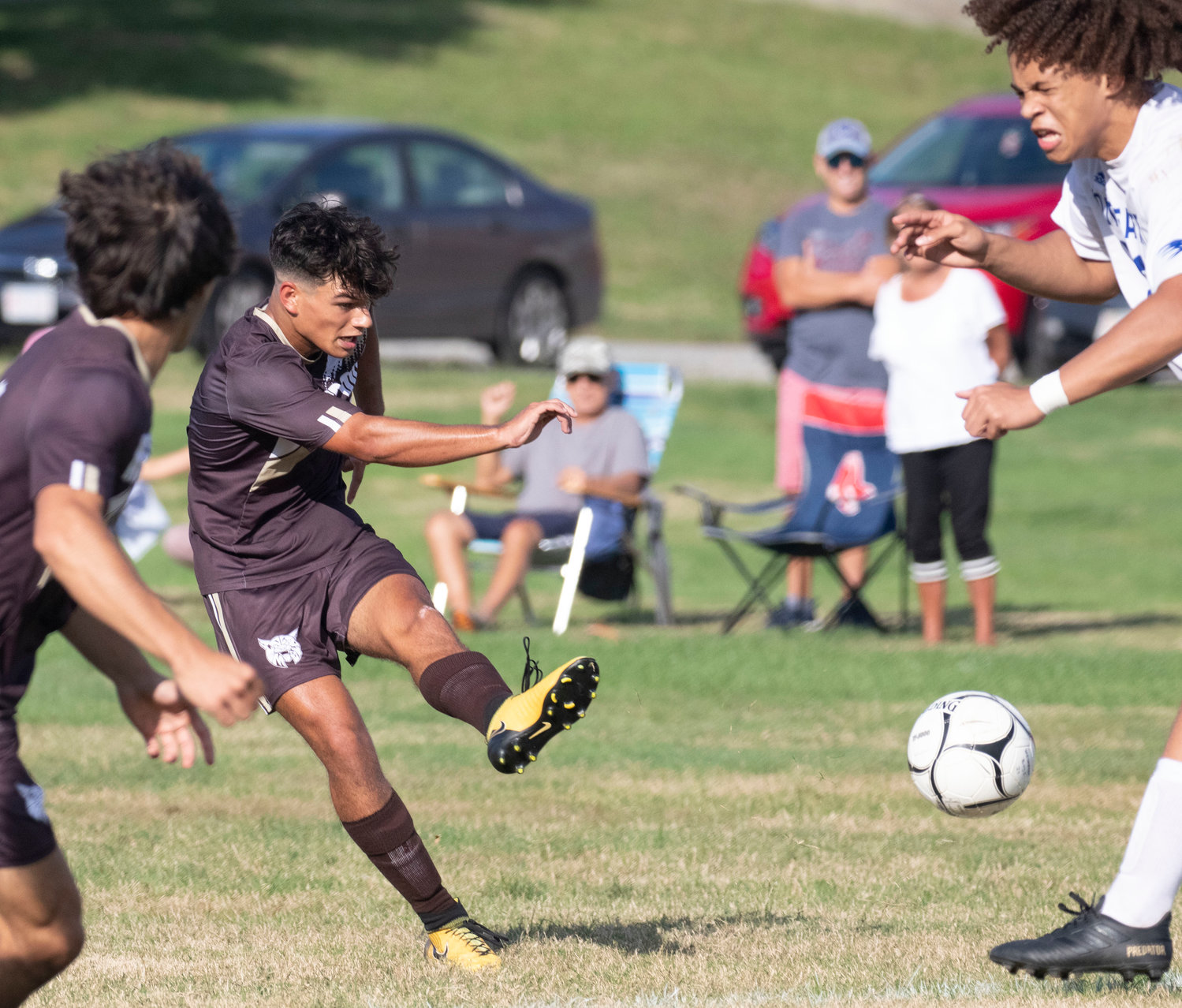 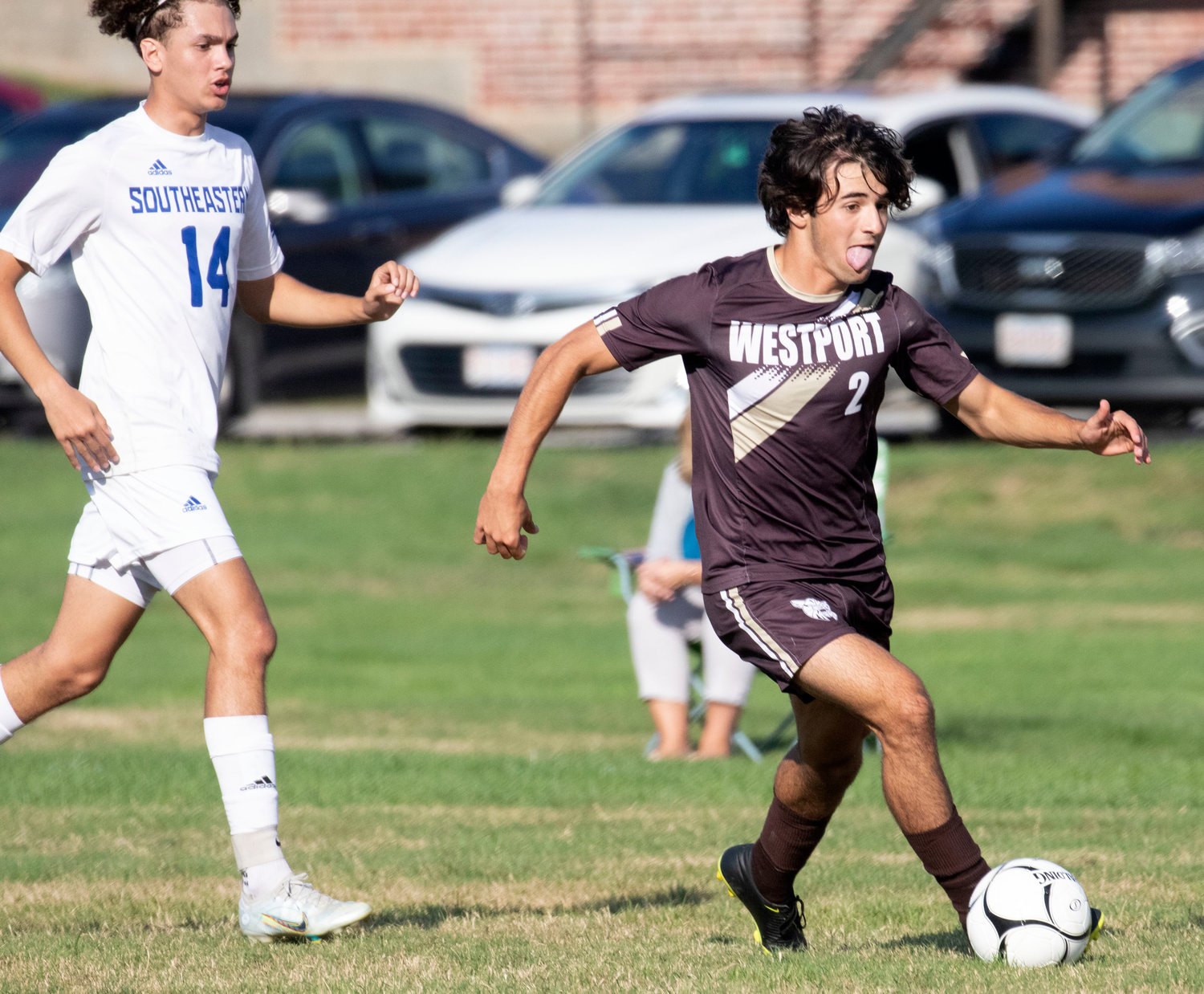 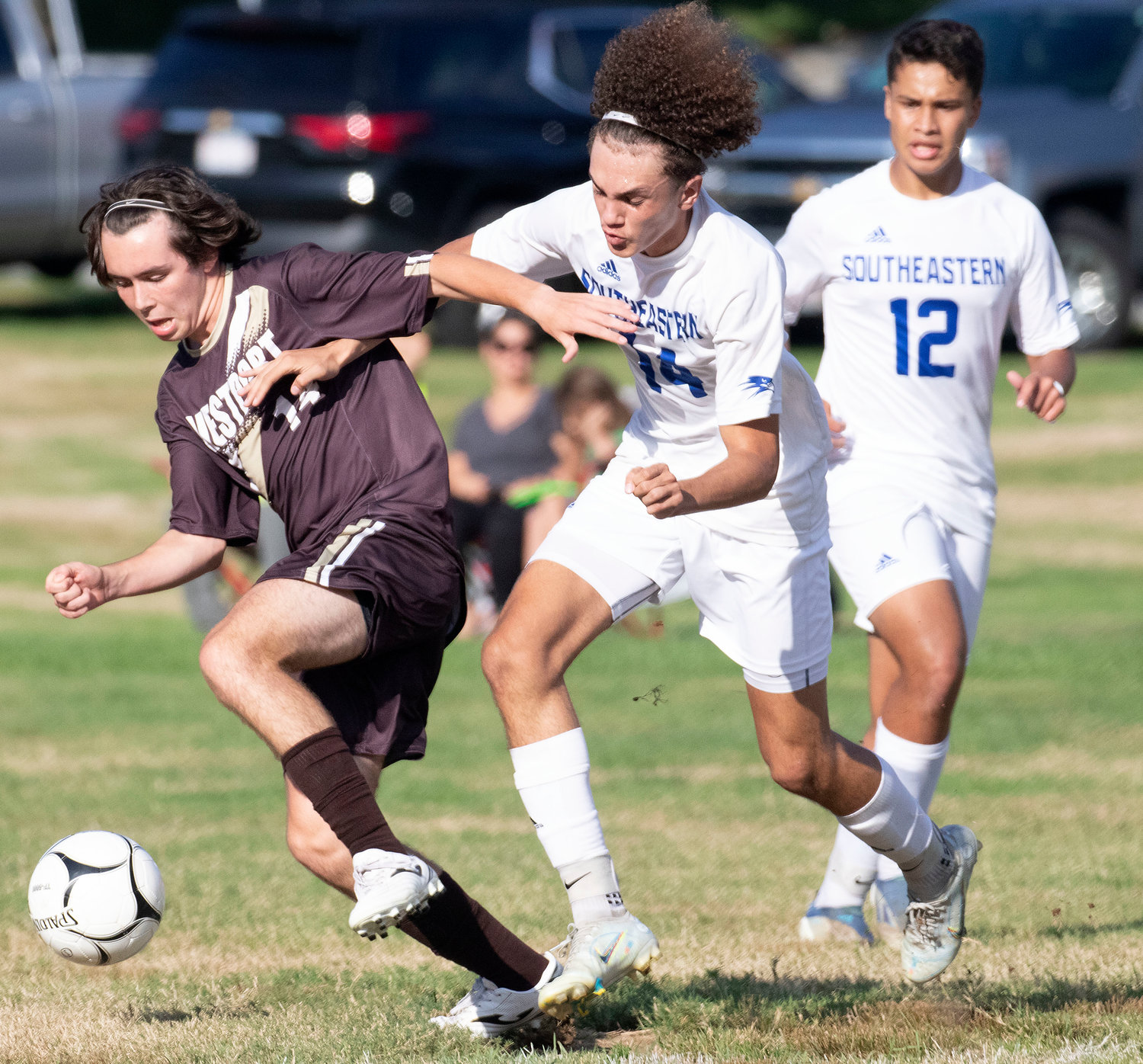 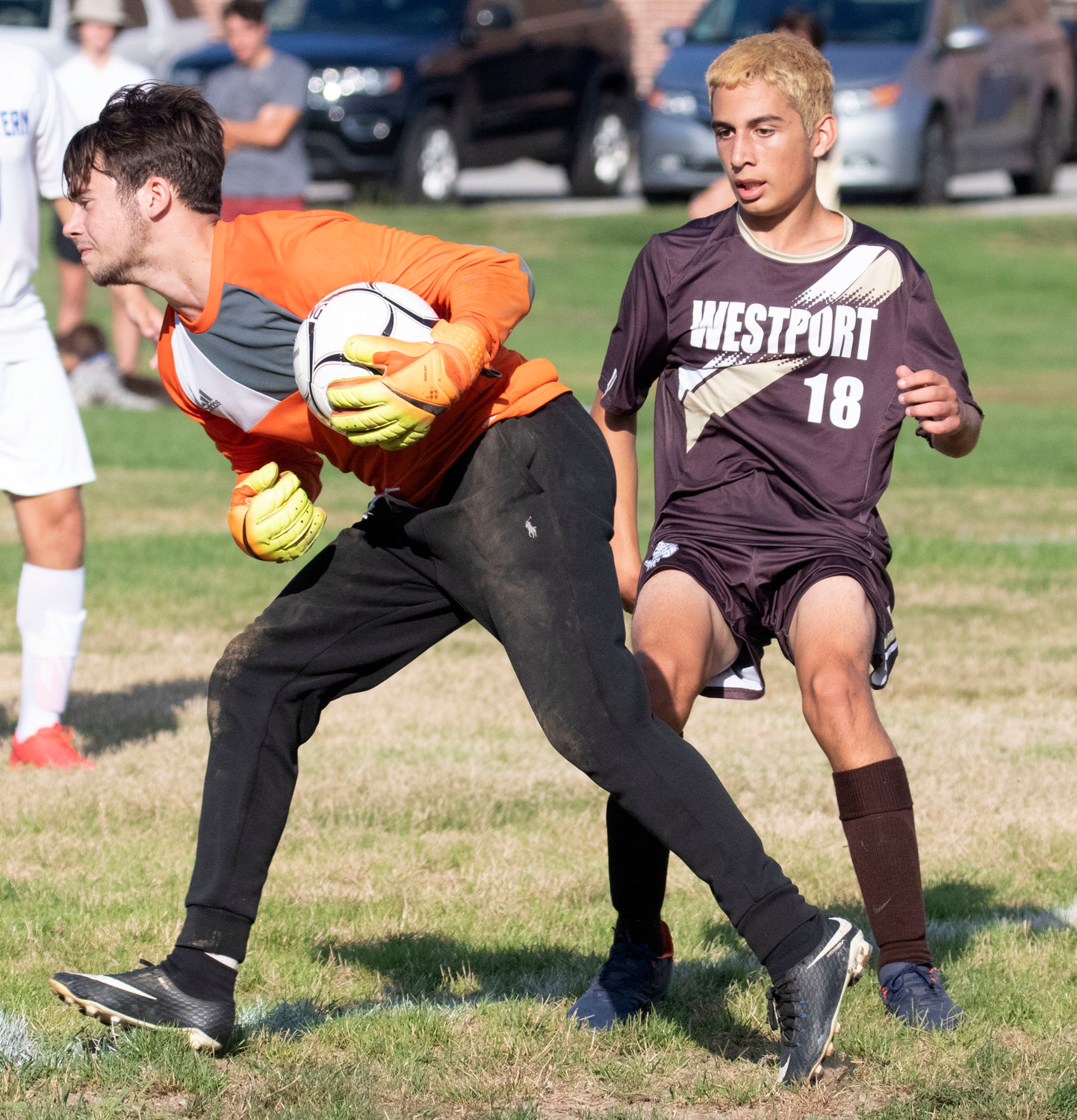 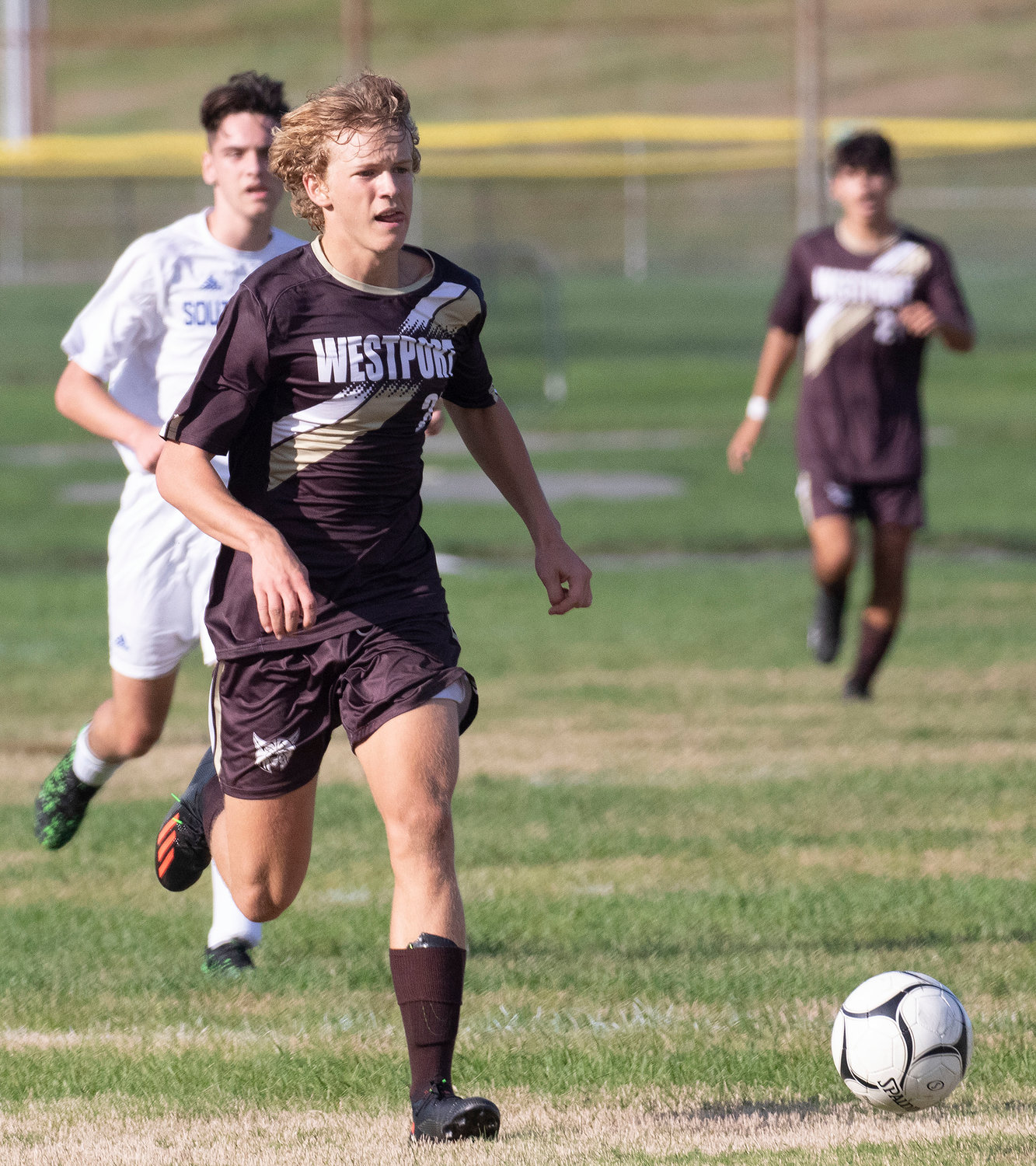 Hunter Brodeur dribbles around goalkeeper Caden Brasill and makes a pass to a teammate during the game. 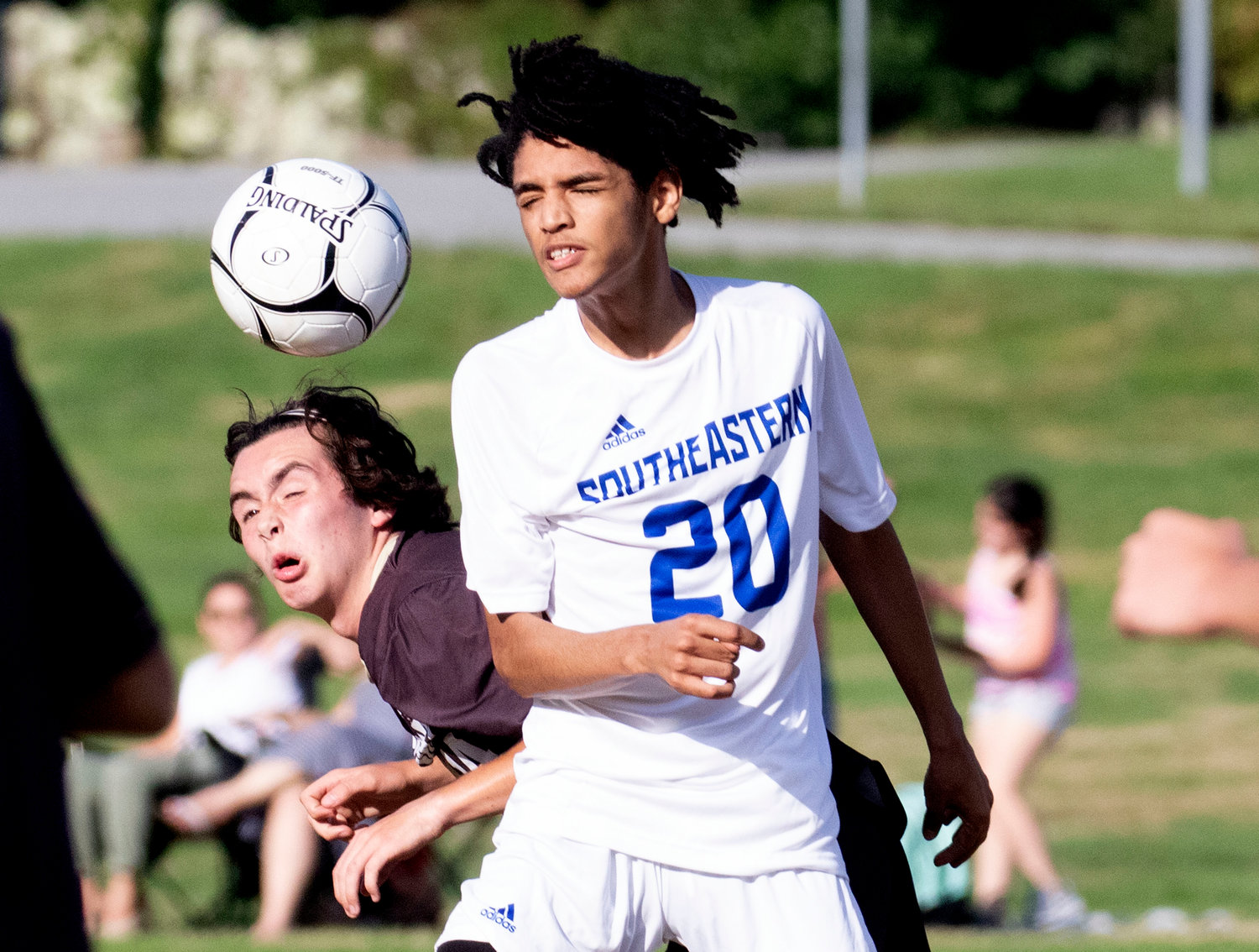 Midfielder Ben Novo attempts to knock down a Warriors’ pass. 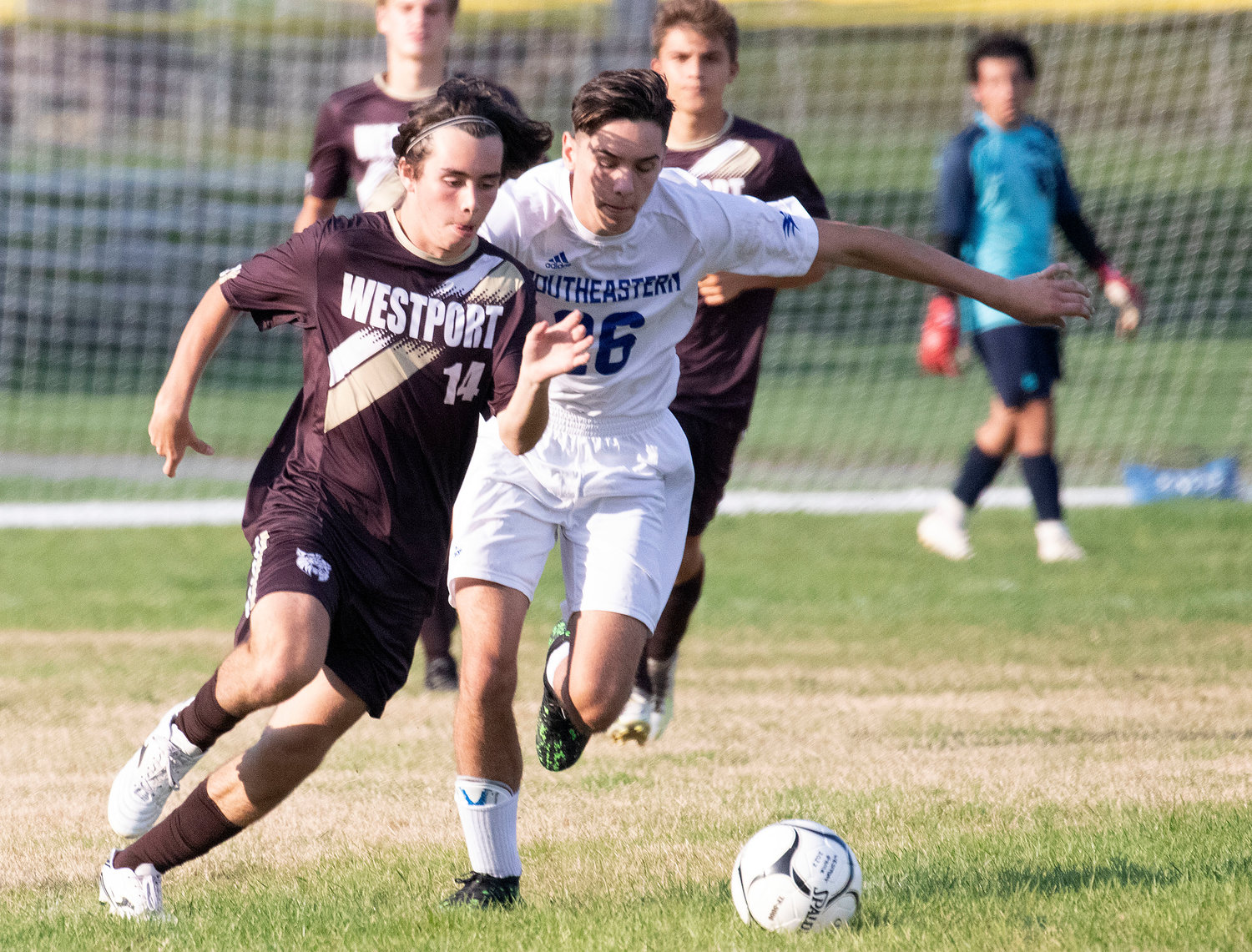 Midfielder Ben Novo dribbles around a Warriors defender during their home win over Southeastern Regional on Wednesday. 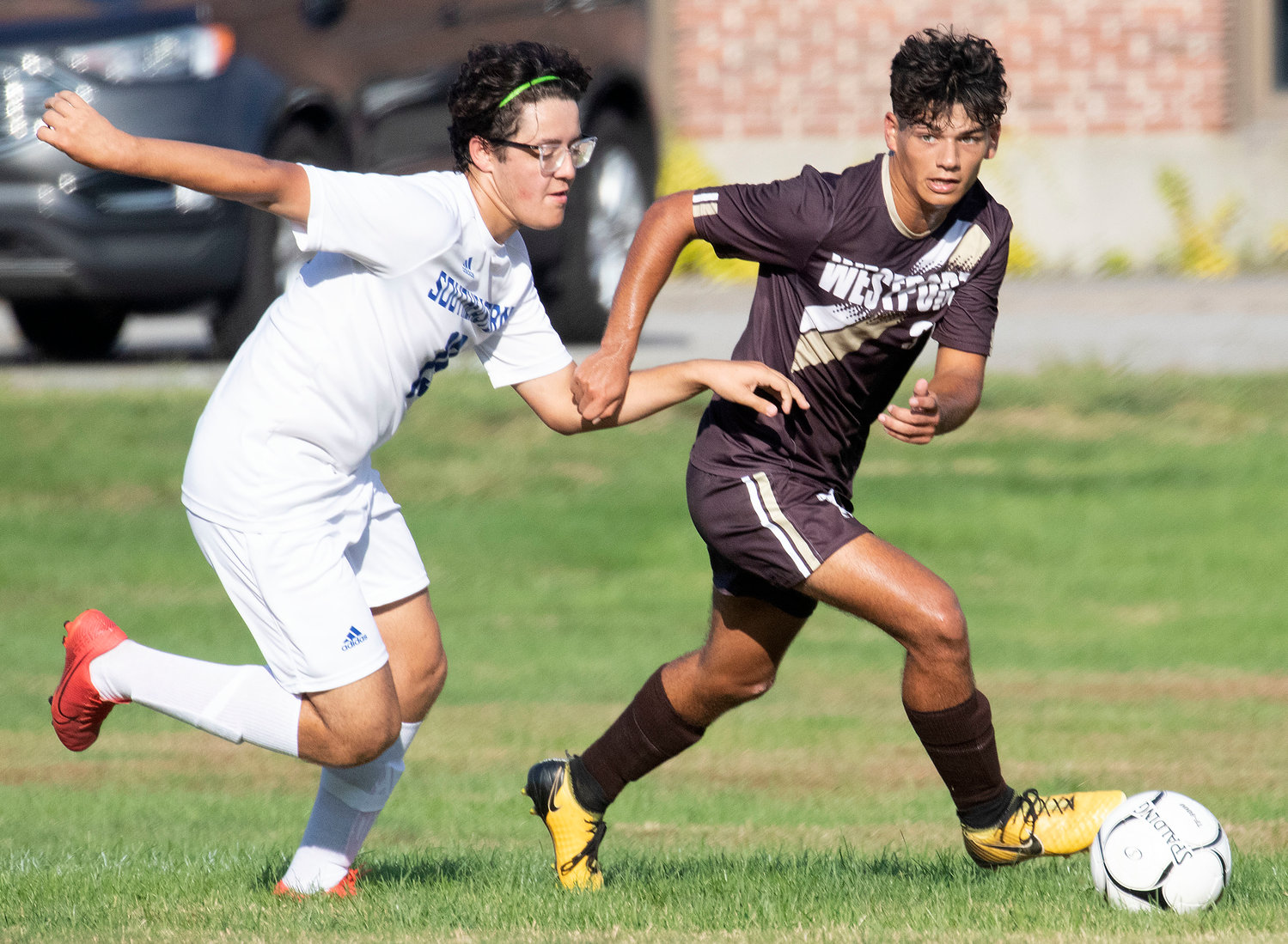 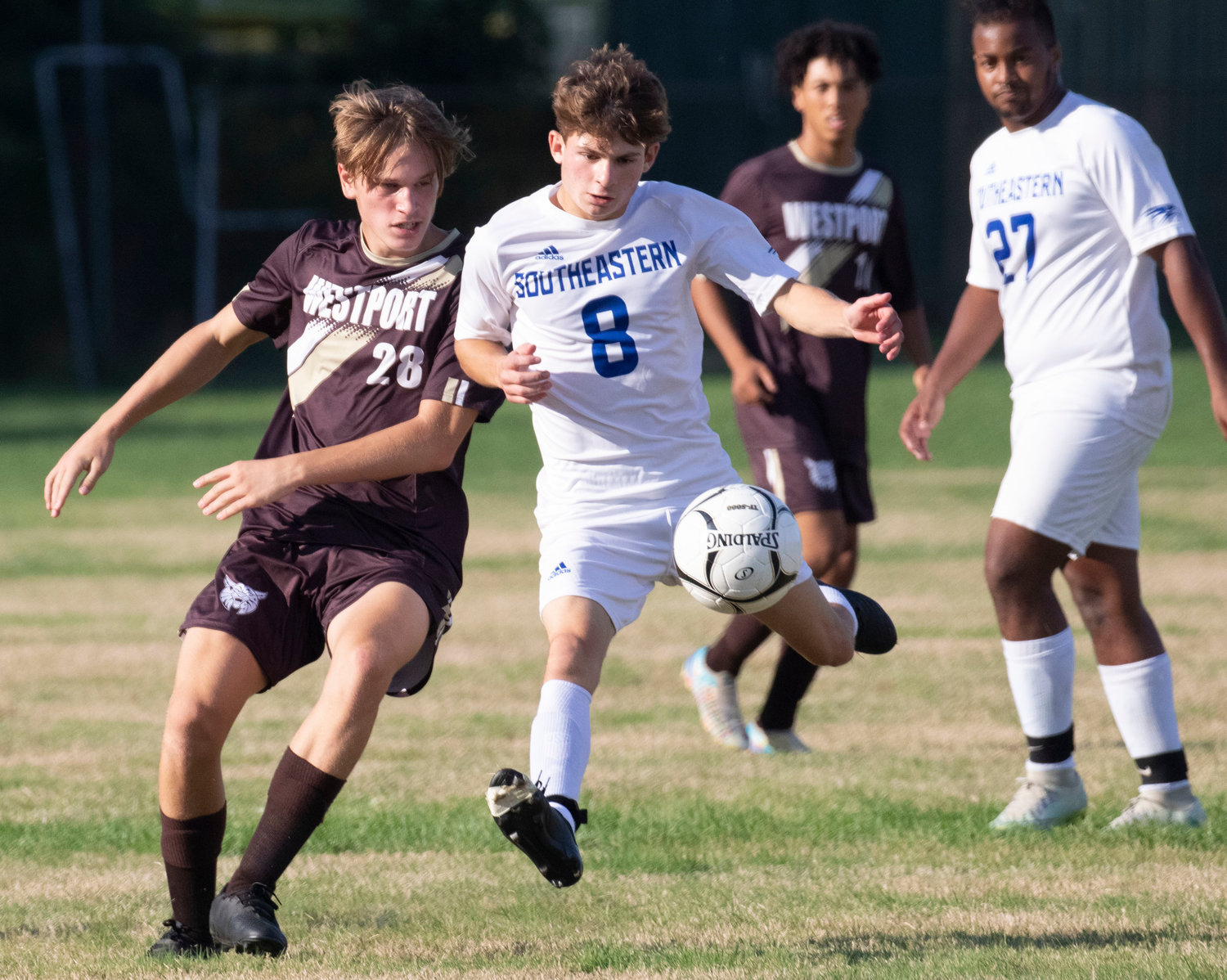 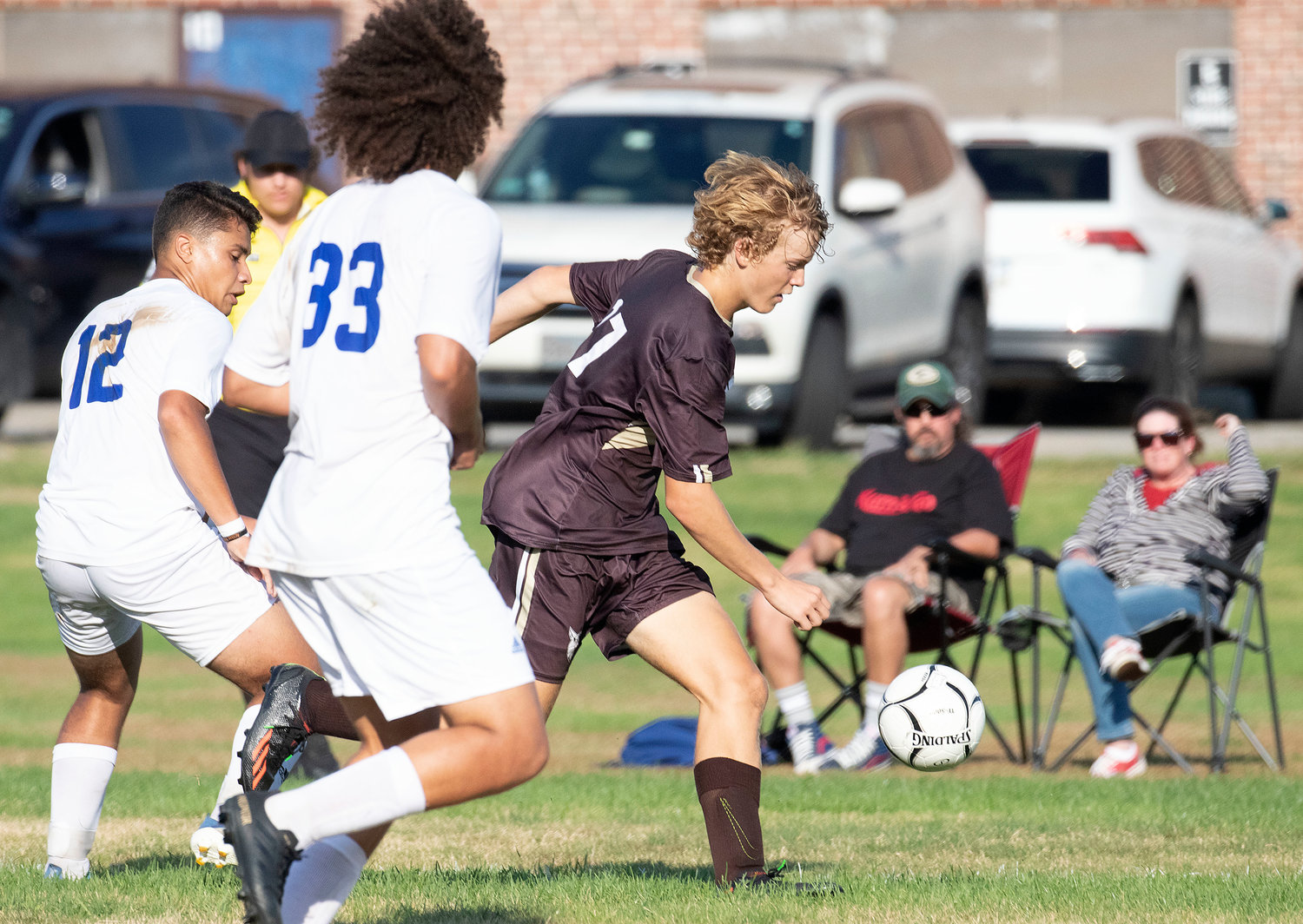 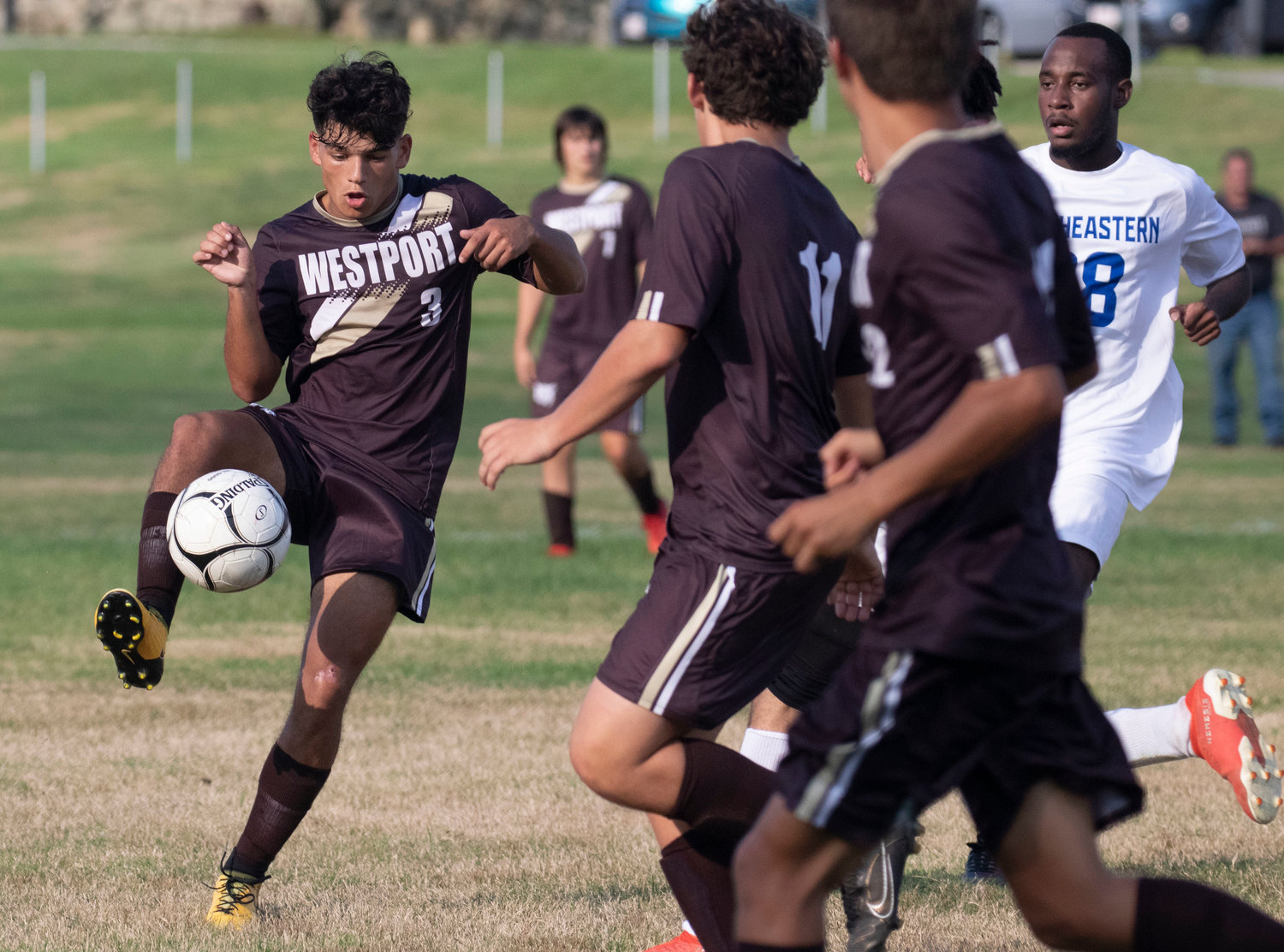 Senior captain and midfielder Coltrane McGonigle heads down a pass at midfield.
Previous Next
Posted Saturday, September 17, 2022 10:08 am

...It’s no secret, we believe we can win it all this year. We have the talent and the leadership, which is really critical.”
Wildcats head coach Chris Parker
Photos and story by Richard W. Dionne, Jr.

The Westport soccer team crushed a young Diman team 5-0 on Monday, steam rolled Southeastern Regional Voc 4-2 at home on Wednesday and shut out Bristol-Plymouth 3-0 in their first league game on Friday to kick off the season at 3-0. Senior striker Hunter Brodeur scored two goals and assisted on another in Wednesday’s game against Southeastern Regional Voc-Tech. With the fast start and many skilled starters back in the lineup, the Wildcats have a terrific chance to unseat Mayflower league champs West Bridgewater this season after coming off a deep playoff run losing in the Division 5 final four. “Our number one goal is to win our league, which we haven’t won in my five years,” said Westport head coach Chris Parker. “Number two goal, make it to the tournament and number three goal, make a deep run. It’s no secret, we believe we can win it all this year. We have the talent and the leadership, which is really critical.”

Coach Parker and the players believe that this group has the skills, determination and leadership to get the job done.

“We have high expectations for ourselves,” echoed Brodeur. “Honestly, I think this year we have a little more experience. Last season we didn’t start very well. This season, we are off to a good start. We have been playing all summer and I feel that we are right on track. We just got to go out and execute.”

Plus the Wildcats performed a ton of preparation work over the summer according to Coach Parker. They were committed to their strength and conditioning program including the strenuous, “Pitch Warrior Boot Camp.” The team also participated in a summer league against strong teams like Bishop Stang, Dartmouth and Old Rochester Regional.

“They came to camp far more advanced in terms of their technical skills and their tactical awareness and it showed,” Coach Parker said. “They are lightyears ahead of where we normally are.”

Wildcats dominate to build the lead against Warriors

Westport dominated Southeastern Regional at times and looked far superior. But the team became complacent after building a 4-1 lead. Brodeur a team captain along with fellow seniors Antonio Dutra Africano and Coltrane McGonigle, beat a defender and went in one on one against Warriors goalkeeper Caden Brasill. “I made a little skill move to beat the defender. Then as the goalie came out, I chipped it over him on the right side,” Brodeur said. The ball arched under the crossbar to give Westport a 2-1 advantage in the first half.  His second goal came in the second half after he collected a pass from outside midfielder Dutra Africano in the box. Brodeur dribbled right and then back to his left and blasted a left-footed shot by Brasill to give Westport a 3-1 lead.

McGonigle scored Westport’s first goal by dribbling the ball past Warriors defenders and blasting a shot by Brasill to even the score 1-1 in the first half.

Ben Boudria playing right outside midfielder buried a pass by Brodeur to give Westport a 4-1 lead in the second half.

Westport dominated for most of the game as coach Parker used most of his bench in the non league game. The Wildcats took the their foot off the gas and gave up a Warriors Penalty kick to make it 4-2. Coach Parker wasn’t happy with the team’s performance in the second half, but he said that the team played “stellar” against Diman, a quality opponent.

“This team is deeper than last year’s team,” said Coach Parker about the luxury. “We can go sixteen deep and not have much of a drop off in quality of play. I’ve never had that in my five years coaching here.”

This season the Wildcats are playing a 1-4-5-1 defensive formation “It has served us well over the years,” he said. “It allows us to be a bit more defensively minded too, which is needed once you get into the tournament.”

Westport’s starting eleven are sophomore Noah Amaral is starting at goalkeeper for Westport. “Noah is Dynamite,” said Coach Parker. “He’s been starting since he was in seventh grade. There is no better goalkeeper in the area.”

Back four are center backs Marcos Dutra Africano and Ryan Borges and outside backs Zachary Lopes and Nick DosVais.

Next up: The Wildcats play three straight home games against Bishop Connolly on Tuesday at 3:30 p.m., Avon on Thursday at 3:30 p.m. and Atlantis Charter on Saturday at noon.