The Wildcats singles players swept their matches as the Westport girls tennis team beat up Bishop Connolly 4-1 during a home match on Wednesday. The win improves the team’s overall record to … 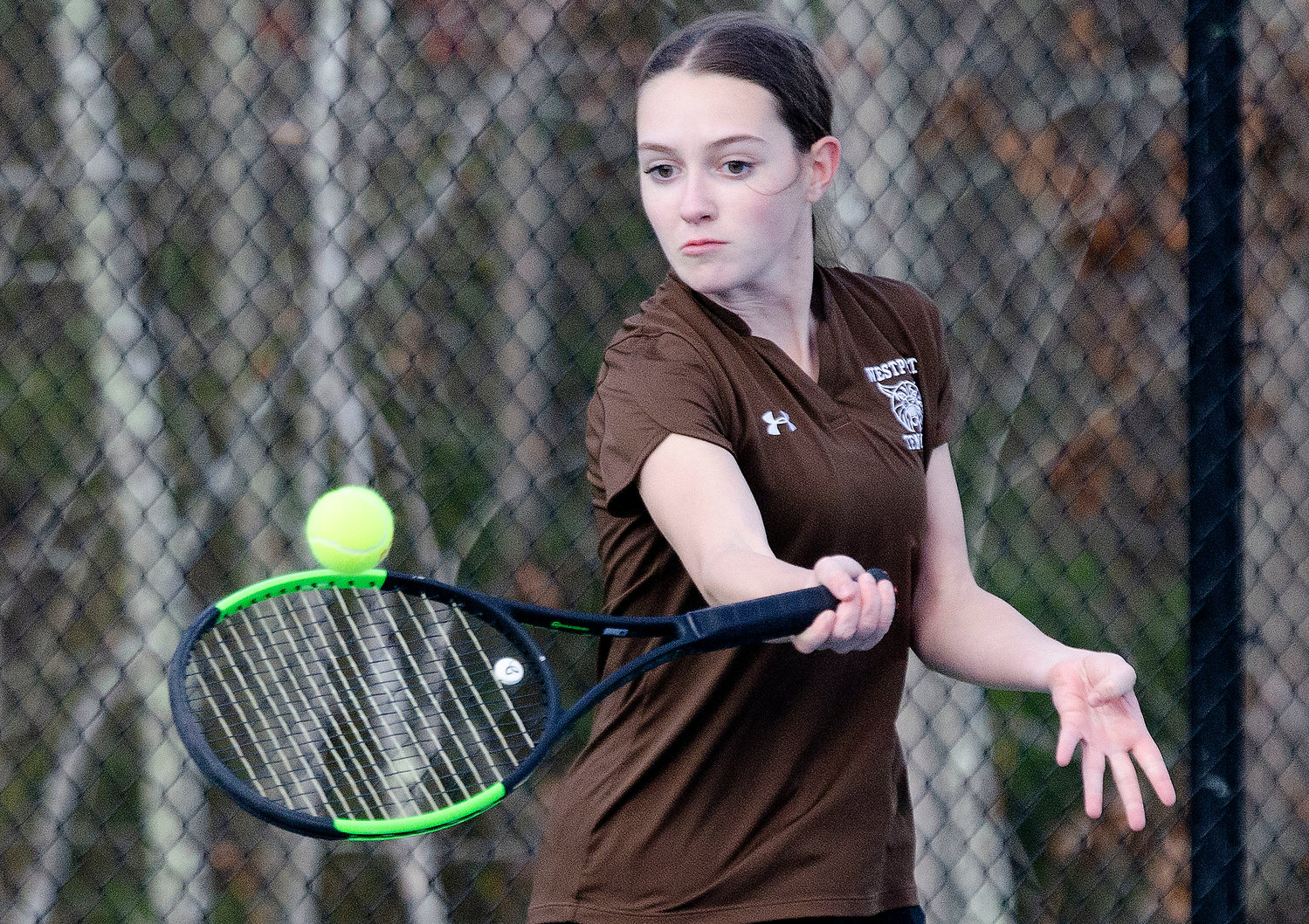 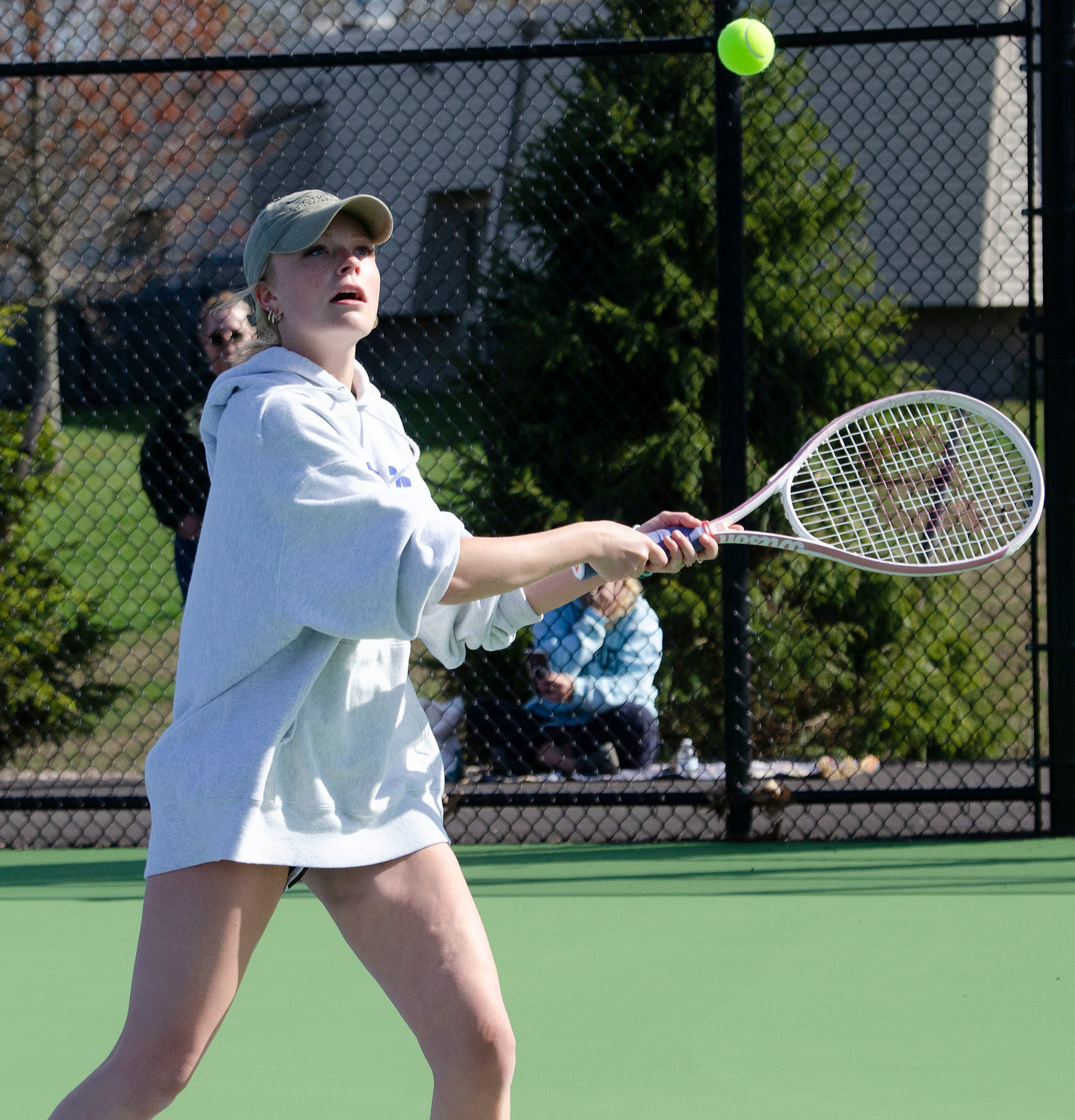 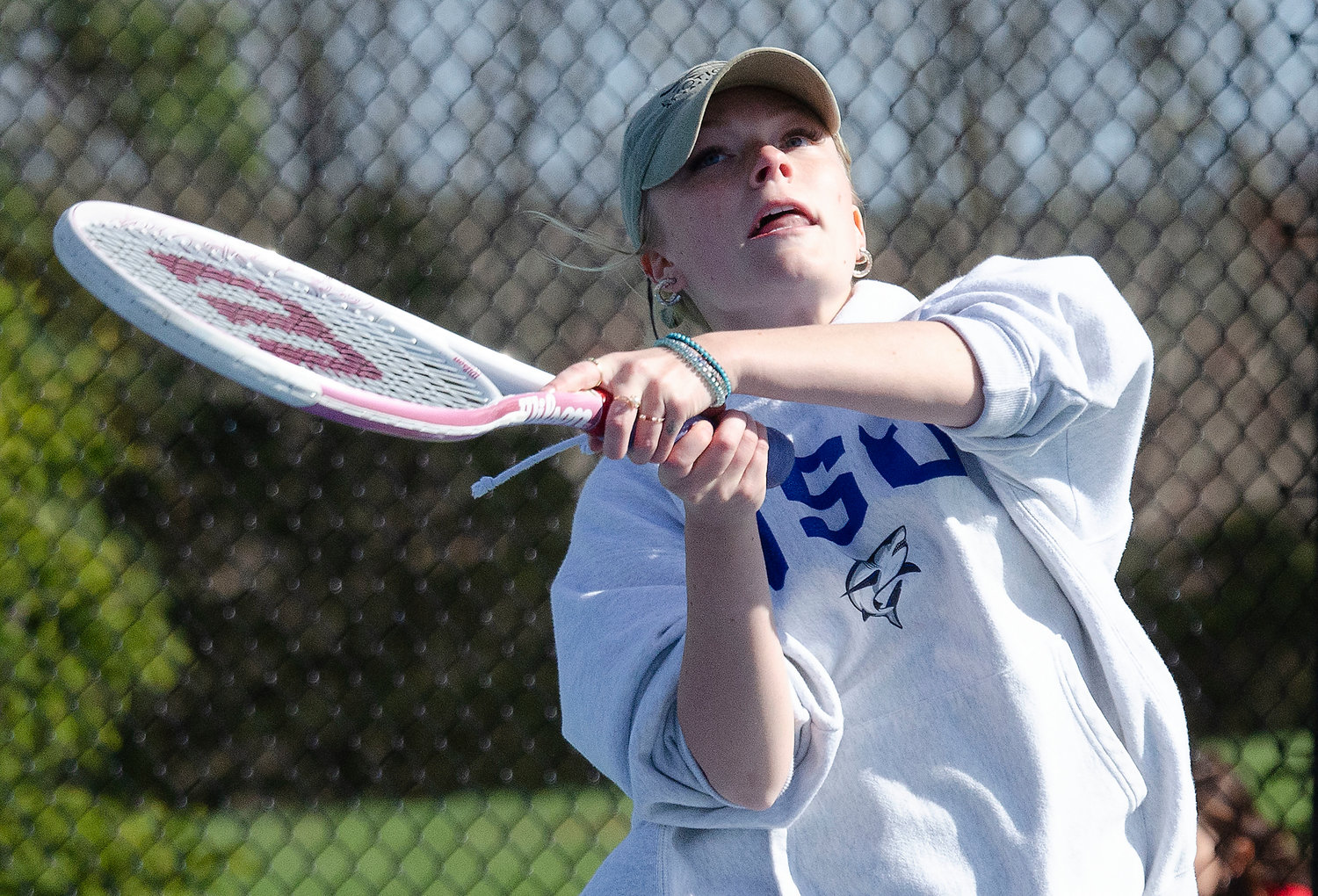 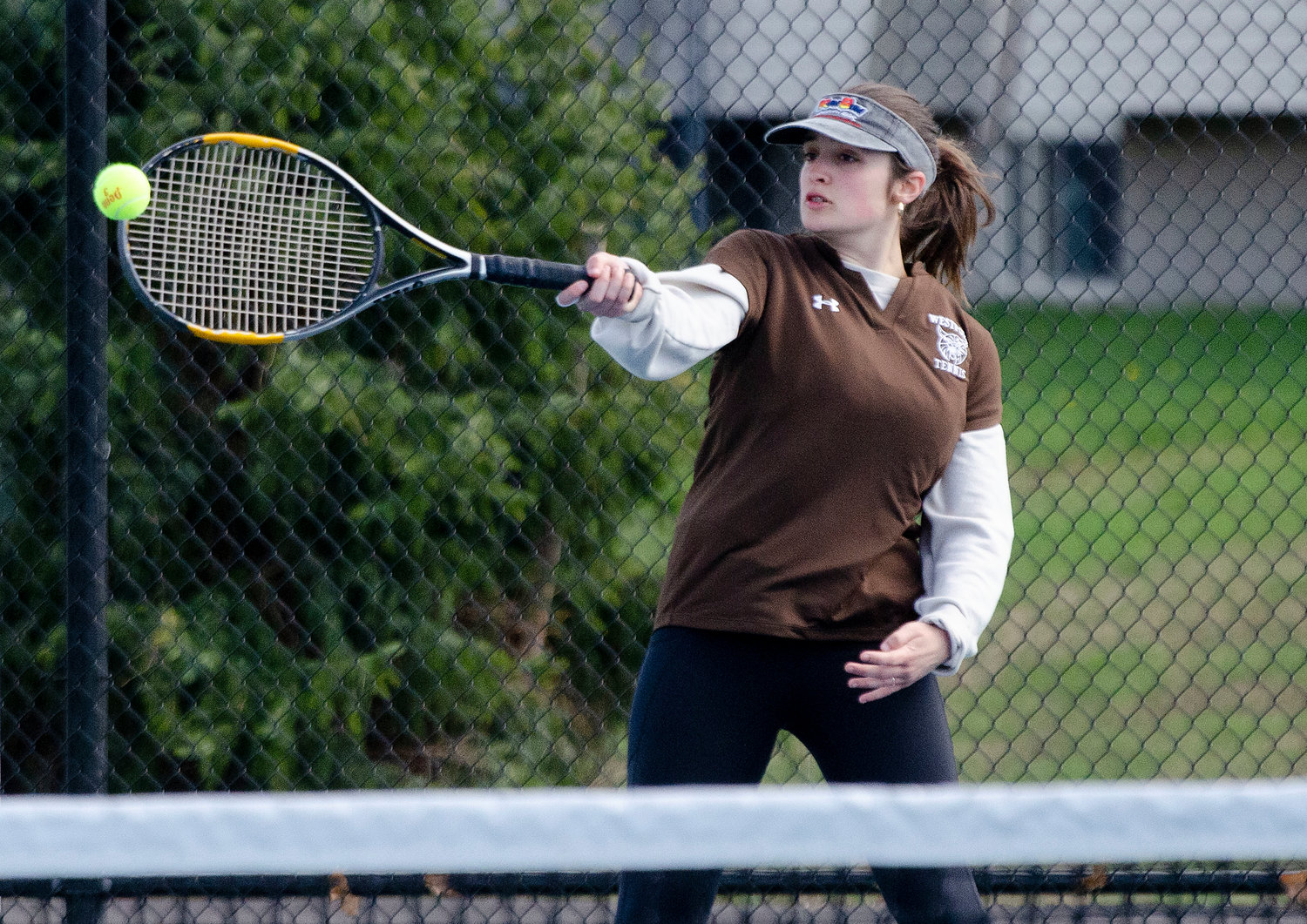 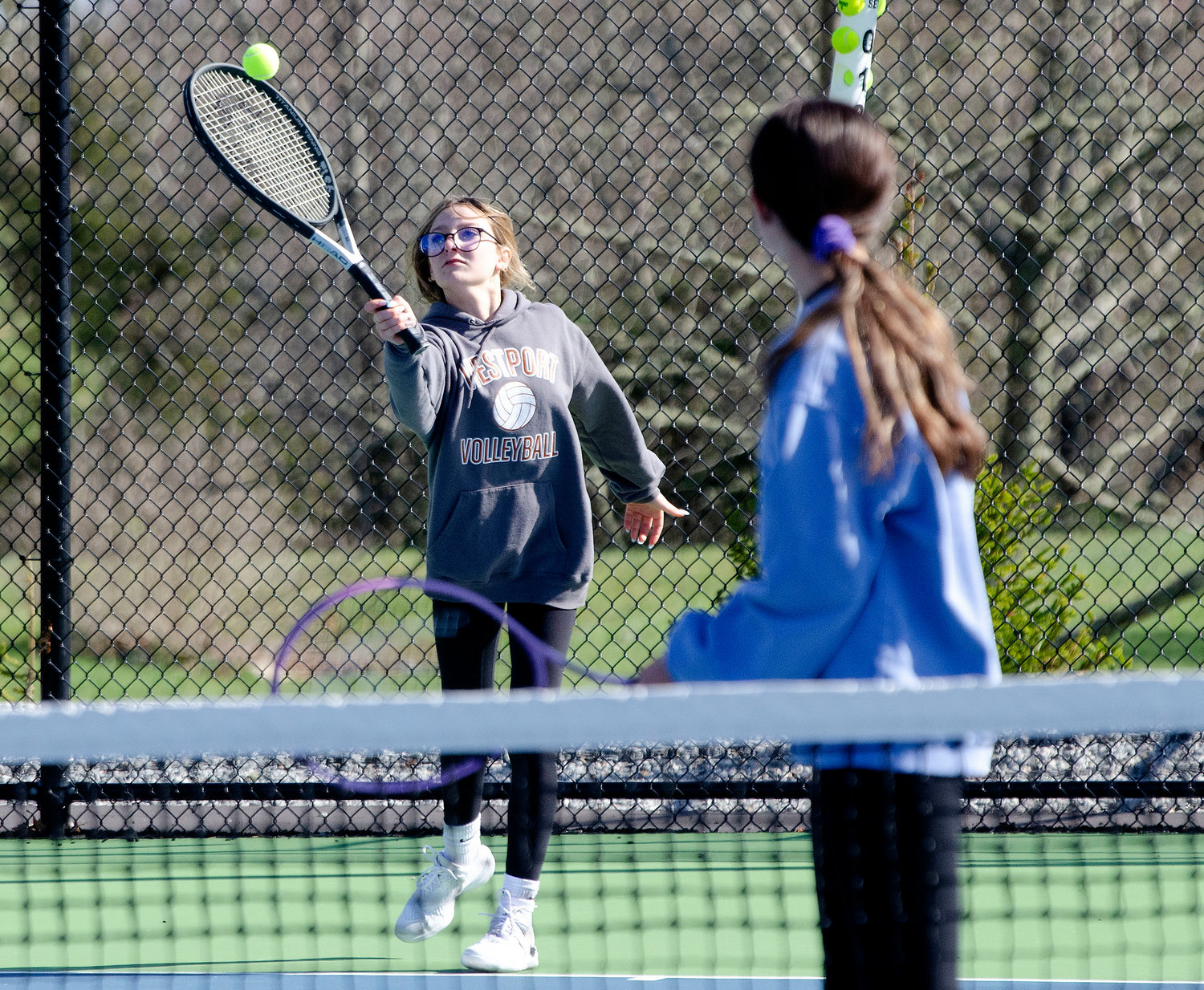 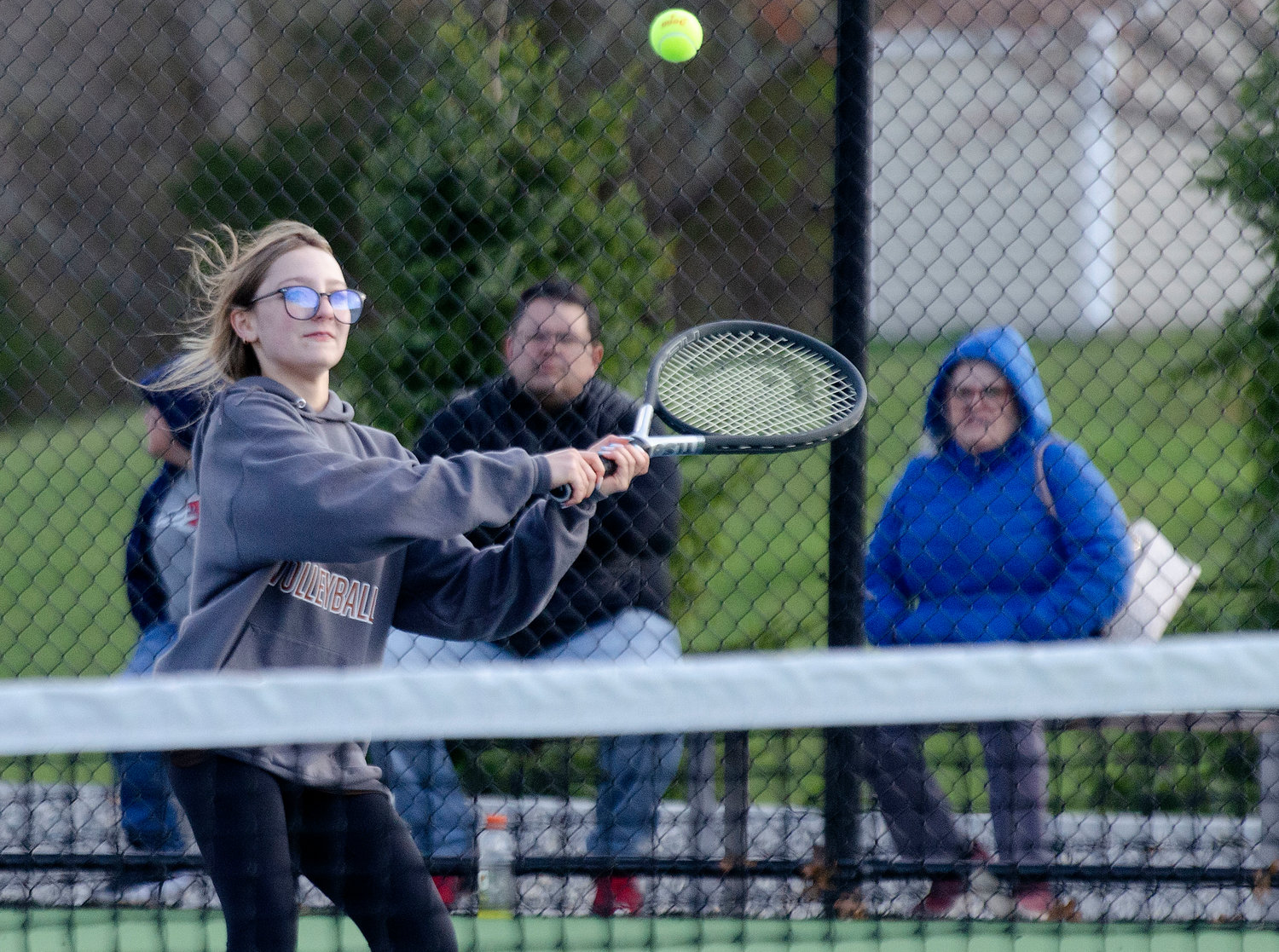 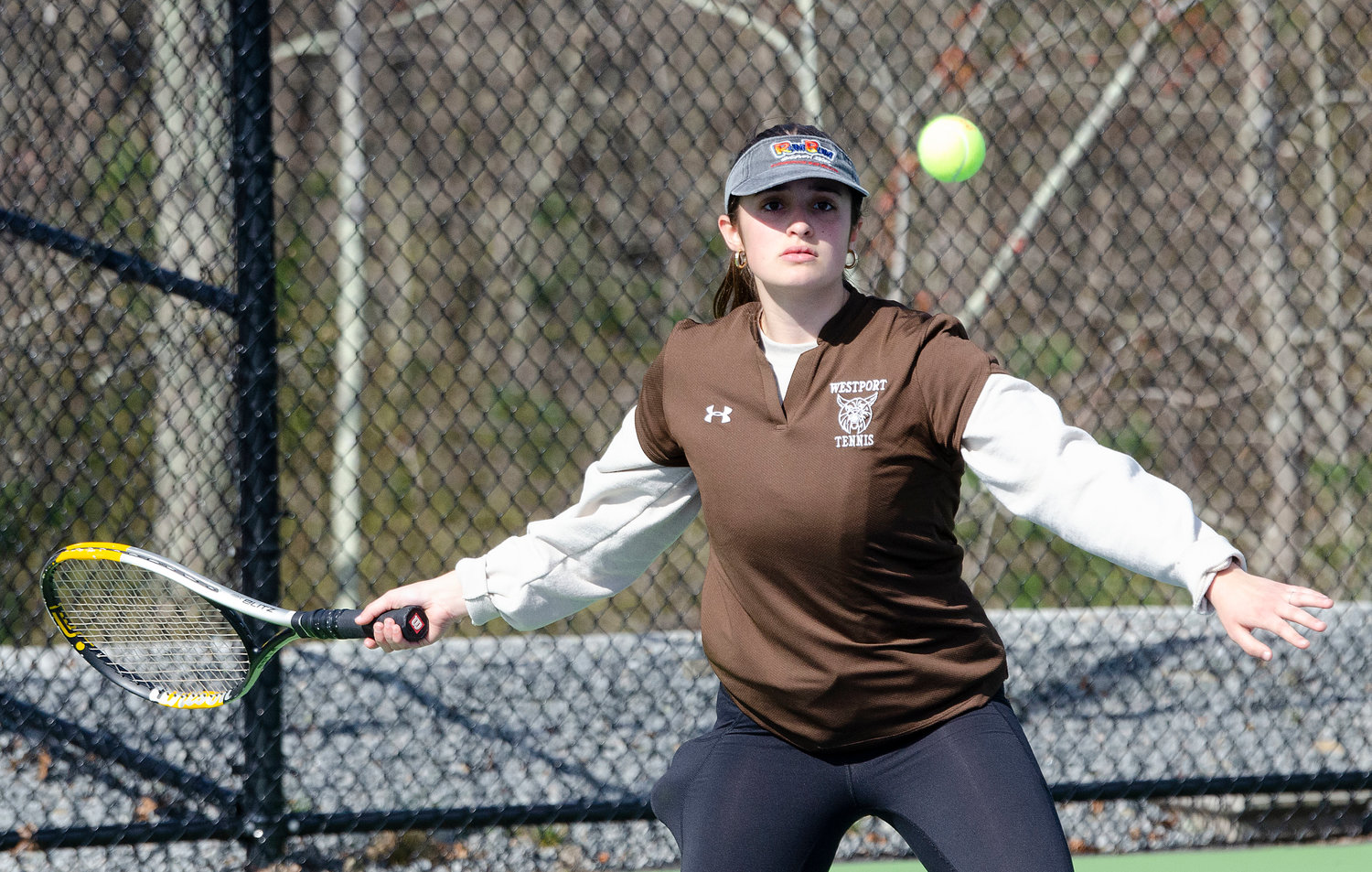 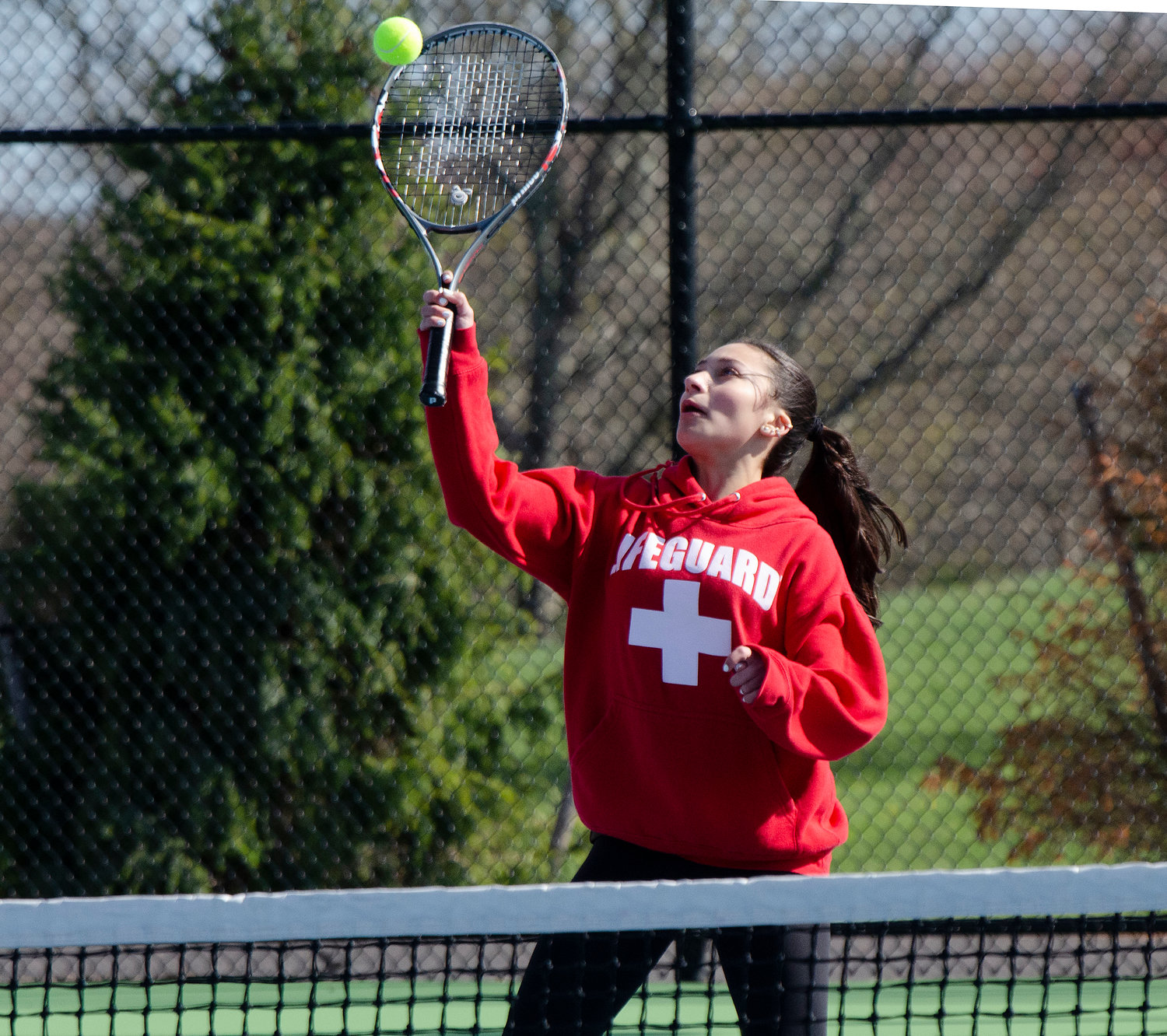 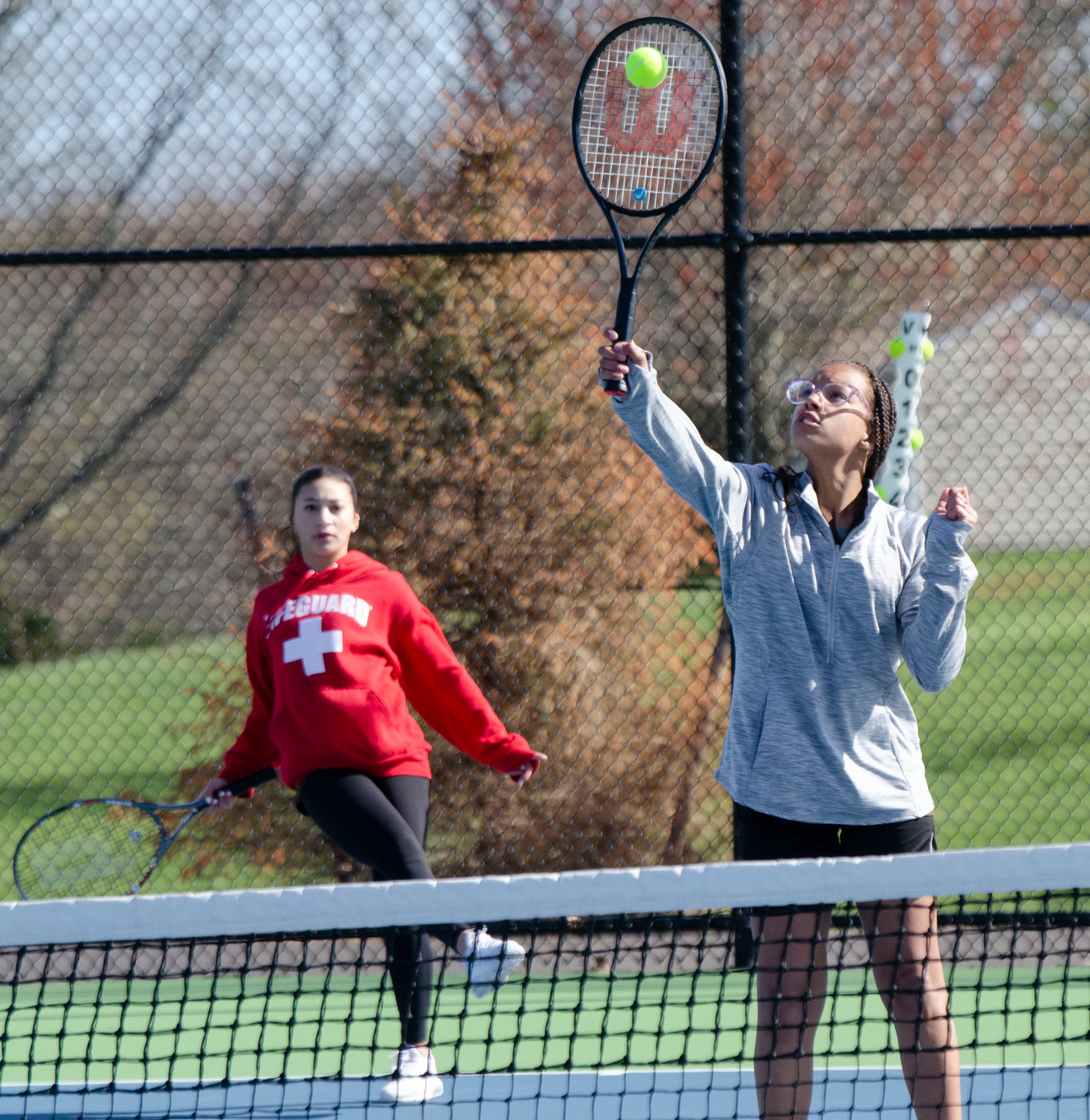 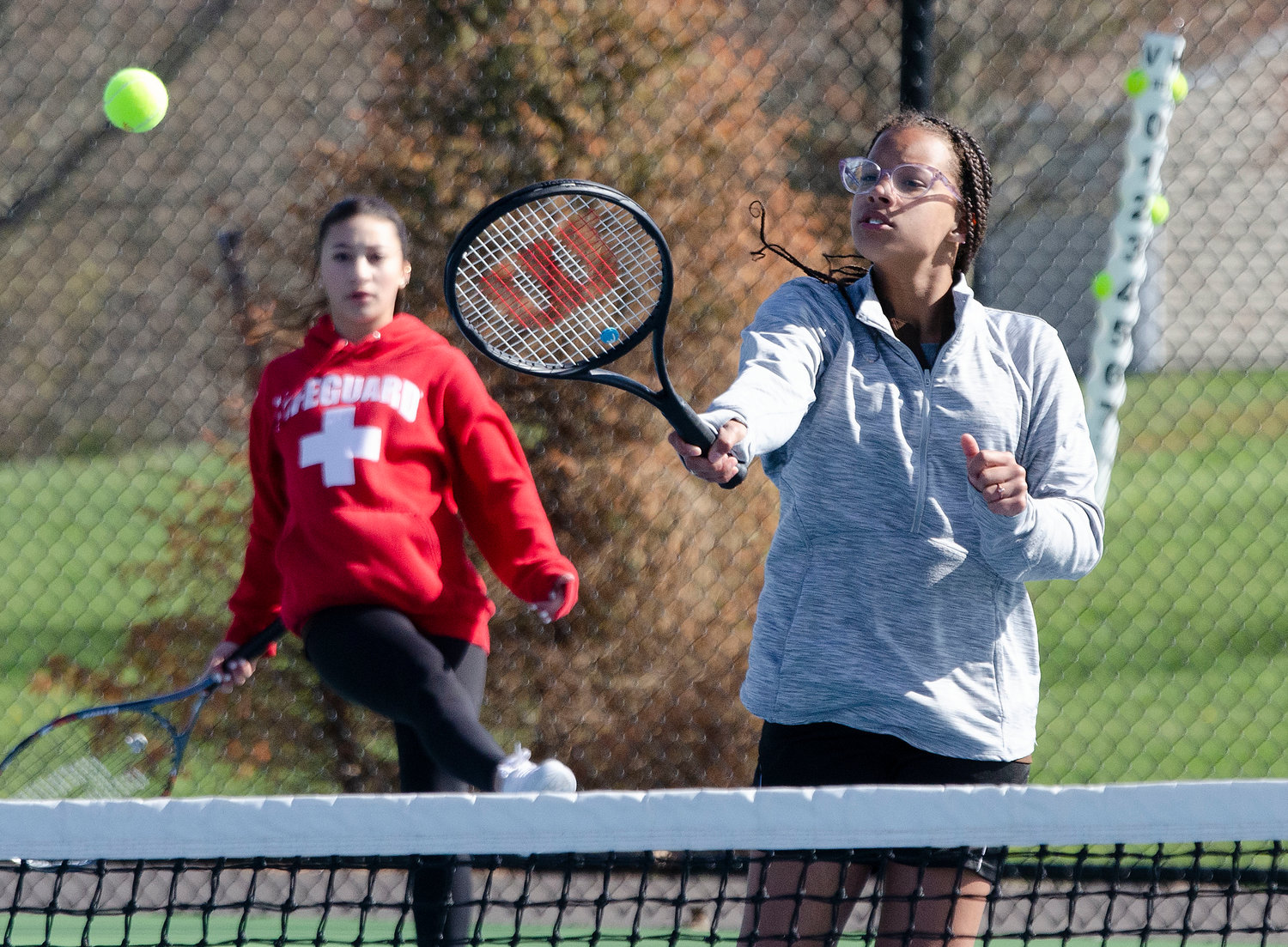 Avery Carvalho (left) looks on as teammate Taliyah Raiche hits a volley during their match. The pair filled in at second doubles and lost to Cougars’ Alessandra Arruda and Bianca Rego in a second set tie breaker 4-6, 6-7 (2-7). 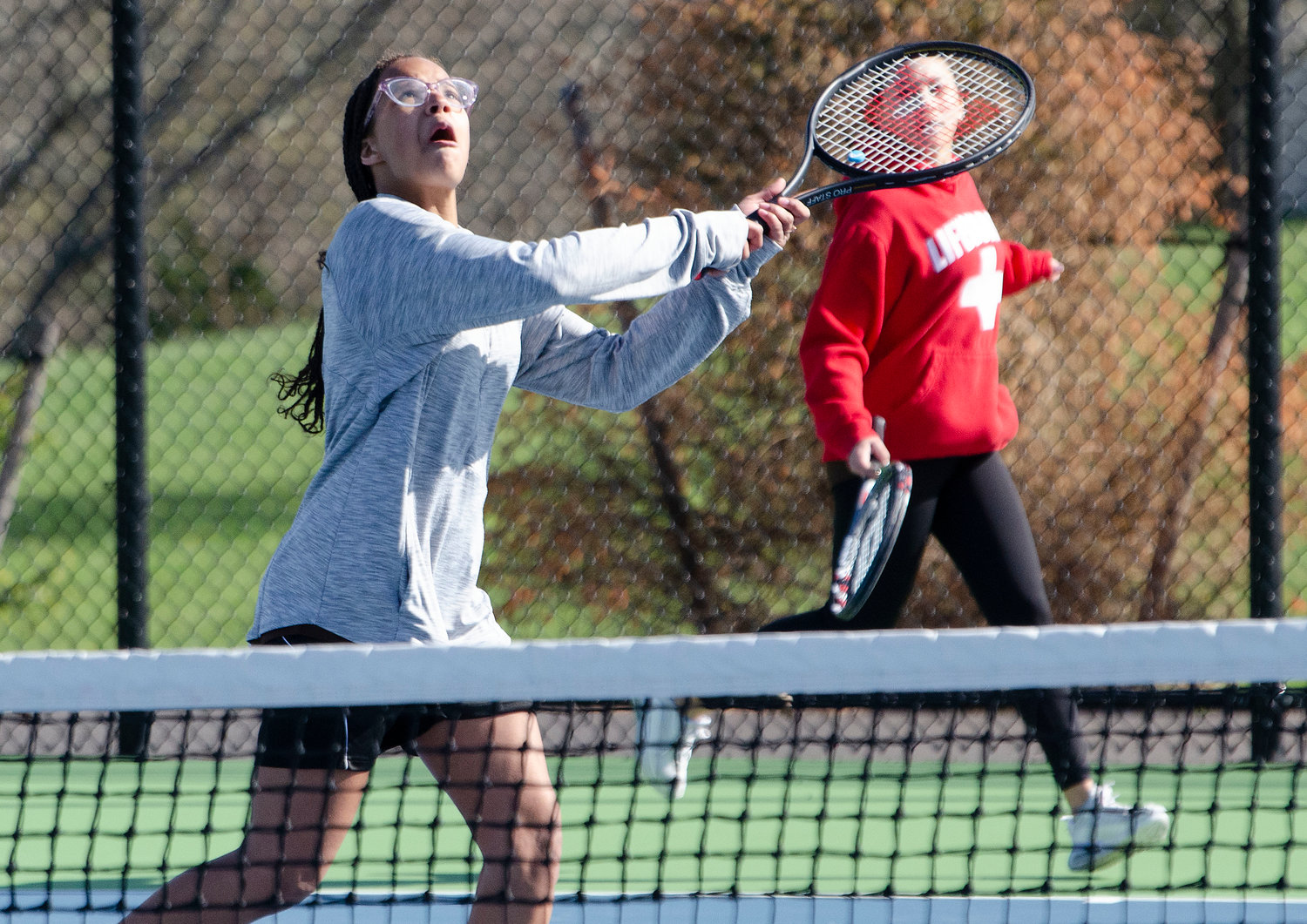 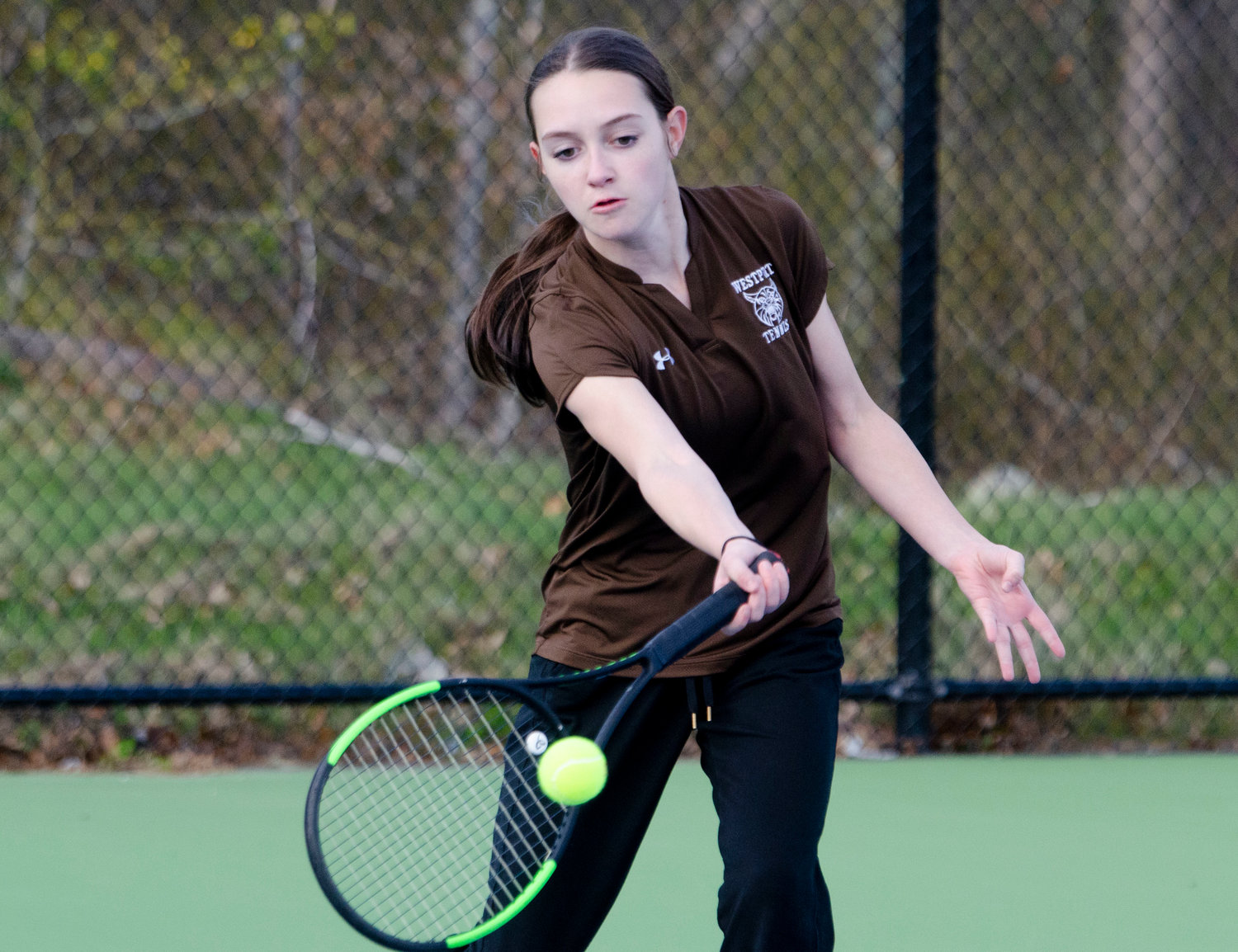 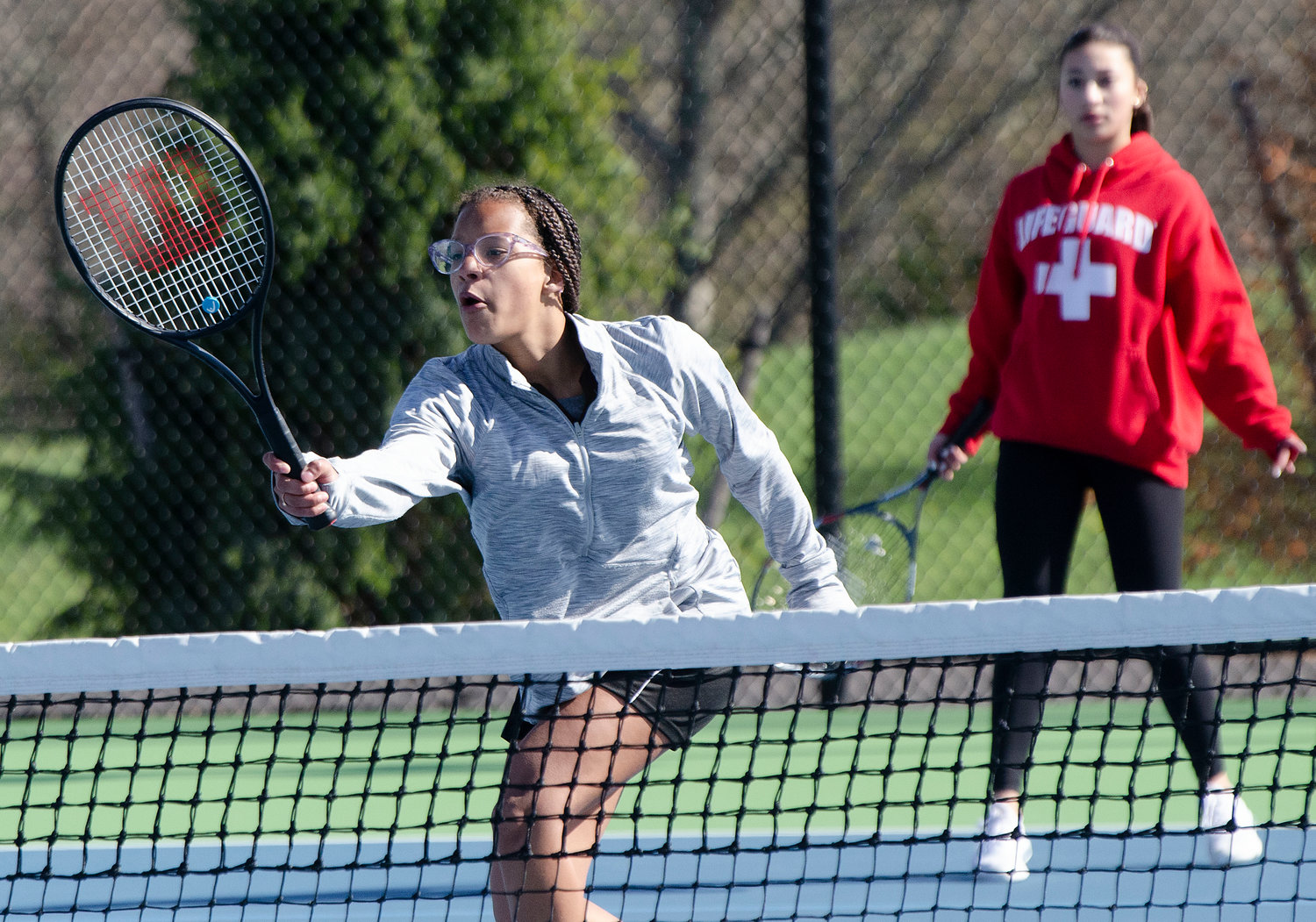 The Wildcats singles players swept their matches as the Westport girls tennis team beat up Bishop Connolly 4-1 during a home match on Wednesday. The win improves the team’s overall record to 3-2 and 2-0 in Mayflower Athletic Conference play, with the team’s only loses coming at the hands of power house Fairhaven.

The Wildcats lost three starters from last season’s team that went undefeated during the season, earned a first round bye in the tournament, but lost to Ursuline Academy in the second round.

The Wildcats boast a strong singles lineup led by first singles player Kaelyn Jones. The sophomore started playing varsity as an eighth grader. All of the singles players are 3-2 this season.

“She started playing doubles,” said Westport head coach Matt Kampper of his first singles player. “Kaelyn moved up to first singles last year and she has been very successful. We are going to really lean on her this season.”

Eighth grader Gloria Moniz plays second singles for the Wildcats. “Gloria is a powerful player. She needs to get a little more consistent. She had a good match against Bishop Connolly and she’s had a good season thus far.” Last season, Moniz played doubles with Wildcats’ senior captain Sam Parker the third singles player. Both stepped up this season to play singles and it has worked out well for the Wildcats. Parker had been a doubles player since seventh grade and took on the challenge of filling the third singles slot.

“It says a lot about her as a leader,” said Coach Kampper. “Sam has seen it all and done it all. We really rely on her for her leadership. She’s been on state tournament teams and has known a lot of success. It’s good to have her at the top running the show.”

“It was definitely a big difference,” Parker said of playing singles. “I was out of breath my first few matches. But I like having control of the court myself and I like that when I mess up, that it’s on me.”

Westport  has an abundance of underclassmen that are ready to step in at doubles.  Senior co captain Kyra Ferreira and junior Mikhaela Rego are the Wildcats’ first doubles team, though they were away this week and underclassmen Avery Carvalho and eighth grader Taliyah Raiche played in their stead against the Cougars. The two have shown a lot of promise and Coach Kampper is hoping to work the pair in at second doubles with sophomore Madison Plourde and freshman Ava Couto.

Westport has won three league titles and has made it to the tournament four times over Coach Kampper’s seven years at Westport.

“We’ve lost to bigger schools that have powerhouse programs,” he said about the team’s tournament loses. “I’ve been fortunate to have some really good players.”

Westport plays at Diman on Monday and West Bridgewater on Wednesday before returning home on Friday to host Durfee High School. All matches start at 3:30 p.m.