Everything is getting more expensive, and that includes food. According to the latest report from the U.S. Bureau of Labor Statistics, the annual rate of inflation in the United States was 6.2 … 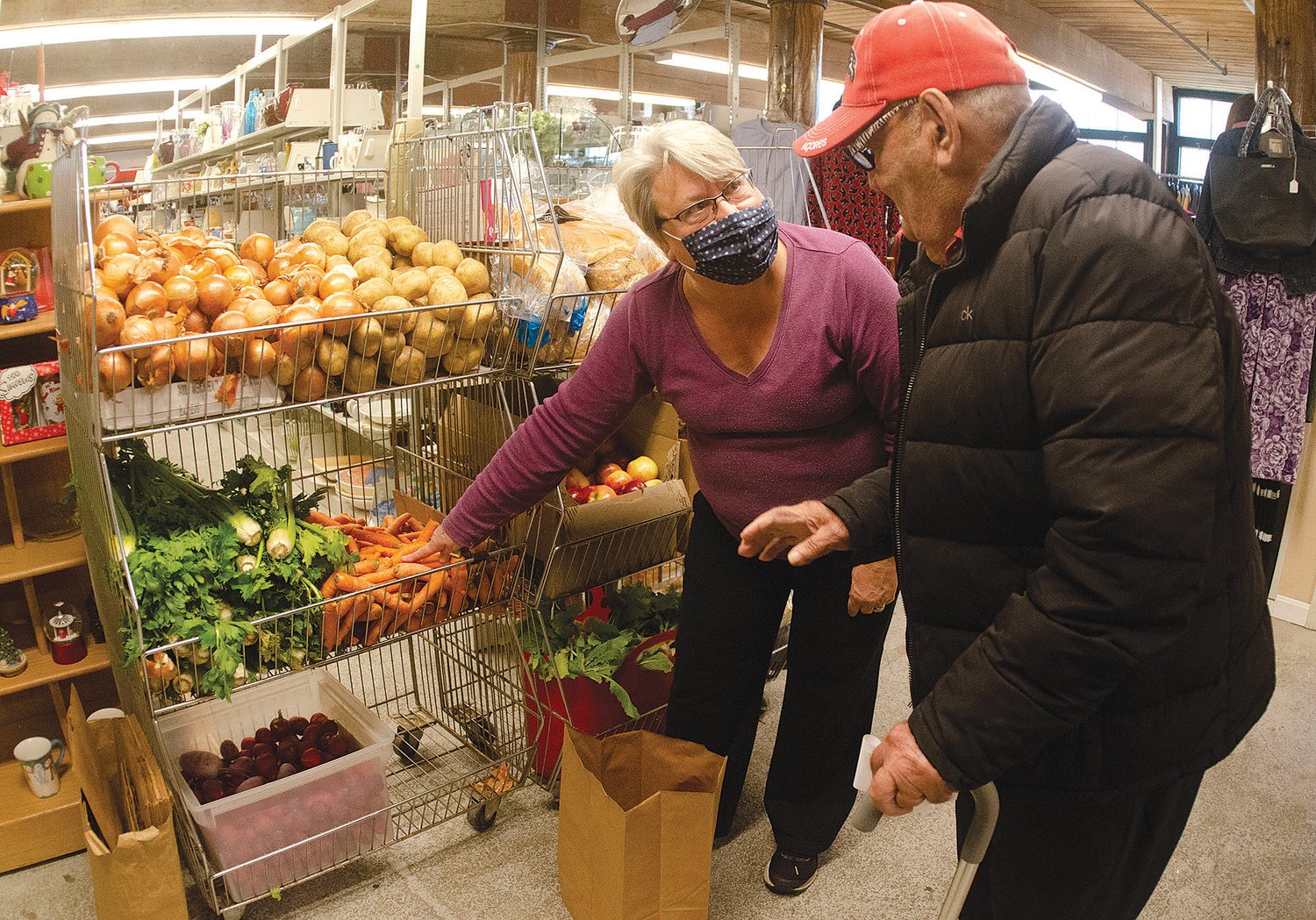 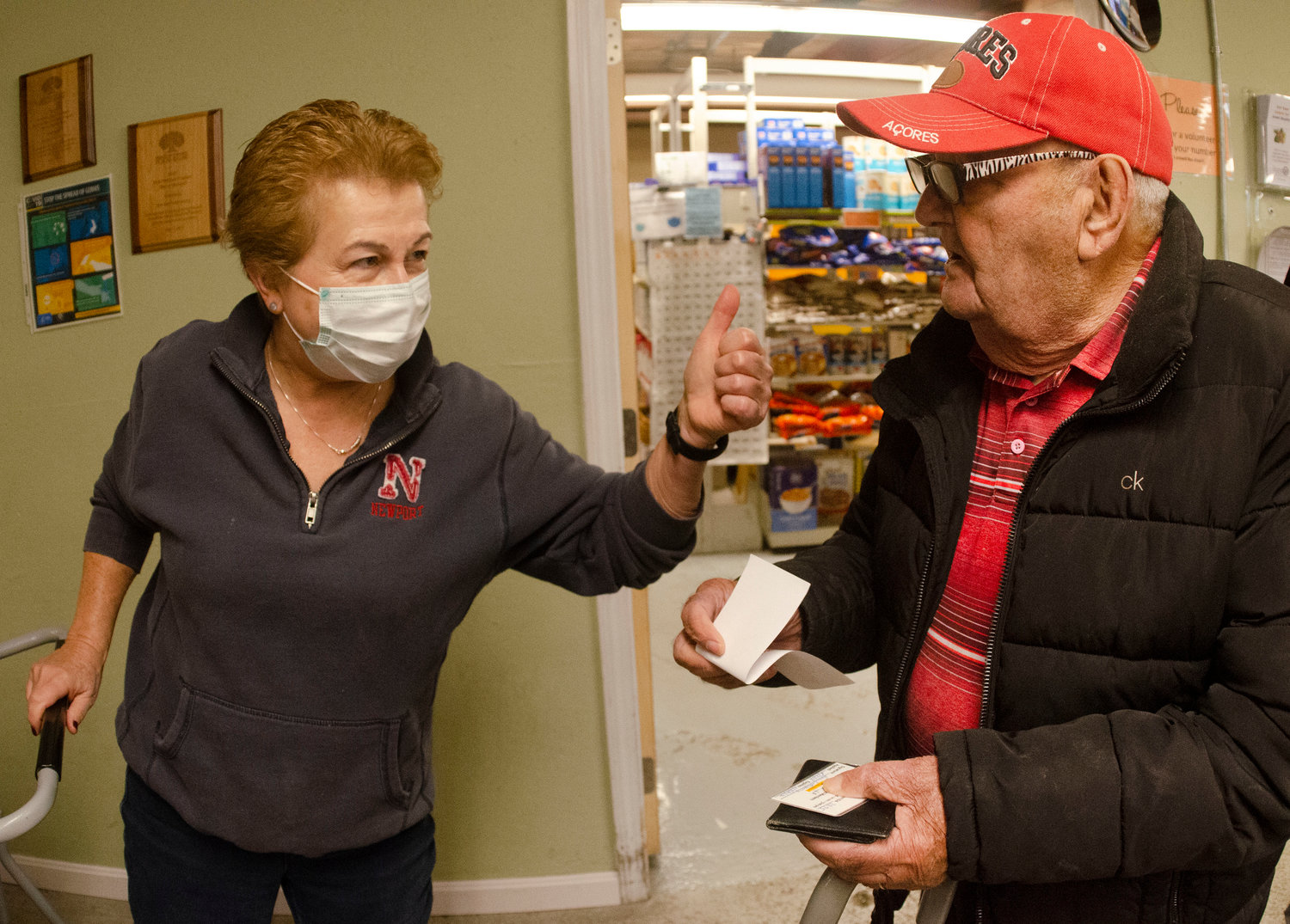 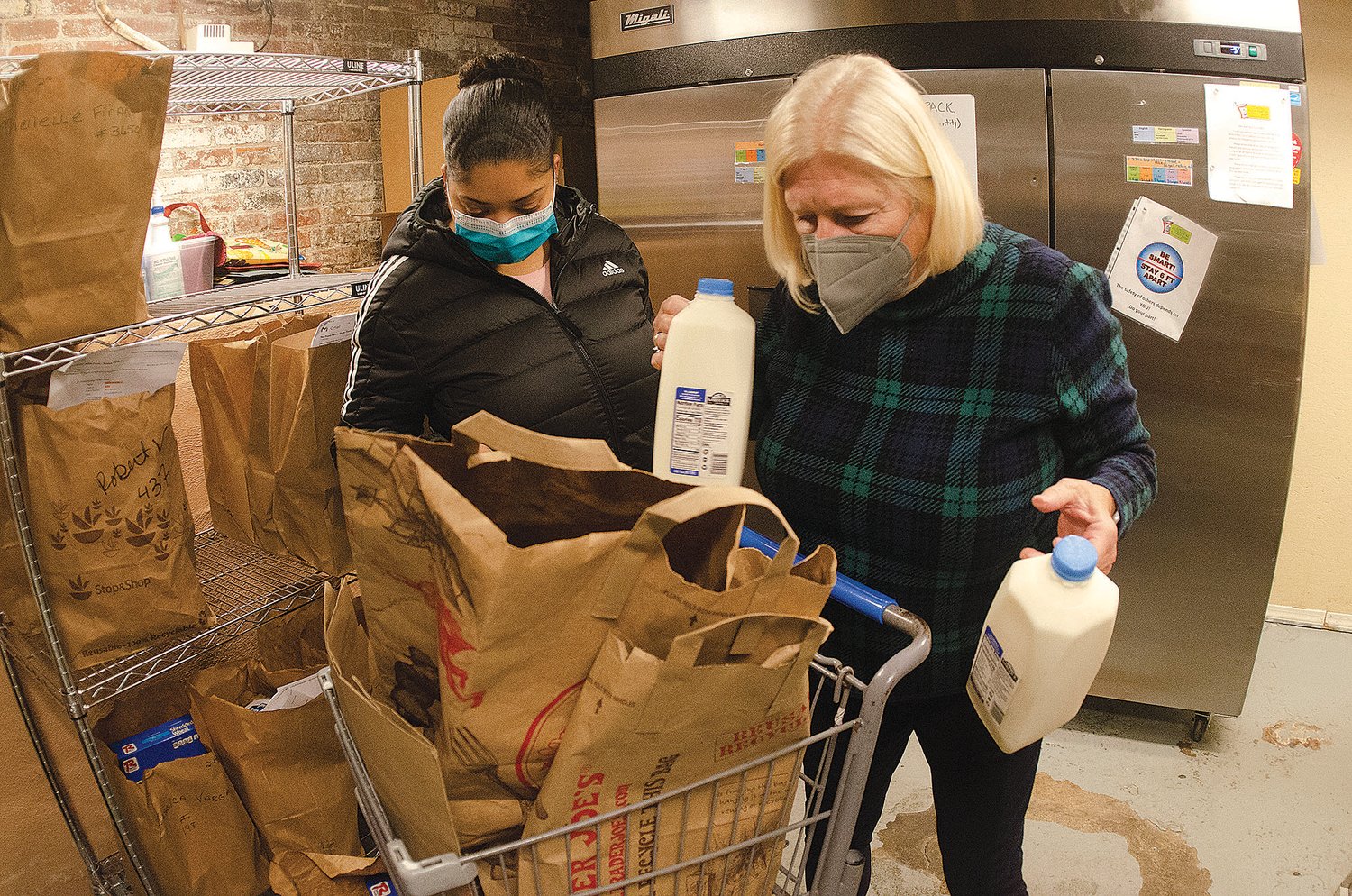 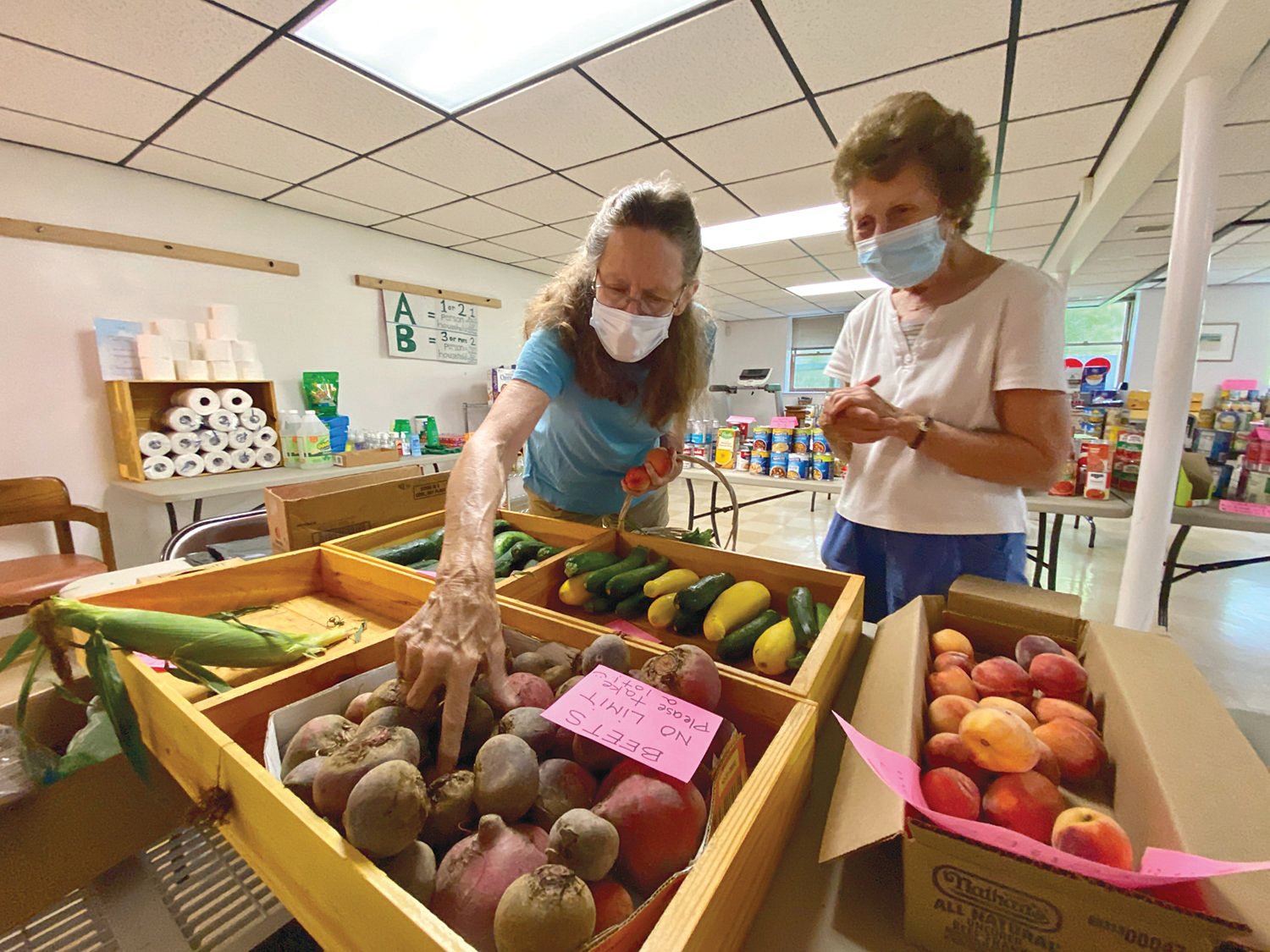 Volunteers Holly Billings (left) and Helen Pereira inspect some of the fresh local produce available back in August at the Little Compton Food Bank. 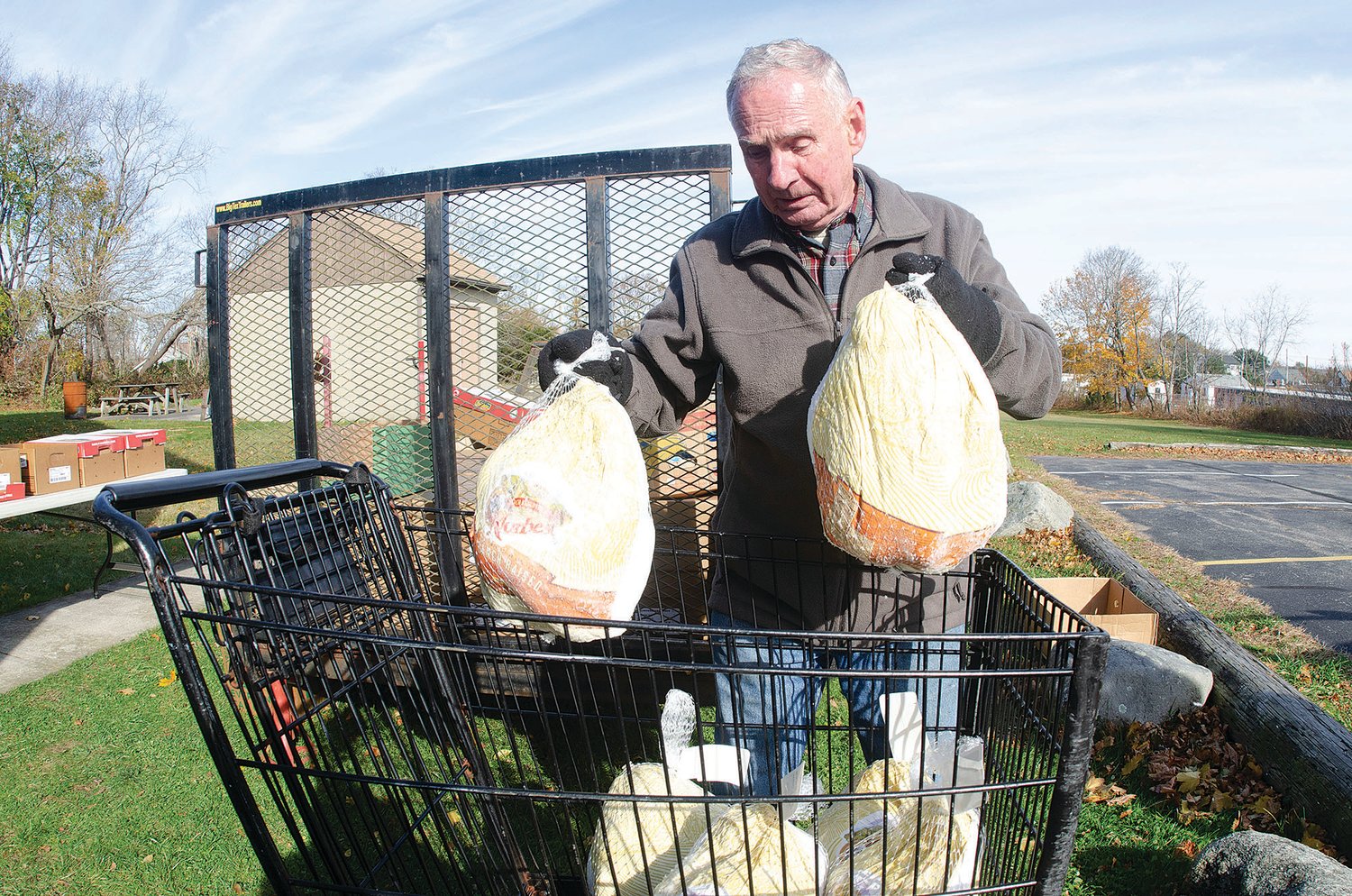 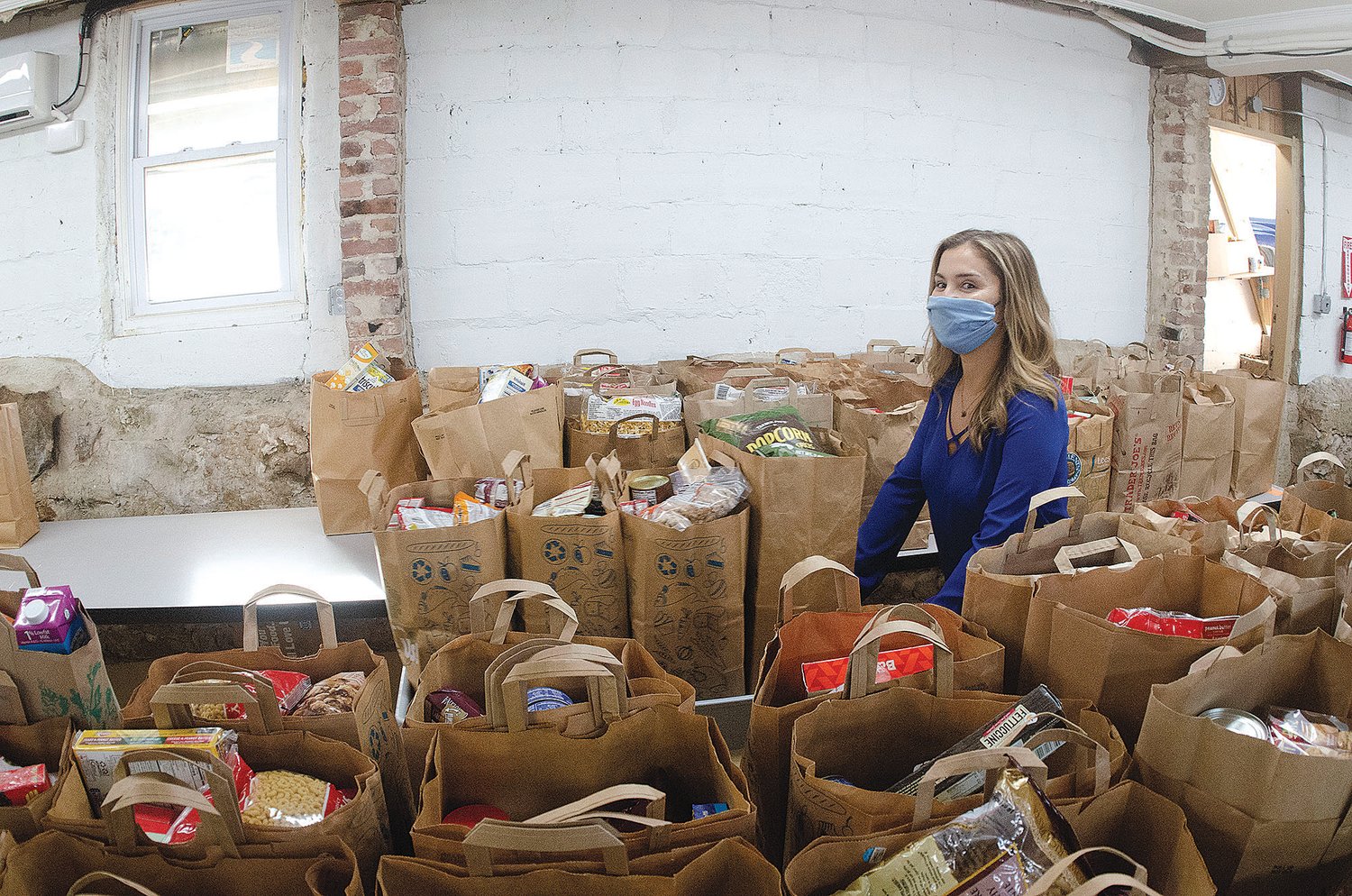 Volunteer Kim Lima works in the Westport Food Pantry, which has grown from not existing a year and a half ago, to serving an average of 120 clients each week.
Previous Next
Posted Thursday, December 2, 2021 7:00 am

We’ve been seeing a lot of people who we haven’t seen in a while.”
Karen Griffith, East Bay Food Pantry

There has been a dramatic increase in the number of people using our food bank.”
Sue Chase, Little Compton Food Bank
By Scott Pickering

Everything is getting more expensive, and that includes food. According to the latest report from the U.S. Bureau of Labor Statistics, the annual rate of inflation in the United States was 6.2 percent in October — the highest it has been since 1990. This means the average cost of goods, as measured by the Consumer Price Index, rose at a higher rate in the last 12 months than at any time in more than three decades.

The hardest-hit sectors are easy to see — with gasoline, home heating fuels and food near the top of the list, along with new or used cars and trucks.

This is always a busy time of year for agencies that provide food to those in need. As temperatures fall, many families shift tight family budgets to heating their house, putting stress on their food supplies. With prices rising for both heat and food, the economic trends do not bode well for any American family, least of all those living in poverty or beyond their means. Visits to the local food pantries are likely to increase.

Jill Woodcome, executive director of the Good Neighbors soup kitchen and food pantry in Riverside, worries there are major storm clouds on the horizon.

“Right now we have a perfect storm brewing. We’re seeing Covid case counts rise with the pandemic. We’re seeing higher food prices across the board. We’ve got supply chain problems. I worry about that razor’s edge that so many families sit on, between barely making ends meet and falling over the cliff,” Woodcome said.

Good Neighbors is not the busiest it’s ever been, when it served 475 families in one month. But it is busier than it has been in years. In November, despite being closed on one of its normal food distribution days, Good Neighbors still served more than 300 families. “The need is higher than we were seeing pre-pandemic, which was in the two-hundreds every month.”

Illustrating Woodcome’s worry about the “perfect storm,” they are seeing new families every week. “We’re seeing a lot of families coming to us for the first time, where they just can’t make ends meet. If anything, that is going to be getting worse over the winter.”

The need is rising

Those themes are common throughout the food pantries of the East Bay. Most have adequate food supplies, for now. They have a stable group of volunteers. But they are seeing an increase in clients. Need is rising.

“We’re seeing an uptick right now,” said Karen Griffith of the East Bay Food Pantry in Bristol, which had 828 household visits for food in the month of October.

Those visits ran the gamut of the different programs offered through the East Bay pantry, including their “Fresh Food Friday,” a special program for children, a home delivery service, and a mobile cart at a senior living center.

Griffith believes the termination of some federal assistance programs linked to the pandemic, such as an unemployment bonus for those on assistance, have been affecting people.

“We’ve been seeing a lot of people who we haven’t seen in a while,” Griffith said. “They were getting all these extra benefits, and now they’re not, and they’re coming back to us.”

Twice as many households

Many people do not know that Little Compton, home to magnificent ocean vistas and soaring real estate prices, has a food bank. It does, and it is busier than ever.

The food bank has a good supply of food and steady volunteers, but one thing it lacks is good publicity. An August story in the Sakonnet Times provided a boost in visibility, said volunteer coordinator Sue Chase, but they know they could use even more publicity.

“It is a well-kept secret, but we’d like to get the word out, so that anyone who needs our help, knows that we are here,” Chase said.

Regardless of how quiet they’ve been, more people are finding them. Though they serve clients from only Tiverton and Little Compton, they have doubled their activities in just a few months. “There has been a dramatic increase in the number of people using our food bank. We used to serve about 20 people per month,” Chase said. “Last month was kind of a surprise; we served 35 households, and next month will be more than 40 households.”

Many of their clients are single elderly, widows or widowers living alone and struggling either financially or physically, or both.

“One of the great things about being in Little Compton is we have such a supportive community,” Chase said. “We’ve got great volunteers, and we have been bringing in some younger ones… But we know we can feed more people, and there are more who could use our help.”

Another under-the-radar program is the St. Mary of the Bay Food Pantry in downtown Warren. Director Wendy Baker said they’ve been active since the late-1990s. Like others in the region, they are seeing the need increase.

“In November, it’s gone up even more, and that will continue in December and January,” Baker said.

The Warren pantry is open Tuesdays from 3 to 5 p.m. and Wednesdays from 9 to 11 a.m., downstairs in the church hall. Baker said clients come from the surrounding area, but from other communities as well, from Tiverton, East Providence and beyond.

They would like to start a home delivery program, but they lack the volunteers.

All the region’s food pantries are benefiting from a pandemic stimulus program. Their major food supplier is the Rhode Island Community Food Bank, which is using grant funding to provide food for free to local pantries.

Many of them also have partnerships with area grocery stores, like Shaw’s and Stop and Shop, to receive major donations of “rescue” produce and meats. They also benefit from food drives and individual donors bringing both food and cash. Overall, many said their regular donors have been generous.

However, they do worry about the coming winter. Based on what they are seeing right now, and on the horizon, they predict a busy season for food.

“The need is still there,” said Karen Griffith of East Bay. “As much as we would like it to be over, it’s not. Even when Covid is over, there are still going to be people who need help.”