Christmas won't be here for another 16 days, but it came early this year for Lou Perry, his wife Marta and son Travis. 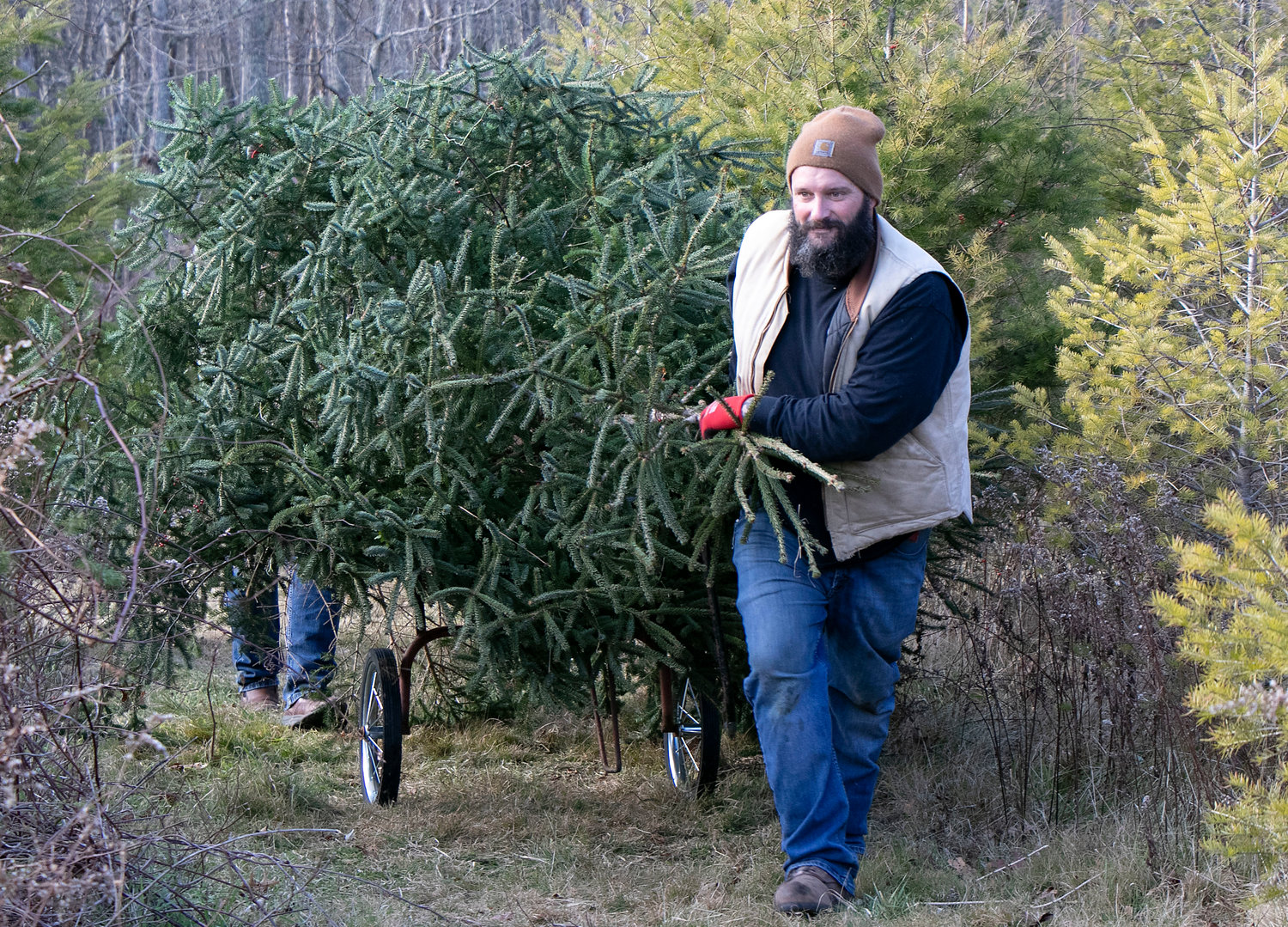 Lou Perry hauls out a Christmas tree from his family's Hidden Spruce Farm this past Sunday. Perry worked the farm as a teenager, and purchased it with his family this past June.
RICHARD W. DIONNE JR. 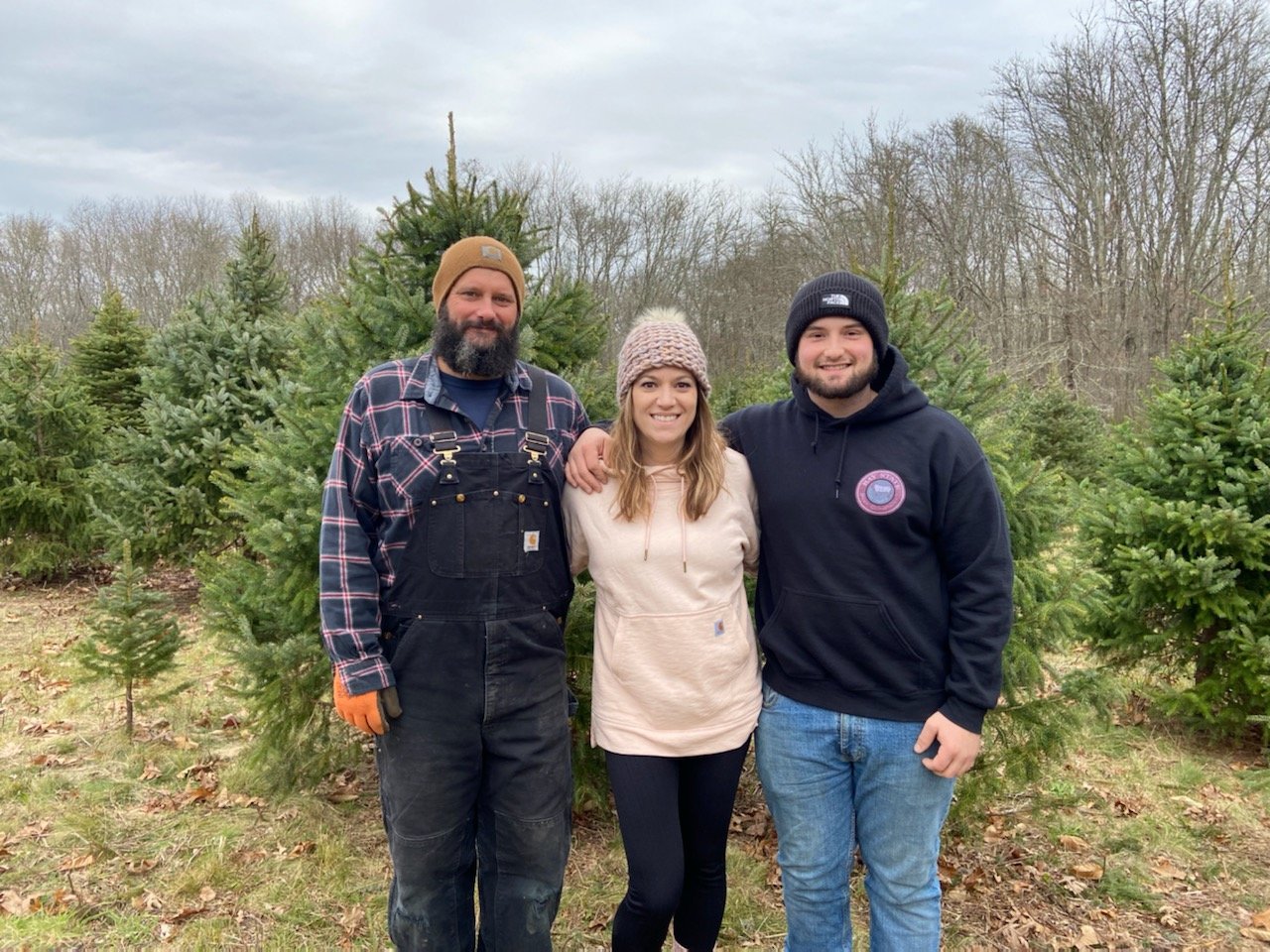 Their first season as tree farmers exceeded all expectations. The Perrys (from left) Lou, Marta and Travis, sold enough in the farm's first five days open to close for the season.
PERRY FAMILY 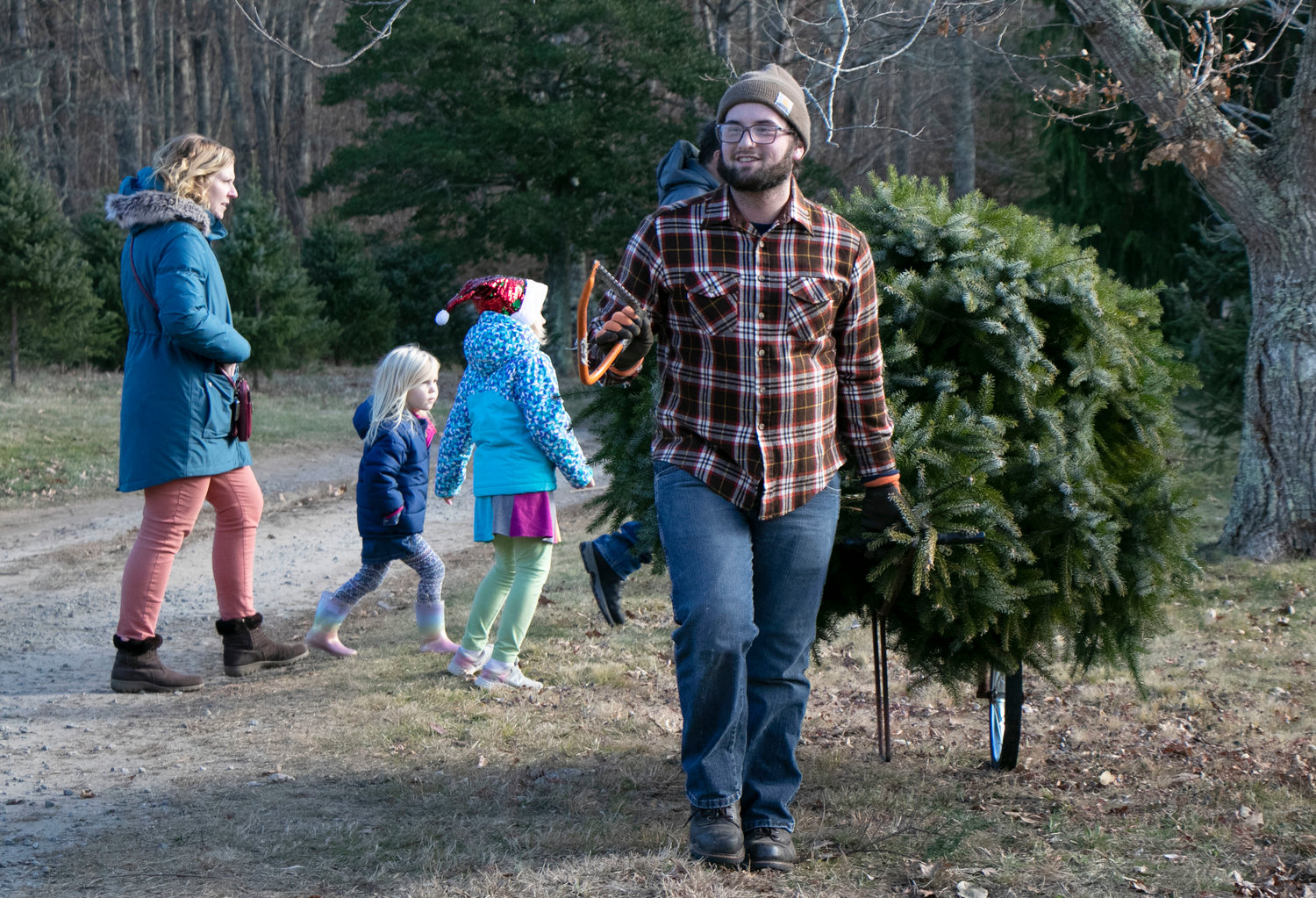 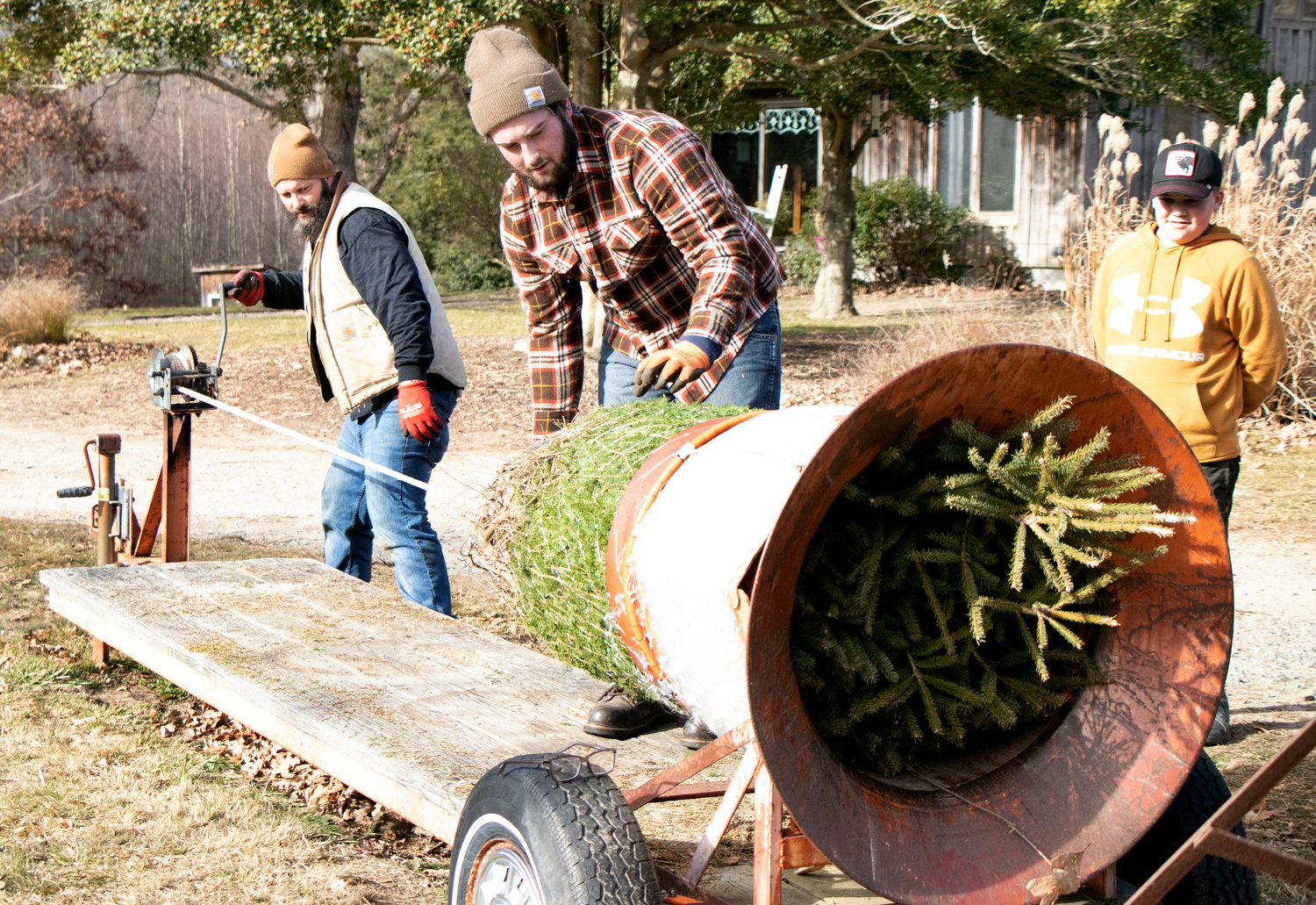 Travis (foreground) guides a tree into the wrapper, while father Lou cranks it through.
RICHARD W. DIONNE JR. 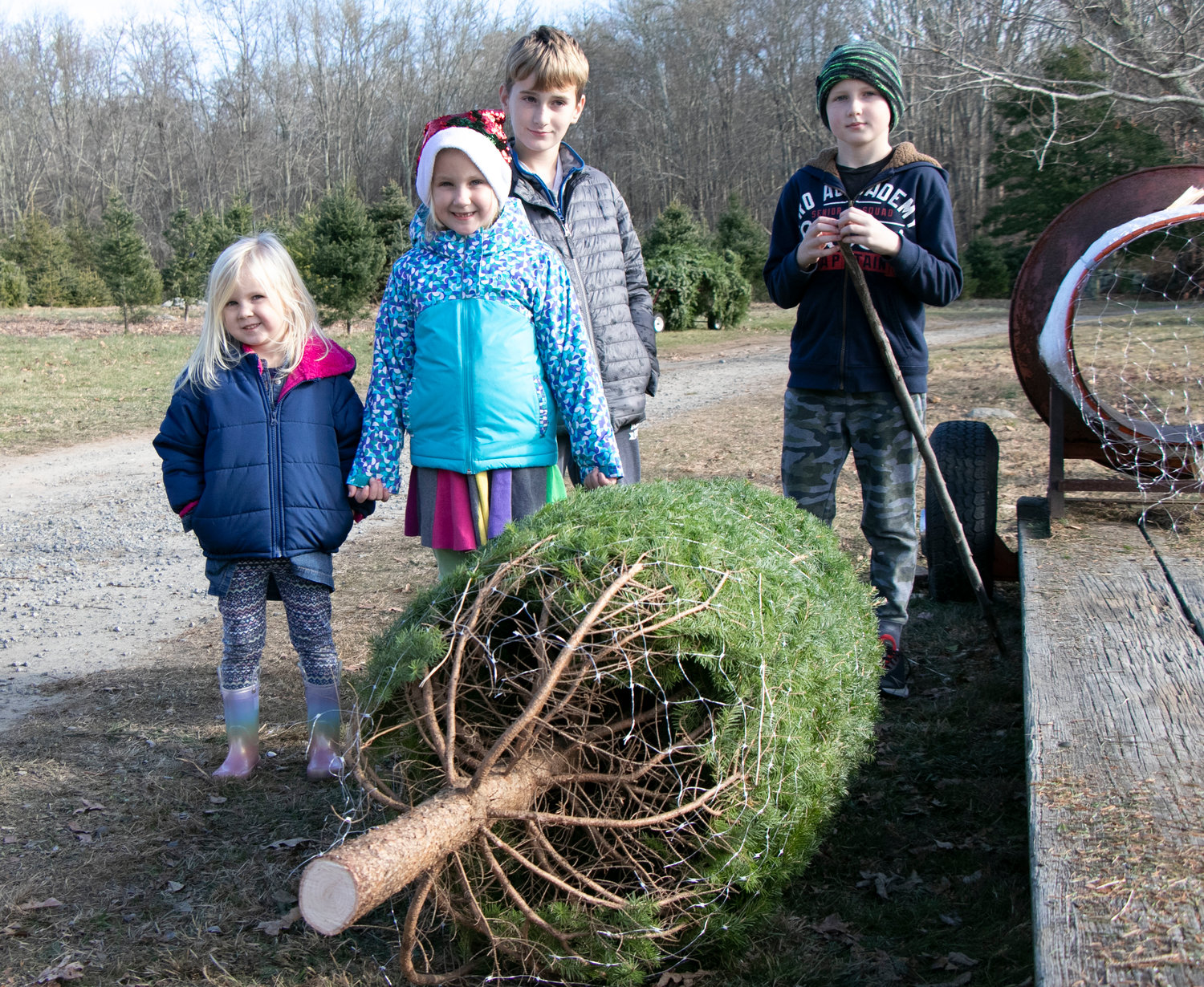 The property has always held a soft spot in my heart. I always felt that it was an extremely special and unique place.”
Lou Perry, of Hidden Spruce Farm
By Ted Hayes

Christmas won't be here for another 16 days, but it came early this year for Lou Perry, his wife Marta and son Travis.

On Sunday, the Perrys decided to close their new Hidden Spruce Christmas tree farm on Sodom Road for the season. After just five weekend days open, business had far exceeded their expectations and they closed to make sure they have enough at market size to sell next season.

For the Perrys, who purchased the former Bristlecone tree farm at 779 Sodom Road in June and have been working seven days a week since to get it ready, the first holiday season as tree farmers was almost unbelievable, Lou said. It ran just five weekend days, from the Friday after Thanksgiving until this past Sunday.

"We expected it to be a slow trickle; maybe a couple dozen trees, total for the year, is honestly what we thought," Lou said. "I guess there are a lot of loyal people."

Perry grew up in Westport, part of a farming family. His father still raises beef and pigs here, his grandfather was a dairy farmer, and his great-grandfather also farmed. Though he always wanted to follow in his predecessors' footsteps, Perry became a heavy equipment operator and prior to this year had never owned his own farm.

That changed in April, when he happened upon an online listing for the former Bristlecone farm. He was familiar with the place — as a teenager, he cut and bagged countless trees there, working for its original owner, Paul Farias, who'd started the farm at the south end of Sodom in the 1970s. Perry is still friendly with Farias and he and Marta reached out. By June, they had signed the paperwork, taking ownership of Bristlecone's 40 acres and renaming it Hidden Spruce. They moved to the farmhouse not long after, down a long dirt road off Sodom. It was a dream come true.

"The property has always held a soft spot in my heart. I always felt that it was an extremely special and unique place," he said. "It was complete shock (to find the listing). I never thought this property would go up for sale. Being handed down for generations, these things don't usually go to market. So I'm very thankful to the family for it even being possible for us to purchase it."

The dream needed a lot of help. Bristlecone saw its heyday in the 1980s and 1990s, but hadn't been fully farmed and tended in some years. As soon as they purchased the property, the Perrys got to work cleaning and clearing, working seven days a week while not at their other jobs. It seemed endless.

"The place was so overgrown that we were digging trees out of briars and brush," he said. "It's been seven days a week since the middle of June (but) worth every minute."

Along the way, they received regular and much-needed help and advice from Farias, who came down every few weeks to help them along and offer advice.

"He comes down a few times a month. He likes to chitchat, and he's ecstatic to see the farm restored."

Though the Perrys envisioned this year as a "soft" opening and didn't advertise that they were open, word got out and by opening day on Friday, Nov. 26, they were slammed.

Everyone pitched in to help. Marta, who manages St. Anne's Credit Union in Westport, ran the money side of the operation and son Travis, who owns the Bay State Beef Company in Westport, helped cut and wrap trees for customers. By the end of that first weekend, they realized their original plan, to stay open through the holiday season and ease in to the operation, was out the window.

"Customers weren't the problem," Lou said. "It's the trees. We wanted to make sure" that they left enough mature trees for next season, though there are a few thousand on the property.

So happy and tired, they closed for the year on Sunday, thankful for the best season the farm has seen in many years.

"Sometimes it's still hard to believe it's ours," Lou said. "It was just meant to be."