Thousands of tons of rubble would be removed from under bridge, hopefully restoring shellfish habitat

Interested parties have until Thursday, Feb. 10 to comment on a United States Army Corps of Engineers plan to remove tons of rubble from the Westport River's East Branch at Hix Bridge, freeing a …

Thousands of tons of rubble would be removed from under bridge, hopefully restoring shellfish habitat 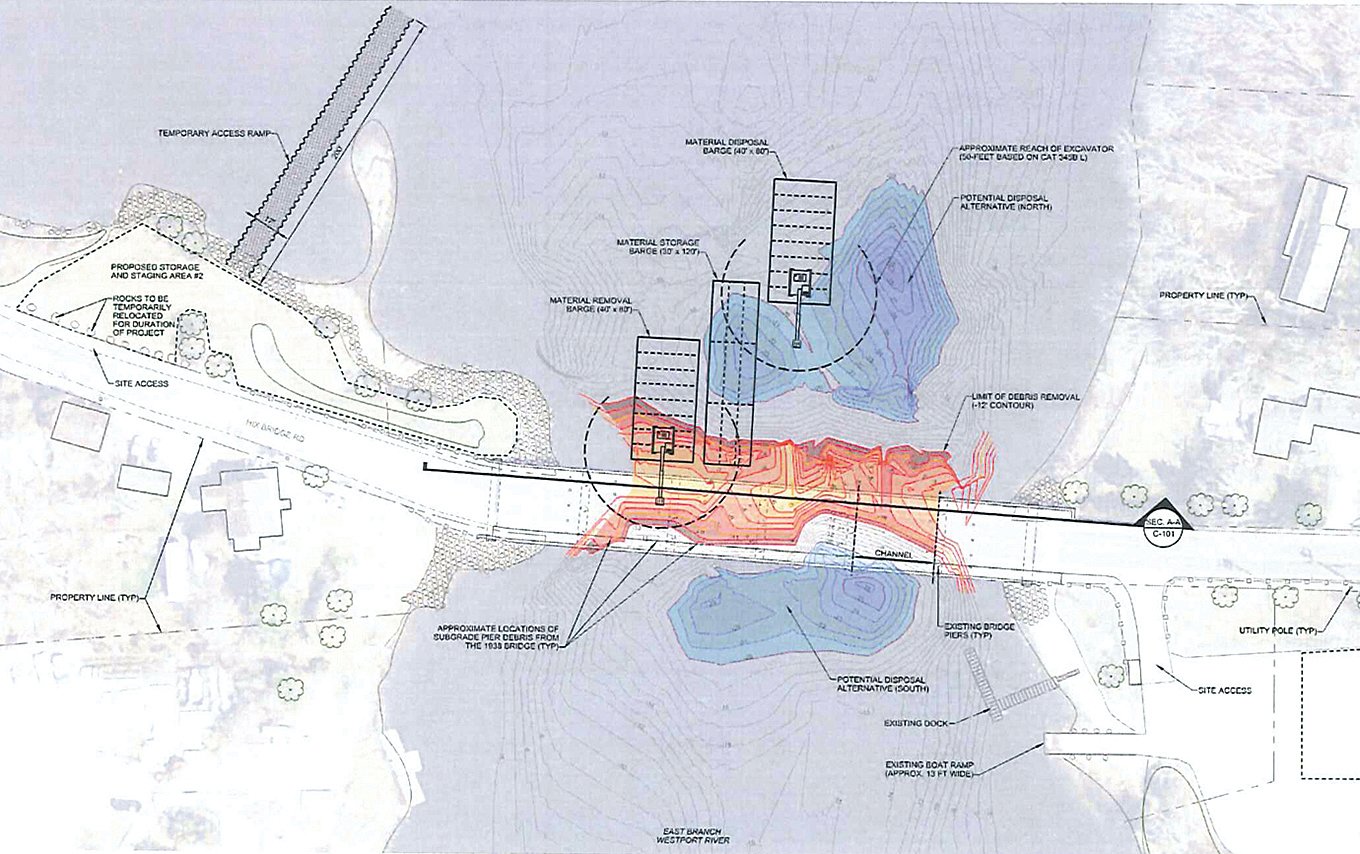 This Army Corps of Engineers drawing shows the location of bridge debris in red, and two possible dumping sites in blue.
USACE 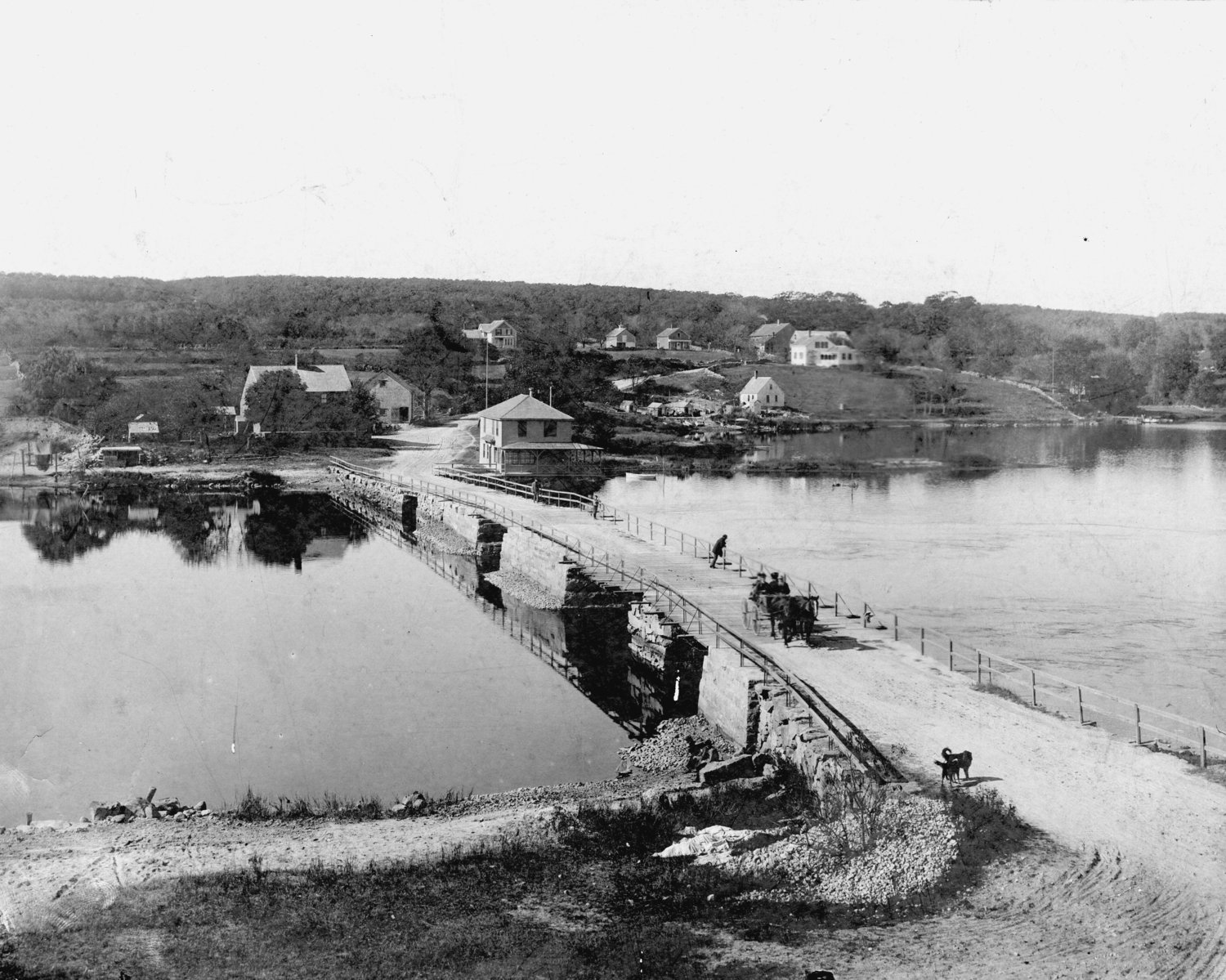 A horse-drawn buggy sets out across an earlier version of Hix Bridge more than a century ago. When the bridge was rebuilt after later hurricanes and on other occasions, rubble from the pilings was dumped alongside.
WESTPORT HISTORICAL SOCIETY
Previous Next
Posted Friday, January 14, 2022 4:08 pm
By Ted Hayes

Interested parties have until Thursday, Feb. 10 to comment on a United States Army Corps of Engineers plan to remove tons of rubble from the Westport River's East Branch at Hix Bridge, freeing a tidal impaction that has had a negative impact on the health of shellfish beds upstream.

The project has been years in the making. The corps committed to the cleanup nearly a decade ago, after it was determined that thousands of cubic yards of concrete and granite debris under the bridge had been dumped there under the agency's watch, during various bridge reconstruction projects and after the 1938 Hurricane. Though the river is as much as 30 feet deep in the area, some of that debris comes within feet of the surface.

According to the 30-day public notice, "the proposed project will remove piles of stone debris in the East Branch of the Westport River ... to restore river connectivity for shellfish habitat. Ecosystem restoration benefits will be measured in terms of acres of shellfish habitat restored in the system."

The Corps' public notice answers a question that had been discussed as recently as this summer: Would the debris be dumped elsewhere in the river, or trucked offsite?

"The stone will be placed in deep scour holes located upstream and downstream of Hix Bridge," the notice reads. "About 3,000 cubic yards of stone debris material would be removed from the waterway in the bridge openings by barge-mounted excavating equipment and placed in the scour holes."

Staging of construction equipment and access would be from town-owned lands northwest and southeast of the bridge.

When it prepared to launch its feasibility study on the project in 2013, the Corps estimated the cost of the cleanup at around $1 million. The Corps would pitch in $612,000 of that cost, it agreed, and an amendment to a state transportation bill passed in 2014 set aside $387,500 for the state and town shares.

Though there had been some question this year as to whether the deadline to use the funds has lapsed, Jessica Katon, legislative director in Rep. Paul Schmid's office, confirmed to the Shorelines in late October that that that money is still available.

State law allows for 10 fiscal years to access that bond money, she said, meaning it will expire in 2014.

"It is finally confirmed the funding is valid," she said.

Those who want to contact the corps can submit written comments to the U.S. Army Corps of Engineers, New England District, 696 Virginia Road, Concord Ma. 01742-2751. Mark comments ATTN Mr. Mark Habel. They can also be e-mailed to the Corps at nae-pn-nav@usace.army.mil.