Couple donates tree they planted 25 years ago to New Bedford, where it will shine this season 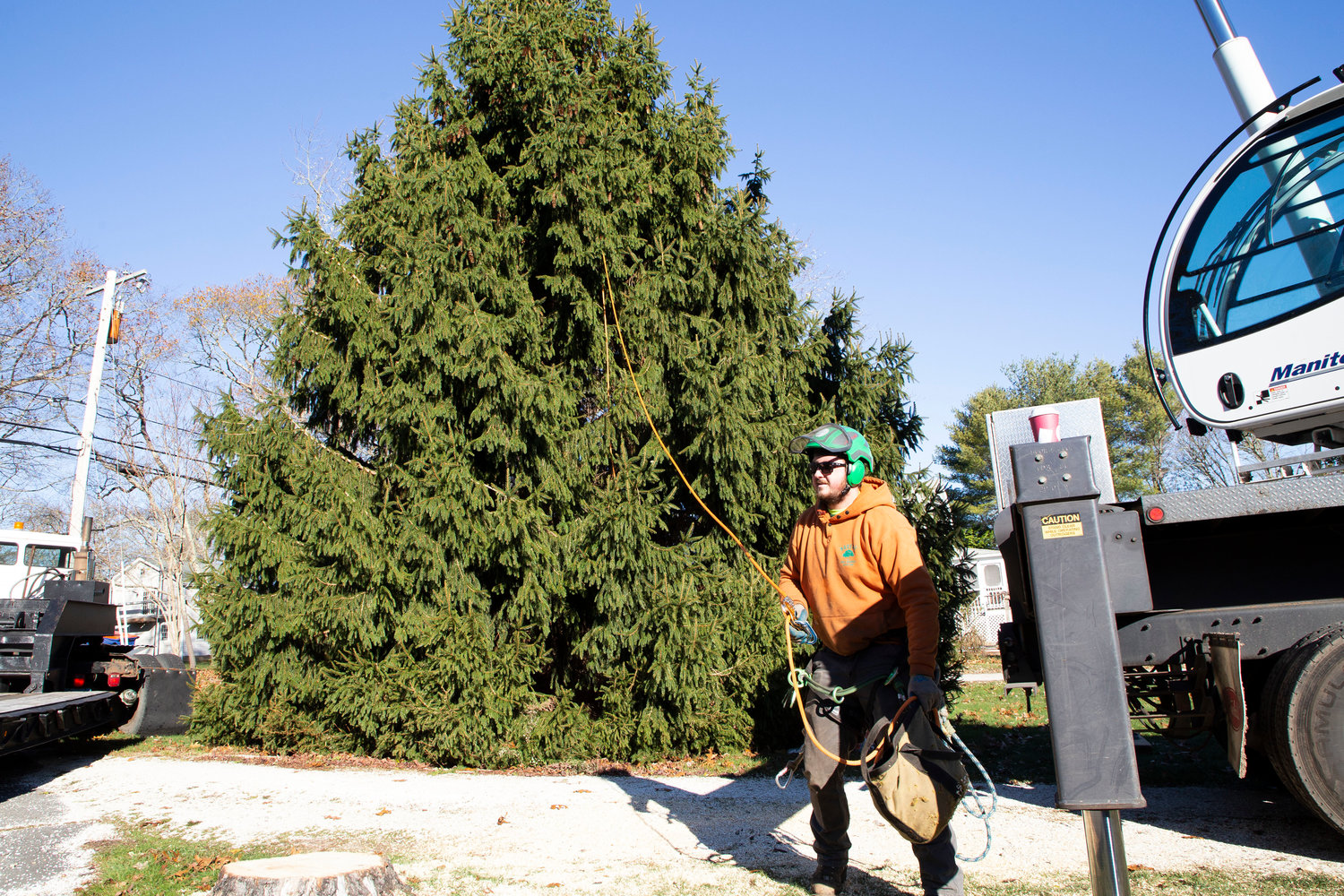 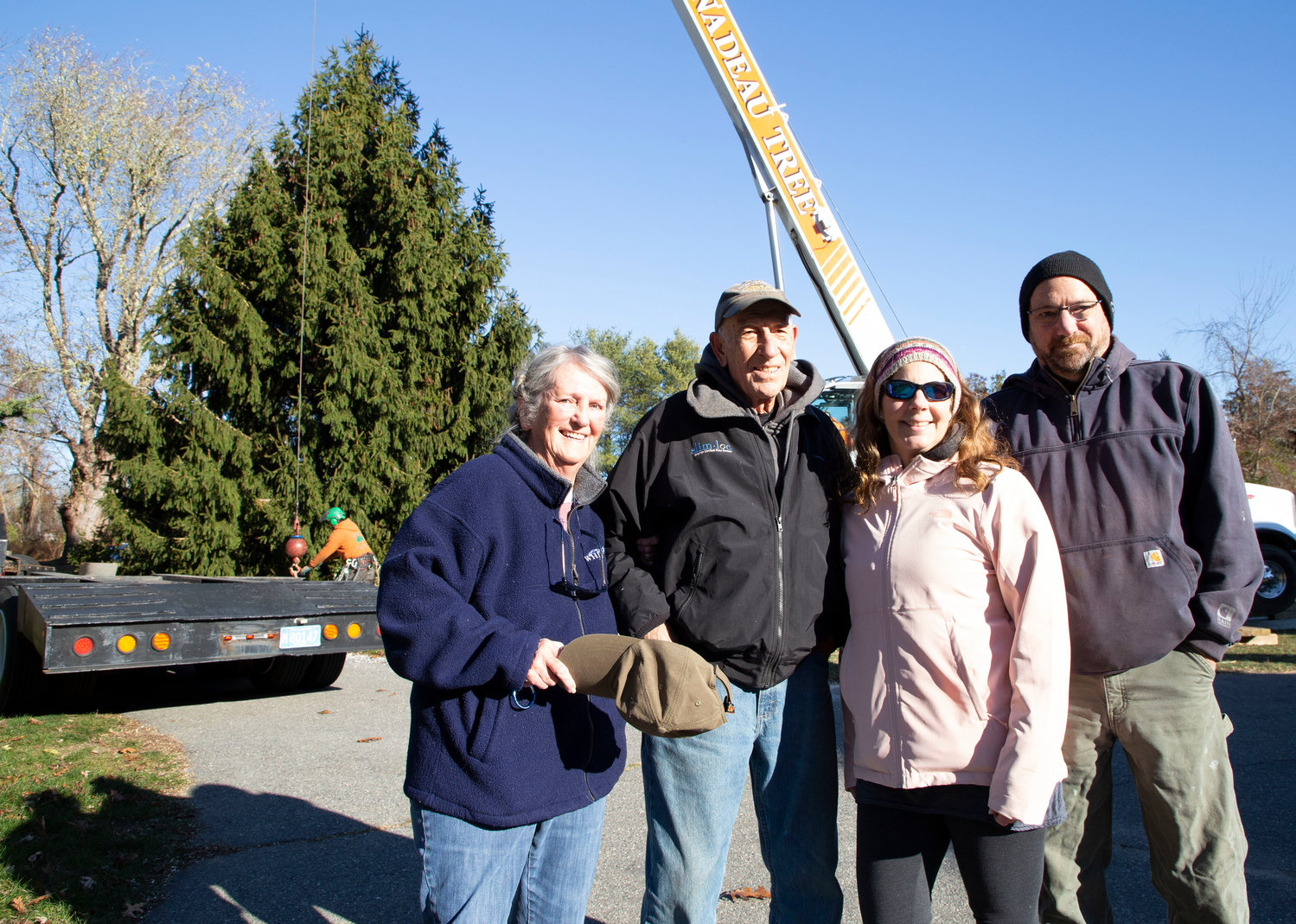 Pat Butler (left), husband Tom, and their son TJ Butler and his wife Julie Reitzas pose in front of the tree before it's cut down.
RICHARD W. DIONNE JR. 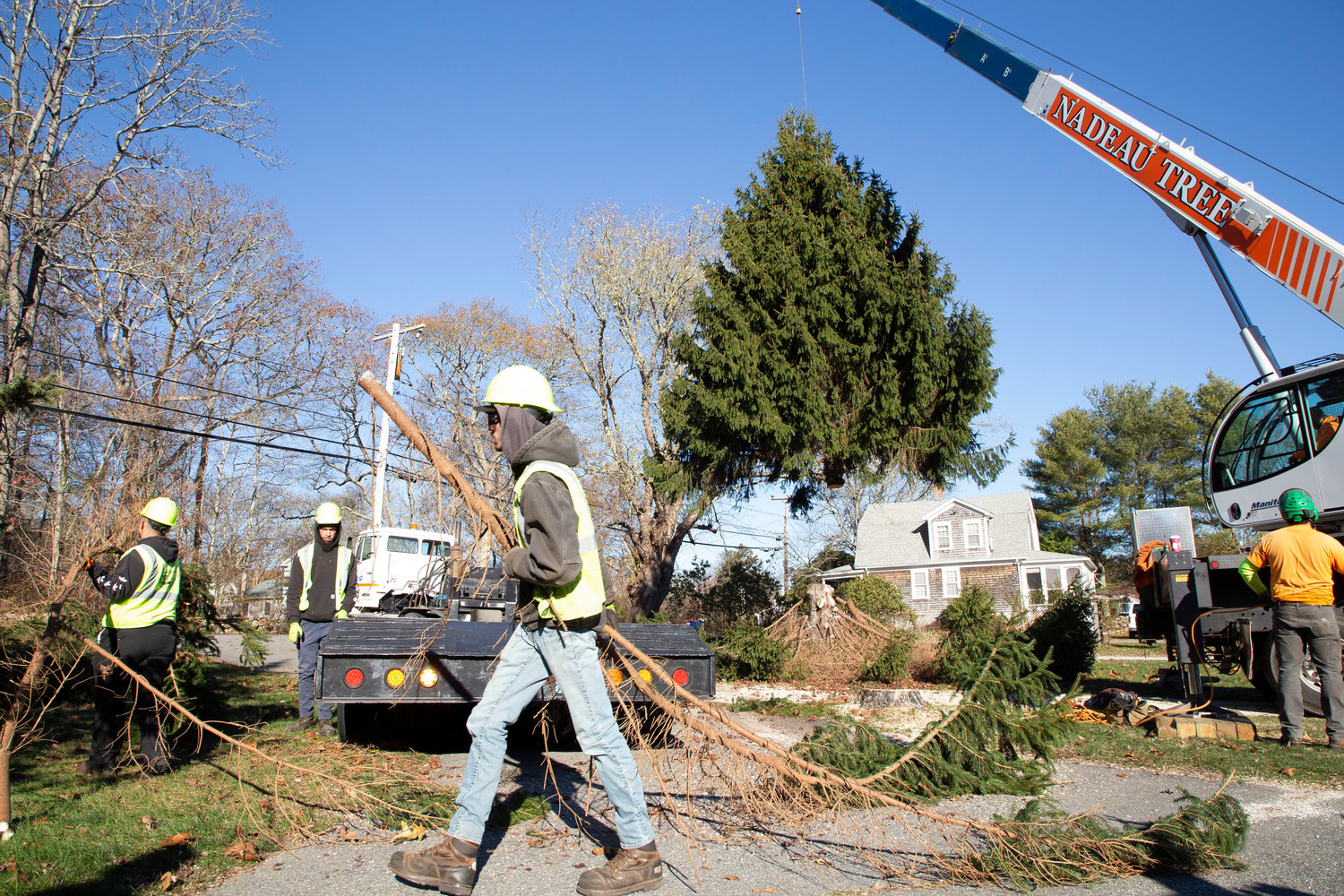 The massive tree free of the lawn, it hangs from a crane Monday morning.
RICHARD W. DIONNE JR.
Previous Next
Posted Wednesday, November 23, 2022 10:45 am
By Ted Hayes

Not too many Christmas trees reach the height of a five-story building, but after nurturing theirs for 25 holiday seasons, a Drift Road couple has donated their giant spruce to the City of New Bedford for its tree lighting and holiday festival next weekend.

Monday morning, arborists from Nadeau's Tree Service in Westport pulled up to Julie Reitzas and TJ Butler's house with a large crane, a truck full of chainsaws, hard hats and other gear, and cut down the large tree that had graced their front yard since 1997, when they were gifted it for their first Christmas in their first home.

After about an hour's worth of work, the crew hoisted the 50-foot tree onto a large flatbed truck and headed north for New Bedford. It was a little sad to see it go, Reitzas said, but she and TJ are thrilled that the tree that has meant so much to them for so long will be the centerpiece of this year's holiday season in New Bedford.

"It was a relief that it was so easy," she said. "I was just so pleased more than anything that they were really well-equipped to handle it. It's a beautiful tree but I could not imagine the girth of this tree leaving on a truck."

The tree has special meaning for the couple, who have owned it for as long as their marriage and the ownership of their first and only home together.

"We got married and we bought the house right after," Reitzas said. "We had our first Christmas (in 1997) and I said, 'Oh, I would love to have a tree that we could plant.'

Butler's parents bought the live tree at Sylvan's in Westport, and after the holiday the couple kept it alive, planting it in their front yard when the weather warmed the next spring. They picked a spot that wouldn't interfere with the house but would help block lines of sight to traffic glare  through their front windows, and that was that.

For years after, "it just sat outside and did its thing," Reitzas said.

The tree kept doing its thing year after year, averaging two feet of growth per year and getting so wide that it started to encroach on their driveway. Finally last year, the couple decided it had gotten too big and started looking around for places that would take it, reaching out to the organizers of holiday festivals in New Bedford, Newport, Taunton, Fall River and other communities. It seemed a good fit to give the tree one last Christmas.

New Bedford had already secured a tree last year, but organizers told them to follow up this year. They did, and though Newport also expressed interest this year, New Bedford beat the city to it.

"We could have cut it down and burned it ourselves, but that seemed a little sad," Reitzas said. "We're really glad it's going to be celebrated."

New Bedford will light the tree Saturday, Dec. 3, at about 5 p.m. The couple aren't crowd people, so they will likely not attend the illumination. But Reitzas said they'll drive by afterwards and have a look.