Lights, captivating performances, and fun for all ages is right on the horizon. 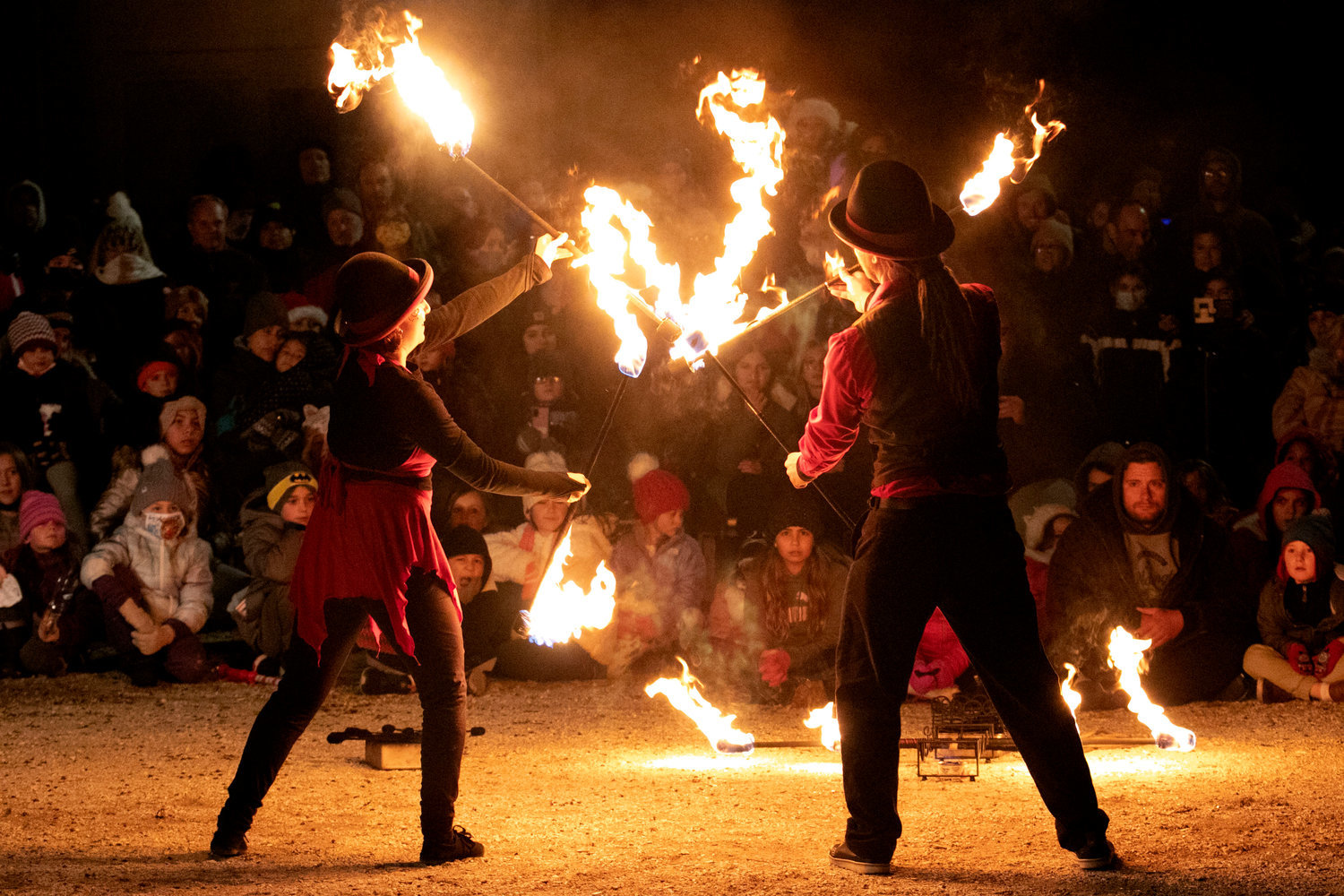 Fire spinners from last year’s Holiday Festival dazzle a crowd. Festival-goers can expect more of their impressive displays on Friday during two shows occurring at 5:15 and 6:15 at 39 Baker St.
Richard W. Dionne Jr. 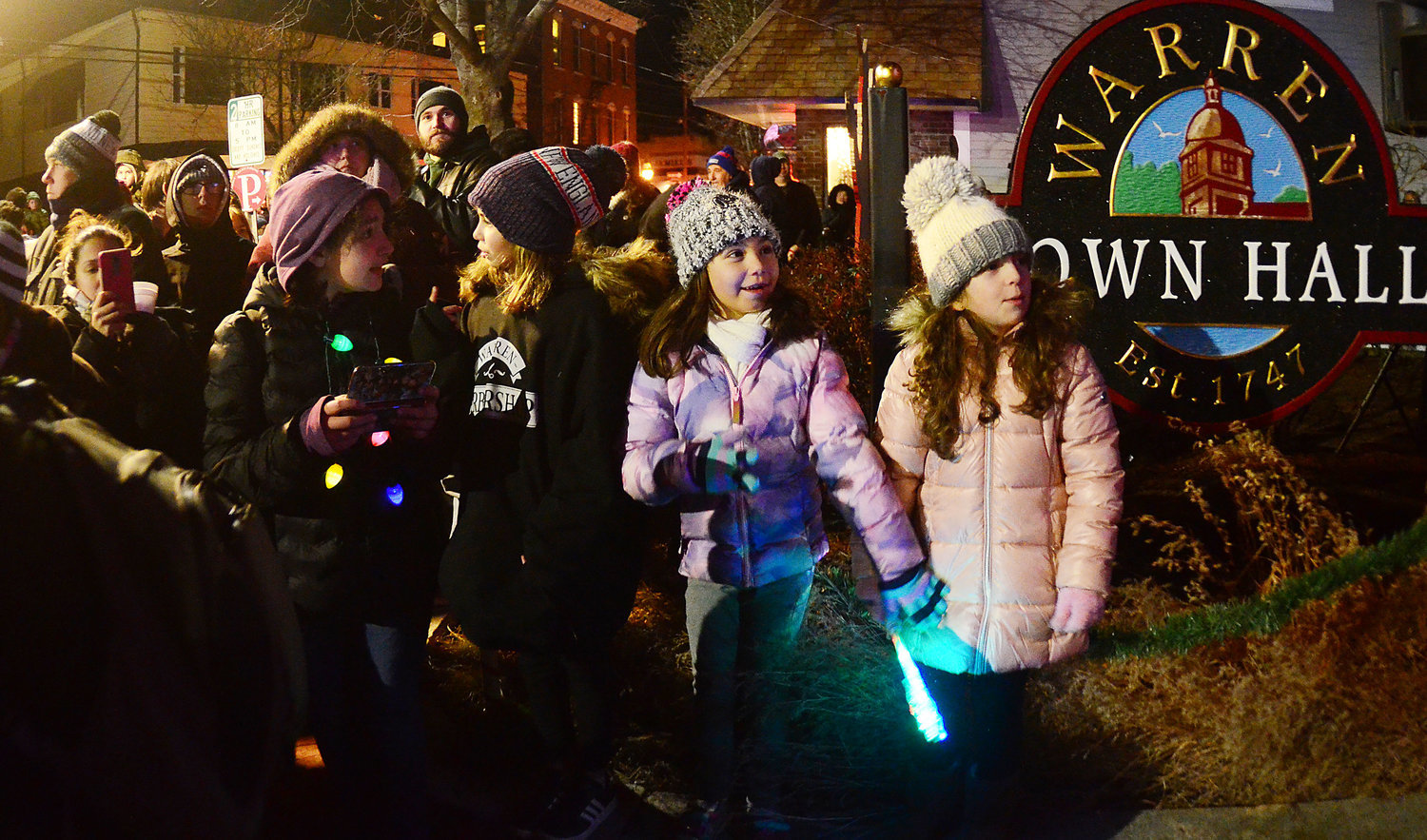 The most wonderful time of the year is almost here.

The 34th annual Warren Holiday Festival is only days away, and the new lead organizer of the festival’s volunteer planning committee, Elwood Donnelly, is thankful for the support he’s received to make it all possible.

“It takes a village,” he said in a recent interview. “It’s all thanks to our planning committee, the sponsors and volunteers. Everyone is really excited to be a part of it.”

Visitors to town during the festivities, taking place the Friday and Saturday following Thanksgiving, can expect a bounty of activities and things to do and see. Brochures will outline all the spots to partake in the fun, including a scavenger hunt for kids where they will be tasked to find nine prominent locations around town to collect a stamp and get a prize.

There will also be a raffle for a new WaterRower exercise machine, courtesy of a donation from WaterRower. Donnelly also expressed gratitude to East Bay Printing, who donated thousands of brochures and hundreds of posters to line storefront windows throughout the town.

A humble tradition has exploded in popularity

Donnelly recalled the first ever iteration of the Holiday Festival, when Baker Street resident Bill Estrella heard a passing comment from his mother, who remarked that there should be festive lights featured up and down Water Street.

“He said if I ever get on the Town Council, I'll do something about that,” Donnelly said. “Eventually, he did just that.”

Estrella and his wife made cards inviting their neighbors to join them in turning on lights at the same time, beckoned to the call by the siren from a fire truck. The festival has grown tremendously since then, with seemingly the entire town taking part in the occasion, from residents and visitors, to businesses and town officials, to Santa himself.

“It’s pretty incredible,” he said. “If you walk into a store or shop or a salon you’ve never been into before, and you’ve got a poster of the Warren Holiday Festival with you, you’re like old friends immediately.”

Donnelly added that this year there will be some lucky kids who will get the honors of flicking the switch for each illumination.

“It’s a very magical moment when the lights go on,” he said.

The festival has plenty of familiar Christmas elements throughout, but it has been, and remains, purposefully nondenominational. It’s something Donnelly said was personally important to him moving forward.

“The festival is for anyone who celebrates, anyone who loves seeing the lights,” he said. “You’re certainly welcome to practice your own religion inside your heart, but outside this is for everyone. That’s certainly going to be my mission going forward, to make sure it maintains all inclusivity.”

Go to WarrenHolidayFestival.com to see an interactive map of activities and see the full list of sponsors who make the event possible, as well as a timeline of events.