There was no rest for the Warren Fire Department volunteers this past weekend, as they responded in force to three separate fire incidents — all of which happened on Saturday, April 16, with one particularly dramatic barn fire in Touisset on Saturday night being fought into the early hours of Easter Sunday. 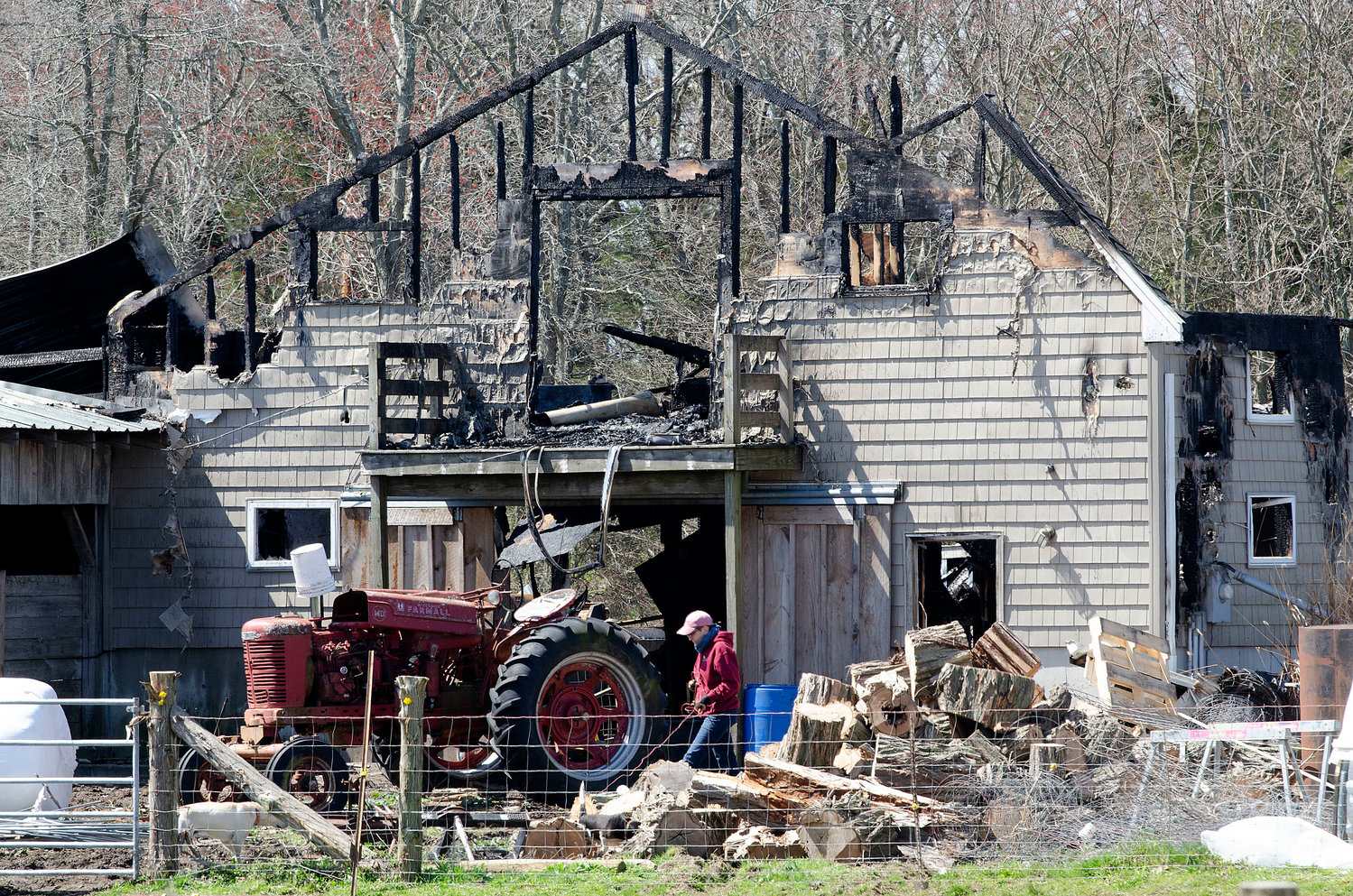 The aftermath of the Barton Avenue fire as seen on Monday morning in Touisset.
Richard W. Dionne Jr. 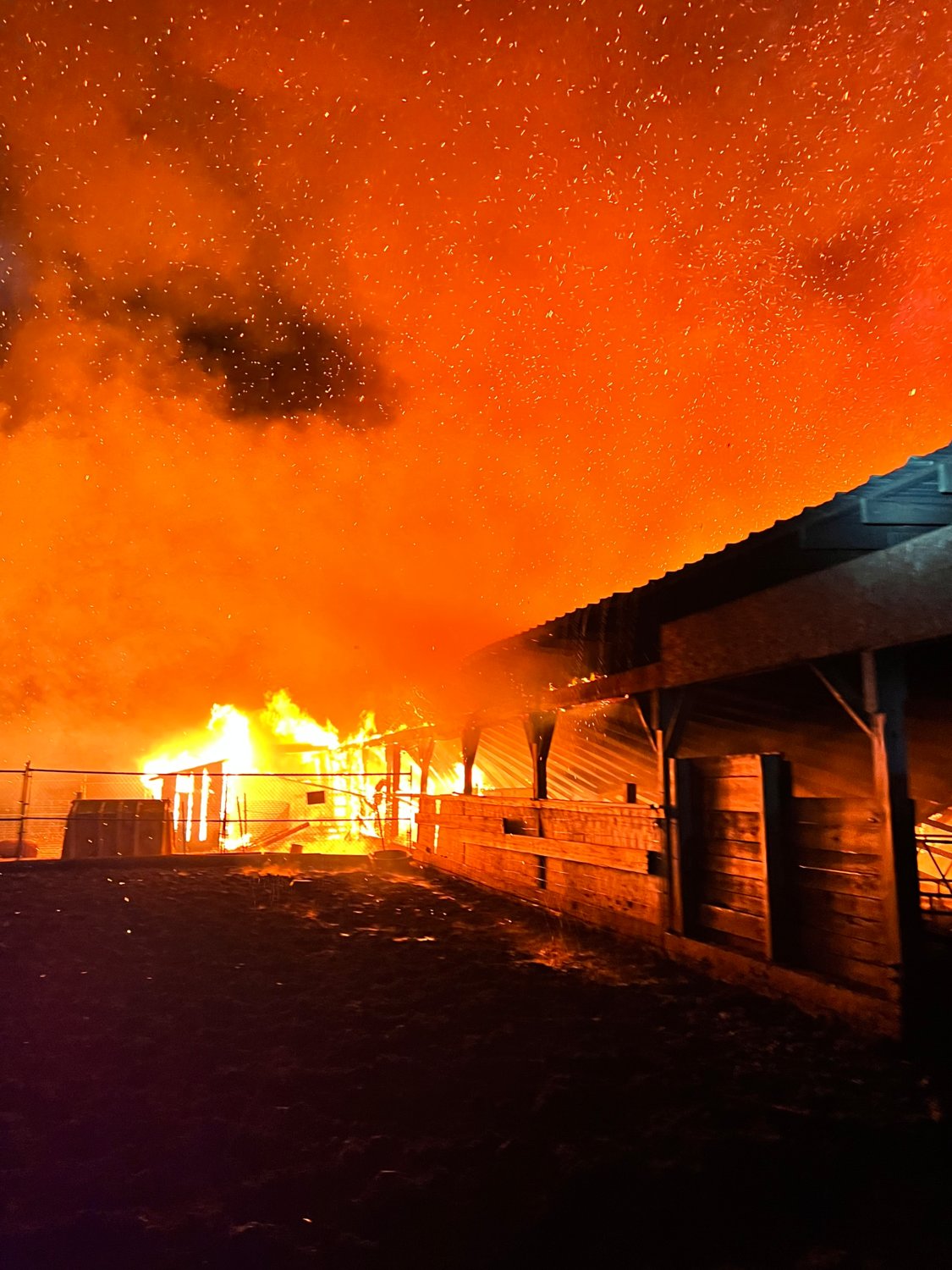 A barn seen fully ablaze on Barton Avenue in Touisset on Saturday night brought out around 40 Warren firefighters and apparatus from Swansea, Rehoboth, and Westport. No humans were injured in the fire.
Warren Fire Department 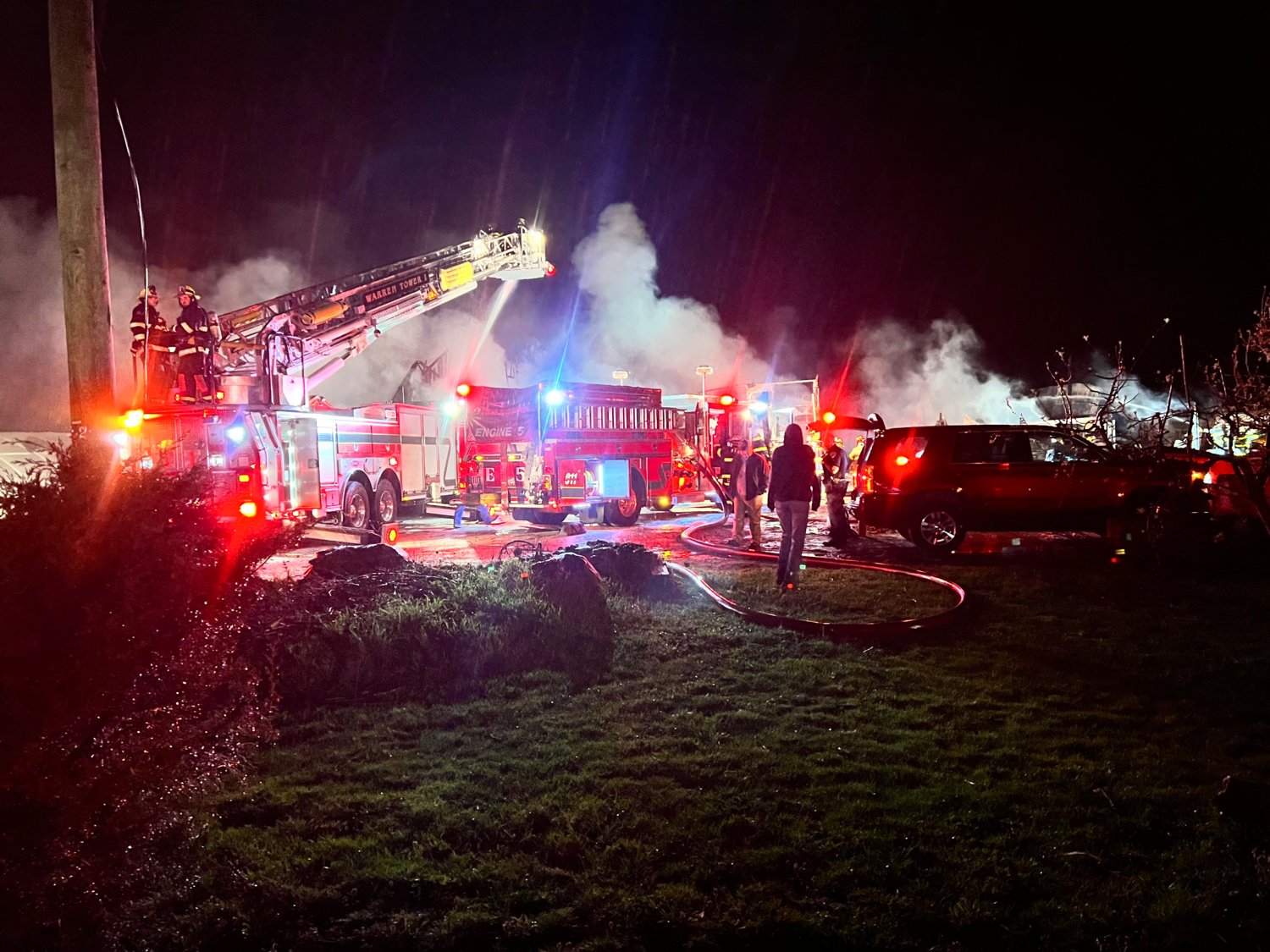 There was no rest for the Warren Fire Department volunteers this past weekend, as they responded in force to three separate fire incidents — all of which happened on Saturday, April 16, with one particularly dramatic barn fire in Touisset on Saturday night being fought into the early hours of Easter Sunday.

Warren volunteers went out first at 1:21 a.m. Saturday morning, when the Town of Swansea called out for mutual aid in fighting a barn fire in their town. Engine 1 and Fire Chief James Sousa responded to that, and wound up back in town at 2:45 a.m. No injuries were reported in that fire.

A short while after, at 4:45 a.m., a fire sparked up at a two-family apartment building at 16 Crescent Street near the Barrington line in Warren. Stations 1, 2, and 3 from Warren all responded to help beat back the flames, which had started with a fence on fire that had moved to the residential building.

Sousa said on Monday that National Grid had to be contacted to shut off power to the area so the firefighters could make a full attack on the flames. The fire was under control by 6:30 a.m. when the fire personnel left the area.

Two families, consisting of five adults and one child, were displaced as a result of the fire but no injuries were reported, and The Red Cross had been activated to provide them with assistance. The cause of the fire remains under investigation.

Touisset barn fire brings out huge response
The rest of Saturday progressed without incident until 11:23 p.m., when a large barn on Barton Avenue — belonging to Manchester Farm of 185 Touisset Road — was called in and soon became engulfed in flame.

Sousa said approximately 40 of the town’s 60 active volunteer firefighters, including all of Warren’s apparatus, as well as apparatus from Swansea and water tankers from Rehoboth and Westport, were on the scene. It took responding personnel until around 5:00 a.m. on Easter morning to beat back the fire. The Town of Bristol provided station coverage for Warren during the fire.

Chief Sousa described a frantic scene when fire personnel arrived on the scene, where neighbors and the Warren Police Department had already gathered. Responding personnel moved quickly to try and free livestock that were housed in the barn and in danger of being lost to the flames.

“We have to give the police officers credit for initially being on scene to help get animals out,” he said. “Firefighters and police were trying to figure out which gates had animals behind them, so everyone was opening any gates they could find, all through limited visibility and smoke.”

Sousa said that approximately 30 cattle were housed in the barn, and that six had ultimately perished as a result of the blaze. The rest were freed into the surrounding pasture and re-gathered after the fire was under control the following morning. Sousa said an unknown number of chickens were also lost to the fire. The cause of the fire is being investigated by the state fire marshal.

Despite the chaos and busy day, no firefighters or residents were harmed in any of the incidents.

“It’s been a while since we had a day, and an overnight, like that,” Sousa said.

Warren PD: A DUI, orphaned skunks and the start of fireworks season