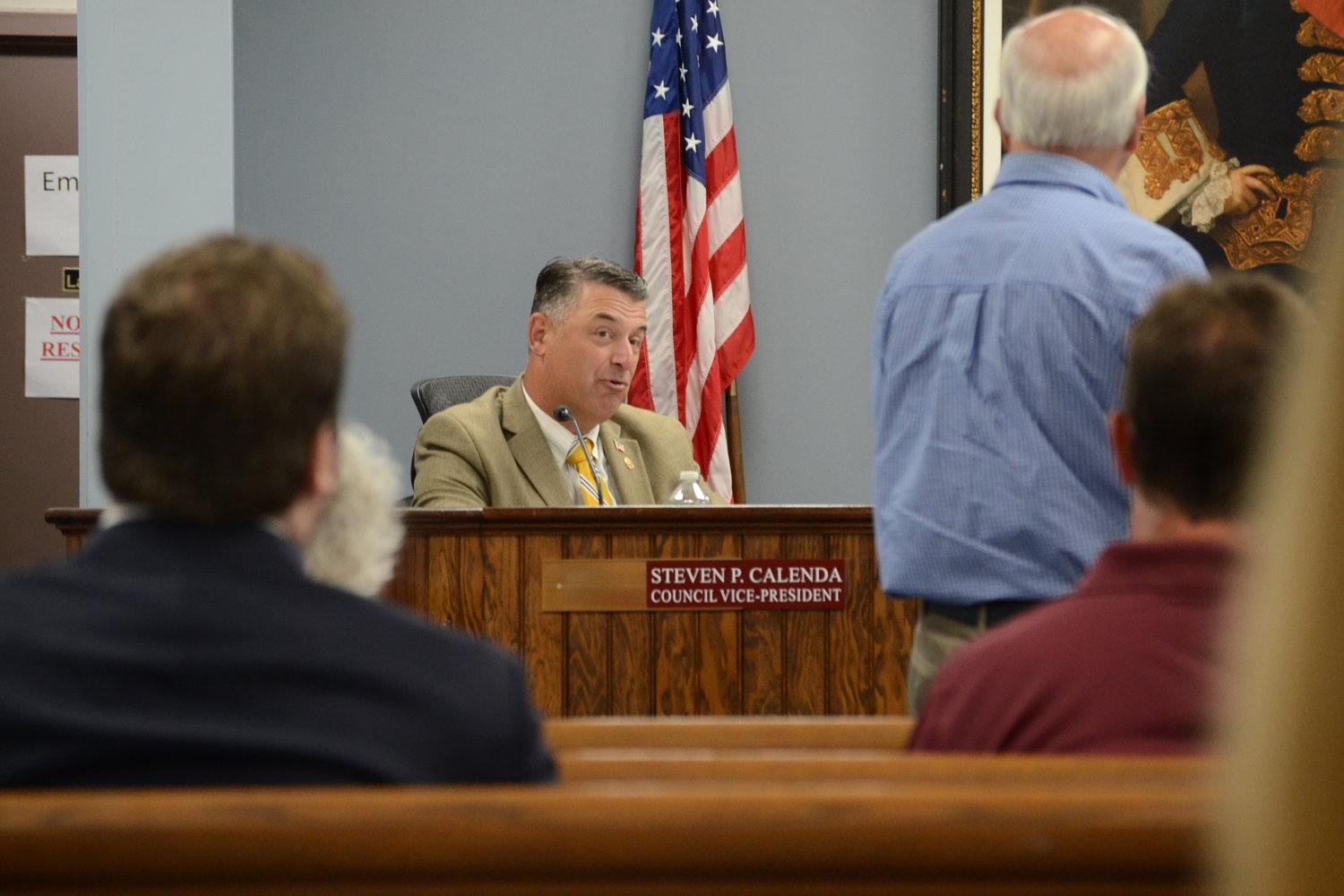 Warren Town Council Vice President Steve Calenda cried foul at the notion of reverting Council terms back to a structured, two-year term, arguing that it would effectively rob him of a year of elected service he would be entitled to under the current system.
Posted Friday, June 24, 2022 3:08 pm
By Ethan Hartley

A recommendation by the Warren Charter Commission to revert term lengths for Town Council members to two years will be decided upon by voters this November in a referendum — along with a host of other proposed charter changes that were moved forward by the Town Council during their meeting last week.

Returning to two-year terms is a move that the Charter Commission hopes will increase voter turnout and encourage more people to run for office, but neither Council President John Healey or Vice President Steve Calenda were convinced of that, and ultimately voted against sending the proposed change to voters. Councilmen Brandt Heckert and Joe DePasquale, along with Councilwoman Keri Cronin, voted in favor of sending the proposed change to voters in November.

However, under the Charter’s current language, the election cycle in 2024 would reveal an inherent math error that would create a problematic conflict — because those two Town Council candidates who, at the point of an election in 2024 would already have served a two- and four-year term (for a total of six years), would be eligible for another four-year term, bringing their total up to 10 years of service.

But the Town Charter imposes a total term limit of no longer than eight years.

As a solution, the Charter Commission proposed resetting the structure so that, by 2026, all five council candidates would be running for two-year terms.

Vice President Steve Calenda expressed frustration that the changes to the term structure would unfairly shorten the potential term he could serve if he were to run again in 2024 — and when confronted with the knowledge that serving out the full length of that term would actually violate the term limit provision in the Charter, Calenda doubled down and said that term limits, not the term lengths, were the issue.

“The Charter Commission is presenting to cut our terms in half when we’re up for re-election in 2024. It’s not fair, and it’s not right, and I don’t support it,” he said, adding later that “It would be easier to just take out the term limit item and be done.”

Town Solicitor Anthony DeSisto said that the issue regarding the conflict in the Charter would likely have to be settled in court, since there is legal precedent that the length of an election term as dictated by charter can supersede imposed term limits — but ultimately, it is not actually known what the outcome would be.

Charter Commission Vice President Frank Alfano explained that the commission did not intend to shorten anybody’s allowable time to serve, but that they were cognizant of the conflict within the charter.

“We were trying to correct that, and at the same time we were trying to offer two-year terms…The committee itself felt that two-year terms were more appropriate,” he said, explaining when prompted by Calenda that, “We looked at the 39 cities and towns in Rhode Island — 32 have two-year terms. Seven have term limits, the remainder have four-year terms, and not all of them are staggered…So what’s going on in Warren is not a usual thing in the state of Rhode Island, whether that’s a good thing or bad.”

Calenda, further arguing against the concept of two-year terms, said that shorter terms didn’t allow enough time for those elected to get their bearings.

“I thought I had a lot of experience from zoning and my past profession that I could bring to Council and I was going to hit the ground running,” he said. “It took me 18 months to get up to speed on the budget process, the different meetings, the special meetings, the executive meetings. There’s a learning curve. And that two-year term is just not enough. You need the four years to get up and running and have institutional knowledge.”

“I’ve served both terms. Four years is too long,” he said. “If the people want this, let the people have it. Give the referendum question to them. And it is difficult to talk about things that directly affect us, but it’s not fair or unfair — it’s bigger than us. It’s the seat. It’s how this will move forward. And if the people are happy with your job, they’re going to elect you.”

With the vote officially passed on reverting to the two-term structure as of 2026, Calenda motioned to eliminate the provision regarding eight-year term limits, which passed, meaning voters will decide whether or not to keep term limits or eliminate them moving forward.