Take a walk on Warren's darker side

Guided ghost tours will take you down some of Warren's most historic streets, ripe with natural (and supernatural) intrigue.

Take a walk on Warren's darker side 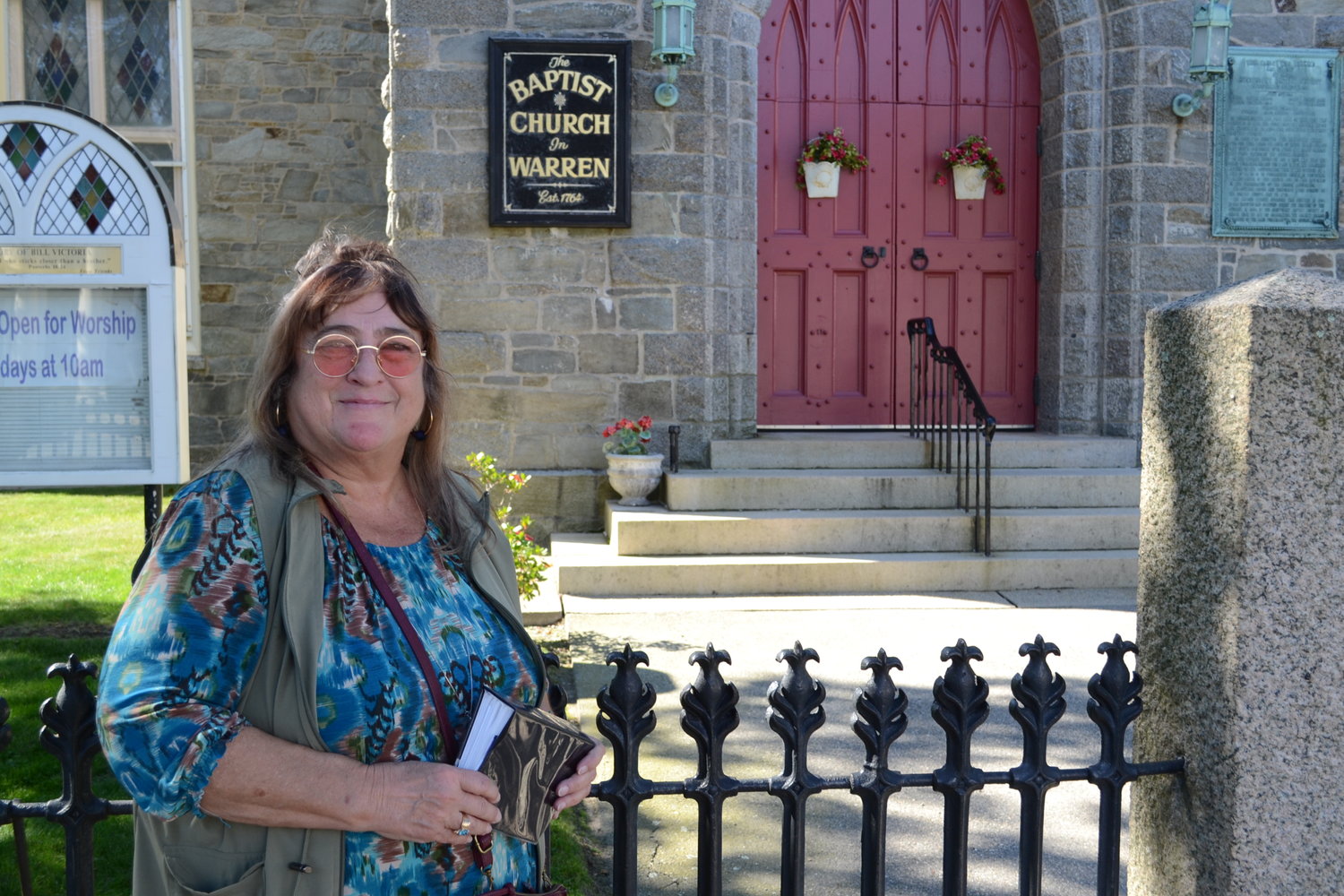 Joan Quinn has given haunted tours of Bristol for the past four years, and this year has expanded her reach to include a walk through downtown Warren, including such historic landmarks as the First Baptist Church, pictured here.
Ethan Hartley 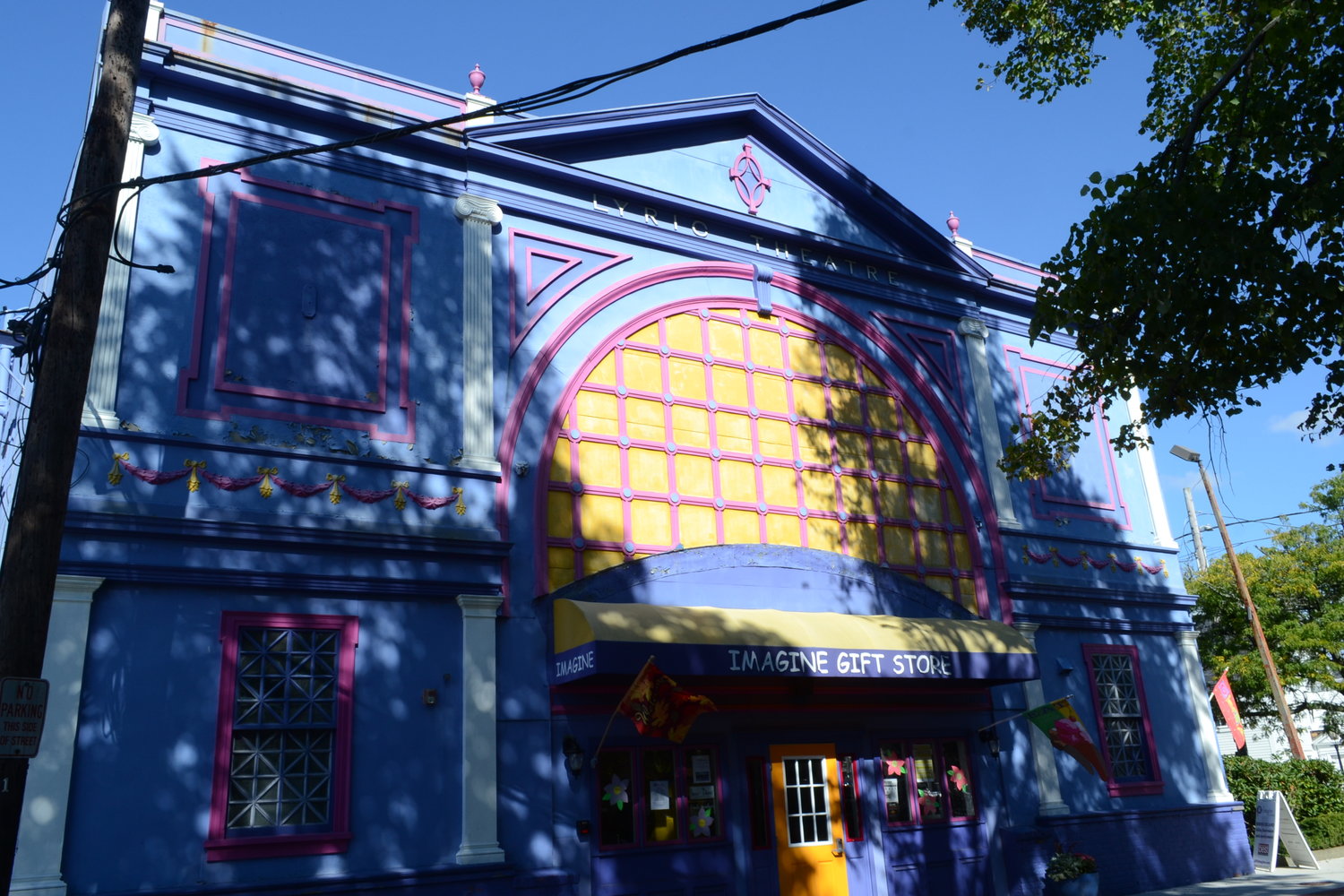 The Lyric Theatre Building, now home to Imagine Gift Shop, was constructed in the early 20th century and apparently experiences paranormal activity linked to two long-time employees who have yet to move on.
Ethan Hartley 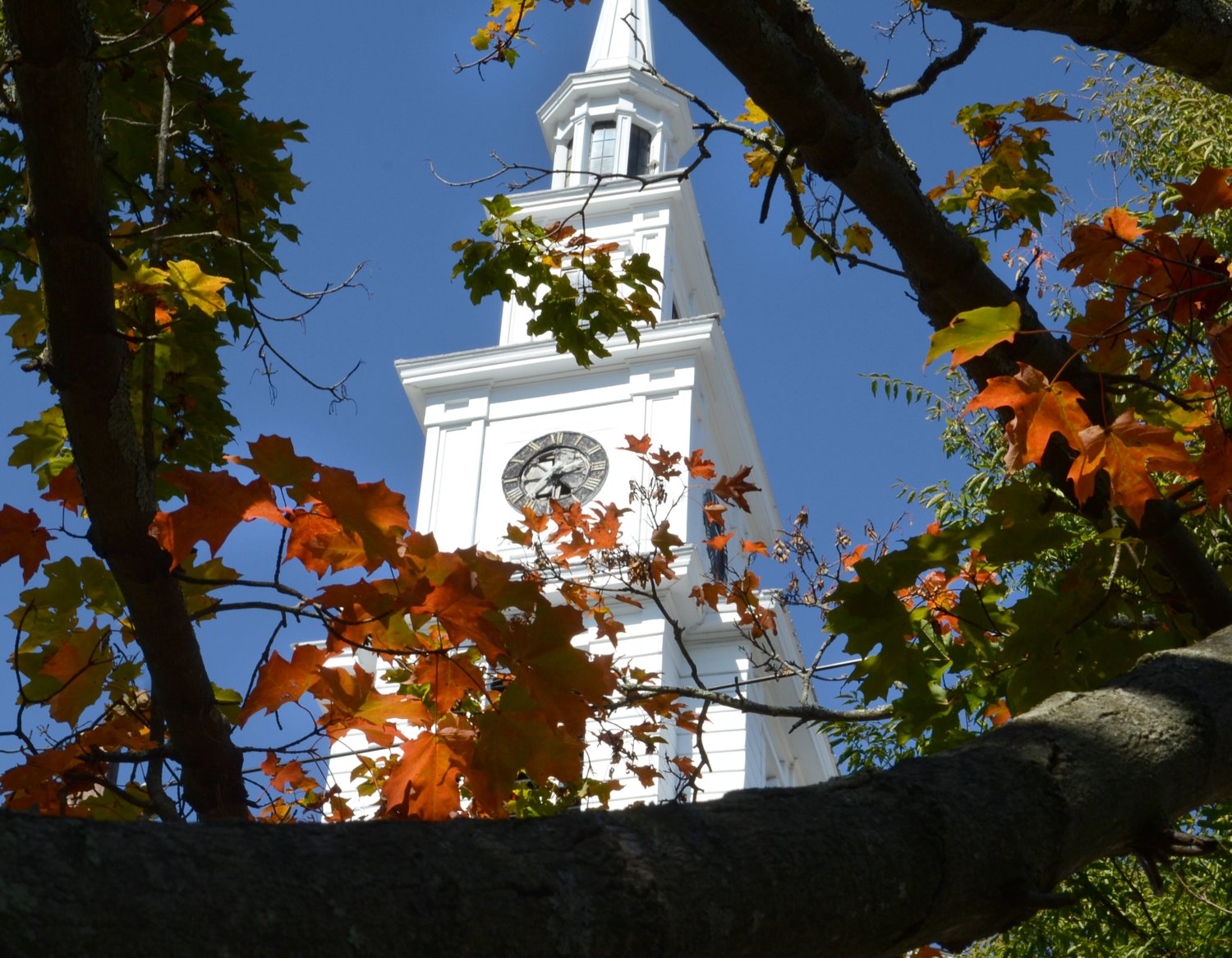 The First United Methodist Church, on Church Street in Warren, is the oldest methodist church in Rhode Island, and apparently houses the spirit of a former pastor.
Ethan Hartley 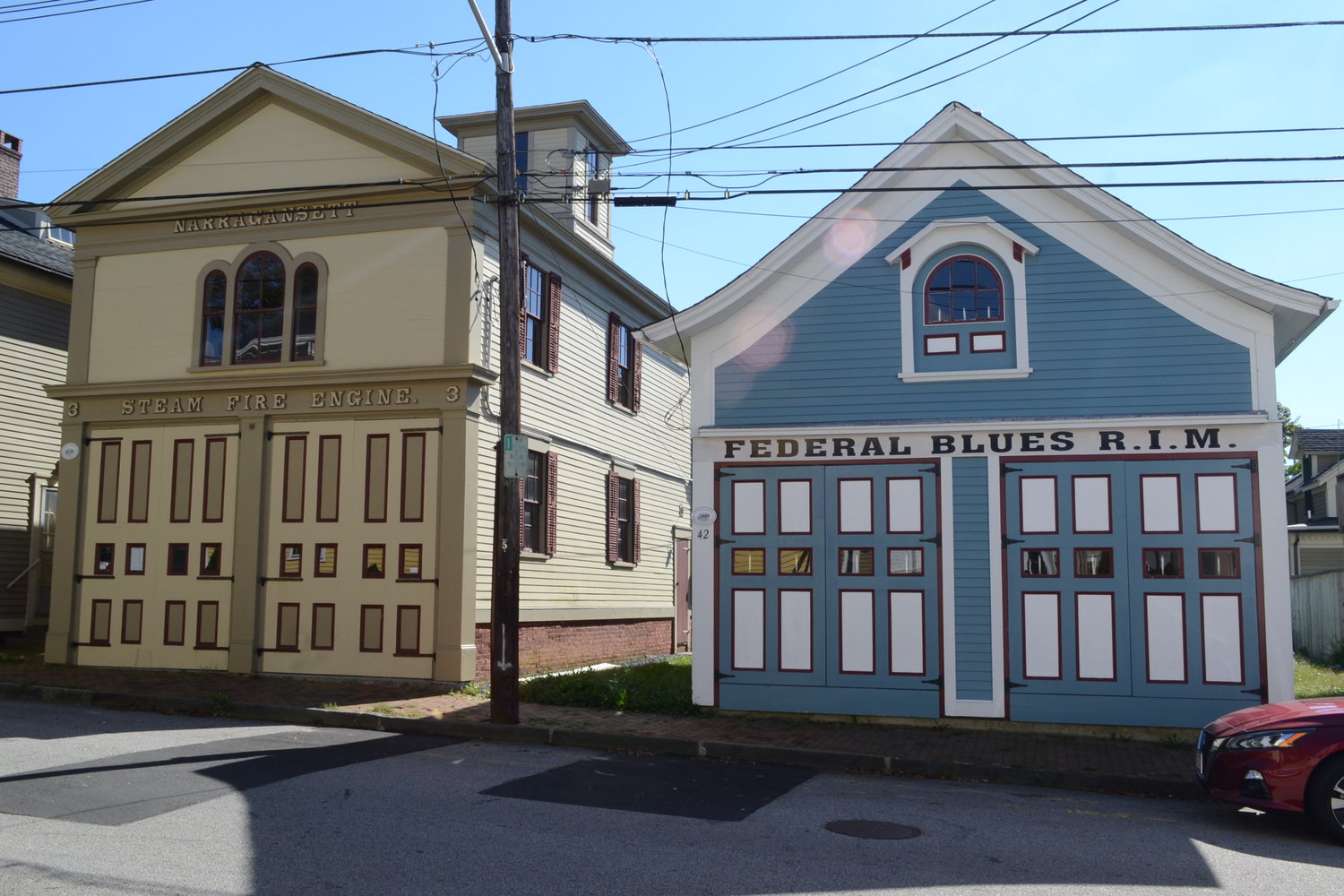 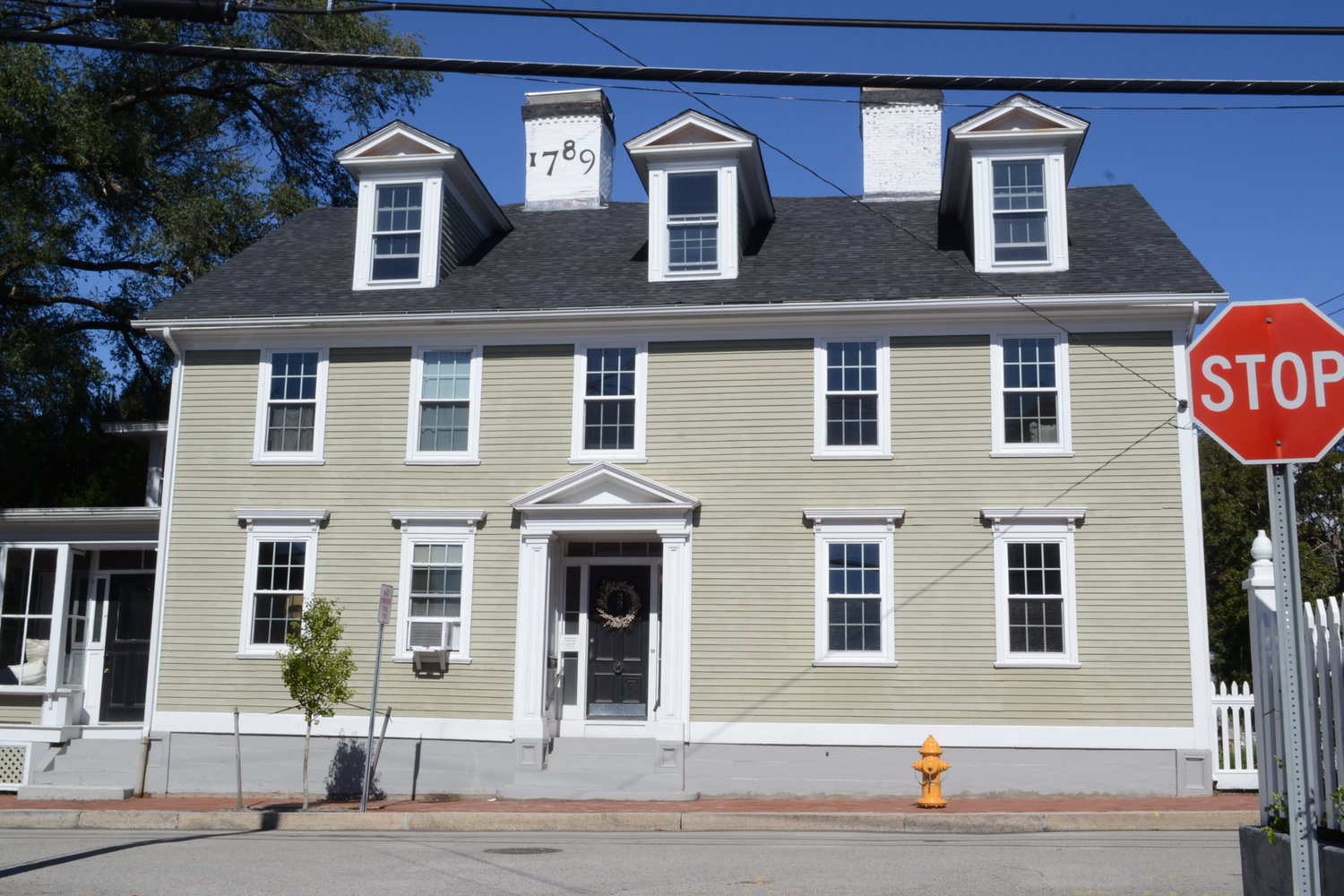 The former house of Nathan Miller on Miller Street has seen darkness in both historic and modern times.
Ethan Hartley
Previous Next
Posted Thursday, October 14, 2021 10:42 am
By Ethan Hartley

They all exist within a couple square blocks of each other in uptown Warren — and they’re all reportedly haunted.

Regardless of whether you believe there exists something supernatural beyond our immediately perceived reality, or you think such beliefs are a bunch of nonsense, anybody who appreciates history will surely enjoy an evening autumnal stroll hosted by historian and paranormal researcher, Joan Quinn.

Indeed, even Warren natives may be surprised at the sheer concentration of historically significant and interesting structures that are peppered throughout the modest area covered by the tour, which begins at the First Baptist Church on Main Street and includes stops along Water, Baker, and Church Streets.

“I always say you can feel the history in the air,” Quinn said. “The Pokanokets thought that this was sacred ground. Out of all the land that they had — all the way up to Plymouth — right here in Warren and in Bristol, this was special to them. There was something here that they felt was holy.”

Originally from New Jersey, Quinn’s work with museums and historical societies has taken her from Trenton to Charleston, S.C. and eventually landed her on the East Bay, where she has worked for the Newport Preservation Society and the Rose Island Lighthouse.

Four years ago, after compiling research on its own haunted history, she began walking tours in Bristol that ran every night throughout October and November. Once she started to realize that she was unable to answer some questions from tour participants without bringing up Warren, she knew she needed to expand her reach into Bristol’s northern neighbor.

“Boy, there was a lot more than I thought,” she said.

The striking stone building that gazes down upon motorists arriving to town from Market Street is actually the third building to host The Baptist Church of Warren since the original wooden building was constructed in 1764, which was burnt down by the British during a raid in 1778.

The building we see today was designed by famed architect Russell Warren and constructed in 1844, complete with a bell that was made by the even-more-famous Paul Revere in 1800.

From this hallowed ground is where the tour begins, and Quinn provides an overview of the Pokanoket people who inhabited the land long before any English colonists arrived. She speaks of how the Pilgrims were ill-prepared for the New England winter they faced shortly after arriving, and only survived thanks to the benevolence of the Pokanoket people. That camaraderie eventually coalesced into the first treaty between the English and the natives of North America, and some local historians believe that friendship also means something else — something that historians from Plymouth likely find controversial.

“Our people think the first Thanksgiving took place in Bristol on Mt. Hope Farm,” Quinn said, adding that this year would mark the 400th anniversary of such a gathering.

But the good times were not to last. Eventually relationships soured, war broke out, and the blood which soaked the land during King Philip’s War began the darker history of Warren’s lineage. Quinn tells the tale of a settler who killed a Pokanoket warrior during a raid on his village, only to have more warriors return and kill that settler, plus seven more, in retaliation.

“As was kind of the thing in the day, they quartered them and cut off their heads,” she said. “And their heads were never found. Only their bodies.”

For hundreds of years, people have reported seeing the ghostly apparitions of the settlers heads near the banks of the Kickemuit River, floating shrouded in a ghoulish green glow, possibly looking for their bodies.

Phantoms of the theater

On the corner of Main and Miller Streets sits a building that, by its appearance and from an initial browse of its merchandise, wouldn’t appear to harbor anything besides cute gifts and sugary sweets. But the building that now houses the Imagine Gift Shop, which was built in the early 1900s, used to be the majestic Lyric Theatre.

Two long-time employees of the theater have reportedly never left. One, a ticket-taker named Emily, is said to still be heard whispering, ‘Can I help you,’ into the ears of gift shop patrons. The other, an usher named Joe who took great care to shush those talking during a show, is apparently still on the job long after leaving the Earthly realm.

Footsteps heard going up stairs when no one else is around are heard, and toys that were neatly displayed in the upstairs area that used to be the theater’s projection room have been found thrown around on the floor when the owners have opened in the morning. As far back as when the theater was still operating, a shadowy apparition has been seen lurking from the balcony.

“They would look up and see this guy sitting and looking very stoic, and they’d go up to investigate and nobody would be up there,” Quinn said.

Of Masons and men named Miller

Traveling down Miller Street, guests are told the story of the street’s namesake, Nathan Miller, a brigadier general with the Rhode Island militia who lived out his short life following the Revolution in a home where an unsolved murder from the 1970s also later occurred. The historic home features a spine-tingling story of toys being turned on and moved around.

A left turn on Narragansett Way brings you face-to-face with the Firemen’s Museum on Baker Street, an historic carriage house that also apparently houses a shadowy apparition — possibly attached to antique artifacts located within.

Across from the museum is Washington Lodge No. 3, the second-oldest continuously operating Masonic Lodge in the nation. Formerly used as Warren’s Town Hall, the lodge still supposedly retains the spirit of a judge that can be heard slamming doors stomping up the old staircase, and his distinct cherry pipe tobacco aroma can still be smelt despite smoking being banned inside for decades.

Down Baker Street, a short skip on Water Street and a left onto Church Street brings you to the First United Methodist Church, which holds the claim of the second oldest Methodist Church in New England and the oldest in Rhode Island. A pipe organ inside is said to play by itself, “When it wants to,” and the spirit of one of its first pastors has been observed and heard pacing back and forth, blocking the light from underneath the door to the office, only to find nobody inside.

Are you a believer?

Quinn spoke of her initial reluctance to speak openly about her belief in the paranormal and whether it would taint her reputation as a historian. However, some of her personal experiences — ask her about them on the tour, they are quite intriguing — have left her with no alternative explanations.

“Something I always ask at the beginning of a tour is ‘Are you believers?’ And if they’ve had an experience, they are,” she said. “You can’t explain some things away, and believe me, I’ve tried.”

If you’re curious, skeptical or just a hardcore fan of history and haunted happenings during the spookiest time of year, call up Joan Quinn at 401-286-1209 to book a tour. You may leave with a new perspective, a new appreciation of Warren’s history, or maybe even an experience of your own.

“Where did we come from? Where were we before this? To think of all this energy and where does it all go, it almost makes sense to think there’s something else, some other plane,” she said. “There’s so much we don’t understand.”

This weekend, it’s a Bio-Blitz along the bike path