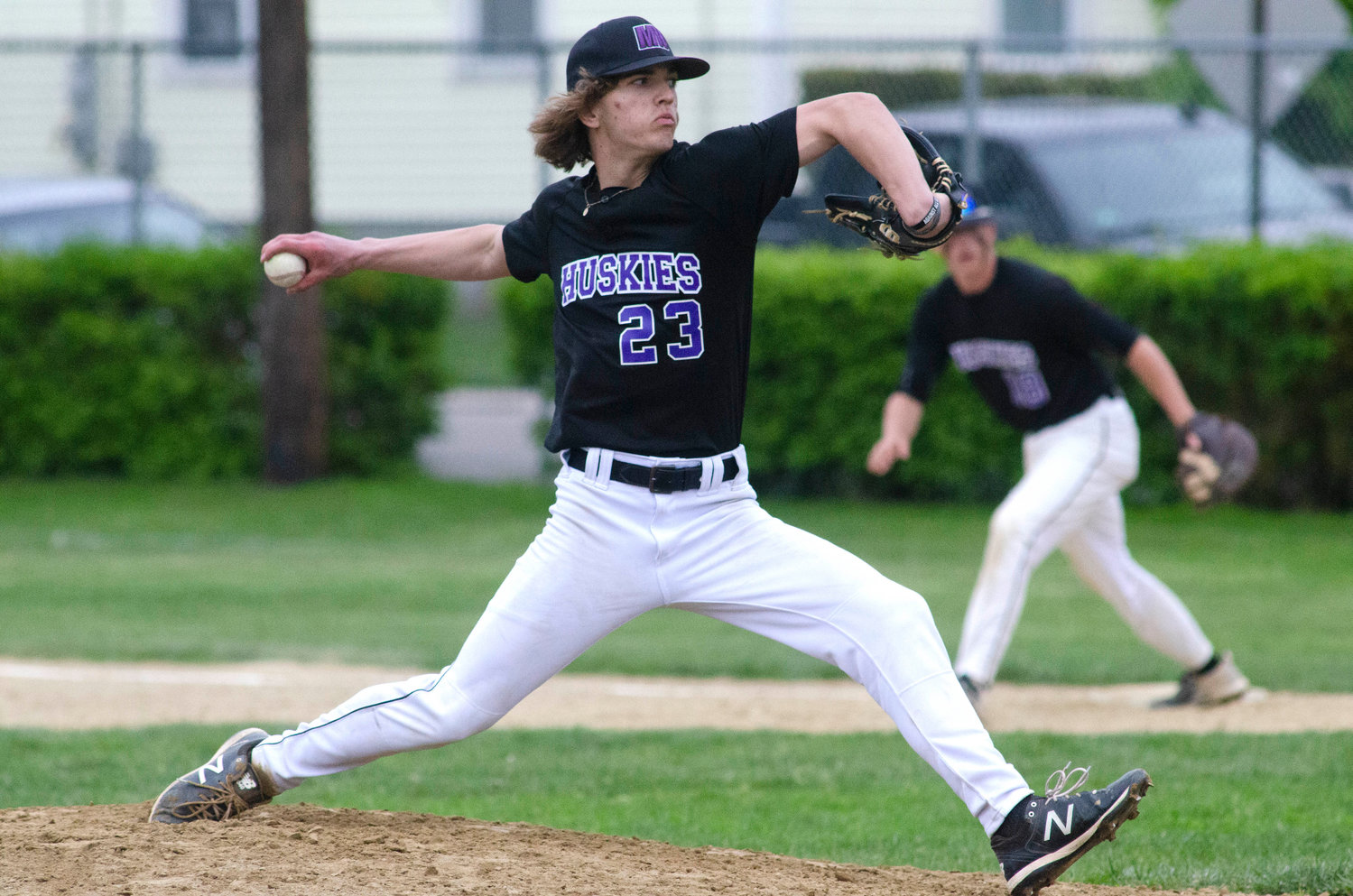 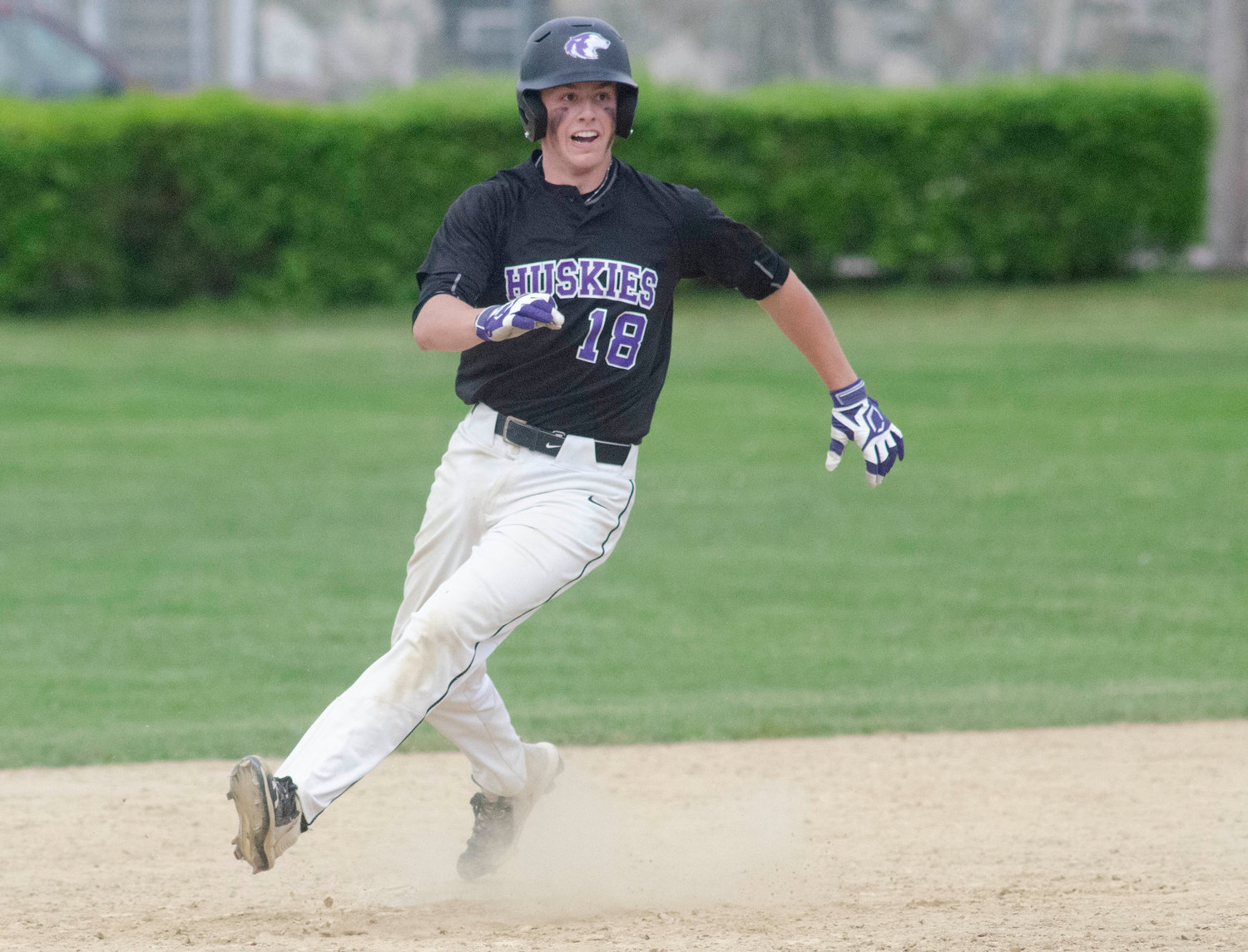 First baseman Matt Gale stayed hot against La Salle, smashing a double in the six inning to score AJ Jones to give Mt. Hope a 3-0 lead. In photo, Gale rounds second base in the team's win over East Providence.
Story by Richard W. Dionne, Jr.

Mt. Hope starting pitcher Brad Denson struck out ten in a complete game, two hit shut out as the Huskies beat La Salle 3-0 in Providence on Thursday afternoon. The Huskies who have won six in a row, have improved their Division I-B record to 10-7 and have climbed into fourth place behind North Kingstown, South Kingstown and Portsmouth. La Salle dropped to 10-8 and are in fifth place behind the Huskies.

“Brad has been excellent for us,” said Mt. Hope head coach Mike Mazzarella. “I’m very happy with the way he went out and competed. He attacked the strike zone and kept the La Salle lineup off balance all game.”

Denson was strategic, allowing just two hits as he kept the Rams off balance with his fastball and curve. The junior right hander struck out two in the first, two in second, and one in each of the third, fourth and sixth before striking out the side in the seventh. He faced just 27 batters in a 107 pitch effort. The Huskies defense was stingy and did not allow an error behind Denson.

“The team is really coming together,” Coach Mazzarella said. “Our pitching has kept us in games all year. I think the biggest factor in our recent success has been our defensive play. We’ve cleaned up a lot of those mistakes.”

Defense and Mt. Hope’s timely hitting have been key factors in the winning streak. The Huskies in fact scored the winning run in the first inning when freshman lead off hitter Ethan Santerre chopped a grounder to La Salle pitcher Kyle Bourque and he thew it over the first baseman’s head for an error. Santerre moved to second on the play and then ran to third base on a single up the middle by senior shortstop Dayton Van Amberg. Bourque then made a crucial mistake and balked. Santerre was awarded home plate to give Mt. Hope a 1-0 lead and the only run that they would need the rest of the way. Van Amberg moved to second base on the play, but Bourque settled and retired the side.

Santerre scored again in the third inning to give Mt. Hope a 2-0 lead. Senior center fielder Aidan Ramaglia drew a walk to lead off the inning and then stole second base. Santerre then smacked a single to center field giving Mt. Hope runners at the corner bases. Mt. Hope attempted a double steal and Ramaglia was tagged out at home plate. Bourque struck out Van Amberg for the second out, then walked Parker Camelo and Jack Standish to load the bases for Denson.

The five hitter singled home Santerre from third base and loaded the bases again for AJ Jones. But Bourque struck Jones out to end the threat.

Mt. Hope scored a third run in the sixth inning. Bourque hit Jones with one out. Huskies first baseman Matt Gale who has been hot at the plate, bashed a double to right field. Jones scrambled all the way home from first base to give Mt. Hope a 3-0 lead.

Coach Mazzarella was especially happy to get a strong win against his alma mata, La Salle. “To get a win is always nice, to get a win vs my alma mater, felt even better. The team is working hard and coming together at the right time of the year.”

If the Huskies beat La Salle at home in the second game of the series on Tuesday, they will be rewarded with a home playoff game the following Tuesday, May 31.