A meeting of the Bristol Warren Regional School Committee was abruptly ended after meeting attendees refused to wear masks as mandated by Governor Dan McKee and the RI Department of Health. 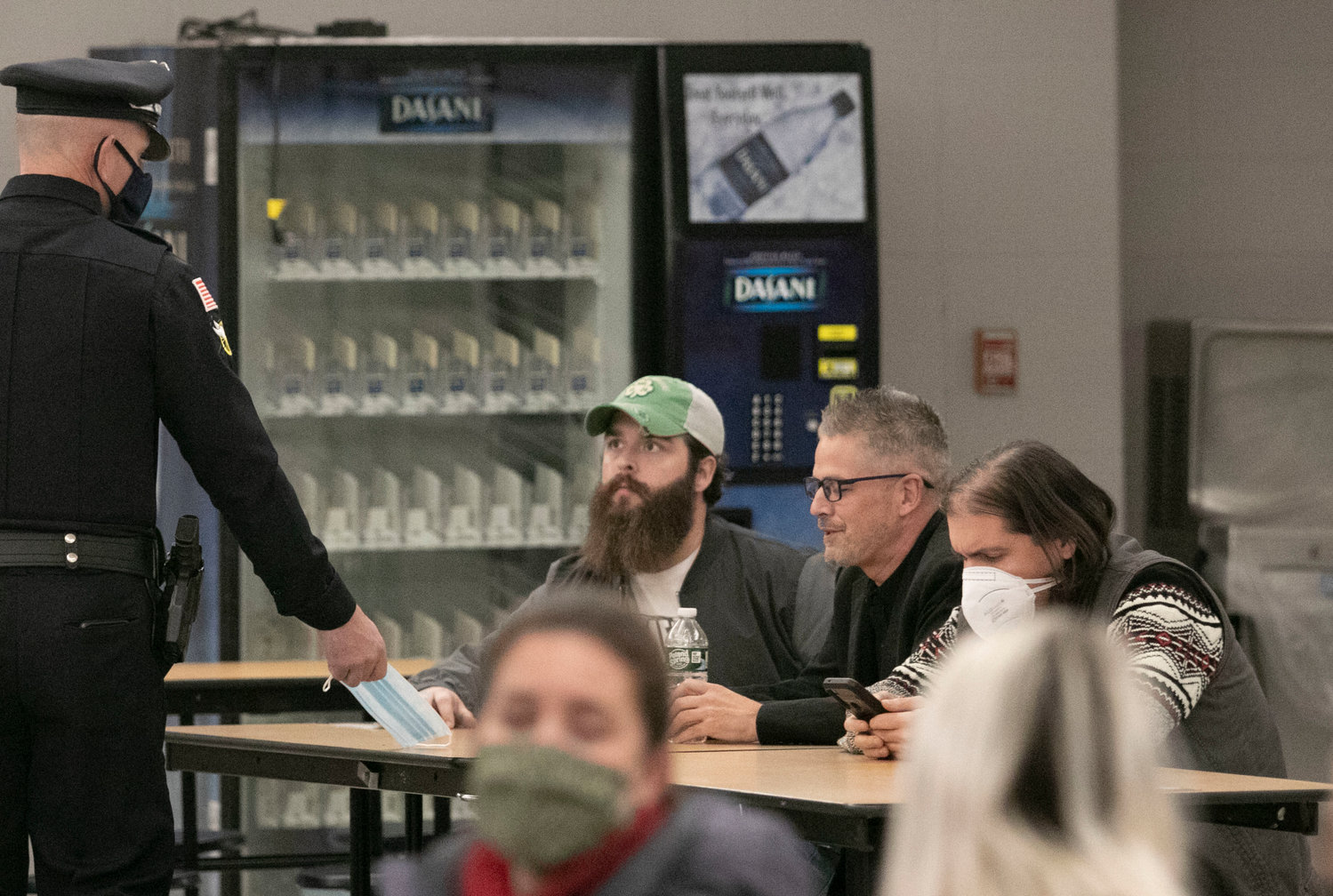 John Fennessy, an outspoken opponent of mandated mask wearing in public spaces, is provided a mask by a member of the Bristol Police Department. He refused to wear one, and shortly after the meeting was abruptly adjourned. Next to him is Daryl Gould, who also refused to wear a mask.
Richard W. Dionne Jr. 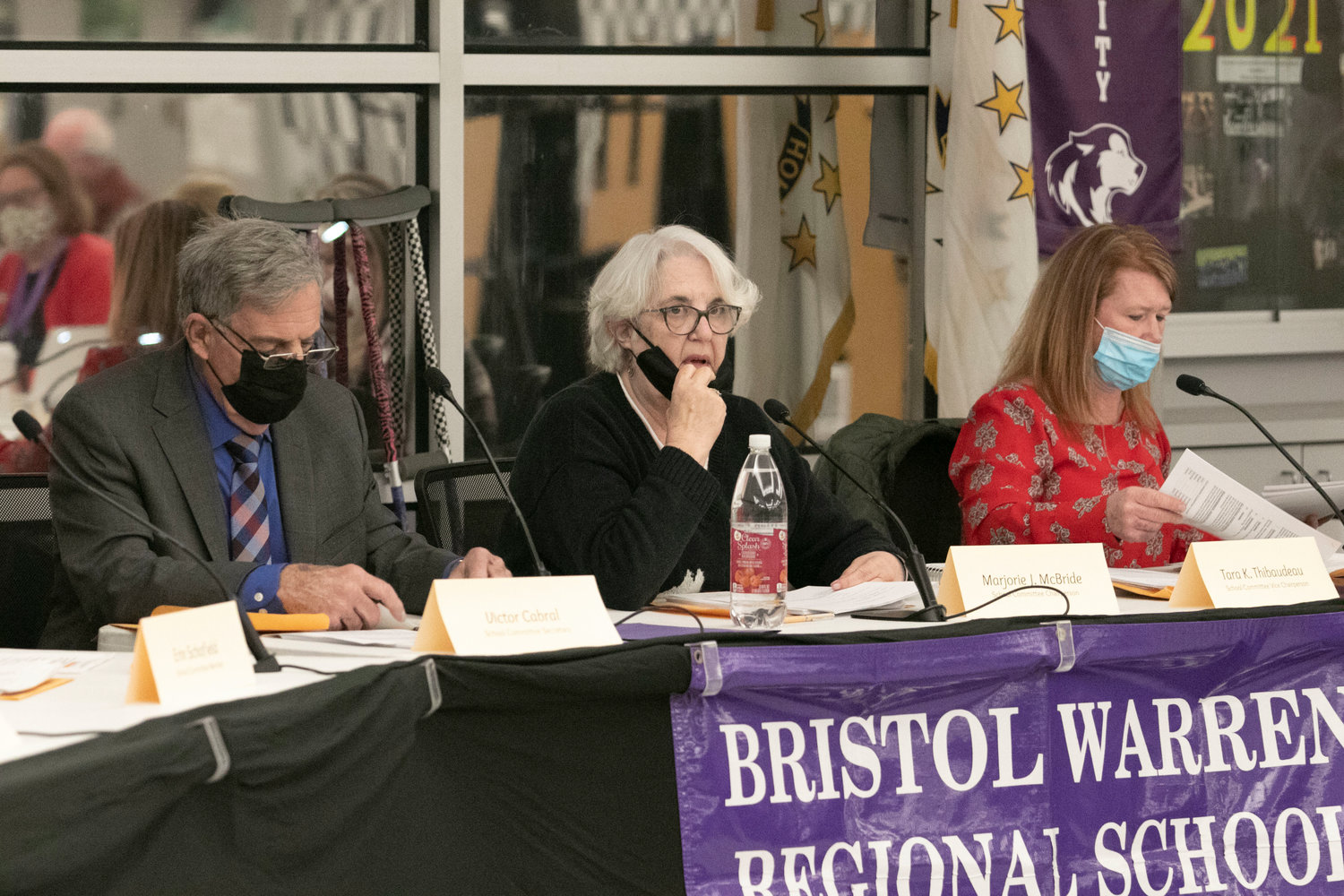 School Committee Chairperson Marjorie McBride informed the public that masks would be mandated and enforced at the beginning of the meeting. To her right, Vice Chairperson Tara Thibaudeau opted to wear a mask during the meeting as well.
Richard W. Dionne Jr. 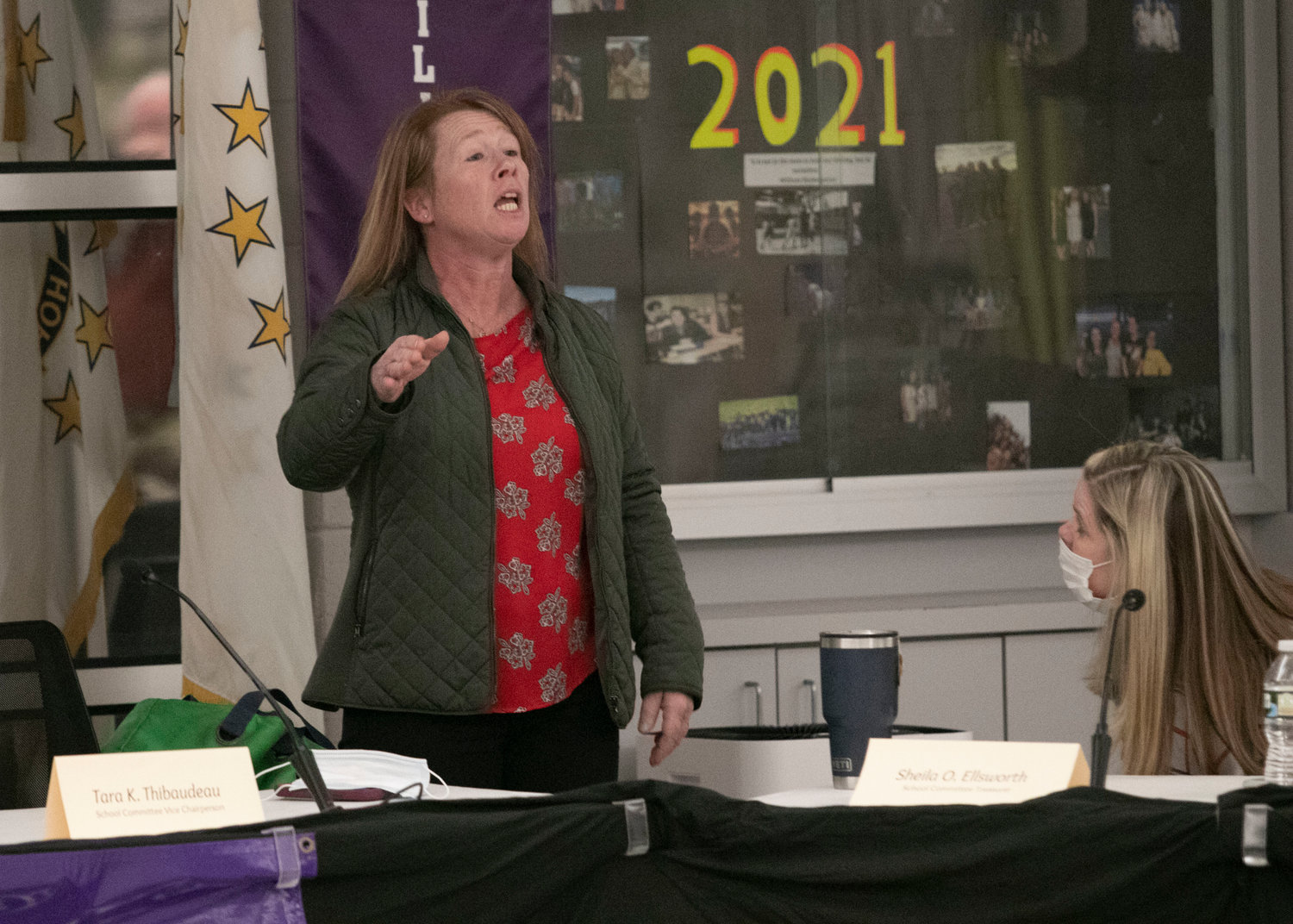 Frustrated following the adjournment of the meeting, Thibaudeau took her mask off and denounced the decision, calling it “ridiculous” and “silly” to end a meeting because a couple of members of the public wouldn’t wear masks.
Richard W. Dionne Jr.
Previous Next
Posted Wednesday, December 15, 2021 3:39 pm
By Ethan Hartley

The Bristol Warren Regional School Committee meeting at Mt. Hope High School on Monday night ended abruptly after multiple members of the attending audience refused to wear a mask — which is mandated by state executive order and, as of Monday night, is now being actively enforced by the committee.

Committee Chairperson Marjorie McBride informed the room of around 50 attendees, many of who showed up not wearing masks, that the committee would be recognizing and enforcing the state’s mandate, which requires the wearing of masks inside public school buildings at all times. McBride said that the Rhode Island Department of Health had already “cited” the district for not enforcing a mask mandate and that the district “could be fined” if they continued to hold meetings without doing so.

McBride tried to reason that members of the audience who continued to refuse wearing a mask after the announcement should look at things from a different perspective.

“I think that those people who don’t have masks ought to understand, the parents here who ask their children every morning to put a mask on and go to school have the right to ask you to put a mask on or leave the building,” she said.

However, two members of the audience — Daryl Gould and John Fennessy, both regular attendees of meetings and outspoken opponents to mask mandates — continued to refuse to wear a mask. After speaking with the school committee’s legal counsel Mary Ann Carol and talking back and forth with some members of the committee, McBride opted to close down the meeting.

“It is the pleasure of this committee that unless the members of the audience all have a mask on that we will adjourn the meeting tonight,” she said. “So I give you one more opportunity to put the mask on. I can’t make you happy one way or another, all I am asking you to do is put a mask on.” She then adjourned the meeting.

The agenda for the meeting included, for the first time since the mask mandates had been enacted in August, a disclaimer at the top referencing Governor Dan McKee’s mandate that masks were required for all school committee attendees. The disclaimer appeared after a story ran in this paper and the Bristol Phoenix regarding public backlash that had come following three school committee members not wearing masks during a full-house meeting in November.

On the docket was the acceptance of a nearly $50,000 Champlin Grant for the Mt. Hope fine arts lab, the acceptance of 50 computers via a donation, and the approval of the revised FY22 budget. An additional agenda item, vaguely described as a discussion item named “Covid Update”, was also listed. None of those items were attended to prior to the adjournment.

Thibaudeau masks up, then boils over

School Committee Vice Chairperson Tara Thibaudeau, who found herself at the center of the controversy regarding committee members not wearing masks during meetings, abided by the mandate alongside all other members of the school committee. At one point, chairperson McBride asked her to pull the mask above her nose, which she did.

But when McBride motioned towards the possibility of ending the meeting rather than allow unmasked attendees, her frustration with the issue started to emerge.

“Why can’t we just move on? So we’re going to be in trouble [with RIDOH],” she said to McBride. “Let’s move on, this is important.”

Then, shortly after the adjournment, Thibaudeau tore off her mask and vented more thoughts on the issue.

Reached after the meeting, Thibaudeau said that she elected to wear a mask not because of the mandate, but because it was her personal choice to do so. She reiterated that important issues were not being discussed because masks are taking priority over educational issues that she wants to work on, such as school safety, vandalism and disciplinary issues, mental health, tardiness, and obesity.

“I am frustrated. I don’t care whose fault it was, I don’t blame anybody,” she said. “I’m not saying I’m angry with Marje [McBride] or those men. I’m frustrated for our kids. COVID has dictated everybody’s lives and we have to choose, COVID or education.”

School committee member Nicky Piper said that the situation could have been easily avoided.

“To me it’s simple,” she said. “Put a mask on and we can continue with the business. But some were not willing to do that, and I don’t get it.”

The Bristol Police Department had a presence at the meeting, and at one point an officer even attempted to give a mask to Fennessy and Gould, which they denied to wear. McBride did not request assistance from the police to remove individuals who refused to follow the mandate.

According to Major Brian Burke of the Bristol Police Department, their role at these types of meetings is simply to keep the peace. He said that if a member of the audience became disorderly, they would be able to step in and remove the individual, but he said that to his understanding, the behavior exhibited on Monday night did not rise to that level. Burke added that it was the purview of the school committee chairperson to control, oversee, and carry out the rules of the meeting.

Newly-appointed superintendent Ana Riley did not respond to a press inquiry.