Following its second COVID-forced delay in as many years, Bristol Bookfest will return in April for a deep dive on another classic work of fiction: Frankenstein; or, The Modern Prometheus. 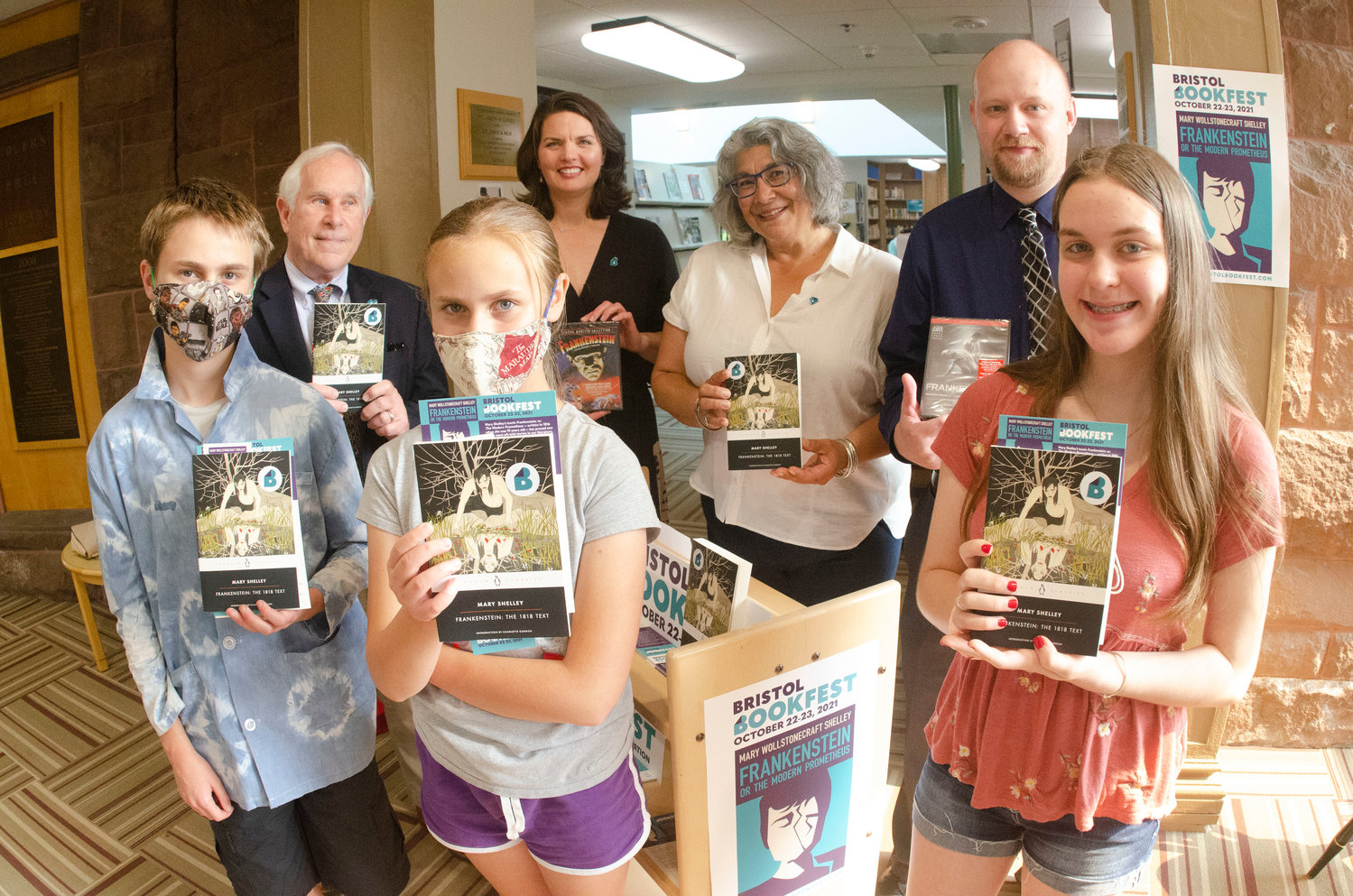 In this photo taken in July 2021, before COVID forced its postponement, youth readers Sampson Lombard, 13, (left), Fran Lombard, 11, Emily Cabral, 14, Co-founder Charles Calhoun (back left), steering committee members Amy Vitale and Renee Soto, and former Library Director Ryan Brennan hold up copies of Mary Shelley's Frankenstein, the selection for Bristol Bookfest, now rescheduled for April 1-2. The books were donated to the library by the steering committee, and will be available for participants to borrow.
Posted Monday, February 28, 2022 9:51 am
By Christy Nadalin

Following its second COVID-forced delay in as many years, Bristol Bookfest will return in April for a deep dive on another classic work of fiction: Frankenstein; or, The Modern Prometheus.

Written in 1816-17 when author Mary Shelley was still a teenager, it has proven one of the most popular stories in literature and film and is considered the first true work of science fiction.

Much like 2020’s selection, All The King’s Men, described as "Quite possibly the best novel ever written about American politics,” organizers carefully considered current events when choosing this book.

“While created more than 200 years ago, it has never felt so immediate as today, when humans seem on the verge of creating artificial life,” said historian Charles Calhoun, BookFest co-founder. “Just two things to remember: Frankenstein is not the name of the ‘creature,’ it’s the name of his creator, a young Swiss doctor who discovers the secret of re-animating dead tissue. And Mary Shelley’s novel is far more complicated than the popular versions associated with Boris Karloff or Mel Brooks.”

The birth of ‘Frankenstein’
The story of Frankenstein’s writing is almost as fascinating as the story itself.

Started when she was only 18 and recovering from the death of her first child, the story began as part of a parlor game challenge in a villa on the shores of Lake Geneva during the wet, gloomy “year without a summer” of 1816, caused by volcanic dust from an Indonesian volcano. “They didn’t have the Weather Channel,” said Doug Popovich, president of Arts in Common. “It was dark, crops were failing, all this stuff was going down, and they did not know what was going on.”

The house party, which included Shelley’s lover (and future husband) the poet Percy Bysshe Shelley, their host Lord Byron, and Byron’s doctor John Polidori, decided to see who could write the best ghost story. Polidori didn’t do badly — he invented what became the vampire genre. But Mary Shelley outdid him. She crafted a frame narrative told in a series of letters: An Arctic explorer learns of a giant, human-like “beast” haunting the snowy wastes – and soon meets the much-battered Dr. Frankenstein, who slowly confesses his complicity in a tragic scenario of good intentions and moral failings.

“It is a tale of great psychological and philosophical depth,” said Mr. Calhoun. “It asks the basic question: what are we doing here?”
“Today we’ve already reached the point where we can no longer be certain where our own minds end and the minds of our computers start,” said Calhoun. “Rapid advances in Artificial Intelligence, robotics, and gene-splicing mean that we’re standing, like Victor Frankenstein, staring into an abyss. It might be full of good things. It might not.”

About Bookfest
Bookfest is far and away more than a shared reading; it’s a program designed to inspire, deepen understanding, and enrich community life, with a keynote address, presentations and panels by scholars in relevant fields — in this case, literature, history, bioethics, and film. The program also includes a themed dinner and closing reception. Related activities, including a film festival, are being planned by Rogers Free Library.

Registration is open and required as space is limited. Calhoun urges those interested to start reading; copies of the paperback (1818 version) are available at a discount at Inkfish Books in Warren and at local libraries.

The two-day event brings to Bristol audiences with a distinguished range of scholars to dissect Frankenstein: The Friday, April 1 Keynote will feature writer and medical doctor Jay Baruch, an emergency room physician on the Brown University Alpert Medical School faculty, from 5 to 6:30 p.m. in the nave of St. Michael’s Church,399 Hope St., which can accommodate more than 300 people.

On Saturday, April 2, Dr. Baruch will be joined by film historian Alexandra Keller, director of the Film and Media Studies Program at Smith College; literary historian Declan Kiely, Exhibitions Director of the New York Public Library; author Dr. Christoph Irmscher, Distinguished Professor of English at Indiana University; and BookFest Co-Founder Charles C. Calhoun, Bristol-based biographer and historian for a full day of presentations, panels, and small group discussions. The day’s events will be held from 9 a.m. to 5 p.m. in the Linden Place Ballroom, 500 Hope St., which can accommodate 110 literary-minded attendees. The day ends with a reception open to all registrants at the Rogers Free Library, 525 Hope St.

Among the topics to be discussed are the medical ethics of trying to “improve” humans, how people and society pass judgments about character based upon appearance, the relationship of the Frankenstein story to 19th-century debates on slavery and 21st-century ones on climate crisis, and Mary Shelley’s feminism and her relationship with the Romantic poets, including Percy Shelley and Lord Byron.

“Today we’ve already reached the point where we can no longer be certain where our own minds end and the minds of our computers start,” said Calhoun. “Rapid advances in Artificial Intelligence, robotics, and gene-splicing mean that we’re standing, like Victor Frankenstein, staring into an abyss. It might be full of good things. It might not.”

The library has copies of the novels, the iconic 1931 film, plus movies based on the Frankenstein story, and Mary Shelley’s biography. And in March, they are hosting two adult book groups as well as a four-film series curated by Alex Keller and Charles Calhoun.

“Coming together to discuss this book, which has had such a profound cultural impact for more than 200 years, is wonderful and important thing to do in Bristol today,” said library interim co-director Charlotte Burnham.

“Shelley brings to life the monster we know best: a being longing for peace in solitude, the intimacy of true companionship, a respite from harrowing loss and its effects,” said Soto, a poet and professor of creative writing at Roger Williams University. “In these ways, Mary Shelley’s monster is terrific, because it’s familiar to us all.”

“It’s amazing that a girl at just 18 — and who had experienced both great joy and despair — would begin writing the story of Frankenstein as a party-game challenge,” Soto said.

“Reading in community helps us read more deeply and provides an opportunity that we ordinarily do not have—to get to know one another better as readers living together,” Soto added. “The greatest friend to the creature was a person without eyesight. One of Shelley’s challenges to us is to know one another beyond any expectations we might have based on what we see first. How much more 21st Century could she possibly be?”

Space is limited and registration is required.

To support the safety of all audience members and speakers, only the fully vaccinated should register and plan to attend. For more information about the book, the event, and registration details, visit BristolBookFest.com, on Facebook and Instagram, or email Hello@BristolBookFest.com.