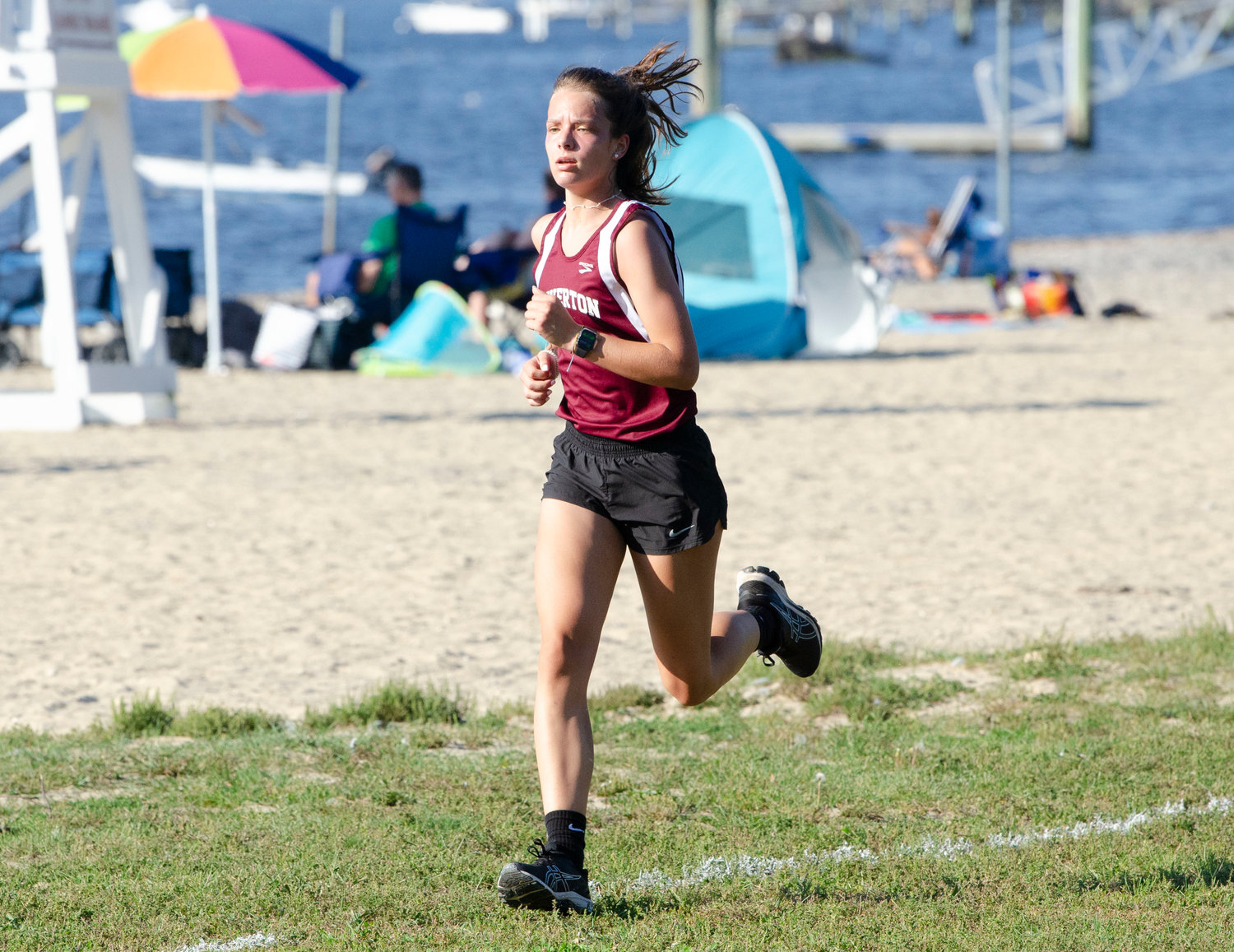 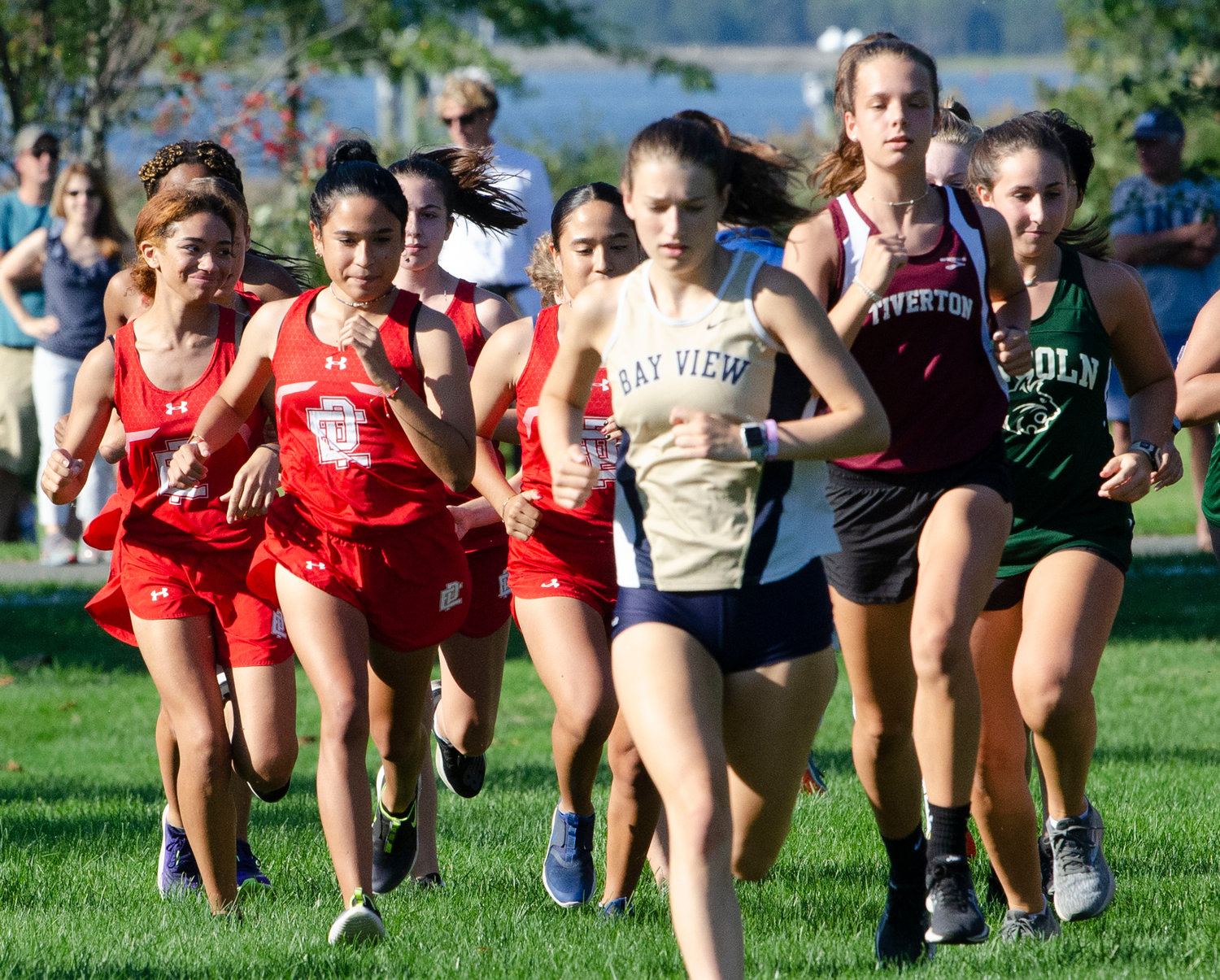 Tiverton's Ellery Pacheco (right) gets off to a good start to the cross country race in Bristol.
Photos by Richard W. Dionne, Jr. 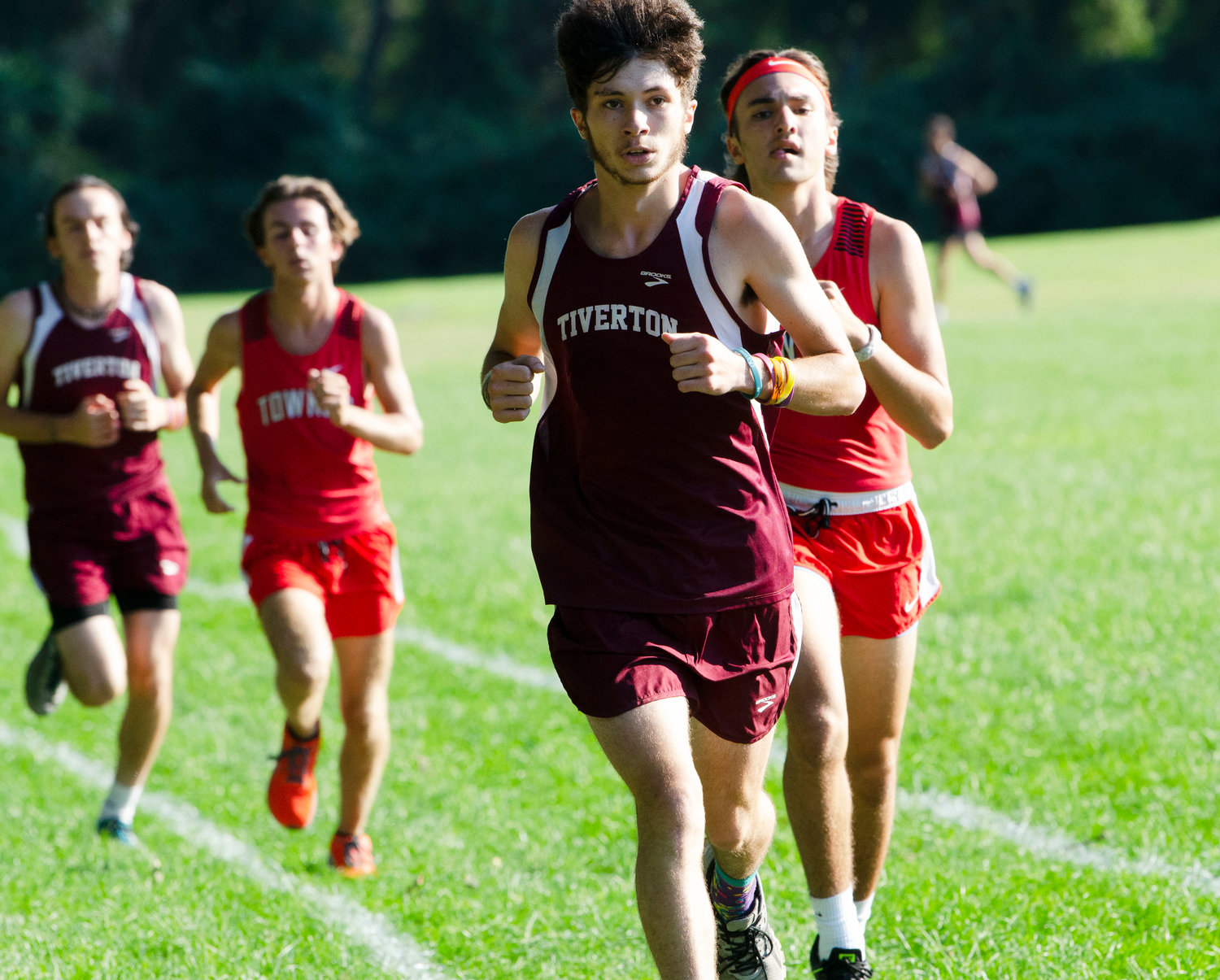 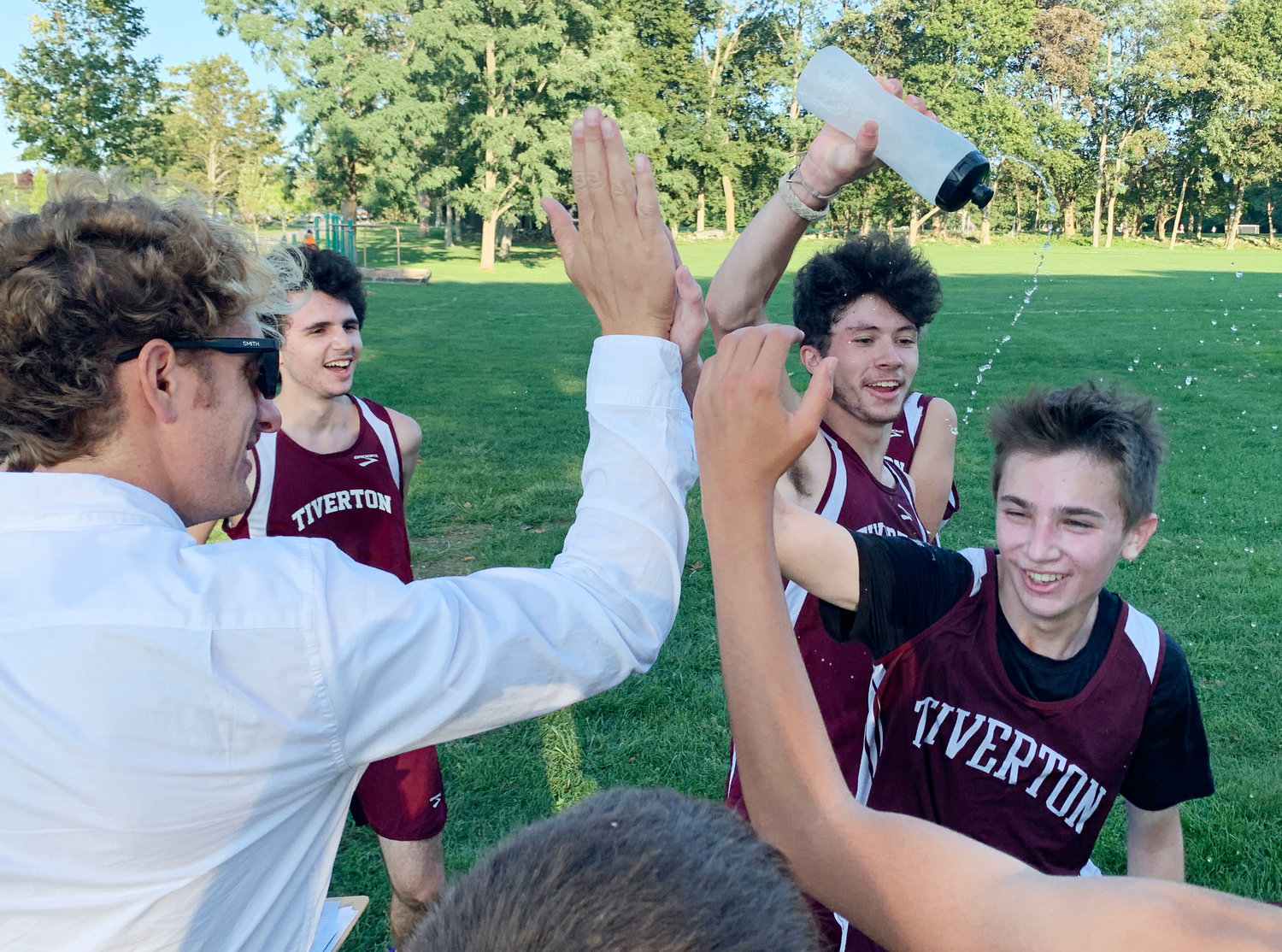 Coach John Digangi gives a high five to Ryan Hite as captain, Ryan Souza douses the Tiger with water after he finished the race.
Photos by Richard W. Dionne, Jr. 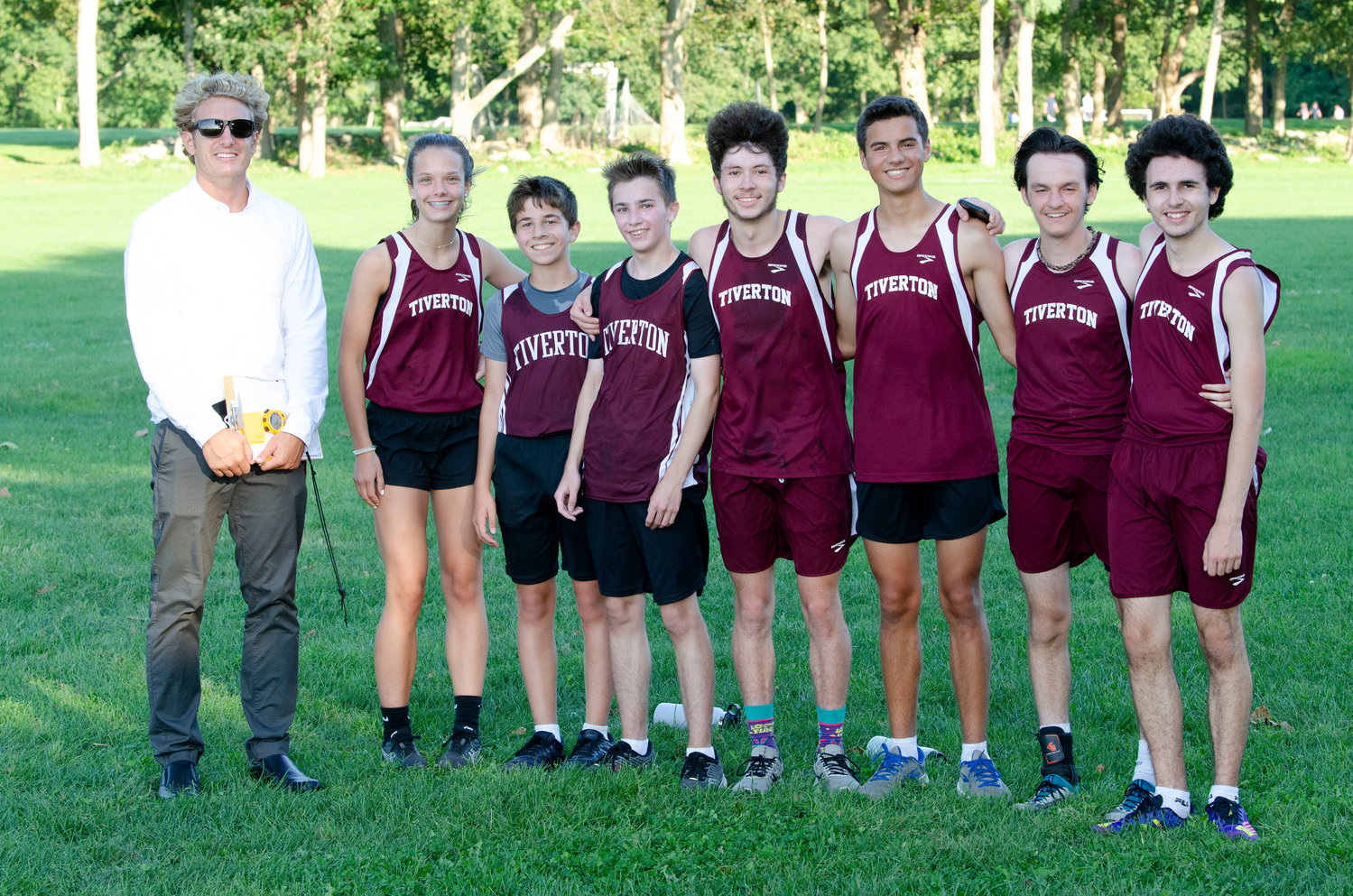 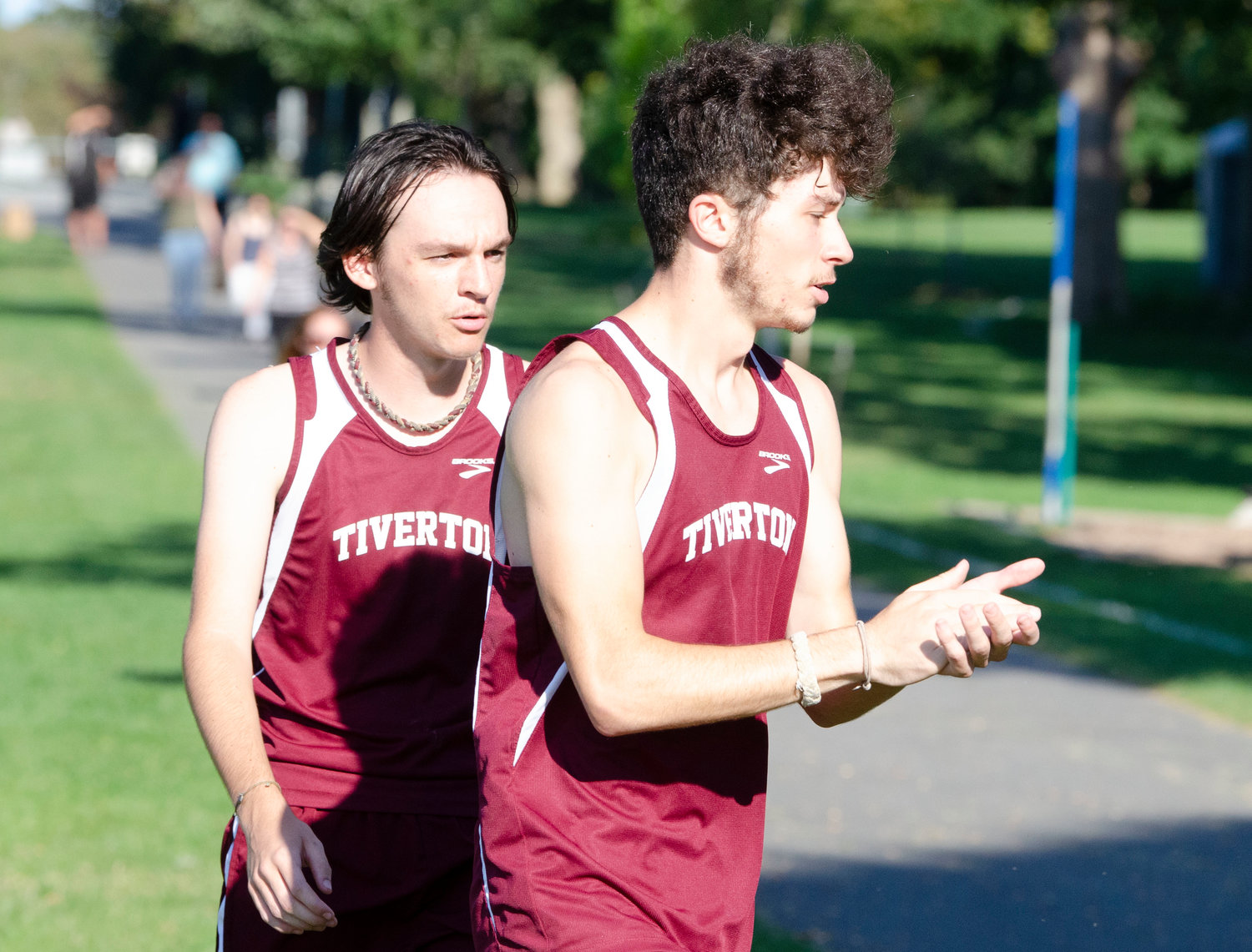 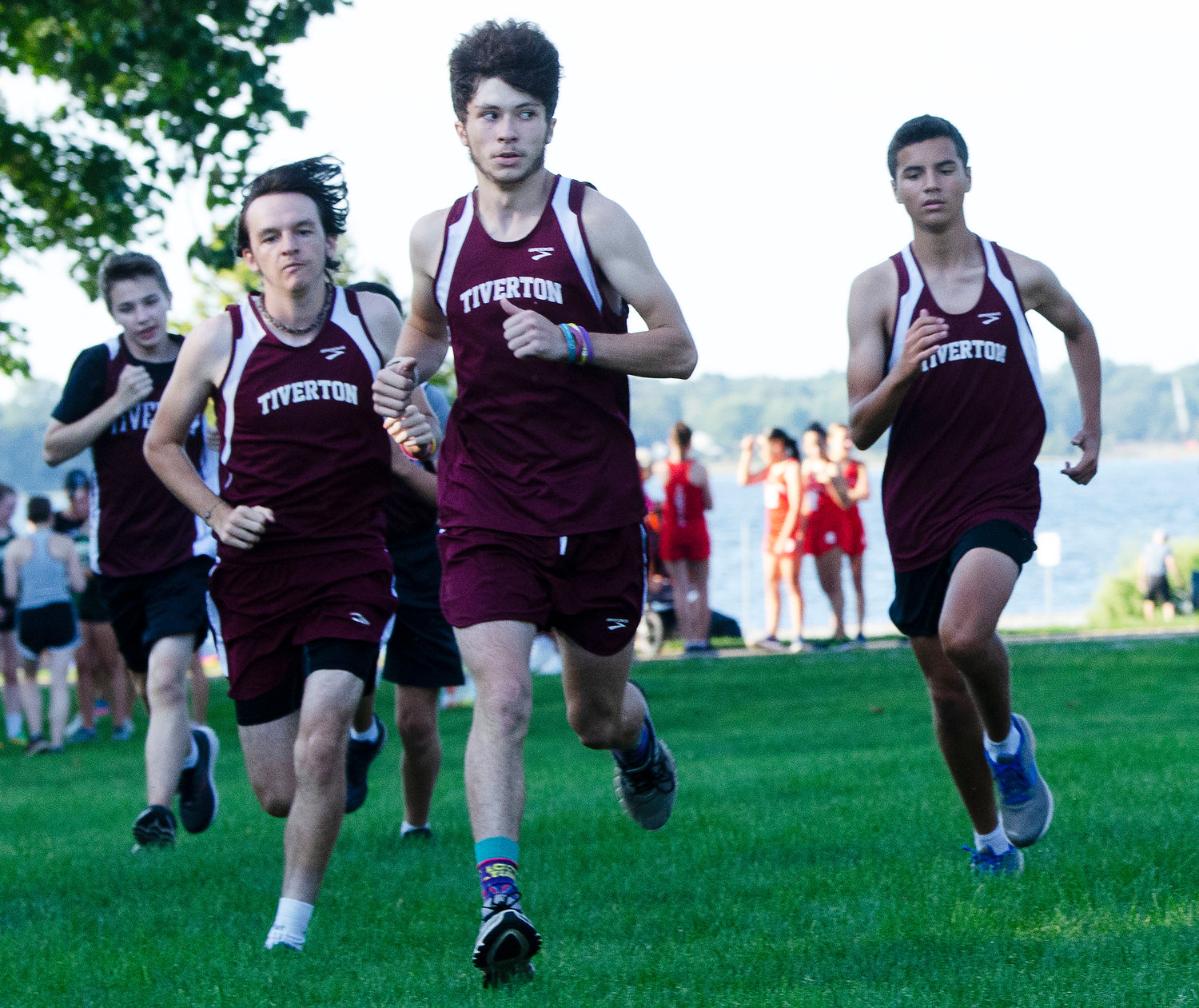 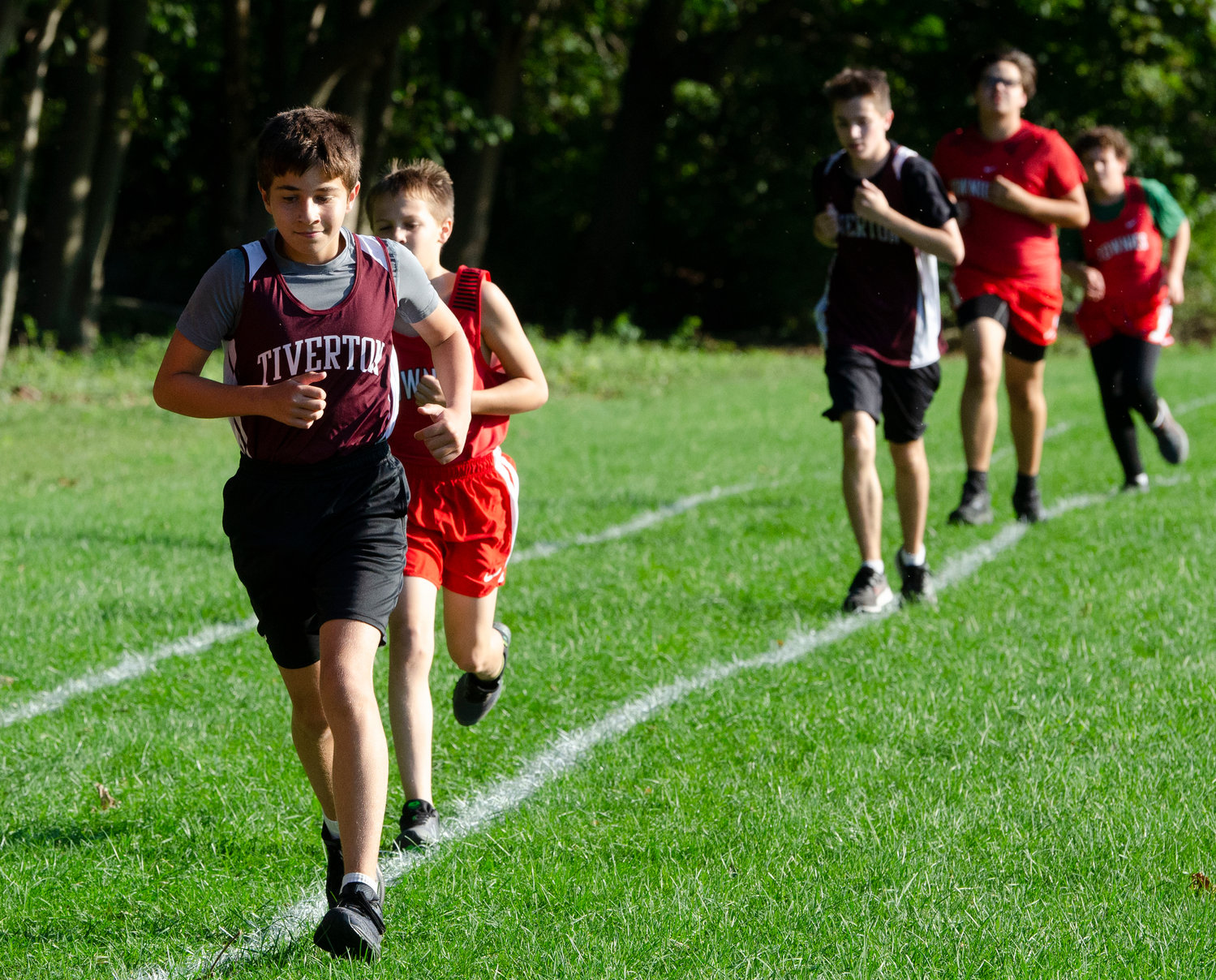 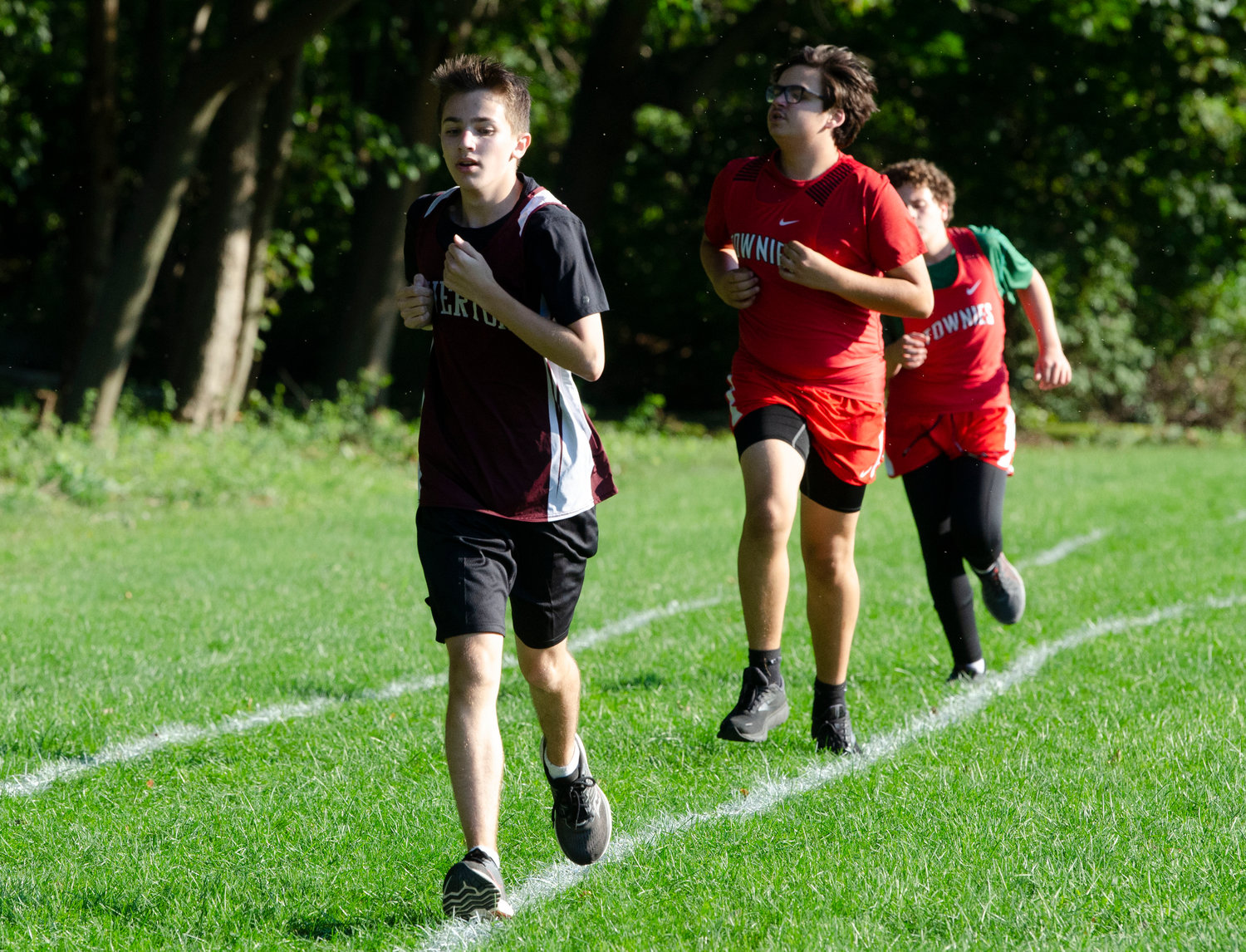 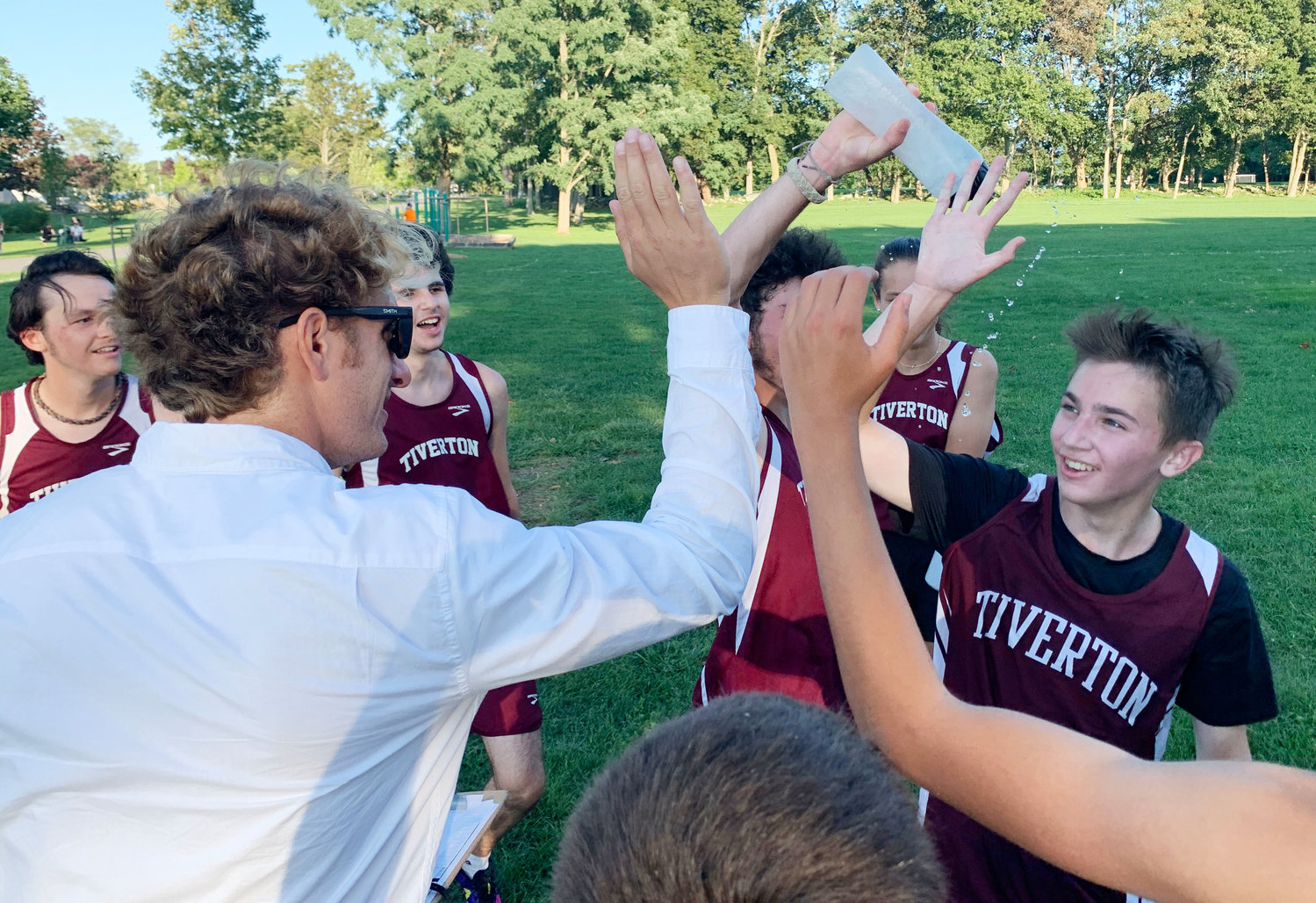 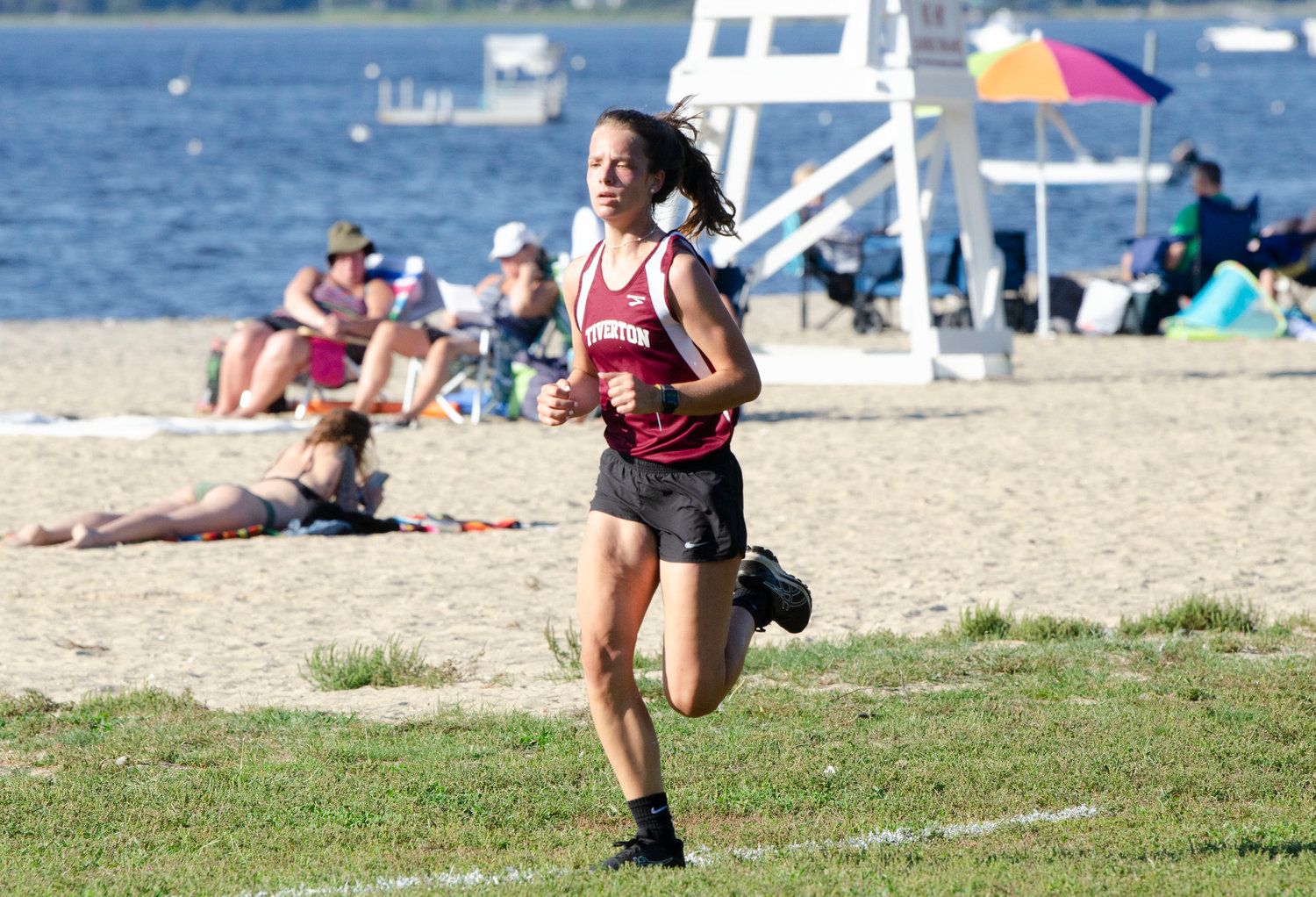 On the stat sheet, the Tiverton High School girls cross country teams lost a dual meet to Mt. Hope and Bay View Academy in Bristol on Monday, September 13th. That’s because freshman Ellery Pacheco is a team of one. The lone Tiverton runner actually did quite well, placing second with a time of 21 minutes and 44 seconds. Pacheco only loss to Lincoln School standout Mia Barrus who ran the 3.1  mile course in 21:18.

The competition was stiff for the freshman's first high school race, against  two private schools and Mt. Hope and East Providence High Schools. Pacheco upped her pace as she headed into the last lap through a grass field, across the Bristol Town Beach parking lot, down a grassy bank and along the beach. She beat 26 runners to the finish line.

“Ellery is a freshman with a ton of potential,” said Tigers cross country coach, John Digangi. “She trains hard every day and doesn’t hold back during races. She is not intimidated by anyone on race day. That may be because she is the only girl on the team and trains with the junior and senior boys.”

“Ellery was the top runner on the team as an eighth grader,” said Coach Digangi. “She ran a sub seven minute mile and won most races. I made sure to encourage her to join the high school team.”

“I said yes,” said Coach Digangi. “He gave me the roster and Ellery’s name was on the list.”

“I’m the only girl this year,” Pacheco said. “I just practice with the boys. It’s a little bit different than it was in the middle school, but it’s fun.”

Pacheco feels that it is a competitive advantage to practice with the boys team.

“The boys definitely push me,” said Pacheco. “They keep me on the team because, If not, I’d just be running alone. I wouldn’t have the same drive at practice.”

To the team’s credit, the boys have taken her in, as one of their own.

“They all run together. They joke and have fun, each day,” Coach Digangi said.

“She is exceeding my expectations,” said Coach Digangi. “If all goes well and she keeps training hard, sleeping well and eating right, she has the potential to make it to the state meet. To go to the state meet as a freshman, that alone is very impressive. I’m excited to see what she can do.”

The Tigers lost to Mt. Hope High School in their first cross country meet of the season, in Bristol on Monday, 9/13. Ryan Souza was the first Tiger to cross the finish line during the boys meet, with a time of 21 minutes and 18 seconds, good enough for seventh place.

“Ryan Souza is our team captain,” said Coach Digangi. “He is a multi sport athlete and is coming off of a serious knee injury. Ryan is hungry for greatness and encourages his teammates to keep working hard, cheering them on during workouts and races. I’m excited to watch him compete each and ever race.”

Nicholas Mercer placed eighth for the Tigers with a time of 21:28,

“Nicholas has never missed a practice and has the best work ethic on the team,” said Coach Digangi. “He is also a multi-sport athlete, competing in baseball when he is not running. He brings a light hearted personality to the team, gaining laughs from his teammates in between reps. It’s fun to watch him compete.”

“The team as a whole is doing great,” Coach Digangi said. “I am a new coach for them, so I wasn’t sure how they were going to react to my training style. They come to practice every day, they do as they’re told, and most importantly they have a positive attitude at all times. They have exceeded my expectations.”