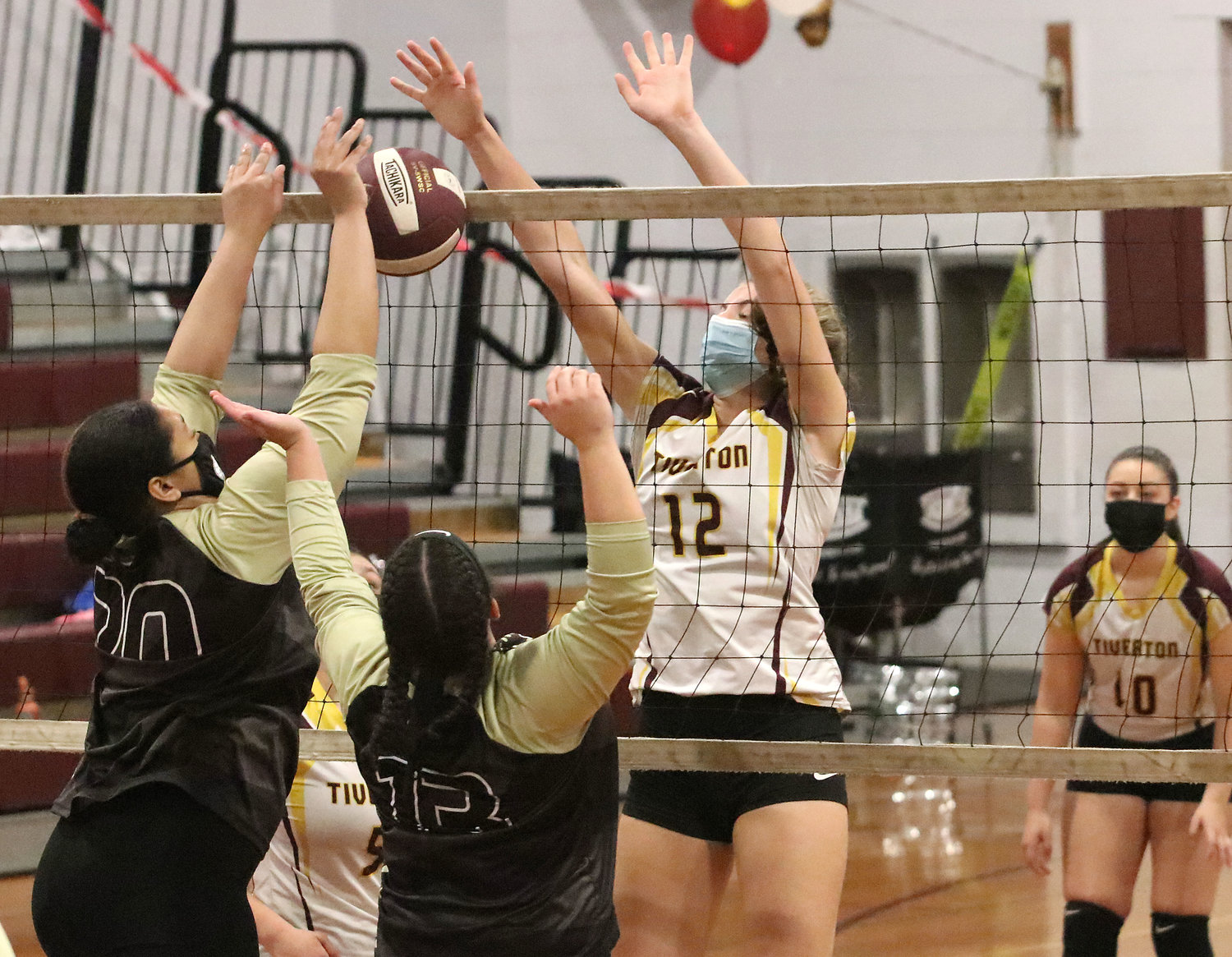 Junior Molly Richardson blocks the ball back onto the Davies side of the net for a Tiverton point. Senior Savannah Goss looks on (right).
Richard W. Dionne, Jr. 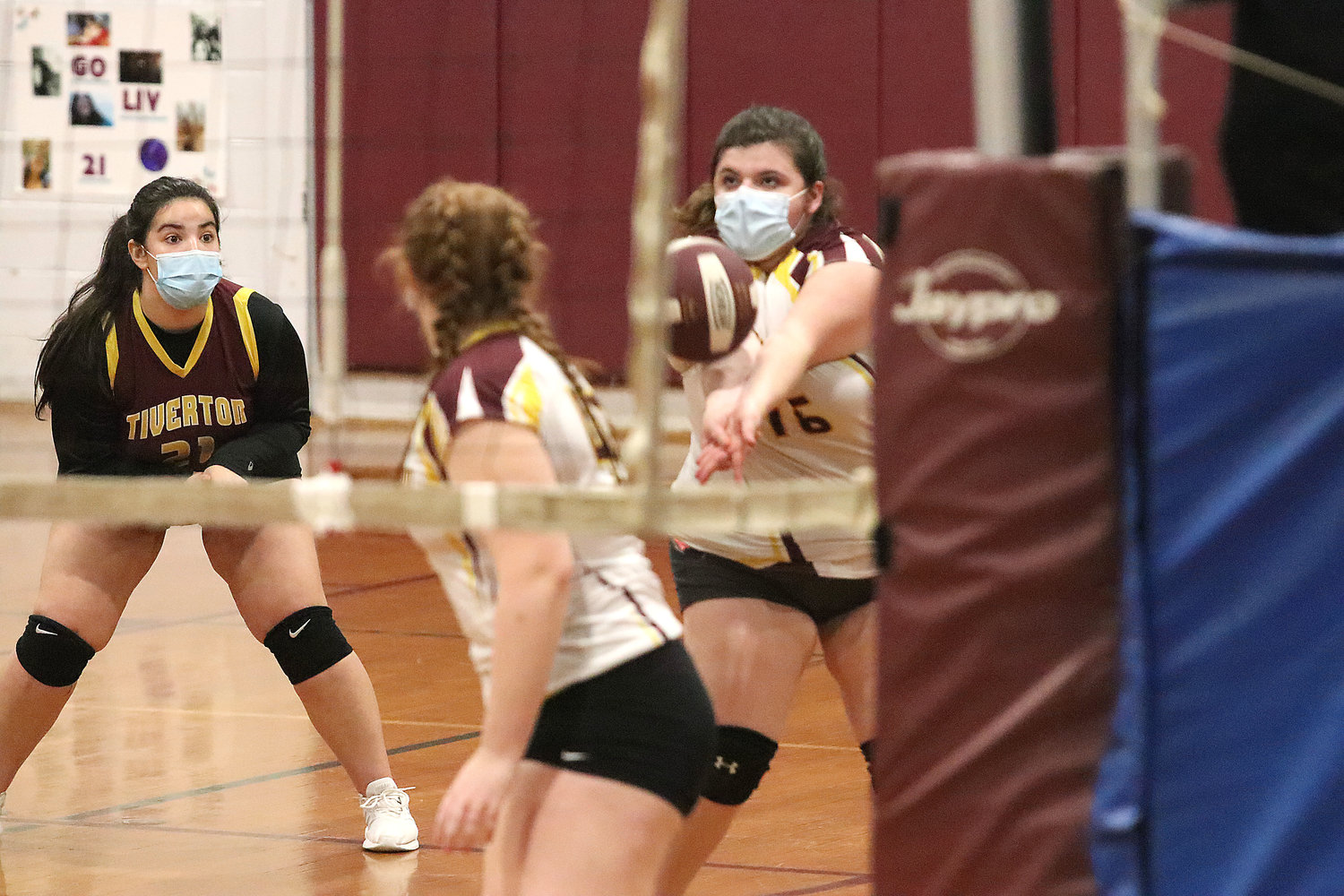 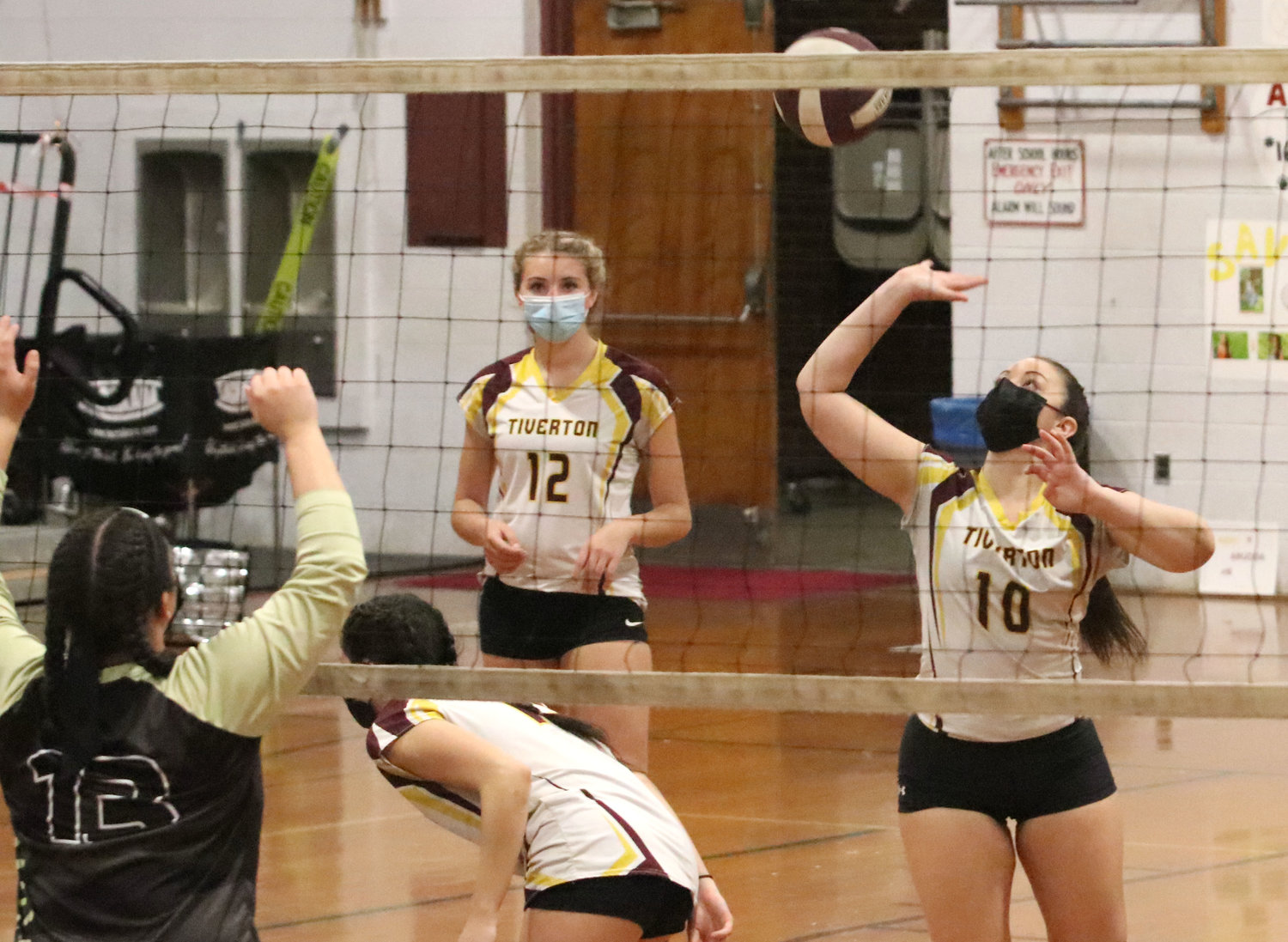 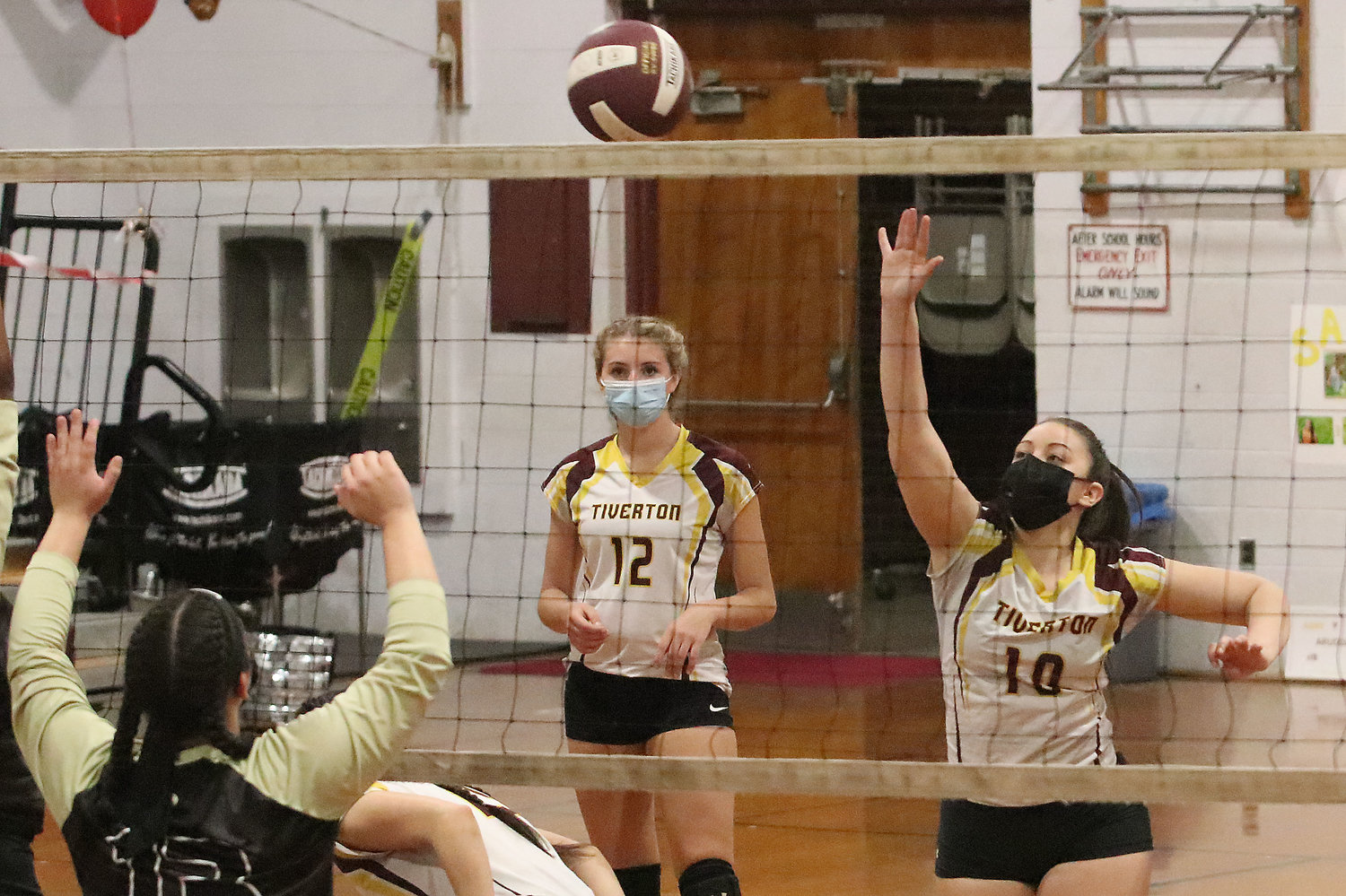 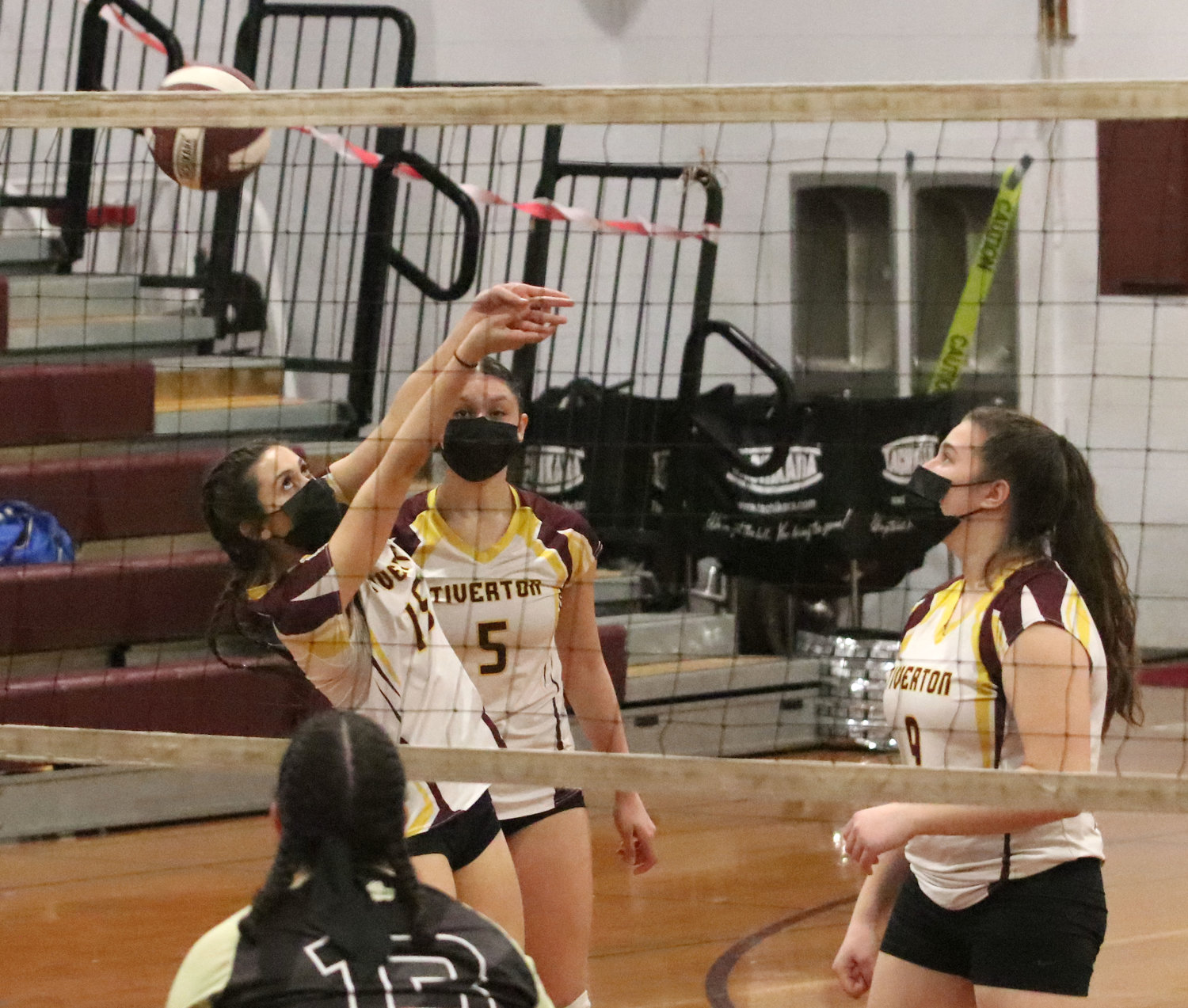 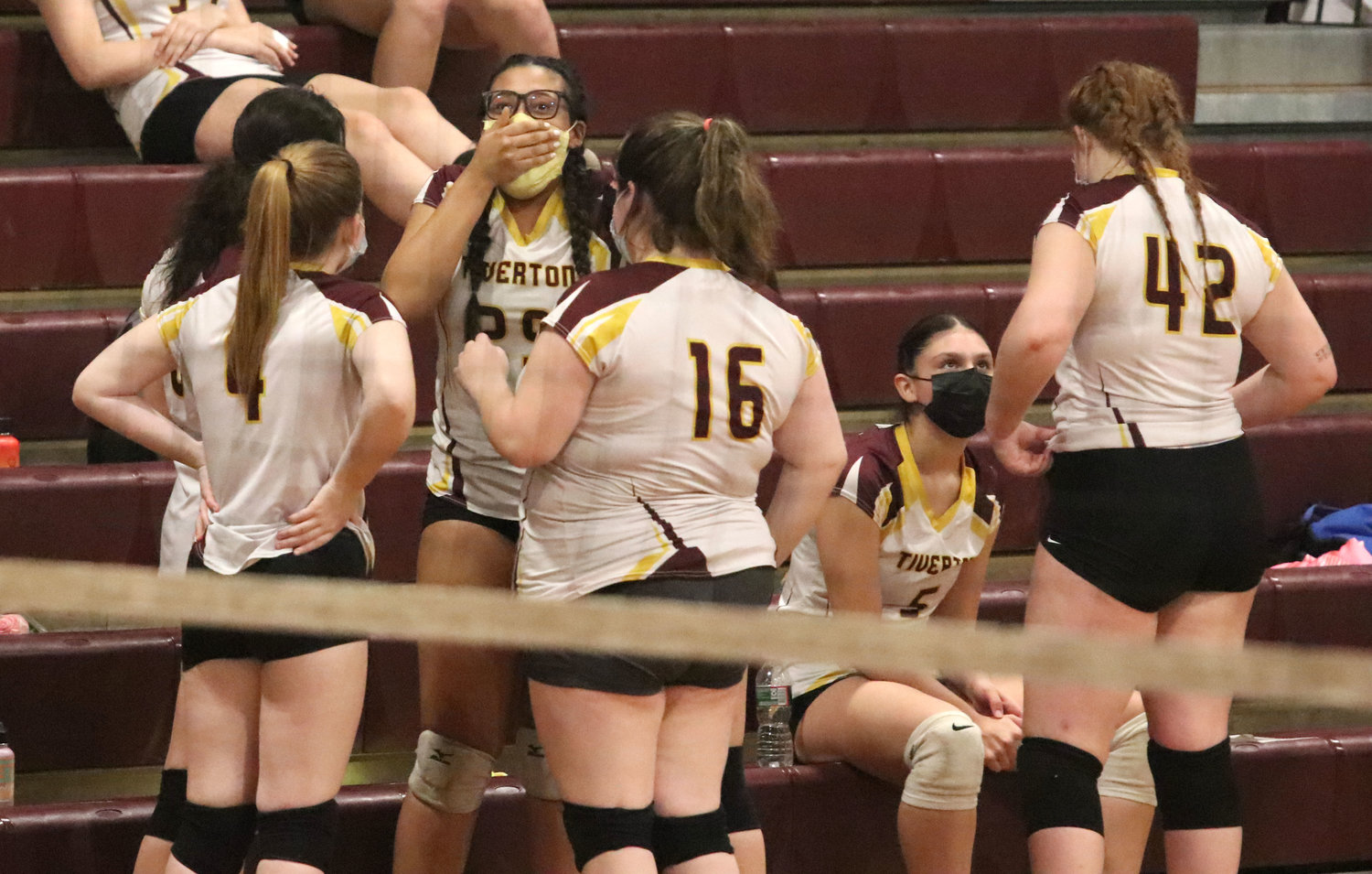 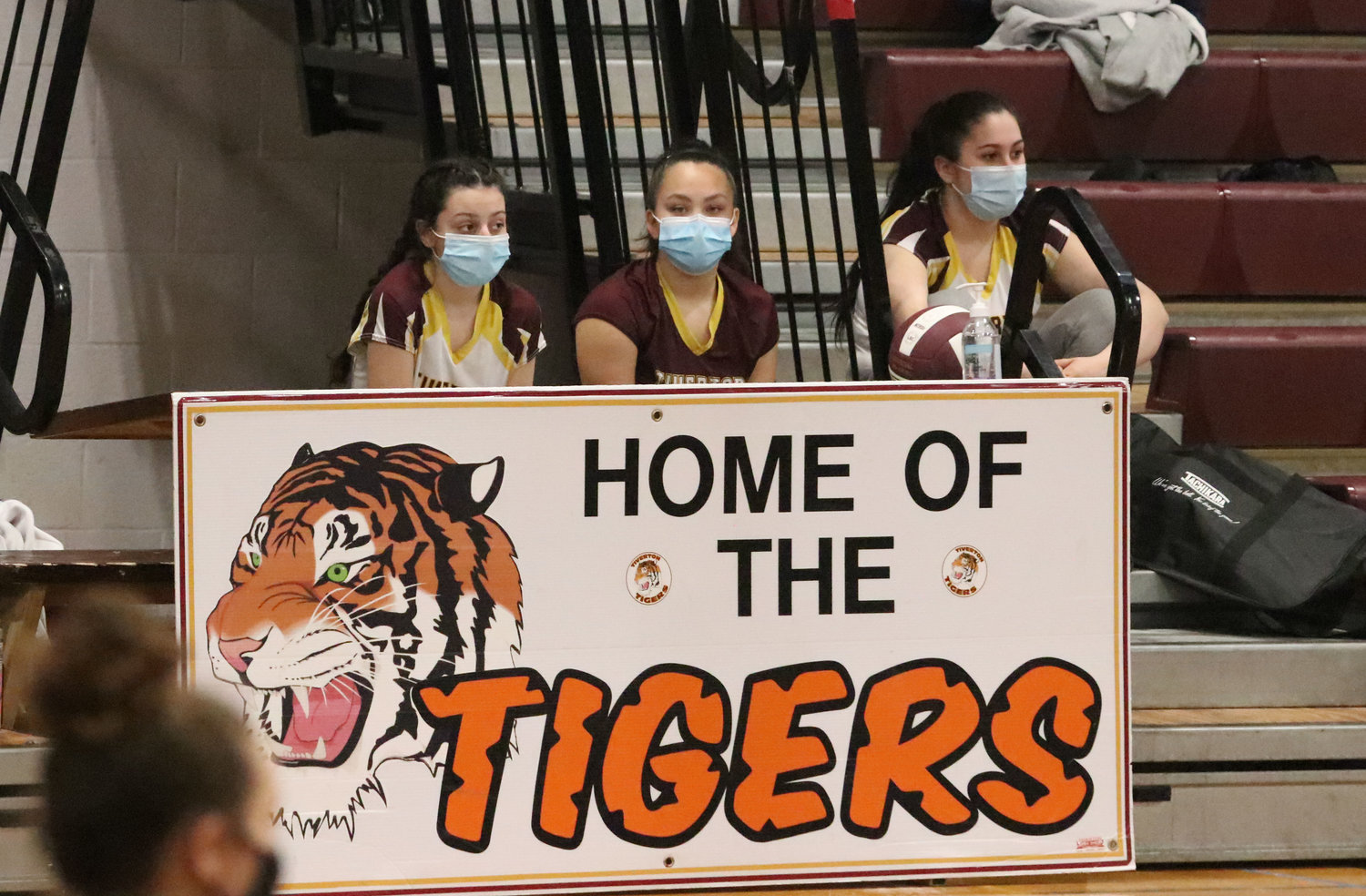 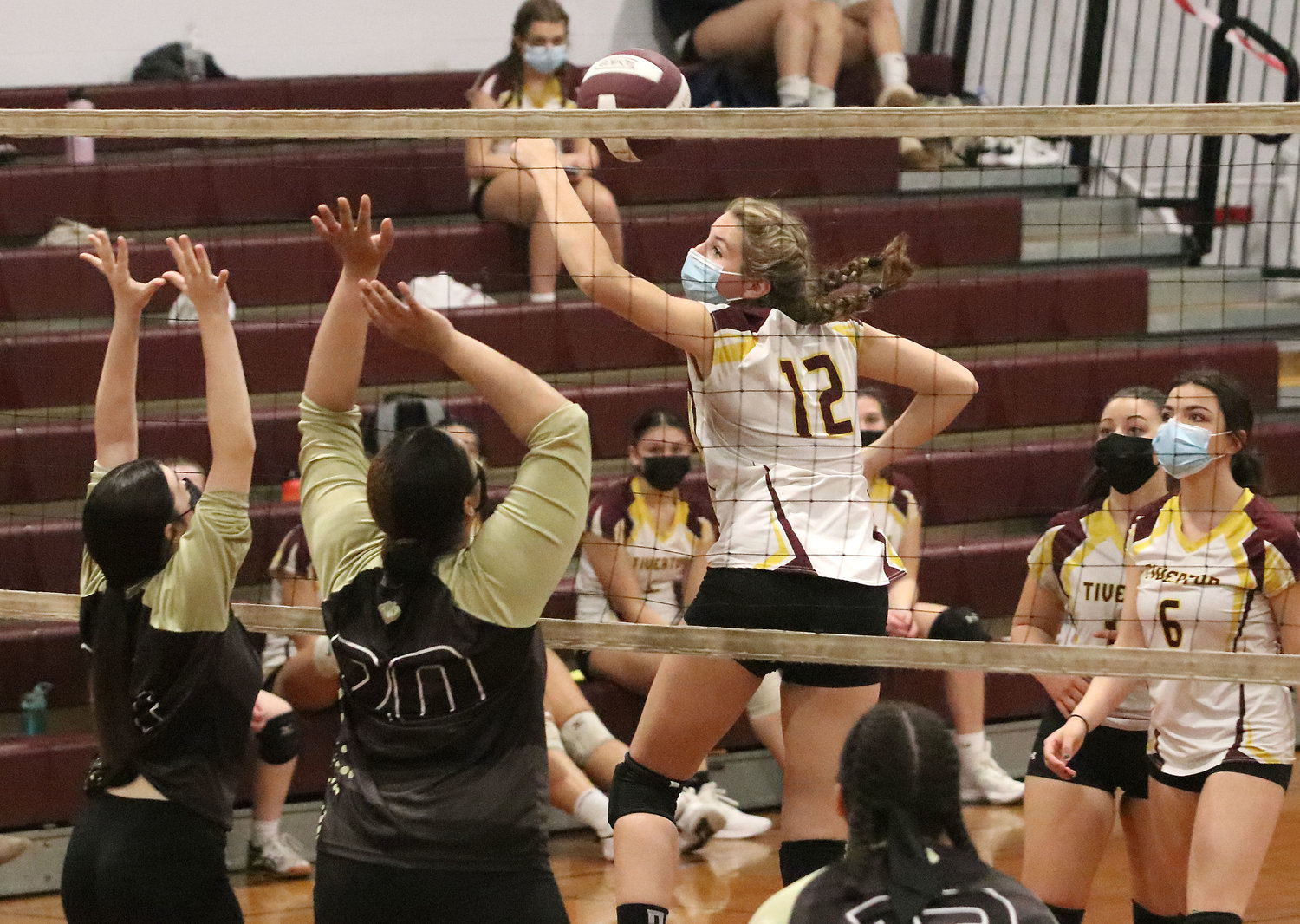 Molly Richardson belts a backhand back over the net, with teammates Abbie Monkevicz and Gabby Piscani (right) looking on.
Richard W. Dionne, Jr. 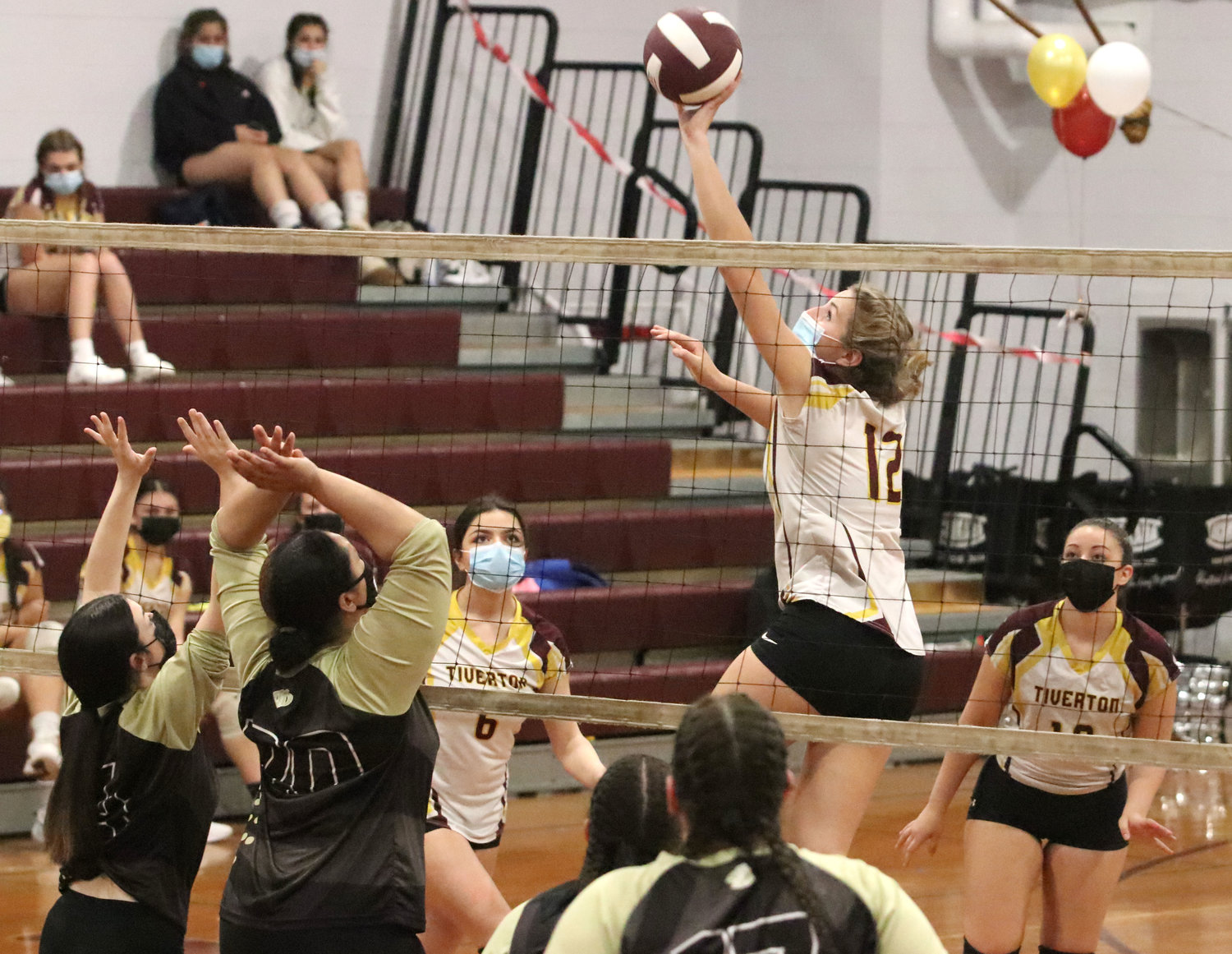 Molly Richardson reaches high over the net to bat the ball over for a winner. Teammates Gabby Piscani (left) and Savannah Goss look on.
Richard W. Dionne, Jr. 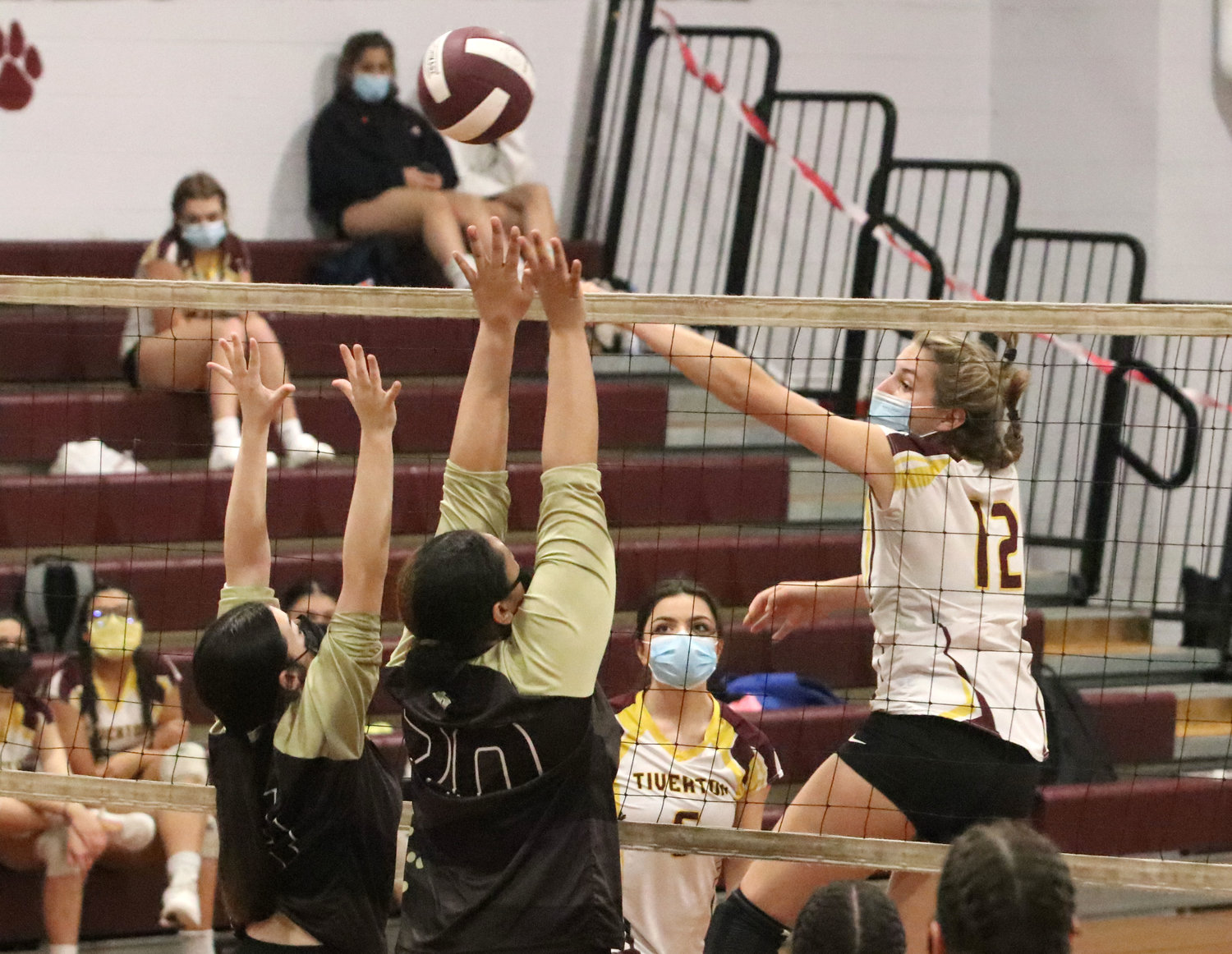 Molly Richardson reaches high over the net to bat the ball over for a winner. Teammates Gabby Piscani looks on.
Richard W. Dionne, Jr. 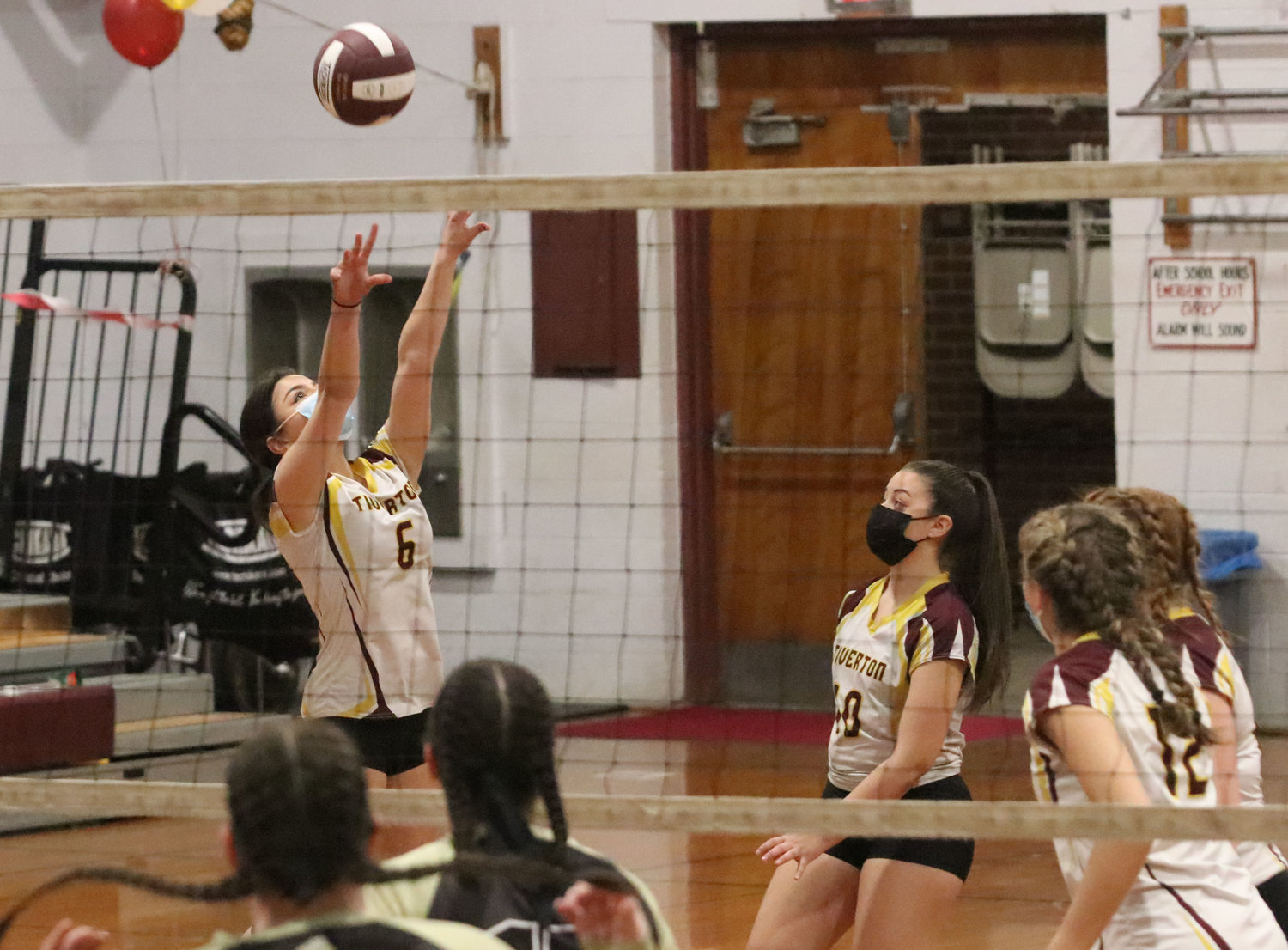 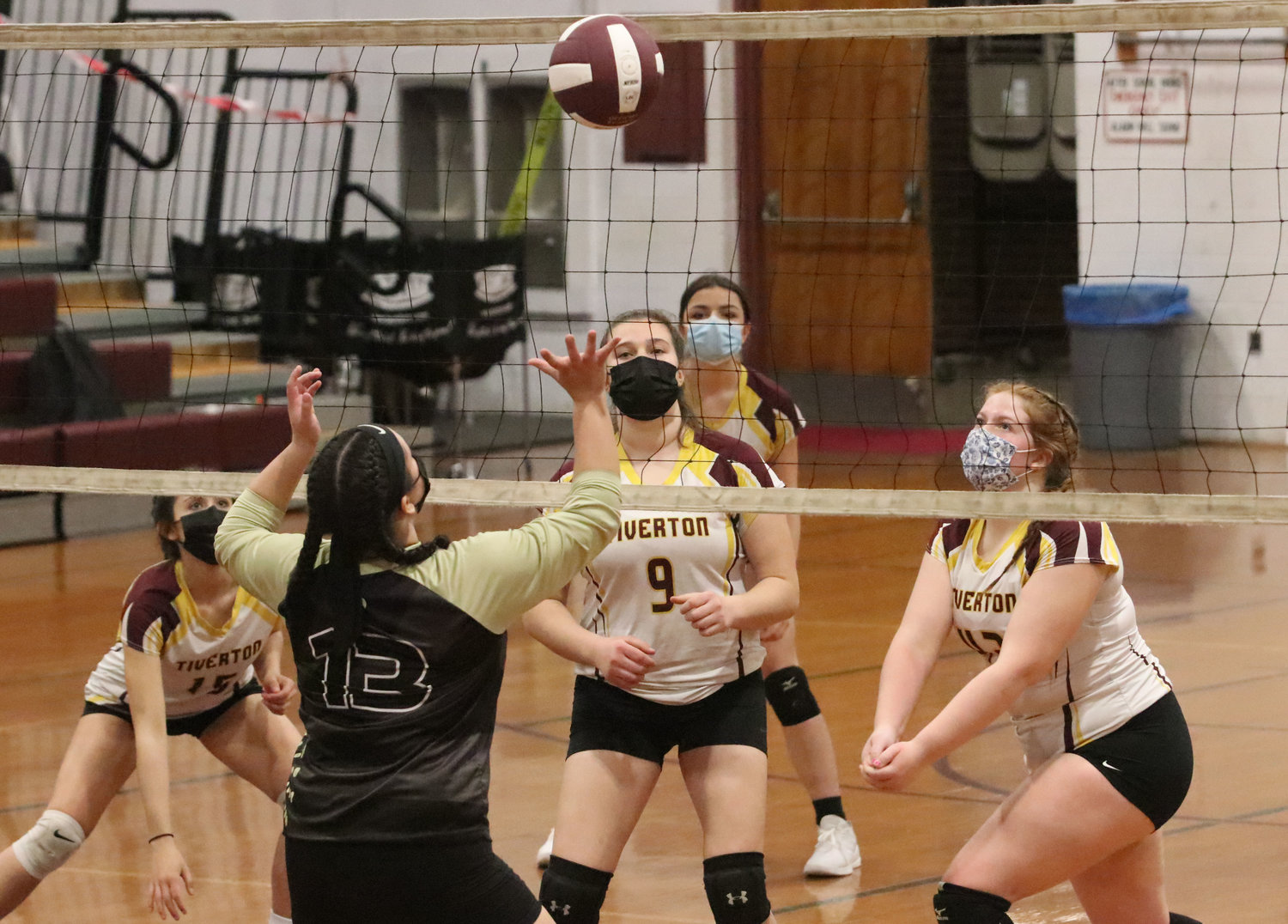 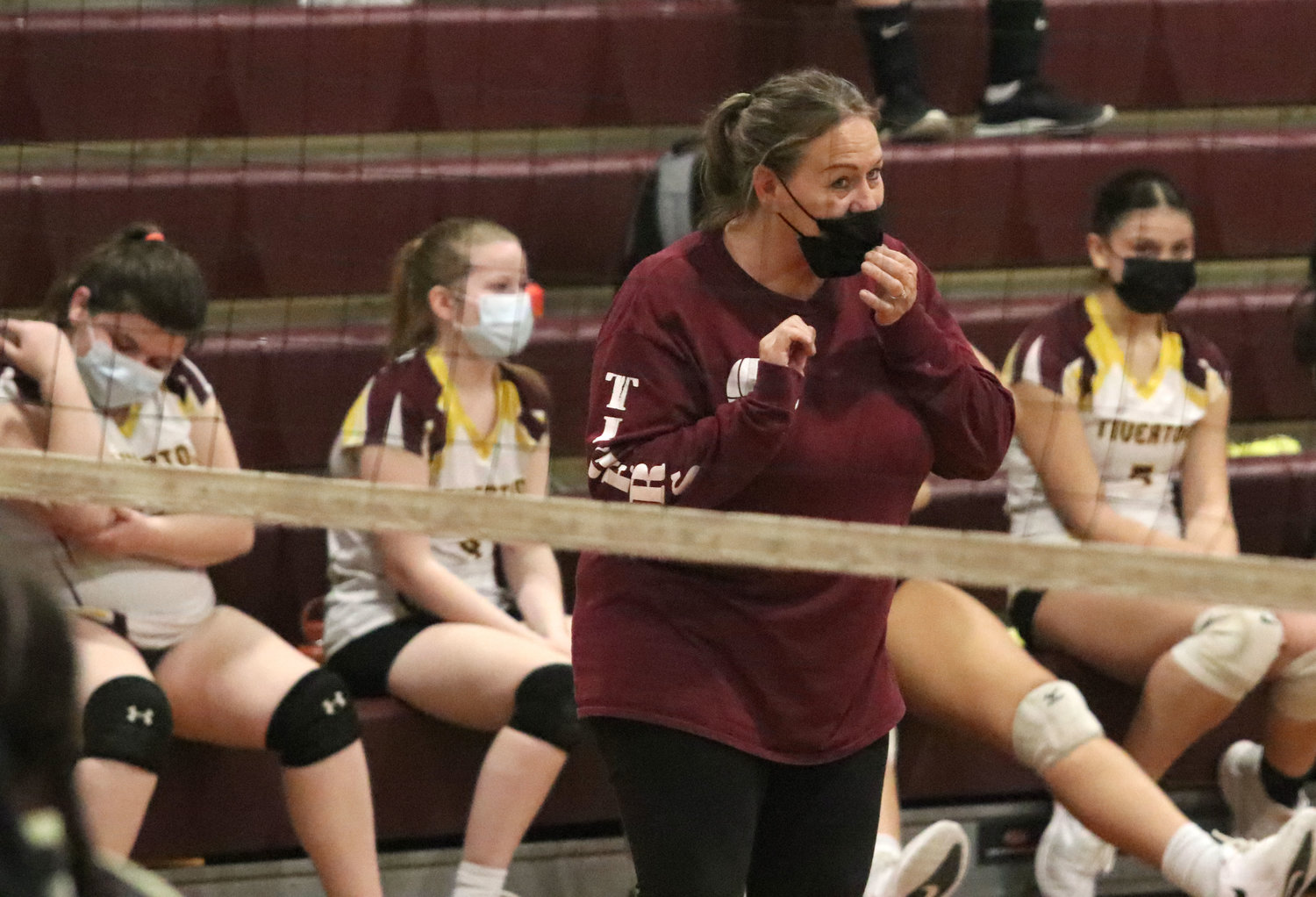 Head coach Kerri Allder speaks to the front line during a pause in the game.
Richard W. Dionne, Jr. 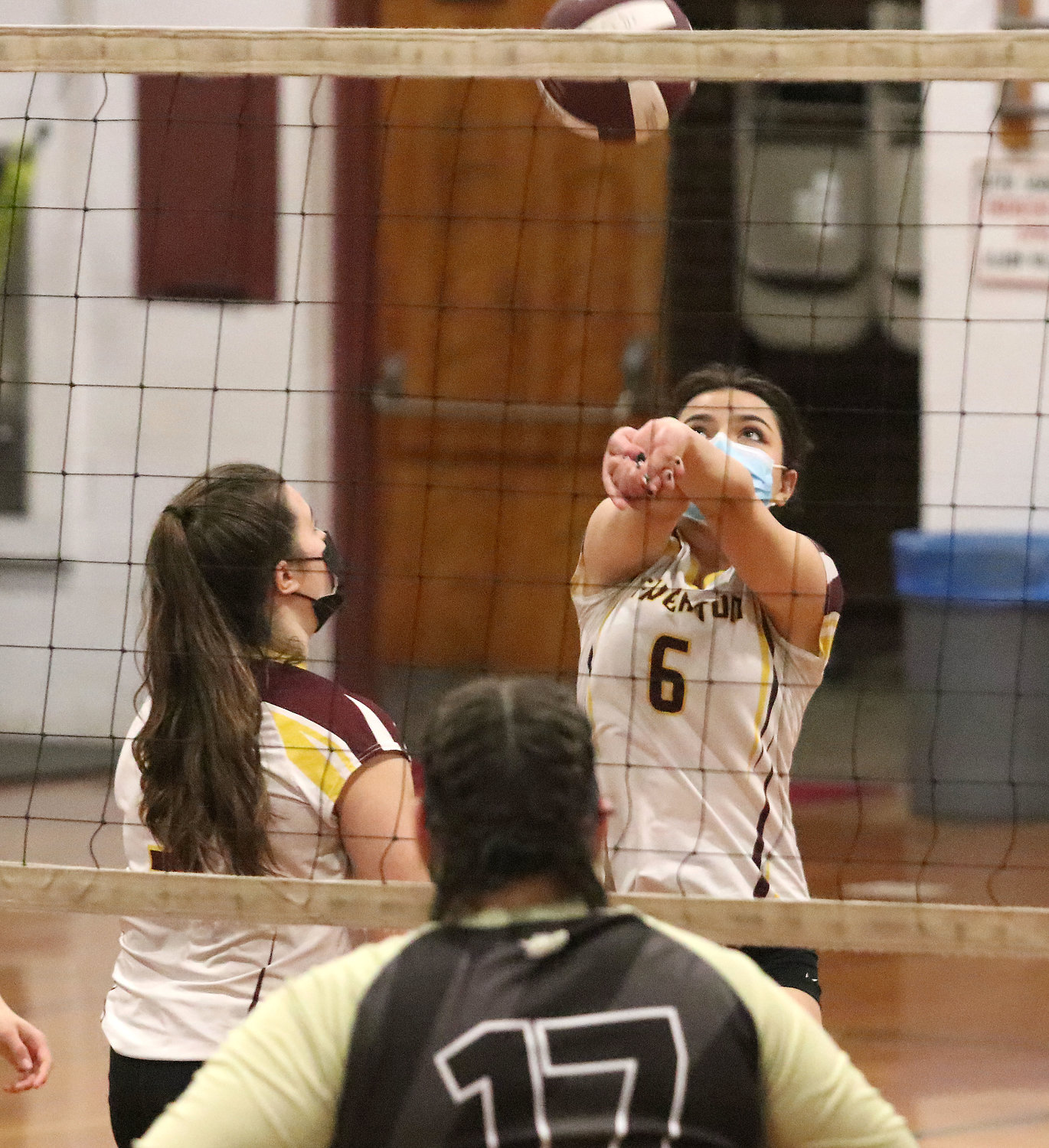 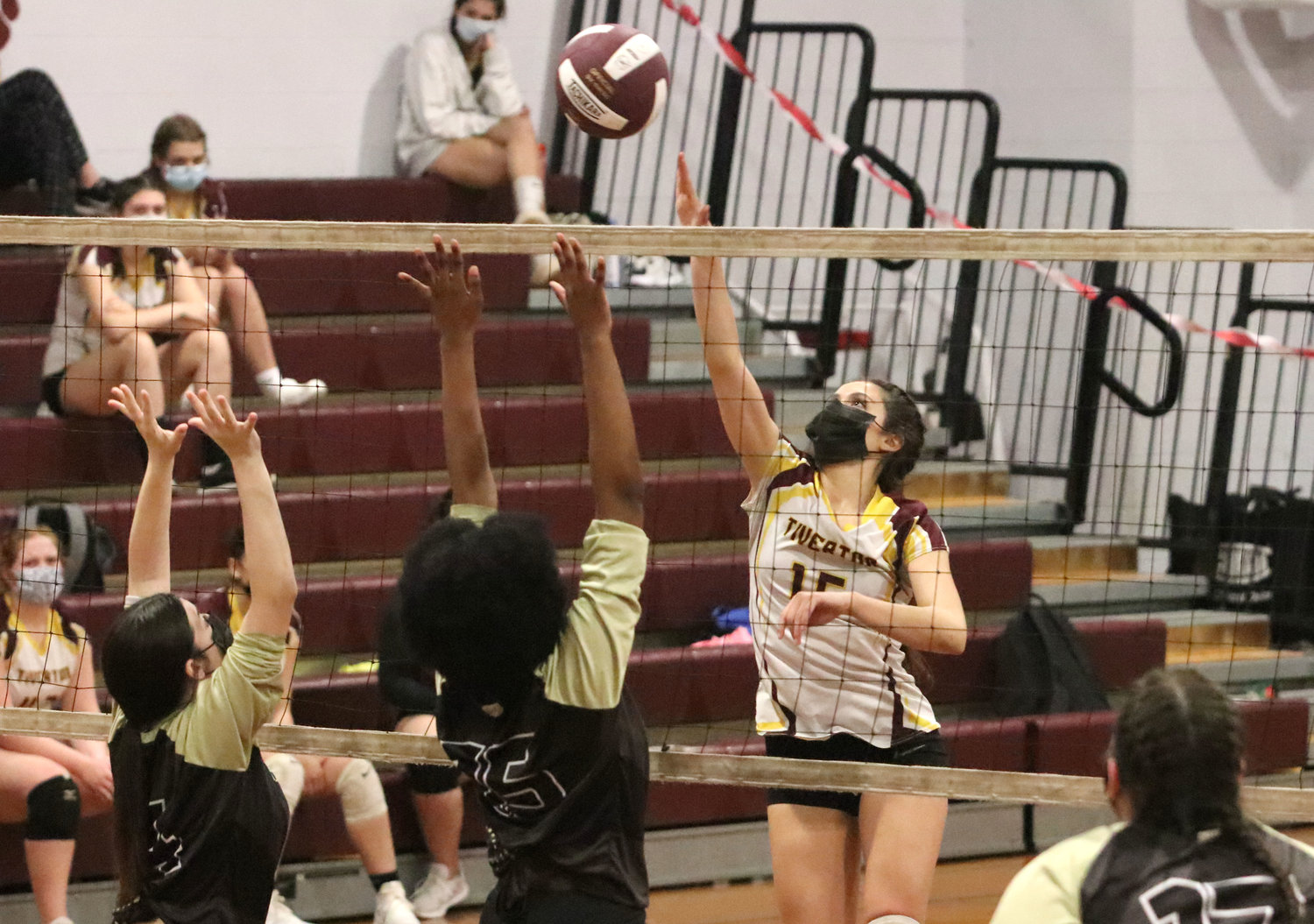 Kaylie Cabral hits the ball over the hands of the Davies blockers for a winner.
Richard W. Dionne, Jr. 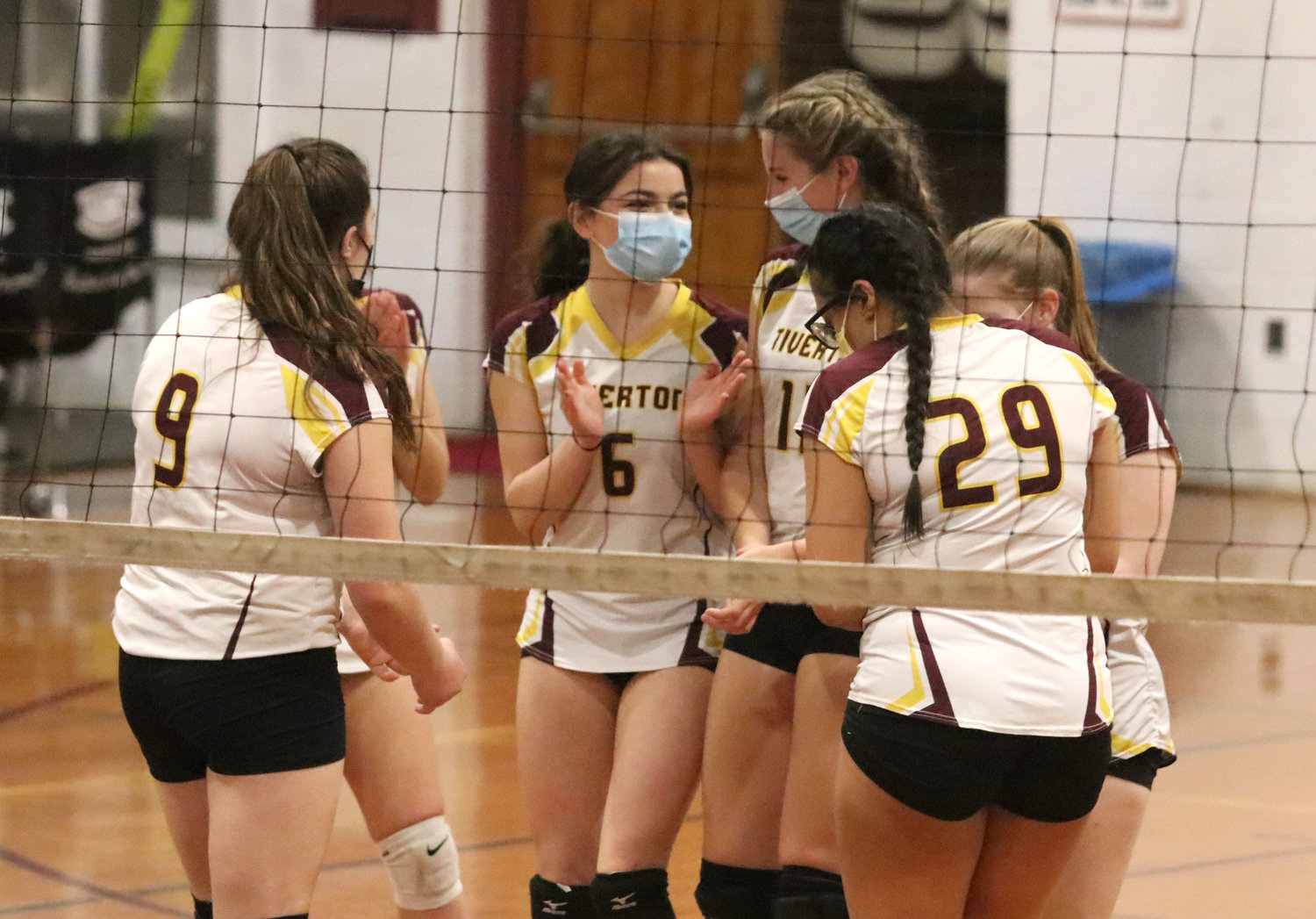 The Tigers celebrate after a Molly Richardson spike from the second row.
Richard W. Dionne, Jr. 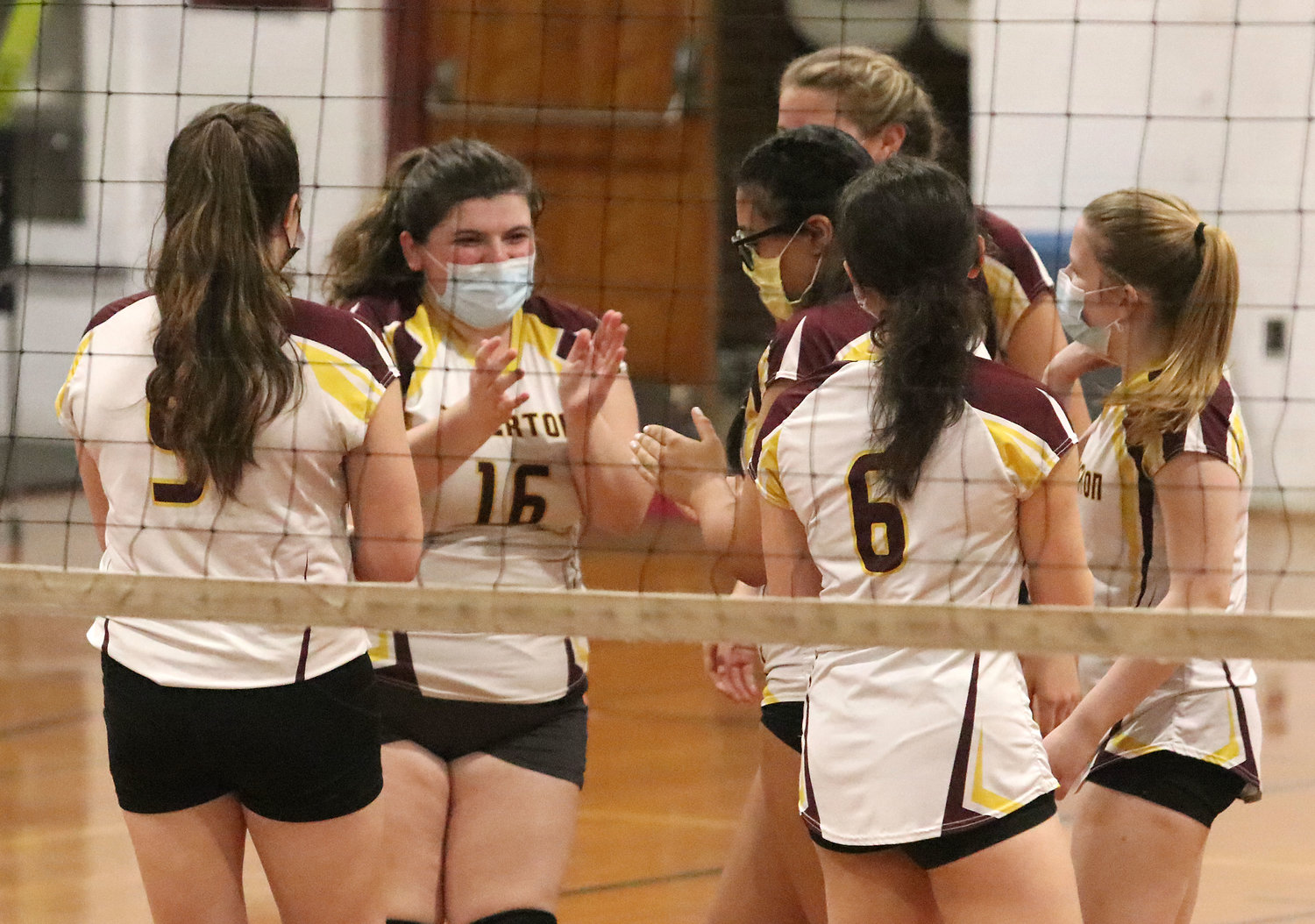 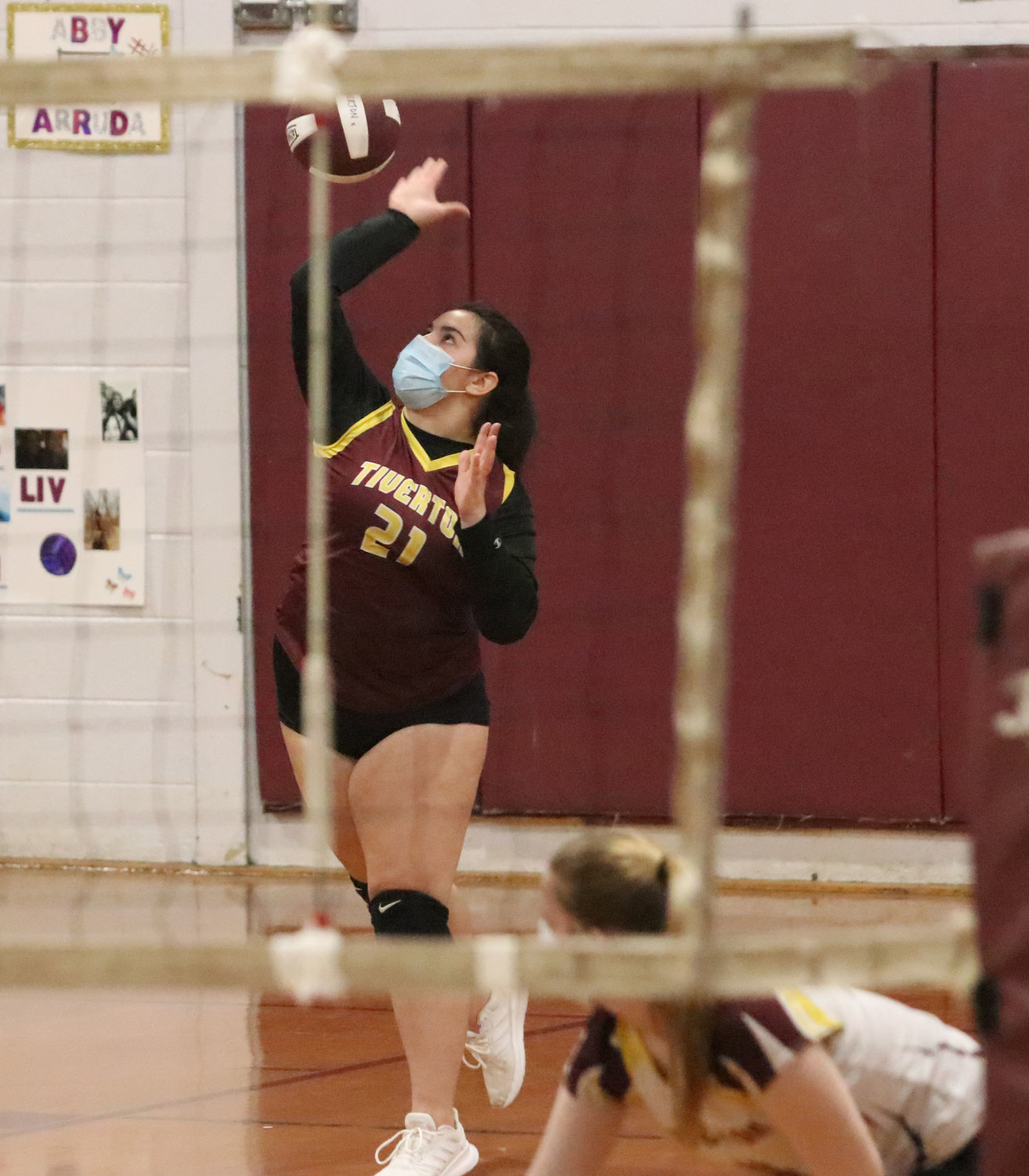 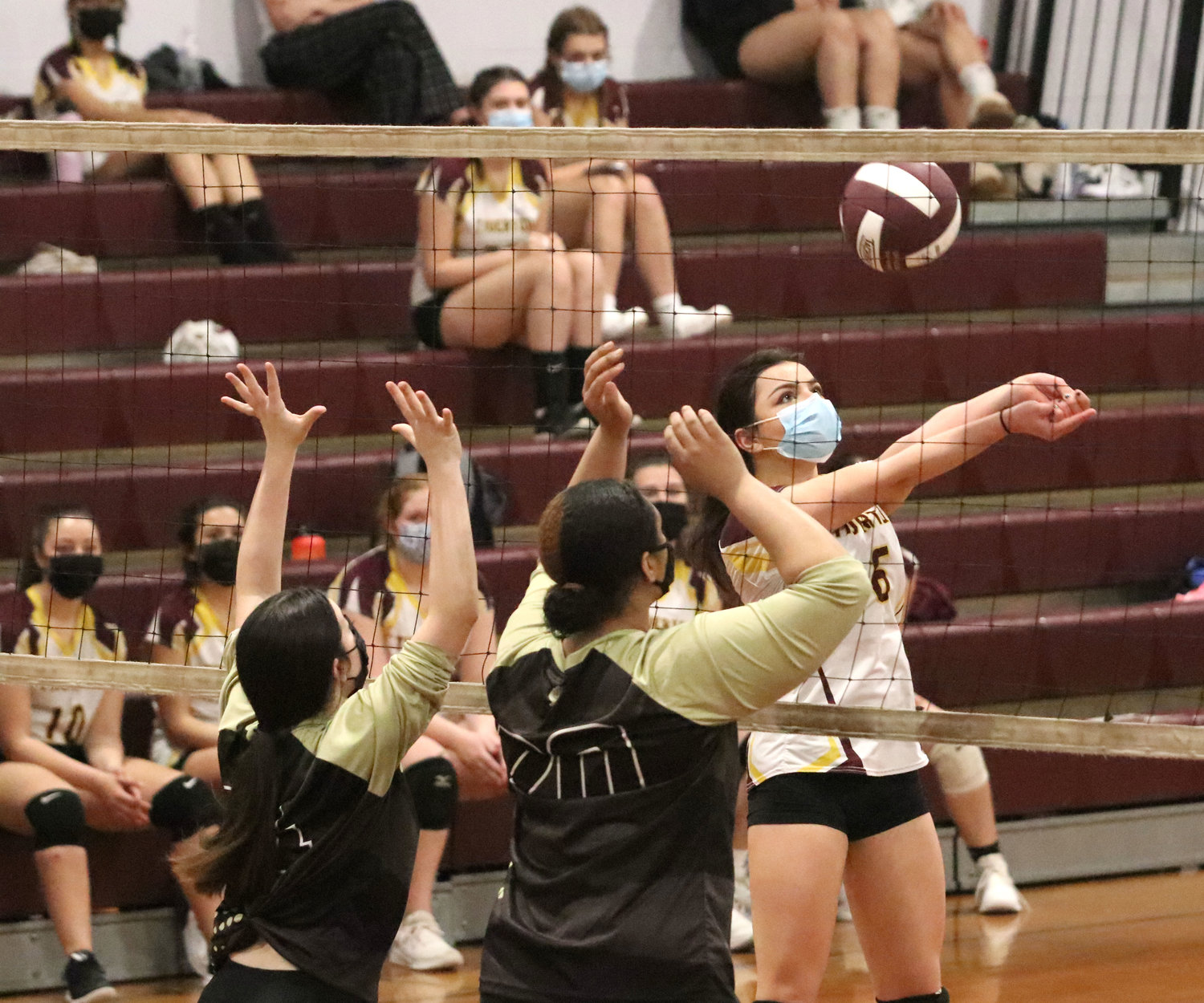 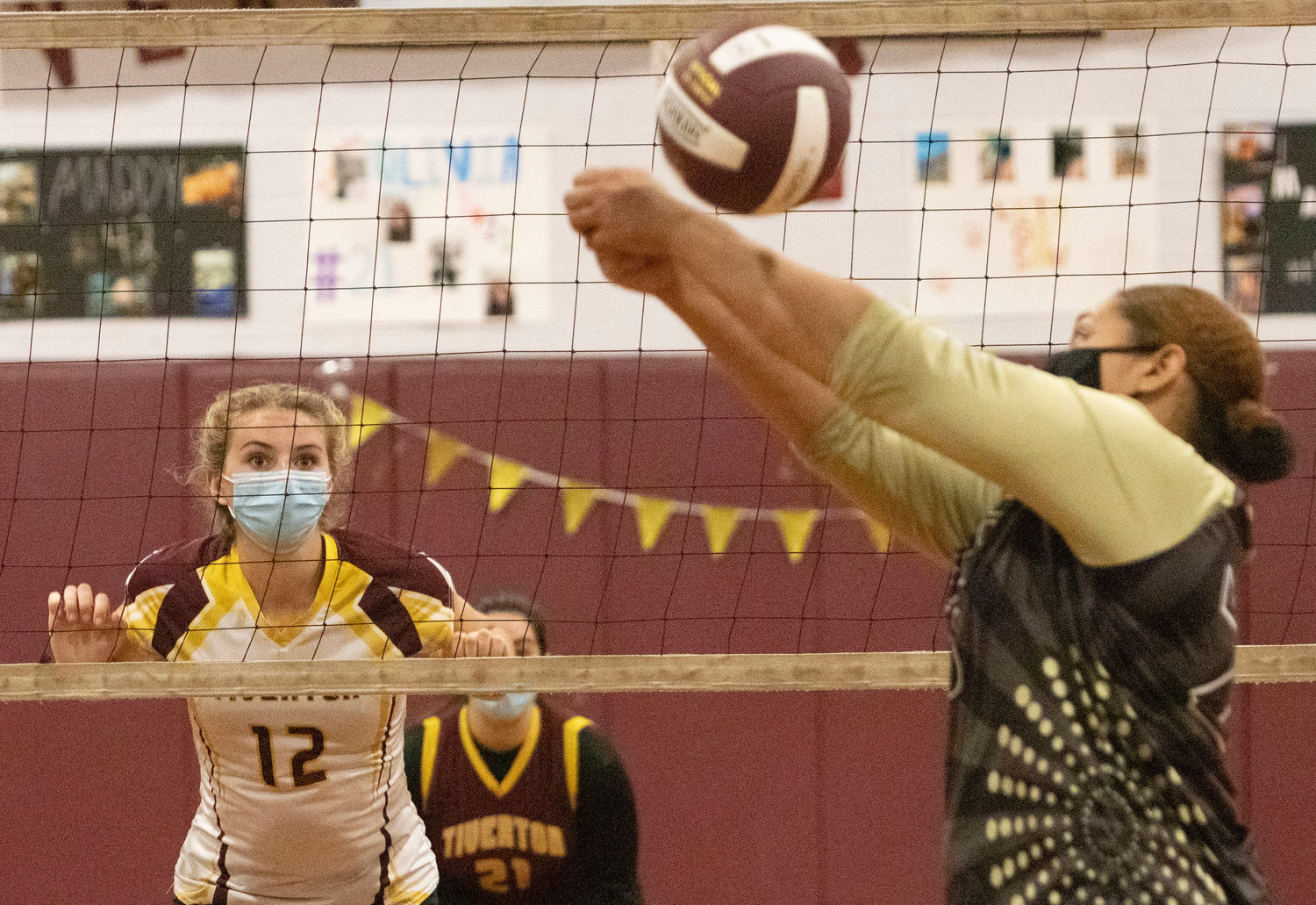 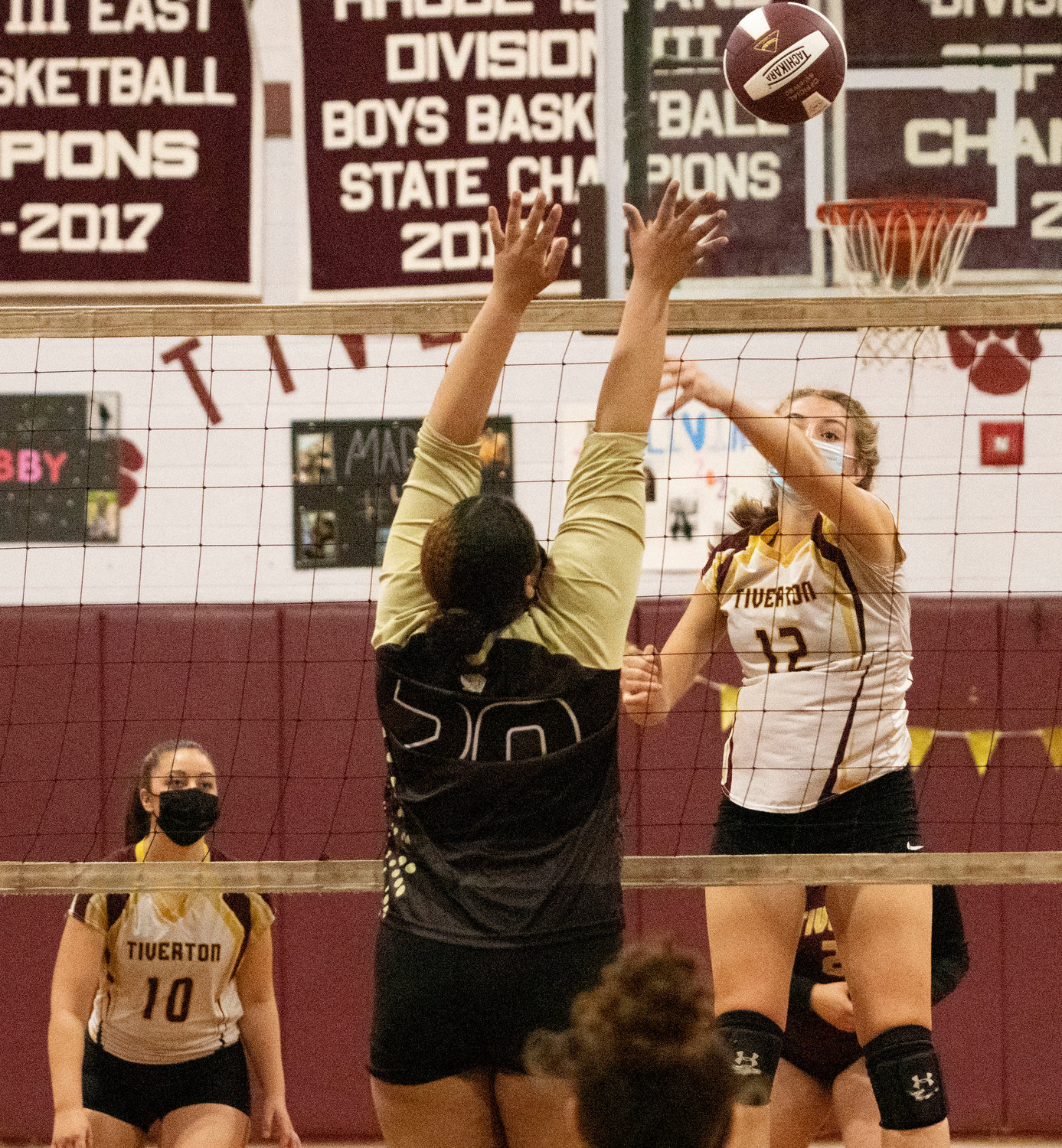 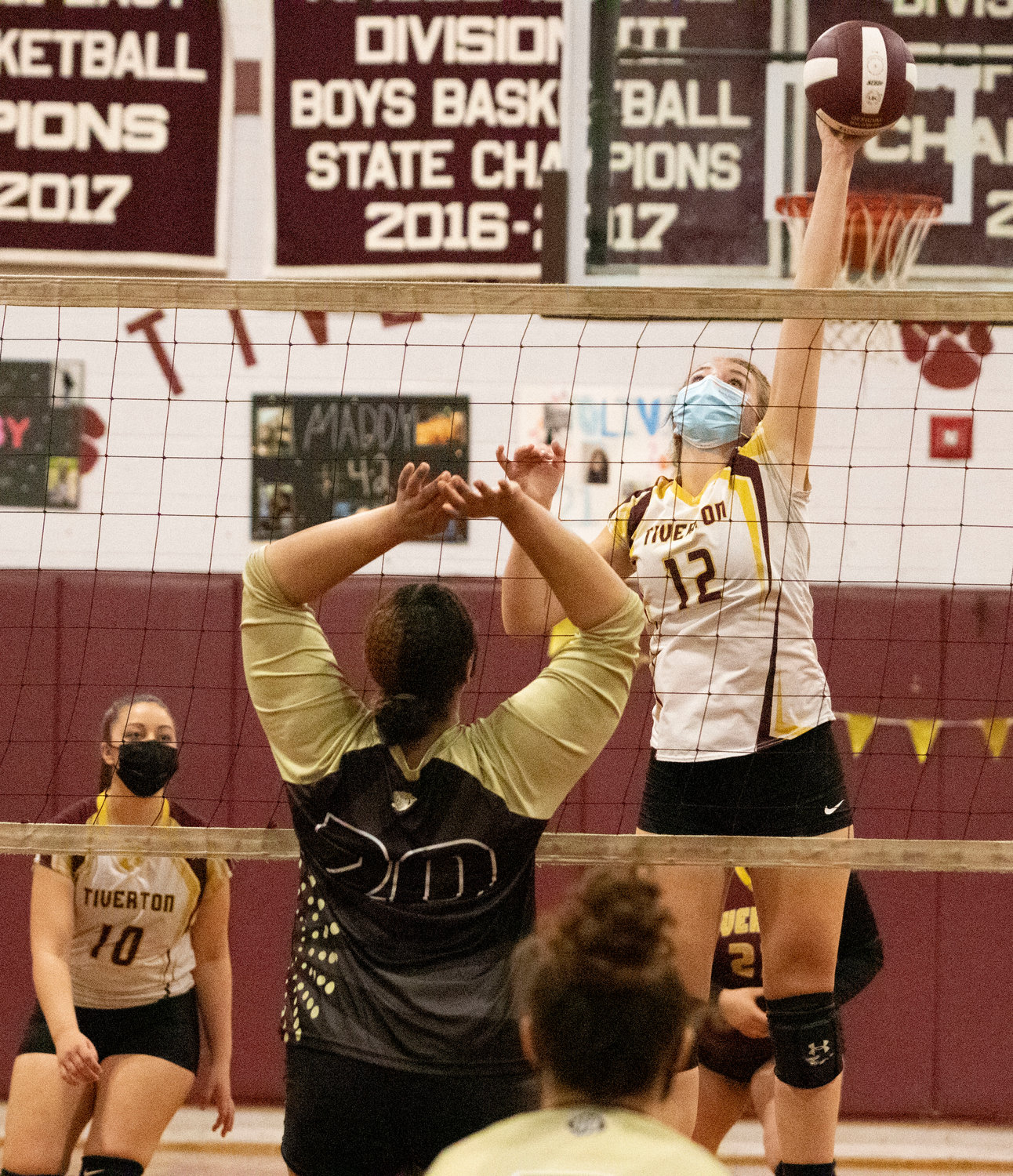 The Tiverton girls volleyball team skunked Davies, 3-0 (25-14, 25-18, 25-4) during a Division IV home match on Tuesday night. The Tigers are currently in third place with a 6-2 record. Junior middle hitter, Molly Richardson, led the team with 6 kills and 6 aces. But it was the seniors that came up big for the Tigers on senior day.

“I had all the seniors start and play the whole match,” said Tiverton head coach Kerri Allder. “It was a bittersweet night. They’ve worked hard at practice, learning a new rotation for tonight and they played very well together.”

Senior Savannah Goss smashed 10 aces. The four year player began her Tiverton volleyball career learning the game at the junior varsity level. She broke into the varsity her junior season, according to Coach Allder. “Savannah is dedicated and a hard worker,” said Coach Allder. “Her defensive skills have improved and her serve has become consistent and stronger.”

“Maddy just recently moved from middle hitter to outside hitter,” said Coach Allder. “She is much more effective at the outside position and is comfortable playing there. Maddie has been putting in the time at practice to improve her defense to go along with her strong and consistent serve.”

Senior Abby Arruda recorded 2 aces during the game. “Abby works so hard and has a great attitude,” said Coach Allder. “She really enjoys playing volleyball and always gives 100 percent effort. She never gives up on the ball.”

Senior Olivia DeMacedo also pitched in with 2 aces and 3 digs.

“They played for each other and they all played with heart,” said Coach Allder. “It was nice to see them playing with focus and also having fun.”

The Tigers will clinch the third seed if they can beat Hope on Thursday night. That scenario would give the Tigers a home quarterfinals match against the sixth seed on either Monday April 26 or Tuesday the 27th. Currently, Providence Country Day is in first place in D-IV, with a record of 9-0 and Woonsocket is in second place at 7-1.