The win improved the … 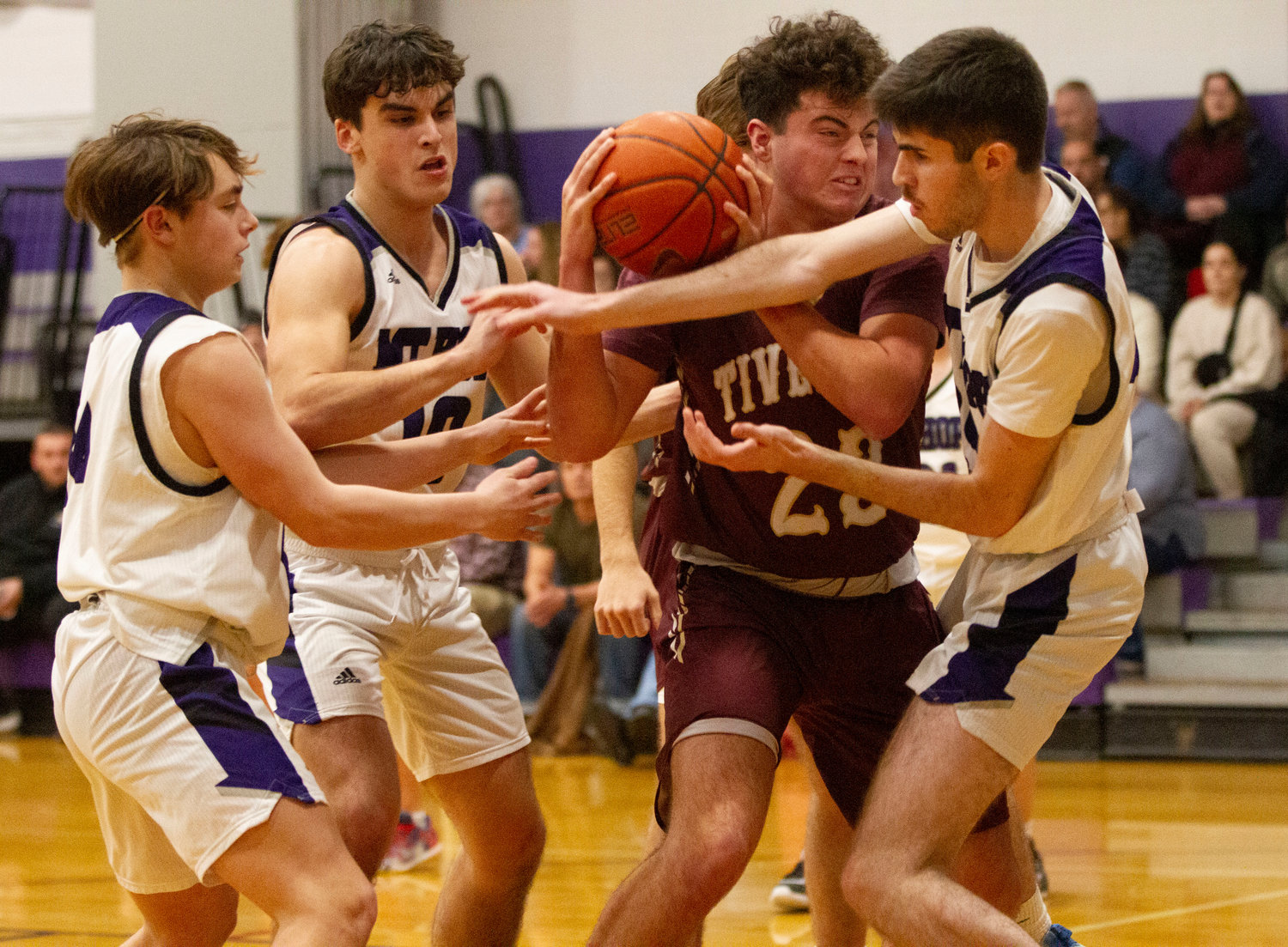 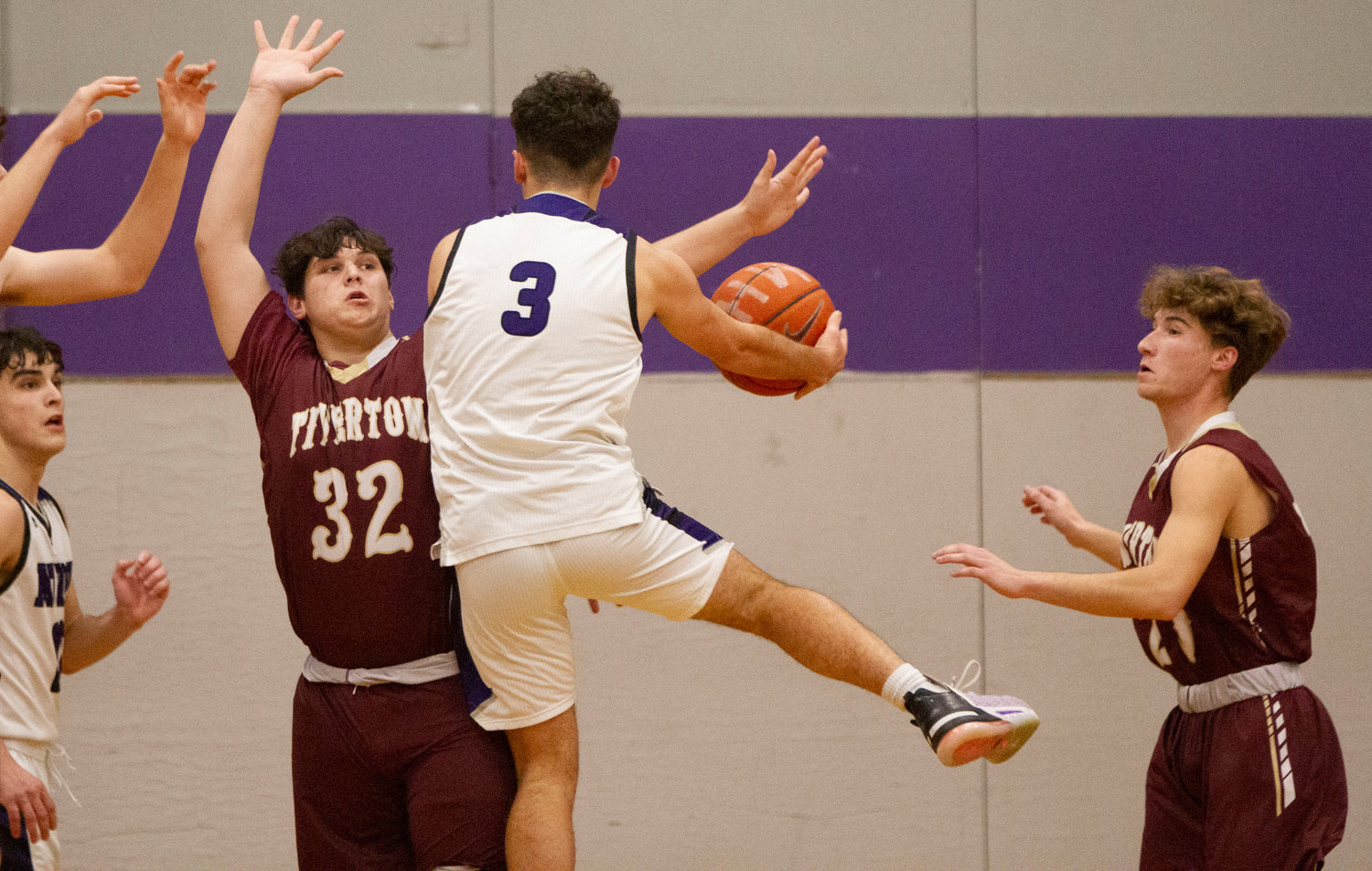 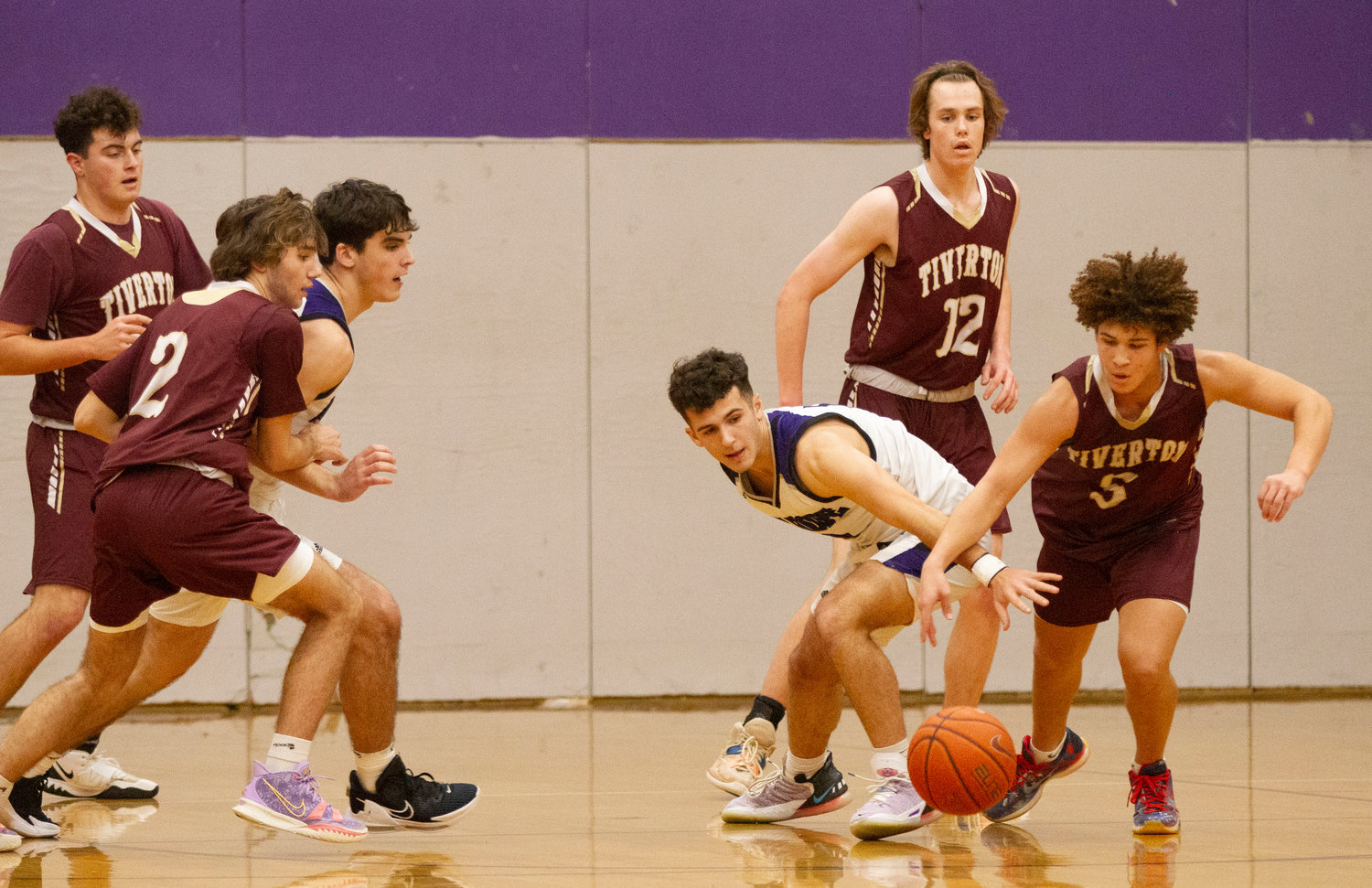 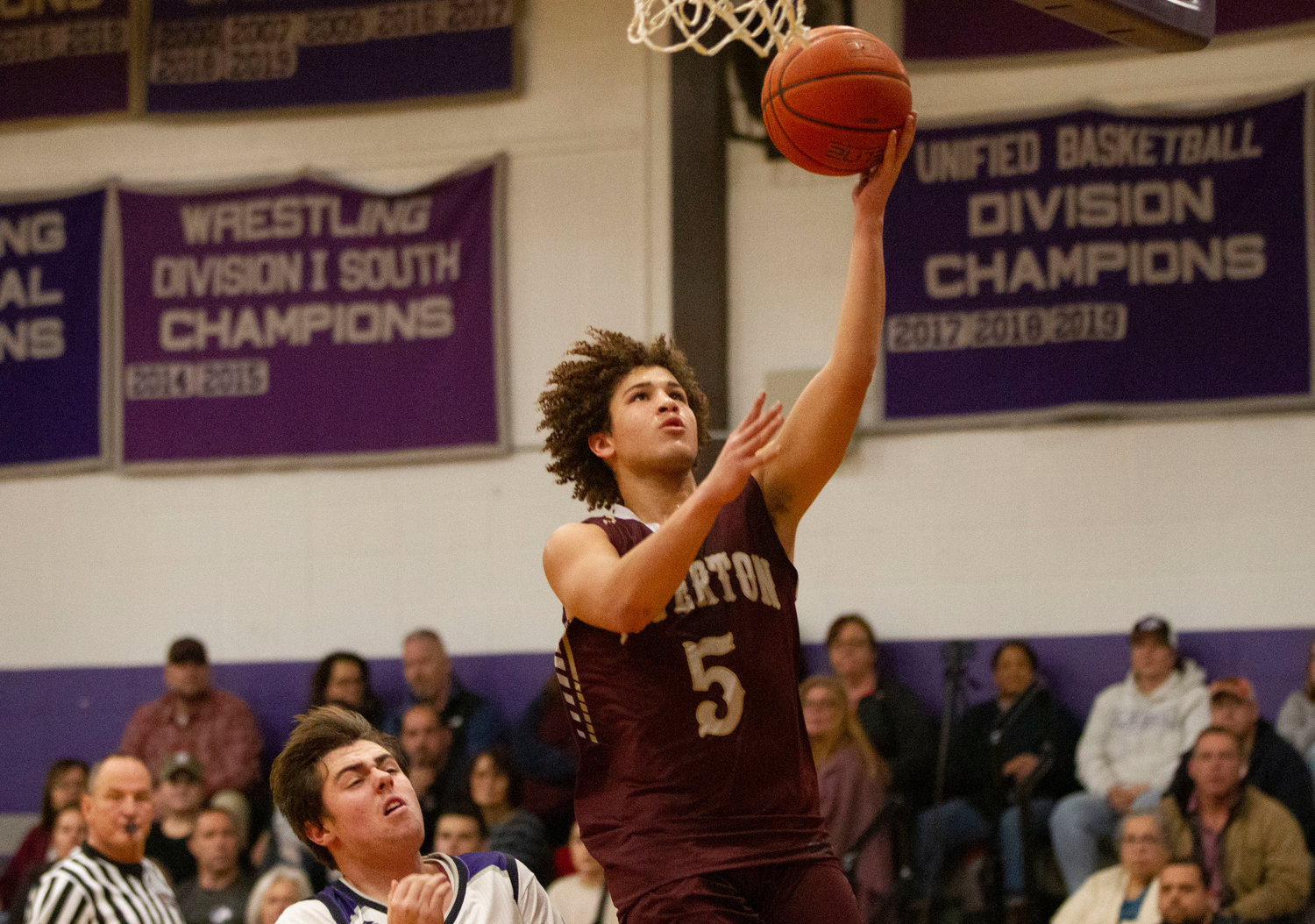 The Tigers’ Tristin White beats the Huskies down the court for a layup on a Tiverton fast break.
RICHARD W. DIONNE, JR. 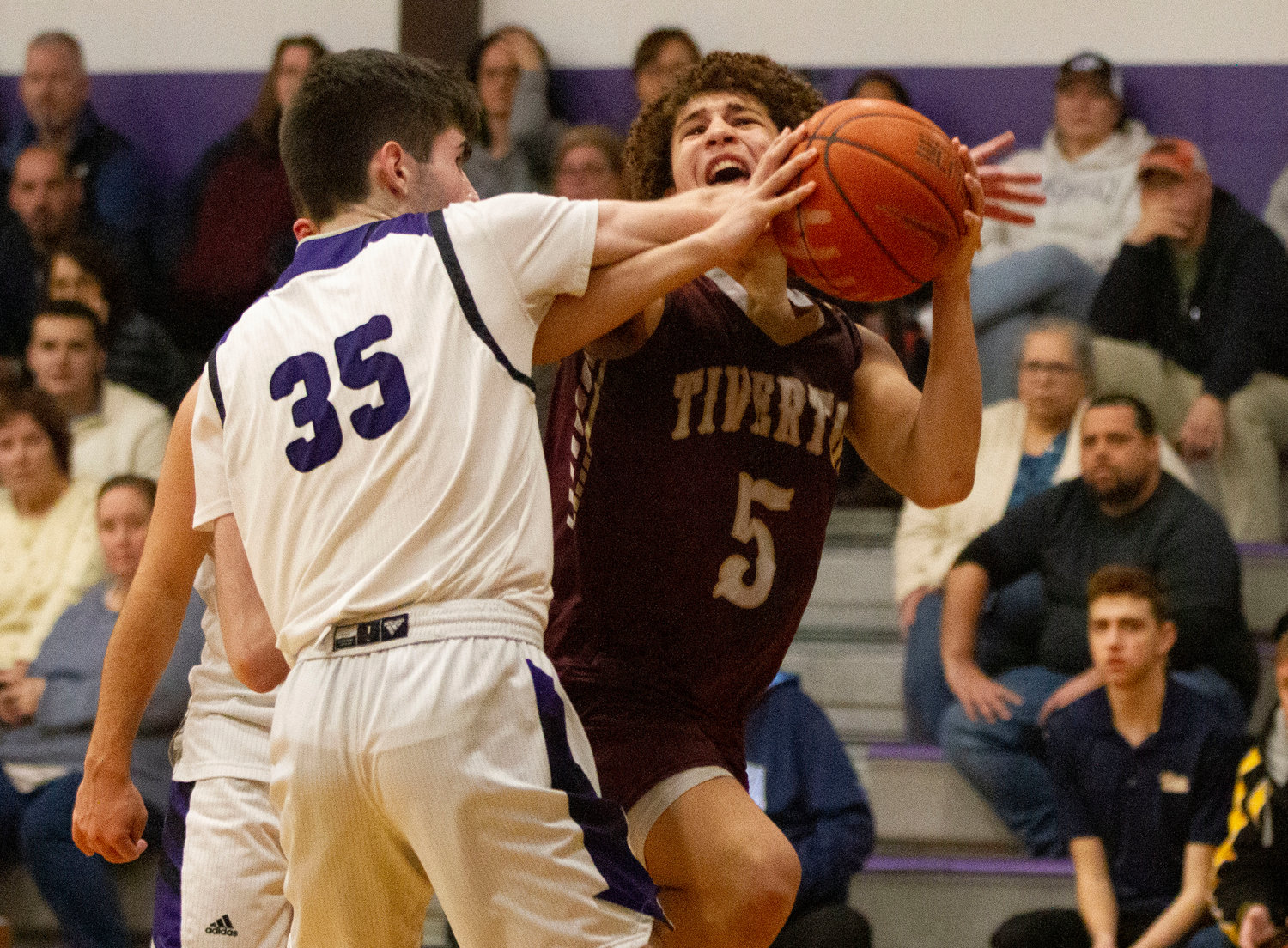 Tristin White is fouled by James Rustici as he attempts to get to the hoop.
RICHARD W. DIONNE, JR. 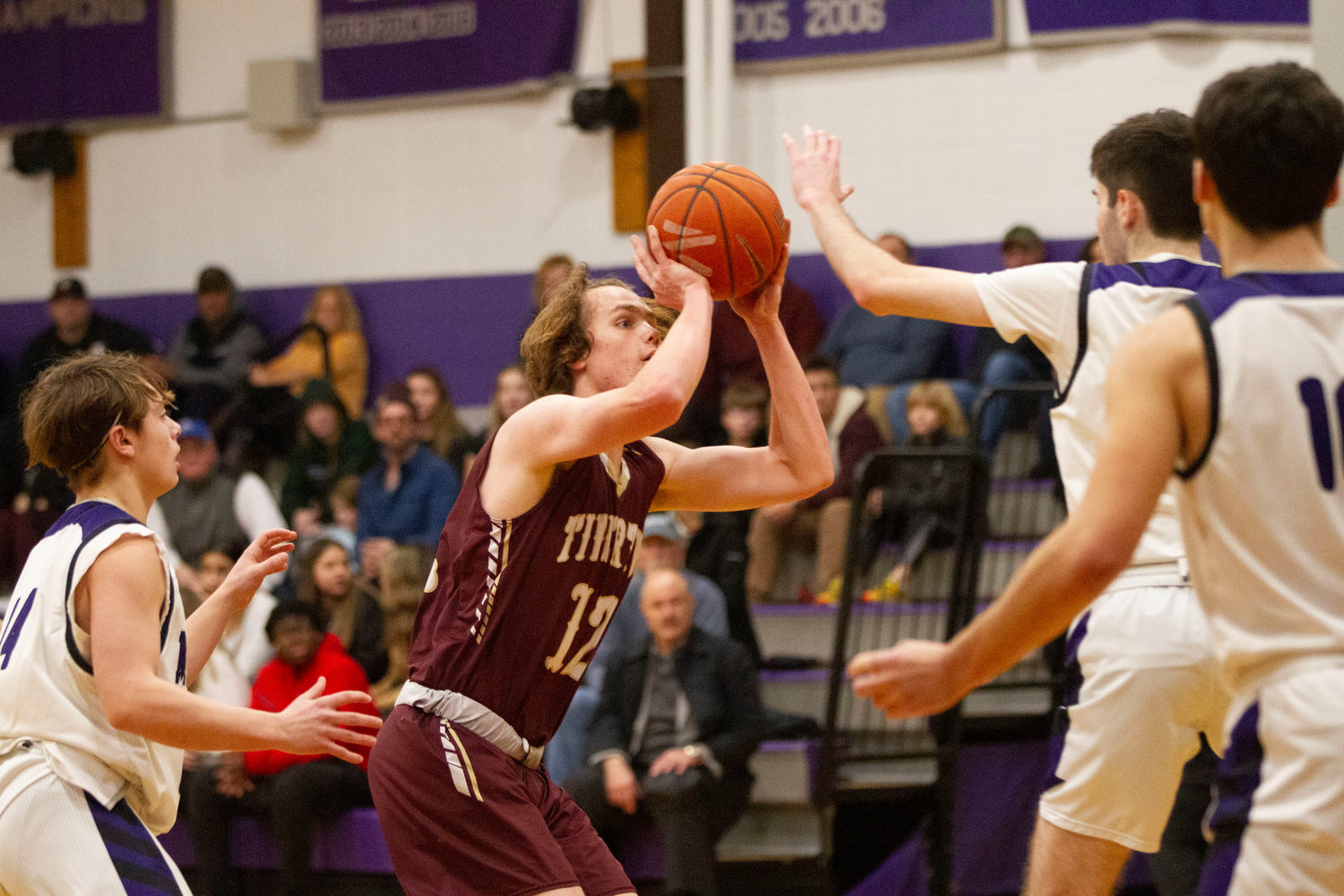 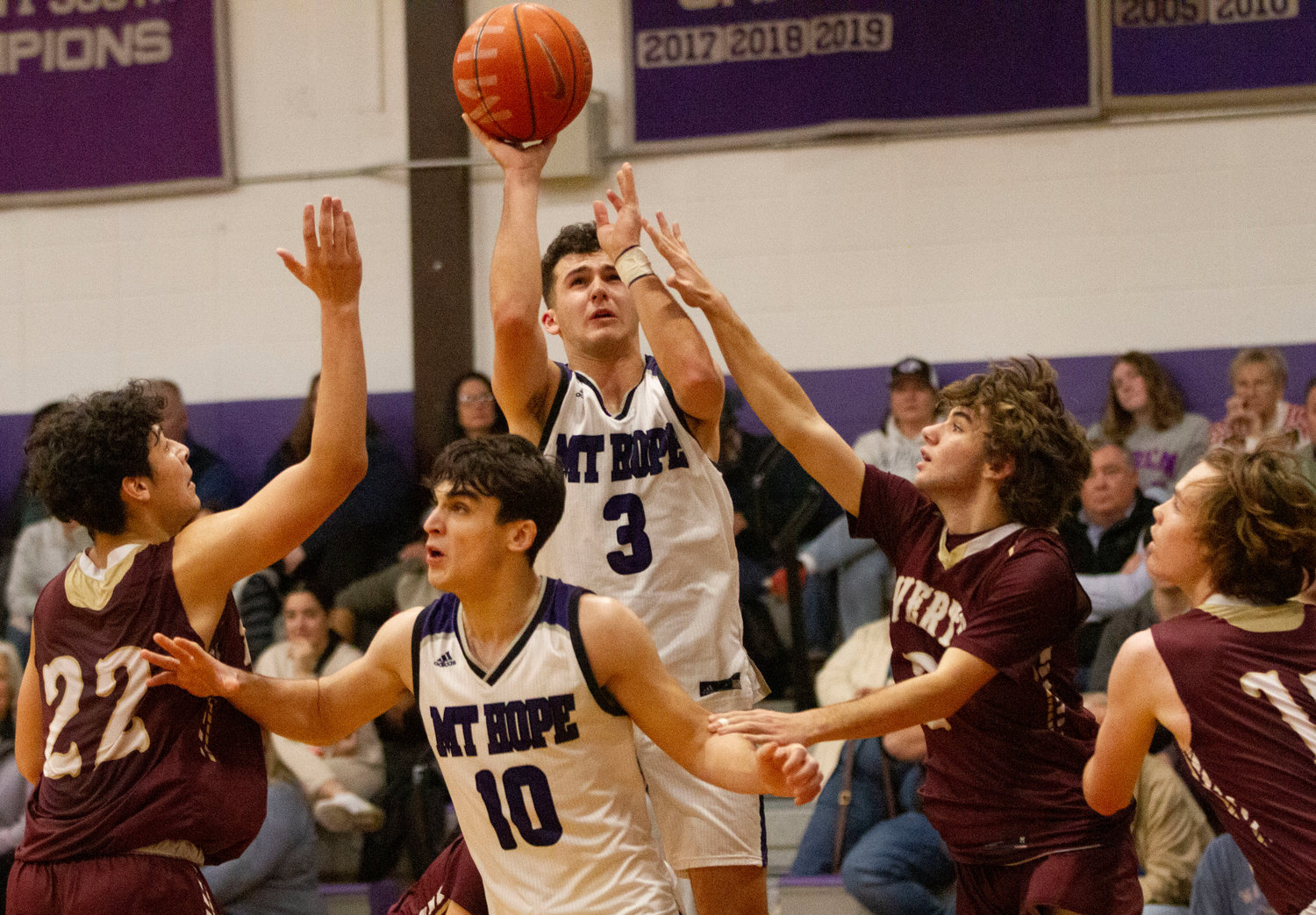 Ben Calouro looks to clear a path for Parker Camelo in the second half as Nate Sama (left) and Logan Bouchard defend the Tigers’ hoop.
RICHARD W. DIONNE, JR. 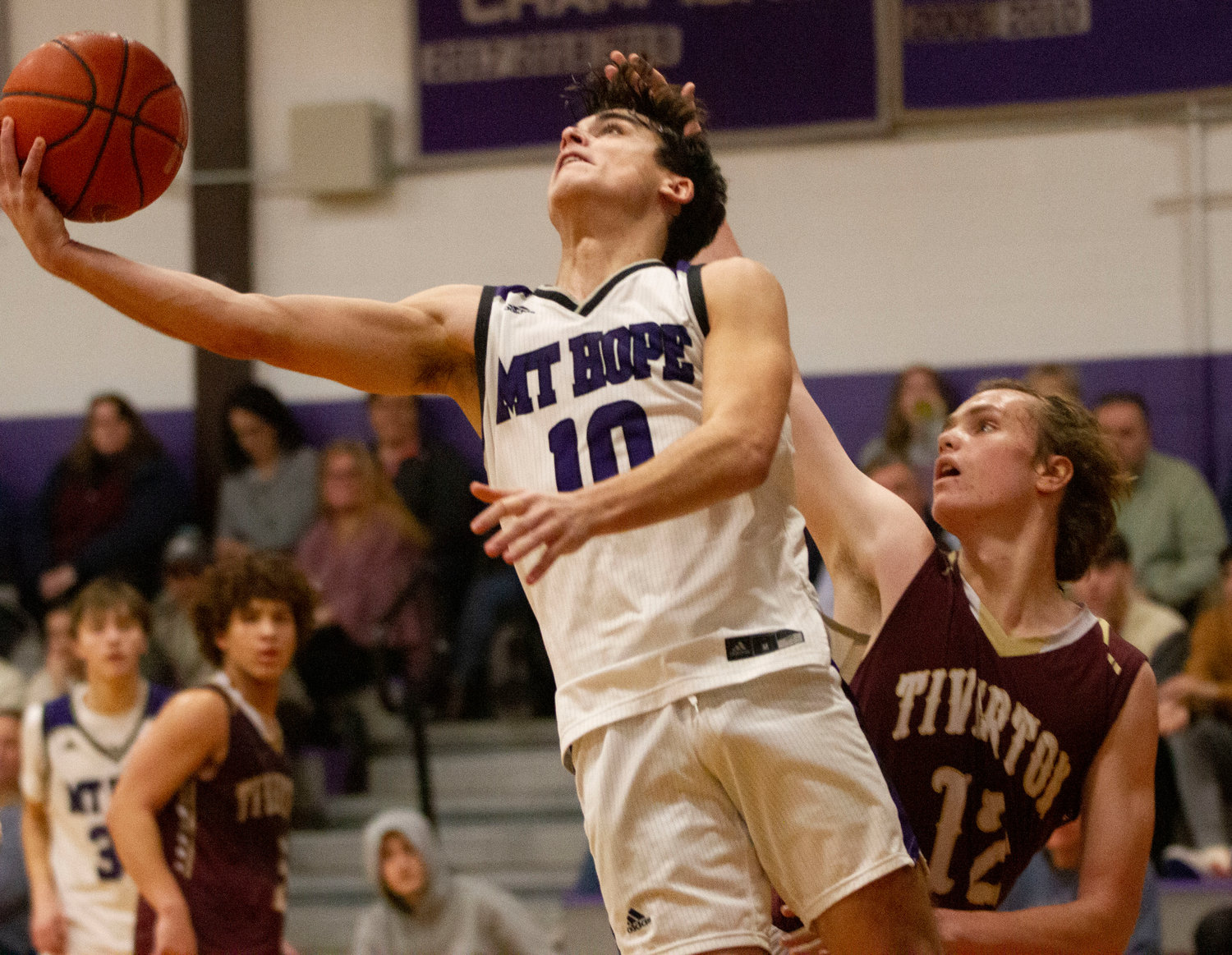 The win improved the Tigers’ record to 4-2 in Division II, while the Huskies fell to 2-5.

“The game was scrappy, both sides. I love playing Jeff,” said Tiverton head coach Dave Landoch, referring to Jeff Grifka, Mt. Hope’s coach. “He’s such a good coach. He always has his guys ready. He’s doing such a good job and it’s fun playing them.”

Eight players scored for Tiverton, who ran out to a 17-14 lead in the first quarter and led by more than 10 in the second. Potvin scored 6 of his 15 points in the first half mostly using his nifty close range jumper. The athletic senior center out-dueled Mt. Hope center James Rustici on the boards. Guard Tristin White scored 5 of his 13 points in the first half. The speedy senior consistently found lanes to drive to the basket and scored points off the Tigers’ fast break. Nate Sama scored 5 points, Ben Pacheco scored 4. Ben Sama and Logan Bouchard each sank a 3-pointer and Tyler Landoch and Ryan Poland each scored 2.

The Huskies kept pace behind the sharp shooting of guard Parker Camelo, who scored a game-high 19 points. Camelo sank three 3-pointers and scored 12 first half points as the Huskies cut the lead to 30-27 before the break. Rustici chipped in with 4 points. Sophomore guard Ethan Santerre sank a 3-pointer, Lucas Andreozzi sank 3 of 5 fouls shots and Ben Calouro sank a jumper.

“We have a lot of younger guys on the team and it’s their first year playing varsity,” said Calouro, a Mt. Hope co-captain. “They are still getting used to it, but they are starting to come around.”

“Camelo was killing us,” said Landoch, citing his team’s defense in the second half as the key to their victory. “He’s a great shooter, so we had to try to take him out of the game.”

The physicality ramped up in the third quarter as Tiverton’s defense zeroed in on stopping Camelo. The Huskies twice cut the lead to 10 points, but they ultimately couldn’t find a defensive answer to stop Potvin, who kept sinking his popup jumper as he scored 9 second-half points.

White terrorized the Huskies’ young guards into mistakes and racked up 8 points. Ben Pacheco added a 3-pointer as the Tigers out-gunned the Huskies 15-6 in the third quarter and 26-15 in the second half.

“The idea was to play a little high-low basketball,” said Landoch. “We had our guards try to penetrate more in the second half instead of settling for the outside shot.”

“I’m trying to get my young kids experience,” said Grifka after the game. “But at the same time, they can be timid.”

“We need to get more of us scoring,” said Calouro. “That’s when we’ll really shine.”

Calouro led the Huskies with 16 points in their 50-42 win over Hope on Tuesday. Lucas Andreozzi netted 13 with three 3-pointers and Rustici scored 10.