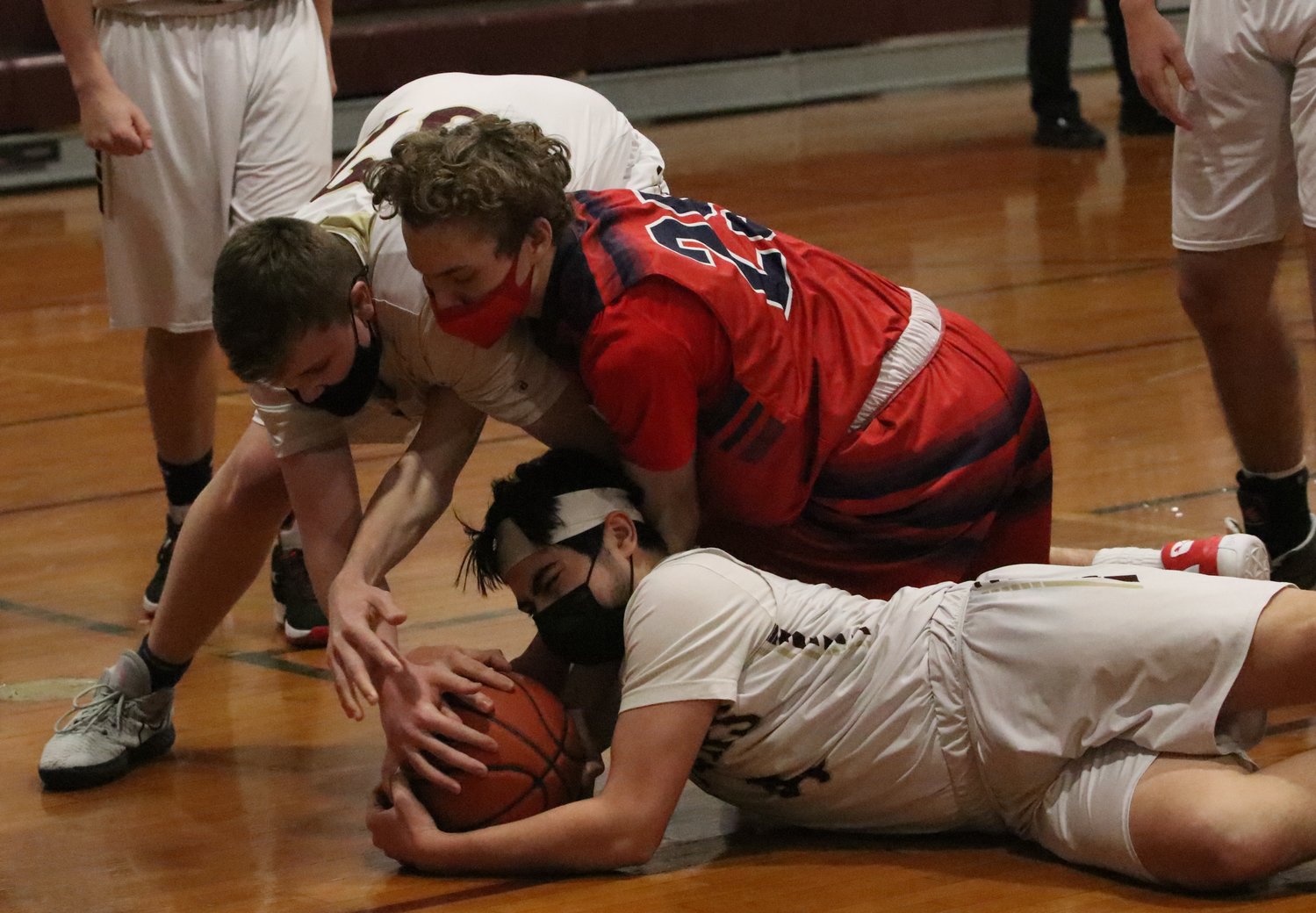 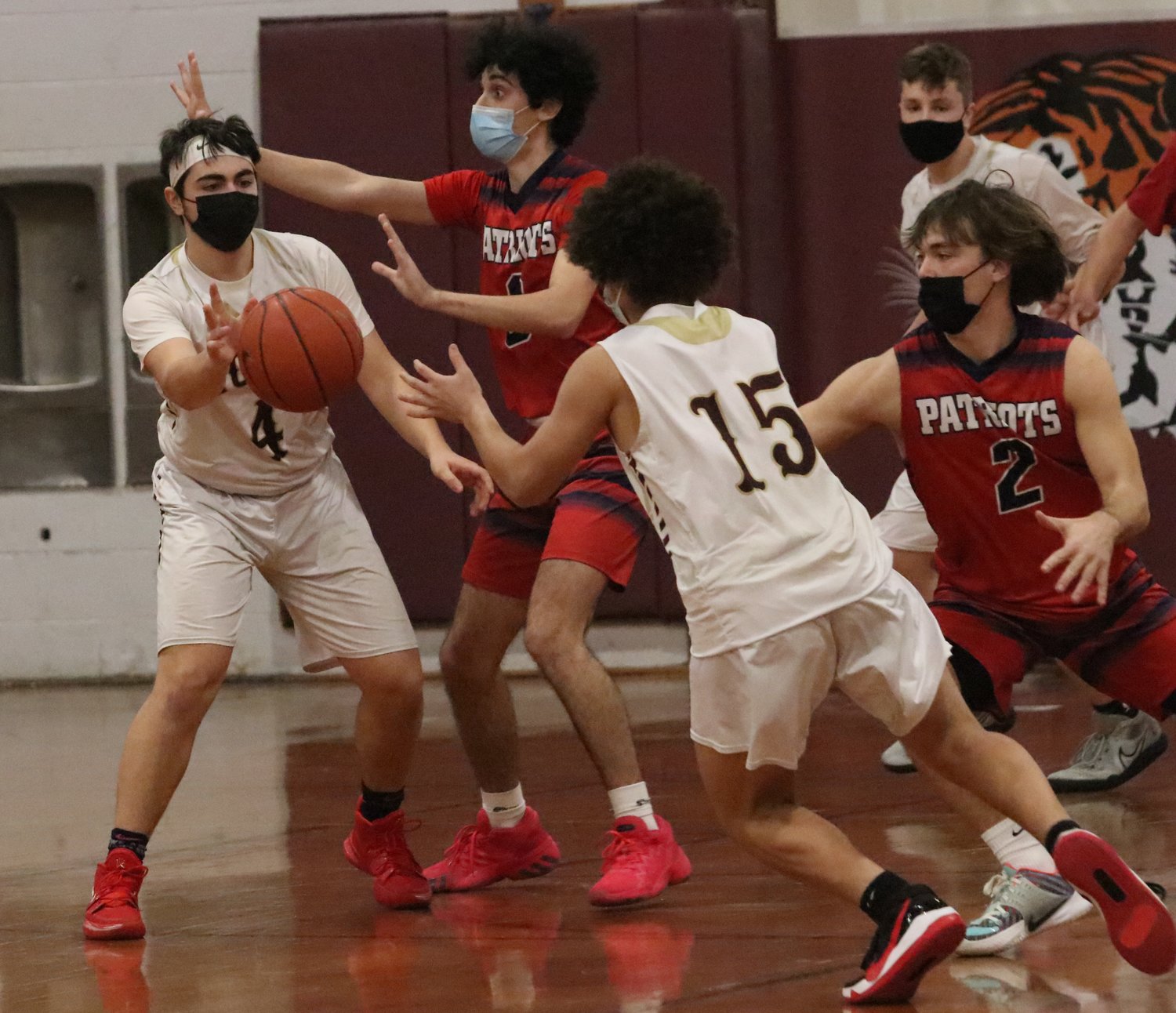 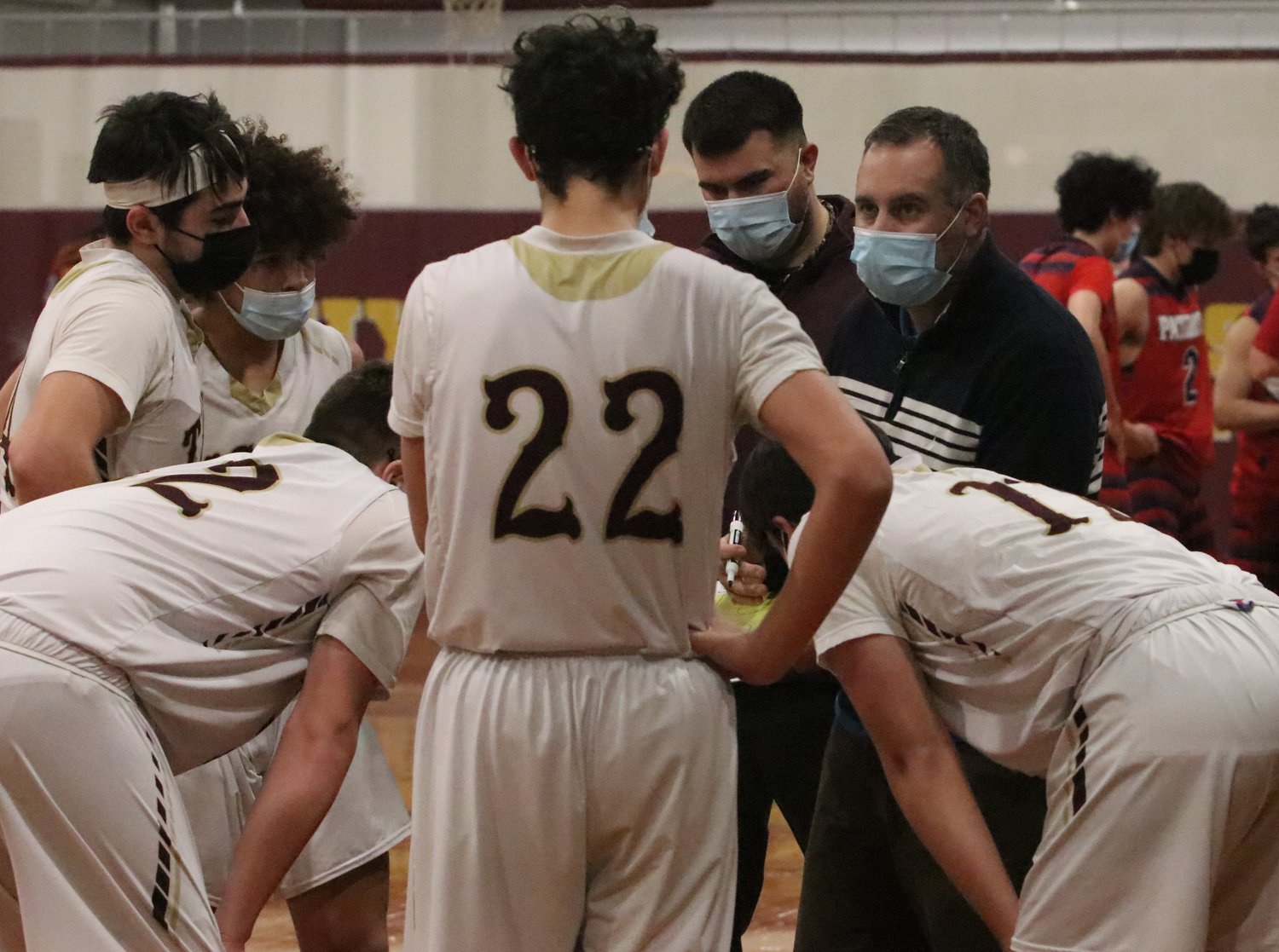 Head coach Dave Landoch talks strategy during a time out. 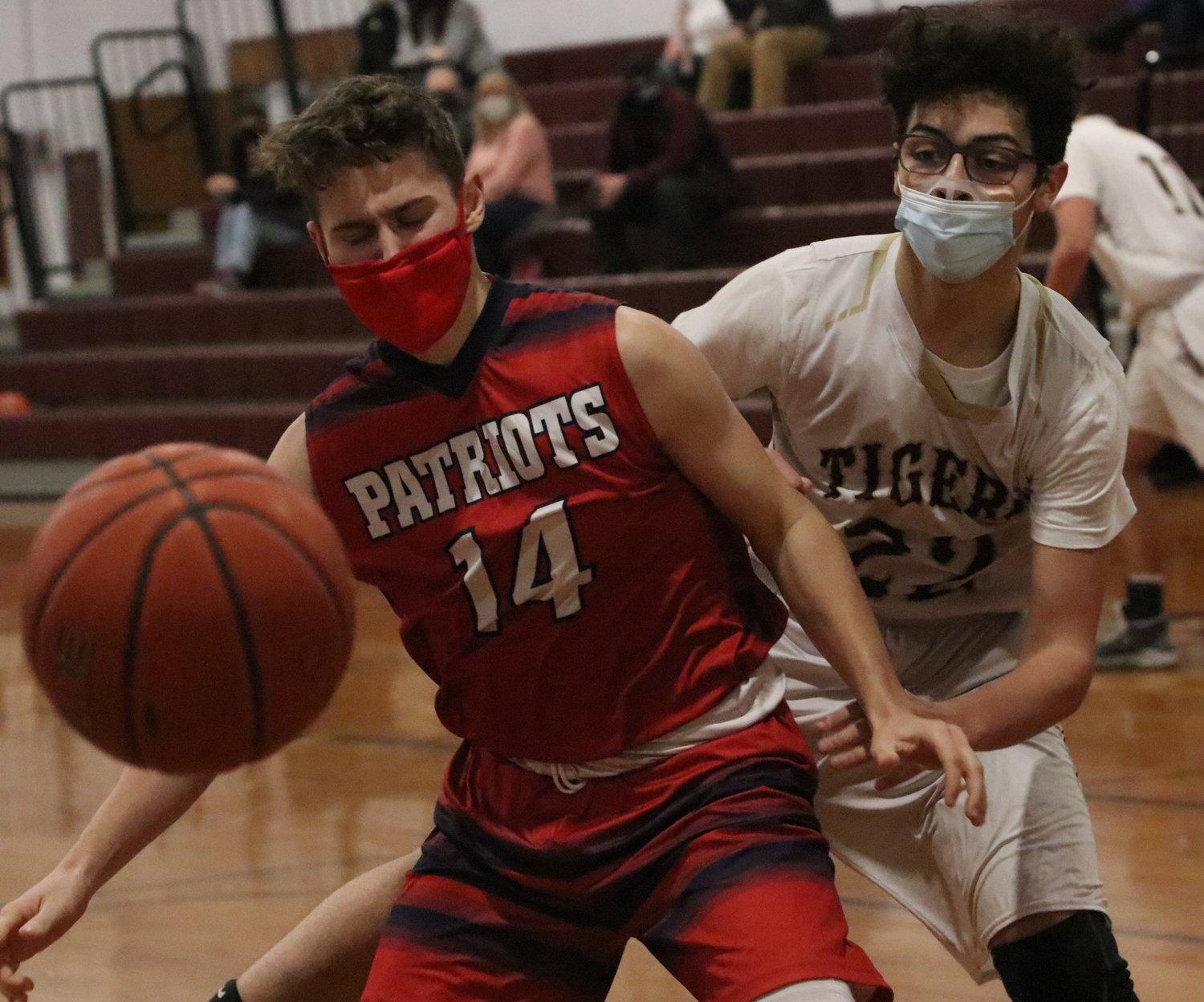 Sophomore forward Nate Sama punches the ball out of a Patriots' hands. 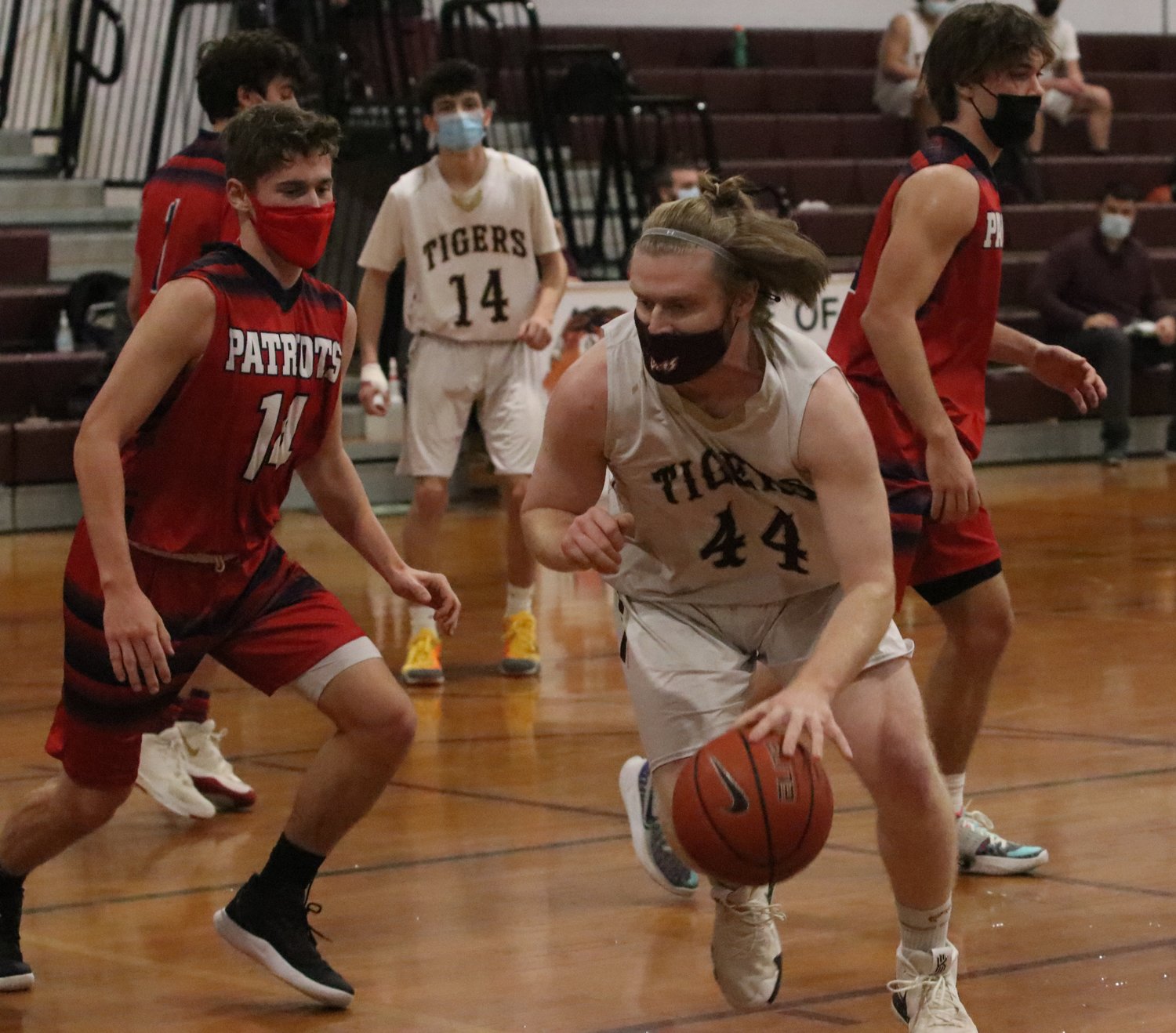 Senior Will Gerlach puts the ball on the floor and makes a move to the inside. 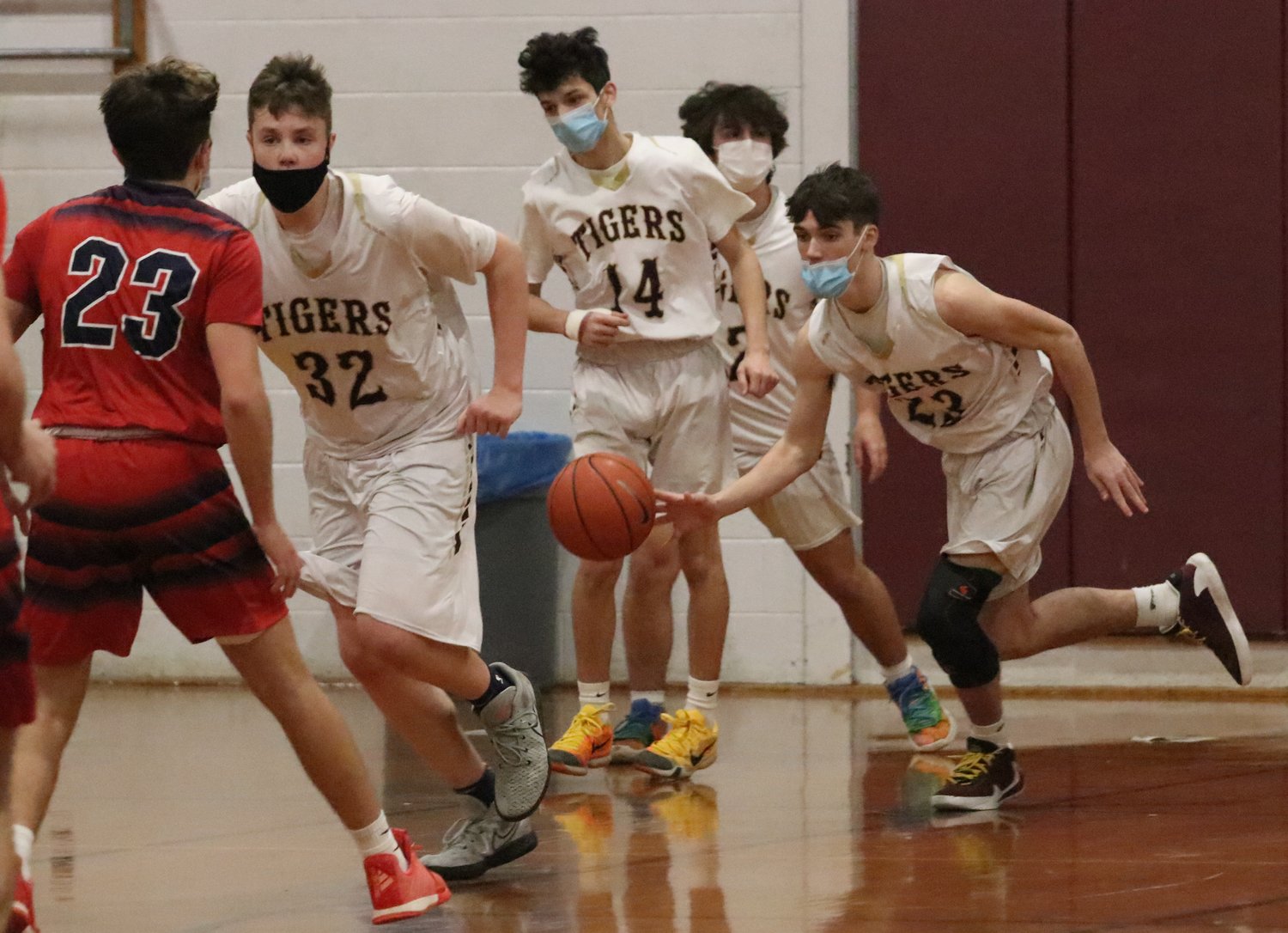 The team has been on a torrid stretch playing 4 games in the last 5 days, since their Covid-quarantine in January and it has been difficult according to head coach David Landoch.

“It’s been brutal,” coach Landoch said. “Our schedule has been very busy. Just too recover is tough. Once you come back from quarantine, you’re starting from scratch.”

The team has been trying to find a groove offensively. In practice they have been focusing on defense.

Two players had come down with the virus mid January. The team lost all momentum and had to quarantine for ten days. In order to play enough games, the team had to squeeze games into their remaining schedule. That resulted in players getting hurt.

“We only had a few hours of practice before game mode,” coach Landoch said.  Seniors, Shane Ramos, knee, AJ Vieira, abdominal, Mason Viveiros, thumb, Evan Torio, ankles, all have been injured and have missed action on the court.

“We were already struggling,” coach Landoch said, “but that made it worse.”

The team continues to get scoring from senior guard Jared Landoch, the coach’s nephew.

And senior forward Will Gerlach has been good off the bench.

“Will has been playing a lot of minutes,” coach Landoch said.

With many senior Tigers missing time, it’s given the young players a chance to play. The silver lining has been the underclassmen that have stepped up are starting to look like future players. It’s those future stars that have coach Landoch enthused.

Like junior guard Luke Deldeo.  “He has been my Steady Eddy,” said coach Landoch. “Luke’s has been a very consistent player. He gets his eight points and guards the toughest opponent on defense.”

The team’s biggest surprise has been sophomore point guard Tristan White who has been replacing the injured Ramos.

“We had thought he was just going to play a couple minutes a game,” coach Landoch said. “But Tristan has been playing the whole game. He is very aggressive and he doesn’t shy away from pressure. The injuries have helped him to get into the game, but he’s since being on the court, he has earned his playing time.”

“He’s one of the up and comers that I’m looking forward to working with,” coach Landoch said.

The Tigers will be allowed to spread out the remaining games as interscholastic league has extended the basketball schedule an extra week according to coach Landoch. It may give the seniors a little more time to heal up and get back into the games.