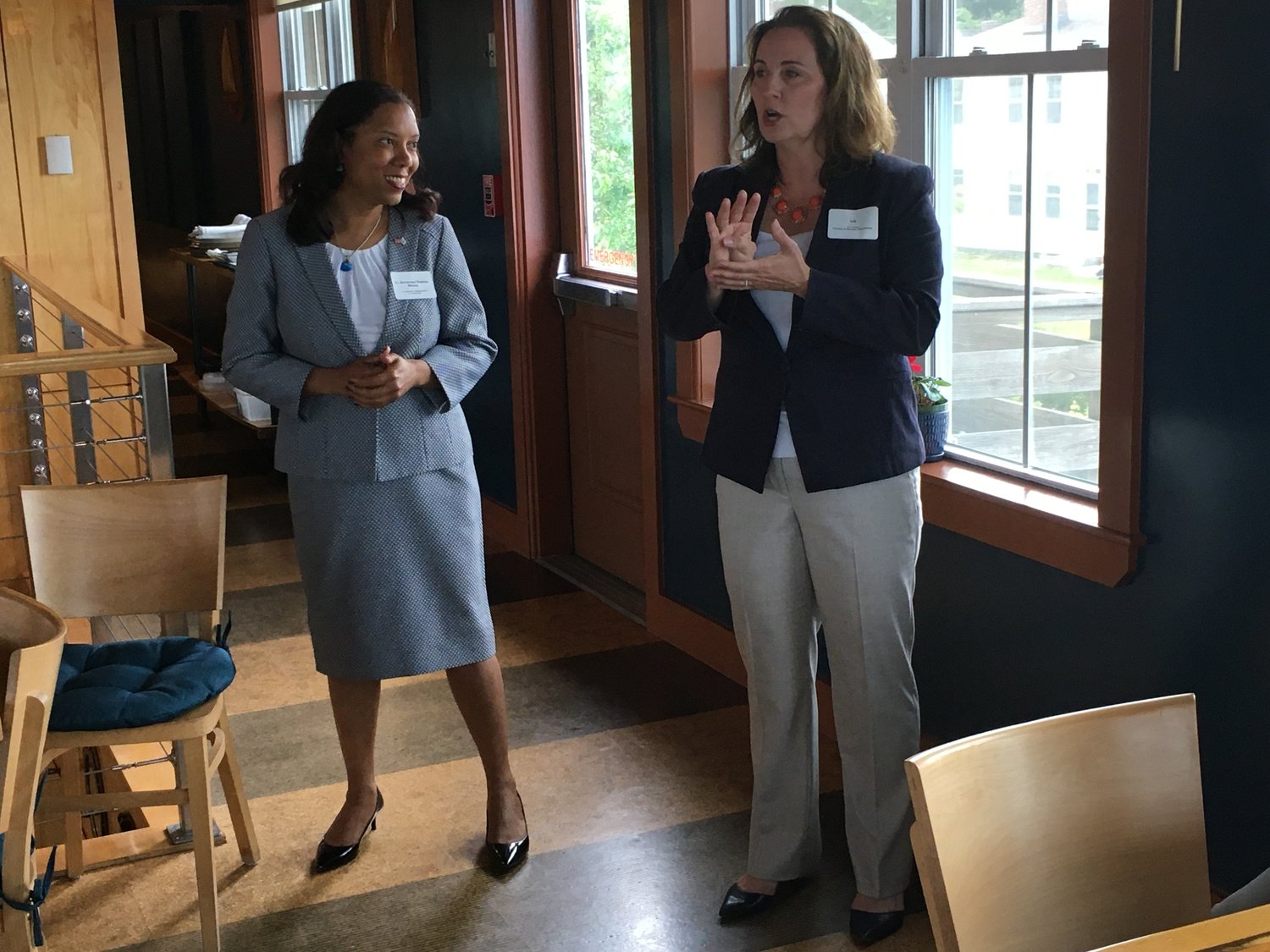 Lt. Gov. Sabina Matos (left) and newly appointed Commerce Secretary Liz Tanner (she wasn’t when this photo was taken, but she is now) answer questions from the audience during a “Coffee and Commerce” event at Trafford restaurant on Friday morning.
Posted Wednesday, June 29, 2022 1:23 pm
By Scott Pickering

On Friday, Bristol resident Elizabeth “Liz” Tanner met with a group of East Bay business leaders as director of the Rhode Island Department of Business Regulation (DBR). On Monday, she had a new job.

Tanner was named the state’s new Commerce Secretary and placed in charge of the Rhode Island Commerce Corp. Tanner was appointed by Gov. Dan McKee to fill an opening created when the state’s first commerce secretary, Stefan Pryor, left the position earlier this month to focus on his campaign for state treasurer.

Though Tanner was likely aware that the announcement was coming soon, she gave no indication during her hour-long appearance with the East Bay Chamber of Commerce. She and Lt. Gov. Sabina Matos mentioned the Commerce Corp. numerous times during the breakfast meeting at Trafford restaurant, but the focus was on the challenges for small business in Rhode Island, not on state-level staffing changes.

Much of the Friday dialogue focused on what has already been accomplished to improve the business landscape in Rhode Island. Tanner said that in her five years at DBR, she went to every Chamber, Rotary and trade association she could find, listened intently, and brought back long lists of complaints. Then she and her team looked into how to fix all of them.

“We’ve fixed just about everything we think we can fix,” she said.

She and the lieutenant governor shared numerous examples of the how they cleared up regulations, sometimes laws, and almost always processes, to make things simpler or more efficient for businesses.

Mimosas on Sunday
One example was the fact that Rhode Island restaurants were never able to serve mimosas during Sunday brunch, before noon. DBR investigated and found the root cause was an insurance issue. Insurers were unwilling to provide liability coverage for alcohol service before noon on Sundays. Asked why, the insurers said the state’s regulation was unclear — it did not say restaurants could not serve alcohol on Sunday mornings, but it also did not say they could.

“So guess what? We made the regulation clear, and it was as simple as that,” Tanner said. Now mimosas are part of Sunday brunches in the Ocean State.

Another example involved “frozen dessert” permit fees and regulation. DBR received complaints about special fees for any business with a slushy machine or soft-serve ice cream dispenser. So they looked into the origins and found that when the first slushy machines were introduced in the 1960s, they were made with copper tubing.

If not maintained properly, copper tubing could erode and emit acid into the food, so the state wanted a way to monitor who was using slushy machines and other frozen dessert dispensaries. Thus it created a permit that allowed for oversight and regulation.

“It made sense at the time, but once the world switched to plastic, we didn’t need it anymore,” Tanner said. Nonetheless, businesses went on paying the special “frozen dessert” fees every year, because no one bothered to question or change the regulation. So Tanner and her team fixed that, too.

Forms and filings
“My favorite process fix was the ‘Letter of Good Standing’ from the Division of Taxation,” Tanner said of the mandatory regulation for any business trying to open in Rhode Island. “It would take months and months … it was an absolute nightmare.”

She said they put that process through a “lean process” study, made improvements, and the state is now processing those in two to three weeks.

Tanner also talked about how licenses for real estate agents used to be 85% paper and 15% digital. Her office worked with the Rhode Island Association of Realtors to promote the opportunity for digital filings.

She added that 100% of the forms or applications with the Department of Business Regulation are now available online and can be submitted digitally.

Getting help
Chamber members had a few questions for Matos and Tanner. A couple people asked about how business owners can find all the resources or programs available to them.

“People ask me my number one piece of advice?” Tanner said. “I tell them to join something. Join a Chamber, join an association. Even if those people don’t know the answers, they know who to call.”

Staffing challenges
The two were asked about the hiring challenges in Rhode Island, where many business owners say they can’t find employees, despite only a 2.9% unemployment rate, lowest since the 1980s.

Matos said her office is looking into this problem. “One thing we’ve found is that, before Covid, some people were working two or three jobs, and after Covid, they’ve decided to reevaluate their lives and they’re not doing that anymore.” She also said affordable housing is a huge problem for low-income, part-time workers in the hospitality industry, especially in places like Block Island or Newport.

Speaking of staffing shortages in the restaurant industry, Tanner said, “The number one piece of advice we’ve had for businesses is to be kind to people … Please be kind to your staffs. We do believe that’s why some people haven’t come back. It was really hard work, and they were getting yelled at a lot. As a general rule, I think businesses can be kinder to employees than they have been.”

Late fees
On Friday morning, Tanner was proud to announce that the General Assembly, the night before, had passed a package of pro-business bills, one of which reduced the interest rate on late corporate tax payments from 18% down to 12%.

“There have been people working on this since the 1970s. I think 12% is still too high, but the point is, it came down. We’ve been working on that for a long, long, long time,” she said.

The package of bills also eliminated a $600-per-table licensing fee for every pool table located within a business. The regulation will now apply only to businesses with more than three tables. “That’s why there aren’t many pool tables in Rhode Island,” she said.

No to higher taxes
The lieutenant governor was asked her position on the possibility of raising corporate taxes, which current Secretary of State Nellie Gorbea, candidate for governor, has proposed in her first big television ad.

She was quick to respond: “I don’t like that idea. I don’t think it would be good to do that right now, especially since we have a surplus at the state. Why would we talk about raising taxes? I don’t think that’s the solution.”